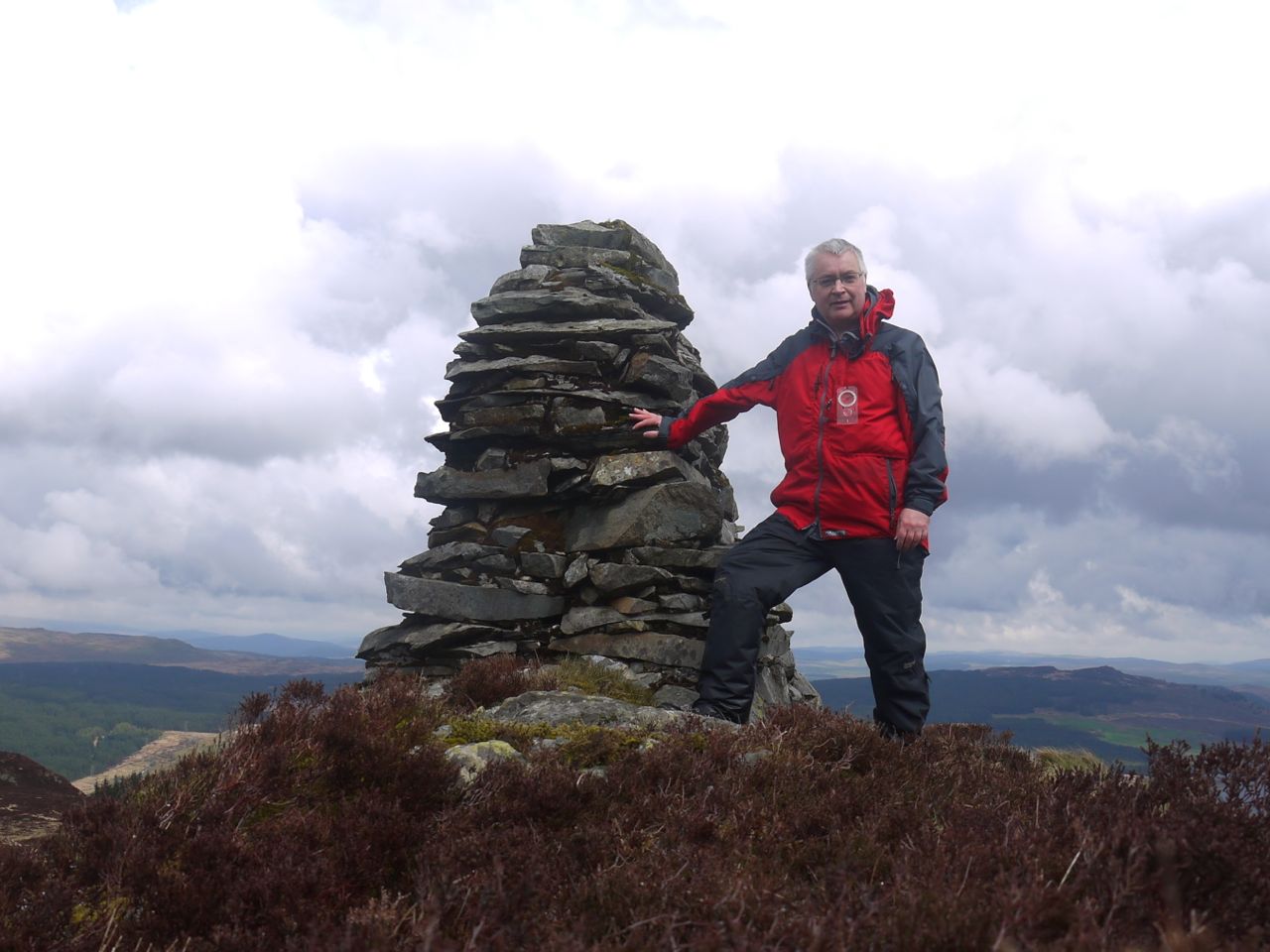 Then we set off again over two very desolate hills that have for names, as Sammle told me, Craignell and Darnaw. We were high up on them and keeping the crown of the causeway, the brown moors and grey rocks running from horizon to horizon beneath us. S. R. Crocket, The Raiders 1894

This is a walk I had had in mind for some time, but I wanted to save it for a day with nice weather. Impatience got the better of me though so I set out in rubbish weather. The descriptions of walks for this hill tend to start to the NW at Craigencallie, but I fancied trying a different approach from the SE, climbing the steep southern slopes of the plateau.

There is a large quarry about a quarter of a mile from the SW tip of Clatteringshaws Loch with plenty of space to park a car nearby. The track up to it from the loch was a very stony and irregular so on the drive out I used the forestry track that joins the A712 near the 192m spot height.

I climbed out of the car into very light rain and considered waterproof trousers. I recalled the line from the film Ronin, “If there is any question, there is no question” and got fully togged up for the rain. Before I had my rucksack on, my decision was proved correct and I spent the next hour or so in drizzle. 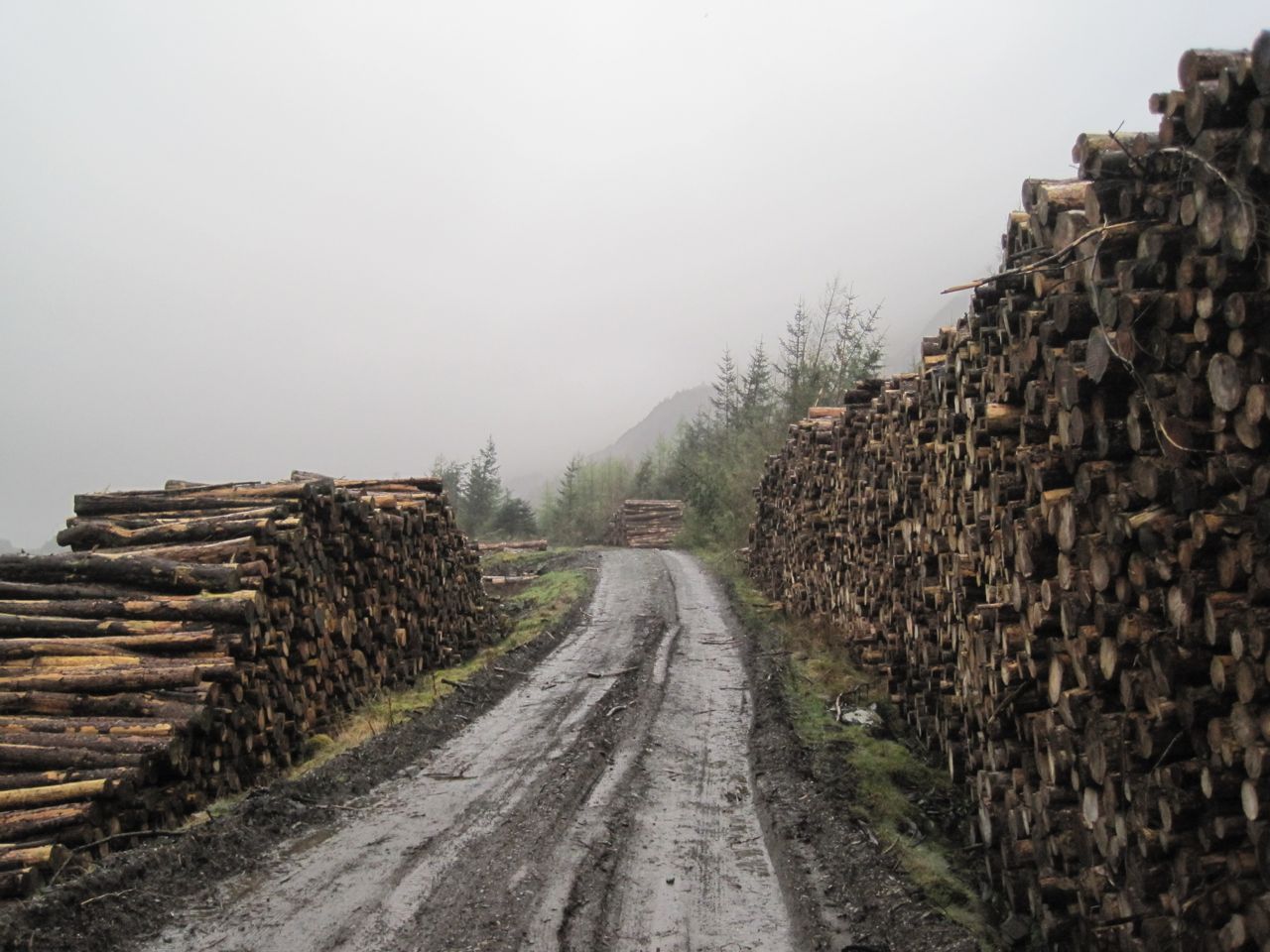 From the quarry I headed west along the forestry track for about 250m where I reached the end of the trees. My plan fro here was to walk across the felled forest to wherever looked the best route up the slopes of Low Craignell. The visibility meant I couldn’t see the slopes clearly, but another tempting option presented itself. A gravel track led up the edge of the forest which spared me the unpleasantness of felled forest terrain. This turned right below Winter Hill so I left the gravel for the hillside and started my climb. 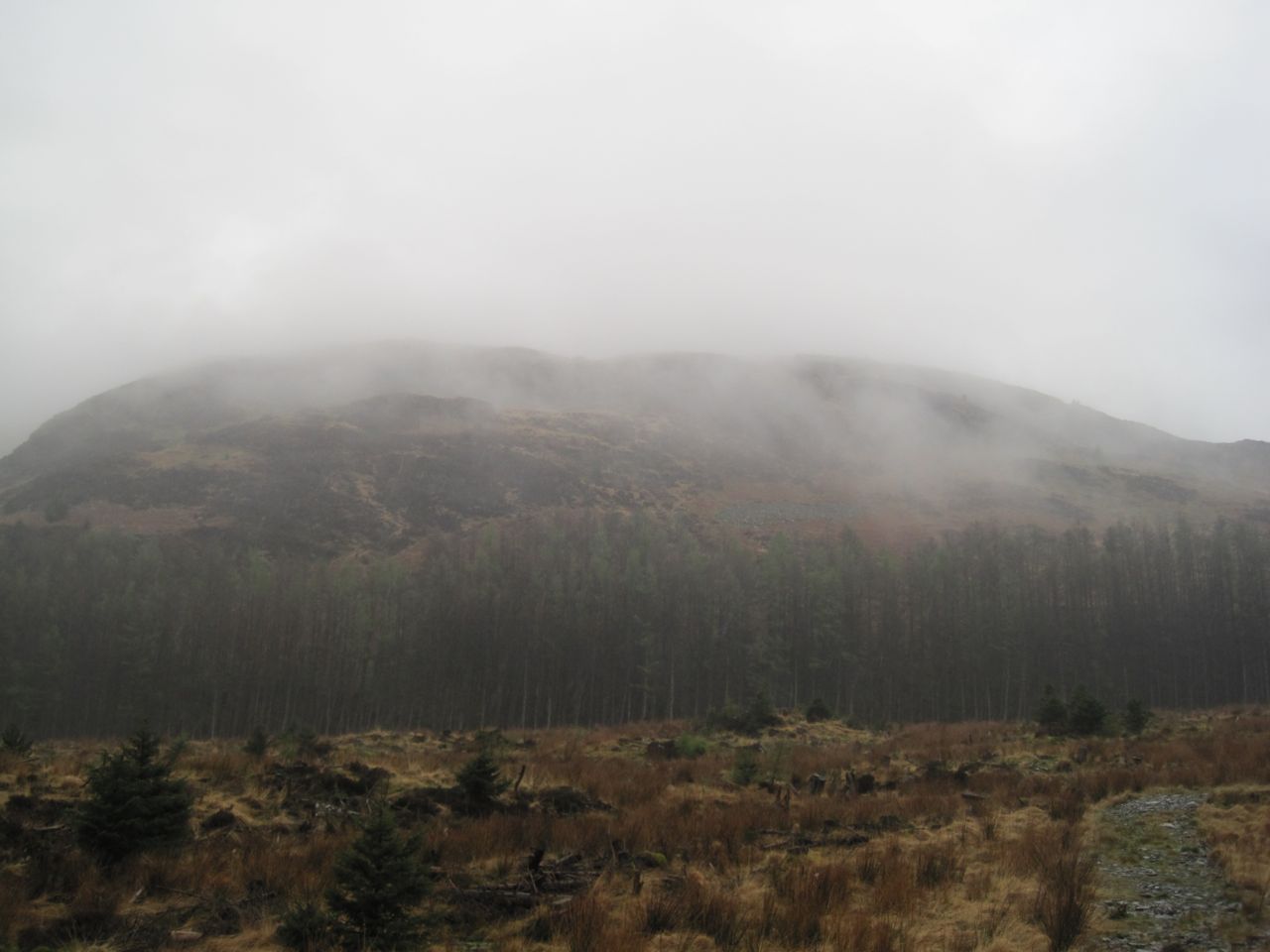 Once off the track I was into cloud and visibility was very limited so it may be that there are easier routes up that I couldn’t see. The steeper sections did sometimes amount to scrambling (using hands and feet) and the ground was friable, often slipping away despite holding on to heather. Less steep sections were covered in tussocks with blades of old growth that covered holes, held pools of water and got tangled around my feet. I have no idea why, but I checked the time (10.40am) when water first entered my boot as my foot first into a hidden pool.

I had thought there would be a defined ridge running from Low Craignell to Craignell, and looking back later in the day, there clearly is. In the poor visibility however, there was no obvious direction to the terrain. I found myself amongst rocky hillocks in all directions so the best I could do was to presume the high point I had reached was Low Craignell and follow a compass bearing. That was easier said than done.

The visibility was sometimes very poor and is was difficult to find anything identifiable to hard towards. I’d choose a rock but glance down to check where I was walking then look up and see several rocks that could have been my target. Some hillocks had steep drops so I had to find alternative routes and the ground between these higher points had pools of water or waterlogged tussocks that prevented me talking a direct line. 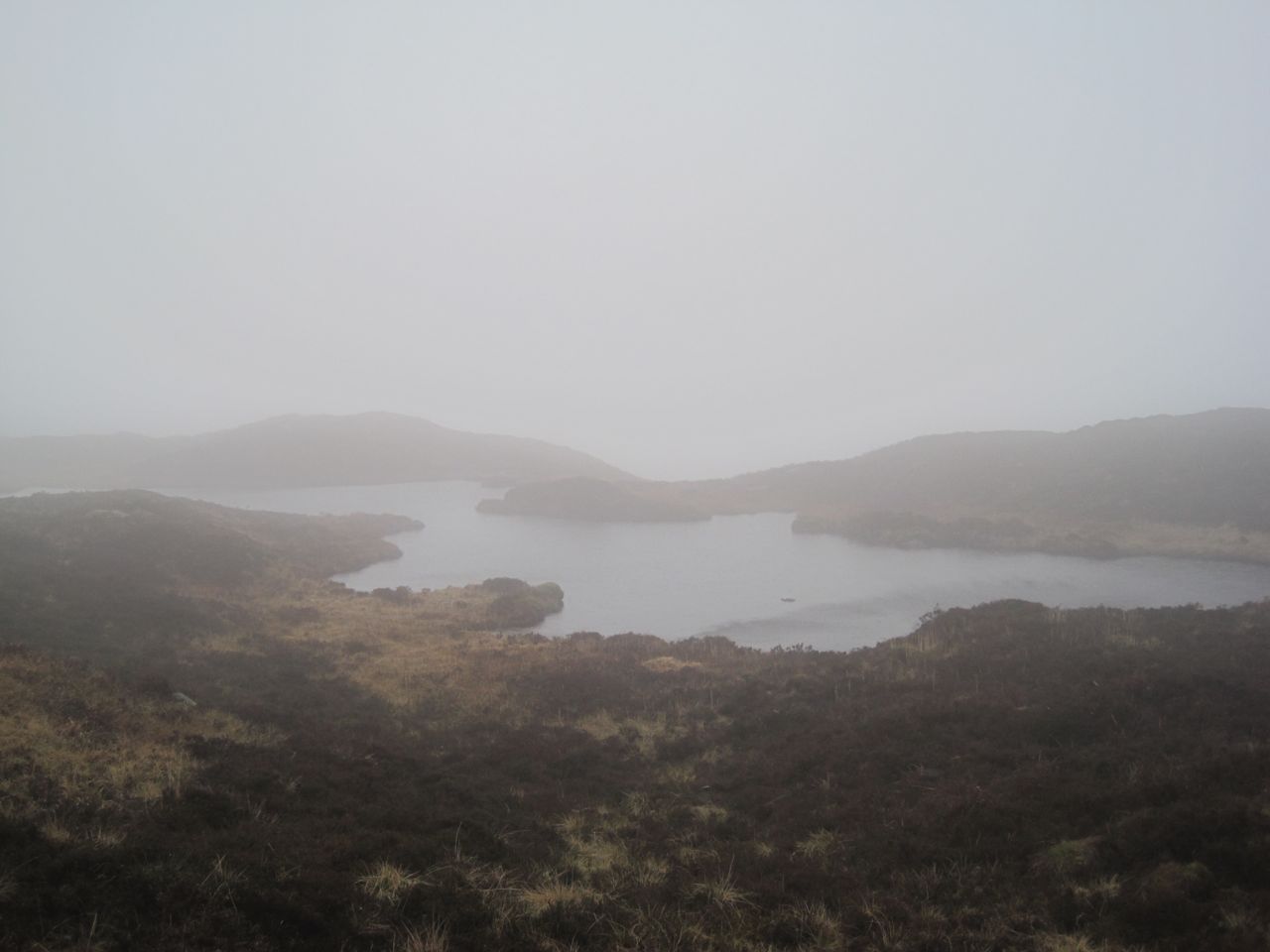 In the mist the wee hillocks looked like massive hills. I would find my way blocked by a massive hill and start the long slow climb up it, only to find it was much smaller than it seemed and I was at the top in no time. Unfortunately there are no easy targets to aim for. The lochans are too numerous to be sure which is which so all I could do was continue in the same general direction and follow the higher ground as it turned towards Craignell’s summit.

At this point I didn’t think it was likely I would have much fun finding Darnaw, so decided to review the route options once I got to Craignell, either retracing my steps or continuing off the SW slopes of Craignell. I was helped by a very brief improvement in visibility that showed me the silhouette of Craignell just to my left, and that allowed me to adjust my direction. Otherwise I would have continued until the hill started to fall away and then turn.

I made my way between three pairs of lochans and kept climbing. Eventually I spotted a cairn ahead and made for that. Beyound it the hill sloped away and I presumed, incorrectly, that this was Craignell’s summit. I relaxed having bagged another local Marilyn, found a flat stone on the cairn and sat down to consider the rest of the walk with the help of a coffee and chocolate bar. 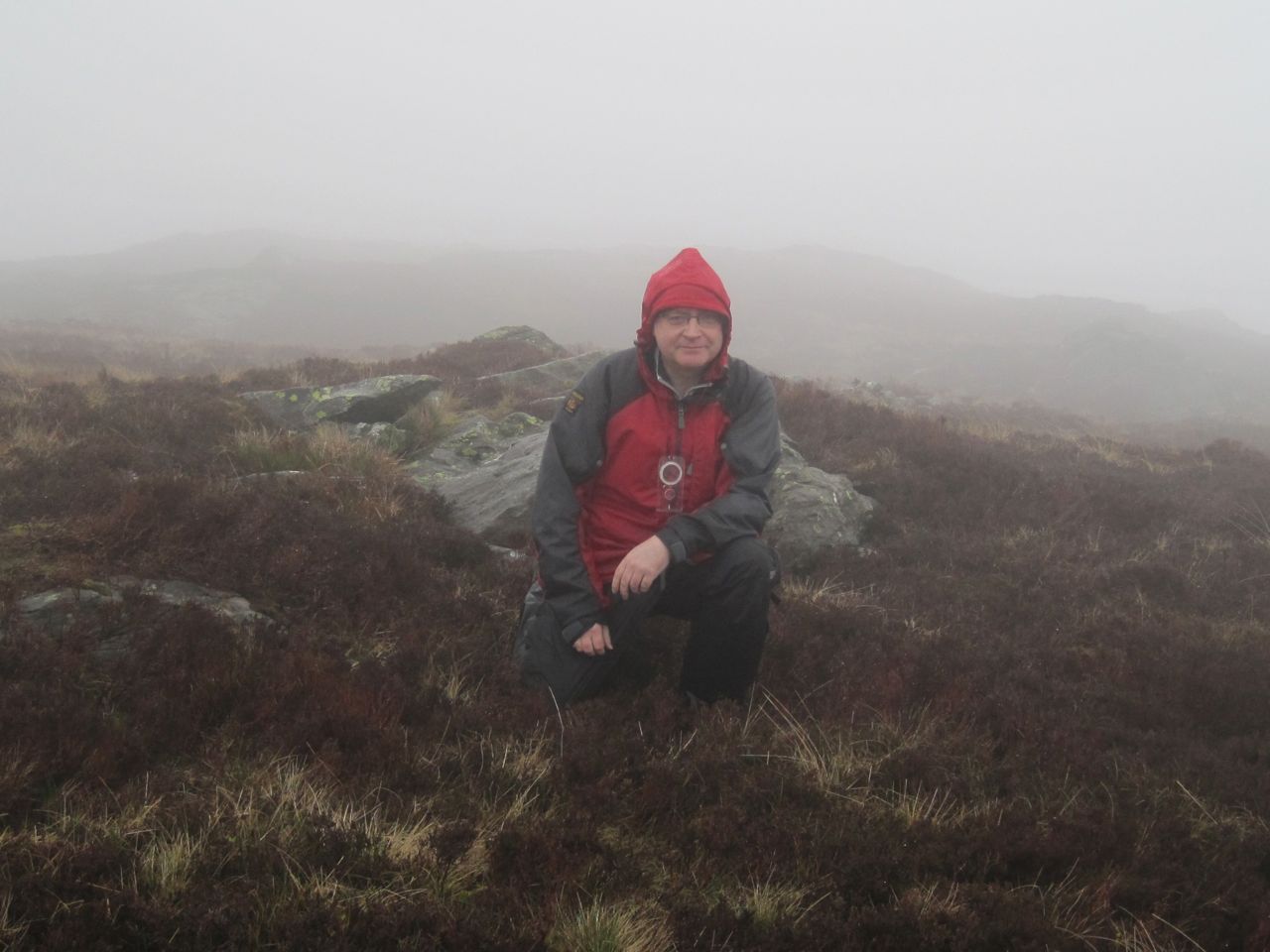 Sitting in the mist, coffee in hand, the mist in front of me blew away showing a steep drop ahead of me and sun drenched valleys either side. By the time I had the camera out, the mist was back, but over the next five minutes it happened twice more and I was able to get some pictures. More important, the cairn was not the summit. I had actually walked over the highest ground to reach the cairn that marks the end of the top rather than the summit. 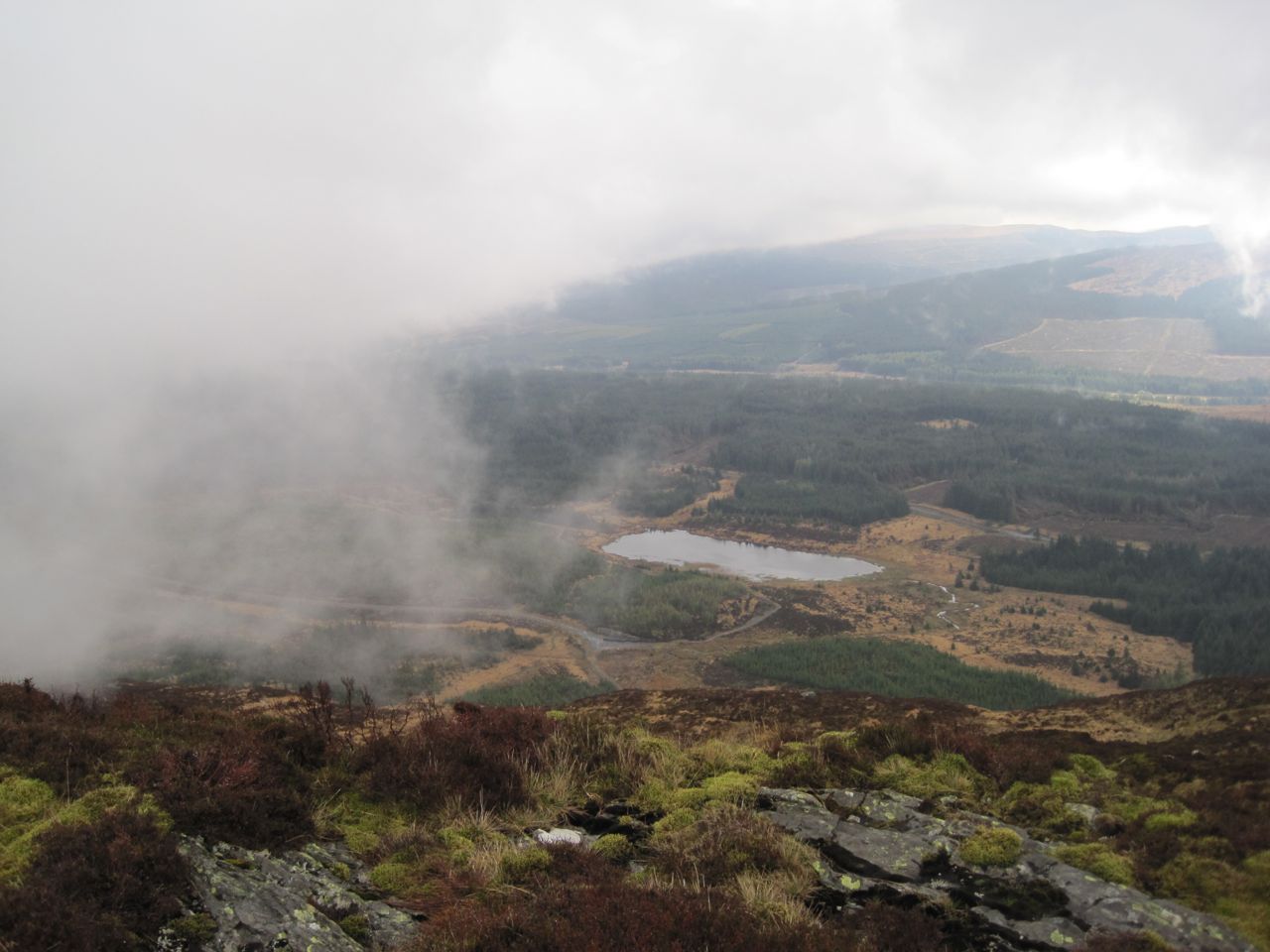 lillie’s Loch below Craignell, in a break in the cloud

I decided to head back the way I had come for 20 minutes (of slow terrain) and the turn north for Darnaw. I presumed that would be about the eastern end of the 450m contour. The visibility gradually improved. When I reached the fence posts of the dip that lead to Darnaw Burn, I could just see Clatteringshaws Loch and within the next few minutes the cloud had lifted altogether. So once out of the dip I could see Darnaw ahead and look back to Craignell, and even the hills beyond it.

A couple of sizeable lochans lie just before Darnaw, and rather than walk between them I skirted them staying in the rocky outcrops so I could have better views of the Loch. Darnaw has a small cairn at its summit and it had some flat stones to sit on for lunch. The clouds continued to rise, revealing Millfore’s summit, the Dungeon Hills and Meikle Millyea. I had wanted to leave this walk for good weather and I suppose I had it in the end. 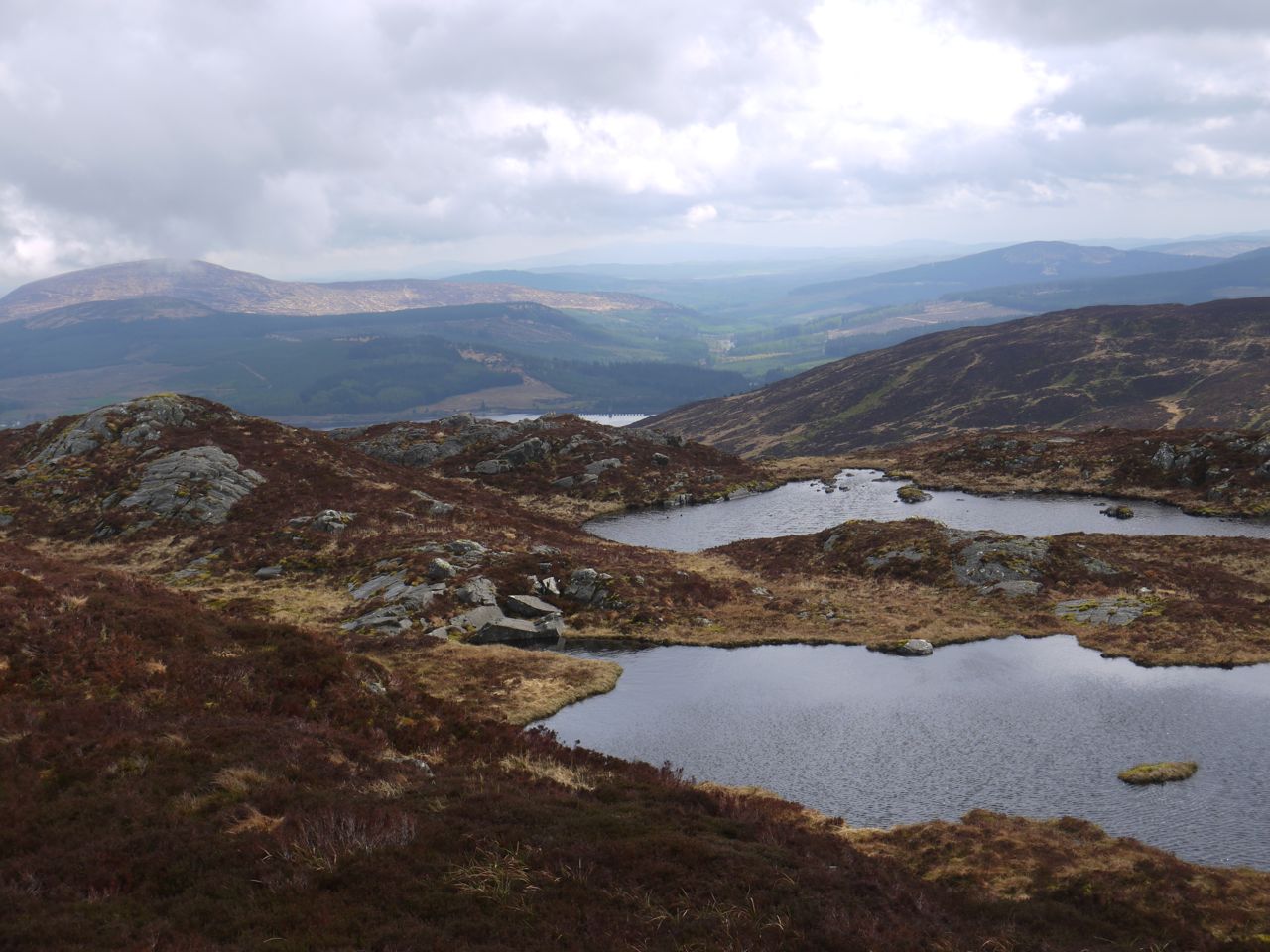 From Darnaw I could not see the Dragonfly monument so headed off on a bearing and soon came to it. This monument commemorates the four men who died when DH.90 Dragonfly G-AEHC crashed on Darnaw. The inscription reads:

In Memory
———–
Here fell the
Daily Express Airplane
Dragon Fly
On February 2nd 1937,
with the loss of
four brave men.

I presume the inscription’s reference to “Dragon Fly” rather than Dragonfly (which was the aircraft type) is an error. Details of the crash can be found here. It is strange to reflect that my parents were alive when this airplane was lost the wreckage was only found by chance two days later. The shepherd who found it had to walk off the hill and then ride 16 miles on his bicycle to inform the police. I can’t help thinking of the Dragonfly as an ancient aircraft, but at the time of this crash it would have been a brand new state of the art craft. In fact it had only been registered on 9.1.37. The same goes for the Avro Anson dispatched to search for it (which also crashed). I think of the Anson as a museum piece but it too would have been a new reconnaissance craft. There is an rocky area without any vegetation just near the monument and I presume this is the crash site but no wreckage remains 77 years after the event. 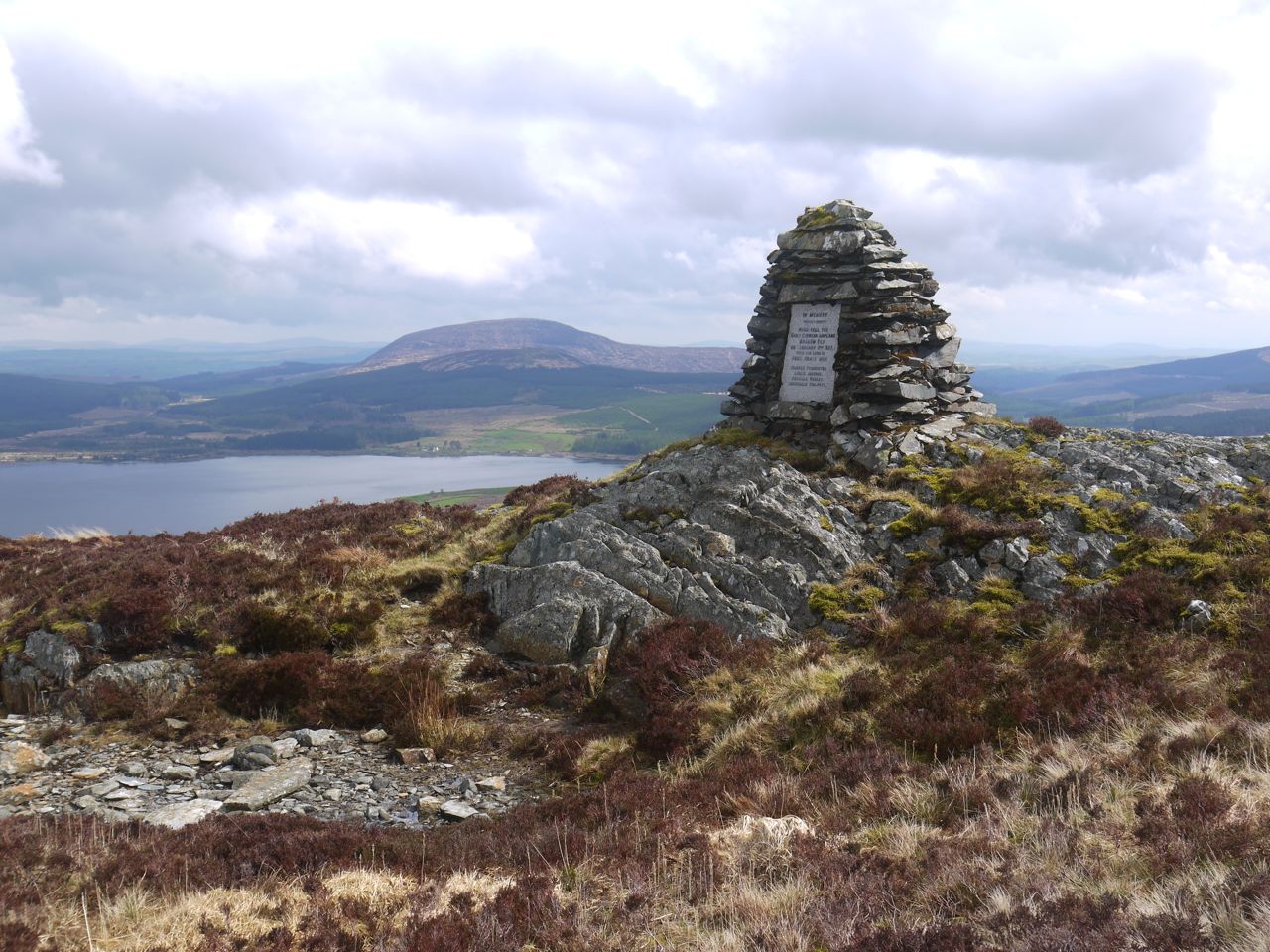 From the monument I had planned to head eastwards to a wall or fence (if it still existed) and follow that towards Darnaw Burn. On the way down though I could see some paths/tracks near the burn so just headed directly towards them.

This descent was interesting, and slow. The initial descent off Darnaw was easy enough over heather but closer to the trees the ground was boggy with difficult tussocks hiding pools of water. After this there was a section of old felled forest with tree stumps, dark pools of standing water (depth unknown), boggy moss, twigs and branches that sometimes snapped swallowing a leg like a tiger trap, audible but unseen running water, and new growth bushes and trees. I did spot a mouse as well. I just took it easy and meandered about avoiding the worst of it. 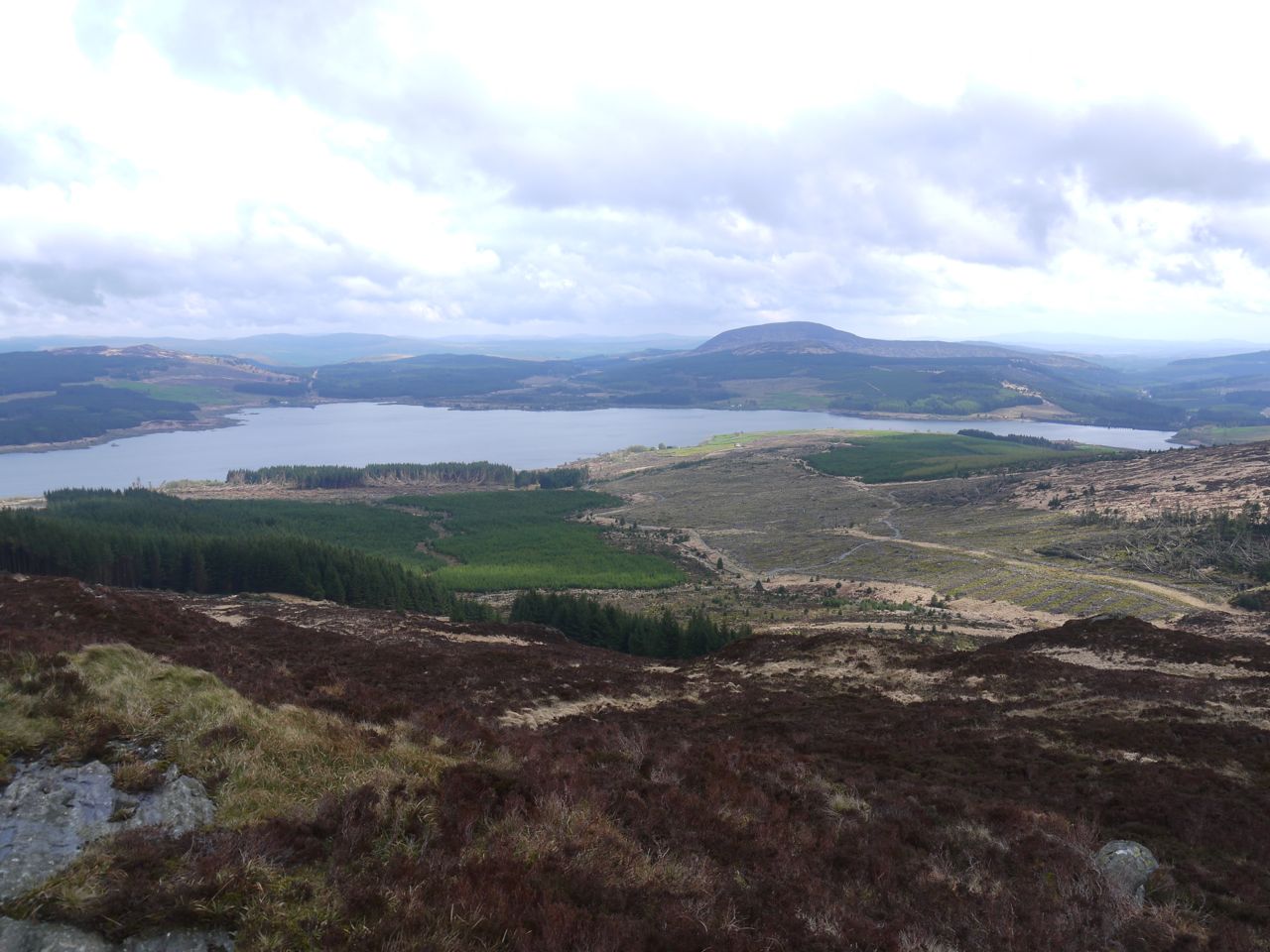 Soon enough I was at the Darnaw Burn which was easy enough to cross. All this time I had been heading for a grey path on the far side of the burn which led to a definite track. Once across the burn I couldn’t find the grey path and realised it wasn’t a path but  a collection of old branches. I presume these were laid down by the forestry when harvesting to support tracked vehicles. Unfortunately they were not easy, or safe, to walk on. Instead I squelched through boggy tussocks that must once have been a forest break. This took me to a gravel path. This section of felled forest was only short, 500m perhaps, and the sun was by then shining, so it didn’t sap my good humour. 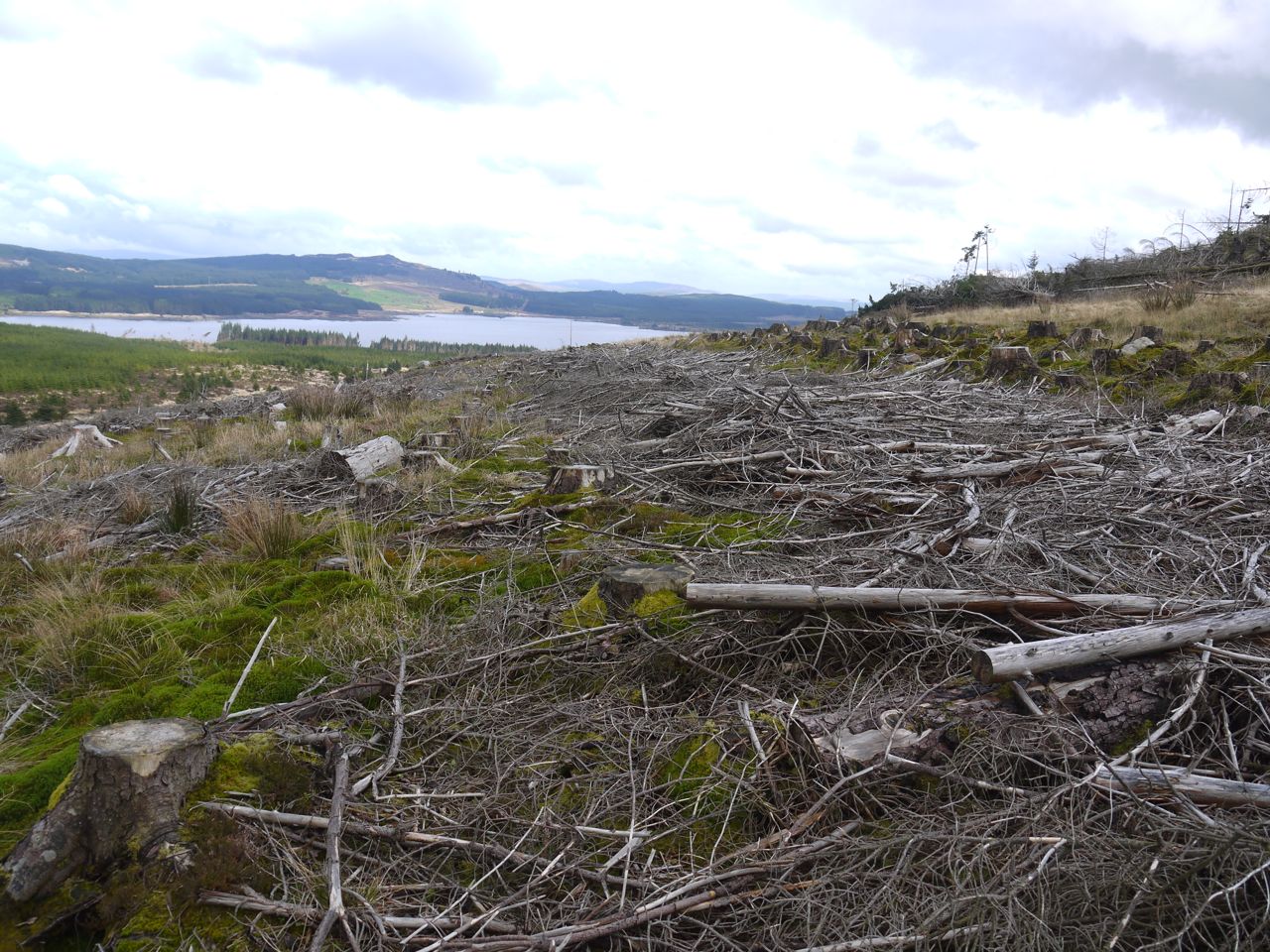 The gravel path was welcome. I don’t know why it is there. It is not wide enough for vehicles and doesn’t look to have been much used, with grass doing its best to reclaim it. There were good views across Clatteringshaws to Cairnsmore of Dee, and back to Meikle Millyea, now with its summit cloud free.

Share this...
This entry was posted in Dumfries & Galloway and tagged Spring, Wee Hills. Bookmark the permalink.