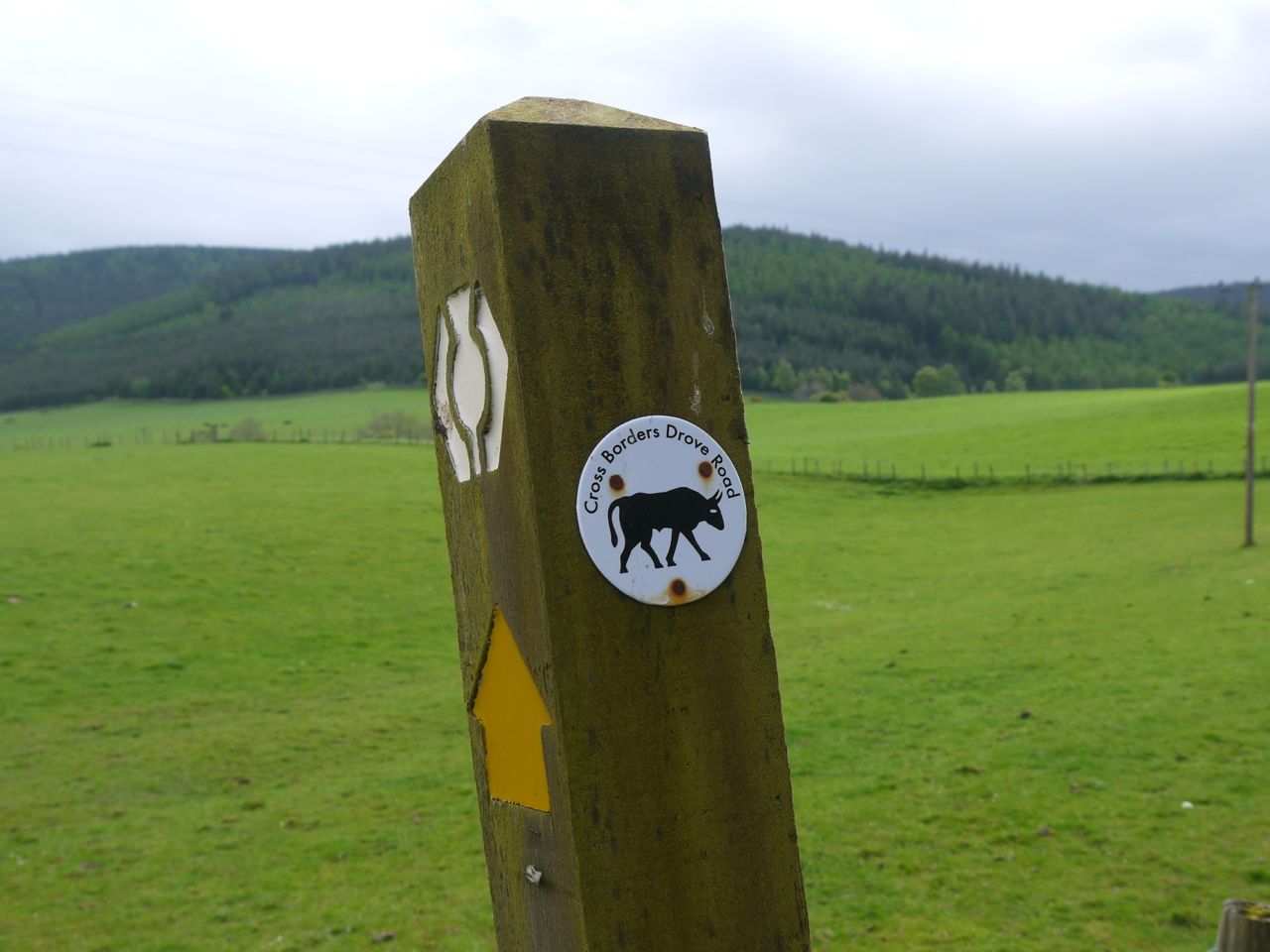 Route: SUW Traquair to Gala with a diversion to Minch Moor’s summit

For much of this section the SUW followed an Old Drove Road and there were Cross Borders Drove Road signs on the SUW way marker posts. We parked at Traquair Community Centre and set off up the path to Minch Moor. For the first couple of miles, the path climbed steadily with 360m of ascent, so there is a warm-up session right at the outset. The added height though soon gave us good views back over Innerleithen, with Lee Pen behind it, and to the Glenrath/Peebles Hills. 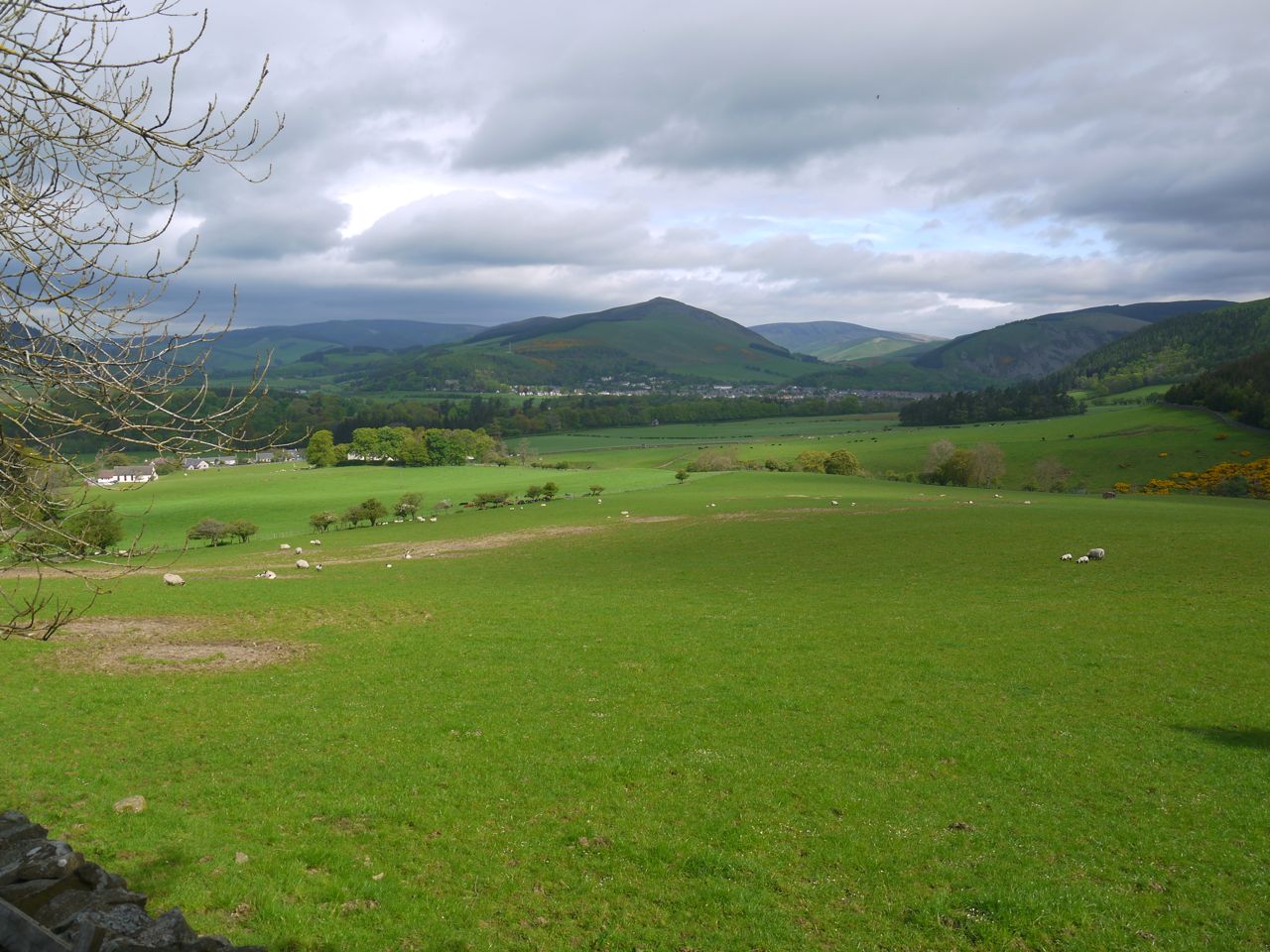 Lee Pen from above Traquair

The Minch Moor Bothy comes a little too soon for a major rest stop but did give us an excuse to rehydrate and remove some layers. We met the first of several groups of mountain bikers near here, and there were prints in the ground of feet, hooves and wheels.

Just below the bothy the path passed through a stone wall with gate posts and a great many stones inscribed with (horse’s) names, as well as a few poems.

Two tracks cross the Drove Road as it climbs and the SUW leaves the Drove road briefly at the higher track. We headed along the footpath while the mountain bikers took the Drove Road.

After 280m of the 360m climb we rejoined the Old Drove Road. Here there was a bench occupied by recovering mountain bikers, and the viewpoint for the Point of Resolution sculpture. This is made up of several “circles” cut into the heather of the hillside. These are actually elongated ovals, the largest measuring 150m by 30m, which appear circular from the viewpoint. This natural artwork was completed in 2005 and I wonder if the circles have to be recut as time goes by. 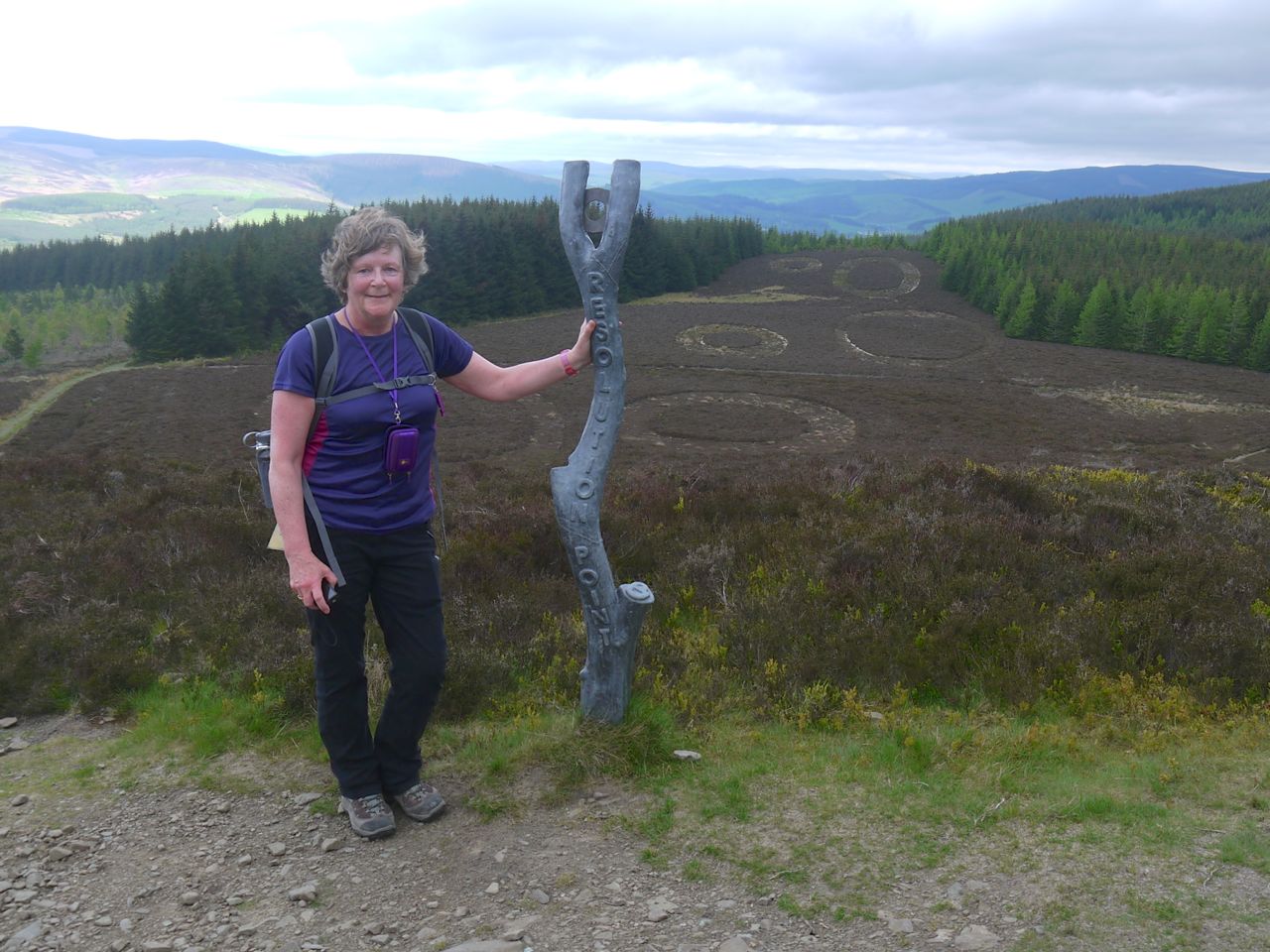 The views from here are of Elibank Forest and in the distance Windlestraw Law in the Moorfoot Hills. The next thing to find is the Cheese Well. It would be hard to miss this since there is an information board, explaining about the Old Drove Road, just bedside it. The board informed us that this was once the main route across southern Scotland.

The Cheese Well is a natural open spring and traveller’s would leave offerings for fairies, usually food.

It is sometimes accounted unlucky to pass such places, without
performing some ceremony to avert the displeasure of the elves. There is, upon the top of Minchmuir, a mountain in Peebles-shire, a spring, called the Cheese Well, because, anciently, those who passed that way were wont to throw into it a piece of cheese, as an offering to the Fairies, to whom it was consecrated. 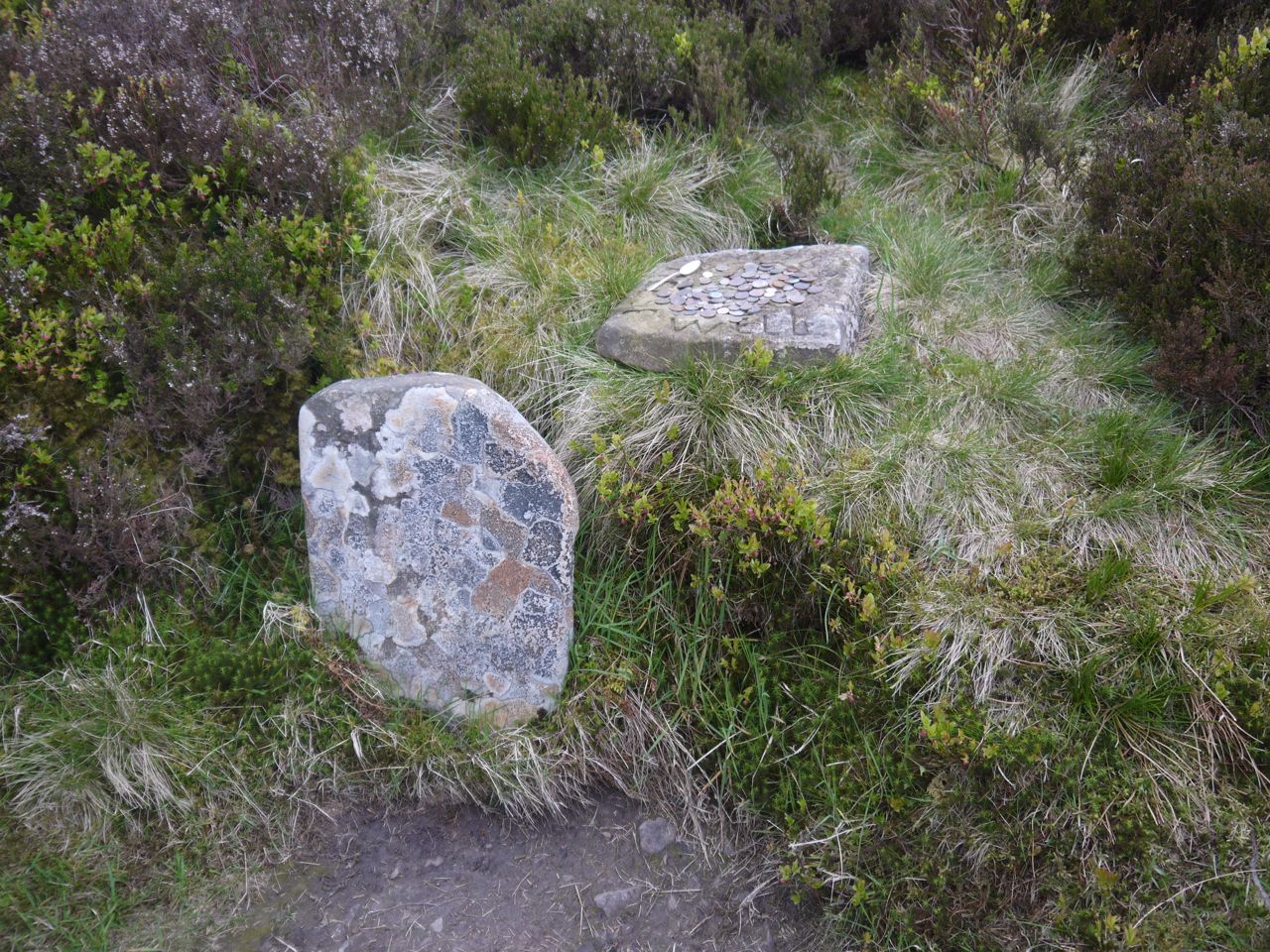 Stones by the Cheese Well

Today’s traveller’s seem to leave coins rather than cheese, though there was also a teaspoon. I left a coin for the wee folk, and hopefully they can make use of it. The stones at the well, inscribed “Cheese Well”, aren’t particularly ancient, apparently dating back only to 1965.

After the Well we had our first glimpse of the Eildon Hills, looking very far away and  came to the highest point of this section at 520m. A path leaves the SUW/Old Drove Road here for the summit of Minch Moor, 570m away according to the sign. There is a bench here for the weary, or those who need time to decide which path to take. I had already decided it was time to walk the extra 1.14km and visit Minch Moor’s summit, so onwards and upwards it was. 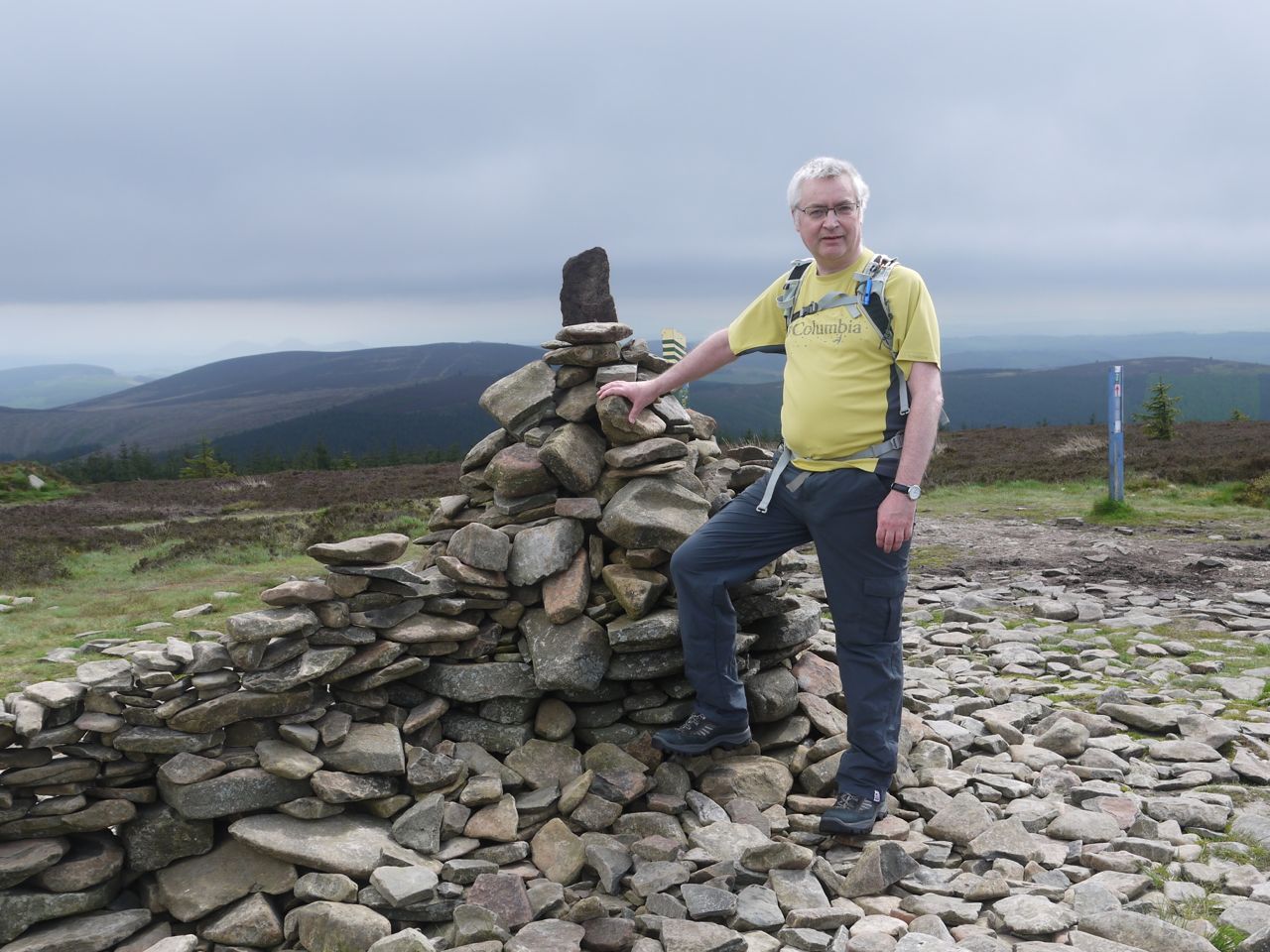 Minch Moor has a summit cairn which I think has been built up again in the last few years, there is also a mountain biking emergency information post. The views were pretty extensive but the horizon was hazy. It was a little breezy at the top so we didn’t hang about too long.

We traced our path back to the SUW and set off for Hare Law. The path here took us through the forests of Little Minch Moor. Unfortunately the path here was a mudfest. There had clearly been a mountain bikathon coinciding with wet weather. This slowed us a little as we picked our way along, sometimes having to find a way through the trees beside the path. 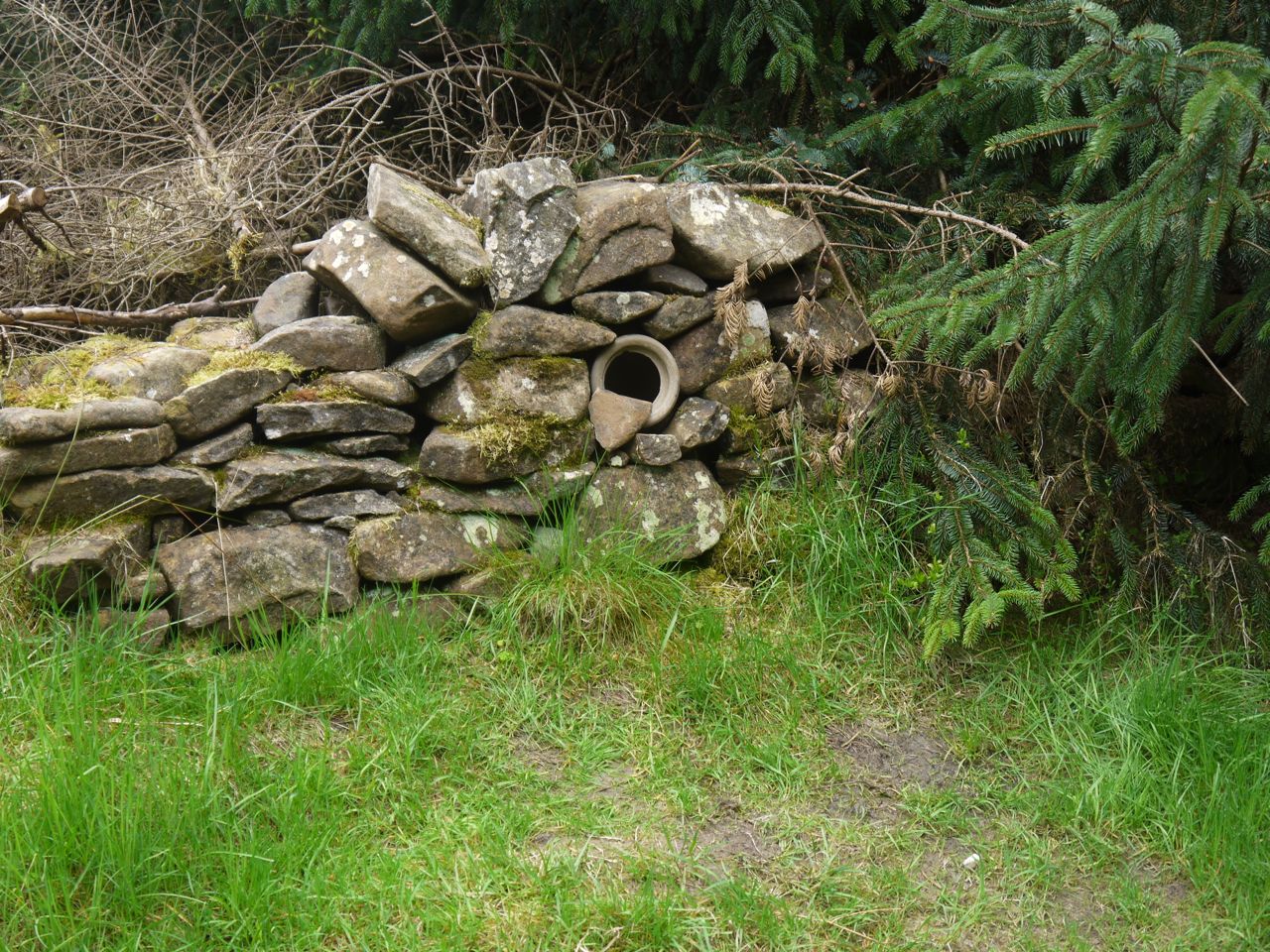 This section includes the three-quarter point of our SUW and one of the hidden coin kists. The Ultreia posts are half a mile apart so you have to keep your eyes peeled.

Five years ago, walking from Tibbie Shiels to Yarrowford with some friends I slipped into silent-automaton mode not having enough energy to both walk and think. On this occasion as I climbed the slopes of Hare Law, I recalled that day. In particular I remembered that DW had assured me, when at Minch Moor, that it was all downhill from there. I remember thinking that we seemed to be going uphill though I was too tired to moan. 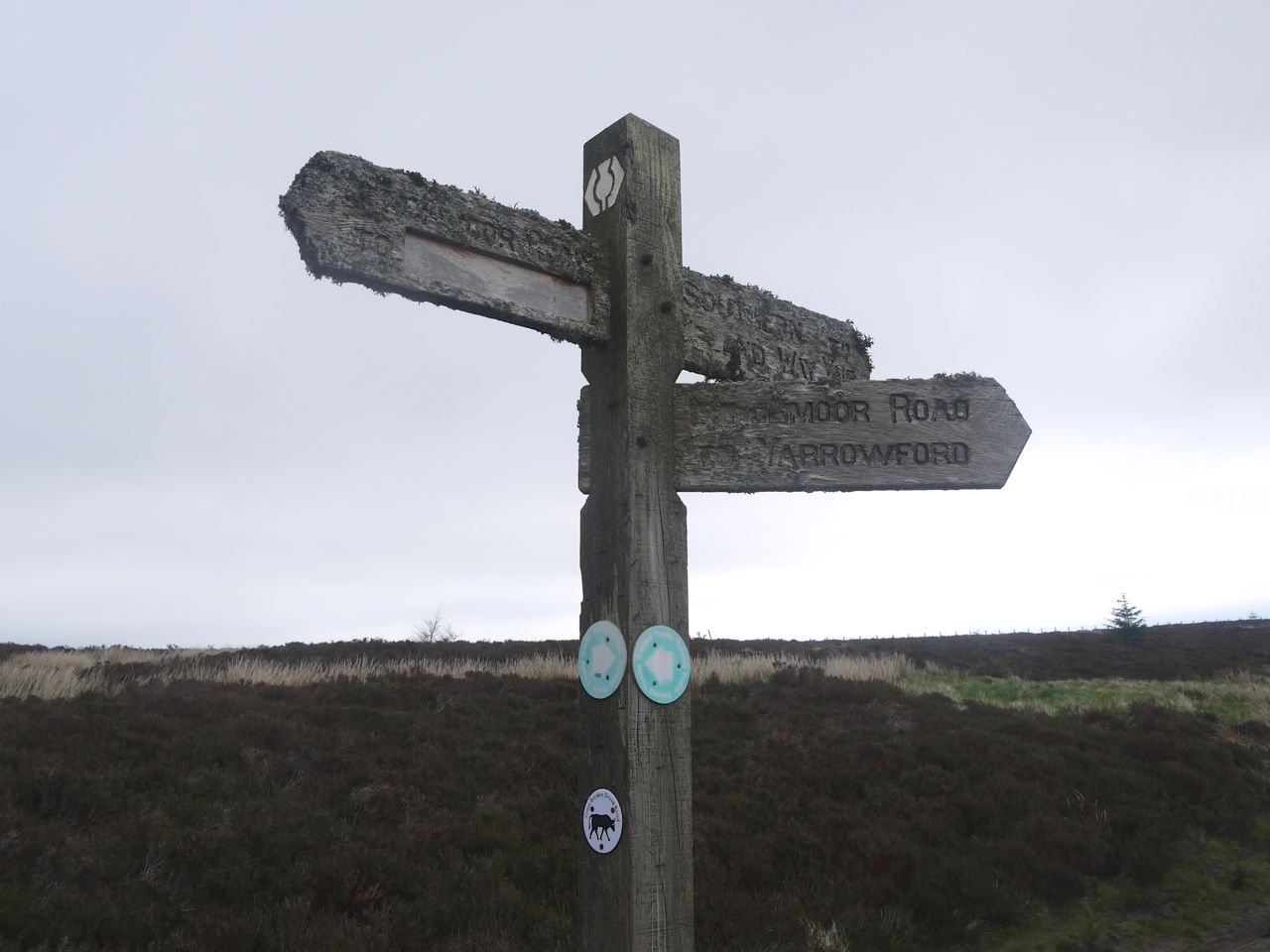 After Hare Law we left the forest for moorland, walking along the Drove Road up to the Brown Knowe. The path did look quite steep from a distance but strangely it seemed much more gentle once we got there. The path passes through Wallace’s Trench. The original purpose of this earthwork is unknown and it is not certain that Wallace had anything to do with its construction.  Given how much remains even now I presume this must once have been a substantial construction that blocked the passage across Brown Knowe, there being marshy ground to the north and steep hillsides to the south. The type of construction suggests it was defence against a force from the west. 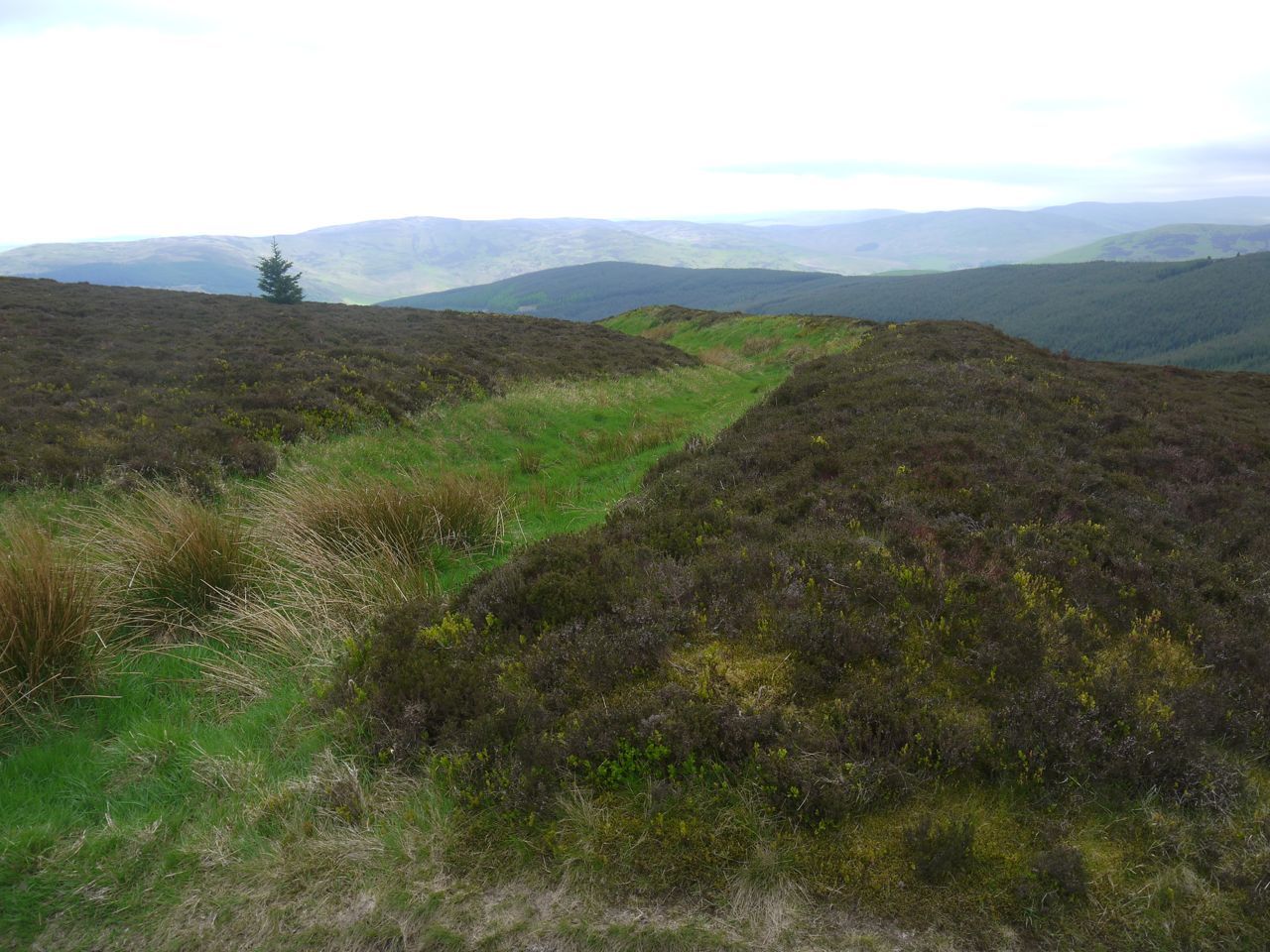 A small cairn marks the summit of Brown Knowe and beyond it we could at last see the Three Brethren in the distance.  A couple of walkers past us heading in the opposite direction. It was getting to be around lunch-time but the summit was too windy to stop for food. We carried on and eventually stopped in the dip at Four Lords Land. 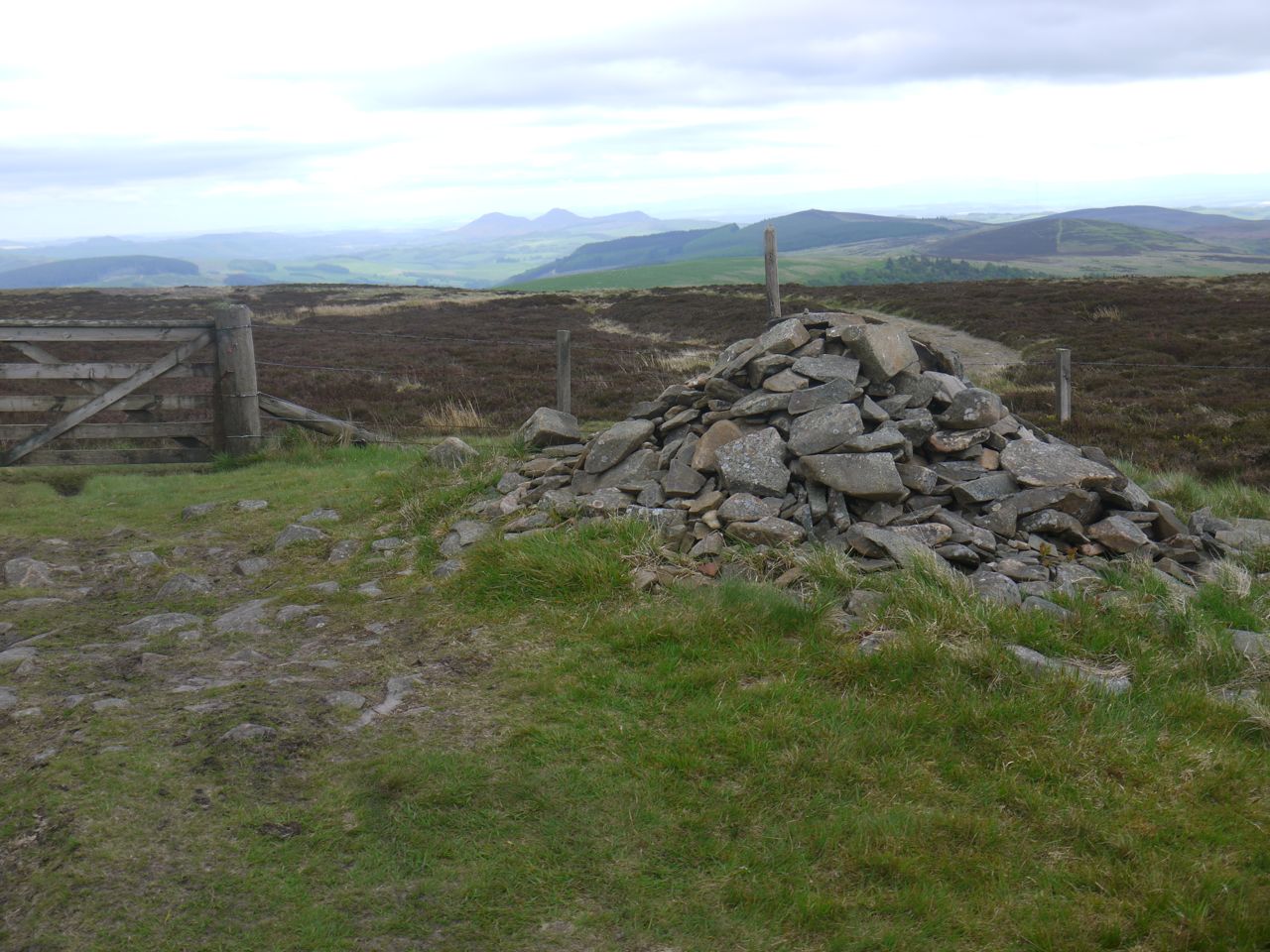 After lunch we had a pleasant walk over the slopes of Broomy Law and up to the Three Brethren. The felled forest below the three brethren has new trees sprouting so in a few years it will be forest again and the views will be lost.

The Three Brethren are tall cairns marking the boundary of the original estates of Yair, Selkirk and Buccleuch. The first was built by the Laird of Yair and Whytbank Tower in 1512 and the others added later. By now the Eildon hills were looking a great deal closer. The views were extensive and one of the fences even has a seat built unto it, the wind was up however so we started the long walk down to the Tweed. This took us down into the col before the next hill, where at some small lochans the path turns left and eventually took us down into the woods. 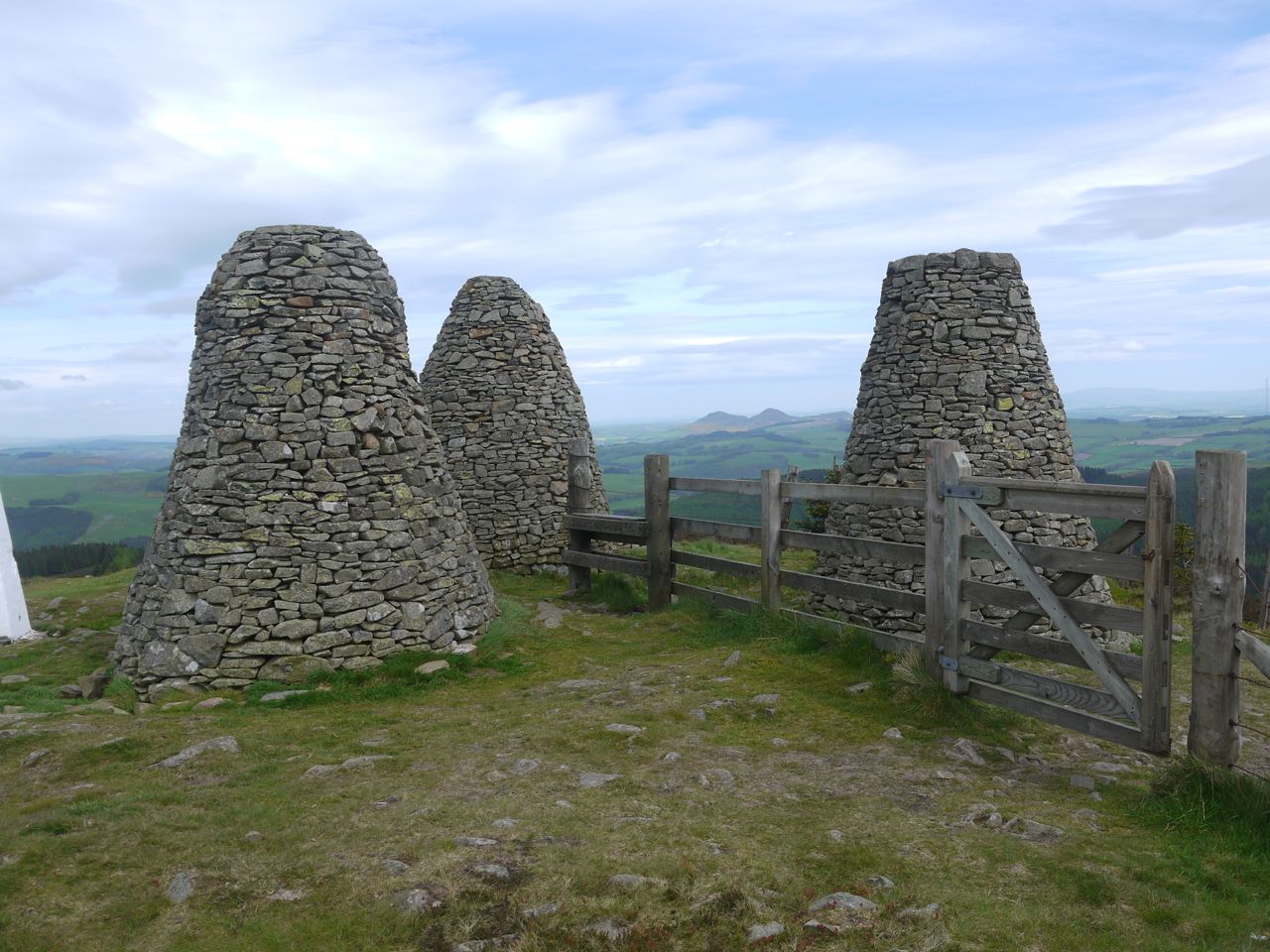 My recollection of this section was that it had a short steep downhill section, and I warned Audrey about it. My memory had exaggerated the steepness but the descent left me with anterior knee pain and her with painful toes.

We then had a easy gradual downhill section through woodland with the sunshine glinting through. We passed a rusting derelict tractor in the grass and eventually reached the River Tweed which we crossed at Yair Bridge. 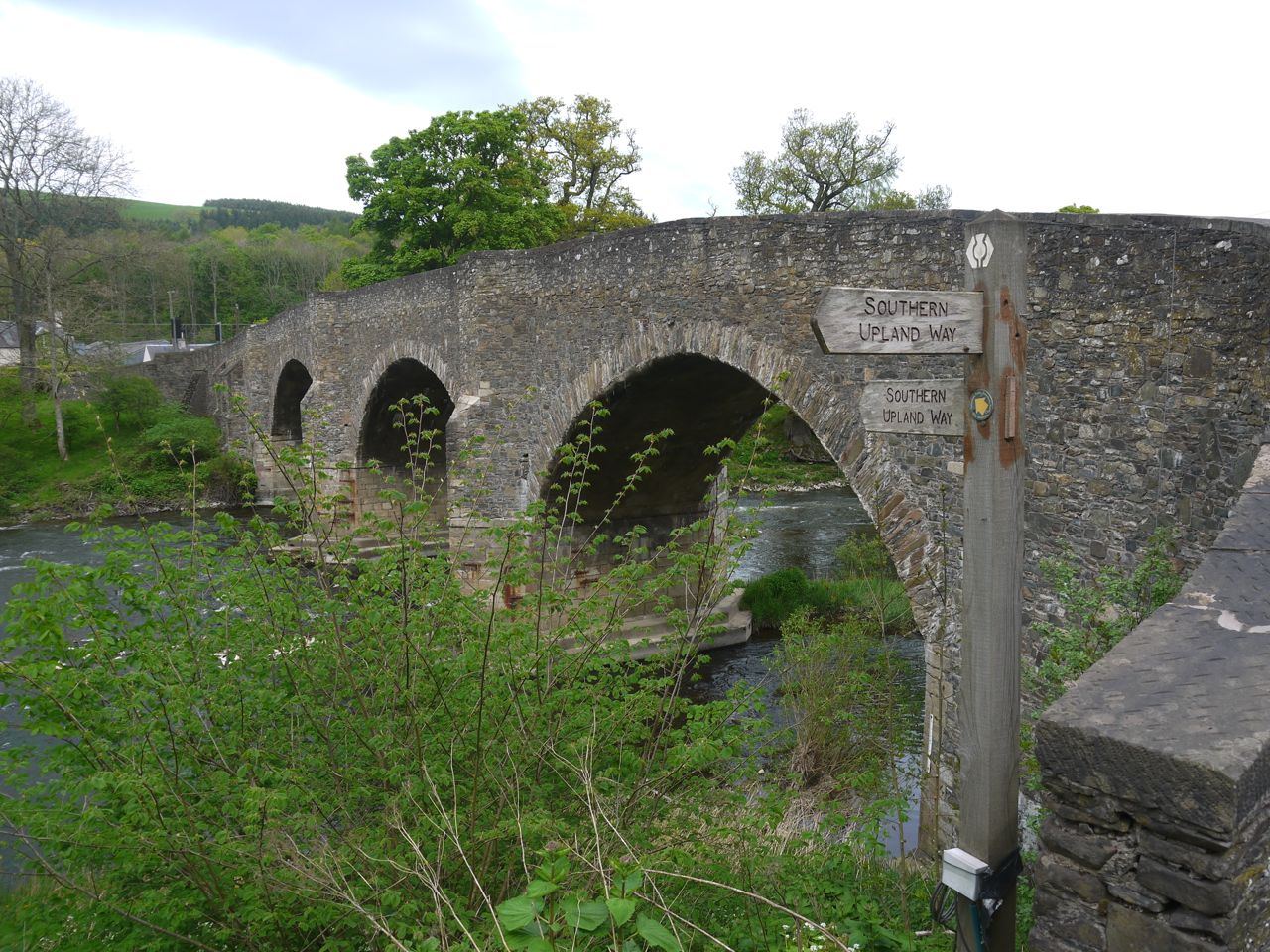 There is a gentle climb from the Tweed up Fairnilee Hill which seemed much steeper than it actually is. The woods here had fitted carpets of bluebells which gave us an excuse to stop and take photos. There was a well placed tree stump by the farm track, and it seemed ideal for a brief sit down while I had a sip of water. But no sooner had I got myself comfy then we realised there were ants all over it, so the rest was cut short. 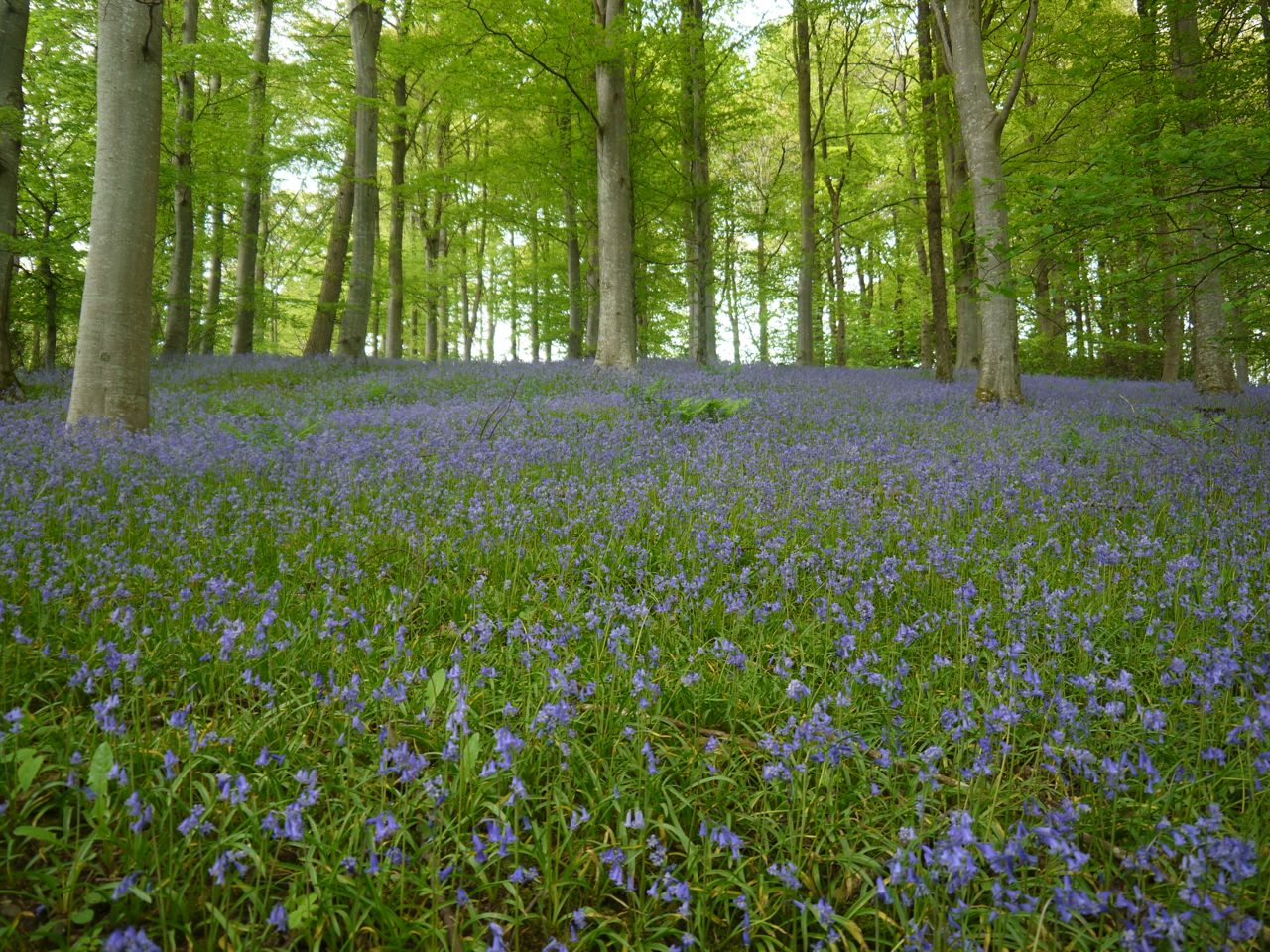 Once over the brim of the hill we could see the Eildons again. The fields here have piles of stones which are apparently “clearance cairns”. A large cairn marks the point where Gala comes into view and the hillside nearby has “Focus Judo” spelled out in stones, Focus Judo being a local club.

As we came down to the woods of Gala, I had been lulled into a false sense of security and didn’t notice the bogginess in the lower field until I was deep in it. So much for mud free boots. 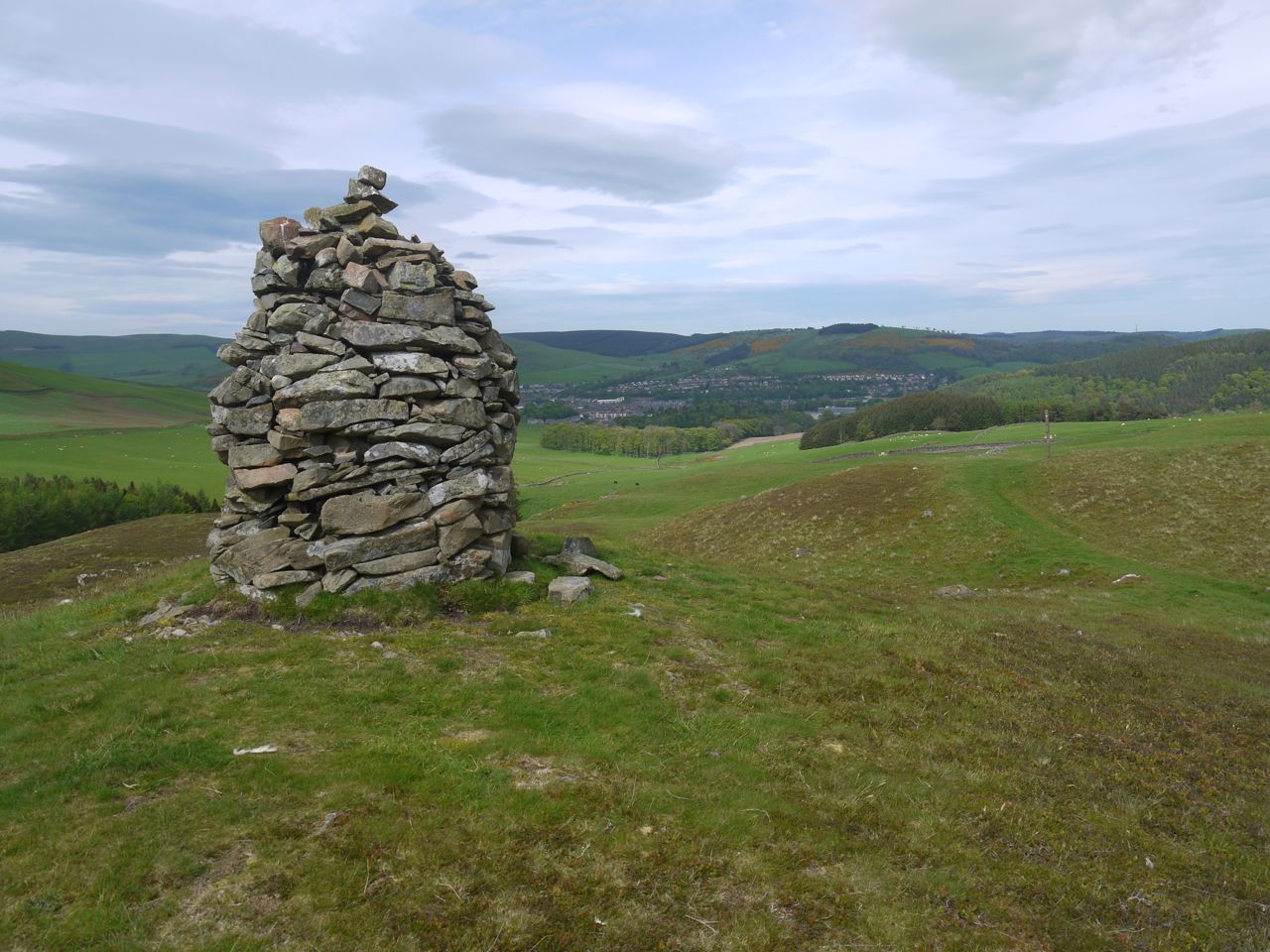 The SUW takes a indirect route through Gala woods but there are SUW waymarkers to point the way. 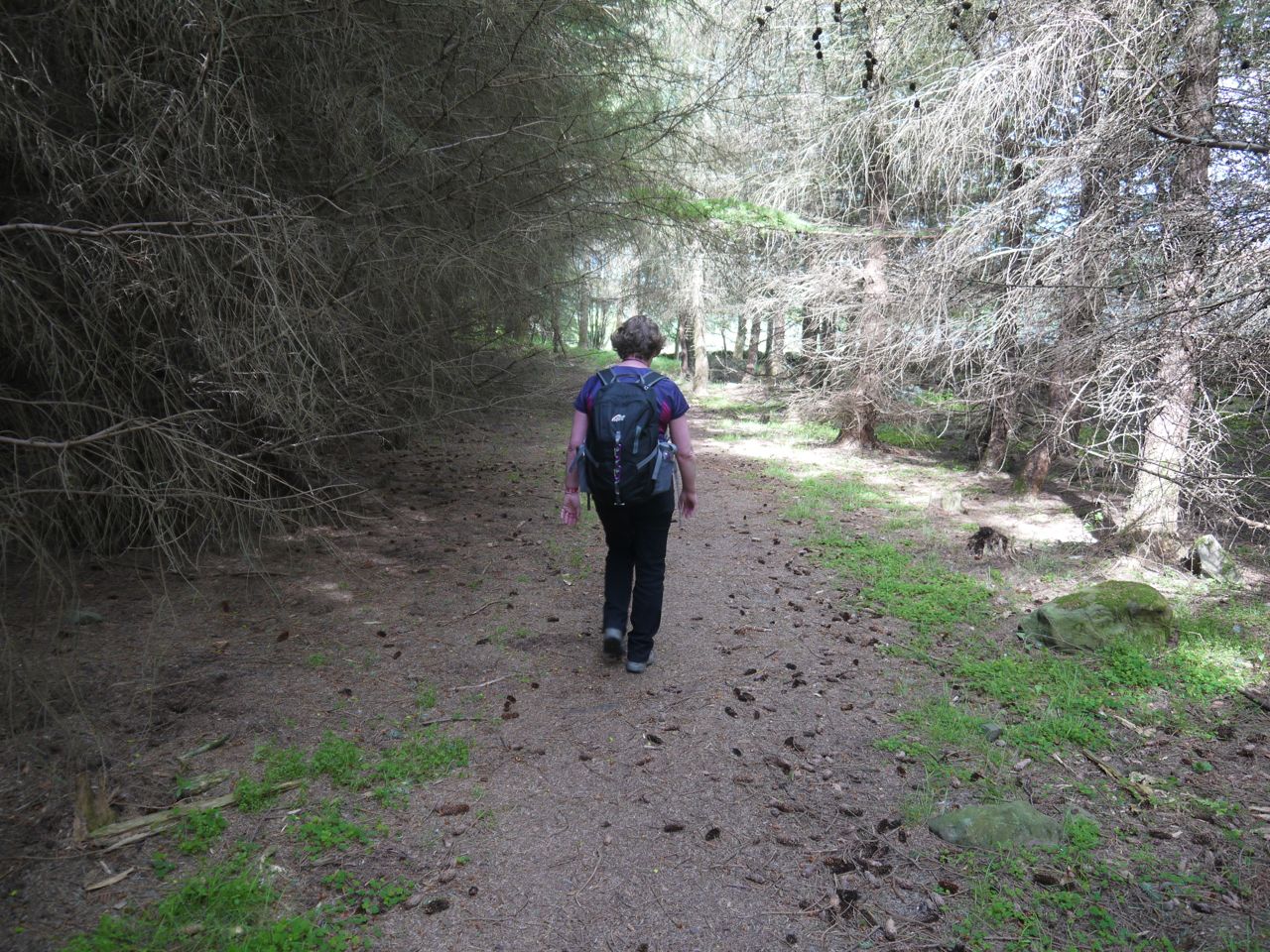 
Share this...
This entry was posted in Borders and tagged Paths, SUW, Wee Hills. Bookmark the permalink.