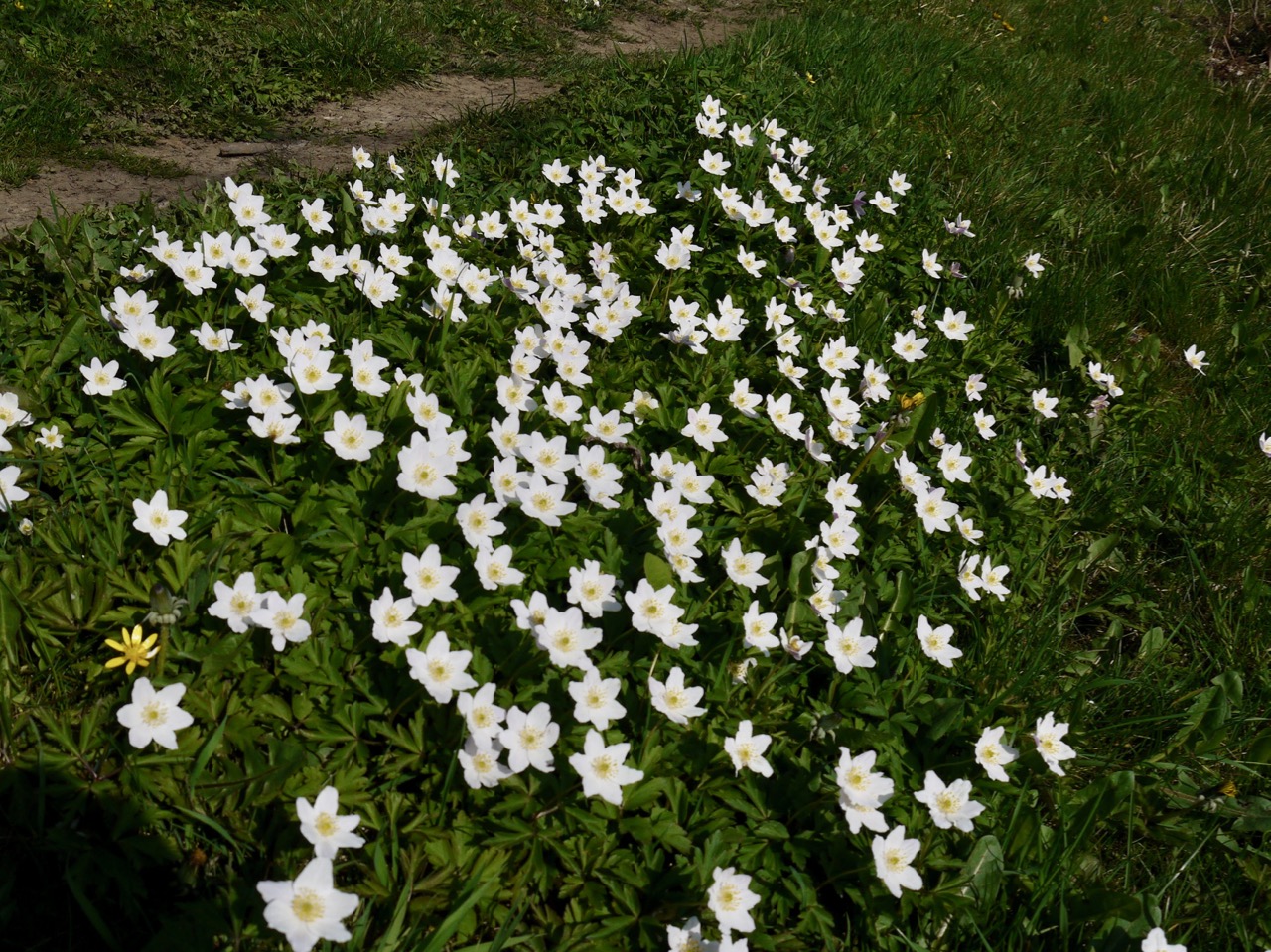 Except for a wee diversion at Brunton, this section ran beside the B6318, rarely drifting more than a stone’s throw away. The B6318 is apparently the longest B road in Britain, and because it is so straight I had presumed it was following the route of an old Roman road. But I was mistaken. It is labelled as “Military Road” on the OS map and dates to the 1750s. At the time of the 1745 Jacobite uprising, Marshall Wade had been unable to move his troops from Newcastle to Carlisle to intercept the rebels because of the poor roads, so a new road was planned. It was built close to Hadrian’s Wall which provided a handy source of stone for the construction. 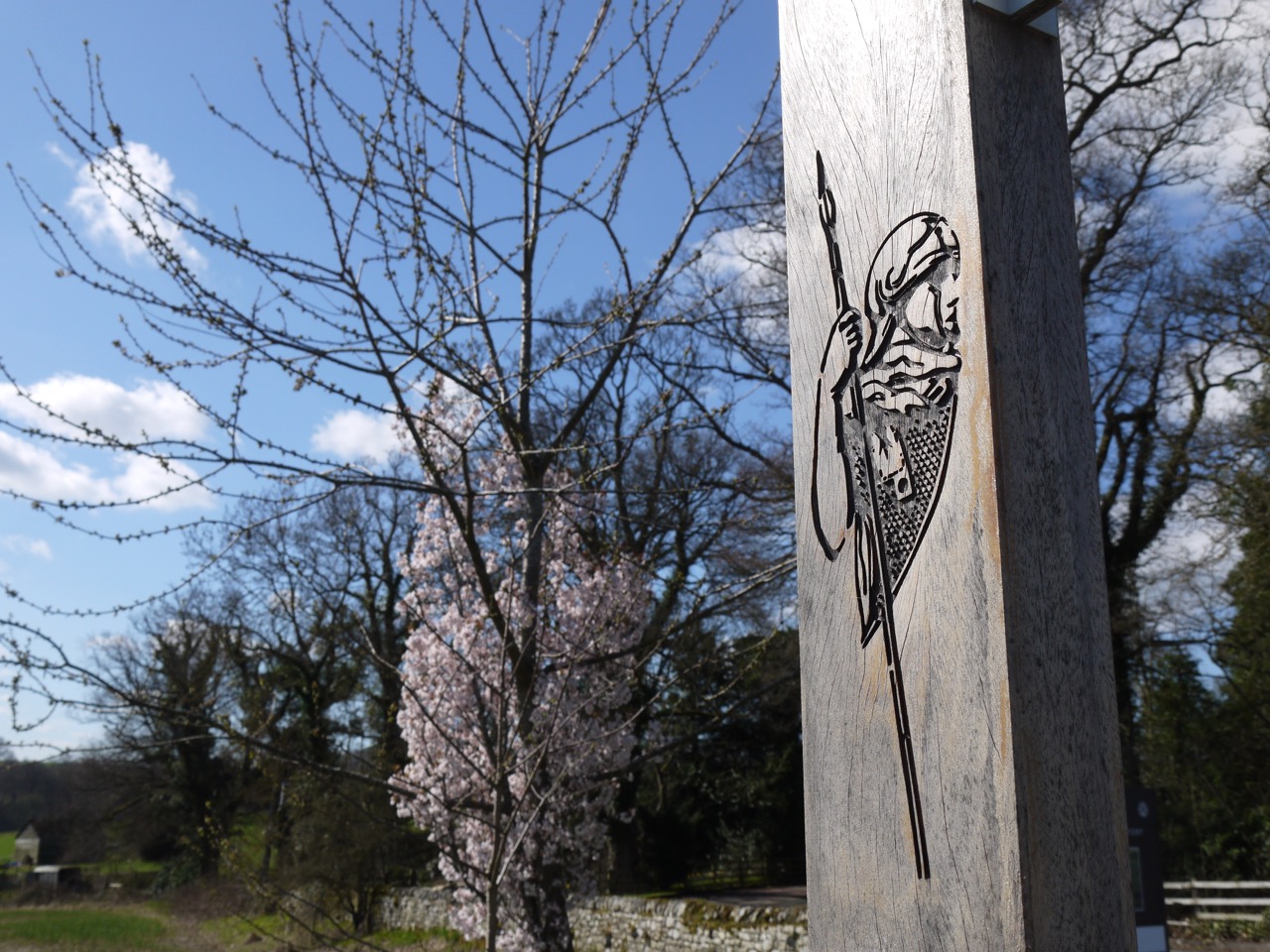 The days of military rebellion now lie in the past, hopefully and the B6318 is frequented by tourists visiting Hadrian’s Wall. I wonder how much more may have survived if the military road had taken another route.

We began at Chesters Fort and walked along the pavement into Chollerford. The hedgerows suggested that Spring had sprung with profusions of flowers, and unlike the previous day’s walk which was carried out in waterproofs I was in tee-shirt and sunhat with exposed skin sheltering behind SPF30. Though despite these efforts I was greeted with “looks like you’ve caught the sun” when I arrived home. 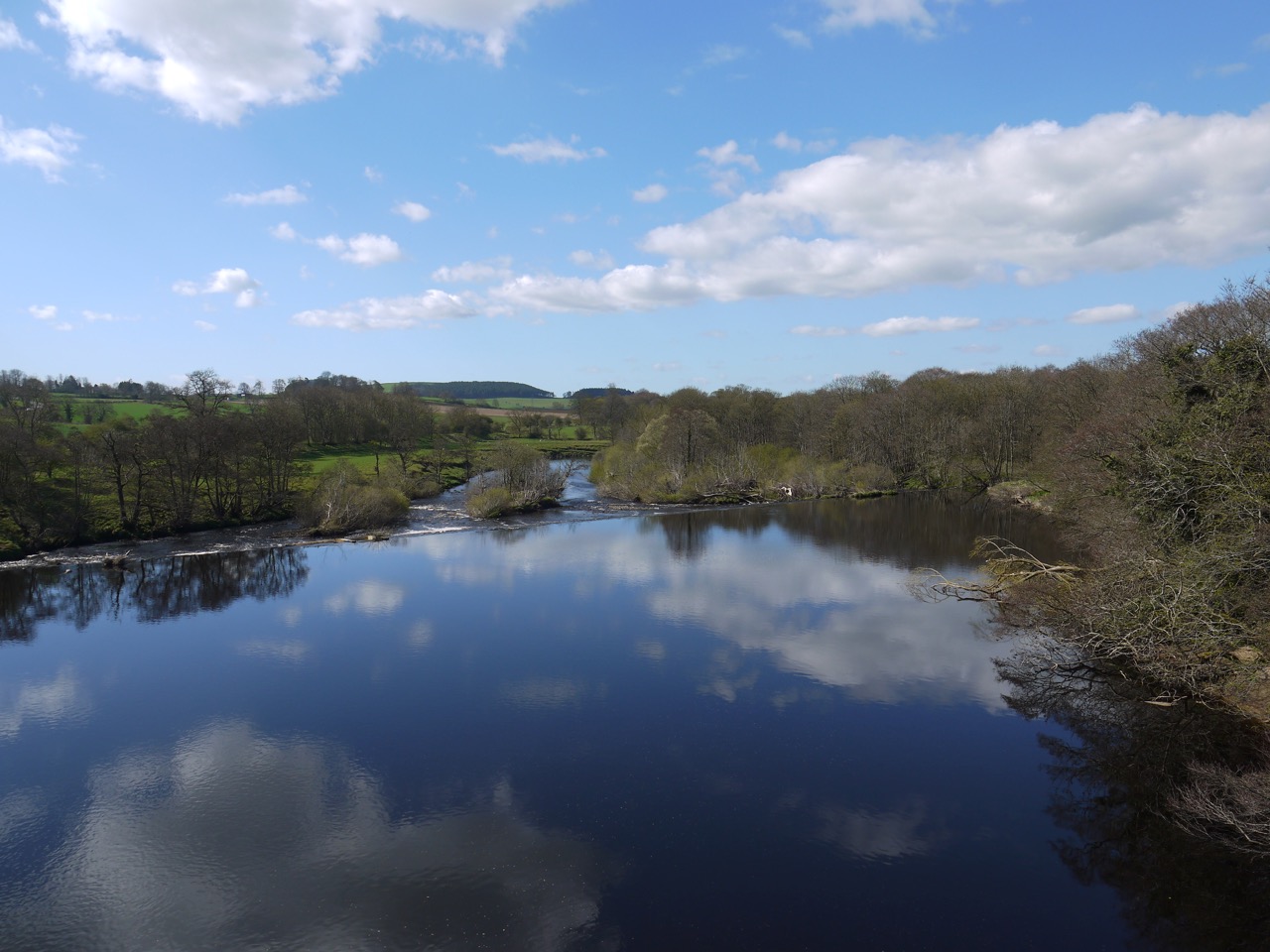 The North Tyne River is a substantial watercourse here, and though the name Chollerford suggests that Ceola forded the river here, we crossed on Chollerford Bridge, a single lane affair dating from 1785. The first bridge here was built in AD122 (What did the Romans ever do for us?), and the military road had used a bridge dating from 1394, but that was destroyed in the Great Flood of 1771 which laid waste to most of the Tyne’s bridges include the original medieval Tyne bridge connecting Newcastle and Gateshead. 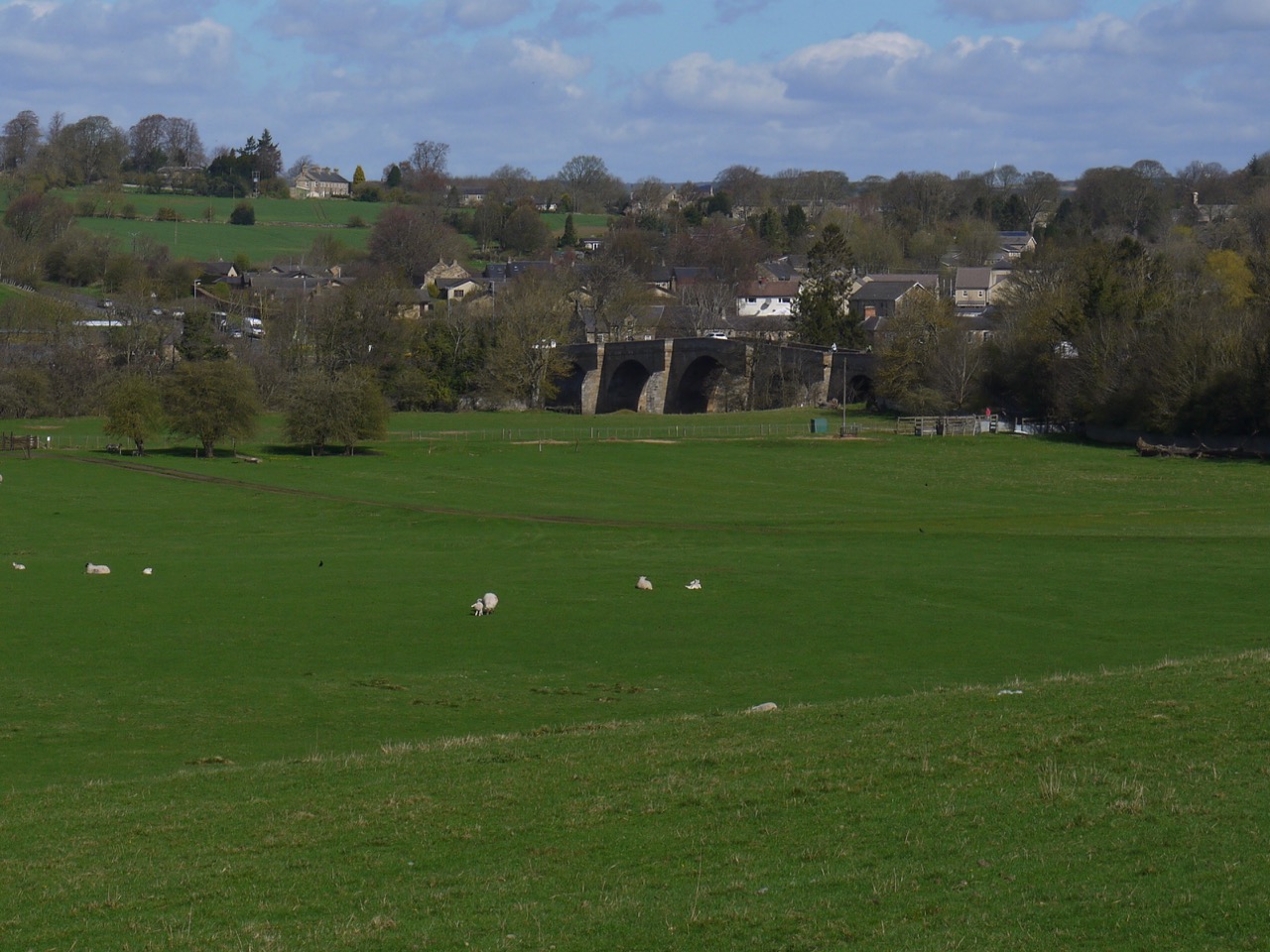 After the bridge we walked uphill to a a crossroads and waited patiently for a gap in the traffic before heading along the A6079 looking across to see where the original Roman bridge would have stood. A waterwheel stands beside a house here in the absence of a watercourse. I’m not sure why the Hadrian’s wall Path has this little diversion. Perhaps because there is no route to take beside the road, which itself has no walkway, or perhaps it is to soften the climb with a zig-zag. 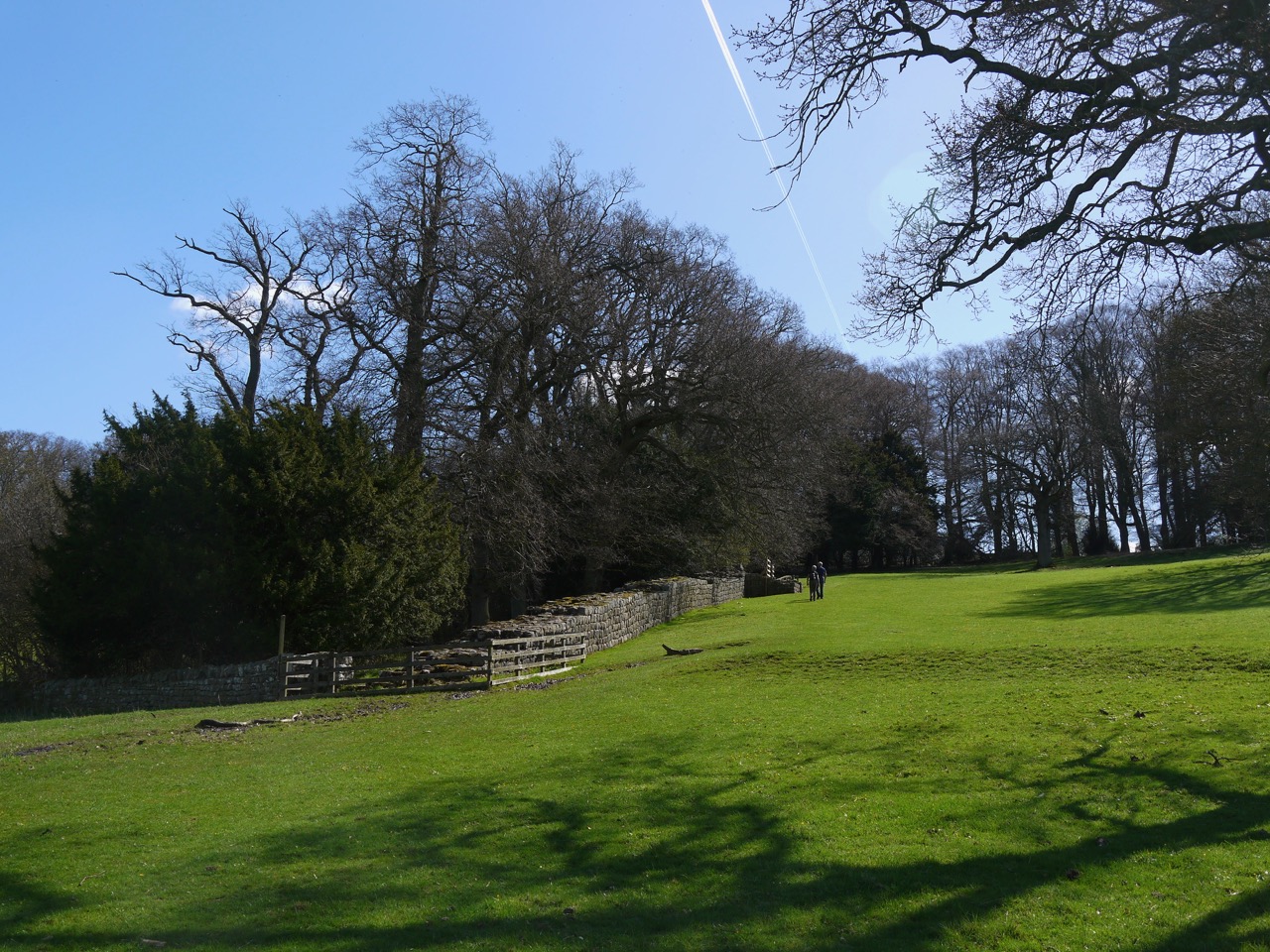 Anyway, the diversion took us by the remains of Brunton Turret so we walked up to have a closer look before returning to the road. We then turned up a minor road to walk under the shade of trees back to the military road. The woods here had a carpet of wood anemone and we could spy a small building described on geograph.co.uk as an obelisk. I wonder though if it might be a dovecote or a well. 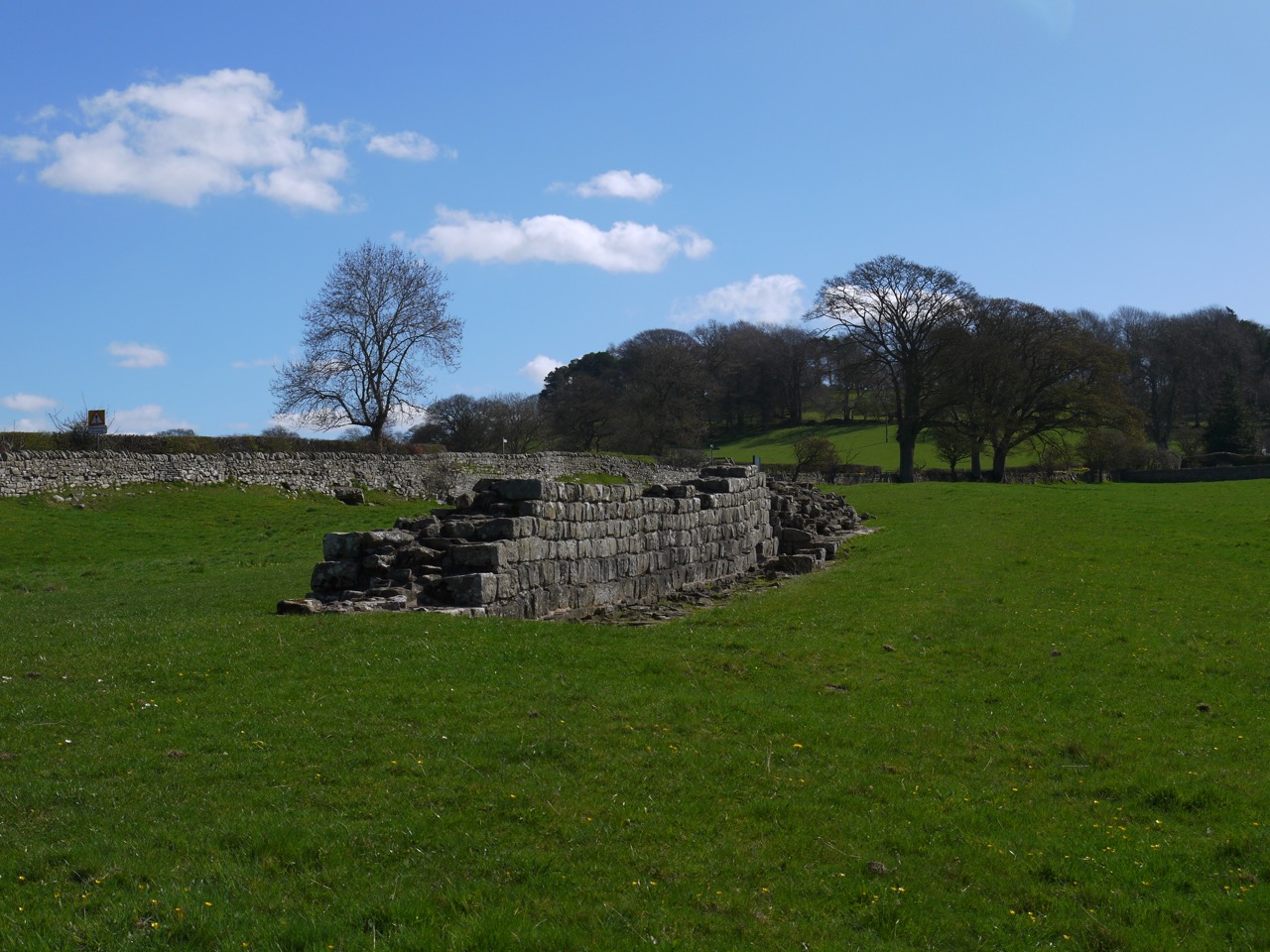 Once we reached the B6318, we did not walk along the road but parallel to it through Planetree woods, which were rich with spring flowers. It was a gradual climb through the woods and then across fields and we took a bit of a breather at the section of Hadrian’s wall. There were excellent views back as far as Whin Sill from here.

The trail then crosses the road to continue climbing up to Heavenfields, the site of a battle in 634 where Oswald of Northumberland defeated an army of britons led by Cadwallon. 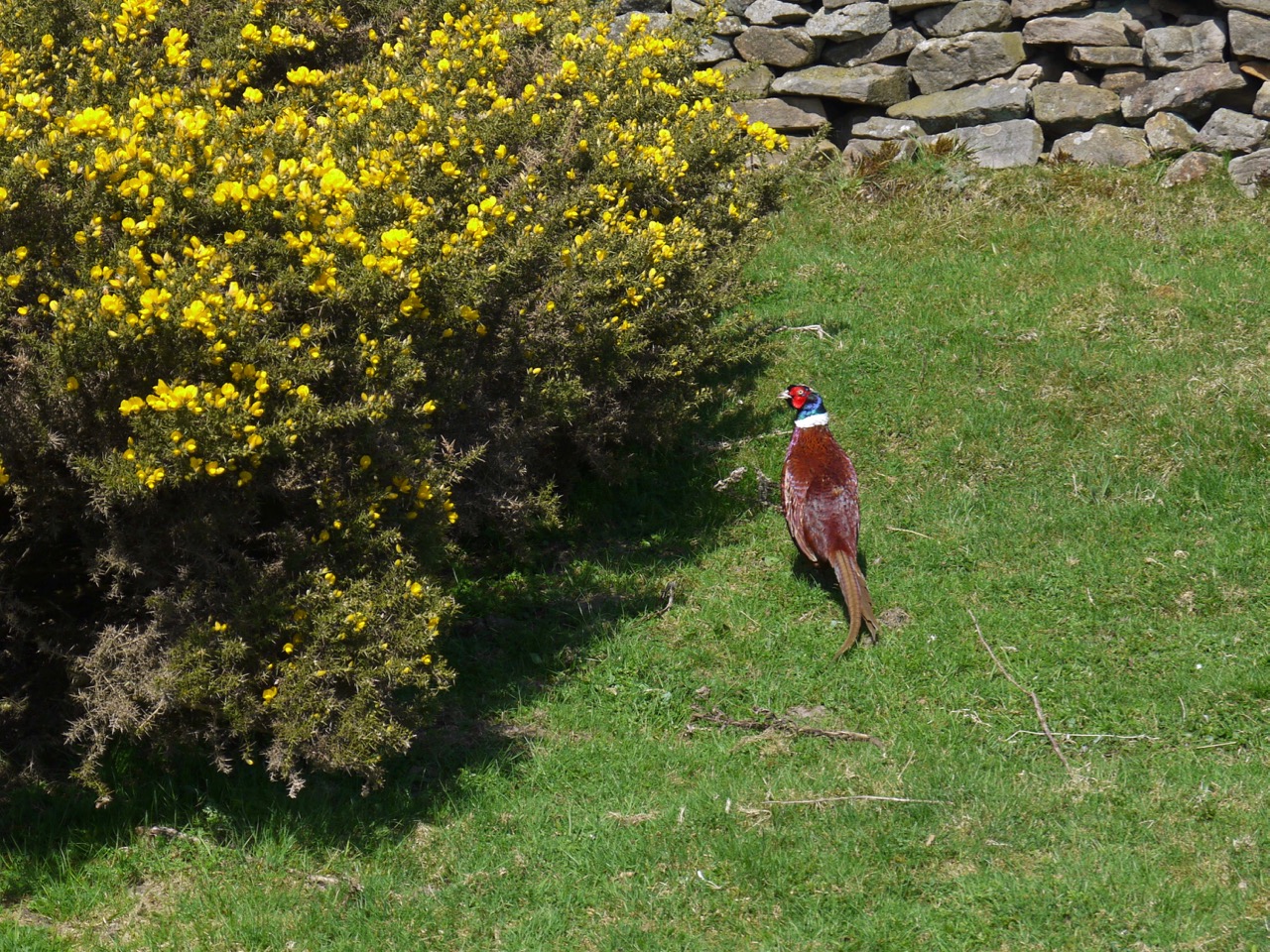 Before the battle Oswald had a vision in which St Columba told him “Be strong and act manfully. Behold, I will be with thee. This coming night go out from your camp into battle, for the Lord has granted me that at this time your foes shall be put to flight and Cadwallon your enemy shall be delivered into your hands and you shall return victorious after battle and reign happily.” This led Oswald to erect a large wooden cross before the battle a modern replica of which still stands beside the road. He was victorious and Cadwallon was killed. Oswald went on to unite the Northumbrian kingdoms of Bernicia and Diera. 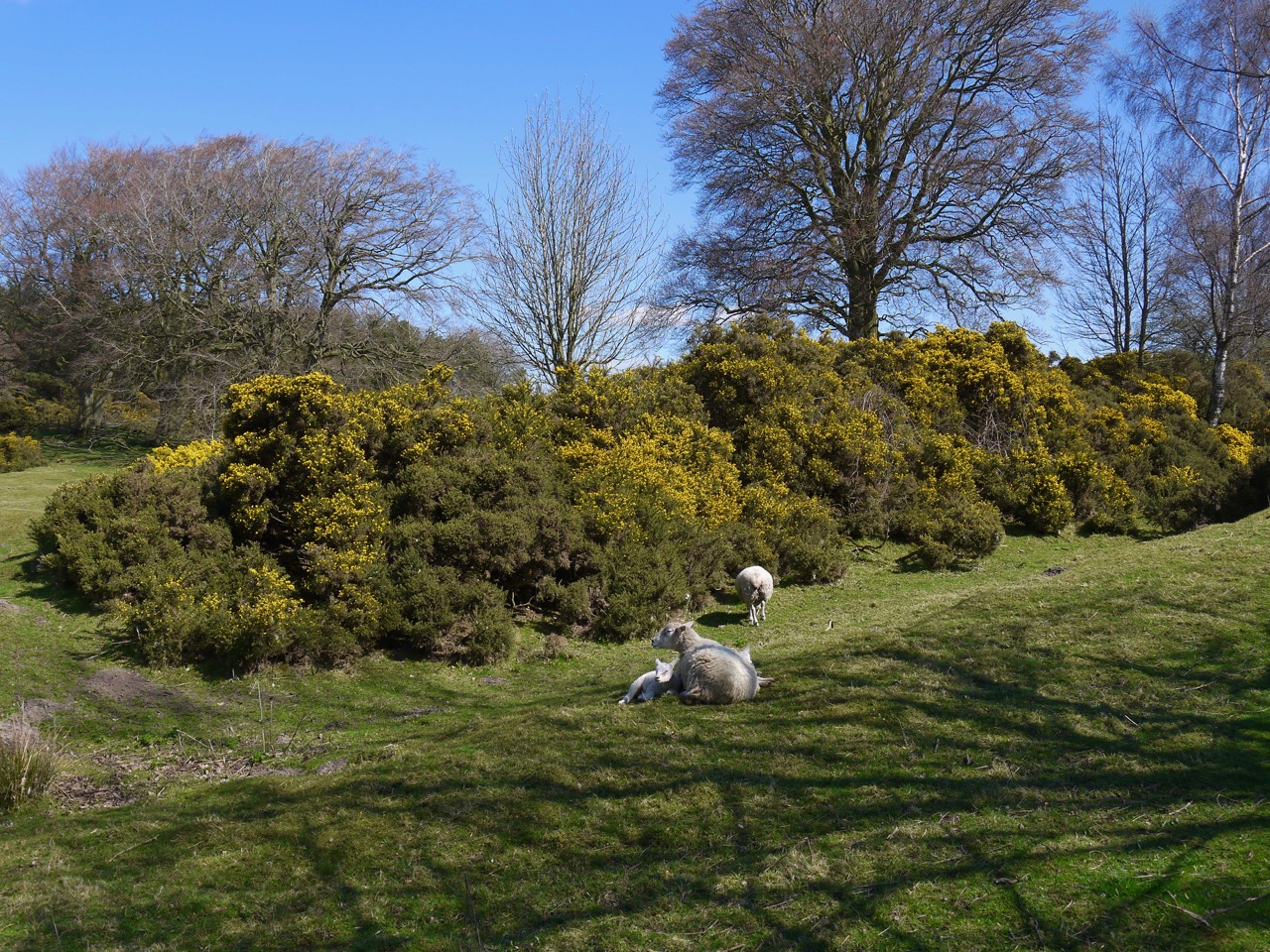 A small church now stands at the site of the battle surrounded by trees and fields in which sheep quietly graze. The clash of battle has now been replaced by the calls of birds and the occasional rumble of traffic on the B6318.

In planning the walk I had realised there would be a climb out of the river valley at Chollerford and thought Heavenfield would be the end of the ascent, but the trail continued to climb all the way to the trig pillar on Whittington Fell. 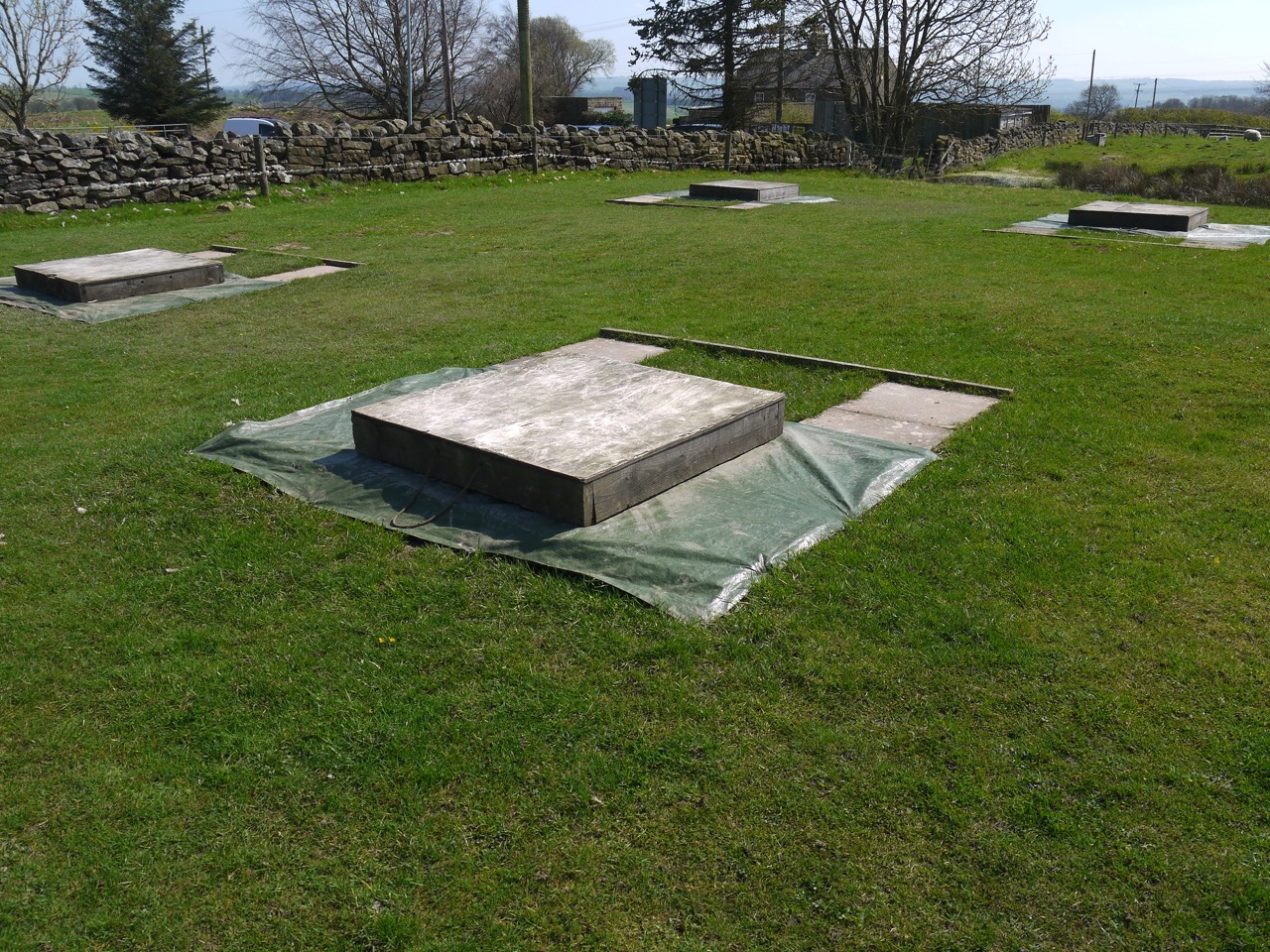 Once we were ‘over the top’ there was a gentle descent to Portgate where we came across some strange square areas partially covered in wood. A little research has identified these as quoits pits. The game originated from throwing horseshoes at spikes and is likely to have been introduced into Britain by Roman soldiers. 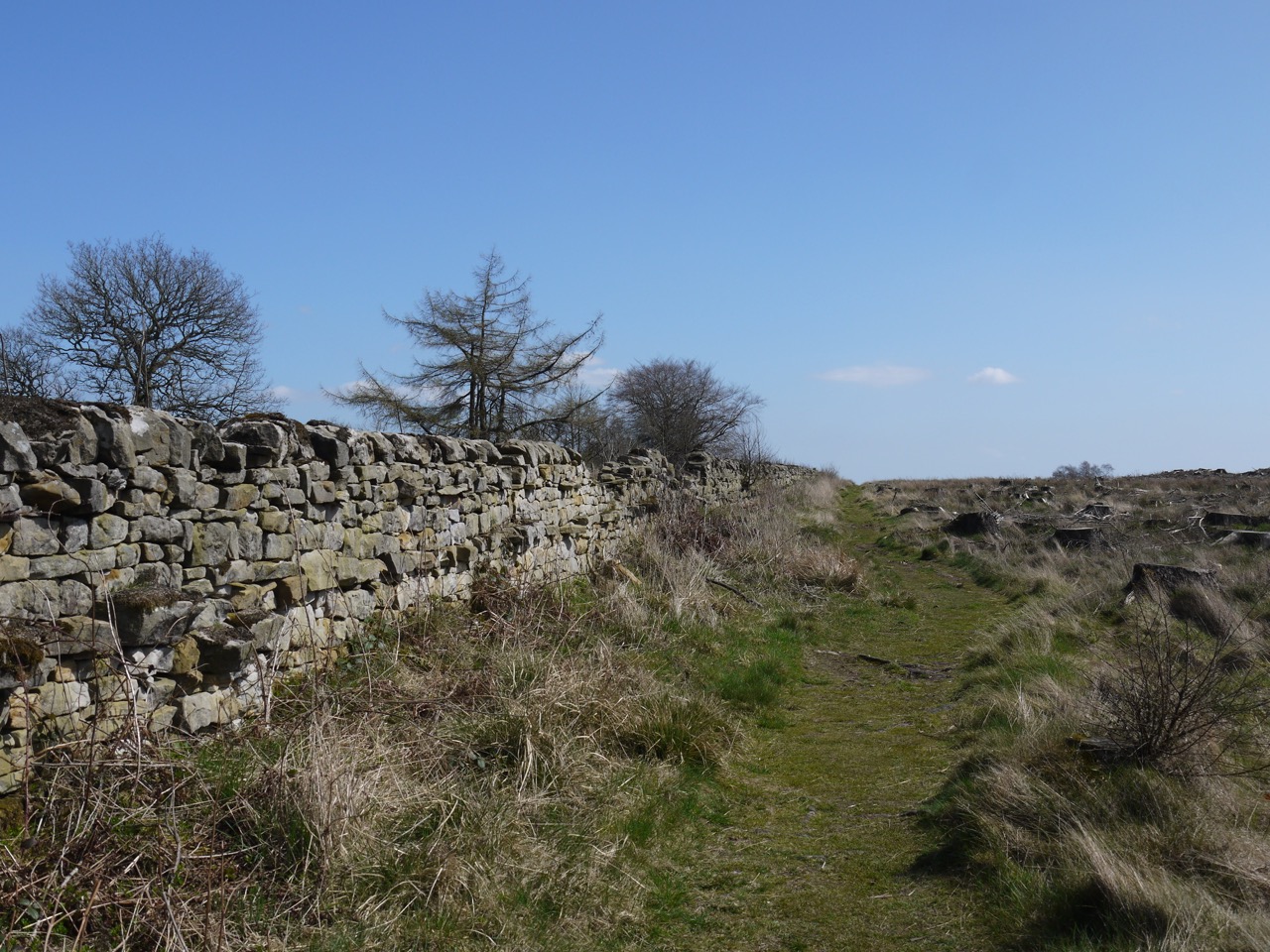 Portgate marks the site of a major fortified gateway in Hadrian’s Wall controlling traffic on Dere Street. Dere Street was a major Roman Road running from York to Scotland, reaching as far as the Antonine wall. The Roman name is not known and Dere likely dates to Saxon times referring to the Northumbrian Kingdom of Deira. The name Portgate is also of Saxon origin, the original Roman name for the gateway being unknown.

We had intended to have lunch at Portgate. We could I suppose have used the facilities of the Errington Arms, but we had our sandwiches and the weather was lovely so we wanted to be outside. Portgate itself is a junction of two busy roads, the A68 (the old Dere street) and the B6318 (the old military road), so we walked on until we found a quieter spot off the road and overlooking the site of Onnum Roman Fort. 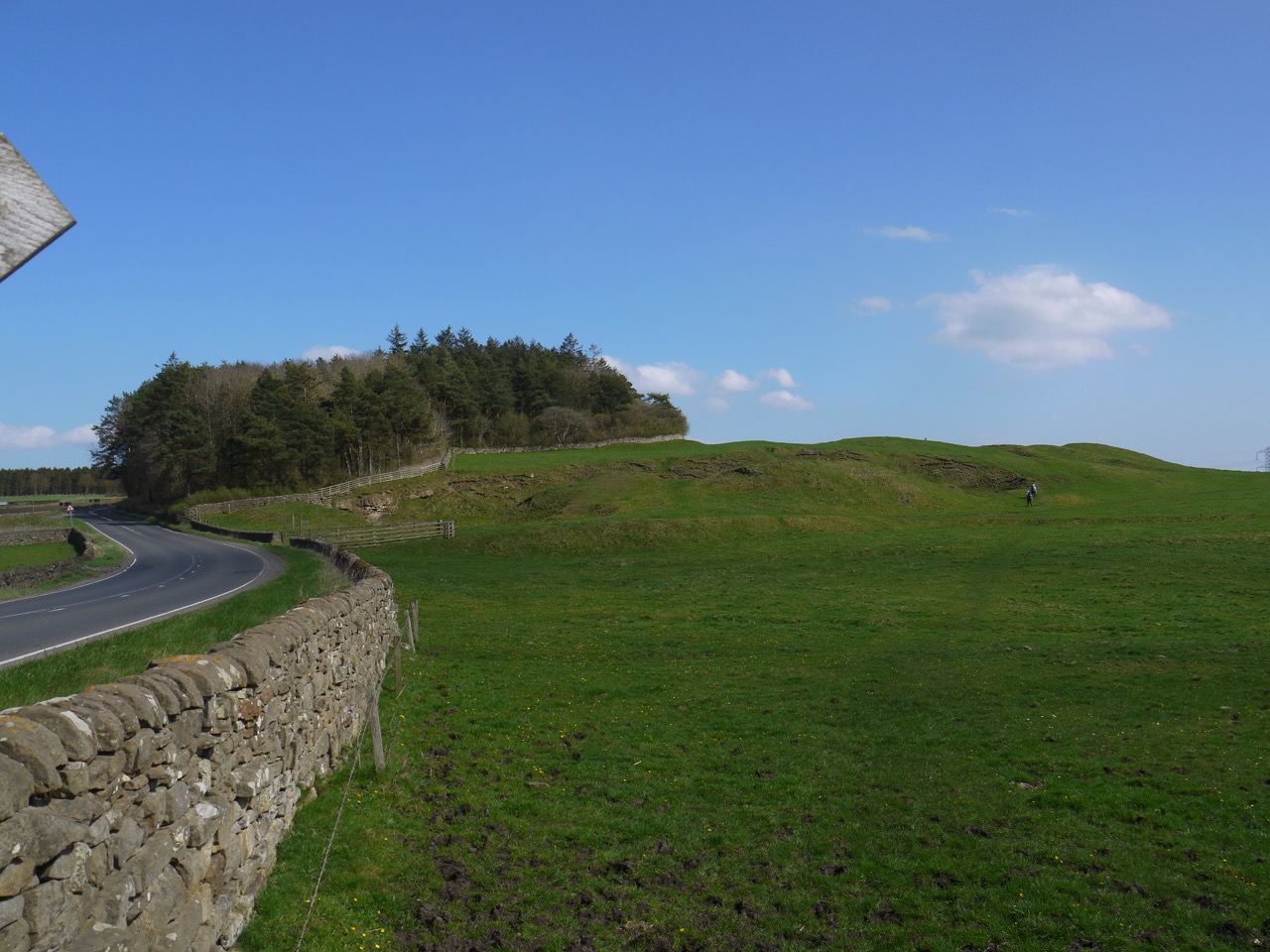 Ahead we could see Down Hill, which proved to be less massive than it looked from afar. The trail passes around the woods here and there are a number of large rocks that be great to sit on for lunch. But we had just had lunch and there were already people on the rocks. One chap asked us to look out for his cap that had blown away and asked us to return it if found. It apparently had his email address inside. 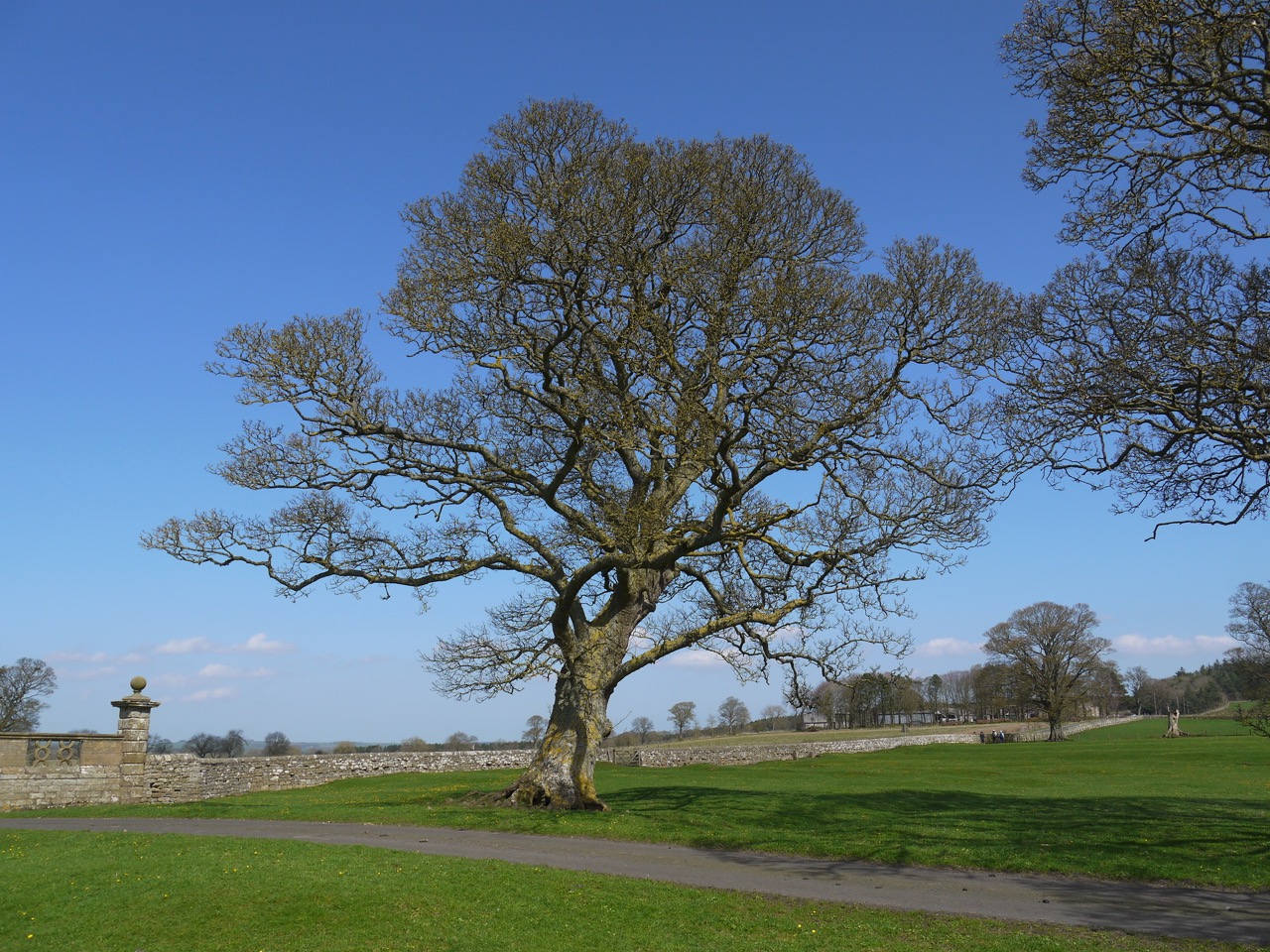 From here it was a gentle descent (flat really) through the grounds of Halton Castle with its large gates, and through Halton Shields. The OS has a phone box marked here and I had read that it was bilingual, English and Welsh, probably due to a confusion between Wrexham and Hexham rather than harking back to Cadwallon’s time.

I pleased to say I finished this section without exhausting myself. Firmer ground, and better weather certainly helped.

Since our drive to and from these walks has taken us through Once Brewed and Twice Brewed, on the B6318, I thought I would look into the names a little more.

“These peculiar names stem from the thirsty soldiers building the Military Road in the 1750s whose gratitude at reaching the local inn was tempered by the weakness of the beer, and they suggested that it needed to be brewed for a second time to make it stronger. The name “Twice Brewed” therefore became associated with the local inn, and the hamlet that grew up around it. Roll forward a couple of centuries to 1934, and the opening of the Youth Hostel (one of the first in the country) by the local Lady Bountiful. As she was a confirmed teetotaller (and the YHA was a temperance movement) she disapproved of the boozy association of the hamlet’s name, insisting that nothing stronger than tea would be served in the Youth Hostel, and that only needed brewing once! So was coined the name of the Youth Hostel, and subsequently the adjoining Visitor Centre.” 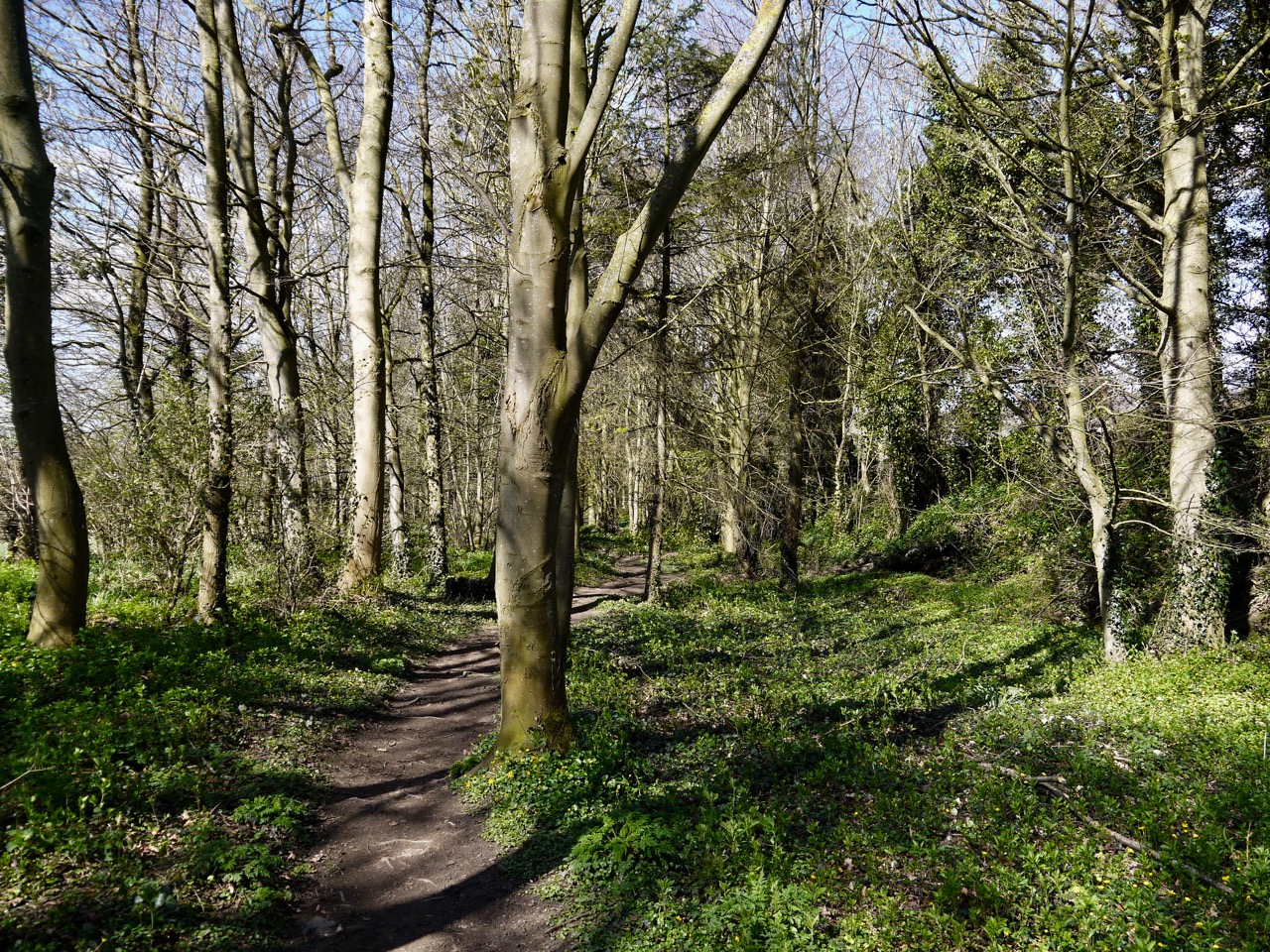