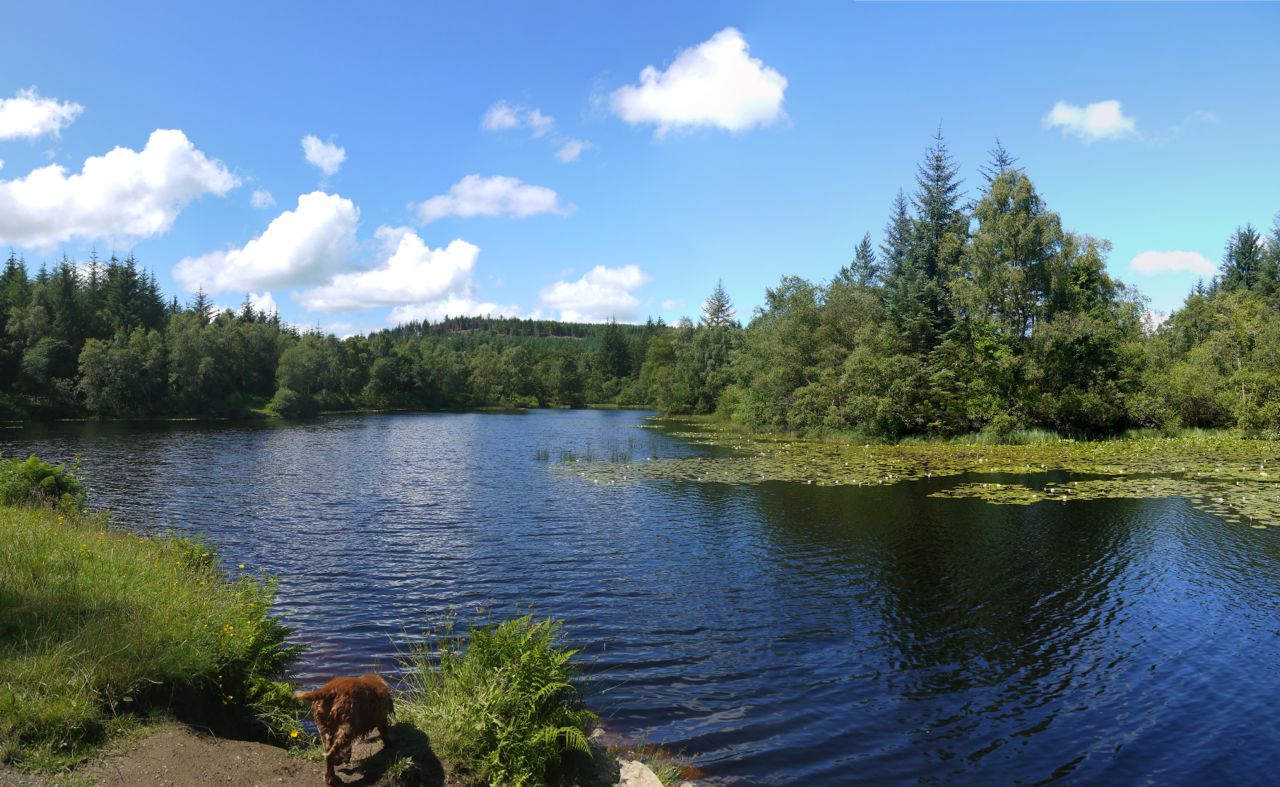 Work, a wedding, Arran’s whisky festival and fine-dining in Whitehaven had kept my walking boots idle for several weekends, so it was good to tighten the laces again and feel the crunch of leaves and twigs beneath my feet in the forest of Kirroughtree. The forest takes its name from Caer Uchtred, Uchtred’s fort, but if there is a fort, we didn’t find it. It does though have two sets of Rosnes Benches and one of the Seven Stanes so there would be plenty to search for.

We parked by the modern version of the fort, the visitor centre, paid our tribute (£3 in the pay and display machine), shouldered our packs and released the hounds. I had hoped to use an MTB trail map to find our targets but the “please take a map” box was empty. No problem, we would just follow the Yellow trail to the first set of benches and then look for the Red trail. We would look for signs to Bruntis Loch, for the Gem Stane, or the Anniversary Cairn. We were in no hurry and I was happy to wander about exploring the forest.  If only it had been that easy. There were no signs other than the coloured arrows of the MTB trails and to compound my navigational confusion I had thought that Bruntis Loch, being full of water, would be lying in a hollow rather than sitting on a hill.

But it was a lovely day. The sun was out and we spent most of the day walking in the shade of deciduous trees.

By the visitor centre a signpost read “forest walks” which sounded about right. We walked on passing several big signs for trails of various colours. As it turns out, the “forest walks” were not the trails we needed and the big signs were more of an statement of what existed than an indication of where the trails actually started. 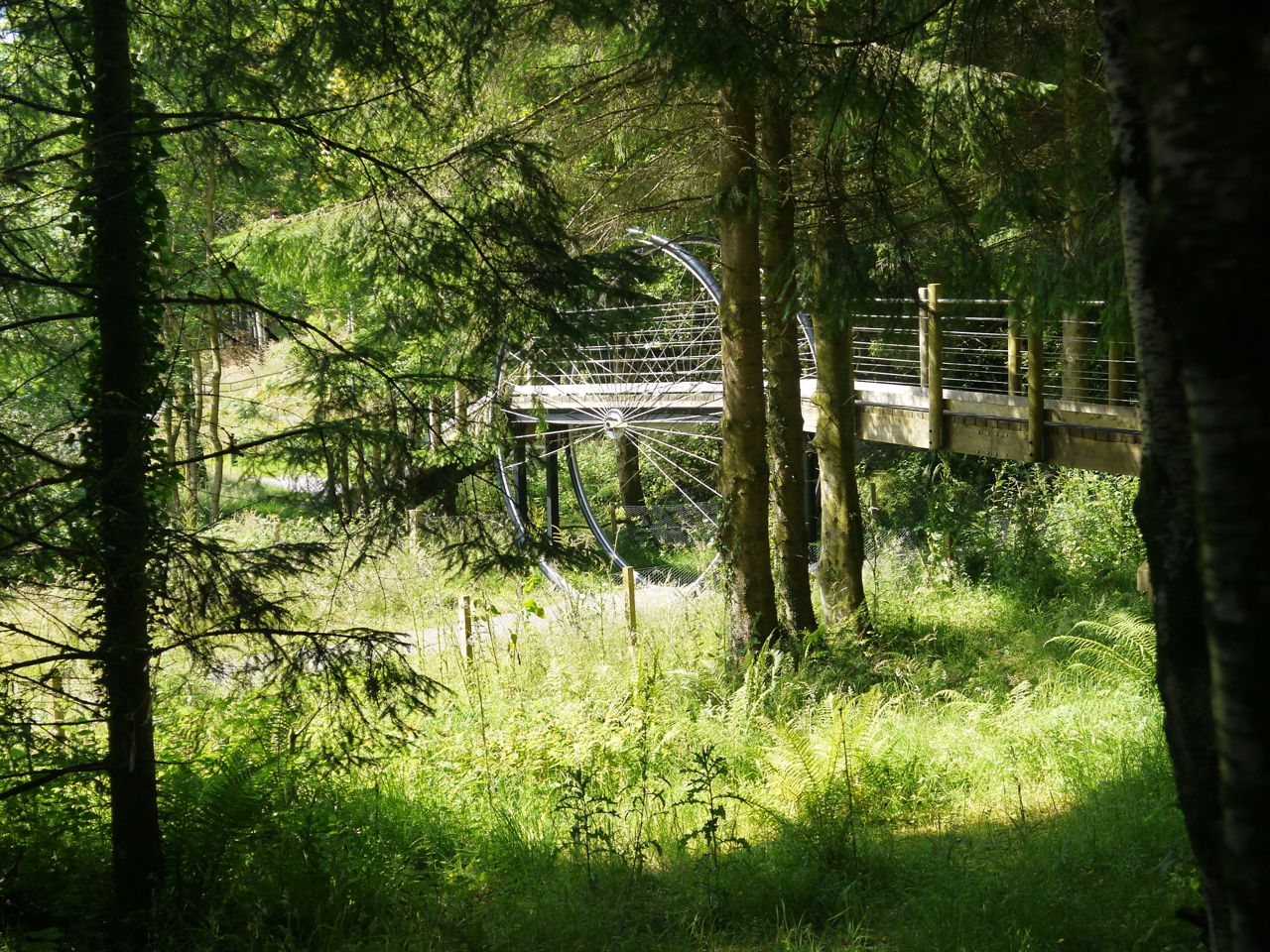 Our first foray took us along a footpath winding through trees and woodland clearings to the western edge of the forest. We tried to identify plants in the hedgerows while Eddie chased insects and Sweep snuffled in the undergrowth.  The single track road was free of traffic and we walked with trees to our left and Cairnsmore of Fleet filling the horizon to our right. I had hoped there would be an unmapped track to take us back across the forest but it was not to be. I had a look at a small path opposite Little Park Farm, but it soon petered out so we turned about and headed back the way we had come. The dogs enjoyed the run and we saw a variety of flowers so our time wasn’t wasted.

There were large stands of Bird’s Foot Trefoil, and certainly these seemed to be the predominant flower close to the visitor’s centre as well as along the road. I might have mistaken another patch of yellow as trefoil but when I got closer for a photo it was Meadow Vetchling. We saw hedge woundwort, that my flower handbook says has a pungent unpleasant odour but I would have just called it musty. (Apparently one has to crush the leaves to appreciate the unpleasantness, but why would we? PS I have since tried crushing a leaf while walking the dogs and can attest to its unpleasant pungency). A derelict area had hollows and mound covered with ox-eye daisies, and whenever I see these flowers, the phrase “gowans fine” springs to mind. Admittedly it was probably reading Wodehouse’s Wooster that planted it in my mind rather than the Bard’s works…

We didn’t exactly run about the braes, any plucking of the gowans fine was figurative rather than literal (since that would be illegal), but I definitely had weary feet after my wandering.

Back near the visitor centre we crossed the wheeled bridge and set off on our second sortie. This time I decided that we should head away from Cairnsmore of Fleet. We followed a forestry/MTB track but, as these are won’t to do, it slowly curved away from the direction we needed and within ten minutes it had led us to the southern edge of the forest and a public road. I preferred to avoid public roads so we turned about once more and headed back. A small footpath in the trees above us seemed promising and did lead us through a stand of bamboo, but proved to be a dead end. And no pandas.

As we headed back towards the visitor centre once more I began to wonder if there was some some form of enchantment hiding the paths from us. Where was the yellow MTB trail?

And then the enchantment lifted. We followed a gently climbing track and came to signs for the yellow trail. On track at last.

This trail led us to a junction where we stopped for a drink. There was a hollow beside the track that I would have thought was part of the natural landscape had there not been an information board with a drawing showing it, the Lade Holding Pool, in its original state.

The Lade was an artificial water channel which brought water from Bruntis Loch to this holding pool for use in smelting ore. There is now a trail following the route of the Lade, with several information boards along the way. Finding the trail was great for us since the Rosnes Benches website says “Take this small archaeological path and follow it for around 500m to some mature broadleaf trees where you will locate the … benches”.

We were at Lade Trail sign number 1, but the map showed that the signs were not in order. One way led to number 2, the other to 3-6. And we didn’t know which way we would find the benches. We headed around the remains of the pool and eventually found sign 2 at the beginning of the path, but no benches so, once more, we turned about and retraced our steps.

The path climbed on through the forest giving us views of he sea with the Isle of Man on the horizon. The bell heather was coming into flower adding a little pink to the greens and browns. And some more nipplewort allowed me to add to my collection of blurred photographs of that plant.

We found two Rosnes benches a few metres off the path when we were about half way to Bruntis Loch. The traditional bench photos were taken and I spent a moment with my eyes closed experiencing the surroundings then did the same with my eyes open. 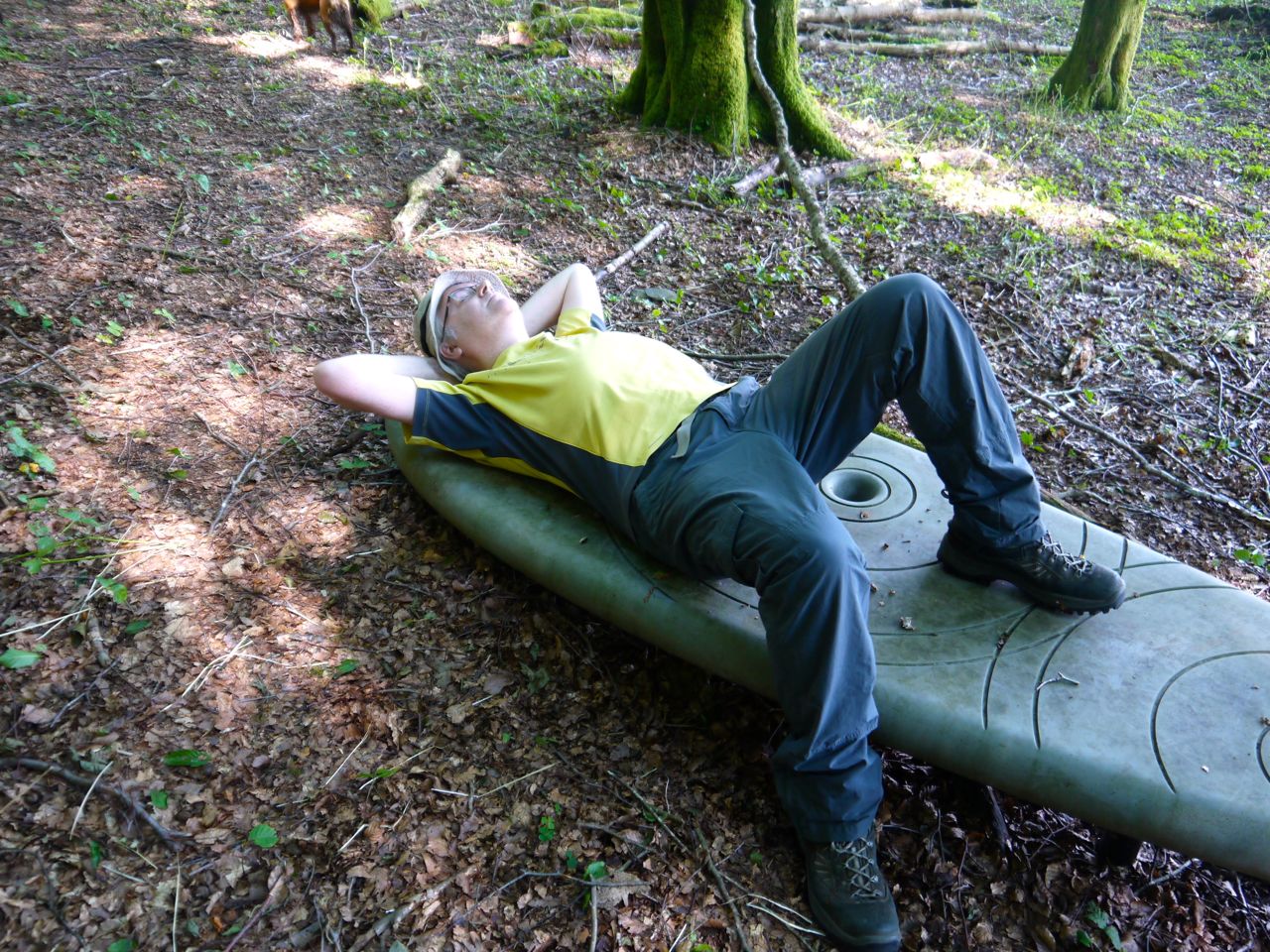 The benches seemed a reasonable spot for lunch, but insects did spoil it a little and I came out of lunch with a wet and muddy left leg, the dogs having knocked over the water bowl while I was filling it and Eddie climbing on my leg. Sweep used the opportunity to dig a hole and when he was done with that and realised we weren’t walking anymore, took to barking. That dog doesn’t hold with stopping. 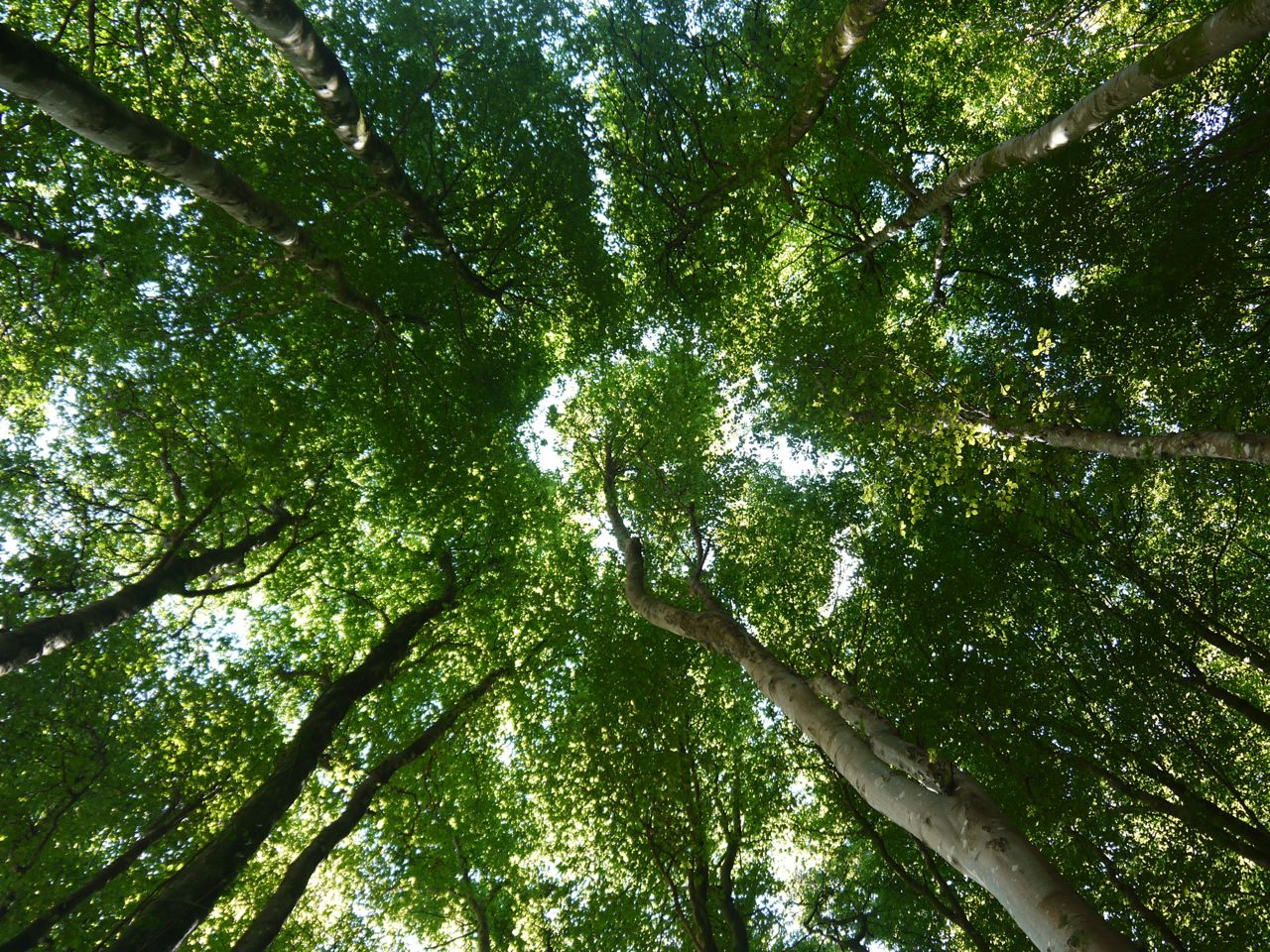 View from the bench

I like to have a photo showing all of the benches and when I moved aside to do so I noticed another bench, and then another, so there are four benches in all, but two had been hidden by a recently fallen tree.

Revitalised and rested we set off and were soon at the Bruntis Loch with its white and yellow waterlilies. This is actually a reservoir constructed in the late 1700s to provide a water supply for lead mining. The dam is overgrown but can still be seen as man made.

The dogs had a paddle while we took some photos and looked at the plants, which included a marsh cinquefoil. Then we set off for the Gem Stane, 1.75 tons of pink quartz which was across rather fancy bridge. I presume the Kirroughtree Stane is a gem because of the nearby Cree Gem Museum. 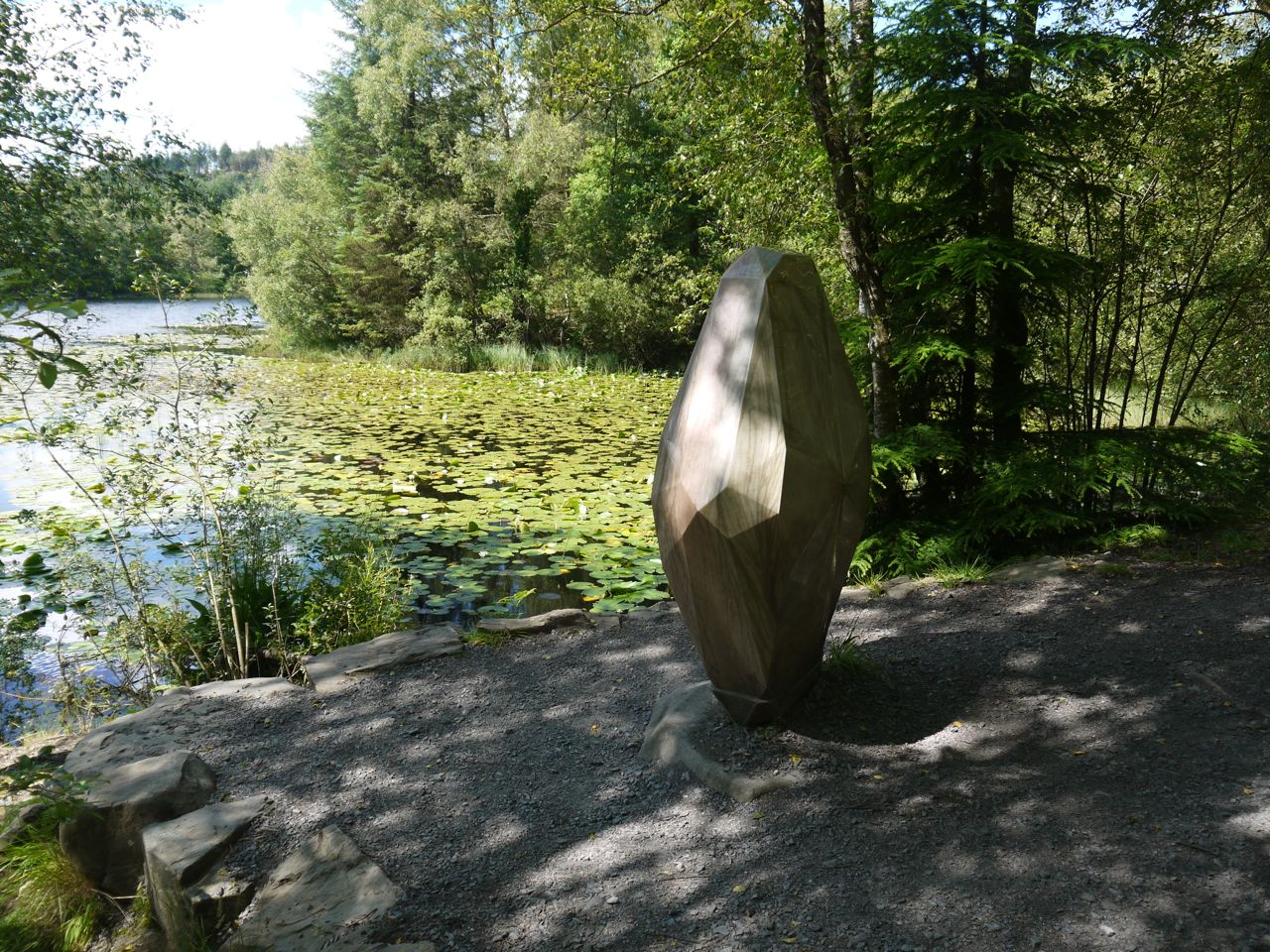 Lady luck then smiled on us and we found we were by the red MTB trail. But which way to follow it? This time the force was with us and after twenty minutes or so of forest walking we came to the anniversary cairn, a large pyramidal structure commemorating the 50th anniversary of Galloway Forest Park. 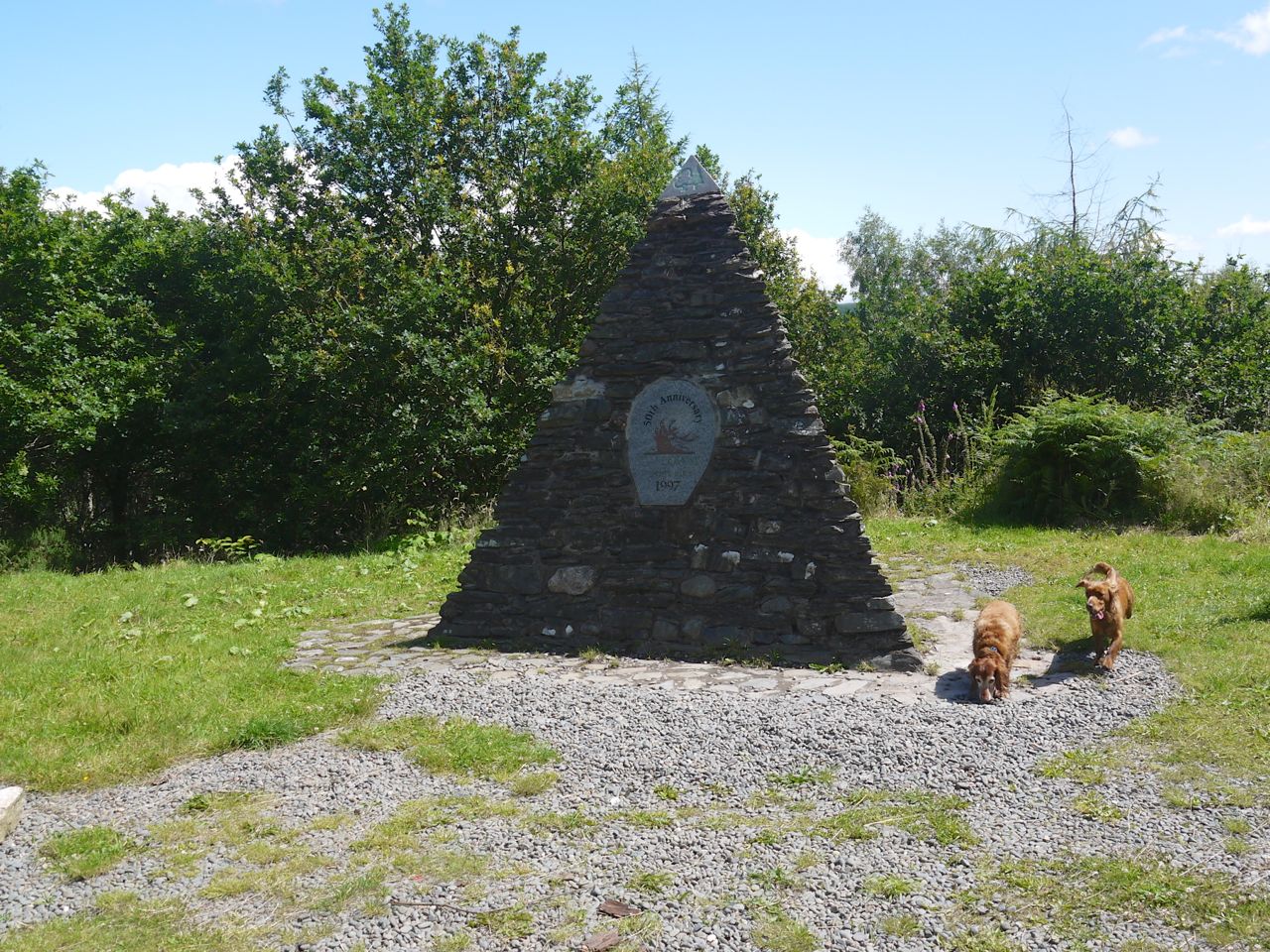 Kirroughtree Rosnes Benches were said to be below the cairn over a oak covered knoll. They proved a little tricky to find and were further from any path than other benches we have found. That said we found the two benches and rested briefly for our photos. 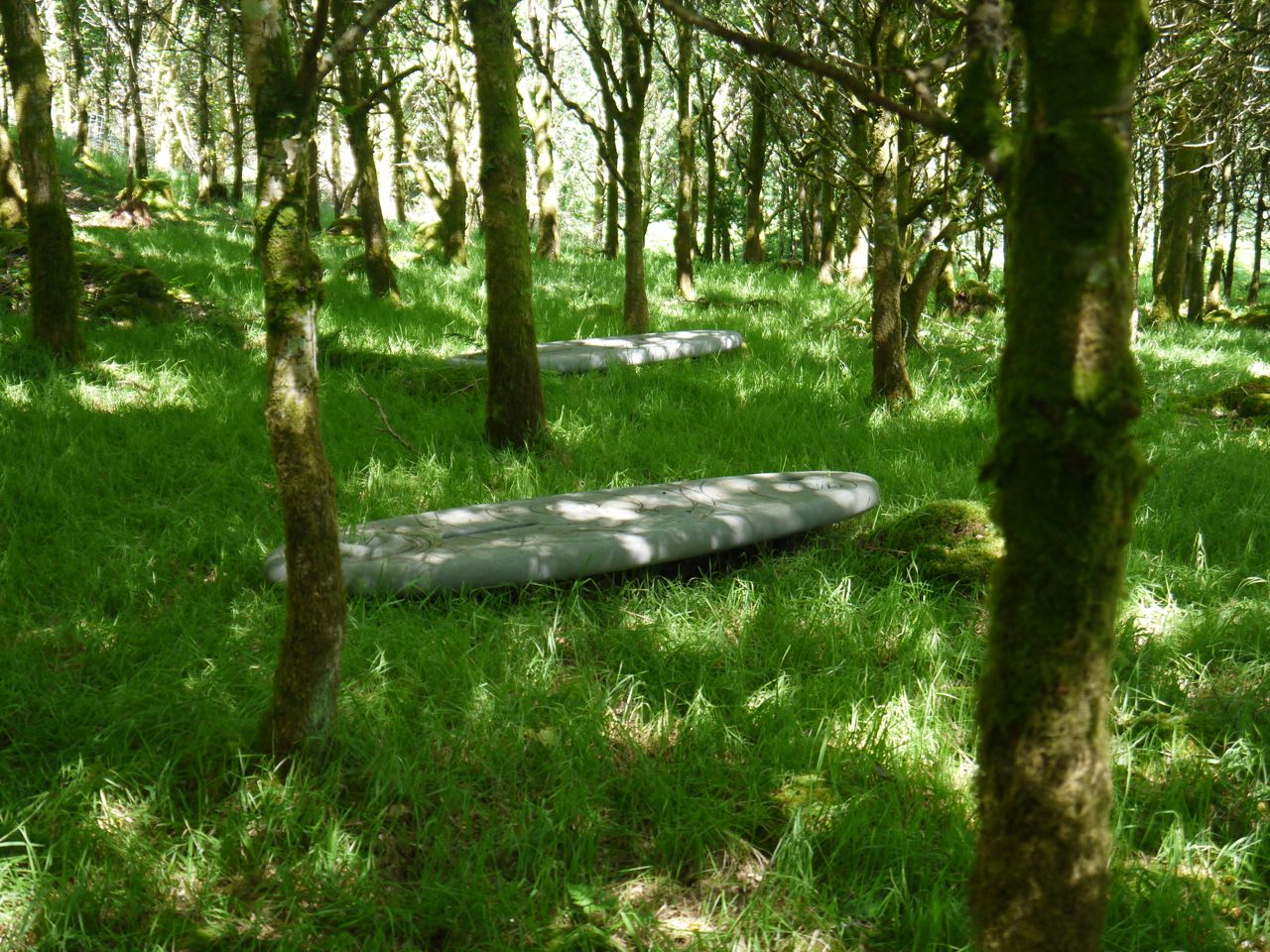 We then followed the red trail back down to the visitor centre.

Share this...
This entry was posted in Dumfries & Galloway and tagged 7stanes, Rosnes Benches. Bookmark the permalink.