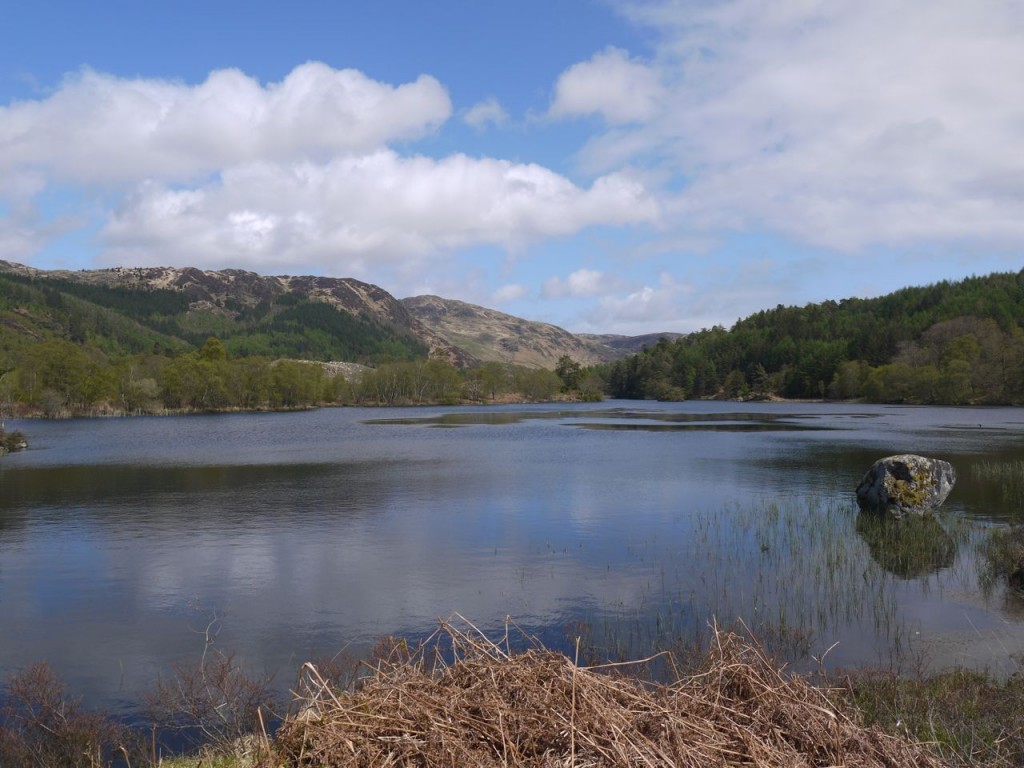 Another Rosnes Bench outing. I was keen this time to find the Covenanter’s Memorial that I had missed on the previous visit to Caldons when we were walking the SUW. We didn’t realise it when we set off but this was to be the Glentrool yellow waymarked route so there were no navigation problems.

The day started a little overcast and looking up to the sky with the wind to my back, the clouds were moving left to right so I predicted rain. Wind on your back, clouds left to right, weather’s not right. My walking partner dismissed this as an old wives’ tale, preferring to put her trust in the met office. Predicting rain in D&G is rarely wrong. 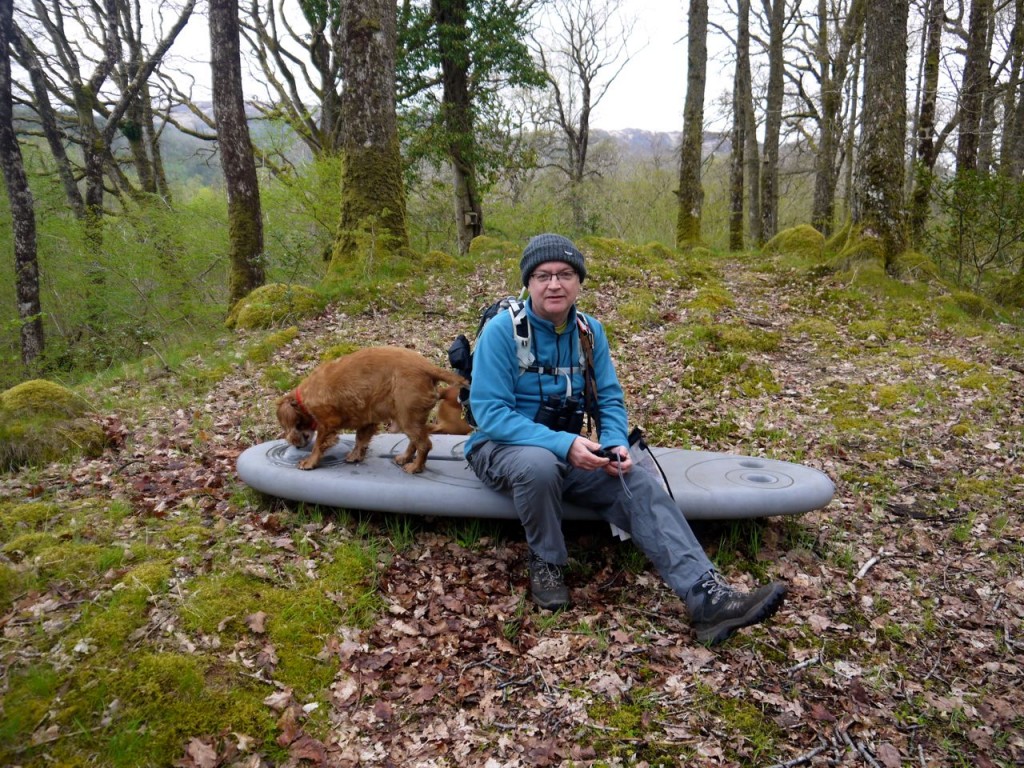 Crossing the Water of Trool bridge we turned west along the SUW, and almost immediately spotted three Rosnes Benches among the oaks, hazel and birch. I hadn’t really had time to get into “looking for the benches” mode and could easily have walked on past them. It was a bit too chilly to lounge on the benches so we took the necessary photos and moved on.

Next on my list of things to find was the Covenanters’ graves. I had not found these at the end of this SUW leg so I presumed they were a little way off the SUW, perhaps hidden in the woods. Imagine my surprise therefore to come upon a large sign “Martyrs Grave” by the path, and a very visible 1.4m high stone enclosure just a stone’s throw away. How we can have missed this I don’t know. I suppose back then we would have been walking for 6 hours and the bracken would have been higher, but all the same it was a bit of an observation failure. Perhaps it says something about me that I did notice the lack of an apostrophe on the sign. 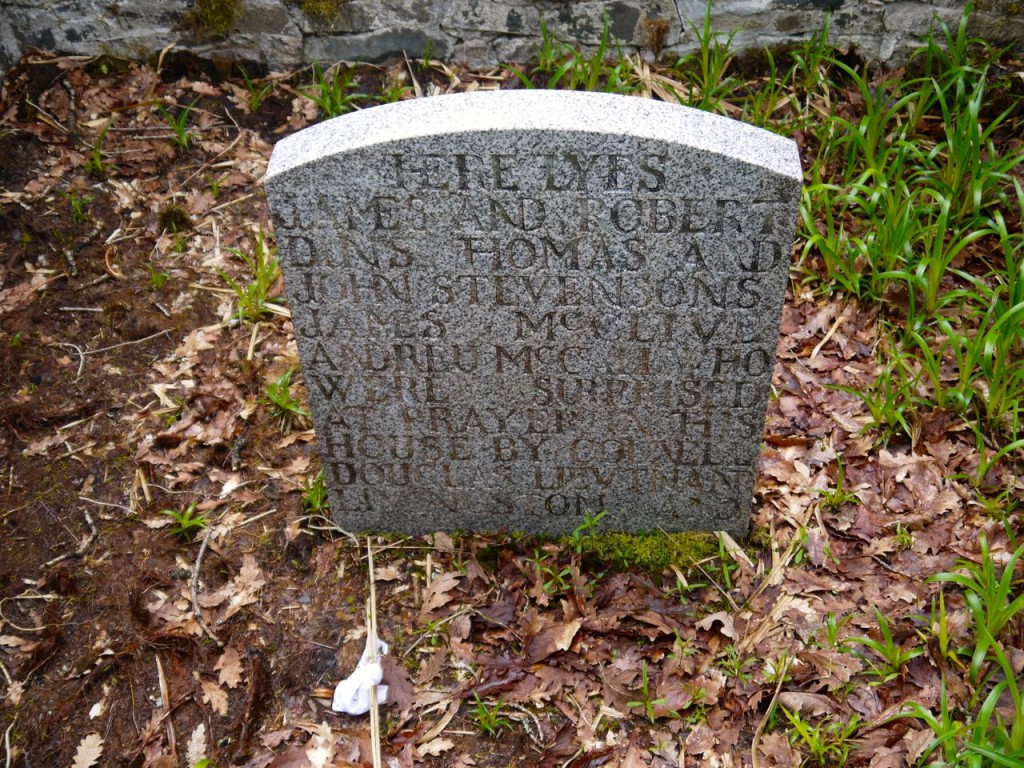 The walls of the enclosure were a little high for us to see over easily but there are plinths to allow the vertically challenged to get a view of the inside. A gravestone inscribed with the names of the dead stands within the enclosure and a plaque on the surrounding wall reads:

Malcolm Harper in Rambles in Galloway (1876) gives the story. “In the quiet of a Sabbath morn of January 1685, a few of the persecuted, undeterred by the rigour of the season, had assembled in the seclusion of this retreat to worship God according to the dictates of their conscience, when they were suddenly surprised by a troop of dragoons, under the command of Colonel Douglas, and after a brief resistance, six persons, James and Robert Dun, Alex. McAulay, John McLude, Thomas and John Stevenson, were killed. One of the party, by plunging into the lake, and keeping his head above water, covered by a heath bush, managed to conceal himself from the infuriated soldiers, and had a remarkable escape. Of the dragoons two were killed, one of whom. Captain Urquhart, was shot under rather peculiar circumstances. As tradition narrates, he had that morning, exasperated by the difficulties of the road, sworn a dreadful oath that he would be revenged upon the unoffending Covenanters. He had dreamed that he would be killed at a place called the ” Caldons,” and while approaching the cottage of a shepherd in search of fugitives, he inquired the name of the place, on learning which he gave utterance to a fearful oath, and drew up his horse, uncertain whether to advance or retire. At that moment a shot fired from the window brought him to the ground.” 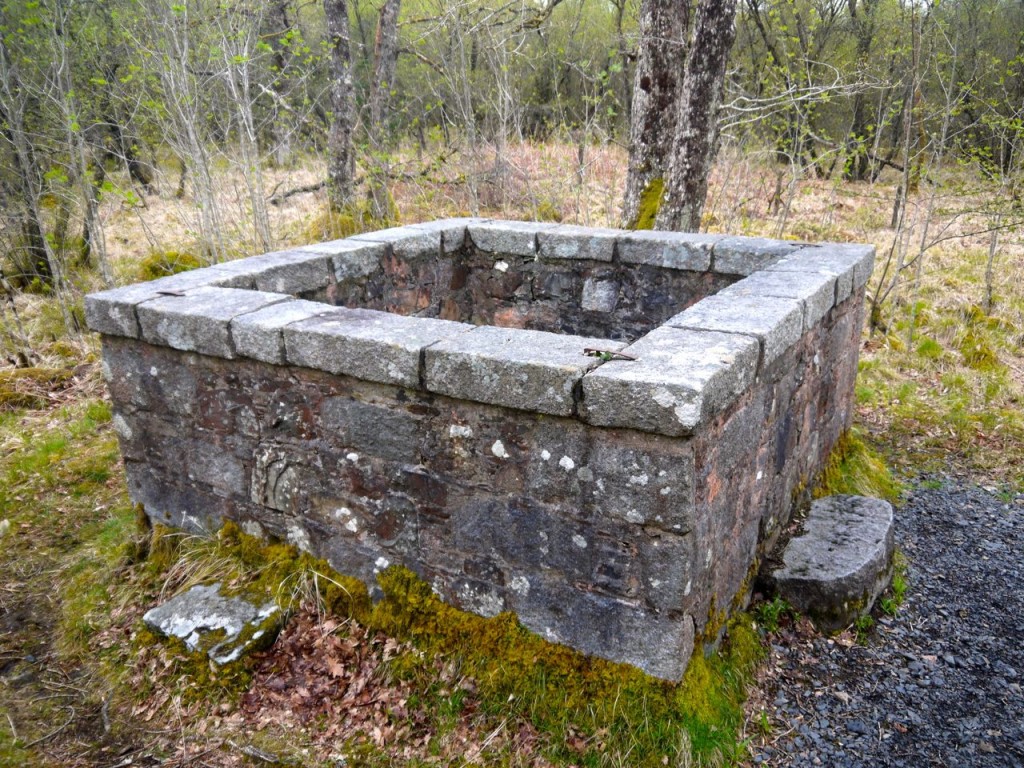 It is a peaceful place now, among the oaks and birch of Caldons Wood, silent but for wind rustling the trees and birdsong.

We continued along the SUW, over several mossy knolls with oaks in bud, their autumn leaves still on the ground. The woods then gave way to a more fen like terrain. The SUW here is a man-made path giving easy dry walking. The land beside it though was very boggy indeed. The dogs as ever felt the need to take a dip in the pools we passed. Some of these were black whereas others had crystal clear water.

Last week we had identified a shrub as bog myrtle and we now saw that large swathes of land were covered in this, with catkins but as yet no leaves. I look forward to seeing what this plant looks like later in the year. 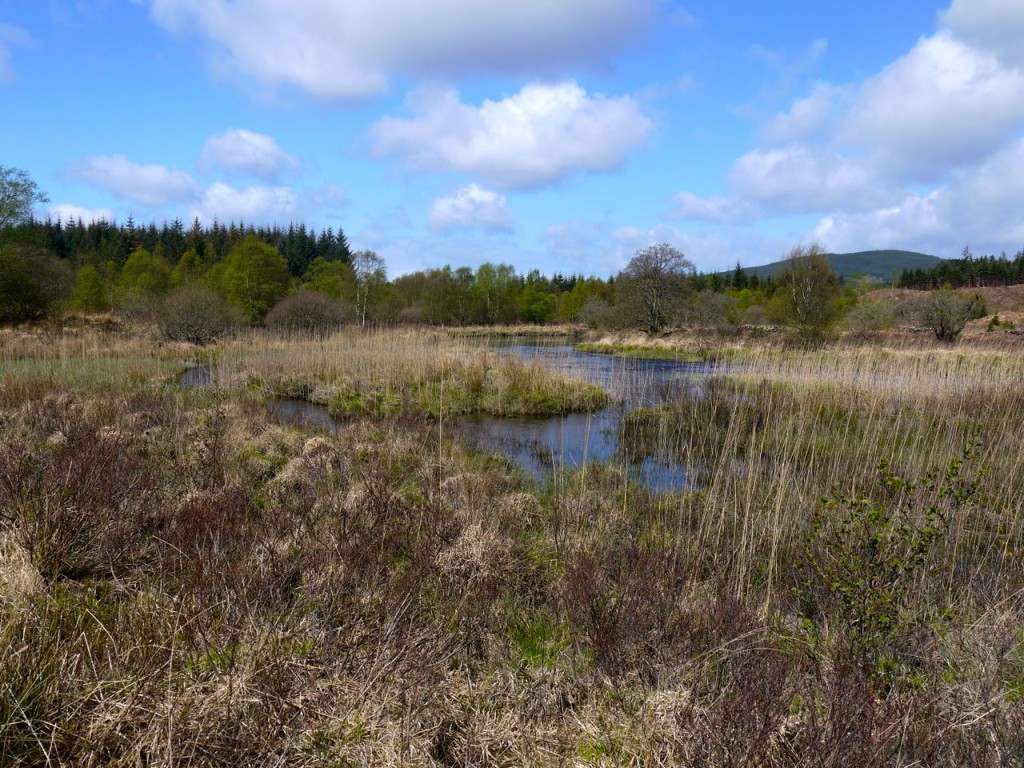 Water of Trool, bog myrtle in the foreground

As we made our way through the bog/fen safely on the artificial path we noticed a walker on the far side of the Water of Trool, his large rucksack marking him as an SUW walker. He shouted across to ask how far it was to a bridge. When told it was at least half a mile, perhaps further and he looked dejected. He had followed what he had thought was the correct route, and when the path petered out he had persisted and was now walking through very unpleasant terrain. I suggested he leave the river and strike out for the nearby road and he agreed.

This reminded me of our own SUW experiences.  Beguiled from the true route by the SUW’s version of sirens. Paths that take you into increasingly difficult terrain and then fade away often leaving you able to see where you should be, but with something preventing you getting there. We can laugh about our own SUW experiences now but I know how that walker felt.

When we got to the footbridge over the Water of Trool just short of where it joins the Water of Minnoch I had a look at the signs to see how easy it might have been to mistakenly cross the bridge if one was following the SUW, and the waymarker posts seemed pretty clear. But then we did walk right past the graves at Caldons without noticing them. The SUW experience wouldn’t be the same without some route errors.

The next section was the same riverside track we had walked the previous week, but now the bluebells and wood anenome were coming into there own. Sweep went in for some major undergrowth snuffling here but came away with nothing more than a muddy face.

We had another look at the waterfalls near Stroan Bridge then rejoined the yellow route on the far side of the visitor centre car park. The return section which is initially through felled forestry but on a very easy path, then zig-zags down through deciduous trees and back to Caldons. It passes just below the Spout Head Waterfall on Torr Lane. Why this wee burn is named a lane I don’t know. Lanes are waterways “of which the motion is so slow as to be scarcely perceptible” and that does not describe this stream.

The county flower of Wigtonshire is Yellow Flag, but not the type of yellow flag we found along the route. 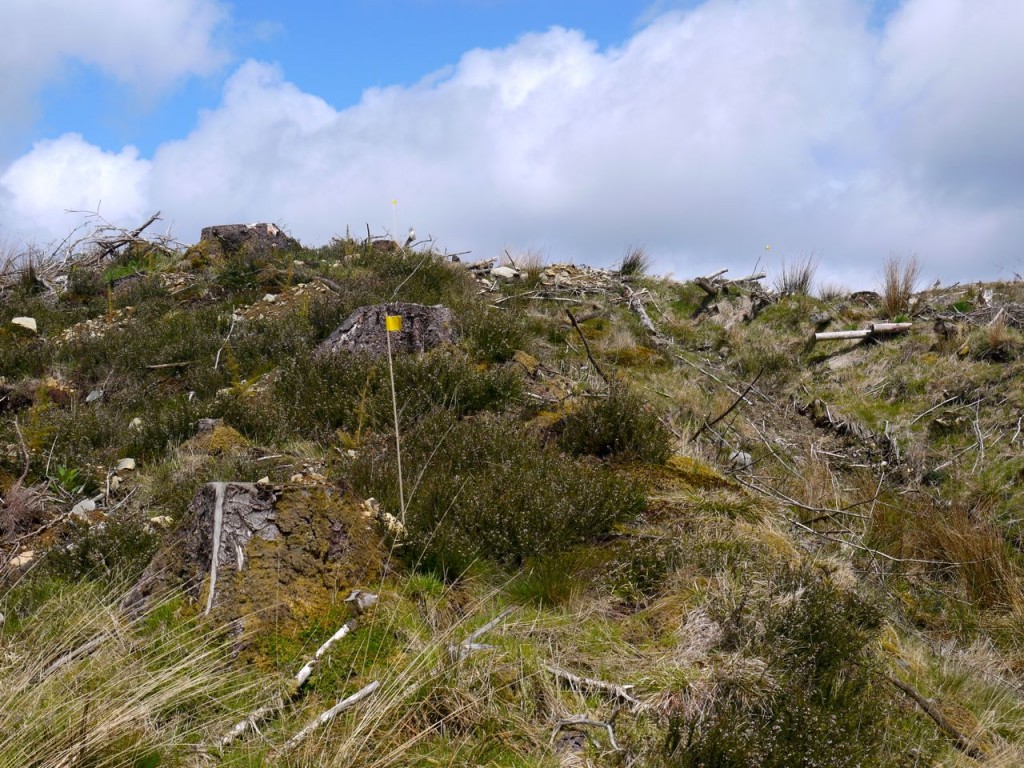 Not the right yellow flag

We came upon a sign of things to come in this area recently cleared of conifers: several dozen deciduous saplings: maple, sycamore etc. 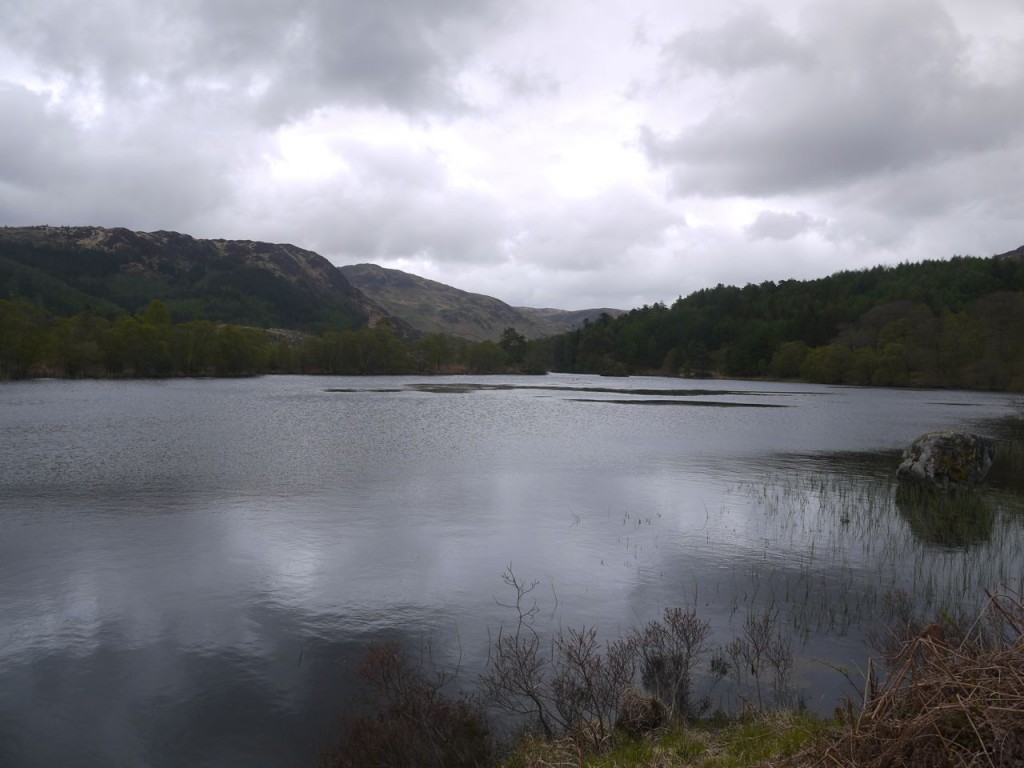 Loch Trool, the photo at the top of the post is twenty minutes later

Once back at Caldons we headed into Kenmure Woods along the Loch Trool trail and found a couple of large boulders beside the loch to sit on for lunch. A couple of dozen swallows were skimming the water and we watched them through binoculars. Once we sat down though, they came much closer and their jumbled chattering was our lunch soundtrack.

Share this...
This entry was posted in Dumfries & Galloway and tagged Rosnes Benches, SUW. Bookmark the permalink.