Mystery above the Laggan’s Loch 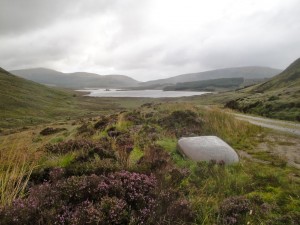 I have both driven and walked the road from Clatteringshaws past Craigencallie, but have never actually spotted Craigencallie House, where I planned to park. It was the same today. I must have driven past it again and therefore cheated a bit by driving almost a mile past Craigencallie and parking when I found a wide enough section of road.

The Southern Upland Way was to be my route but I spotted only one SUW sign and that was at the beginning where a locked gate prevents cars heading up towards Loch Dee. Within 5 minutes of setting off, the heavens opened so I packed the electronics away and deployed waterproofs. For some reason this seemed to set off Sweep barking, and he really put effort, and endurance, into it. Needless to say, the downpour was short-lived but I thought taking off the waterproofs would be tempting fate. They helped when the buffeting wind arrived.

This walk is relatively flat and the first half mile or so has trees either side of the road but after that the view opens up, or would do if it was less misty. Black Water of Dee can be seen winding across flat ground that I presume will be marshland. The Dungeon Hills, Craignaw and Dungeon Hill itself, occasionally appeared from the mist, while Craiglee was always visible. Ahead of us were Curleywee and Lamachan with Mulldonach peeping through the mist at times. I had hoped that the Silver Floe would be visible but it is hidden behind Ellergower Knowe.

Loch Dee with its peninsulae comes into sight as the track rises and is an accompaniment throughout the walk. Malcolm Harper in Rambles in Galloway (1892) wrote:

Loch Dee is a lonely mountain lake, in a treeless waste, about five miles north-east of Loch Trool, and is only approachable by the pedestrian, or by very rough bridle roads. Heath and moss, rocks and stones without end, and jagged hills, with here and there bright verdant patches on their rugged sides, form the chief features of the landscape.

Agriculture is nowhere to be seen, and the traveller might in a day’s walk not alight on a human habitation. The whole region being one vast sheep farm, only here and there a solitary shepherd’s sheiling is to be found in low sheltered places. The district is not opened up by roads, and its interesting character is but little known — its solitudes being seldom trodden save by the shepherd, the sportsman, and the student of nature.

Nothing can be greater than the contrast betwixt Loch Trool and Loch Dee. The former, surrounded by sylvan woods and bright verdure, merits the appellation of the southern Trossachs, while the latter, in the vicinity of Buchan’s gloomy dungeon, is a “Ruder and more savage scene, Like that which frowns round dark Loch Skene. “

A liitle past a track heading south is an anglers’ lodge with a sign reminding anglers that there is a two two fish limit, and that water bailiffs patrol the area. I didn’t see any, but perhaps they keep a low profile. “Lodge” might give the wrong impression about this building, it actually looks more like a large garden shed. Nearby and facing the Loch is a wooden bench dedicated to Dr Robert Donnan Borthwick. The bench is well placed for views, though today the Rhinns of Kells were lost in mist and the Dungeon hills were only just visible. I’ll have to come back when the sun is shining.

The path turns away from the Loch to a bridge over the White Laggan Burn,  and the White Laggan bothy can be seen sitting up on the lower slopes of Curleywee. The bothy had a saltire on its wall. Black Laggan was less easily spotted since it is a ruin about 100m off the path. I think in better weather I would walk up to have a closer look at each of these. A laggan is a hollow and this hollow lies between Curleywee (the hill of the wind) and Millfore (the cold hill). Why there is a Black and White Laggan, I don’t know.

Overlooking Loch Dee near its western end is one of the national cycleway signs. The hills you see behind it are the southernmost of the Rhinns of Kells, Meikle and Little Millyea and Darrou.

The path then climbs around the lower slopes of Curleywee’s northern end, White Hill. This is one of the ways onto Curleywee but certainly looks steep. The 7 Stanes Giant Axe Head is about a mile past the cycleway sign. This has runic text carved on its surface. I believe this is supposed to be an ancient Irish Poem by Amergin. It is called The Mystery. 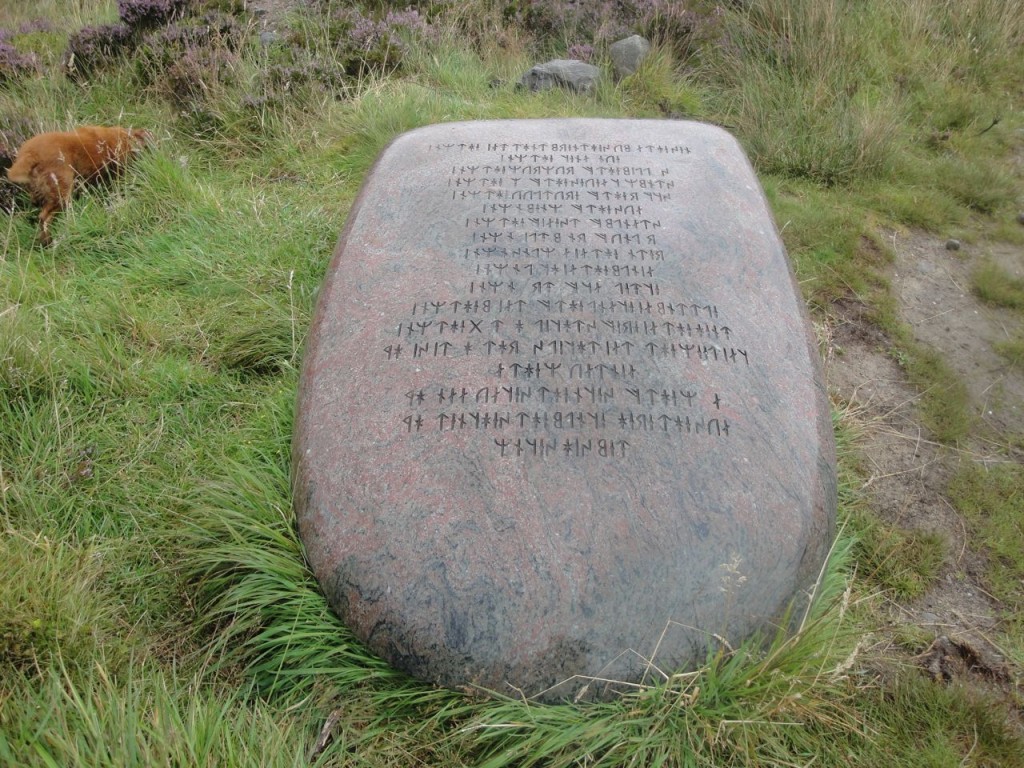 I am the wind which breathes upon the sea,
I am the wave of the ocean,
I am the murmur of the billows,
I am the ox of the seven combats,
I am the vulture upon the rocks,
I am a beam of the sun,
I am the fairest of plants,
I am a wild boar in valor,
I am a salmon in the water,
I am a lake in the plain,
I am a word of science,
I am the point of the lance of battle,
I am the God who created in the head the fire.
Who is it who throws light into the meeting on the mountain?
Who announces the ages of the moon?
Who teaches the place where couches the sun?
(If not I)

Unfortunately the light was poor and with the mist and rain the whole area certainly seemed a rude and savage scene. It was not conducive to photographs, or to sitting and eating sandwiches, so I turned about and headed back. It was on the way back that I managed to spot Black Laggan’s ruins, which I had not noticed on the way up.

I decided to walk down to the Loch side, so followed a branch path down to a small promontory that looks to have had a large campfire on it. At the end, the water looked quite deep. As I stood wishing the surrounding hills would appear from the mist, Sweep decided to jump in and then found he couldn’t jump high enough to get out. I thought I might have to get into the water to get him out but managed to grab him by the scruff of the neck and hike him out.

Share this...
This entry was posted in Dumfries & Galloway and tagged 7stanes, Low Level, Paths, SUW. Bookmark the permalink.