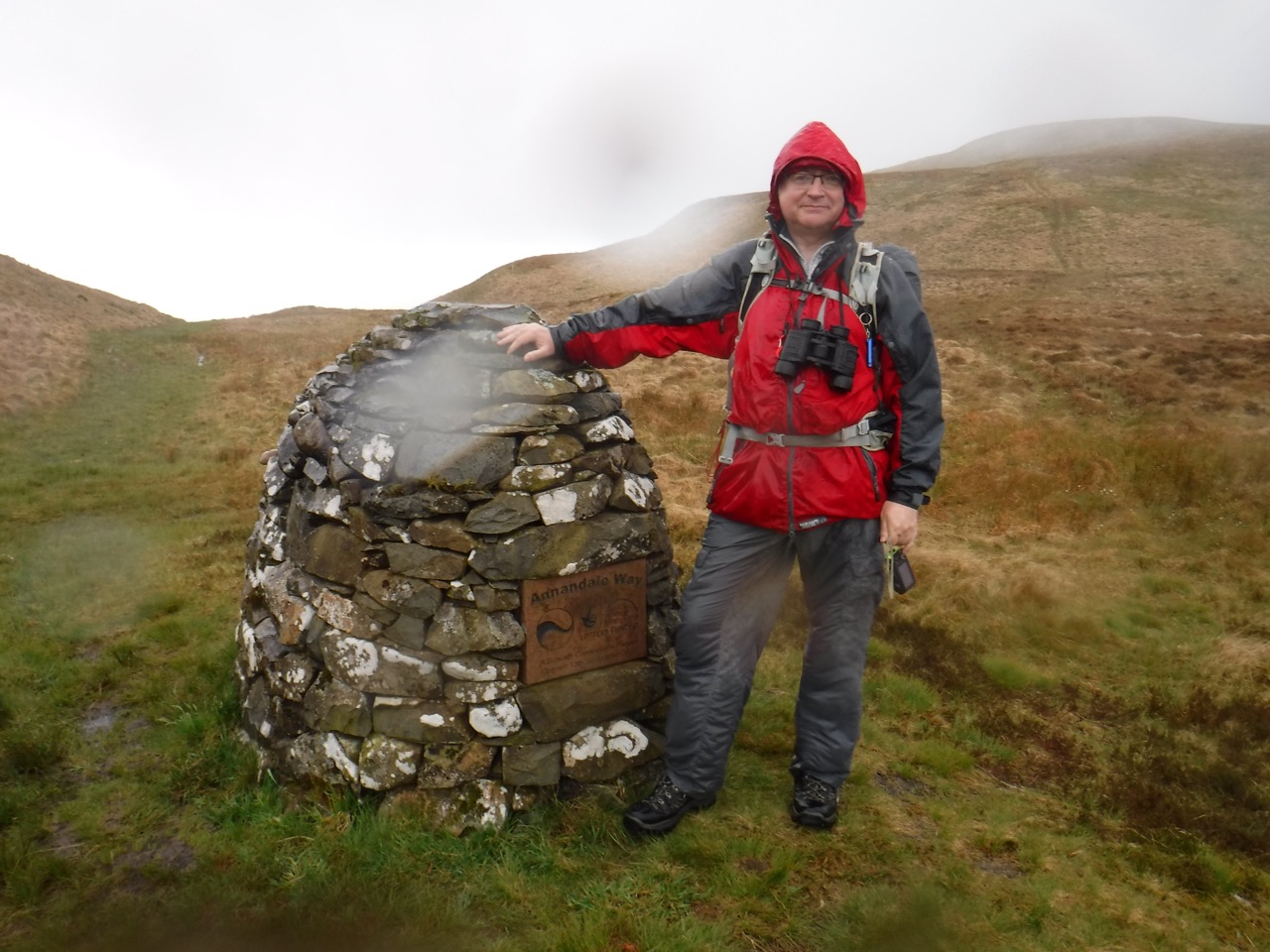 This, the first section of the Annandale Way, starts and ends as Riverside walk, beneath trees and with a wildflowers all around. There were mallards walking in the car park and pied wagtails darting about. 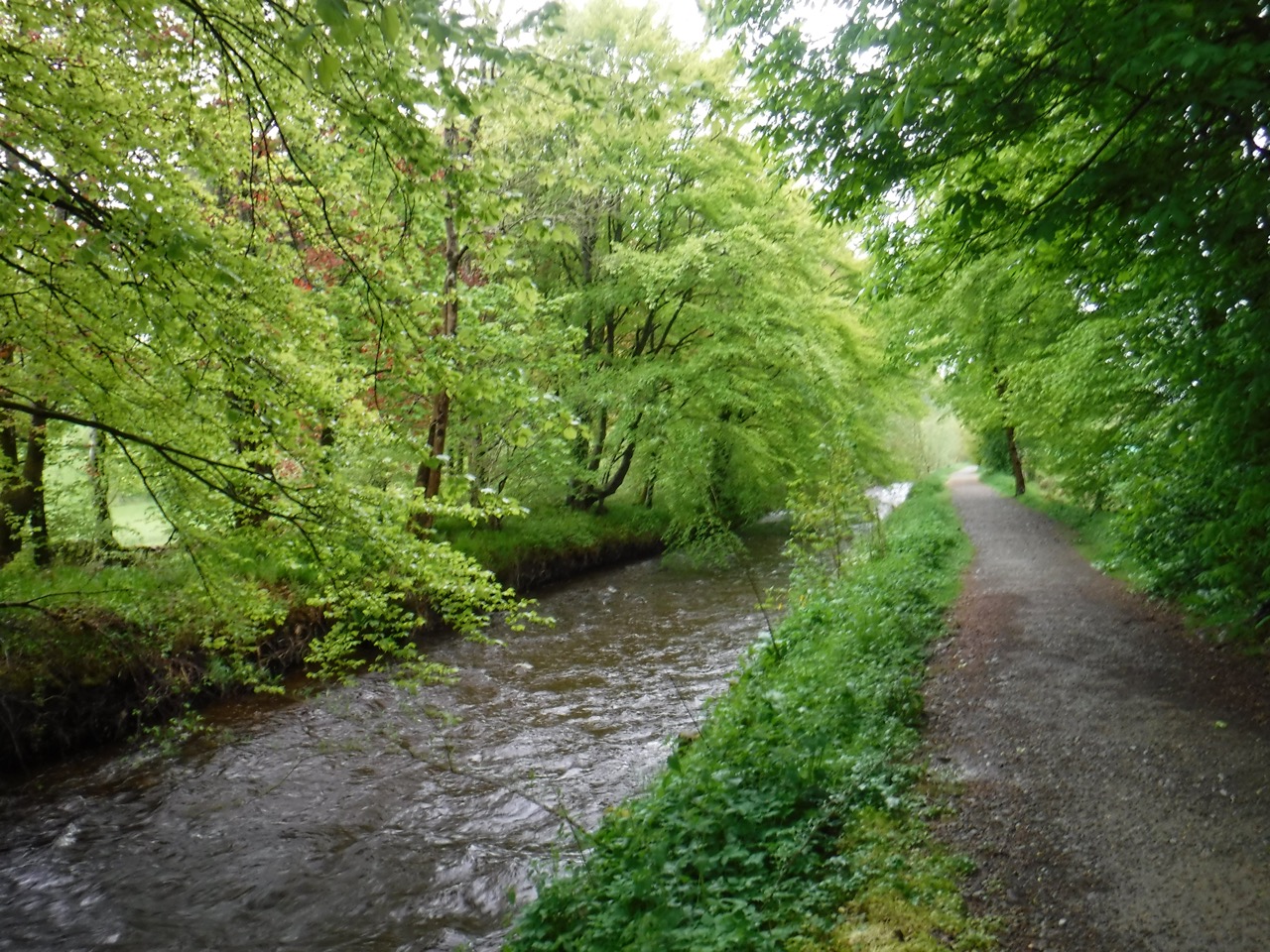 Given my interest in wildflowers we made slow progress beside the river checking out the various flowers, which included yellow archangel, orange and yellow Welsh poppies and White Comfrey. The way passes under the A701 and a sign under the bridge told us we were on Dr Watties’ Walk, restored in 2008 and dedicated to the late Dr W J Gillies.

Eventually we left the riverside walk at a kissing gate near Adamsholme, and followed the AW sign to cross a field and join the minor road. If you reach the footbridge on the river you have missed this turn off. 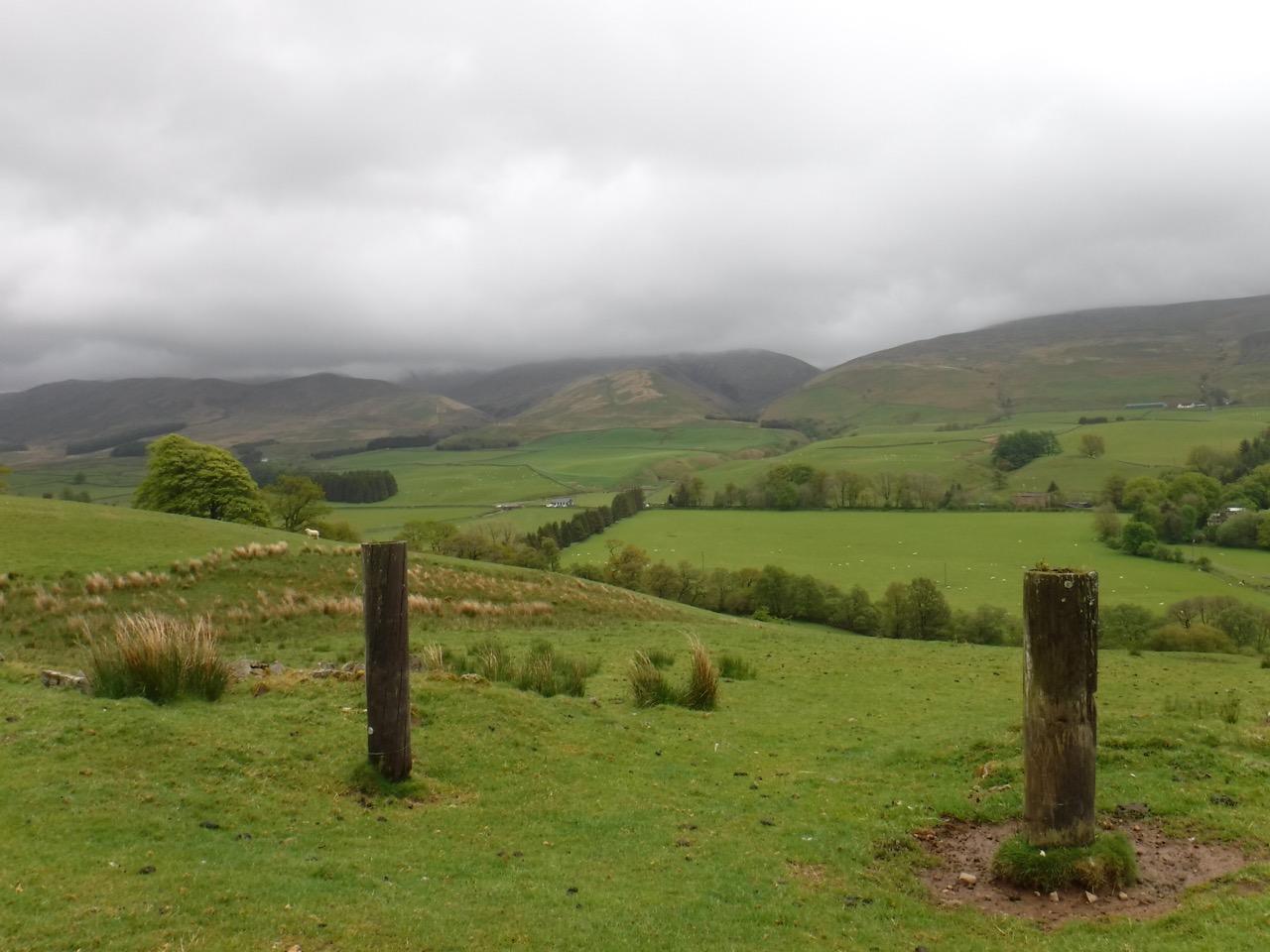 We stopped at the turn off to Gardenholme to check the map then continued on to fork left at an Annandale way sign crossing the river and heading for Meikleholmside. The track gradually climbs up the slope beside a wall, through fields full of ewes and their lambs, each numbered such that the lamb with 57 on its back was running alongside the ewe marked with the same number. we forded several small burns, then a more substantial one where the only good stepping stones were right on the edge of  drop, forcing us to choose between good stones where a slip would tumble you down a rocky gully for broken bones or submerged stepping stones where a slip would leave one sat in the stream. An easy call. After this ford the fields became less grass and more moorland, but with cuckooflowers growing in the boggier bits. 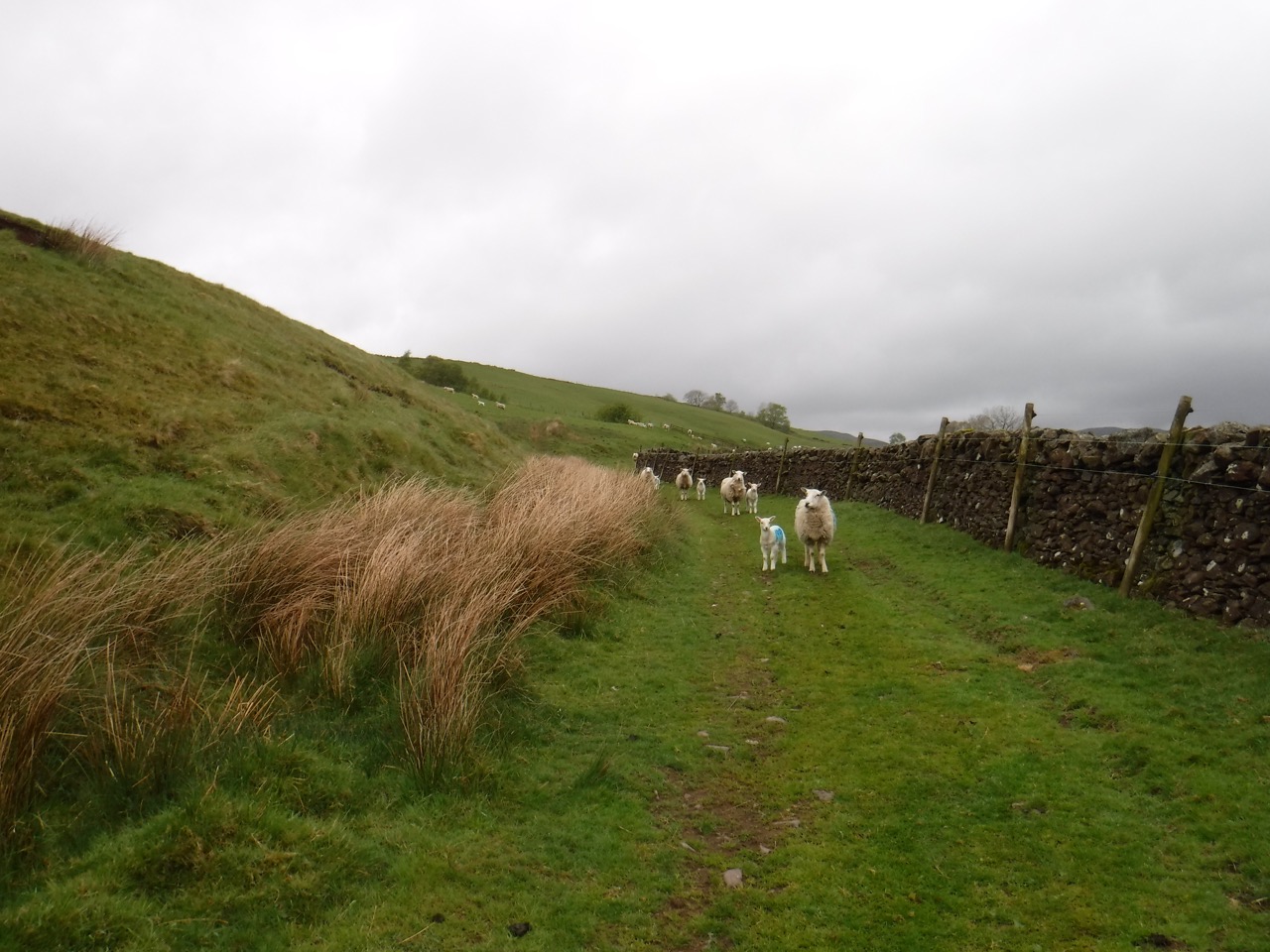 We had seen the clouds rising and falling, sometimes revealing the misnamed Chalk Ridge, but never deigning to show us the summit of Hart Fell. As we climbed towards the road though, the cloud descended and we walked into blowing wisps of mist. The precipitation that had been an occasional raindrop could now definitely be termed rain. 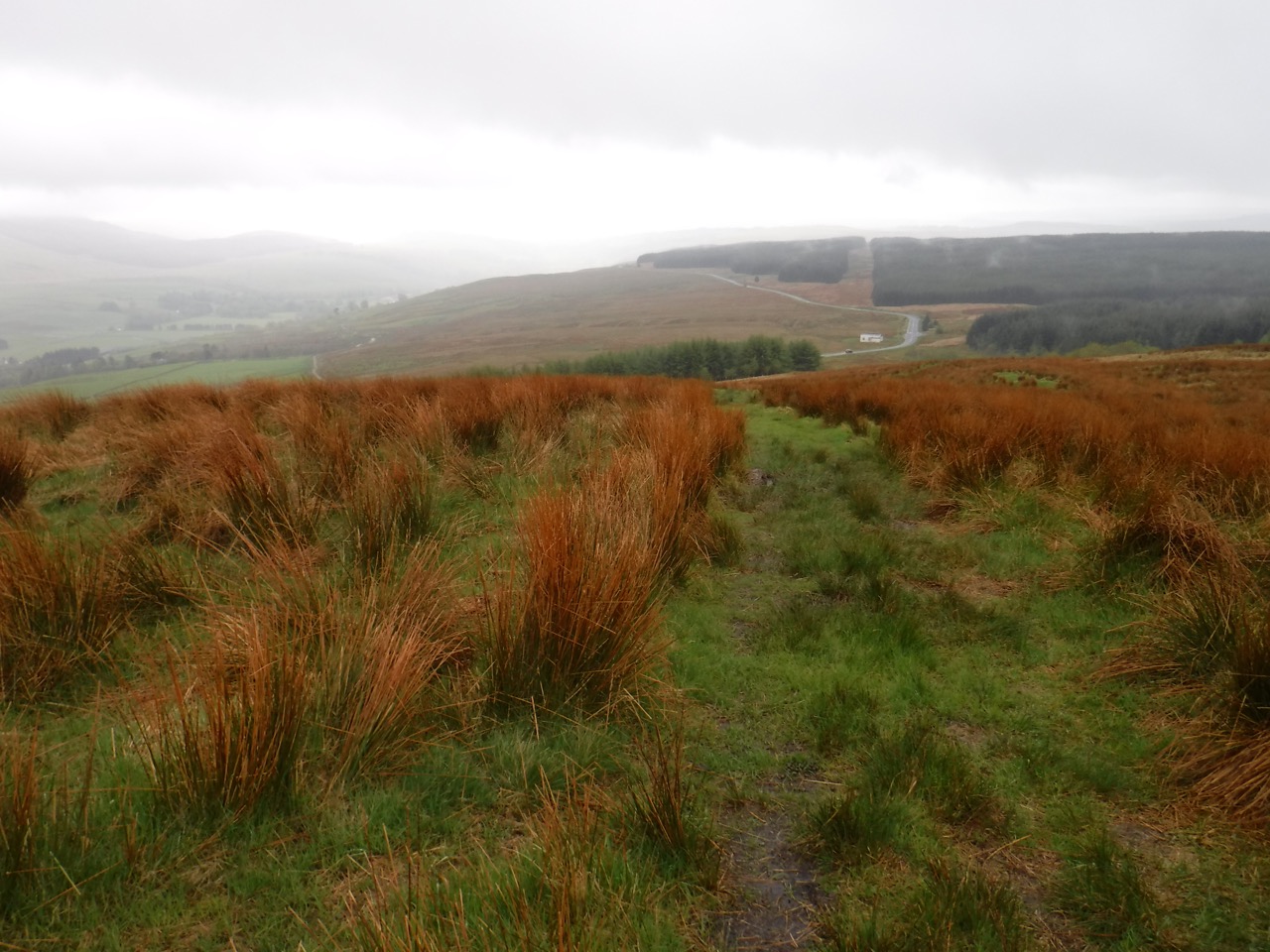 We crossed the A701 and continued a slow climb up Ericstane Hill with billowing mist blowing through the nearby trees. The route teased us with several false summits. “Almost there”, I would think, then a few steps on I would realise that I wasn’t there, but I was almost there, then realise that I wasn’t there, etc. We decided not to walk up to the actual summit of Ericstane Hill, though we might have done if the weather was going to offer better views. Another time perhaps.

The walk back down to the A701 was much boggier than the ascent. Grass was replaced by sphagnum moss and the trail was wet enough to allow several inches of submersion for footfalls, so we walked on the less boggy moss a little way off the trail. 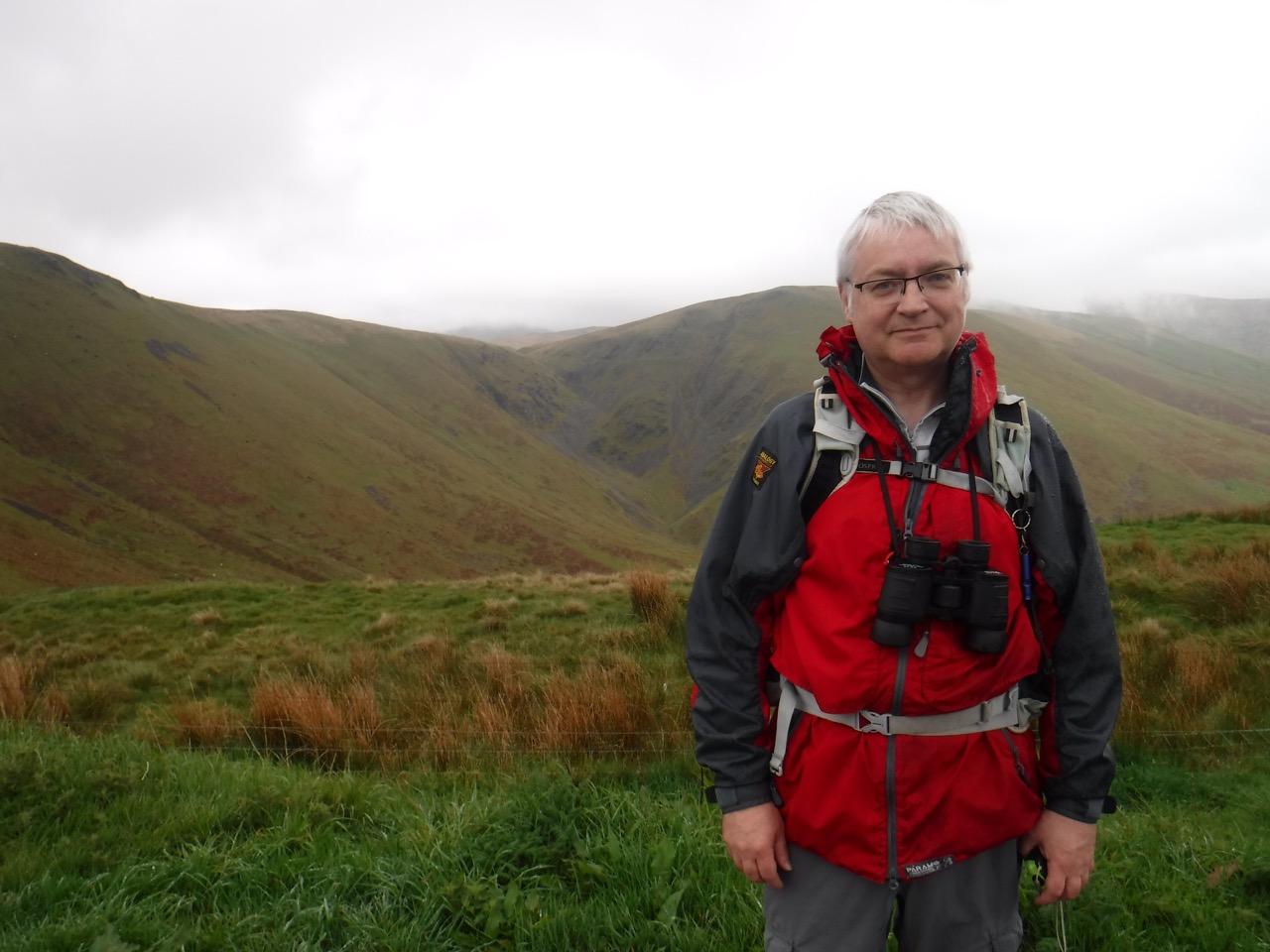 At the Beeftub, in a lull in the rain

At the A701 we had a look down into the Devil’s Beef Tub, described by Scott as looking “as if four hills were laying their heads together, to shut out daylight from the dark hollow space between them. A damned deep, black, blackguard-looking abyss of a hole it is”.  We were wishing that the weather could have been better for our photos, but perhaps the cold and mist added to the atmosphere and might even have enhanced our experience?

I had thought we might have a break for coffee here but we decided instead to press on, get the climb up Annandale Hill under our belts, and then have a rest. So on we went. The lower section of the climb was very waterlogged requiring some minor detours until the gradient increased. The section beside the trees is the steeper so I was looking to the top of the tree line as a sign as to where the gradient would ease. The rain returned as we climbed but not enough to seriously need waterproof trousers. 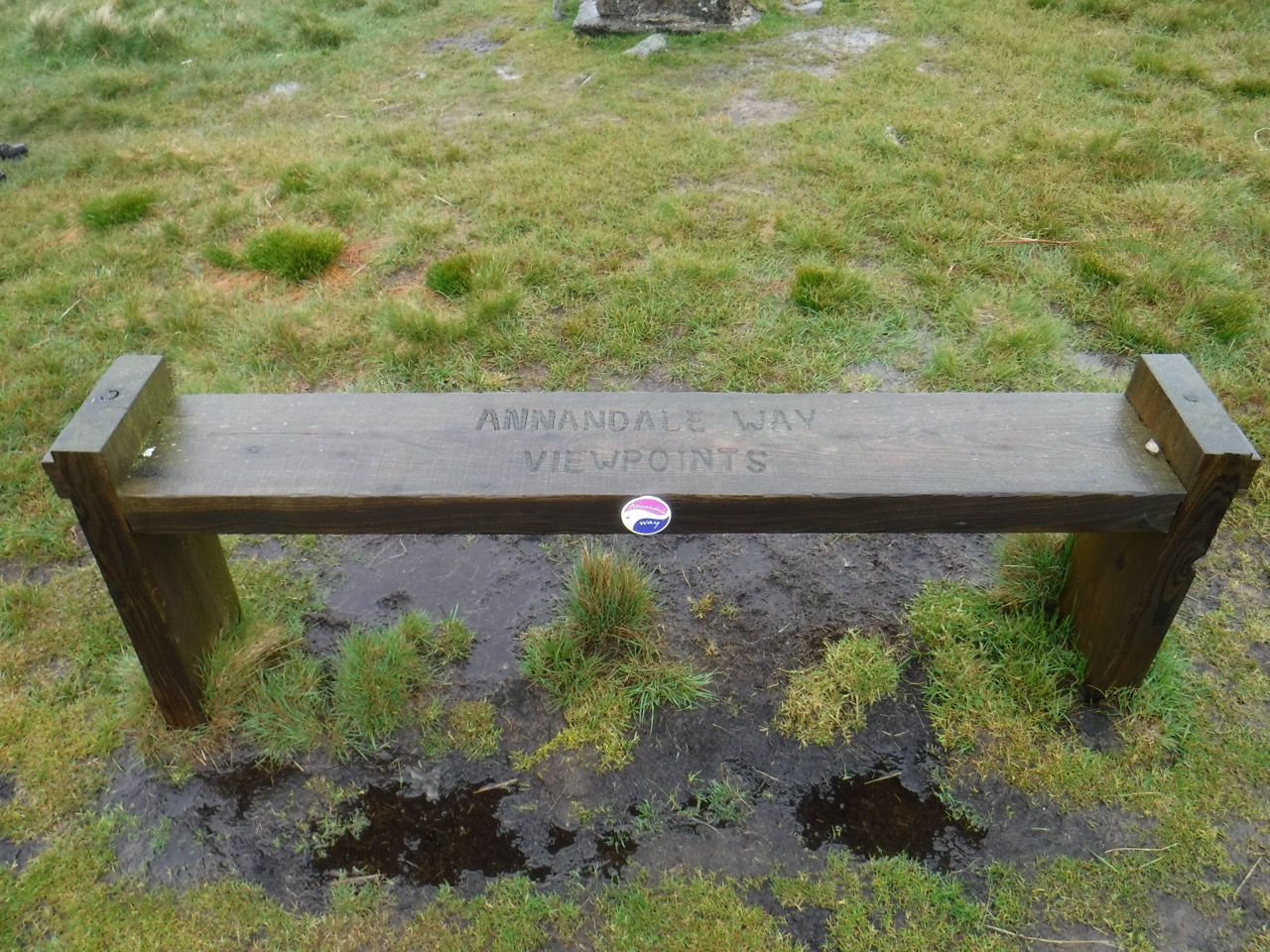 The top of Annandale hill has an old trig pillar and a newer wooden bench inscribed with “Annandale Way Viewpoints”. The ground was less waterlogged here but as you can see from the picture, that doesn’t mean it was dry. Despite the rain we decided it was time for a break, so we got out our waterproof seats and sat in the rain, enjoying the views which were admittedly both limited by the weather but also annoying in that we could see sunshine in the valley we had walked up in rain, sunshine in the bowl of Tweed’s Well and sunshine on the wind turbines north of Daer.

We were now on upland moor and had left the profusion of wildflowers in the valley. But the Deer Grass was in flower on he ridge, cotton grass could be seen in the wetter sections and tormentil added a little colour. Small birds were flying along ahead of us, flashing a white bum then swooping into the grass, making a noise like an old modem, and usually too far away for definite identification But eventually a pair did stay close enough for a good look with the binoculars. Wheatears. 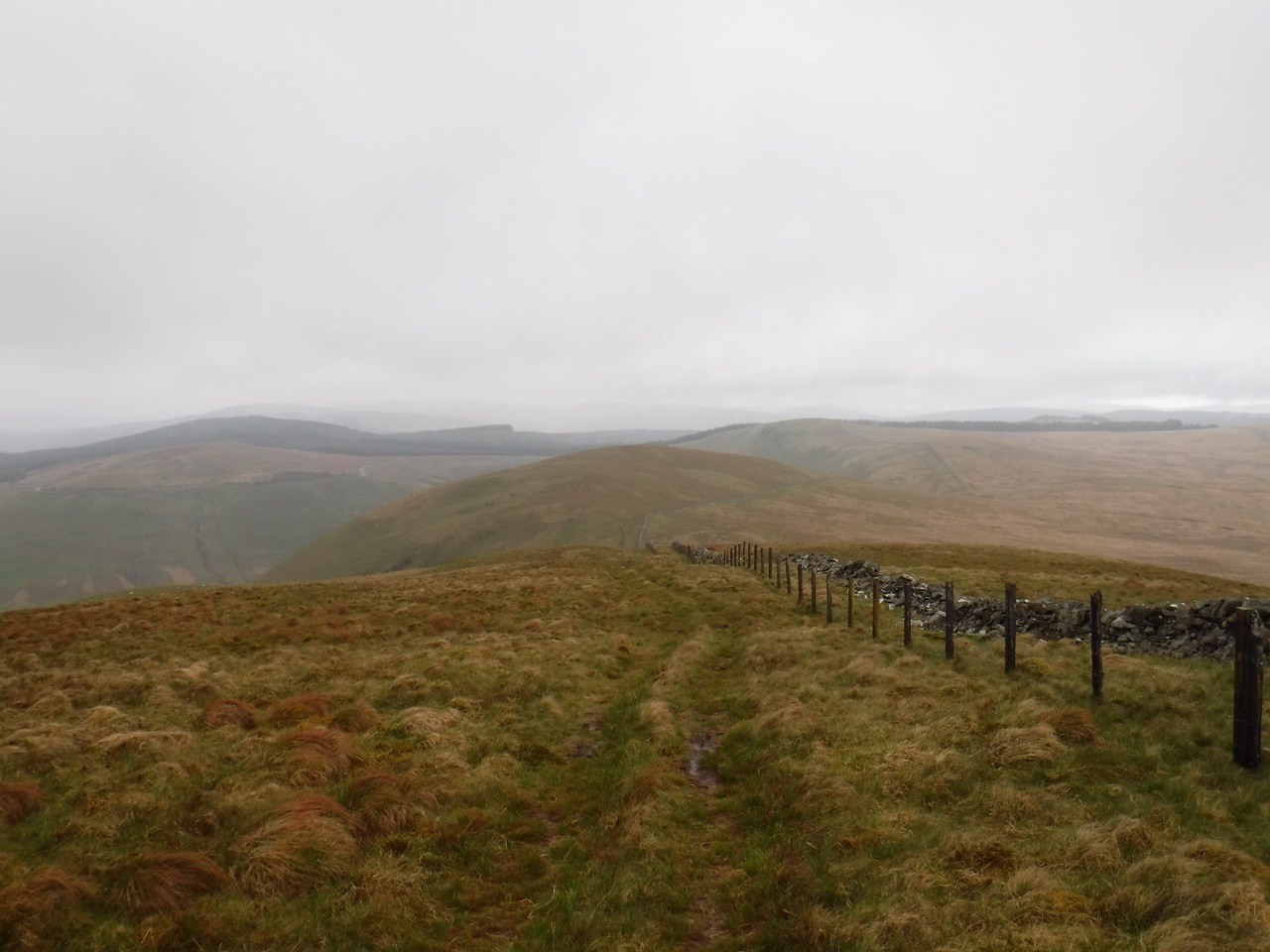 After Annandale Hill we had a small climb over the northern slopes of Great Hill and then another over Chalk Rig Edge, which is the highest point of the walk at 500m. I had a slight navigational miscalculation and forgot the number of climbs before we would reach the cairn. Because of this I told Audrey that our climbs were all done once we had crossed Great Hill. I was expecting to see the cairn marking the source of the Annan, but we came down the hill and the cupboard was bare so to speak. No cairn… “this isn’t the col you’re looking for”.

So I had to explain that when I had said “it’s all downhill from here” what I had actually meant was “it’s all downhill once we’re over that hill there”. On we climbed and eventually we walked down into the valley between Chalk Rig Edge and Whitehope Heights, the cairn below us and streams draining into both the Tweed and the Annan rivers visible in the same view. Then the rain came, in such a way as to disabuse us of the view that it had “rained” earlier. The deluge was so sudden and heavy that we were totally soaked within a minute or two. I looked down at my sodden trousers and realised that donning waterproof trousers was useless.

As we approached the cairn, through the boggy ground that fed the headwaters of the Annan River, I felt my feet becoming wet, presumably from water entering the top of my boots. By the cairn, my wetness increased as capillary action carried water up from my wet thighs, to my nether regions. Eventually I was left with just a tabard shaped area of dryness on my torso.

With the rain there was flowing water beside the cairn, which I would have to regard as the source of the Annan river, so I stood in it. When I was last here the cairn had an inscribed stone which wasn’t legible now. I don’t know if this was due to my rain covered glasses or because the inscription is fading beneath the lichen.

The weather wasn’t exactly conducive to hanging about, so we headed off down the valley. This is part of the Corehead native woodlands project and the hillsides were covered with newly planted saplings. Apparently 230,000 oak, ash, aspen, juniper, rowan, alder, willow, birch and cherry saplings have been planted here. Alder seemed to predominate in the valley, and I presume that the unusual evergreen saplings are juniper. Despite having a waterproof camera for this outing, photos were still limited by raindrops on the lens. 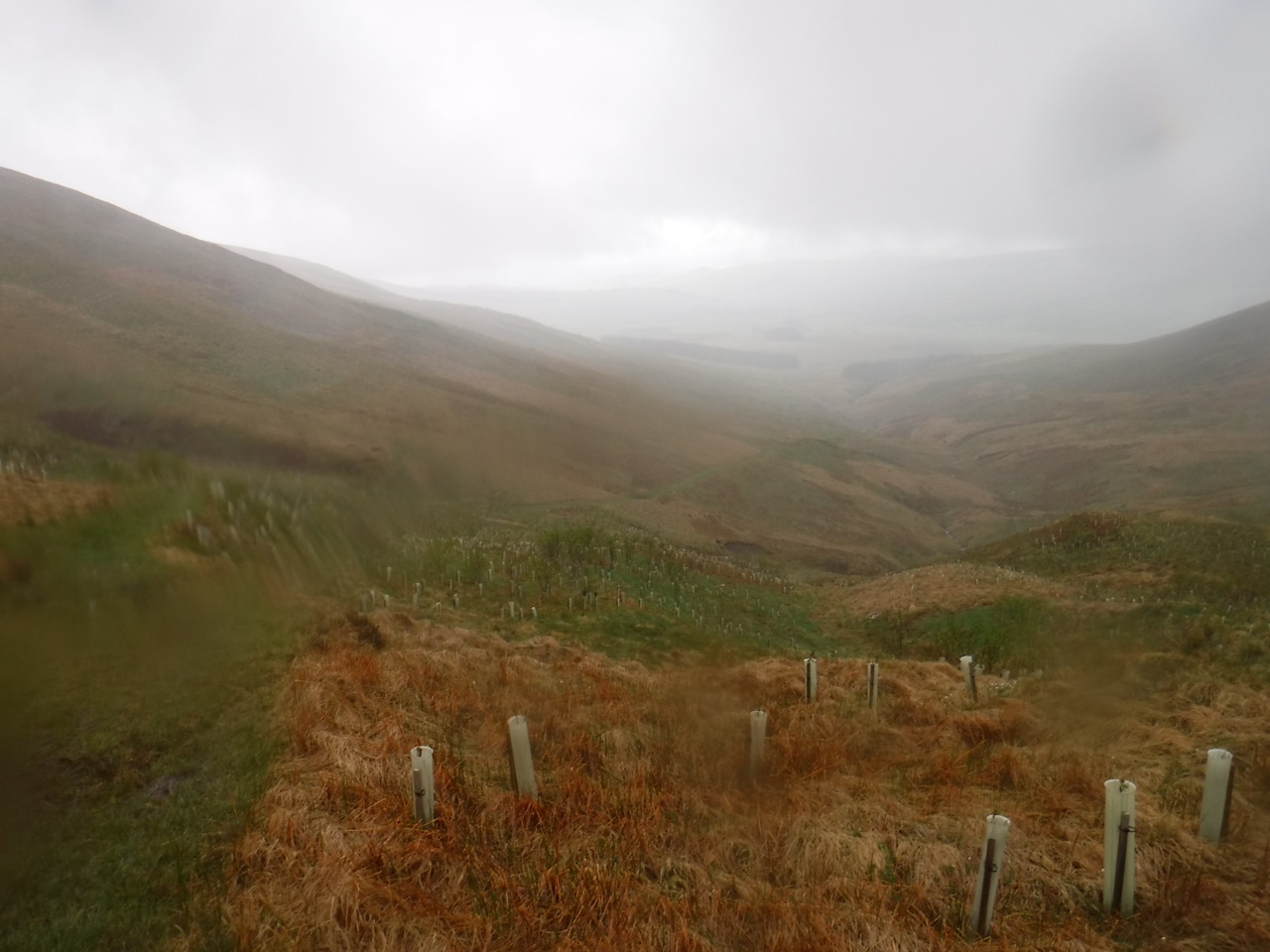 Saplings in the Tweedhope valley

One of the new Sikorsky S-92 search and rescue helicopters flew overhead, the first I’ve seen since bristols took over the SAR from the RN. Hopefully it was on a training exercise. 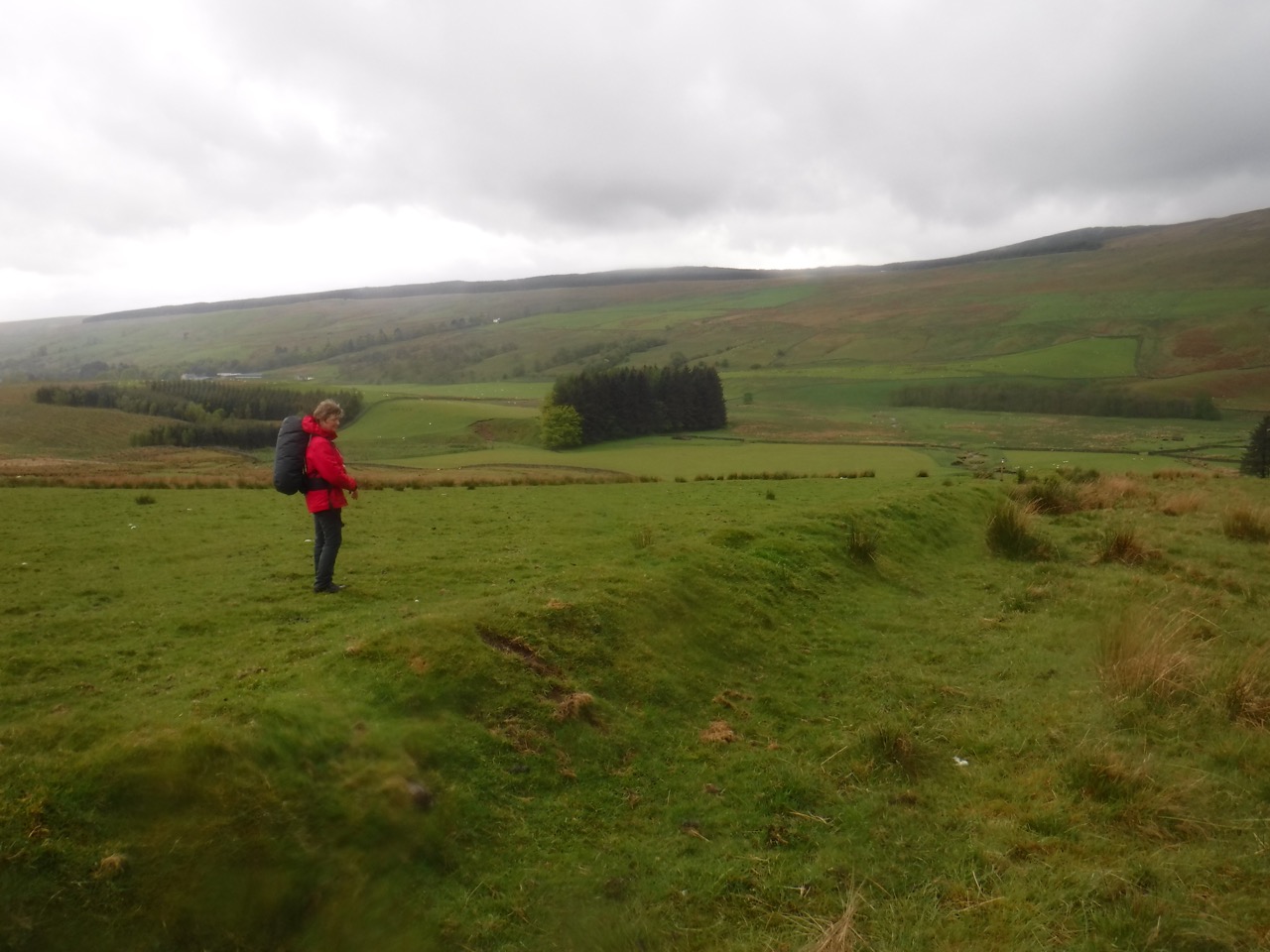 On the path, with no nearby junctions, or indeed any alternative ways one might walk, we came upon one of those why-did-they-put-that-there, unnecessary Annandale Way signposts. Whereas, close by is a section which deserves better waymarking. There is a long embankment, which might be the remains of an older wall, and way waymarkers point along it then off across a nearby field without any definite track to follow, nor any obvious target such as a gate. Following the general direction of the sign, however, does lead to other way markers in the field, including one on a pair of gateposts standing alone like the remains of Ozymandias’ statue. So if you are not sure which way to go, look out for these orphan gateposts.

There is a gate, though a normal field-gate rather than one of the fancy Annandale Way metal jobs. The route then crosses a small footbridge and travels beside a wood before eventually reaching a farm track and crossing the River Annan on a vehicle bridge. An information board here titled Voice of the River reads:

Have you seen my secret start?Ten thousand years after ice I’m still making marsh up there. Five valleys open like the fingers of a hand to bring my waters tumbling down the hills, tickling silt from the rocks. I gather as one here.

There are good views from this section into the Beeftub itself, and pleasantly contrasting variations of green in the trees. 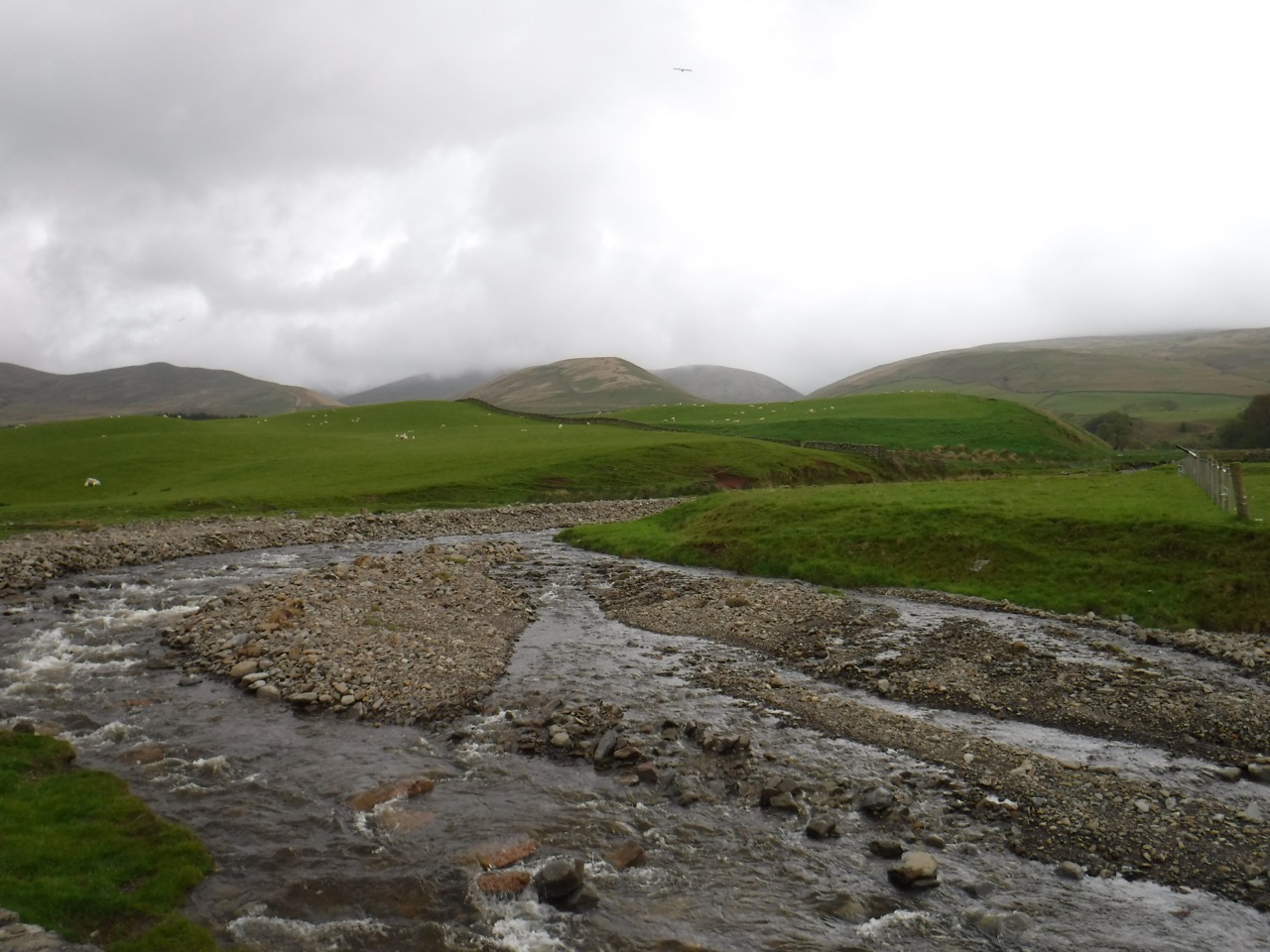 Auchencat Burn, close to where it joins the River Annan

The farm track took us through the farmyard of Ericstane and then onto the minor road which we followed back to the junction where we had left the road heading for Meikleholmside. We stopped for a late lunch sitting on the steps of the community hall beside the Auchencat Burn.

We were now back amongst the wildflowers of the hedgerows, and a variety of trees, the bird cherry blossom was at its best so its many trees stood out. Bluebells were past there best in the woods but still putting on a good show on banks here and there. It was the wild garlic though that was having its day. Following the rain there was a heavy scent of garlic where the damsons were flowering. 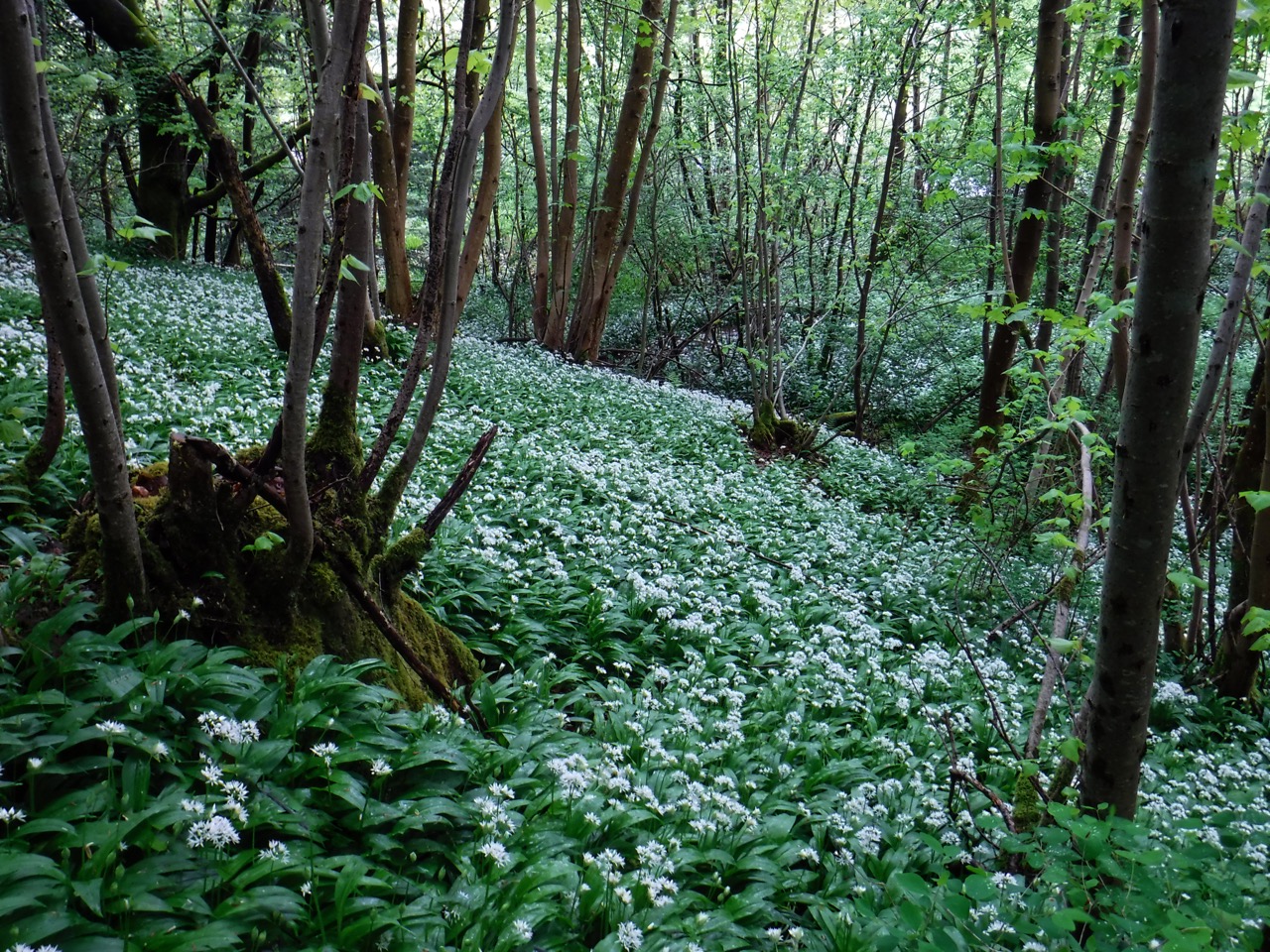 As we walked on, we crossed several burns giving us the impression of winding across the River Annan, whereas in fact we were crossing its tributaries. A swallow swooped by giving me an opportunity to remind Audrey that “one swallow does not a summer make”, just before the next one flew by. We then wondered if it had been the same one and looked about to see if we could see the two at the same time. At that point four flew by.

Having been completely soaked through on the hill, the wind on the return leg of the walk managed to dry out my trousers though I may have looked slightly unusual walking along with my pockets turned inside out.