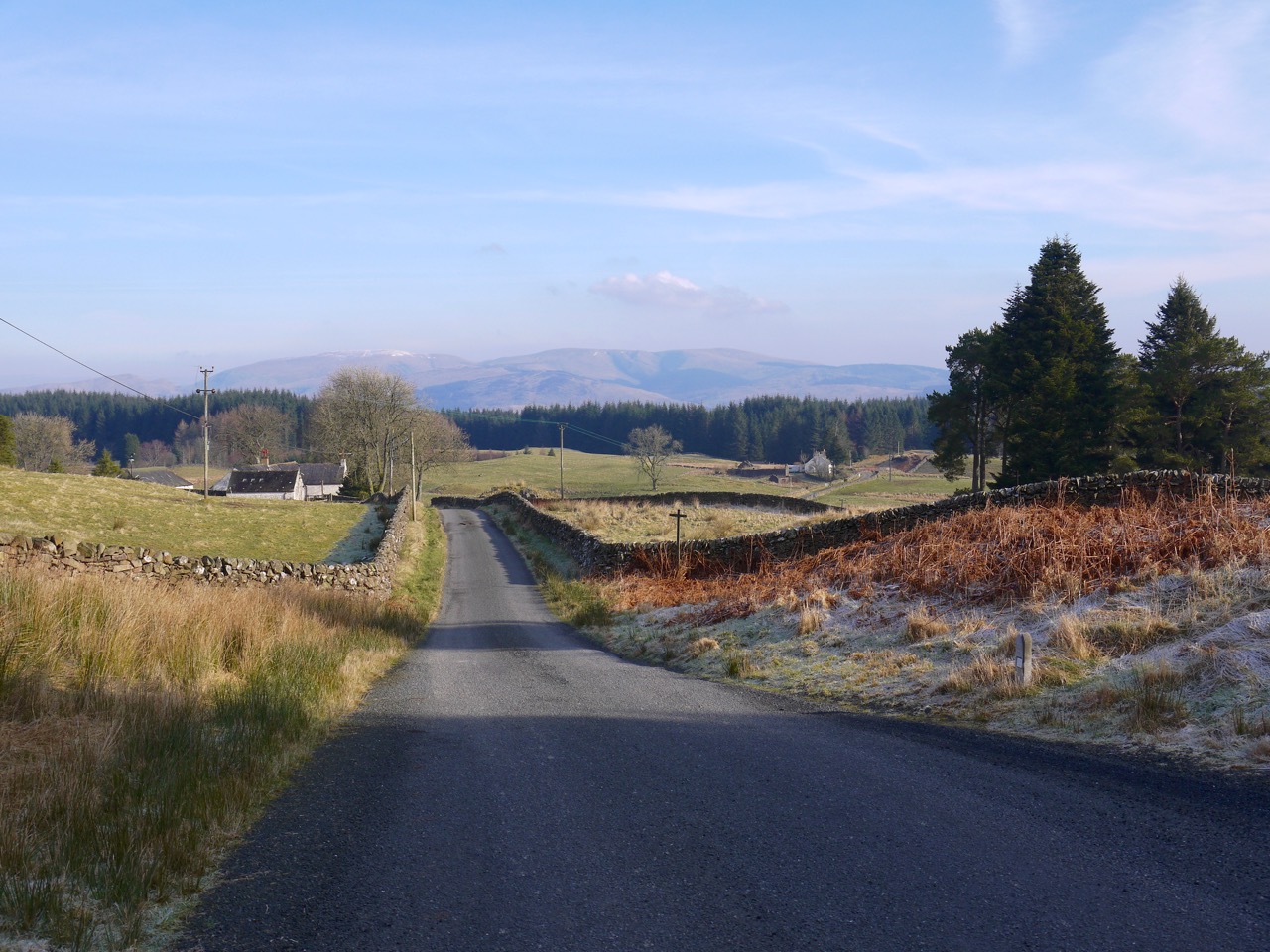 The second leg of our Romans and Reivers walk. Earshaig to Bellshaw

We took up the walk again where we finished the last section, where the forestry track carrying cycleway 10 crosses the Earshaig-Kinnelhead road.  Looking west along the road gave us a view of Queensberry that had been denied to us the previous week by low cloud. This is the road described in “Routes from Carlisle”:

The tapering hill of Queensberry…commands a wide view…The route is by a side road from Beattock Bridge to Earshaig and Kinnelhead, where cross the stream, turn left, and pass in front of a cottage. The mountain shortly comes into full view, and further directions are unnecessary.

I don’t know when this was written but the document gives the price for room and board at the the Buccleuch Arms in Moffat as 8s 6d (that’s 42.5 pence for the young ones). The route description for climbing the hill strikes me as shorter than one might expect in modern writings.

We started by turning our backs to the tapering hill and set off eastwards through the Forestry conifers, their greens made pale with frost contrasting with the golden leaves of small beeches. The picture above is the view looking east along the Crooked Road as we emerged from the trees, with Wester Earshaig and Easter Earshaig in the middle distance and the Moffat hills, with a snow capped Hart Fell, in the distance. It also shows the conditions, with blue sky and frost on the ground even where the sun was shining. It was cold but with hardly any wind so we didn’t need our coats.

You might notice a cross-like sign, just before the right hand dyke reaches the road. I hadn’t given it much attention as we walked past, presuming that whatever sign it once held had fallen off. I do wonder though if it might have been a Covenanter’s Trail marker. It certainly looks like one even if it no longer has a visible “CT” on it. These markers are found dotted about D&G, but I have not been able to find any lists of them, nor any record of any specific Covenanting event in Earshaig. 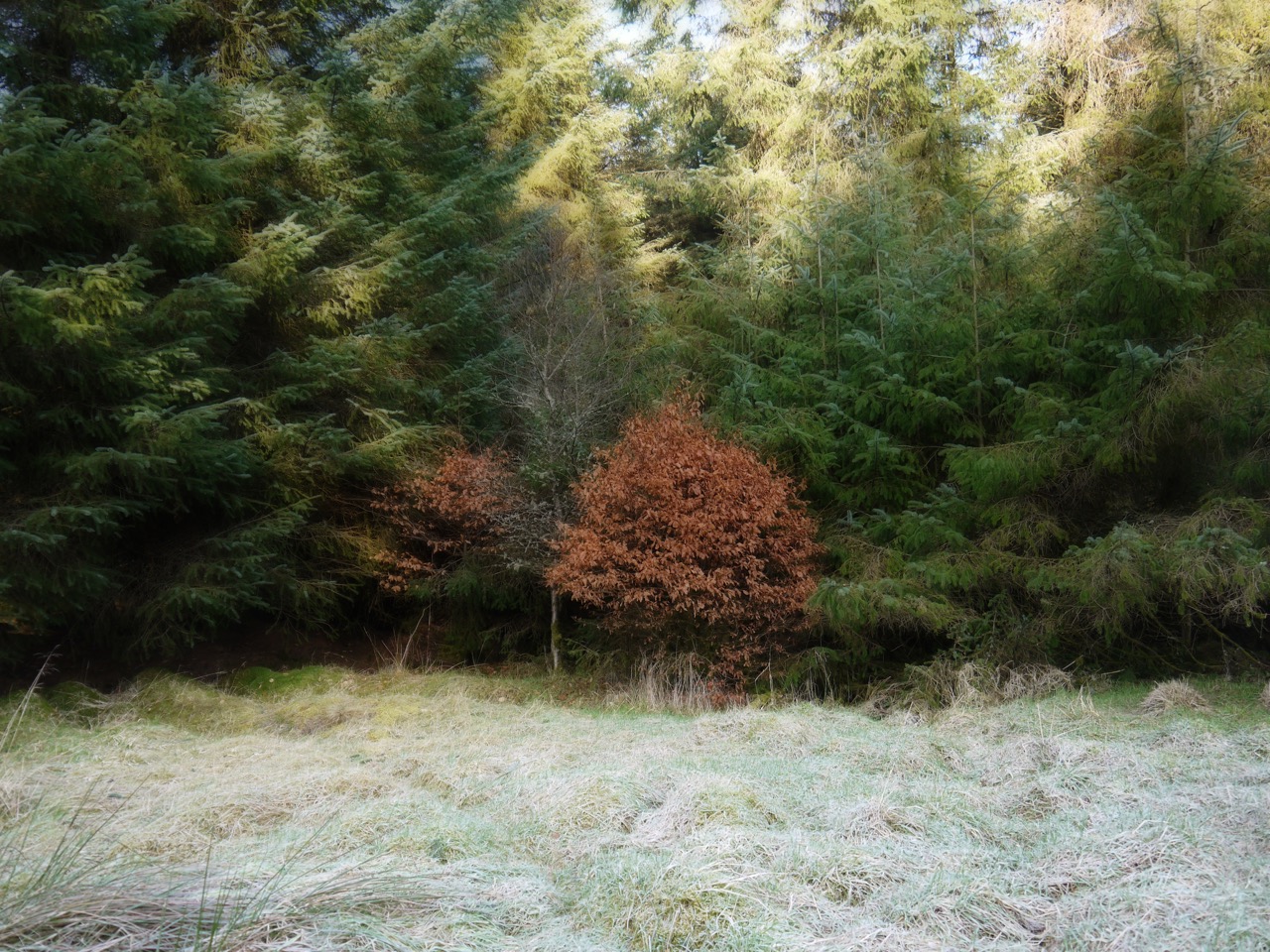 The open ground of Earshaig gave us views of Queensberry again, and the Harestanes wind turbines below it. We could see where we had walked from Harestanes Heights last year, with a very young Eddie. (No directions necessary).

This being a single track road, there are wider areas marked by “Passing Place” signs. Further along the Crooked Road, some of these signs have obviously been used for target practice which I can’t help but find a little unnerving. Seeing these signs set me thinking that future archeologists might interpret these as the places we visited to die. For similar musings you might want to read “Motel of the Mysteries” by David Macaulay, or this brief description of the work. 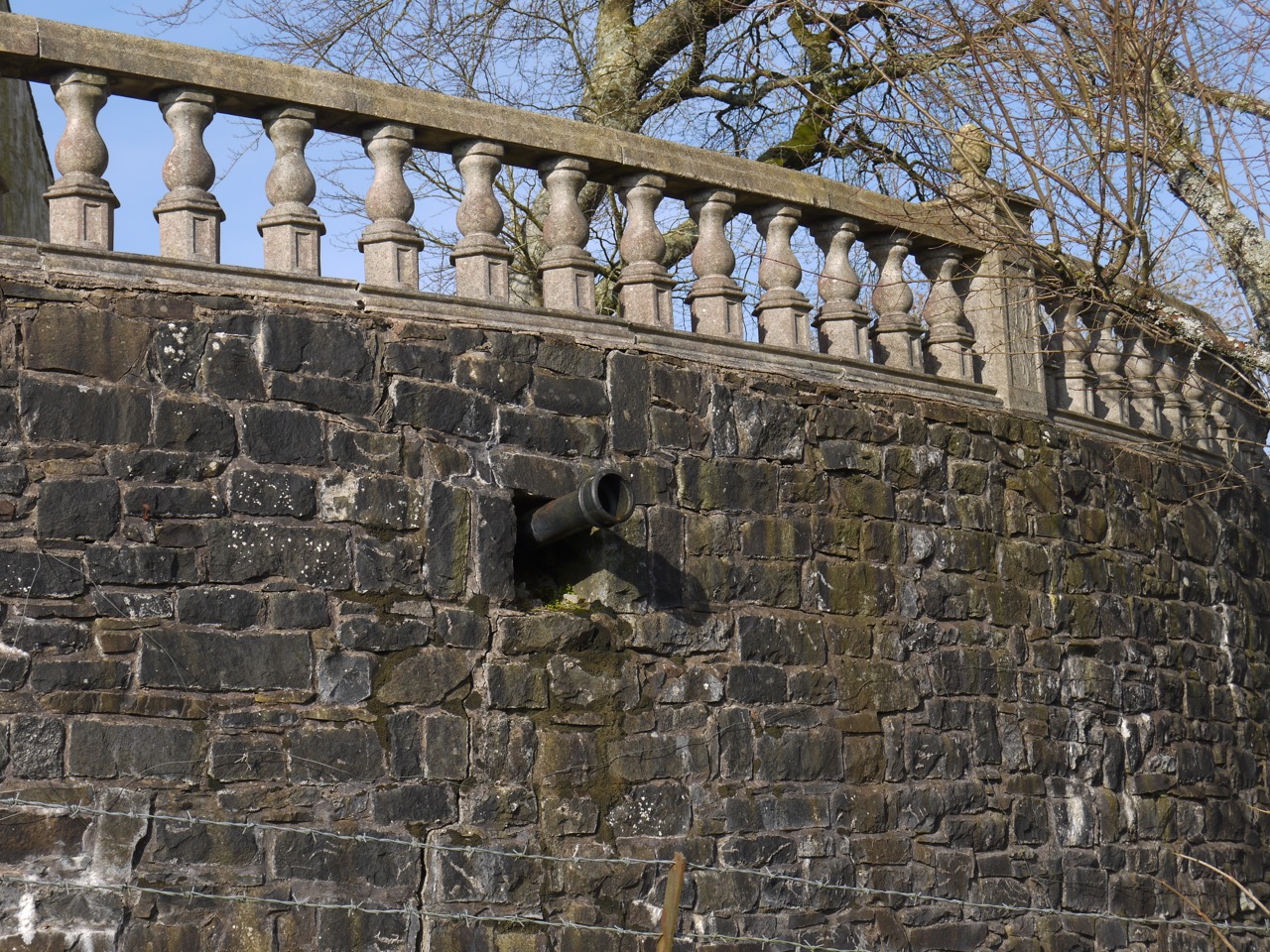 Just as I finished my ludicrous thoughts about passing places I looked to my left and saw cannons sticking out of a the wall there. Wester Earshaigs looks like a cottage from the west, but its eastern side seems to be masquerading as a small castle, its drainage pipes serving as cannons. Either that or they are real cannons and are the cause of the nearby steading’s poor state of health. You could almost believe that Wester and Easter Earshaig have fought over Middle Earshaig for long years and their activities have left it in this ruinous state. 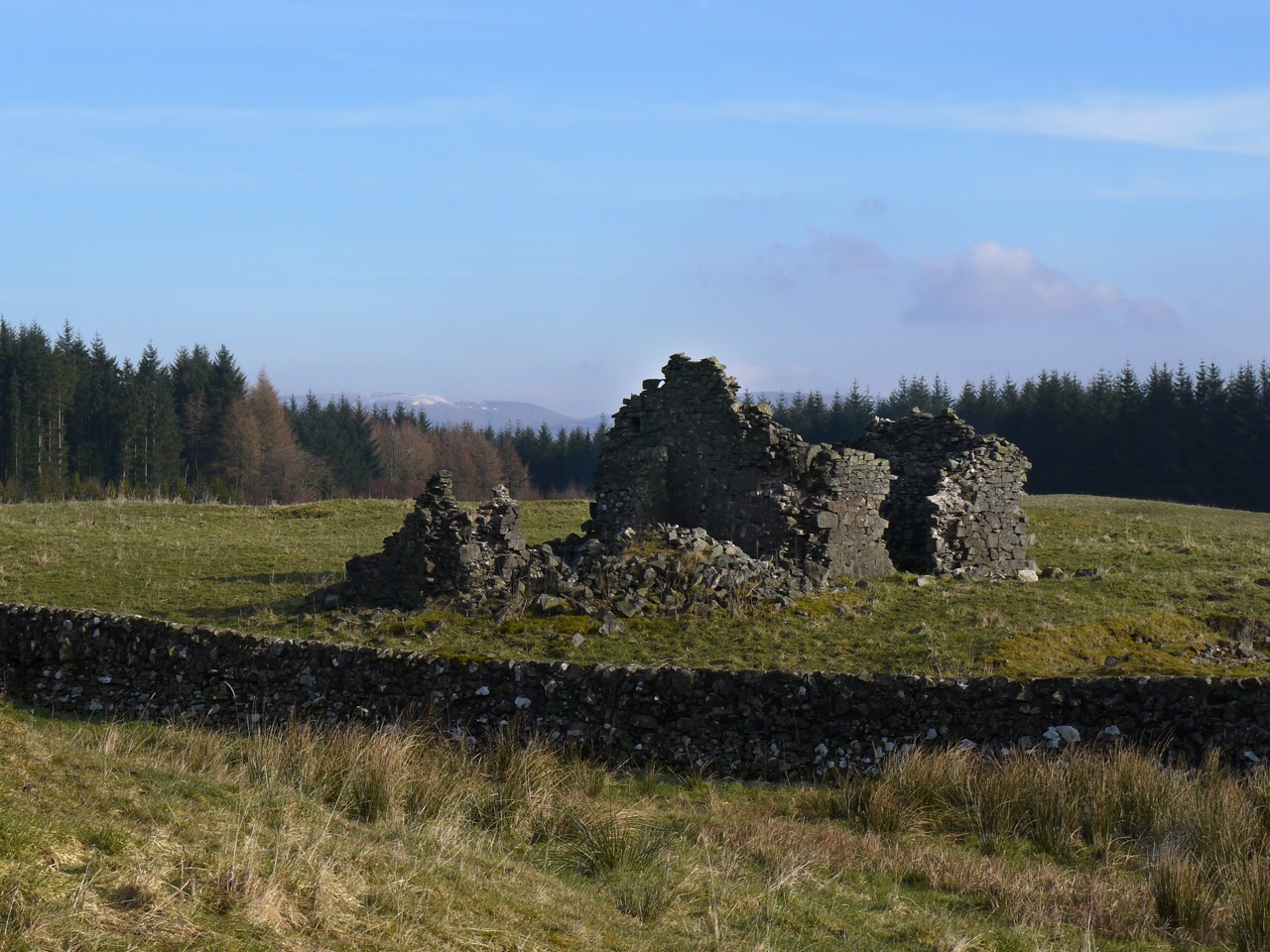 Ruins near Earshaig, Hart Fell in the distance

Since we had a relatively easy walk ahead of us we allowed ourselves a couple of diversions from the R&R and the first of these was  to the Earshaig Lochans, which we had last visited when walking the SUW a couple of years earlier. There was also the question of whether we had missed out 100m of “official SUW” by walking to the west of these lochans back then. Well, we have walked that 100m now.

These two lochans sit within a small nature reserve, with a waymarked walkway and several picnic benches. Another case of us only finding picnic benches on walks too soon or too late for lunch. Both of the lochans are man-made, or at least enlarged by damming, and today they were both frozen reflecting the temperature. 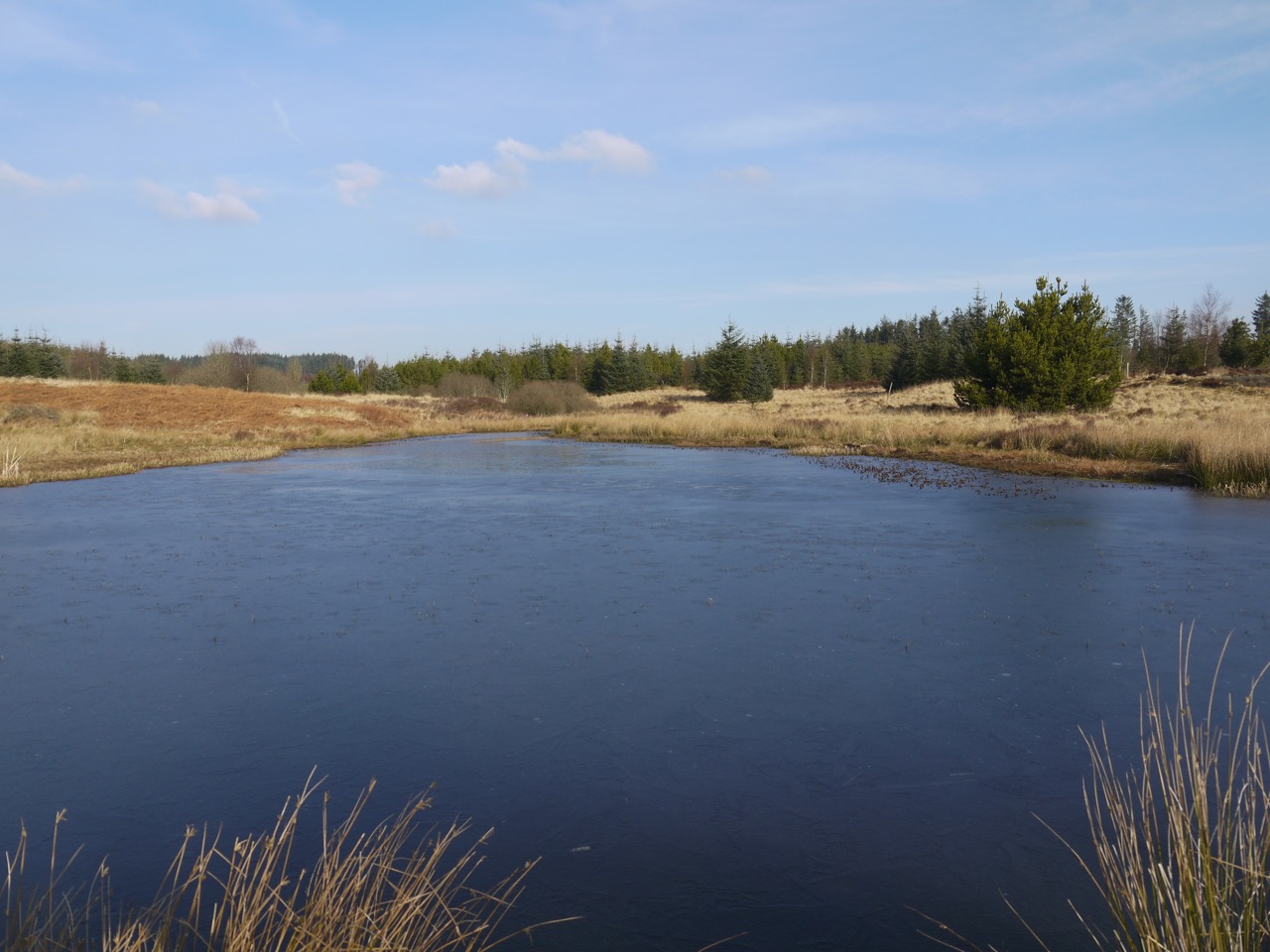 At the last visit I had walked past the crocodile sized carving of a common newt without noticing it, so this time I was alert and spotted it without having it pointed out to me. It was carved, I believe, by Pete Bowsher, a local champion chainsaw carver, who is also responsible for the carved benches in Ae forest, and the Dragonfly by the other lochan. 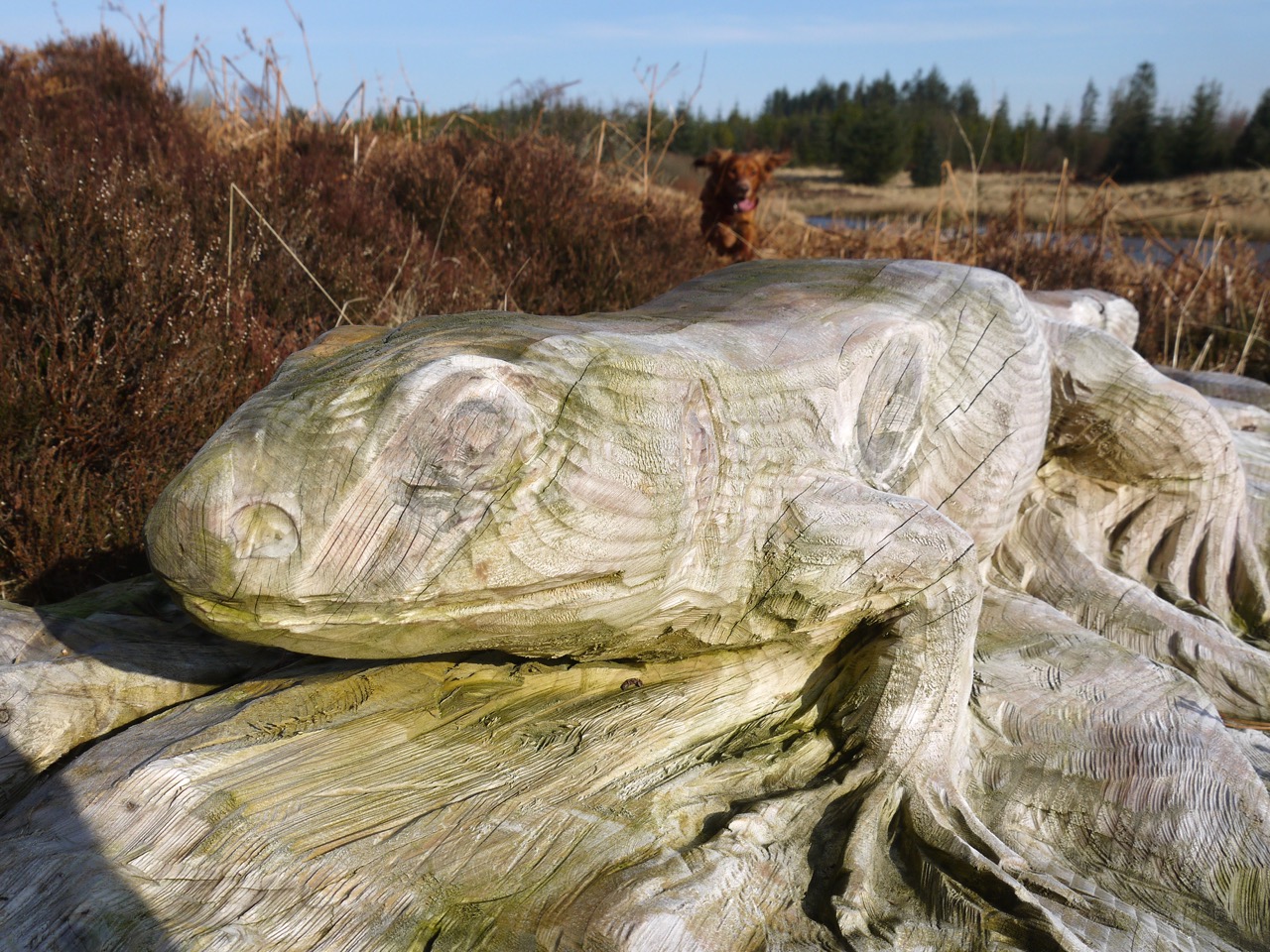 The carving was a light reddish brown colour in 2014 and had blended in much more with the surrounding winter heather and bracken . Weathering has left it paler and more easily spotted.

Dragonfly at the other Earshaig lochan

Back on the road, we entered forest again, at a Romans and Reivers stele marked as 2.5 miles from Beattock and 12.5 miles from Ae. An overhead cable ran beside the the track and since there were several fallen trees in the forest and I thought it lucky that it had escaped being brought down. Not long after that thought, the cable dipped and we saw that trees had in fact brought it down. 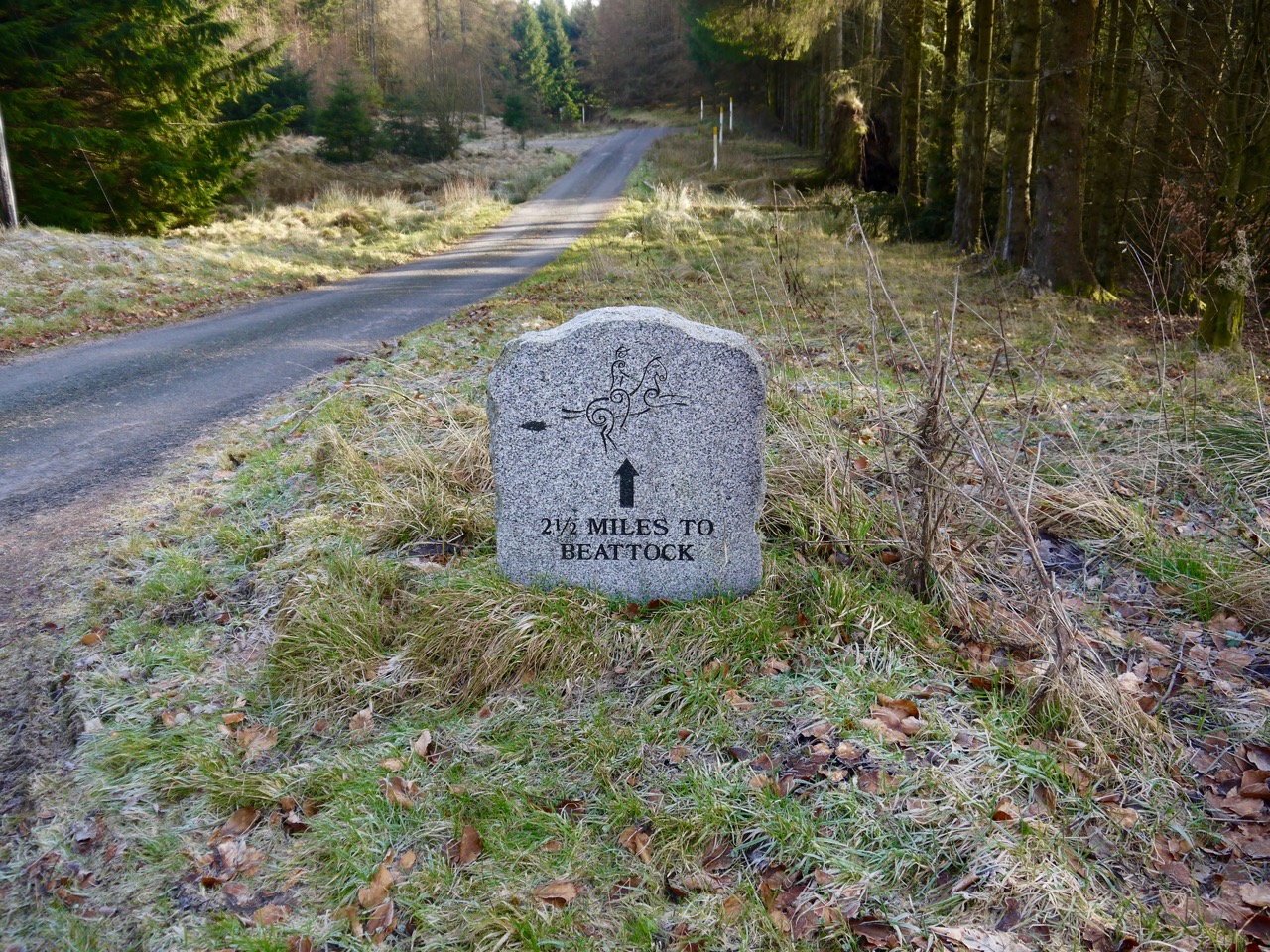 As we left the forest we passed the sandstone memorial to Ben Wilson of Holmshaw, who died on 11th August 1897 having been struck by lightning. The lettering is gradually fading, and it will be sad for it to erode completely. Perhaps though, the choice of sandstone suggests it was not meant to last forever. 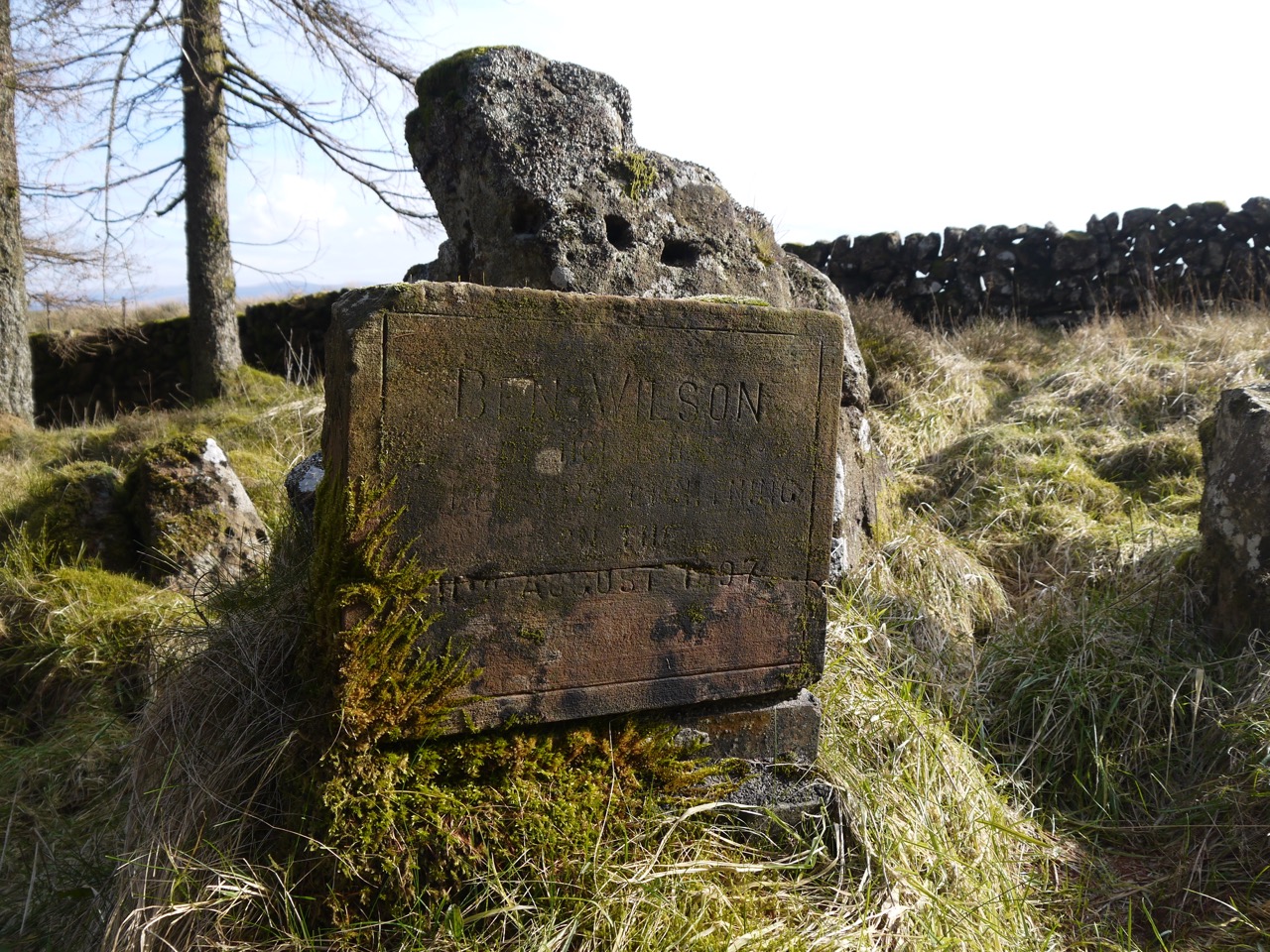 Here the dogs had to be put on their leads to negotiate the cattle grid. Passing this brought us into the open ground of Witch’s Wate where travellers would pause to find a rowan branch and tie two red threads to it for protection against witches before continuing on their way.

Unfortunately I had forgotten to bring any red threads so it seemed a waste of time looking around for a rowan branch. We kept our eyes peeled for pointy hats, broomsticks or black cats. Luckily there where no witches to worry us. In fact, we met a nice old lady with her pet crow. She offered me a lovely shiny apple, but I wasn’t really hungry so I let her keep it. She seemed a bit put out when I took this photo of her. Witches! who would believe in them? 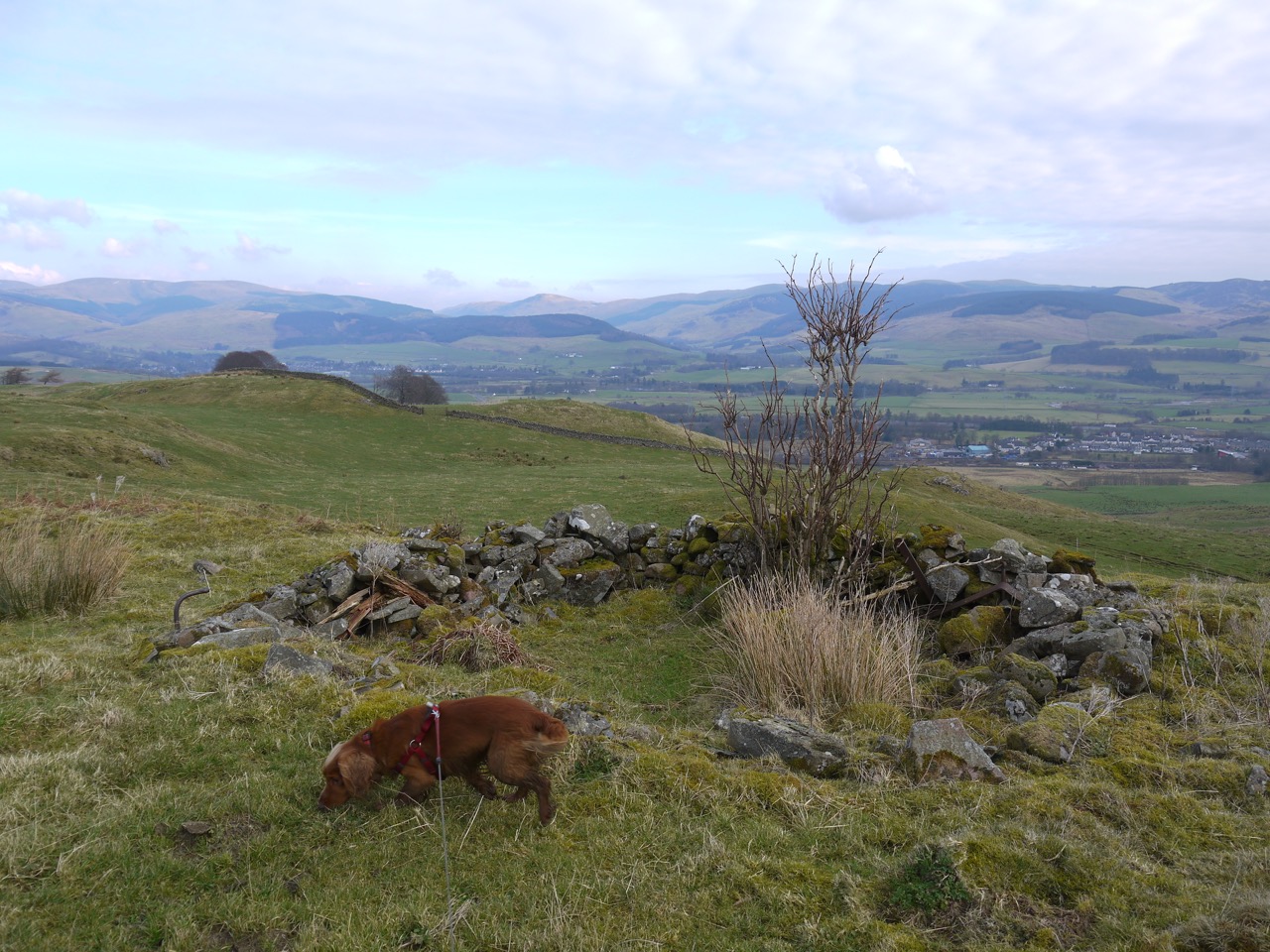 I intended to walk up to the remains of Beattock fort, so we left the Crooked road heading for a knoll with a pillar atop it. Unfortunately we met a fence topped with barbed-wire and had to retrace our steps to the road to find another way up which didn’t involve crossing barbed wire. Our second attempt met with the same barrier but it was third time lucky.

It is often difficult to make out the remains of these hilltop forts except on aerial photographs but the remains of ramparts here were still recognisable as tiers. There is a small round enclosure of stones at the top which would be ideal for a picnic in warmer weather. It certainly offers extensive views across Moffat, and both the Moffat and Ettrick hills. I had read that Burnswark Fort could be seen from there, but I couldn’t see it. 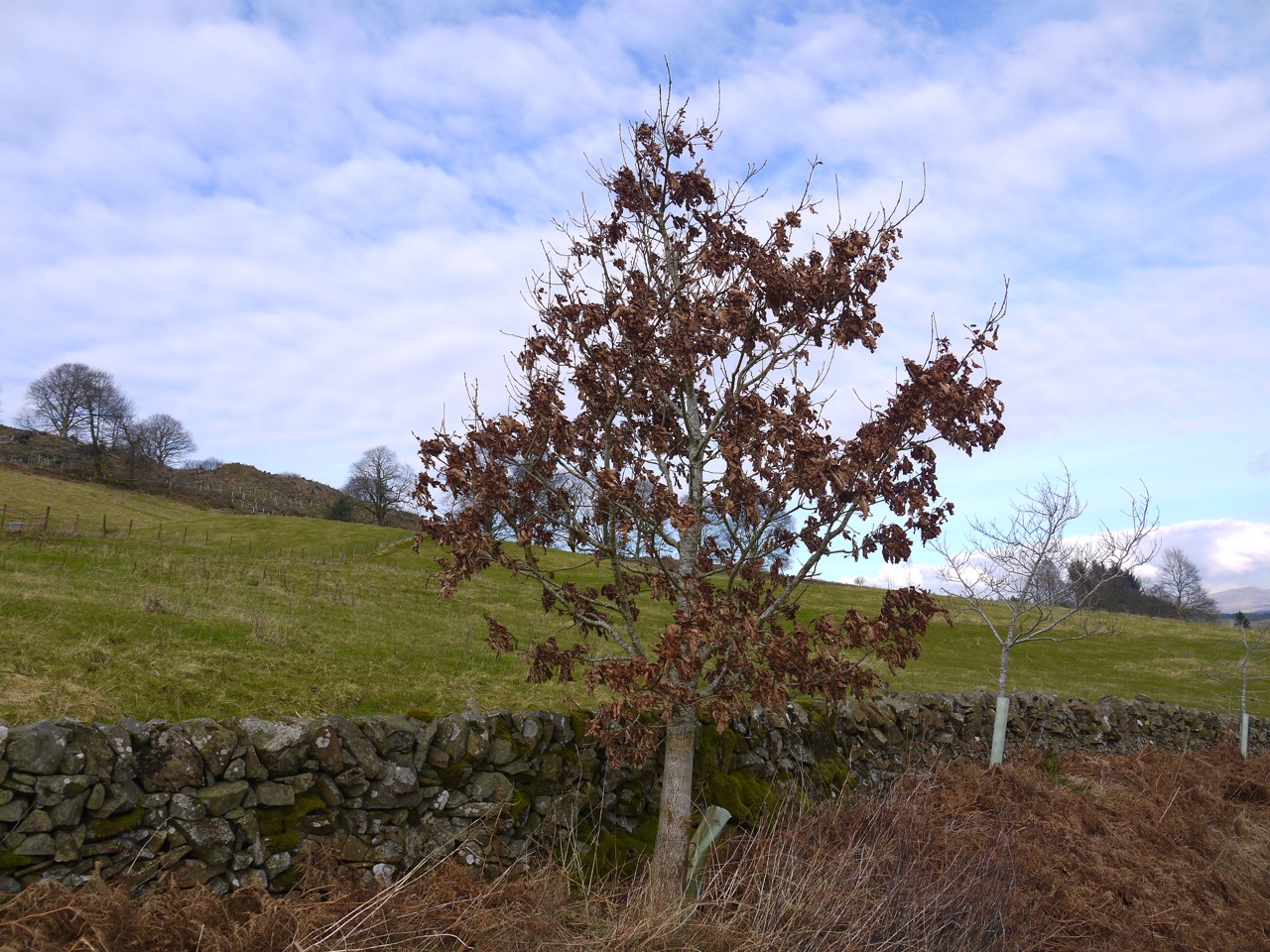 Beech on the Crooked Road

We had a couple more cattle grids to bypass and then headed down the steeper section of the Crooked Road down to the bridge at the railway. This single carriageway bridge is guarded by traffic lights, which turned green as we approached then reverted to red just as we got there. Happily, since we were pedestrians, and there was a pavement, we could ignore the red light.

I had a taste of some haws and hips from the trees by the road, but can’t say that either were particularly appetising. I should have accepted that apple. 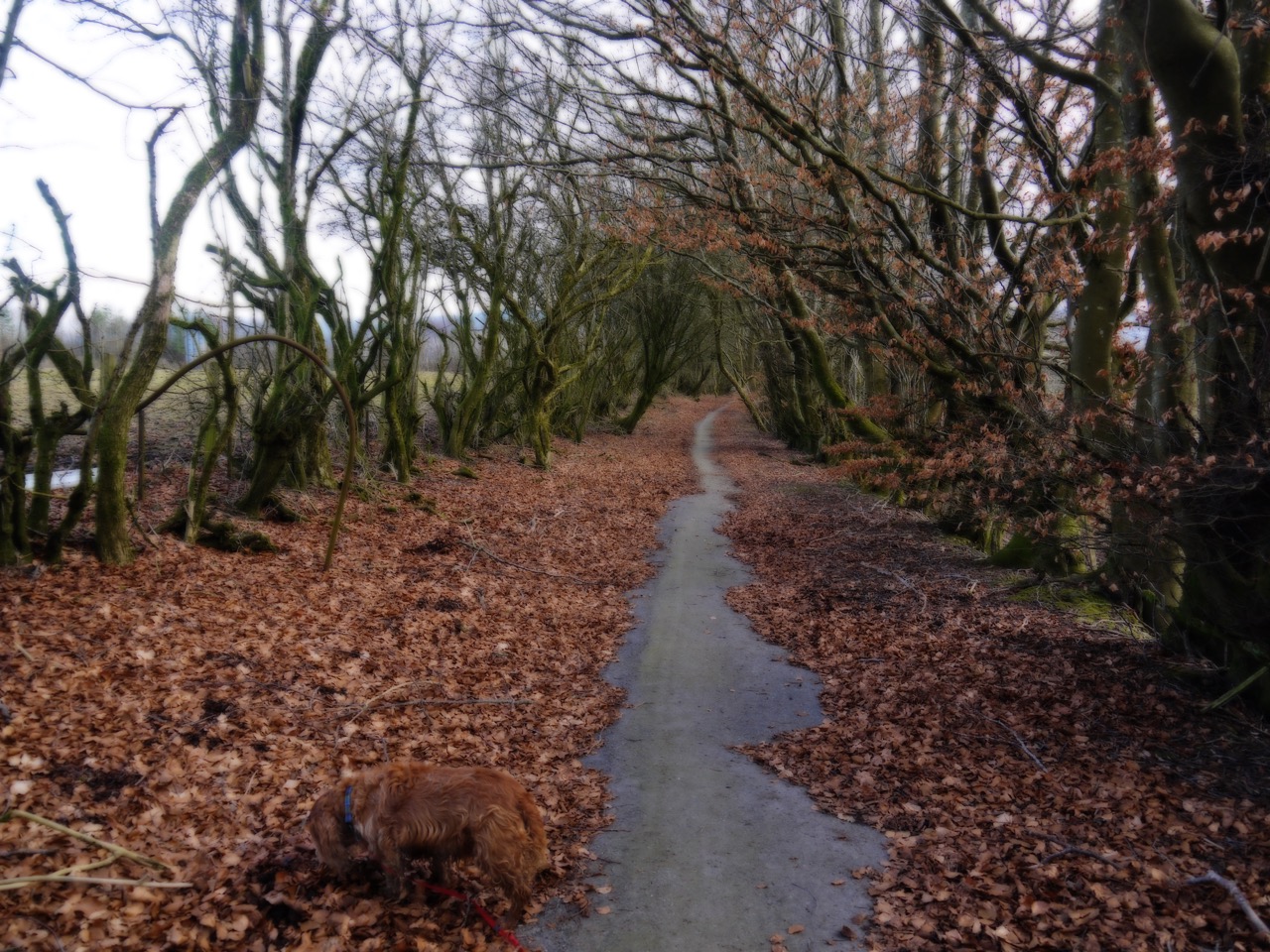 Having crossed Evan Water, by the bridge built to Telford’s design, we headed over the road and along a short avenue of Beech trees. The fields either side had horses, and a long haired pony stood by the fence watching us. At the end of this avenue the footpath turns briefly right before passing under the A701 and M74 beside Evan Water.

A sign here said the footpath was closed, but there was no posted alternate route. This would have meant a detour along the main road so we decided to continue along and see if we could use the path. We kept the dogs on their leads in case there was a problem but as far as we could see, there was no reason for it to be closed. 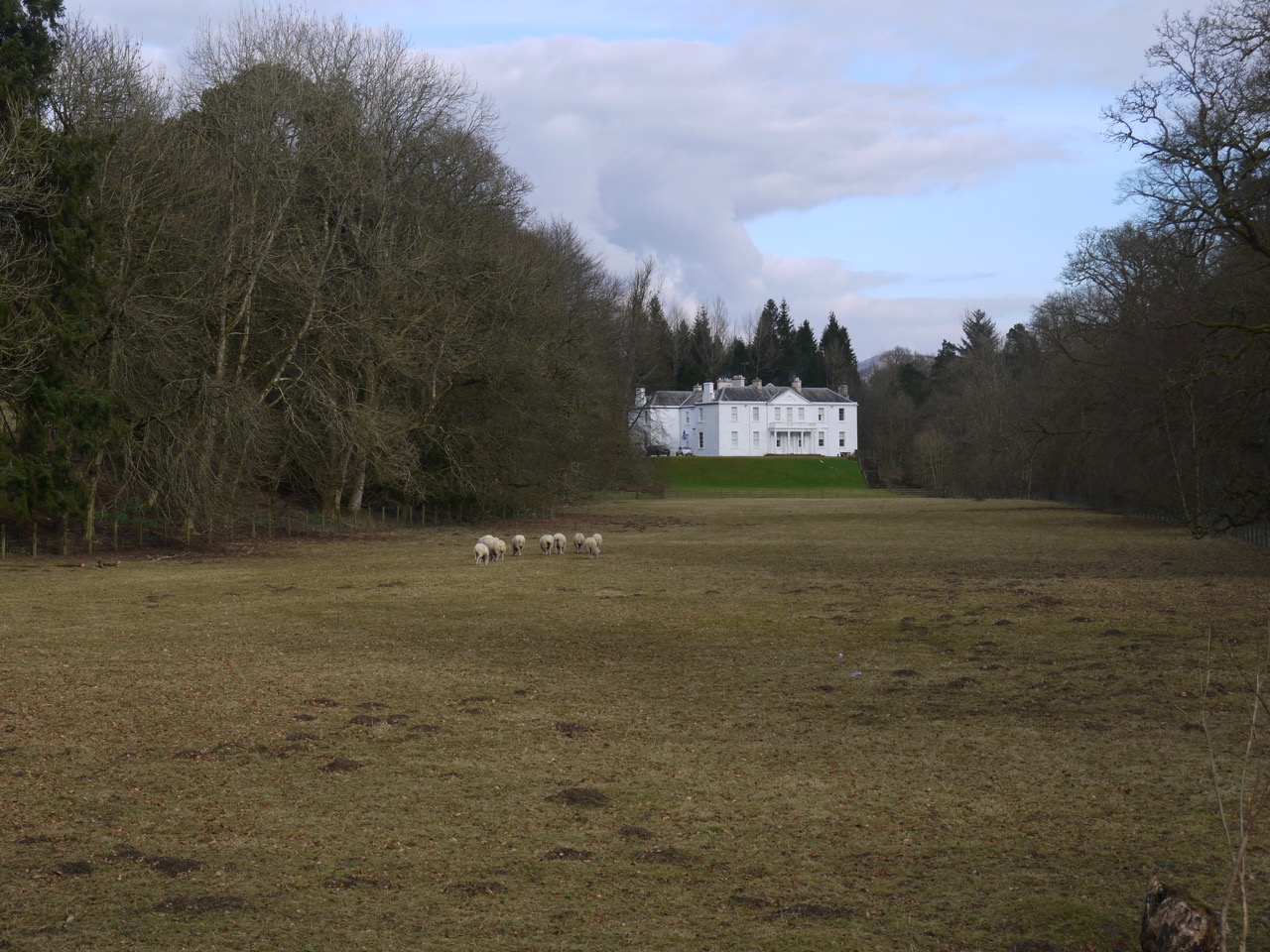 Most of the remaining walk was on minor roads. There were banks of snowdrops to see and many trees just beginning to bud, giving a tints to their bare branches, the larches yellow, and the birches brown-red.

Since the Crooked Road, the R&R, SUW and Annandale way had shared the route, but the latter left us before Barnhill where the Roman Road heads north to Moffat, not that one would easily recognise it as a road. We parted company with the SUW, albeit briefly, after crossing the River Annan, at Oakrigg. The R&R follows the road where the SUW climbs over the minor hill. We had walked over Oakrigg on a previous walk so it was not a great problem sticking with the minor road. 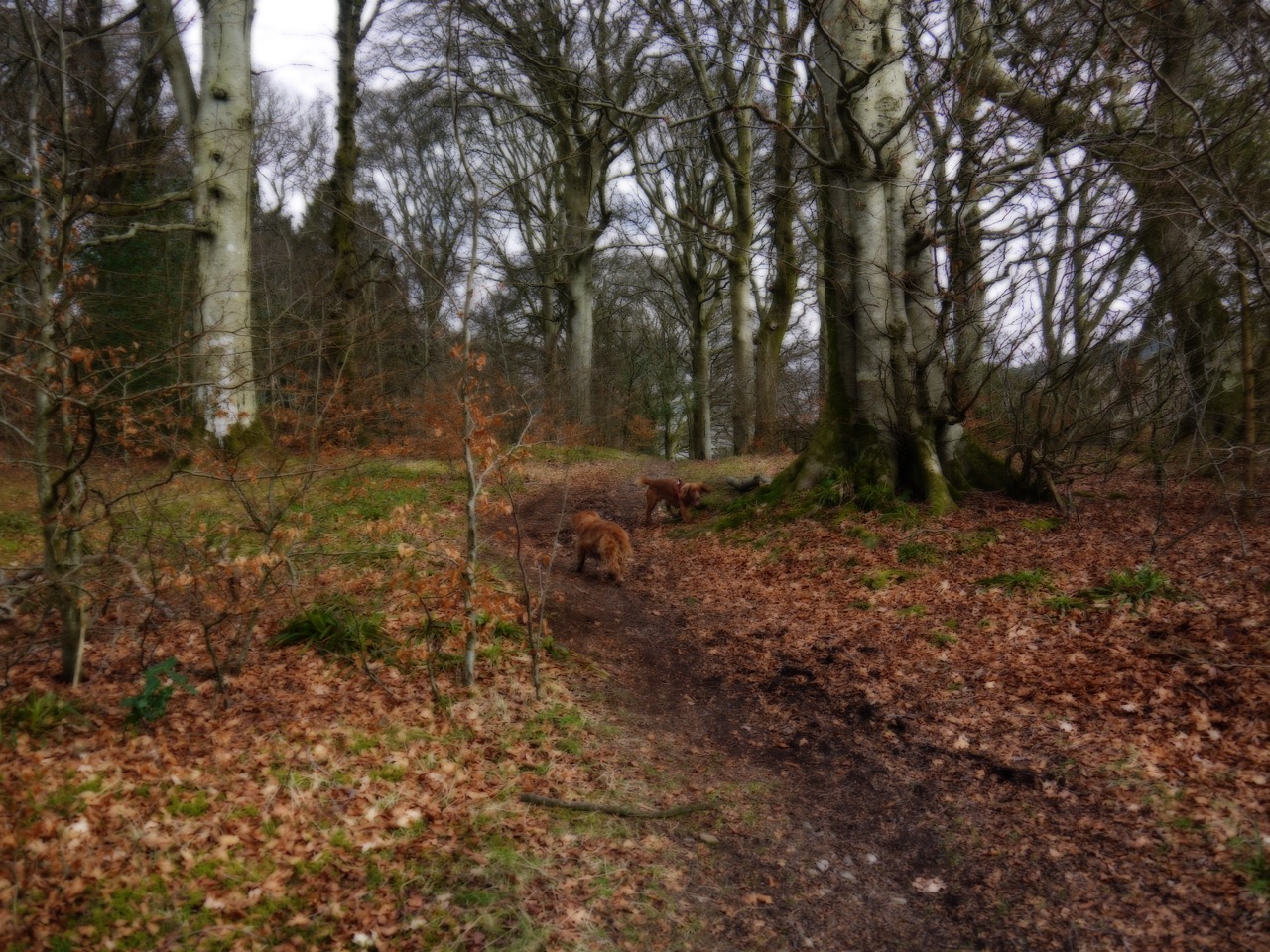 At Dumcrieff Wood the R&R stays with the road, but we didn’t want to miss a little woodland walking, and since the road was only 20m away, were happy to consider the R&R done, so to speak. As it was we were to walk the road anyway.

Eddie managed to run out of his harness while exploring the undergrowth and needed to be re-dressed. And then, Sweep, who can’t jump into the car and needed help getting up a one step stile to get into the wood, decided to jump over a wall and run away. By the time I’d climbed the wall, onto a minor road, he was nowhere to be seen either way. I was blowing a whistle so he would know which way to come back when I heard some other walkers telling Audrey that there was a dog up ahead. So he had climbed back over the wall, as did I.

On we went, the dogs now finding mud to jump in having remained relatively clean up until then. When we left the woods and started walking along by Moffat Water I was thinking ahead about putting the dogs back on leads for the final on-road section, when I realised that I didn’t have a lead in my hand.

I must have put it down while putting Eddie’s harness back on and forgotten to pick it up, perhaps distracted by Sweep’s jaunt. We needed it for the last half mile so back we went in search of the lead. 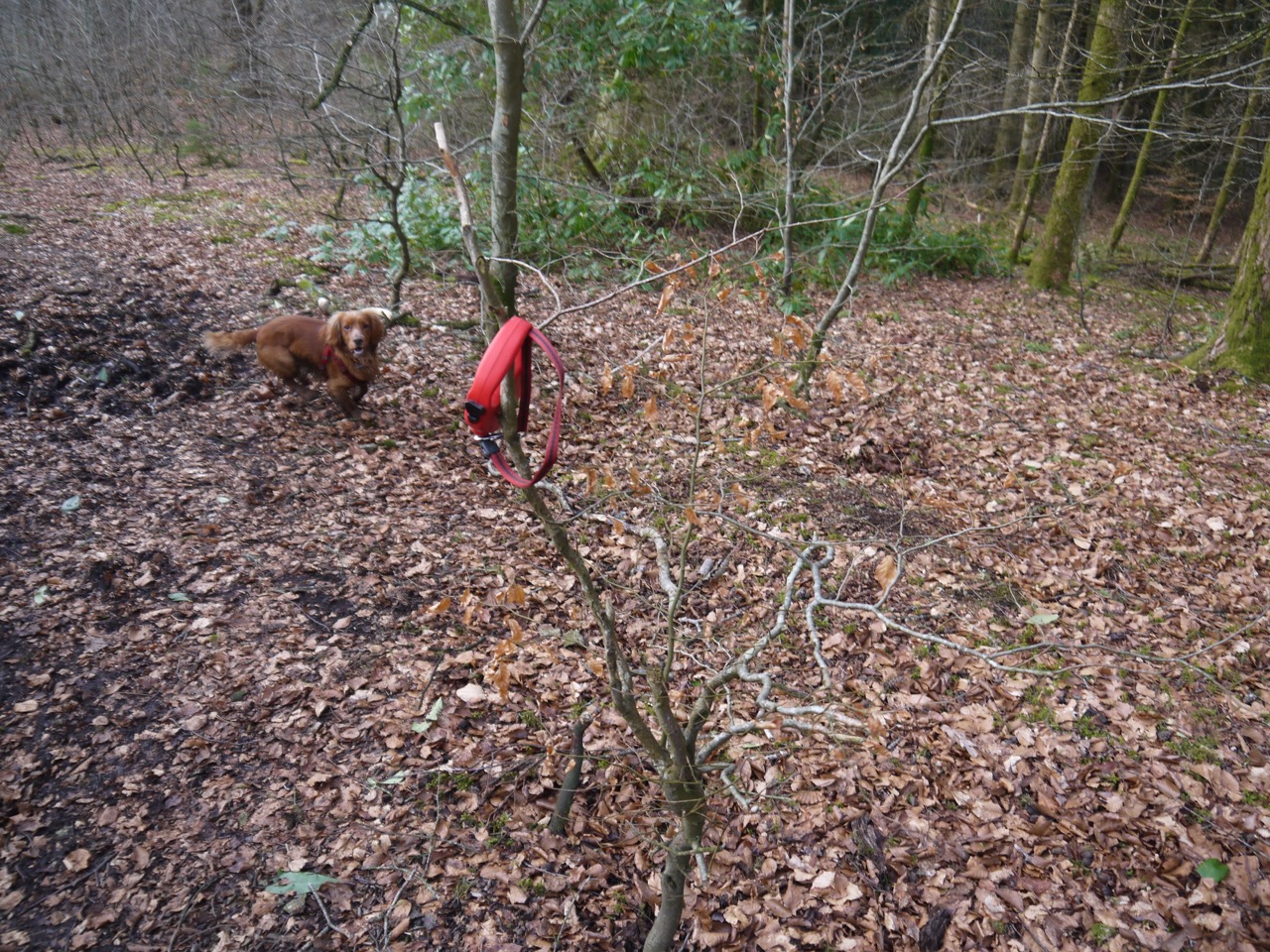 We found the lead hanging on a sapling, presumably put there by other walkers.

Having already walked the wood, there and back, we returned to the official R&R route of the minor road, then up to the A708 where we had left the car.

Share this...
This entry was posted in Dumfries & Galloway and tagged Annandale Way, Romans and Reivers, SUW. Bookmark the permalink.