Romans and Reivers: 1 – Rainbows and Hares 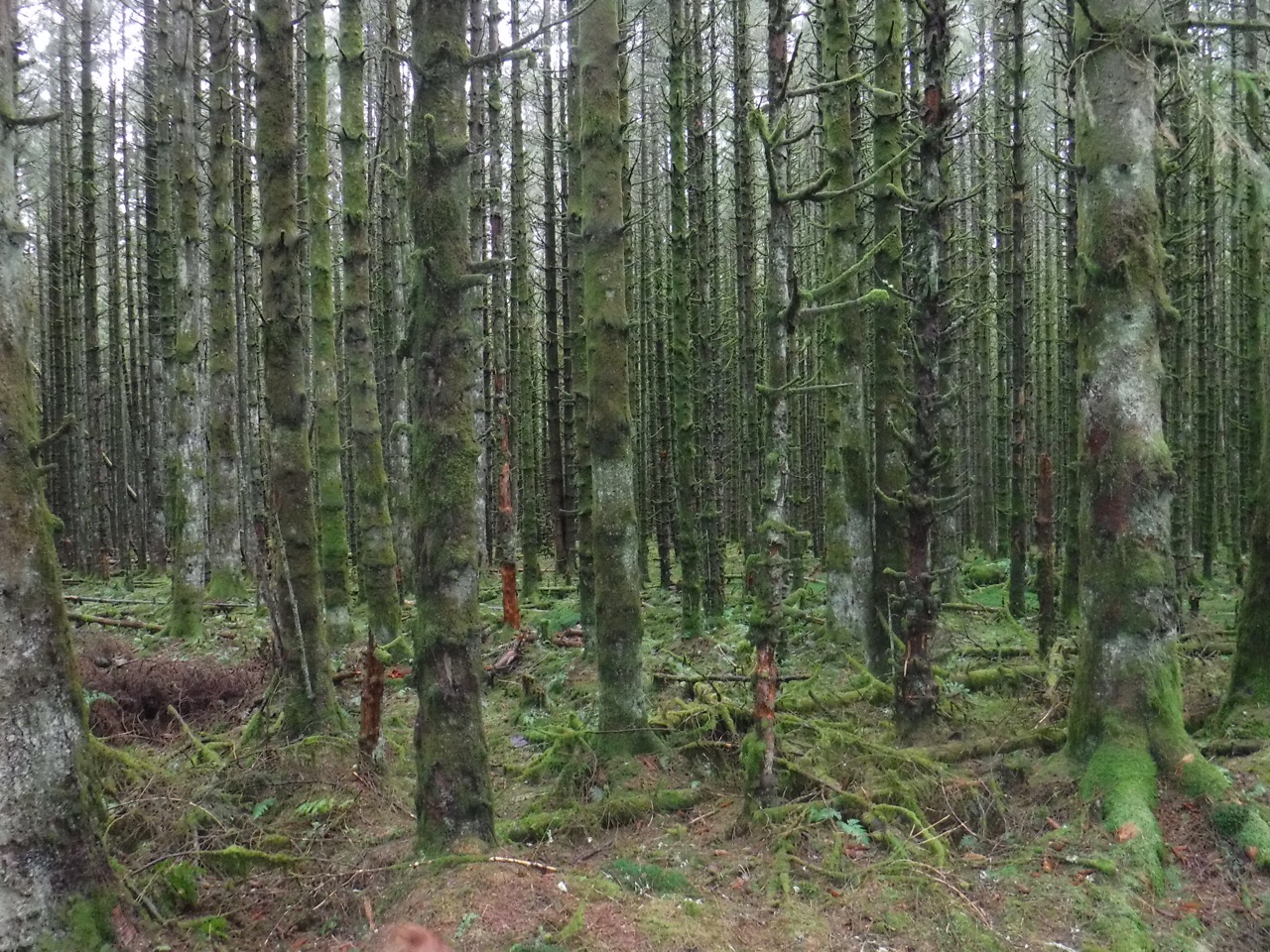 Ae to the Crooked Road

The Romans and Reivers trail is a 52 mile route following old Roman roads, forest tracks, drove roads and short sections of quiet lane through notorious Reivers country from Ae to Hawick. We have previously walked along sections of the R&R where it coincides with the SUW but this was his was our first proper R&R section. I would have worn a toga for the walk but it was too cold.

The plan was to drive a car in from the Kinnelhead Road at the north of Ae forest to the Blue Cairn, giving us an 8 mile walk, but that plan fell at the first hurdle when we found a gate barring our entrance to the forest. We were forced to leave the car there (NT041018) and have a longer walk (12.5 miles).

So we drove back to the Seven Stanes car park at Ae Forest, paid our £3, got togged up and headed off on what turned out to be the wrong track. When we got past Wood Farm and found ourselves walking away from the forest, rather than into it, we knew something was wrong and headed back. To be positive, this did allow us to warm up before the main walk, which is very important as any exercise expert will tell you. We also got to see a crashed car being lifted from the Water of Ae, which we would otherwise have missed. 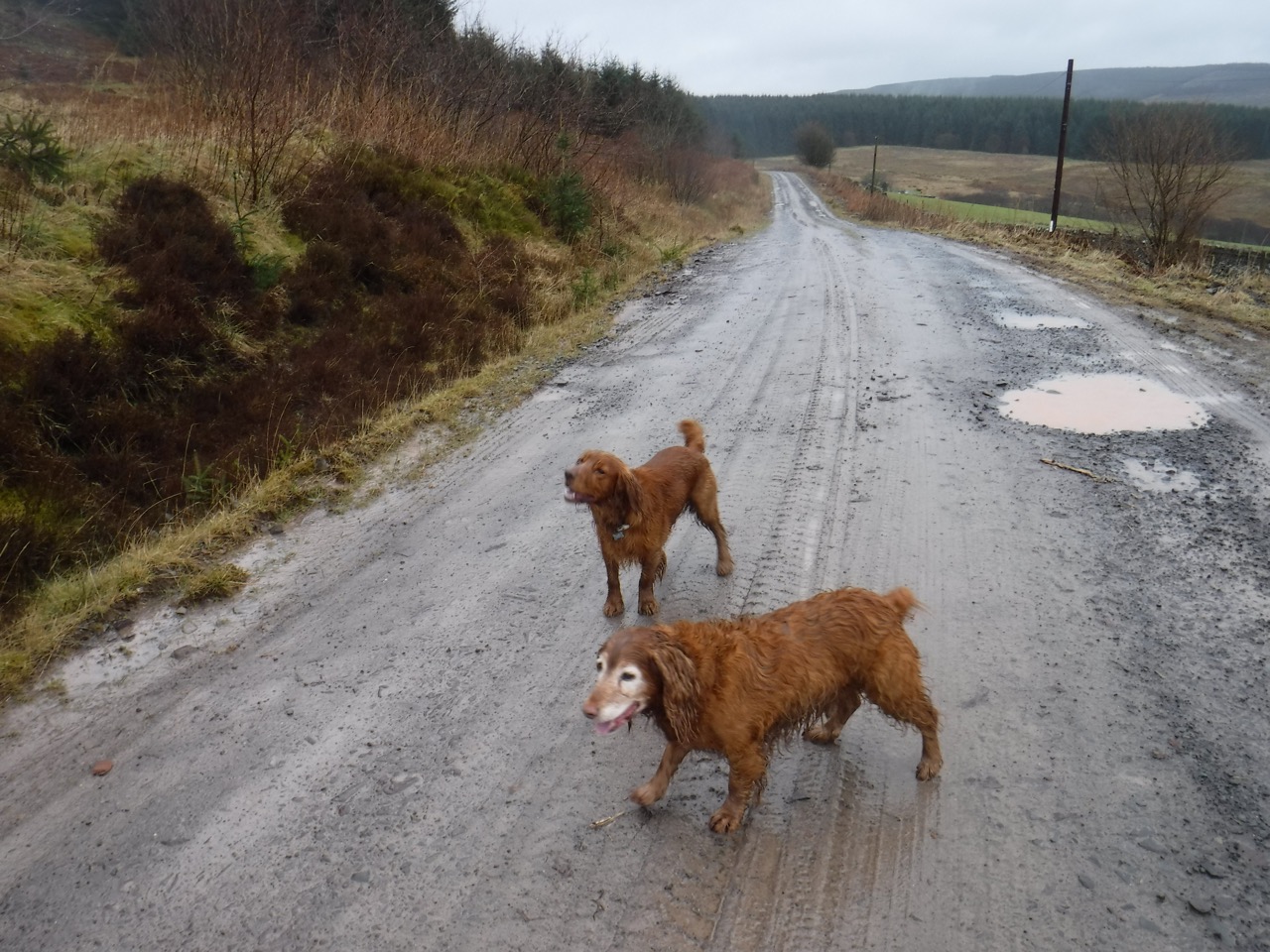 After leaving the car park we should have headed left, not right, then turned right after perhaps 50m, where a sign points to “Beattock 15 miles”. Once back on the proper route, after our mile and a half warm up, we headed up a forest track and began our long walk through the forest.

I like to think of walks in stages so I know how we are getting on. For this walk I had in mind places about three miles apart: a track junction north of Brownmoor Hill; a quarry near Grey Mare; and the Blue cairn, which would have been close to the end. With the longer walk these thirds became quarters.

In the first quarter we climbed 200m, which could also be expressed as “was uphill”. We came across the first “South Scotland Countryside Trail” markers, and I’ll have to say that the route was well marked, with markers at every junction along the whole 12 miles. Quite unlike our experience of the SUW where markers seemed placed at random, often beside a trail where there was no option, but missing where one needed to chose between three ways. But perhaps that’s part of the SUW experience.

With the weather so dreich, long distance views were limited. We could see the small hills between Amisfield and Lochmaben, but little beyond that. The forestry track took us through forestry plantations in all stages from new plantings to new fell. There were stacks of logs marked “Fire Wood” and trees whose roots had lost the battle with the wind.

As ever, the edges of the conifer forests had smaller deciduous trees: holly, willow, hawthorn, and others I couldn’t identify with deep red berries. The weather, the knowledge that we had a long walk ahead of us, and the extra mile and a half we had tagged on the start put me off too much off-track exploring and examining of these trees. 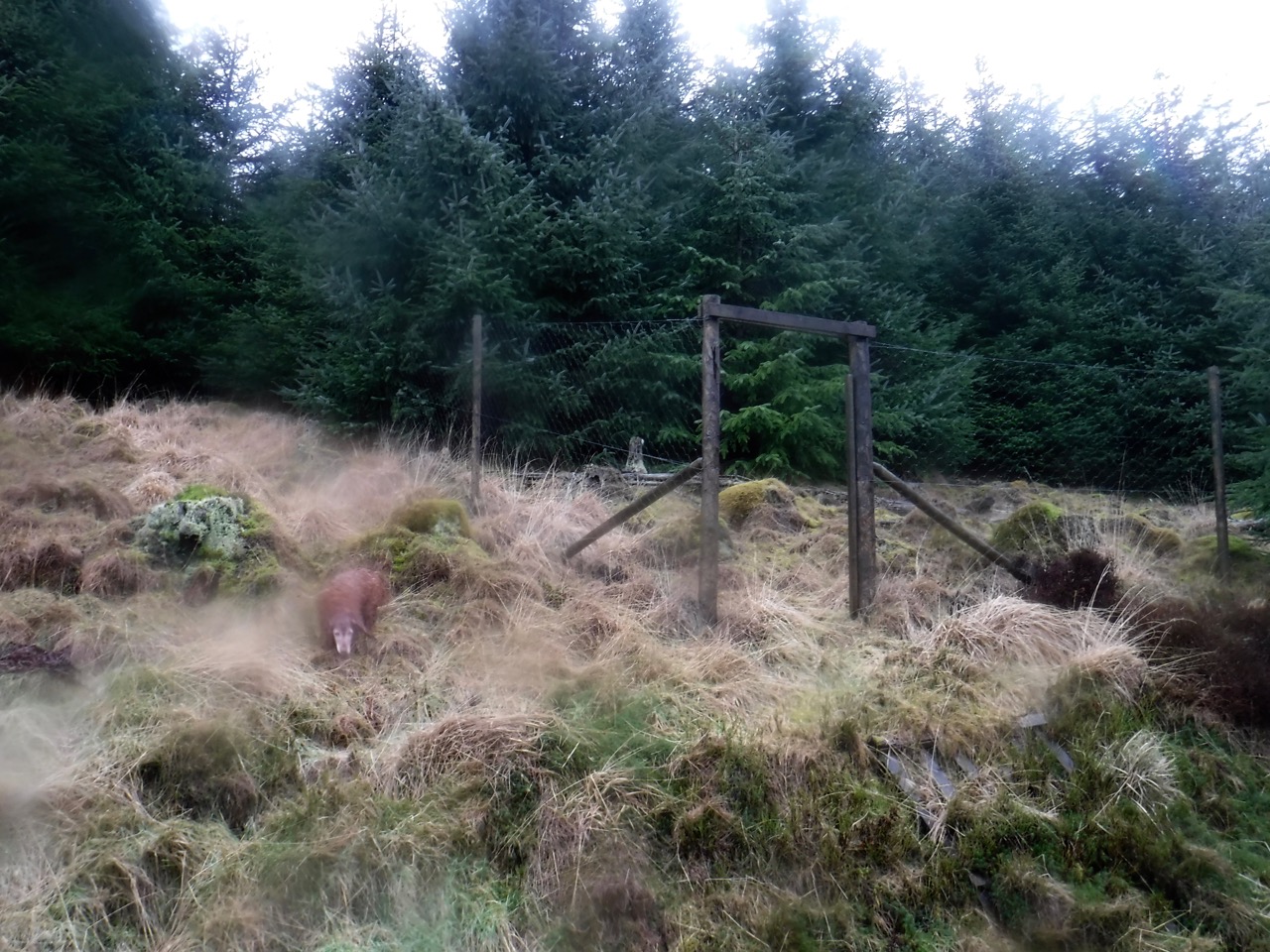 We passed the first of several unusual fencing constructions here: a deer fence judging by its height but with openings where the gates would be, somewhat undermining the purpose of the fence I would have thought. More on unusual fences later.

The track to Lamphitt had a sign but in general there was nothing to differentiate the track junctions. By following our progress on the map, however, I was able to recognise that we had passed the one quarter mark. 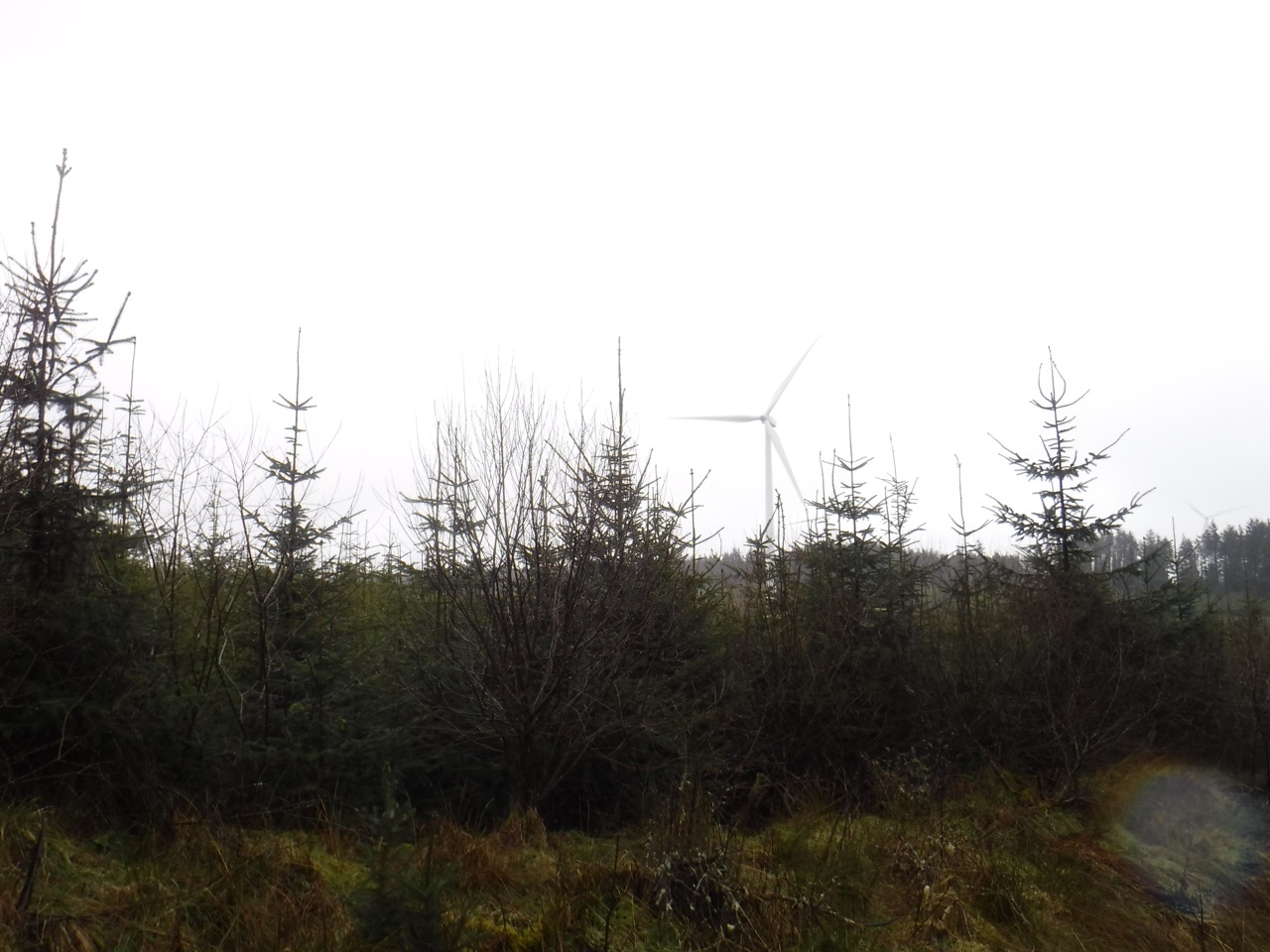 As we entered the second quarter of the walk we saw the first of the Harestanes wind turbines, and as we drew closer we could hear them, sounding like jets flying high above us. This wind farm is quite large. The Scottish Power website says there are 68 wind turbines with an output of 136 megawatts. (UK energy use in 2014 was 2449 TWh). It took us two and a quarter hours to walk through it.

Setting aside practicalities for aesthetics, these turbines are quite an eyesore, though no doubt we will  grow used to them. What is unusual here in Ae is that most of the turbines stand among trees which tones down the eyesore-ness to some extent. It was almost eerie that when the wind picked up I noticed a nearby turbine stop and within a couple of minutes all the others we could see had stopped. 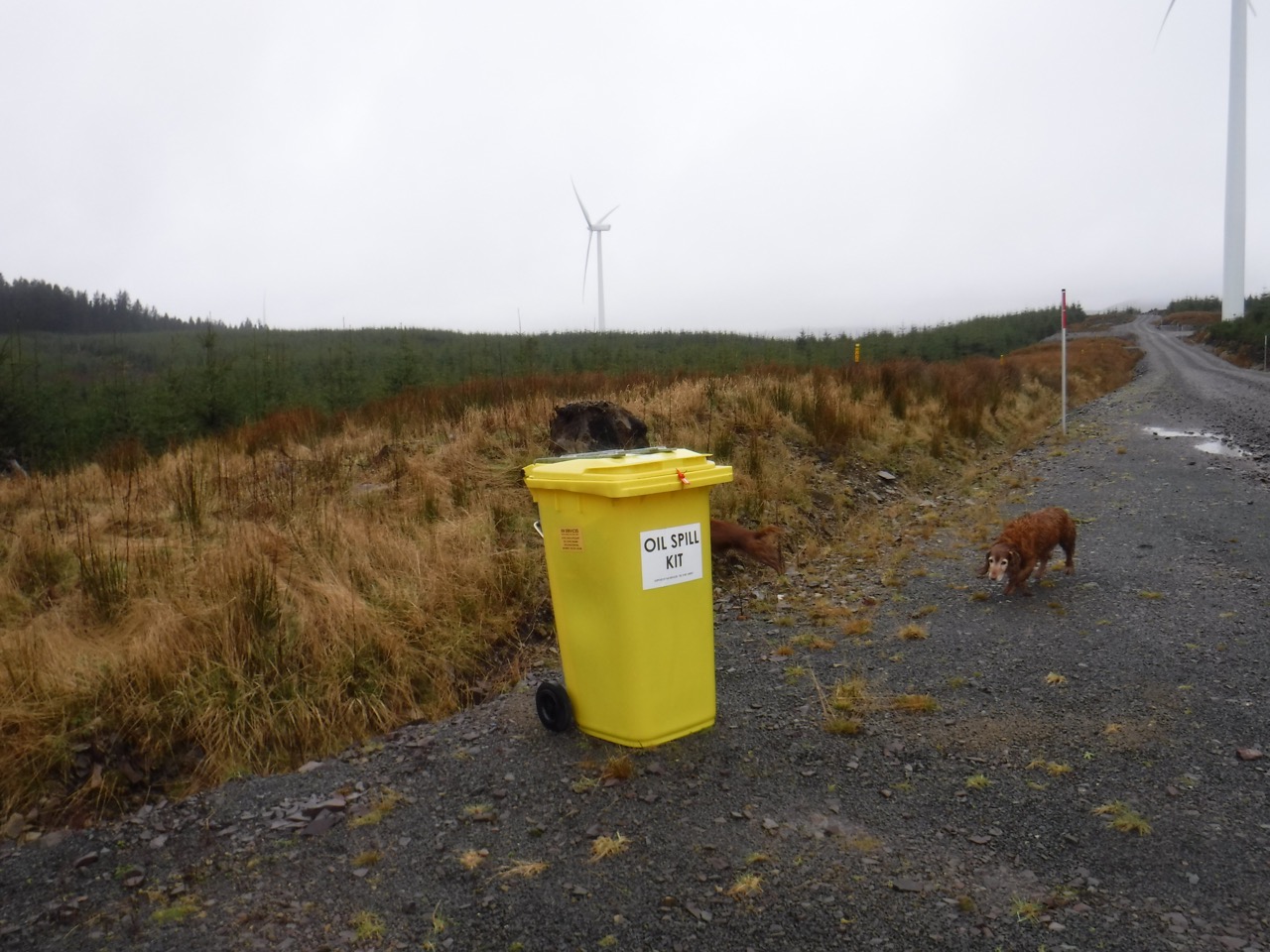 We saw our first (of three) yellow wheelie bins, “Oil Spill Kits”. My curiosity eventually got the better of me and I went to see what was in the bin, but it was sealed. These seemed to be placed randomly, but presumably there is some reasoning behind it.

In the wind farm the tracks are more substantial, as they would need to be to get the turbines in. Besides signs for “Turbine 11” or “Met Tower” etc. were several markers along the tracks. In this section we saw the first snow markers, further on these were joined by small underground cable markers, and later by larger yellow topped poles, warning of 132kv cables. I did think that was unnecessarily accurate. 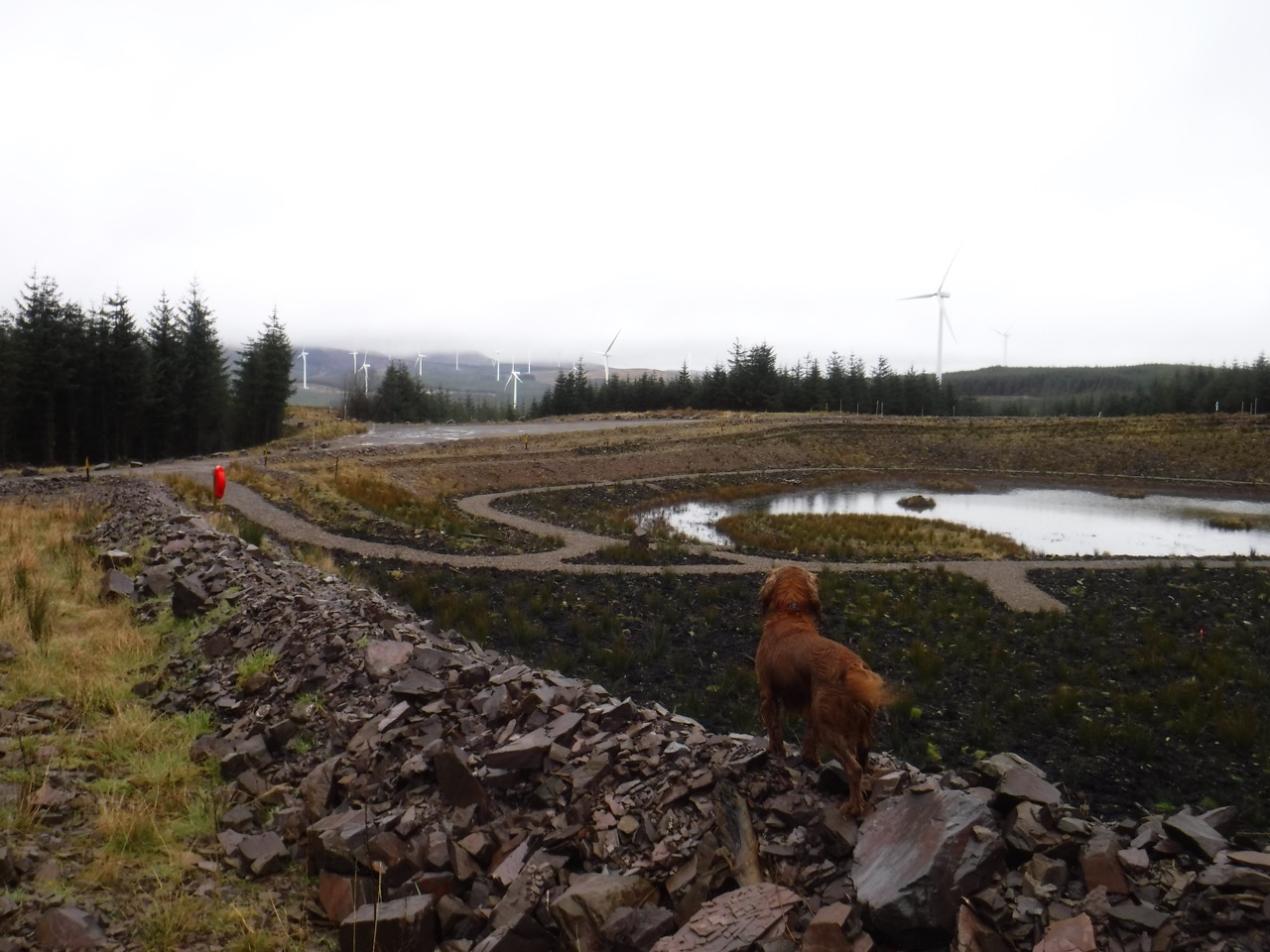 Where I expected a quarry near Grey Mare, marking the halfway point of the walk, we found a landscaped pond, with surrounding paths and artistically placed rocks. Presumably this was once the quarry marked on the map. Why it has landscaped into a ornamental pond in such an isolated spot, a two hour walk from the car park, I don’t know. It will be interesting to see how it matures in the next couple of years.

From the track above the pond it should be possible to see Queensberry, but its top was hidden in cloud. Only the lower Wee Queensberry could be seen, its unusual shape easily identified. i think I could make out the cairn on High Church later in the walk, when we were a bit closer.

The weather put paid to lounging about for lunch but did abate enough for us to sit on some trackside boulders while eating our sandwiches. I think we (except Eddie) needed a rest. Dark Chocolate with crunchy coffee beans ensured I didn’t flag. 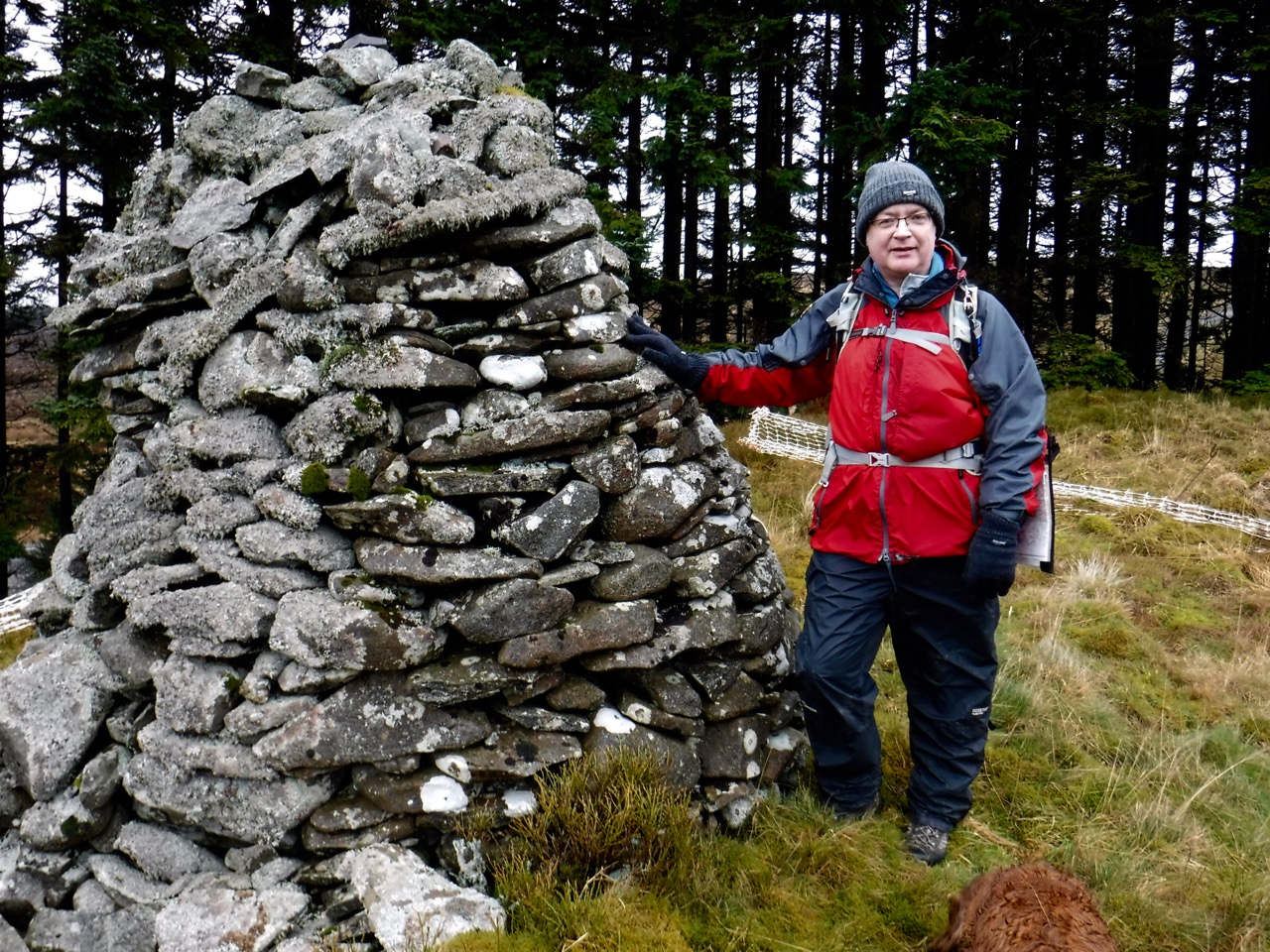 Our next landmark was the Blue Cairn on Hound Rig. Reading descriptions of this cairn, I gather that the “Blue Cairn” is the mound rather than the rocky “beacon” atop it. Older sources say “It is said that Wallace, who was encamped on Queensberry having seen the approach of a party of English and hastening to attack them, had met them on this spot; a bloody battle ensued in which the English were beaten” and older OS maps are marked “Site of Battle between Wallace and Greystock and where the latter fell.”

More modern archeology however, states that the cairn (meaning the mound) is undoubtedly from the Bronze Age, and the stone cairn atop it is described as a “beacon” 3m high, of more recent ancestry. We had stood looking at the cairn thinking it didn’t look particularly blue, but we were looking at the modern stone cairn whereas the real Blue Cairn itself is buried under a mound of earth. Perhaps it was blue?

Having reached the Blue Cairn we were close to the end of our walk as originally planned, but still had 3.7 miles to go to reach the car. I think we were all flagging a bit, except for Eddie, who never stopped exploring the woods either side of the track with the energy of a pup. 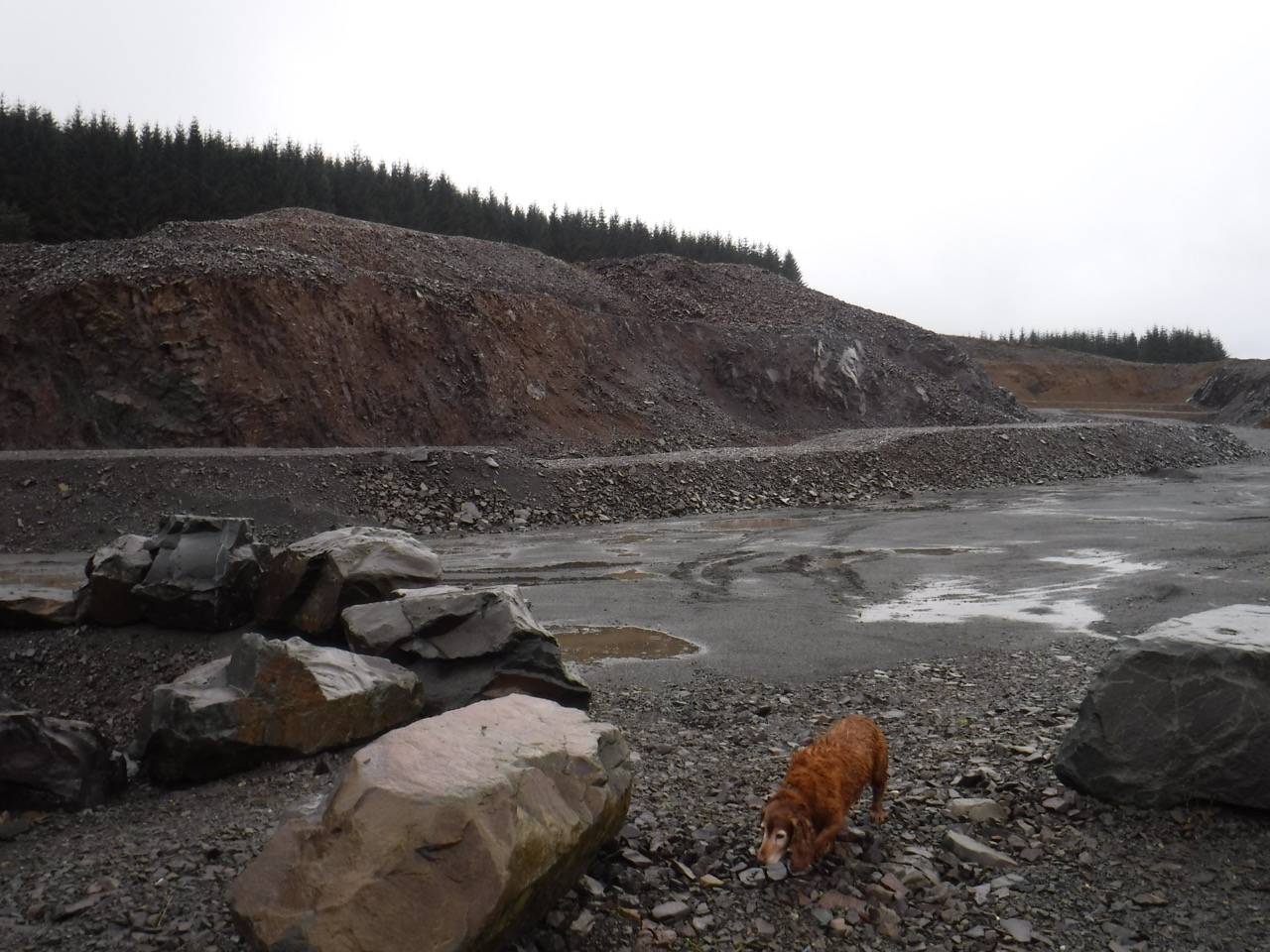 There is another massive quarry below Moannathairy at NY024992, which is where I had hoped to park originally. Unlike the other quarry, this still looks as it would have when in use. There are boulders blocking access to vehicles though, so I presume it isn’t being quarried actively at present. Perhaps it too will be landscaped? 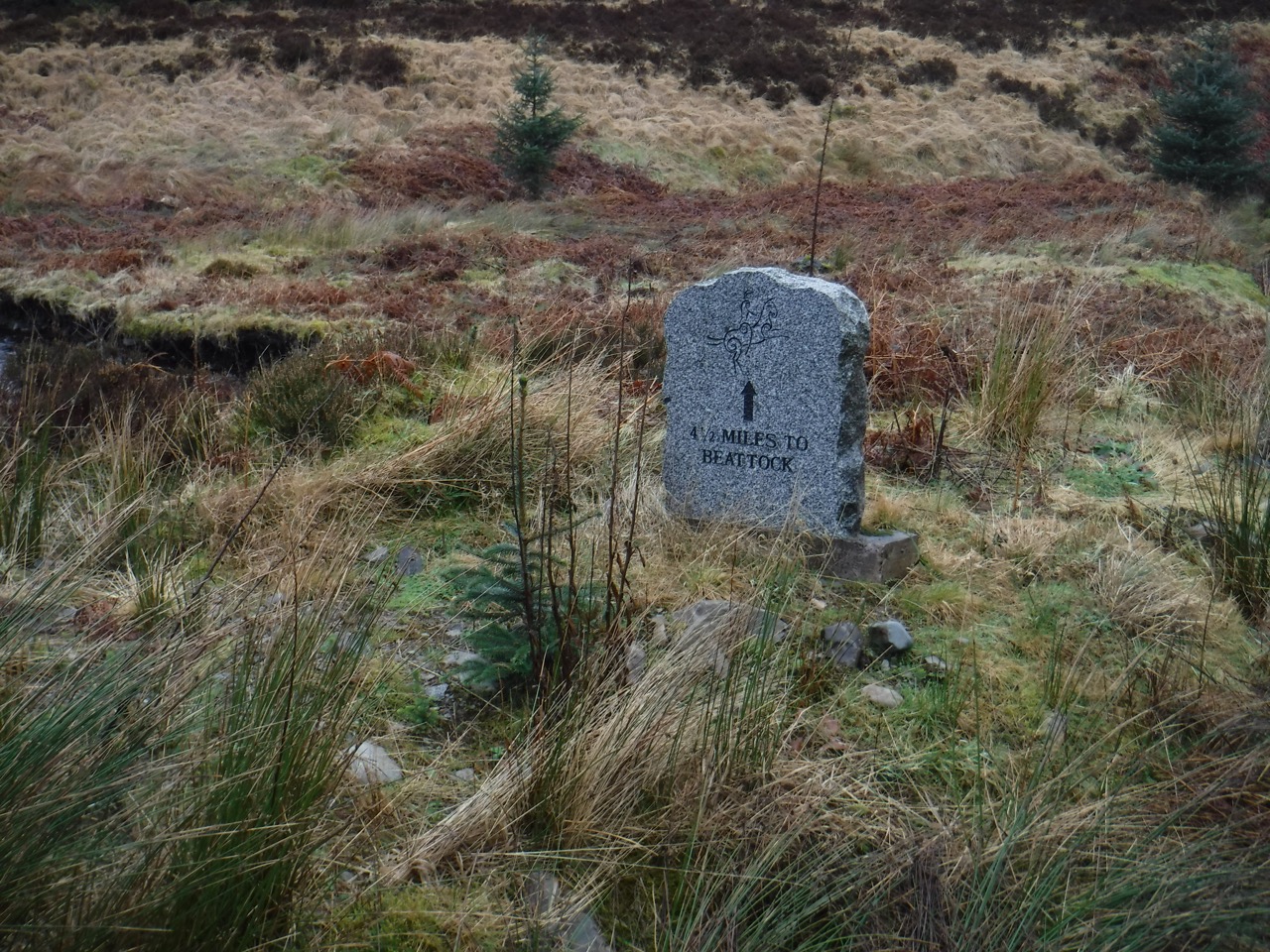 We crossed the Lochan Burn and the Kinnel Burn on their new bridges, with the older bridges lying nearby. On a previous walk, Audrey and I had had to wade across the Lochan Burn, with me carrying a wee Eddie who was too frightened to get in the water. I did suggest we could wade across rather than using the bridge for old times sake, but Audrey didn’t seem very keen. She probably didn’t want to damage her new boots. 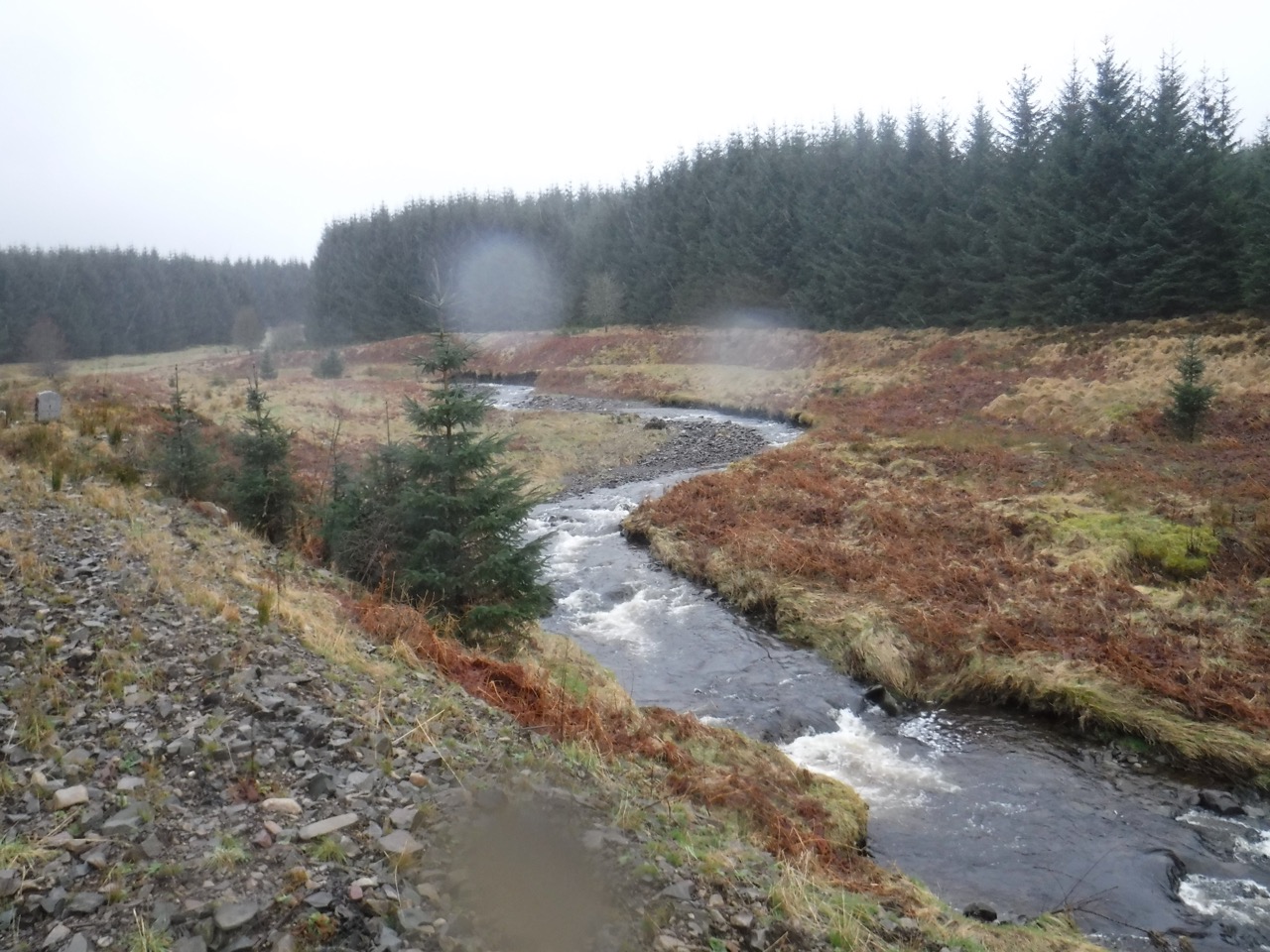 Lohan Burn…anyone for wading it?

By the Lochan Burn, was a Romans and Reivers stone, looking like a gravestone. It told us we were 4.5 miles from Beattock. I remembered the stone at Earshaig (not too far from where we were parked) but I couldn’t remember if it said 1.5, 2.5 or 3.5 miles to Beattock. (It is actually marked 2.5 miles to Beattock). 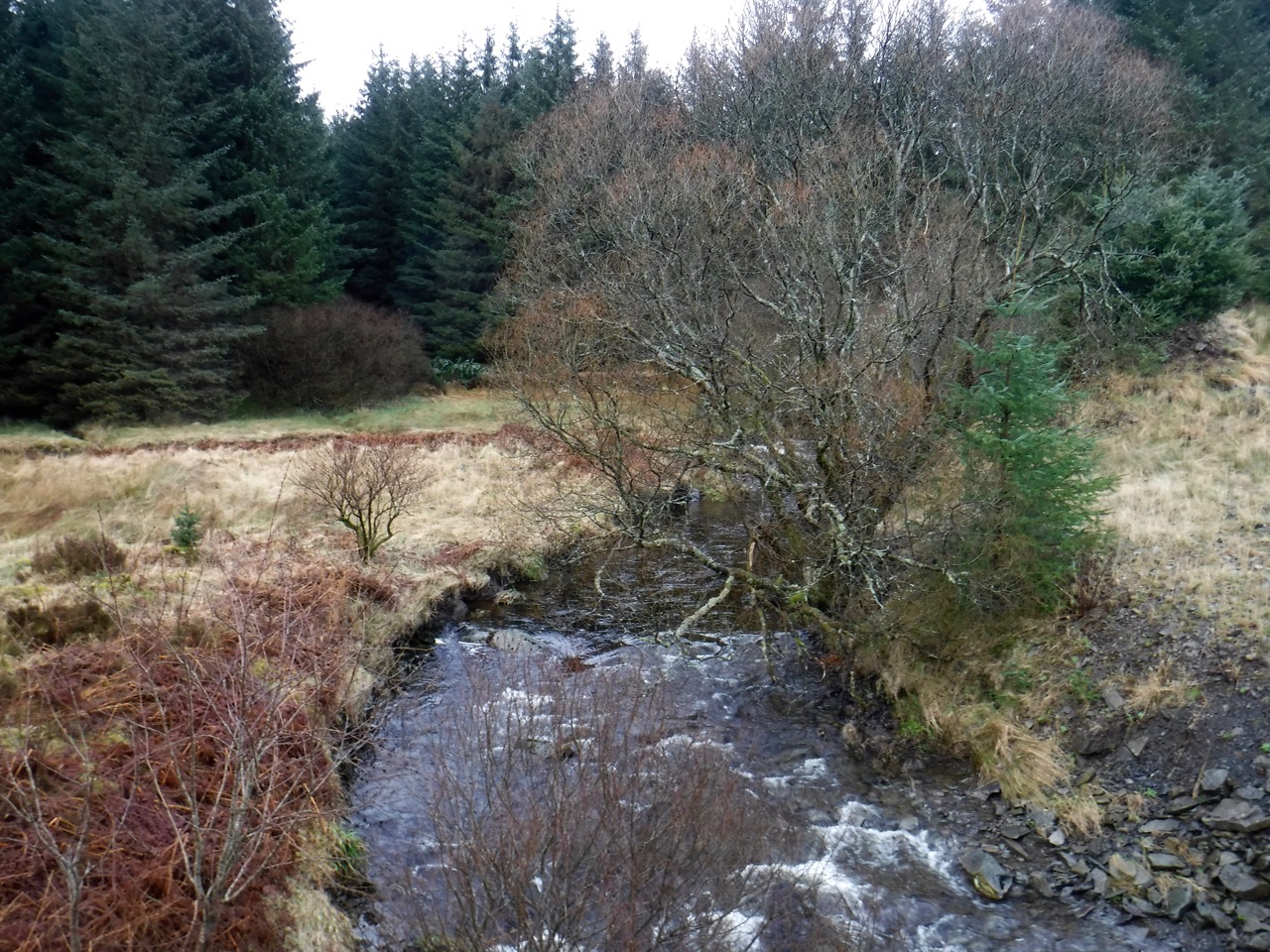 After crossing Kinnel Burn the forest was giving way to moorland, or at least felled forest morphing into moorland. What looked like a cairn on a small knoll caught our eyes but I didn’t fancy the terrain separating it from us. I would have been unimpressed to spend half an hour trudging through difficult terrain to find it was a tree stump.

We passed several fenced areas by the road shaped a little like small lay-bys. I think these contained access ports for the underground cables. They were fenced off on the forest side but open on the road side which seemed rather strange.

The rain stopped and I recall hoping that the wind would dry the dogs a bit. Almost immediately the rain started again but as we trudged along the sky did show us a twinkling of blue and the sun shone enough to provide a rainbow. 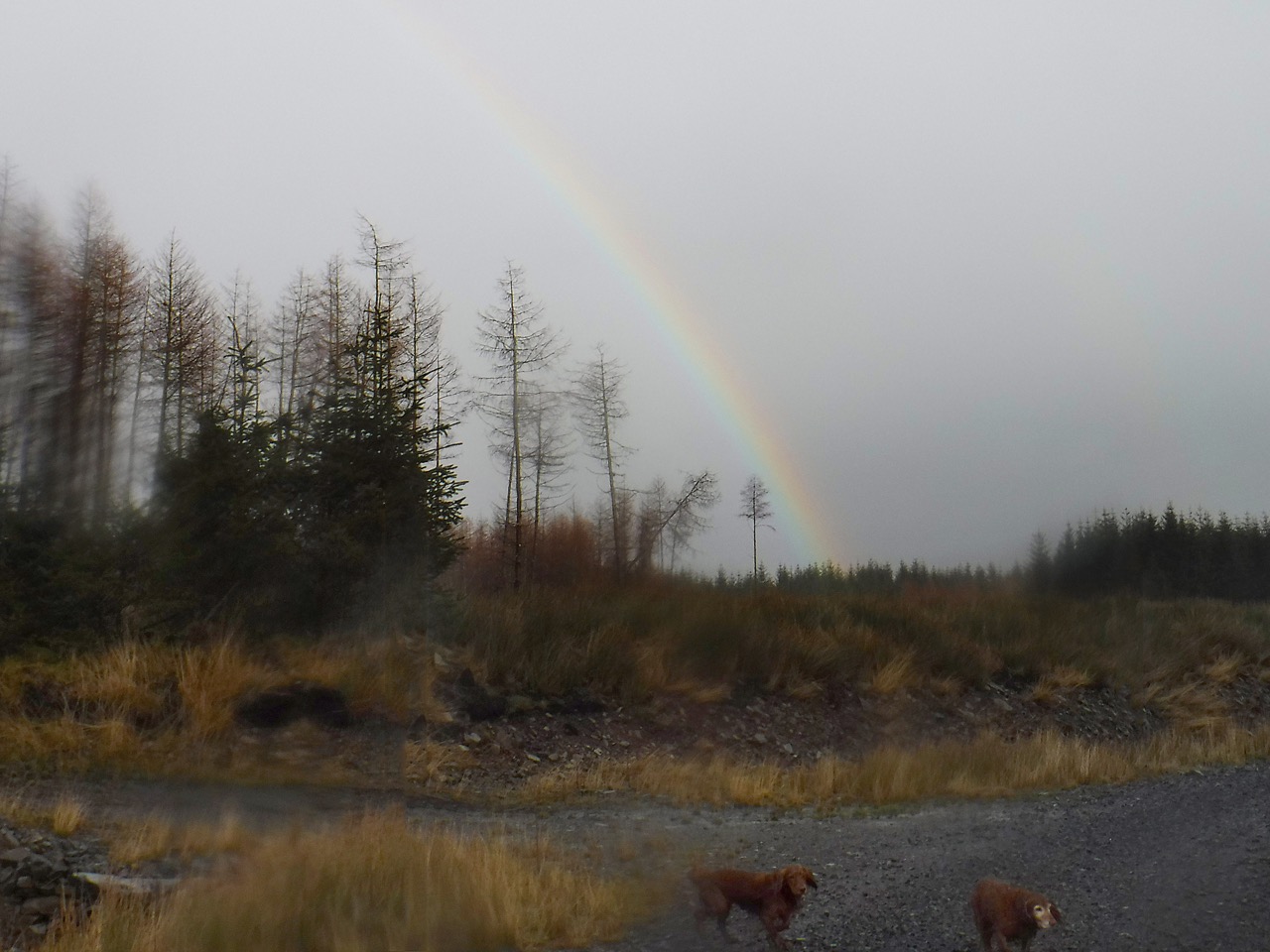 Our final sight was a large hare, still in winter livery, that came out of the forest and ran along the track. Eddie missed it because he was in the trees.

Share this...
This entry was posted in Dumfries & Galloway and tagged Ae, Romans and Reivers, Winter. Bookmark the permalink.