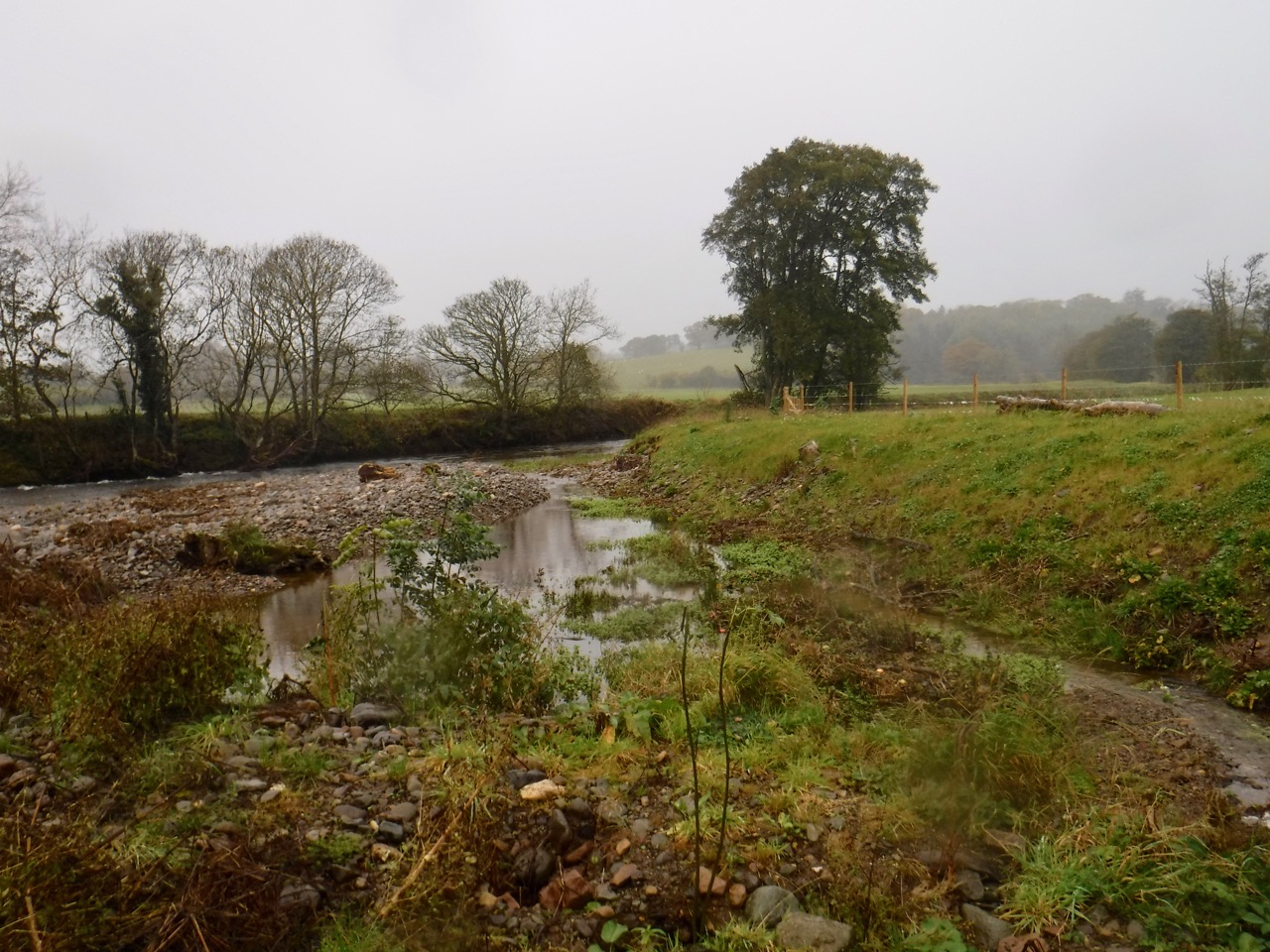 This was the final leg of our Cumbria Way walk: St Mary’s Church Sebergham (which is not in Sebergham) to Carlisle’s Market Cross. The forecast 12 hours before the walk was rain, but on the morning that had improved to grey skies but dry. It was raining as we drove to Carlisle, but we were optimistic it would settle. We parked in Carlisle, walked over to the railway station and took a taxi to our start-point. By the time we arrived at the church, the skies were indeed grey and it was dry enough to use the dry weather camera and forego waterproof trousers.

The Cumbria Way heads north from the old church, along a farm track guarded by hedgerows. The recent rain had left short sections of the track underwater forcing us at times onto the slightly higher ground beside the hedges. It could have been worse. 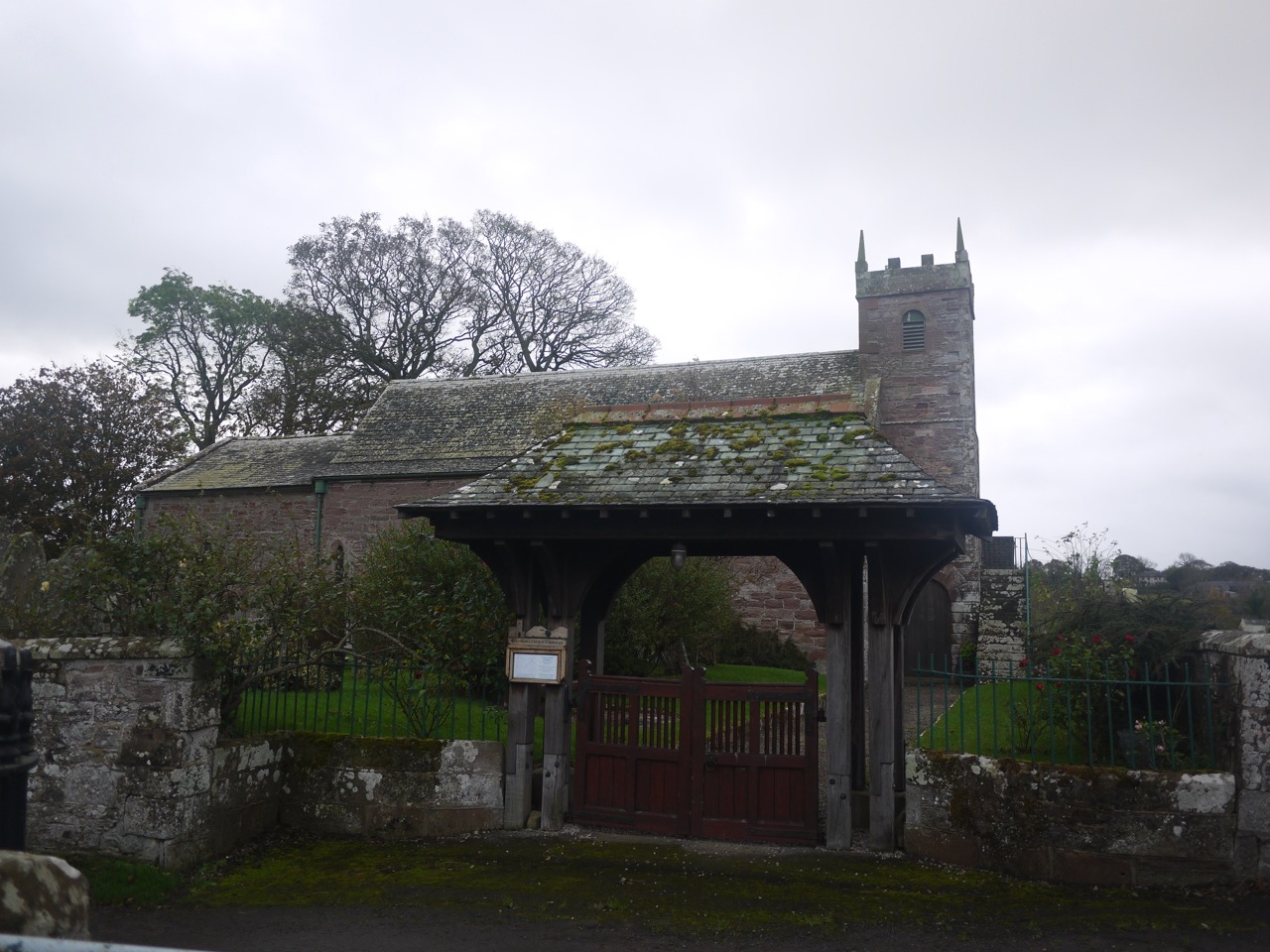 The farm track took us to Sebergham Hall but then disappeared into a gate marked “Private no entry”, so the CW passes around the house grounds and rejoins the track on the far side. This gave us our first, and sadly not last, taste of walking through cattle churned mud. But we picked our way through, avoiding the worst of the quagmire and regained the track. The occasional drop of rain imperceptibly increased as we walked, so I pushed the camera into my pocket. Even when the rain became a constant drizzle we decided that it might be a passing shower and decided against breaking out the waterproof trousers, yet.

Bell Bridge was where the walk went pear shaped. The CW crosses the River Caldew here, but the bridge was closed. Workmen were beavering away on the bridge so we shouted over to ask if we could cross. No luck. One of the men fetched his supervisor who told us the bridge was unsafe and had been closed to the public for two years. He couldn’t let us cross. The nearest crossings were back at Sebergham or further along the river, perhaps a mile northwards. 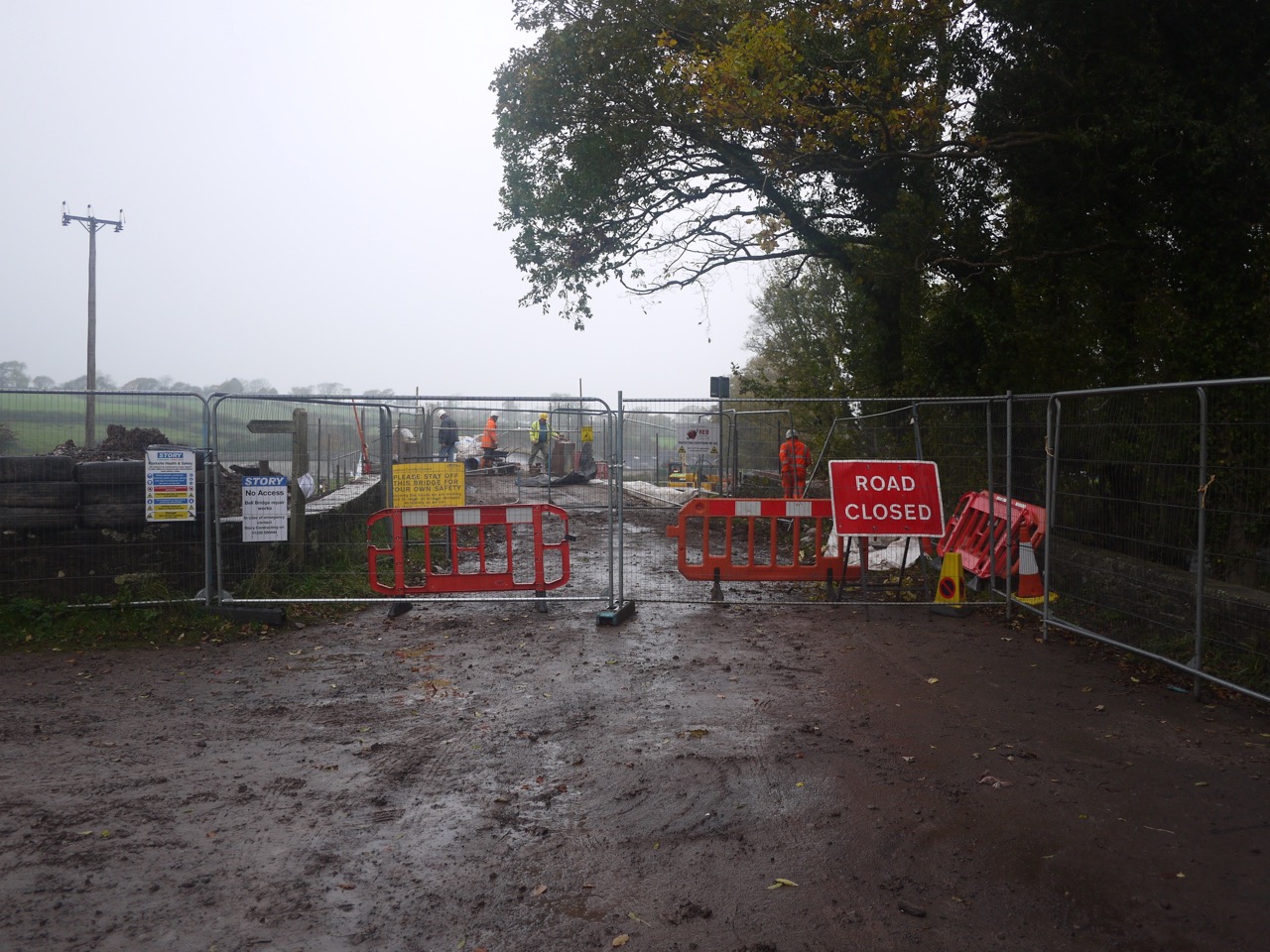 It was somewhat annoying that there had not been any notices earlier on the walk, since we could have walked along the minor road from Sebergham. So we faced a choice between a 3 km round trip to reach the other side 20m away, or ‘a mile’ north without extra distance. We decided to head north by staying close to the river until we reached the bridge. There was not a bridge marked on my map but there was a place called Bog Bridge a couple of kilometres north and it seemed likely that such a place would have a bridge. What I had not considered was the adjectival part of the name.

Another footpath did head in the right direction, at first, but after taking us up a small hill it headed away to the east, so we struck out across fields to get back to the river. Once on the lower ground the ground was waterlogged, in places churned into cloying mud by cattle, and where it was not churned it was often too boggy to cross, requiring detours to find narrower sections of bog. The rain was now much heavier so I put way my dry camera and put a waterproof cover on my rucksack. My trousers were soaked through so there was little point in donning waterproof trousers. We did manage to find the remnants of a riverside path, which judging by churned mud, is used mostly by cows.  This clay mud stuck to my boots making them noticeably heavier. Some sections were impassable they were so muddy and we also had to cope with fallen trees and barbed wire. Skirting around these took us on to slippery muddy slopes. but at least neither of us ended up sat in the mud. 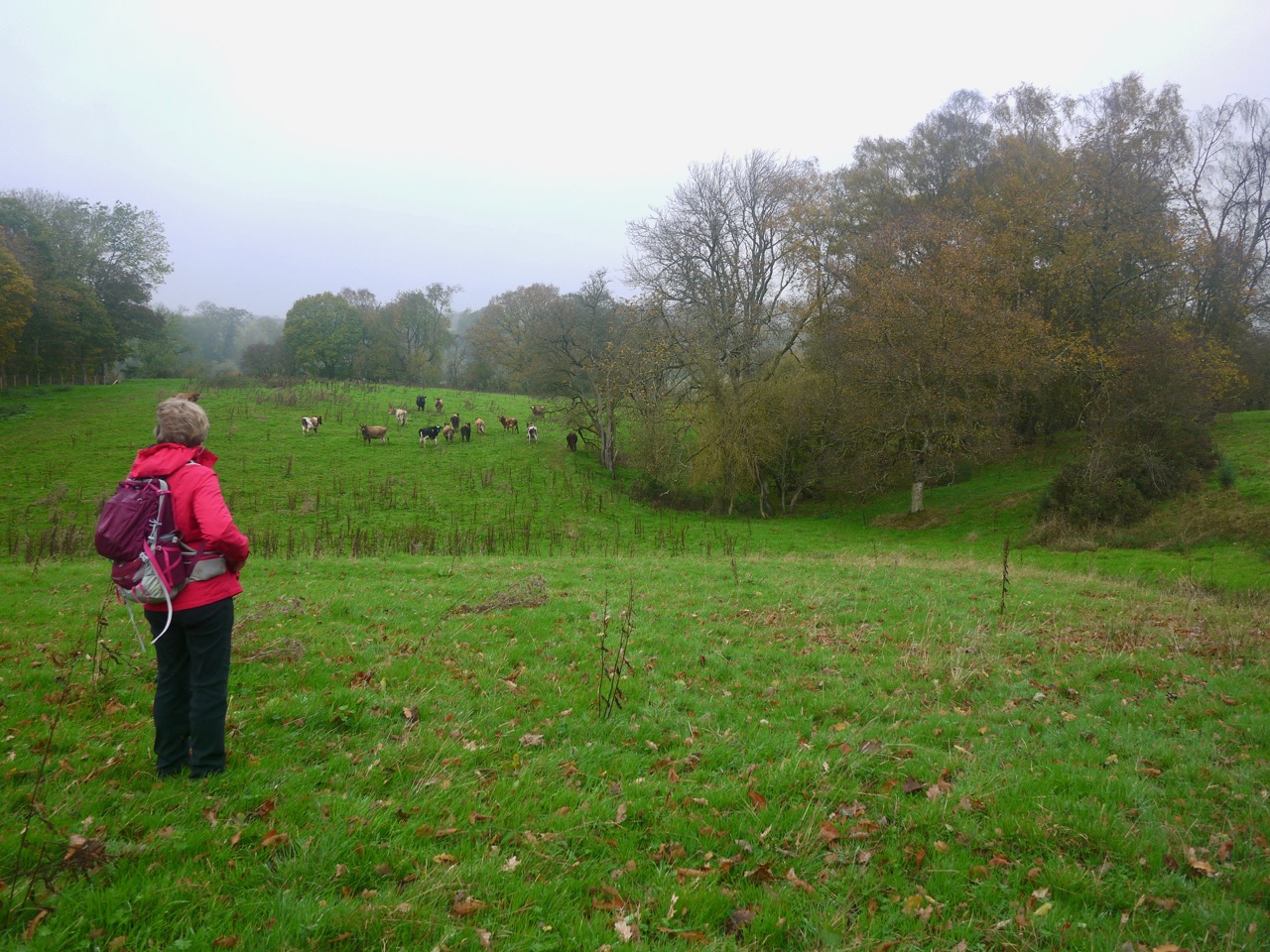 Once back into open fields we found the fences topped with barbed wire but managed to find a way along easily enough until we came to a small stream. Both banks were guarded by barbed wire fences. Where there were overhanging branches to use a handholds there was no ground on the other side, the bank dropping directly into the water. And the fences were all new and strong. Our way across was to backtrack a little and crawl under the barbed wire, walk along a rocky outcrop into the river and jump across where the stream joined it. This left us to climb another barbed wire fence beneath a tree, using the overhanging branches as handholds and crawl under another fence further along. What fun we had.

Once back on our way, in the more inviting terrain of muddy fields, we got our breath back and after leaving a field via a gate (rather than under a barbed wire fence) we found ourselves back on a footpath. And there ahead, a footbridge. A small plaque told us the bridge had been built in 2013. It had apparently been washed away in the floods of 2012. After pausing to look at a lonely pink flower beside the bridge (himalayan balsam) we crossed the Caldew and rejoined the Cumbria Way proper. Though there were no CW markers and no discernible track. We walked on beside the river in the rain. I recognised the moment my trousers became fully waterlogged and water ran down inside them, and the first wetness finding its way through my coat. At Rose Bridge I wondered if I should take my wallet out of my pocket (now wet) and put it in the rucksack, but decided that would be shutting the stable door after the horse had bolted.

Access to and from the road at Rose Bridge was by iron kissing gates designed for the slimmer walker. I was loathe (too lazy) to take off my rucksack to get through, and with a bit of manoeuvring and a deep breath to draw in my waist I managed to slip through. I thought I could hear the sound of laughter in the wind. Probably my imagination. 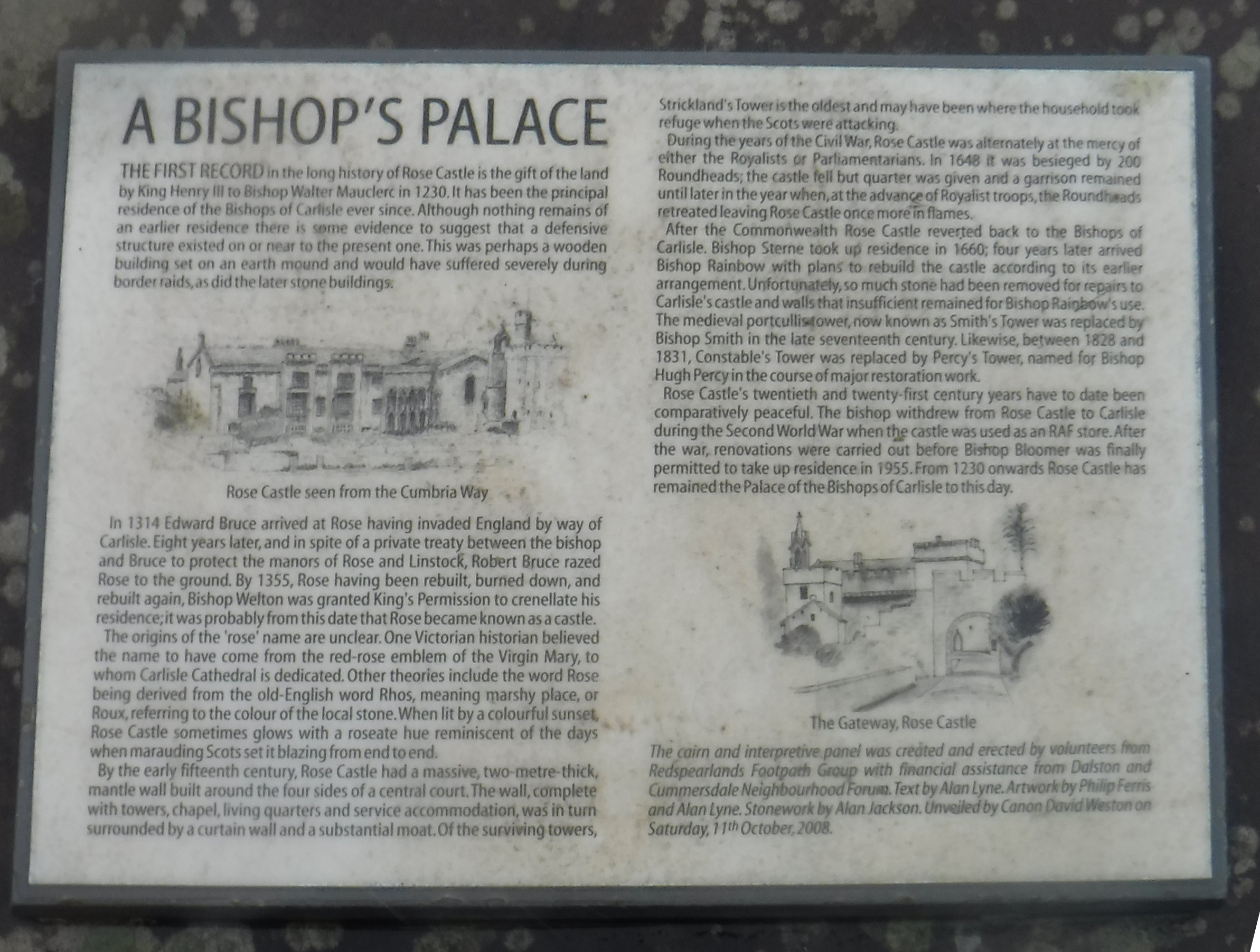 The rain did relent a little after we had passed Rose Castle and I looked back to see Audrey was quite a way behind, photographing Rose Castle I think. So I stood in the wind arms outstretched to aid drying.

We passed a large stand of Monkeyflower in another boggy field, and made our way through more mud until we reached Lime House School. Some thoughtful person had placed a walkway over one of the muddier sections, but had ordered the wrong size walkway. 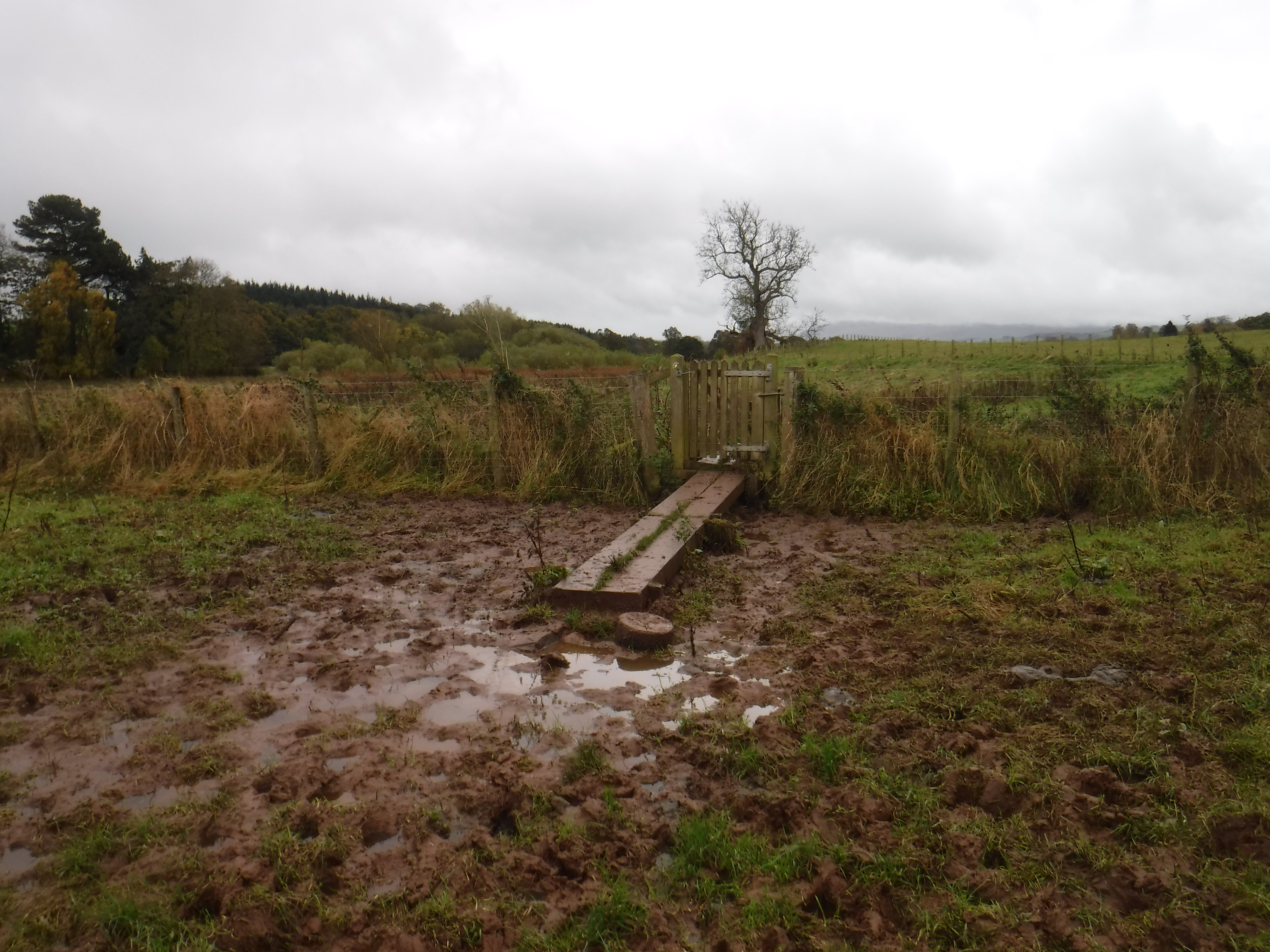 Walkway across the mud

From Hawksdale Hall, an impressive house, we crossed more muddy fields before reaching firm footpaths at Bridgend. In the village we found a wooden bench, in the lee of a Range Rover, which served us well for our lunch break. There was a bin nearby for my banana skin and the even the rain held off. As ever of course we found several other benches and picnic tables in better settings within 15 minutes of setting off after lunch.

A walk along some minor roads brought us to a footbridge across the Caldew and into Dalston. There were lots of folk walking their dogs, and more seats, the most unusual of which had a metal crow perched atop. This is an octagonal stone plinth, The Coronation Stone, commemorating the coronation of George V and a black metal seat back with the words “2000 while I live I crow” cut out of the top beneath a black and red bird. 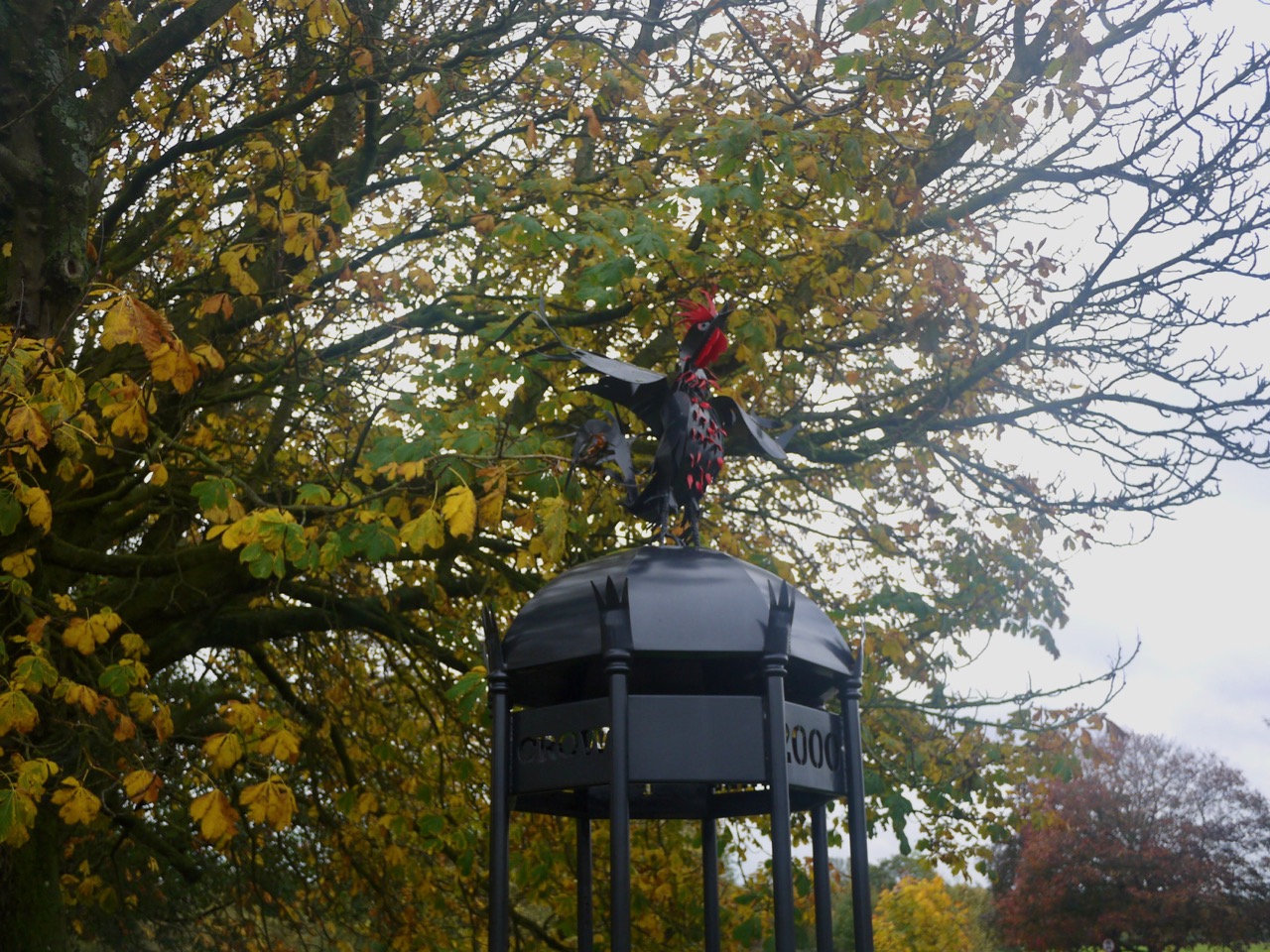 Dalston’s church dates from the 12th-13th century and though much of the building must be less ancient it still has the look of a very old church. There are large old yewtrees in the churchyard and an impressive war memorial, a Celtic cross with characteristic knotwork.

I think Dalston is where the Cumbria Way leaves countryside for industry, though the route manages to remain within greenery for most of the way. After walking through the village we left the road to follow a narrow footpath beside a school and back to the riverside. A pair of strange bollards ensured walkers went single file, or perhaps were to deter bodybuilders who had worked too hard on their shoulders.

This is the Caldew walkway/cycleway. It was good to be walking on firm footpaths for a while and by now my wet togs were mostly dry except the bottom of my trouser legs. We walked by several marker posts with numbers on each side, six in all, marked 6/1, 5/2, 4/3, 3/4, 2/5, 1/6. These had once had paintings on them but only a few had survived the weather.

But lest we pine for mud, our route took us off the tarmac of the cycleway onto a muddy riverside footpath, marked with the intriguing notice, “Permissive Path”. I took this to hold the meaning “allowed but not obligatory; optional“, rather than “allowing or characterized by great or excessive freedom of behaviour“. I was a little too tired to make much of the latter anyway. I look back now though and regret the missed opportunity. I could have picked wildflowers, carved my name in a tree, affixed a postage stamp upside-down… 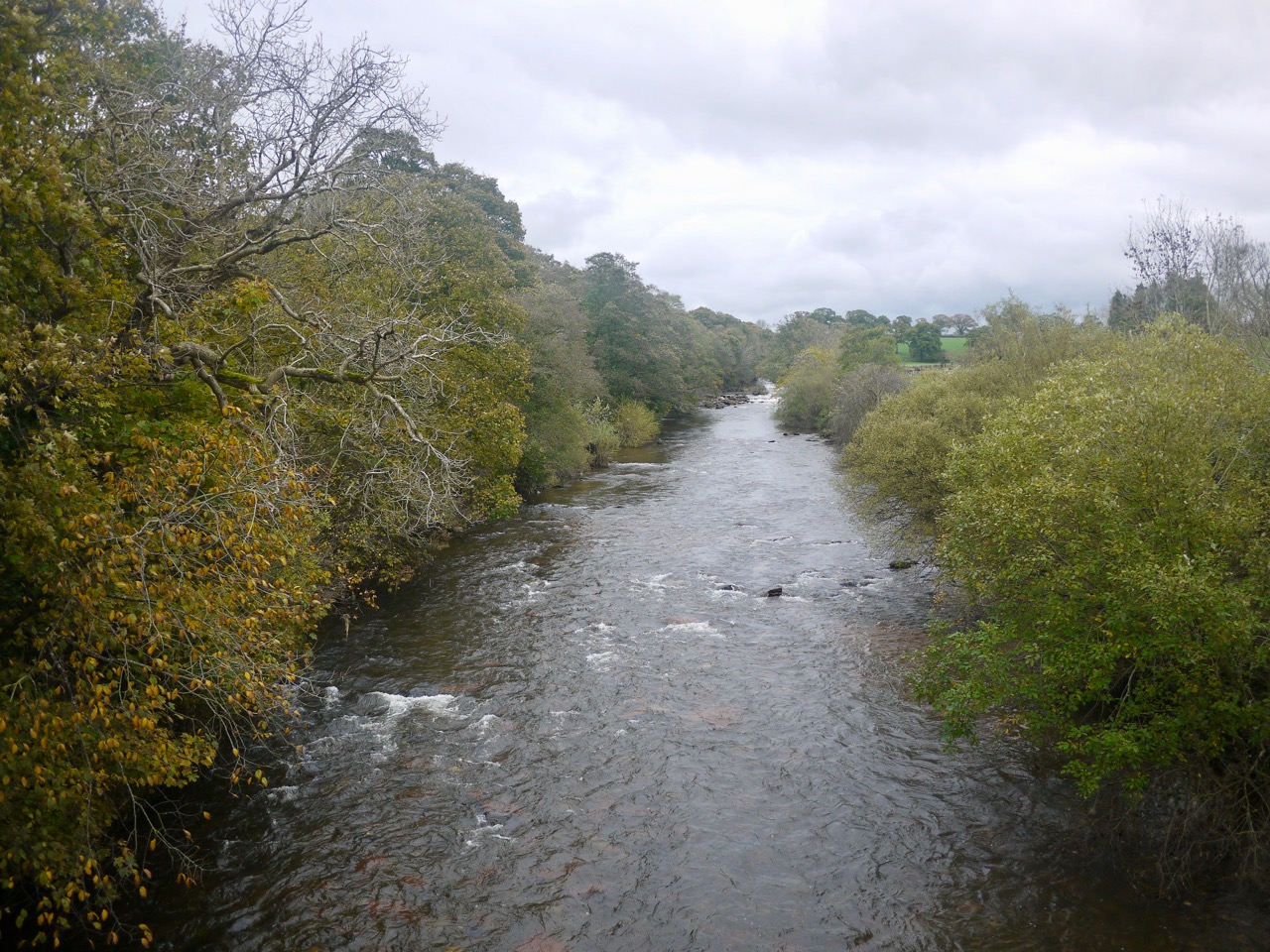 The permissive path return to the cycleway and some some large daisies excited my curiosity drawing me up onto a some disturbed ground. Here we found narrow leaved michaelmas daisy, mayweed and chamomile, all within a few metres of each other. Had we stayed on the path I don’t think I would have noticed they were different daisies.

We were next faced with an obstruction with fencing across the walkway but edged our way through the fences this time. The walkway then ran beside the railway for a kilometre or more. 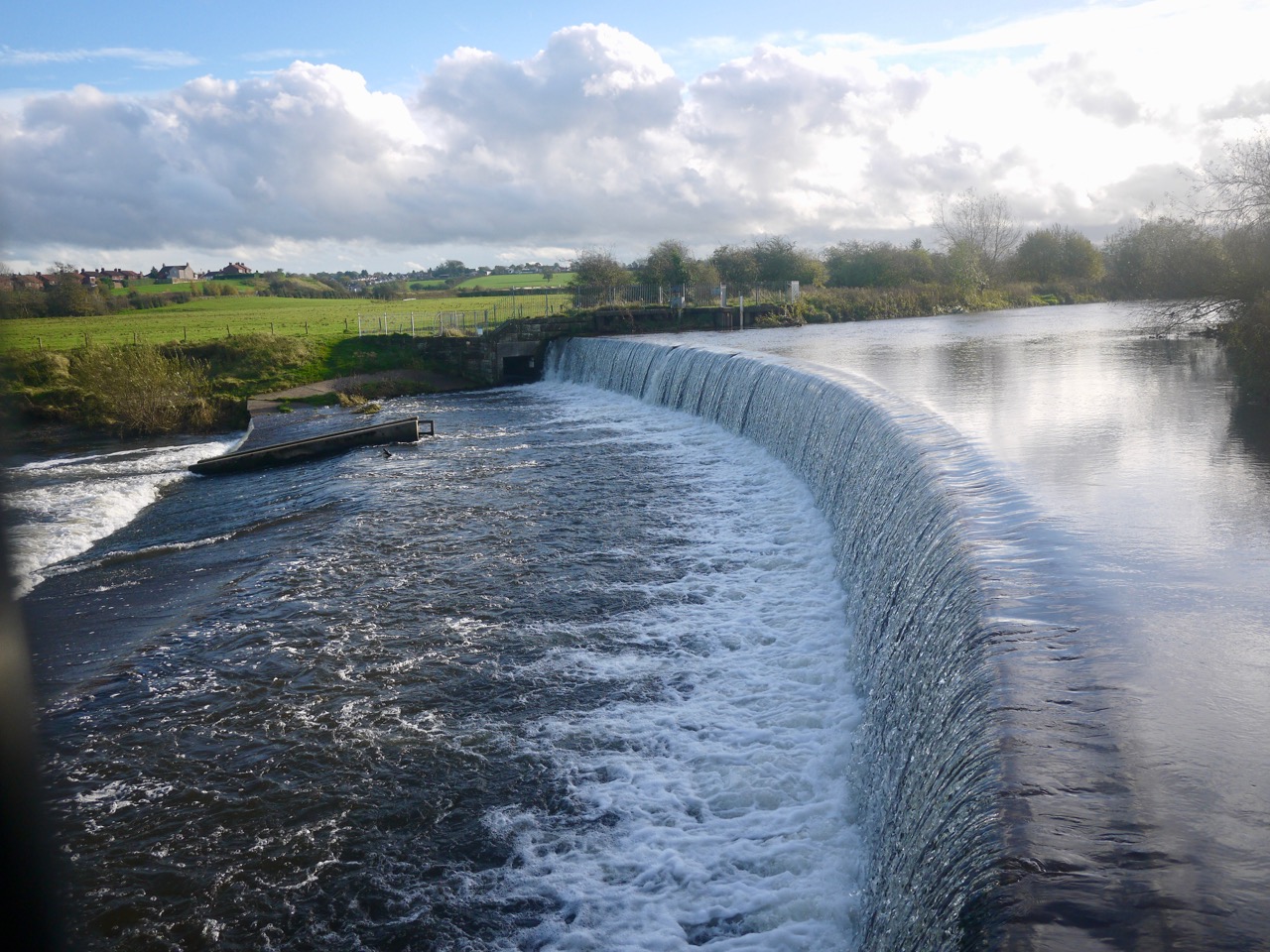 As we drew closer to Carlisle there was a riverside section with a little more mud, but eventually we were back on tarmac walking by a mixture of old industrial buildings and modern houses copying the industrial style.

The final mile or so took us by Carlisle’s castle and cathedral and then along to the main street and the official end of the Cumbria Way, the Market Cross. 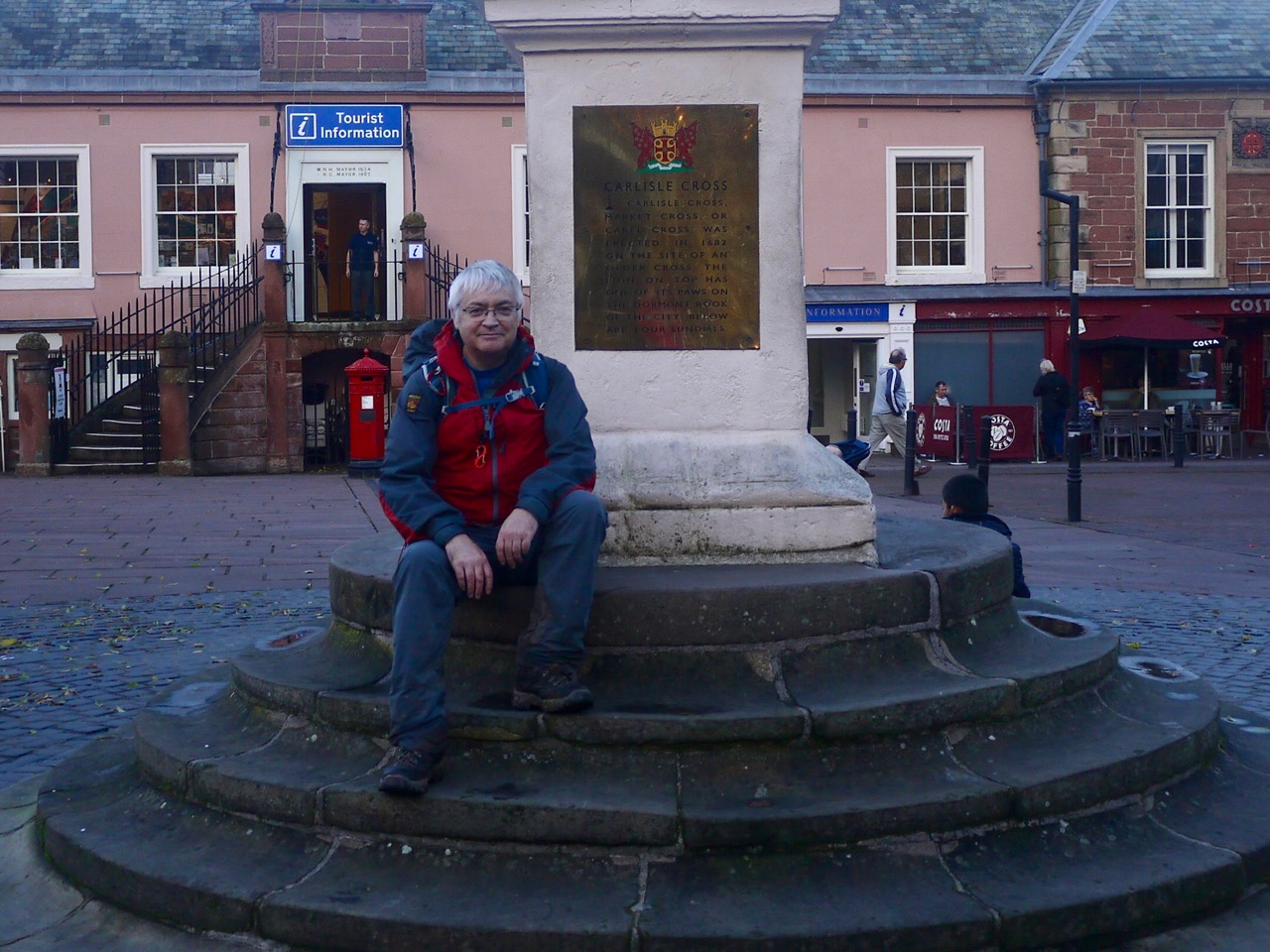 Here’s a summary of mileages and times: 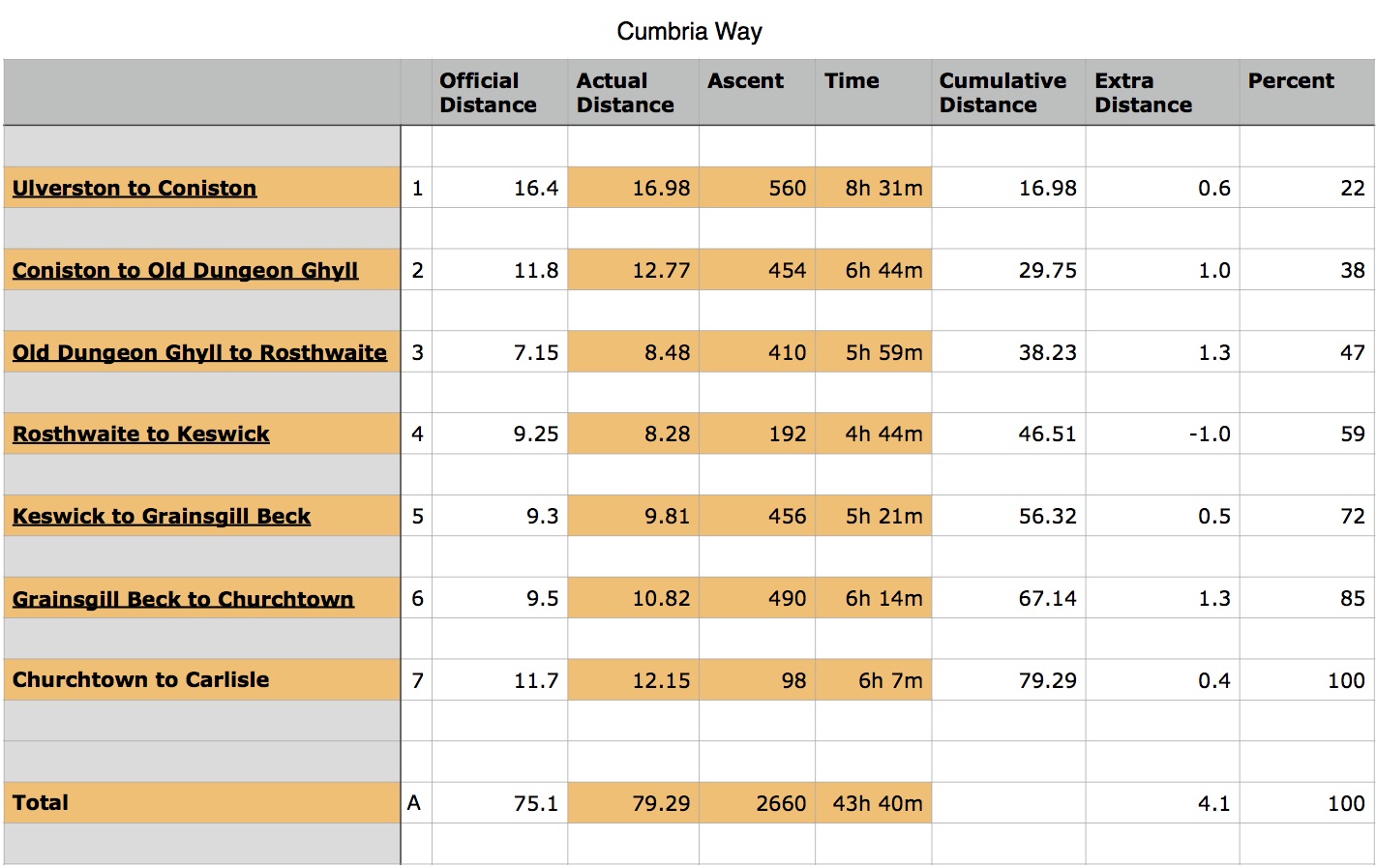 Share this...
This entry was posted in Cumbria and tagged Cumbria Way. Bookmark the permalink.