Hoddam Castle to the Solway: AW5 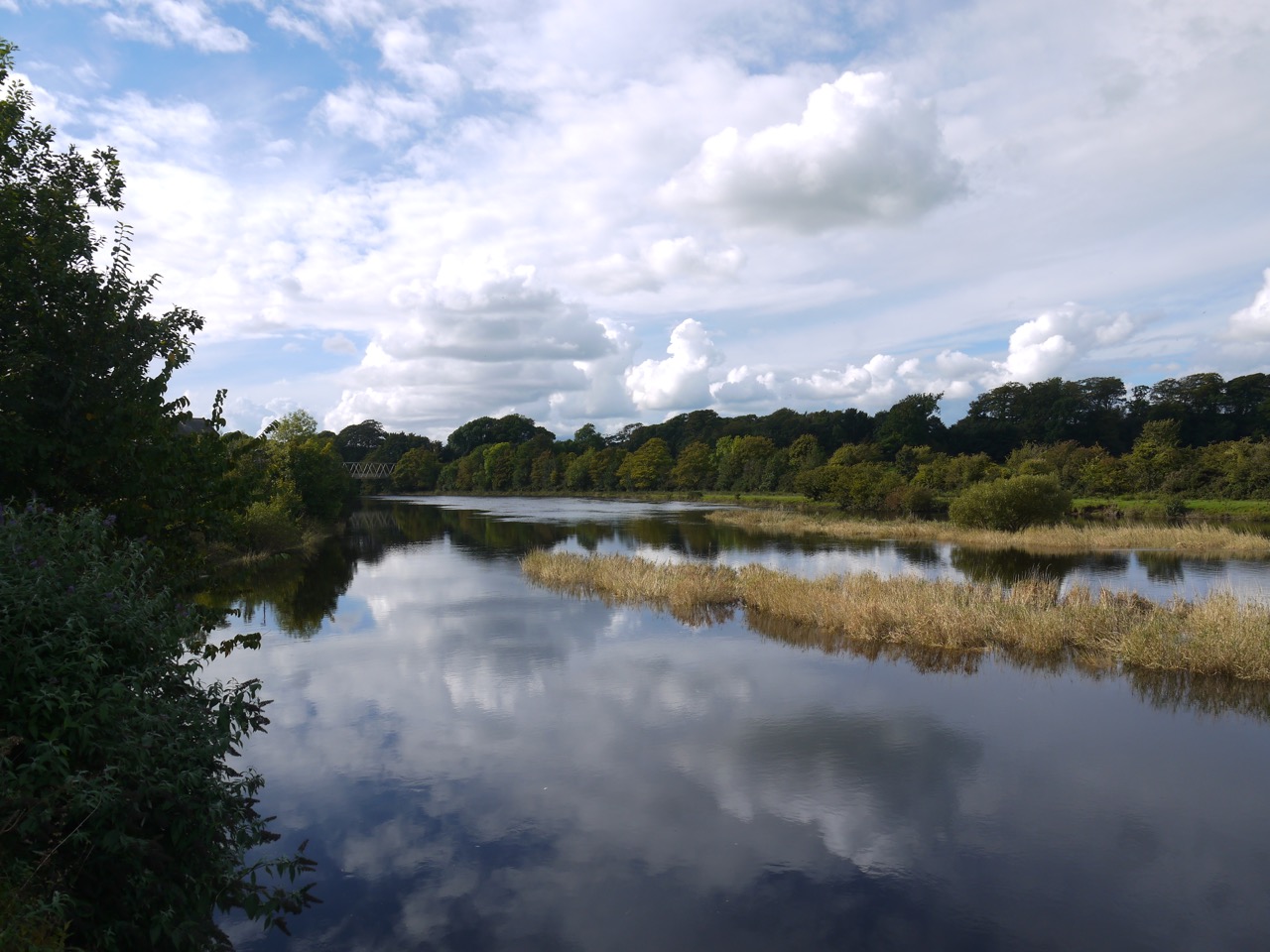 The fifth and final section of our 2016 stroll along the Annandale Way proved warmer and drier than expected though earlier rains had left some of the paths a little muddy. Despite being the beginning of October, it was still short sleeves weather and the rain, though we could see it over the Cumbrian Hills, didn’t reach us.

We began at Hoddam Castle and a short walk allowed us to rejoin the Annandale Way at the Mainholm footbridge crossing the River Annan by the totem pole. This whole section is really a riverside walk and we rarely strayed far from the river. 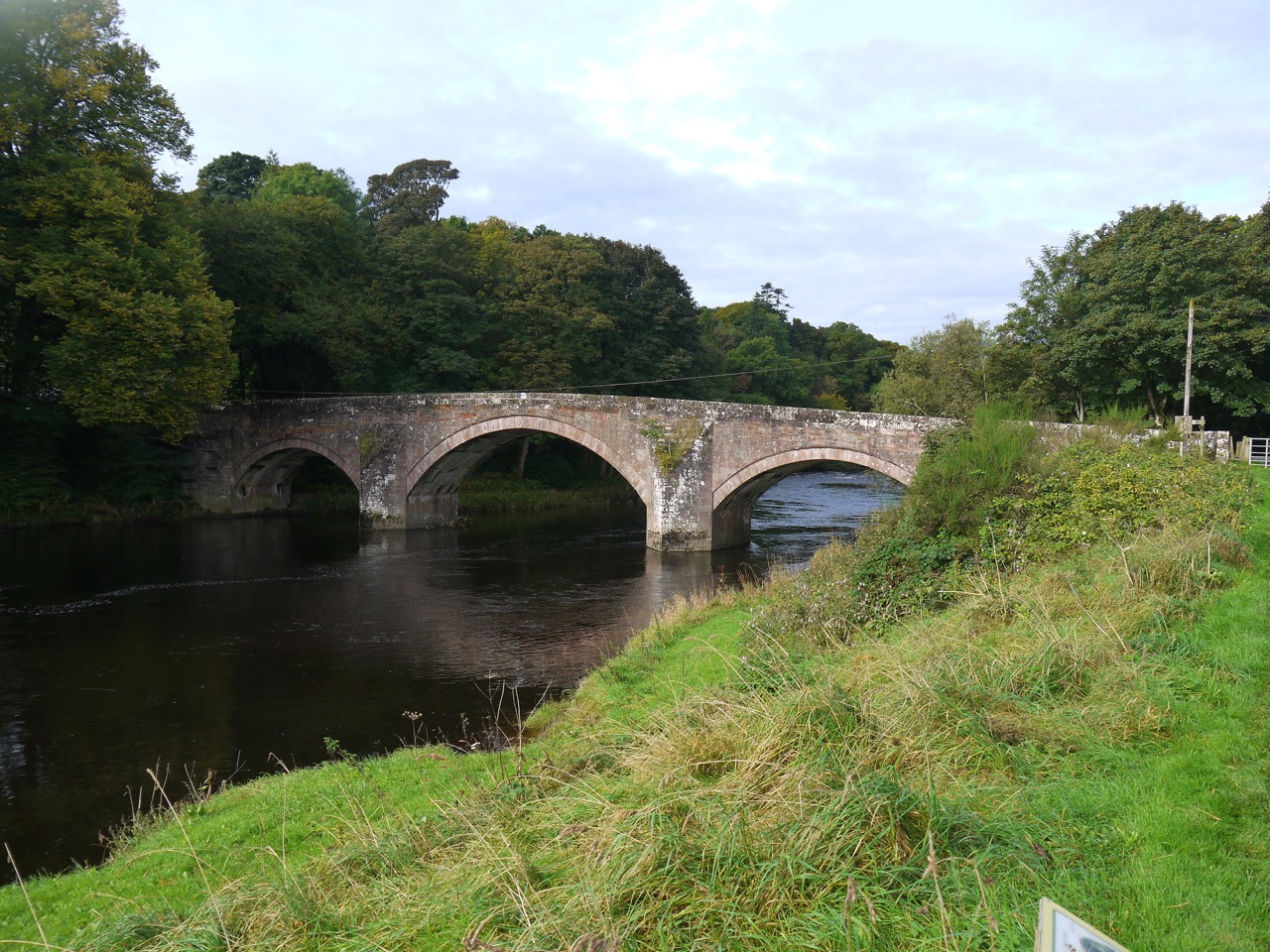 Much of the riverside is mature broadleaved woodland just beginning to show its Autumn colours. Where the trees did not hold sway there were sheep and cows but luckily where we saw bulls they were behind fences. An old cemetery stands beside the river not far from the road bridge at Hoddam. Most of the gravestones date from the eighteenth century, but an information board told us the original church here had been built in the 7th century by St Kentigern, a Bishop in the ancient Kingdom of Rheged, no less. Yew trees stand by the  graveyard, an association that probably predates Kentigern. Nothing remains of his church. 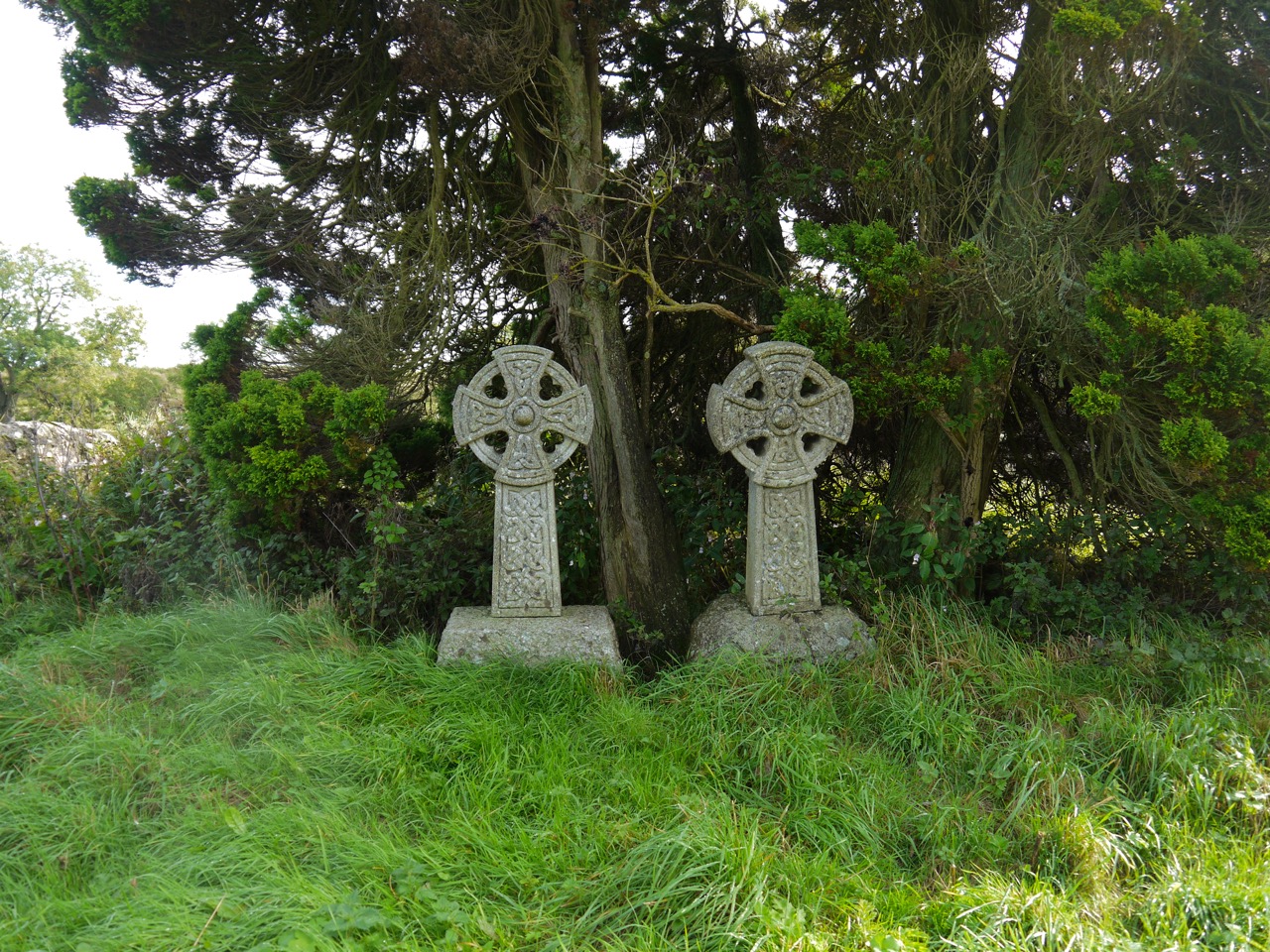 Our path proved to be surprisingly muddy and at times we had no option but to trudge on through the mud. Eddie would pounce into it, run out the other side, pause, then run back to jump in a again. But his forays into the river kept him reasonably clean. We just had to remember to turn away when he shook himself dry.

The Summer’s flowers had mostly had their day with only a few stragglers holding on. Only the Indian Balsam was in profusion and had me wondering what would have grown along these riverbanks before 1839 when it was introduced. Answers on a postcard please. 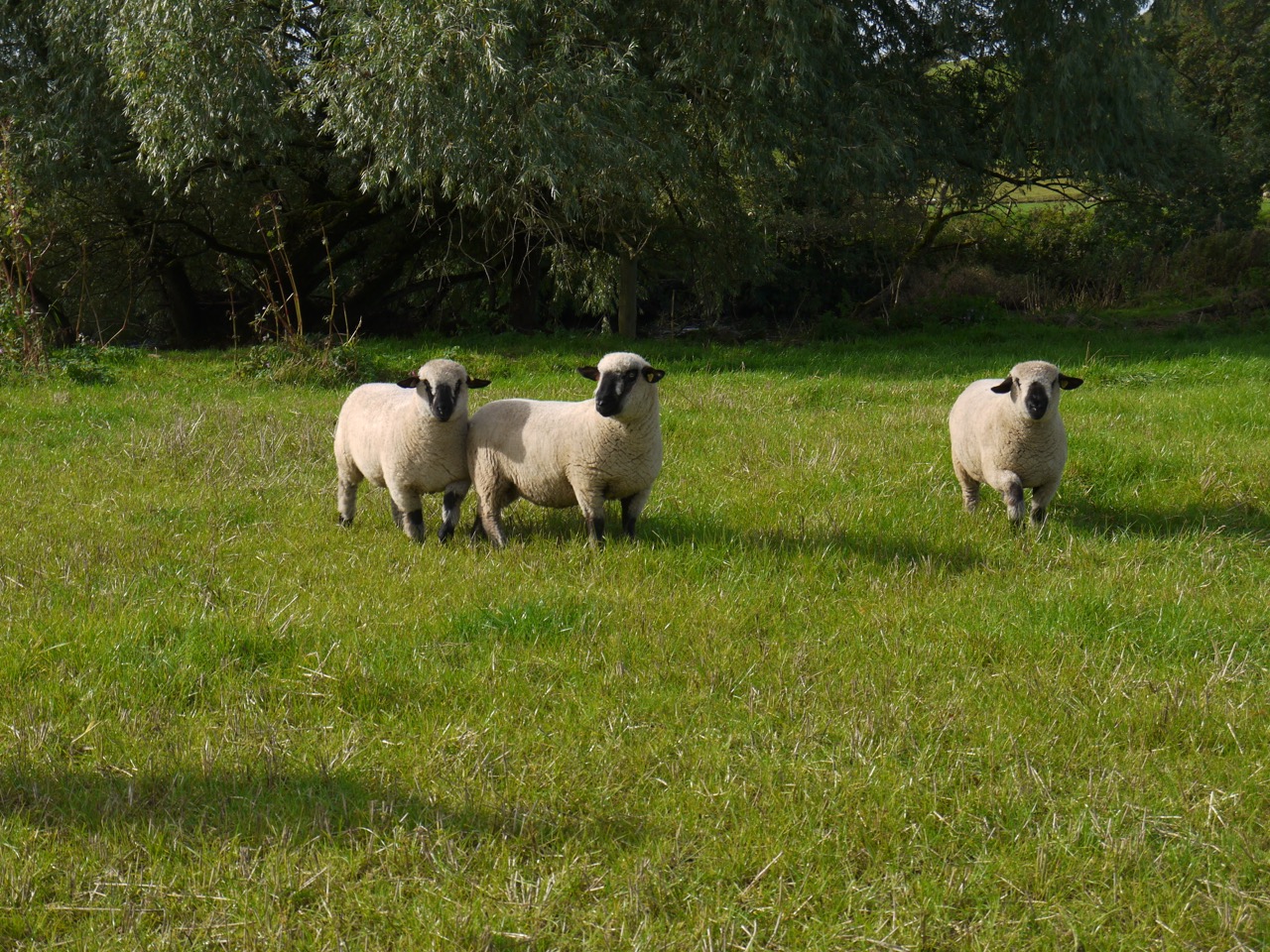 The day was not warm, at least at first, and dew remained on the grass. One field just before Brydekirk glinted in the sunlight looking as though it had a crop of daisies.

Hips, haws, berries, and apples on the trees reminded us that Autumn was here. I tasted some blackberries from a wild bush and was admonished by Audrey for calling them by their southern name rather than “bramble”, a proper northern monica in her opinion. That got me investigating. Woodlands.co.uk says “The fruit of the bramble is the blackberry, but in a strict botanical sense, the blackberry is not a berry. Each tiny juicy ‘blob’ on the blackberry represents a tiny fruit or drupelet, and there are many of them so it is an aggregate fruit . A drupe is a fruit that has a fleshy, outer part that surrounds a stone or seed. So, a drupelet is a tiny drupe.” A letter to the Telegraph suggested that the border between brambles and blackberries is just to the south of Northallerton. So I grew up in the land of Blackberries, yet still in t’north.

The River Annan looked beautiful in the sunlight, but the temperature dropped a little once we crossed back to the western bank. 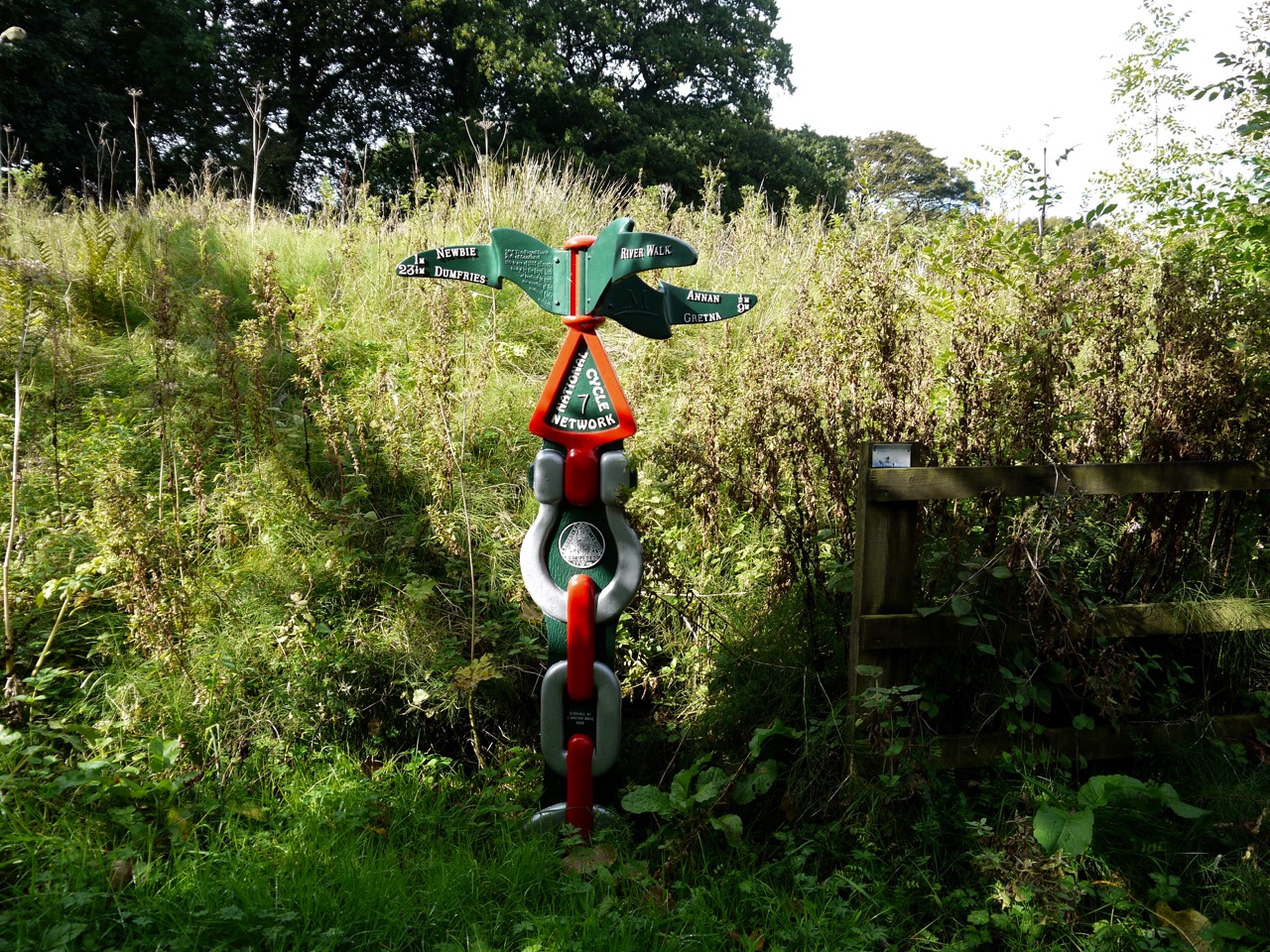 The final part of the walk took us to the Solway. There were more flowers along the walk here, as though summer had held on just a little longer. We noticed an unusual play with yellow flowers that Audrey subsequently identified as a Sea Radish. I thought the leaves looked similar to sage and took a leaf to small it. I can warn others that the sensation was like a grabbing nettle.

Our last few metres were beside a factory with impressive security, Johnson Matthey, which is a pharmaceuticals firm. The place looked like somewhere that Mission Impossible would be tasked with infiltrating. 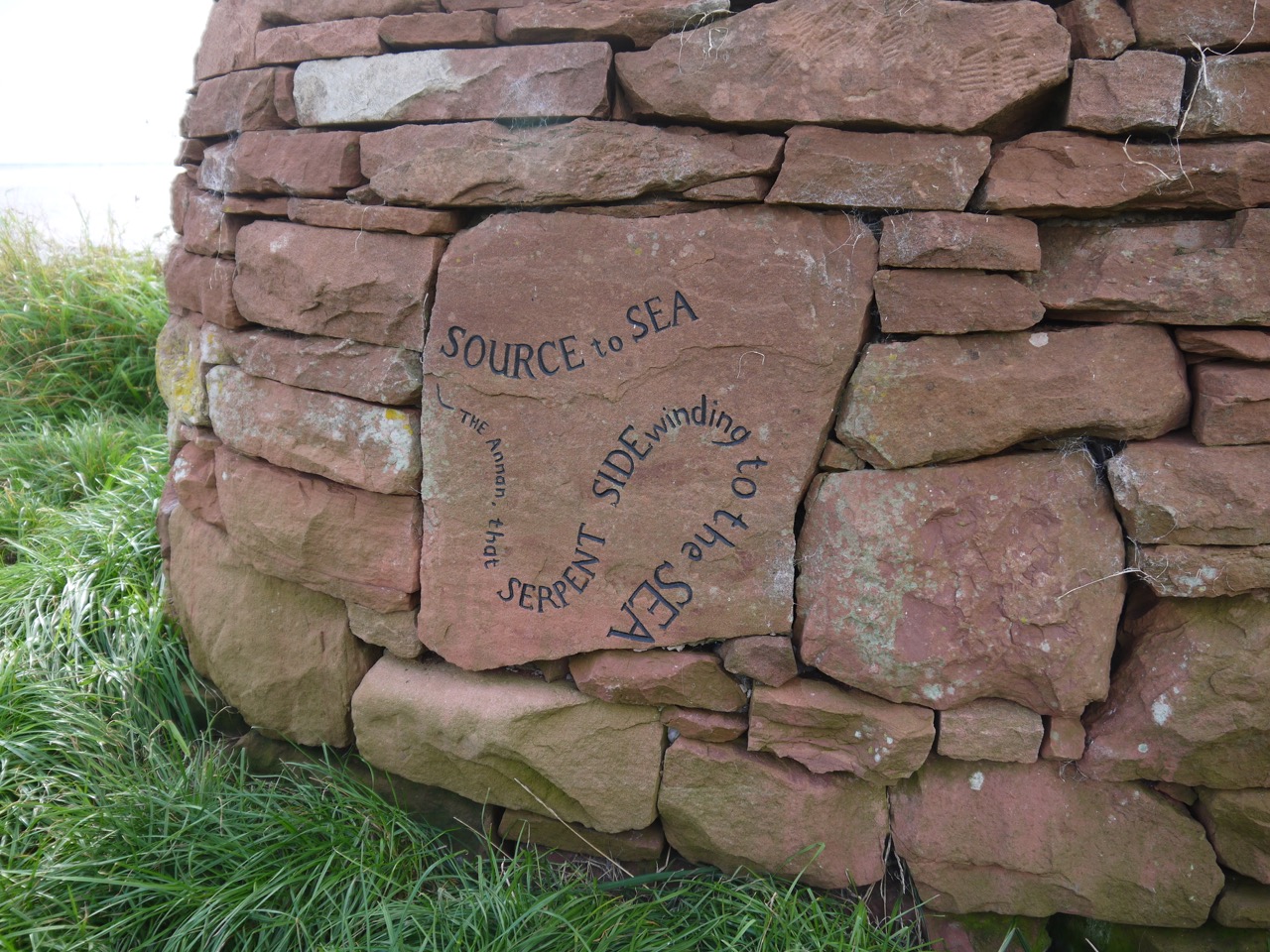 Cairn at the end

So 58 miles of Annandale Way had taken us from the uplands of the Moffat Hills to the Solway Coast, in rain and sunshine, through fields and moorlands, over hills, through woodland, along riverbanks,