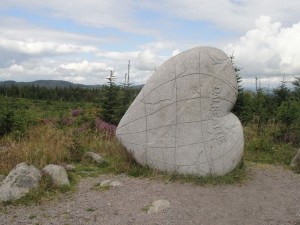 This was a brief stroll through Dalbeattie Forest in pleasant weather. We had previously walked the Dalbeattie to Colvend path (once in rain, once in sunshine) but this time started at the 7 Stanes car park.

The first ten minutes were the most challenging to navigate since there were quite a number of MTB routes. We choose to follow the trail markings for “main routes” which took us on a minor meander but got us to the right place. We were soon on forestry tracks wide enough to allow bikes past us easily and were able to follow the trail markers. I must be getting middle-aged eyes, because the tracks on the 1:25k map were merging into the contours. My compass has a small magnifying area and I would have needed it if the light had been bad. I realise I have now reached a certain age (at which I can grumble that printing is too small).

Unfortunately there wasn’t much in the way of  a view at first but there were trees, butterflies, wild flowers and the blackest water to see. The MTB trail-markers were helpful in pointing out to us that we were ascending. Having said that, there wasn’t much ascent. We reached the highest point of our walk (119m) after 2.5 miles, at the Heart Cleft Stane. This is one of the 7 Stanes, made from local granite, carved in the shape of a heart (lover’s rather than anatomical) with a map of the world carved into it. It stands on Moyle Hill in an area cleared of trees, or perhaps never afforested, so it was the first chance to see the surrounding wee hills such as Screel and Maidenpap.

The MTB track headed up over Moyle Hill but we backtracked the 25m to the forestry track and continued on. This was a path much less trodden which reminded me of the disused railway to Skerrow Halt, though perhaps not yet as wild as that. There was even heather growing on the path. We rejoined the MTB track after a furlong. That sounds better than an eighth of a mile doesn’t it? A narrow path took us down to the bottom of the Slab, a 15m steep granite slab which attracts mountain-bikers. The photos don’t do it justice. There is plenty of evidence of its use on YouTube.

Once back on the forestry tracks we headed down to briefly join the “brown” way-marked path that goes from Dalbeattie to Colvend. I had a vague memory of seeing the path down from here to the A710 and hoped I would be able to find it. Luckily it was very obvious and clearly signed. There isn’t a path marked on the OS map from the A710 into Kippford forest but there is a well maintained path on the ground. This wound around between two minor hills in Kippford forest and took us to the foot of The Mote of Mark.

The Mote of Mark, is a small hillock, standing 45m above the sea-shore. It was once the site of a fort or settlement dating back to the 5th century and was clearly quite a cosmopolitan place since excavations have found evidence of metal working on site and various imported goods: iron from the Lakes; jet from York; pottery from Bordeaux and Rhineland glass.

I can see why this prominence would be used as a fort since it gives excellent views over the Rough Firth. Screel and Bengairn are seen to the north, Barcloy hill to the south, and across the firth, the Almorness peninsula (which defeated us on a previous walk) and the two islands, Hestan and Rough. Both can be reached on causeways at low tide but we reached Rockcliffe not long after high tide.