Deep in the forest 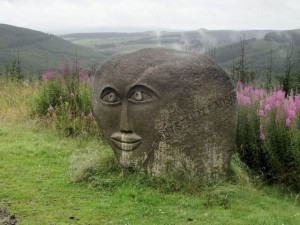 Ae Forest in search of the 7 Stanes.

The weather was not the thundery heavy rain forecast, just a persistent drizzle (smirr). The route took us from the main car-park along a track that looked to have been renovated recently, past fields of sheep (to the right) and cattle (to the left), separated from the road by large rocks. This took us to the overflow car park which is marked on the OS map.

I had planned to walk anti-clockwise but missed the turn uphill so switched to clockwise, which turned out I think to be the better direction. Had we gone the way planned we would have missed the carved wooden seats near the car park. These have several carvings, some of which I only noticed when looking at my photos. I like the fact that they have carved JCBs and log lorries as well as the usual animals and plants.

We took the forest track that follows the Water of Ae northwards. This track steadily climbed and drifted away from the river before dropping back down the hill close to the Craigshiels Outdoor Centre.

After the bridge we rejoined the red cycle route and the path began to climb slightly more steeply. Our first 4.5 miles was all uphill, except for a brief dip down to Craigshiels, so despite waterproofs protecting me from external moisture I was damp from the inside.

Wee Queensberry with its two summits was visible ahead of us as we walked up from Craigshiels, but Queensberry itself was hidden in cloud. Twenty minutes later the cloud had risen a little and Queensberry was revealed except for its summit. There were wisps of cloud across the valley, below us, but luckily our route escaped any cloud.

Once up on the higher paths we saw some other folk braving the weather, a couple of horse-riders and some mountain bikers. I presume it will be much busier in good weather. (Insert your own insult regarding fair weather walkers/riders/etc.).

Eventually we reached the Talking Head Stane, one of the 7Stanes. I had seen a photograph of this before but had been unsure if we were looking for a small rock or massive boulder. It fact it is about the height of a man. I’ve read that it is 6ft 4in x 4ft 6in, but suspect this isn’t accurate. The 7stanes website says it weighs 1.5 tons and is sculpted from a glacial granite boulder. The stone has a rather forbidding face looking eastwards and these words, from Deep in the Forest, by Hans Børli, inscribed around the sides and back.

From the talking head stane the views could I think be good but today were limited by cloud and poor visibility. I wonder, as well if the stone might look less sinister when not wet. A reason to come again in dry weather, perhaps?

From here the way back was downhill, initially on a wide bridleway and then down the orange cycle route, The Shredder. This has an uphill-push path for MTBs and we used this to get back down. We did not see any any riders on this section. It is steep enough that I wouldn’t relish pushing a bike up it.

If the MTB routes were busy it would be possible to avoid the Shredder with only a slightly longer walk.

Though we didn’t climb any hills on this walk, it was a higher climb than Screel had been, and felt like it.

Share this...
This entry was posted in Dumfries & Galloway and tagged 7stanes, Paths. Bookmark the permalink.