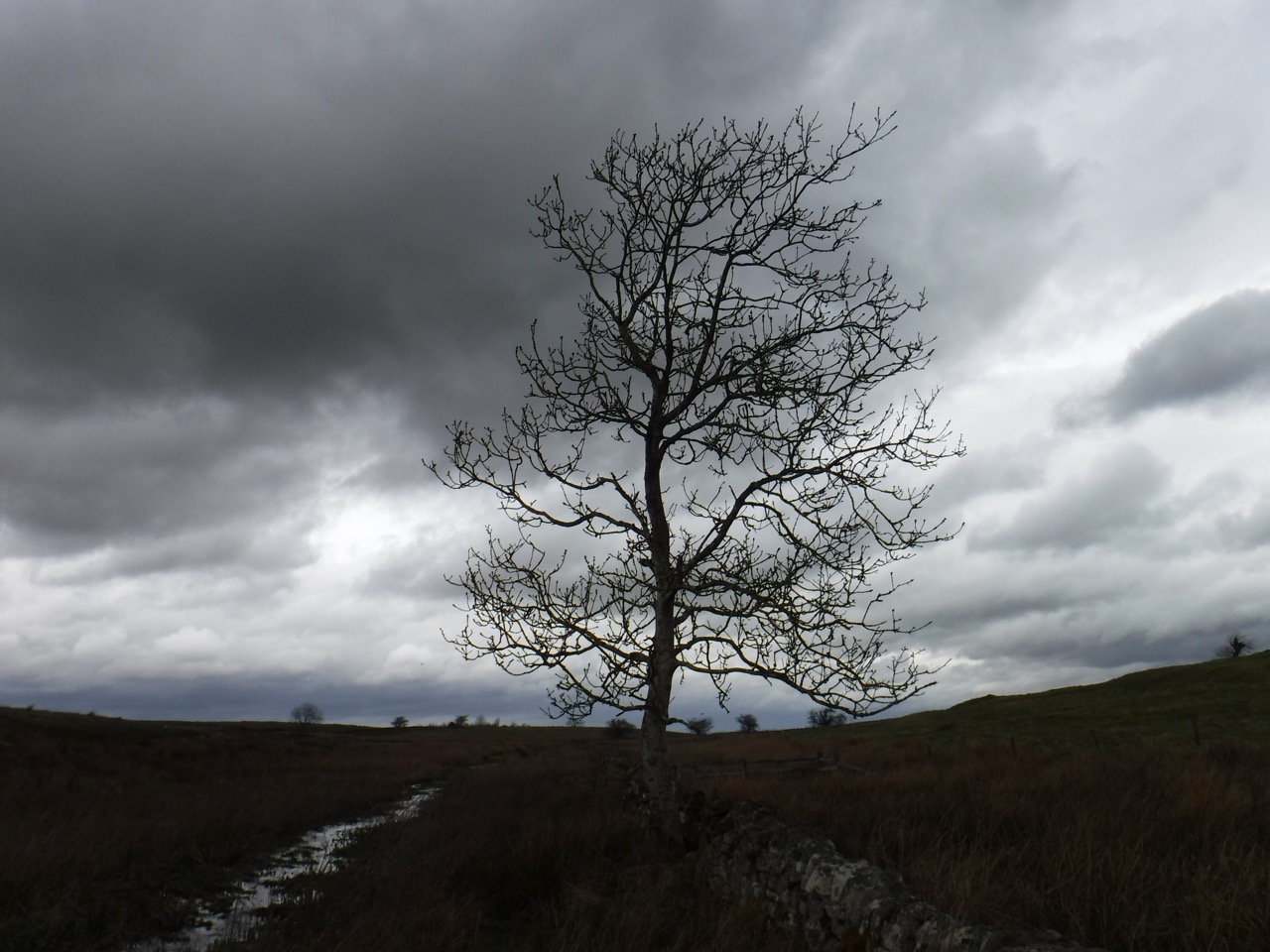 Better weather. The last two sections we walked into a strong headwind, first with snow and then with rain. Today the wind was at our backs and though rain and despite we walking beneath ominously grey cloud, the rain held off except for short light showers.

Spring was here. There were banks of celandine by the roadside, daffodils in various states of flower, and what will probably be the last snowdrops we see this year.

We parked at Chesters Fort (Cilurnum) and took bus number AD122 to Housesteads. I like taking public transport between sections and this was particularly enjoyable since much of the trail was visible from the bus. The air felt ready for rain and we had seen some walkers stopped, putting on waterproofs, as we drove along the B6318, so we walked in waterproofs.

Housesteads car park is about a kilometre away from and 40-50m below the Hadrian’s Wall trail, so we had a bit of a warm up right at the start. Vercovicium was obviously a sizeable fort. It was built in AD 124, the Wall itself was begun in AD 122 (hence the Hadrian’s Wall bus number). As soon as we reached the ridge beside the fort we knew we were in for better visibility than our last outing since we could see Broomlee Lough. 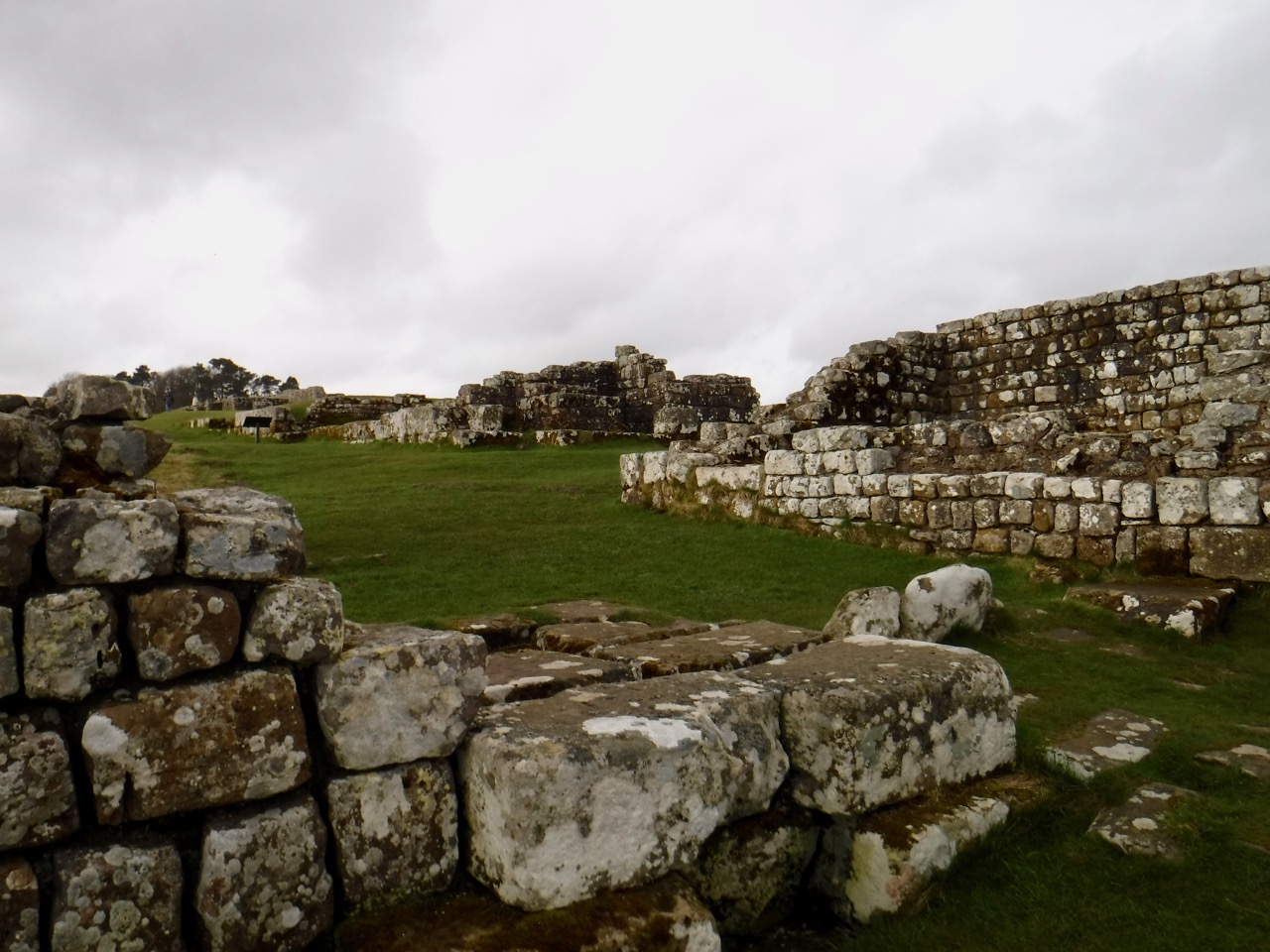 From the Fort we had a slight descent, crossing Knag Burn into a muddy quagmire and then made our way to the far side of the wall to climb beside it up Kennel Crags. The path beside the wall then seemed to peter out. I looked across what was now just a stone dyke rathe than Hadrian’s Wall and saw a gate through another wall on the other side. A gate with an acorn sign. We had crossed outside the wall when we should have stayed to its south. So we could either go back down, cross the quagmire and climb back up, or….

We clambered over the wall, Audrey pulling her shoulder as she did so. So I took javelin duty for the rest of the day. 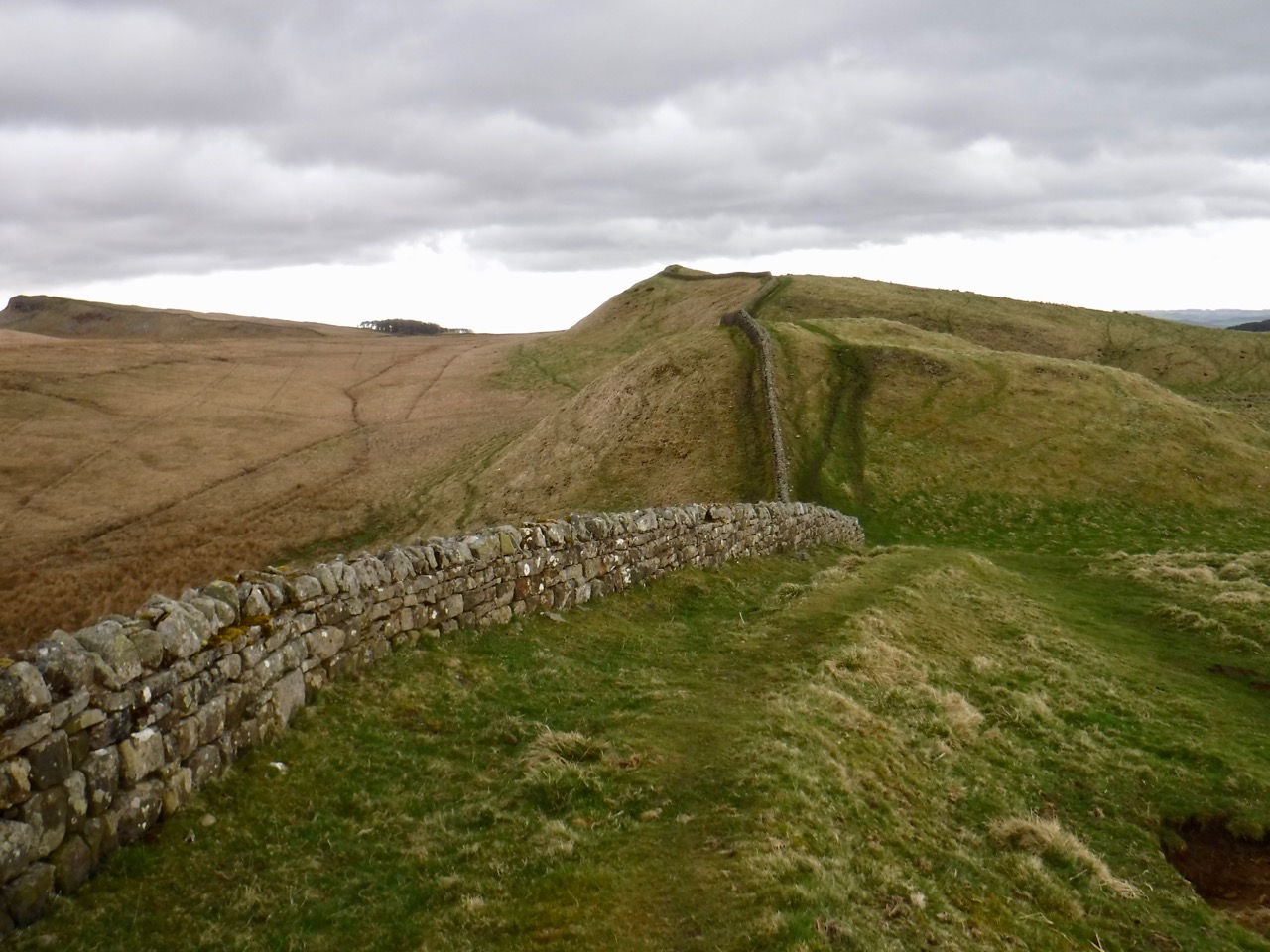 We were now on the ridge proper and strode out over Clew Hill and King’s Hill, with a flock of sheep watching us find our way up the latter. The ancient wall is no longer here but a dyke, no doubt made up of stones from the original wall runs along the whole ridgeline from Hosesteads until just short of the trig on Sewingshields Crags. Then the original wall reappears. We met the wind once we were on Sewingshields but it was at our back and the few spots of rain were easily ignored. We passed a gate marked with a sign “King’s Wicket” where the wall and path turn north to climb to Sewingshields and this had me wondering what a wicket is. I wish now I had taken a photo of the gate rather than just the sign, because a wicket is a gate. 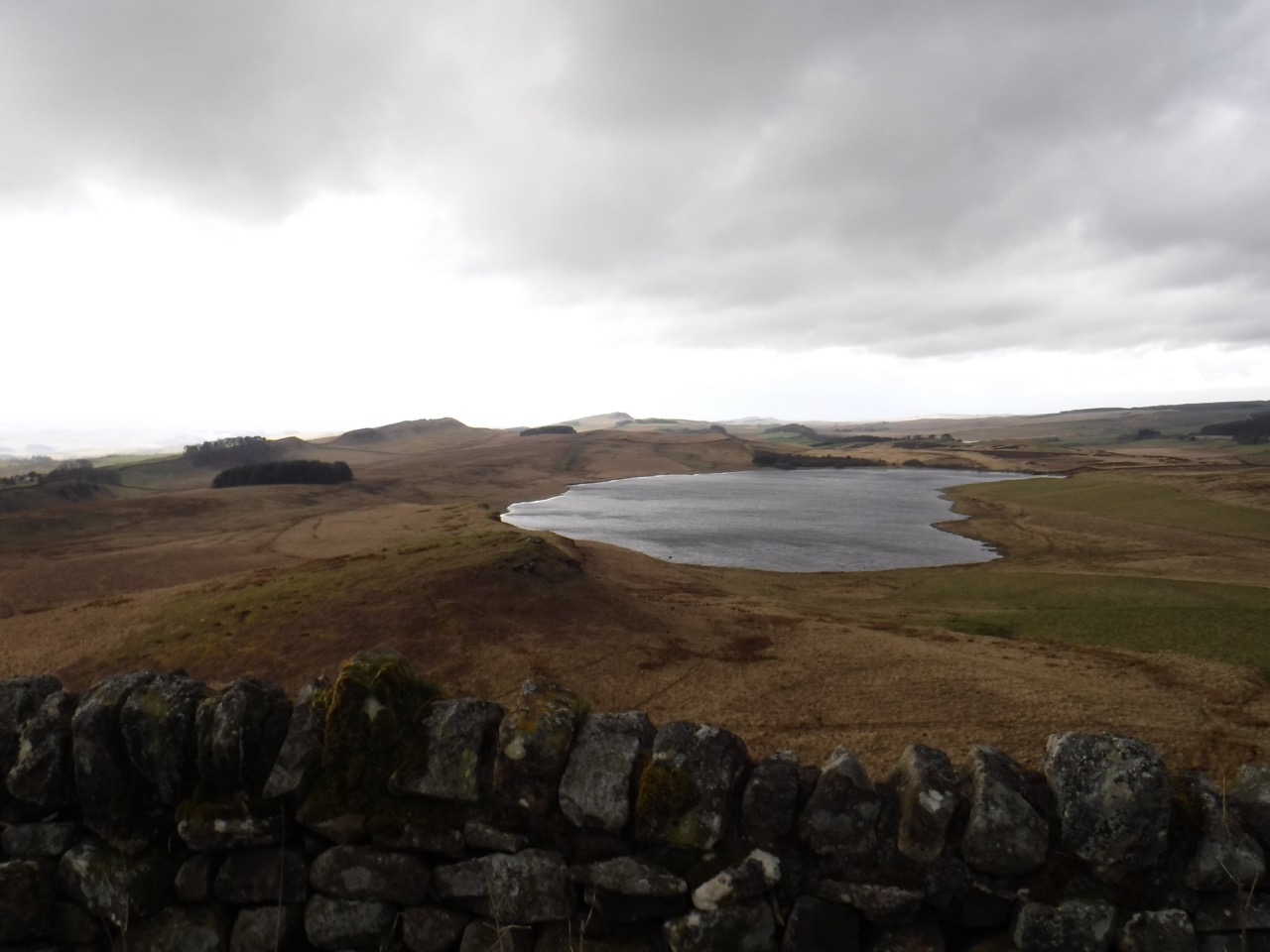 Sewingshields has nothing to do with sewing or shields, but derives from Sigewine’s Shiel. A shiel is a temporary shelter, perhaps used by a shepherd and Sigewine is an Anglo-Saxon name. “The Place Names of Northumberland and Durham” gives a variety of previous spellings: 1279 Swyinscheles, Sywinescheles ; 1286 Schiwynscheles, Siwinshell ; 1296 Sewynsheles ; 1407 Swynscheleys ; 1479 Sewyngshelez ; 1610 Sewenshield ; 1663 Sueingsheels ; 1711 Sewen Shields, which show its evolution. Presumably the crags and the wood take their name from the nearby farm. 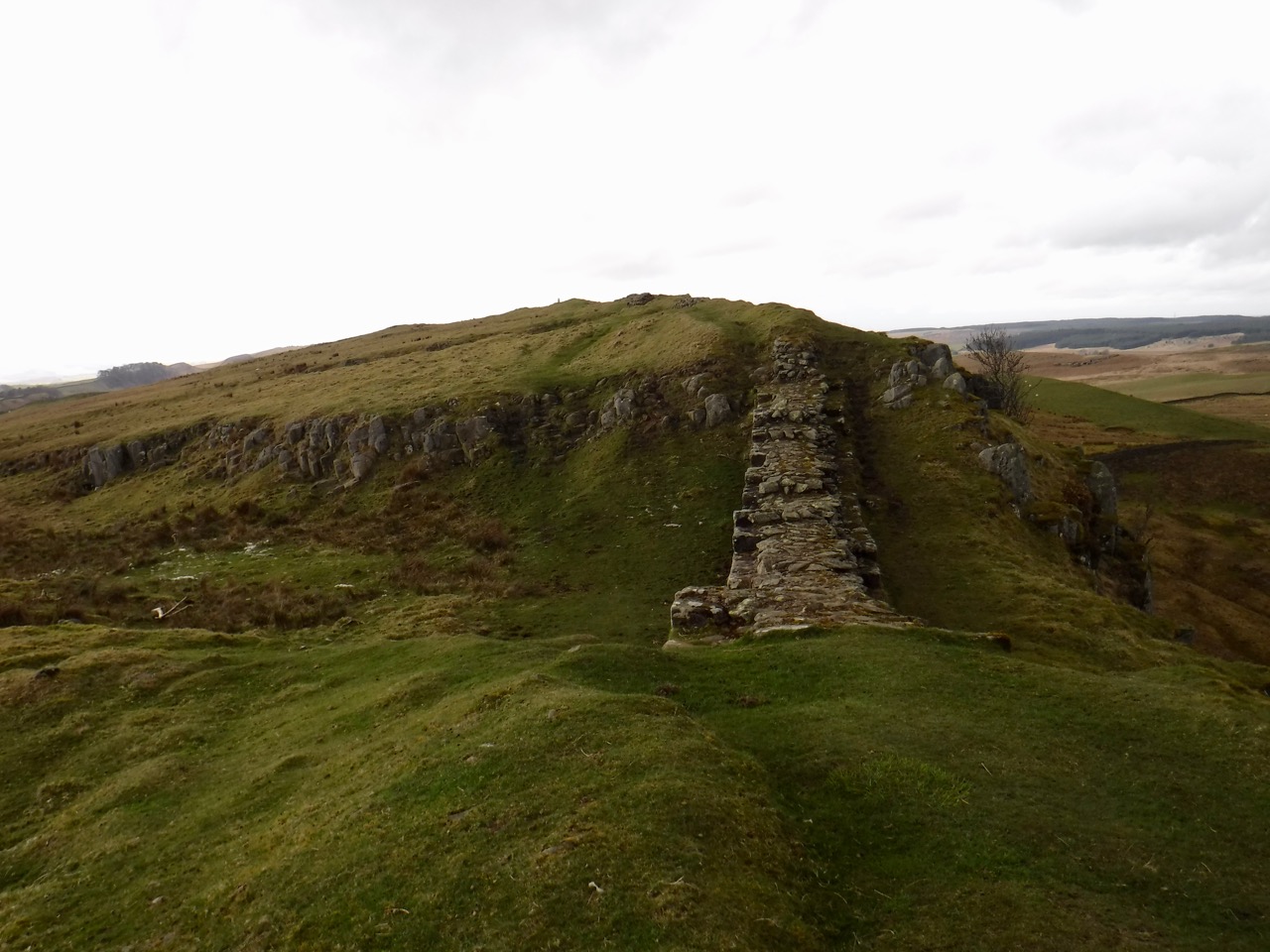 There is a small burial cist beside the wall up on the crags, a little east of Milecastle 35. This is thought to be post-Roman. The trail then passes through Sewingshields wood which is a sparse plantation of Scot’s Pine that wouldn’t offer much shelter from the elements. The land then flattens out and the trail crosses a boggy moorland, but the path itself raised, presumably on the walls foundations, are only superficially muddy in places. Grindon Turret (34A) has substantial remaining foundations but Milecastle 34 itself is gone, though its position is marked by a walled stand of trees. 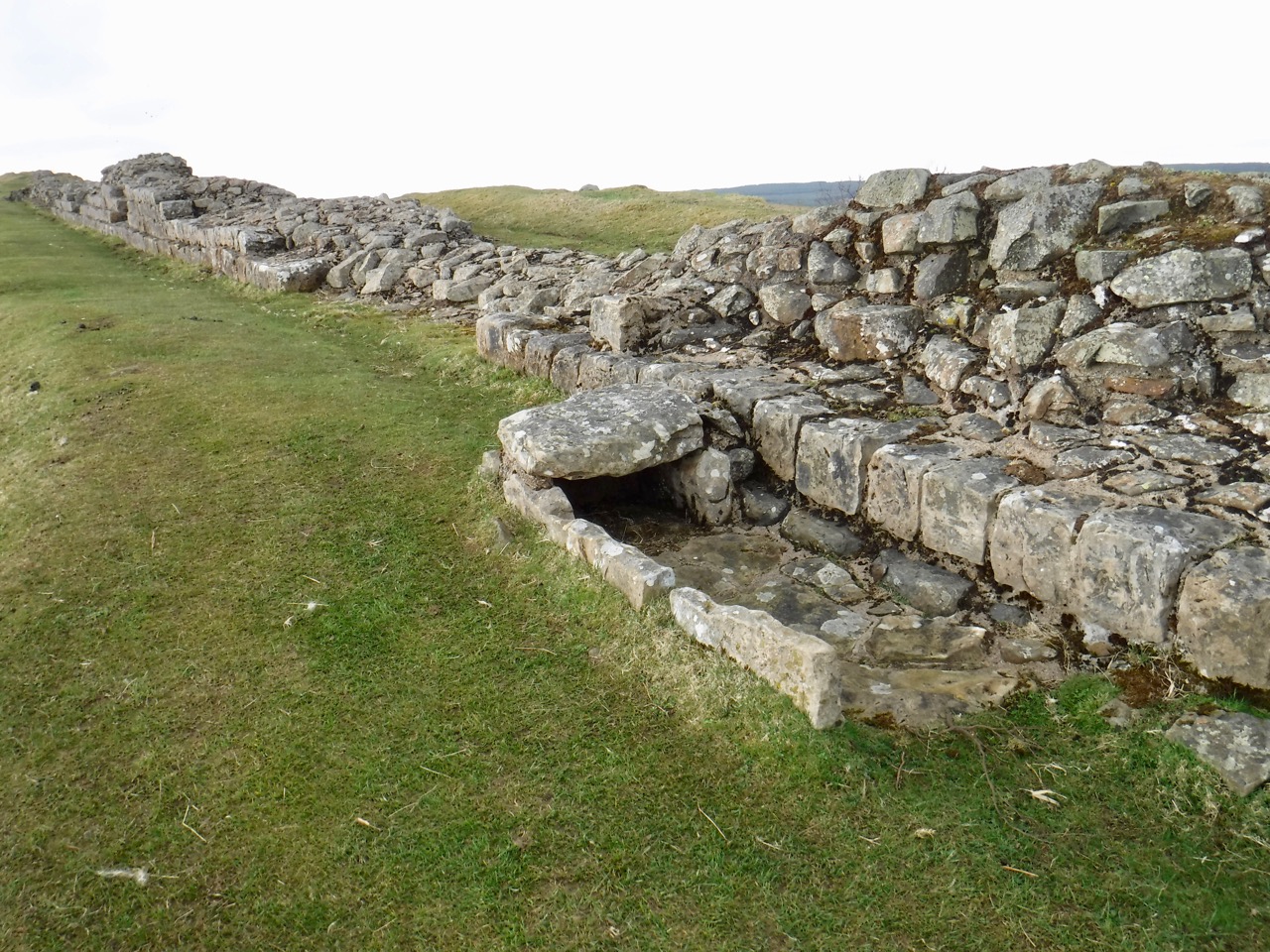 I had wondered about stopping in the lee of theses walls for elevenses, but someone was having a pee in the woods so we walked on and sat in the open at the remains of the next turret. As we sat a gentle rain started to fall. But we stopped for a rest anyway. Since I was not driving I had brought along a wee dram, choosing a lightly peated whisky which I thought fitted the terrain, (Glenglassaugh Torfa). Hip flask and collapsible cup used together for the first time. It is important to keep in mind that the cup will collapse if put down. 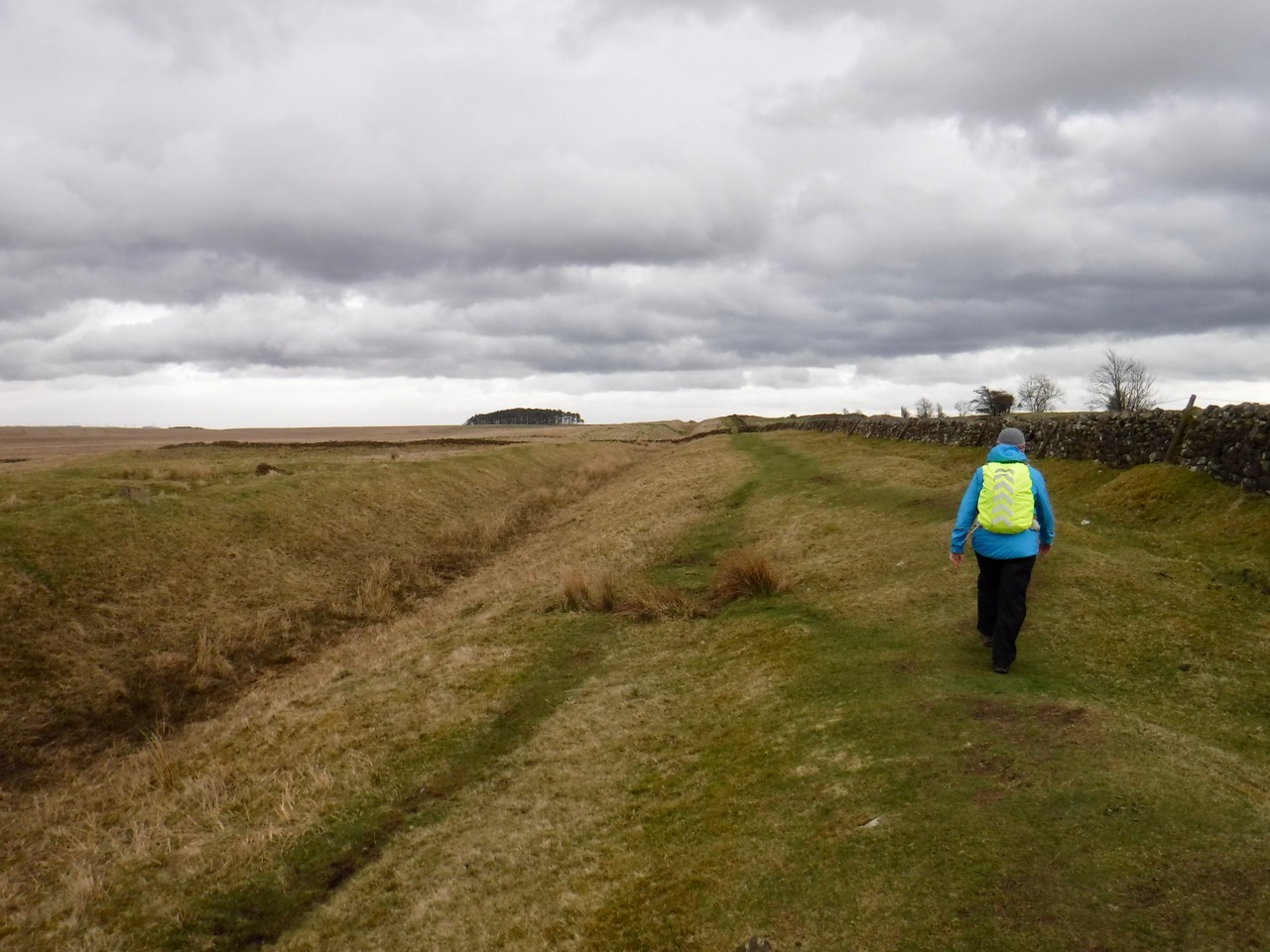 Shield on the Wall

It was then a long straight walk in one-point perspective. We passed the site of Milecastle 33 which had some of the Wall remaining but otherwise existed only as a small raised area of ground. Shield on the Wall Dam (a small lake) was on our right. 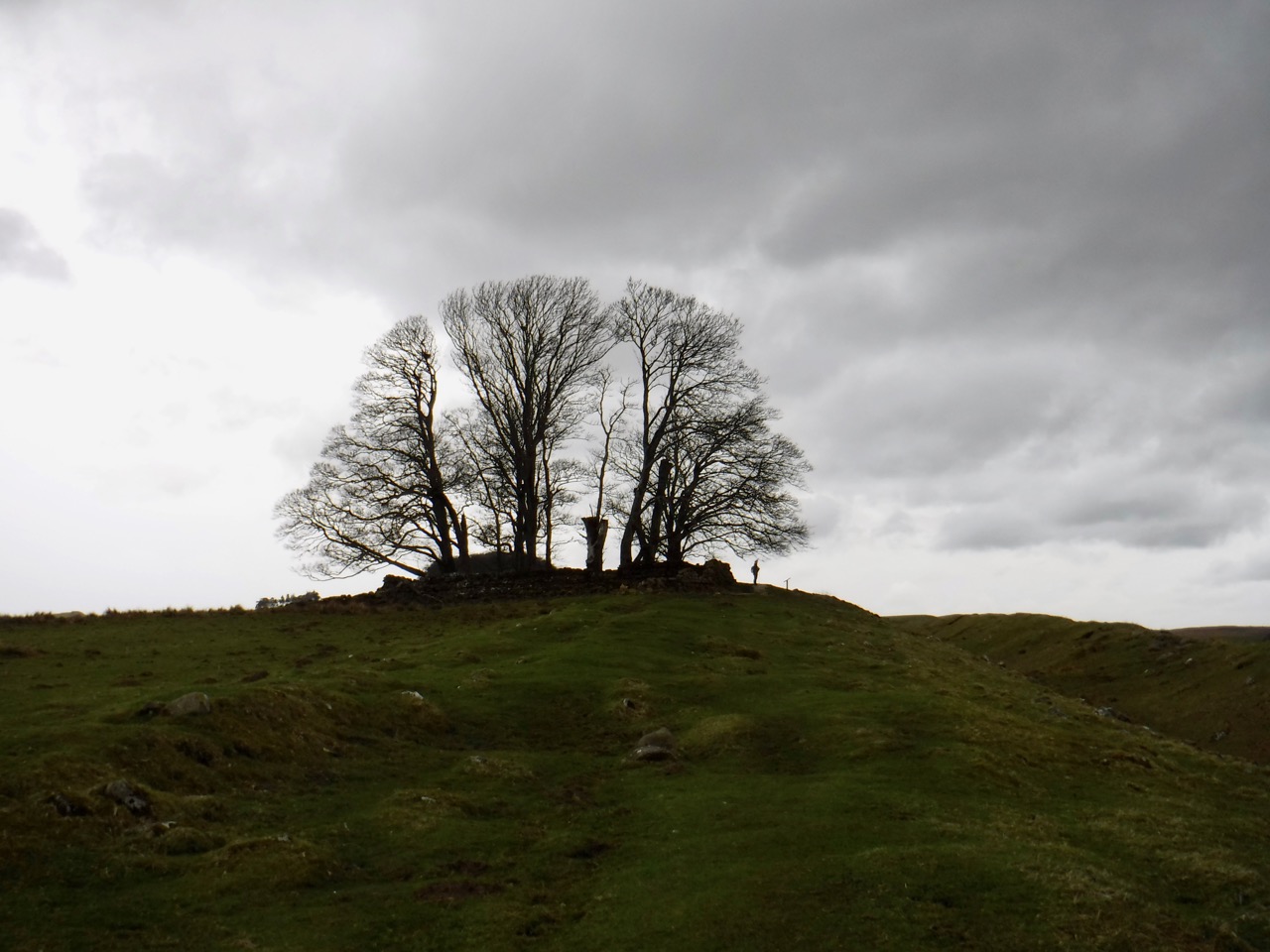 I wondered about stopping for lunch near Carraw, since the buildings and trees there might offer some shelter from the wind, but the path beside the farm, though paved, was under semi-liquid mud so we pressed on intending to stop at Brocolitia Fort. That would mean no shelter but the car park ought at least to give us firm ground to sit on.

Somewhere before Carraw my right hip had started to ache and I was hoping for a rest in the near future. But it wasn’t far to go. Down a gentle slope. But the ground grew softer and muddier. The trail crosses the B6318 and leads up to Brocolitia Fort via the Mithraeum. What I wasn’t expecting was Meggie’s Dene Burn/Coventina’s Well.  The burn here arises at Coventina’s Well and takes its name from Old Meg a witch who was burned at the stake, and buried in the Dene with a stake through her heart. No half measures in those days. 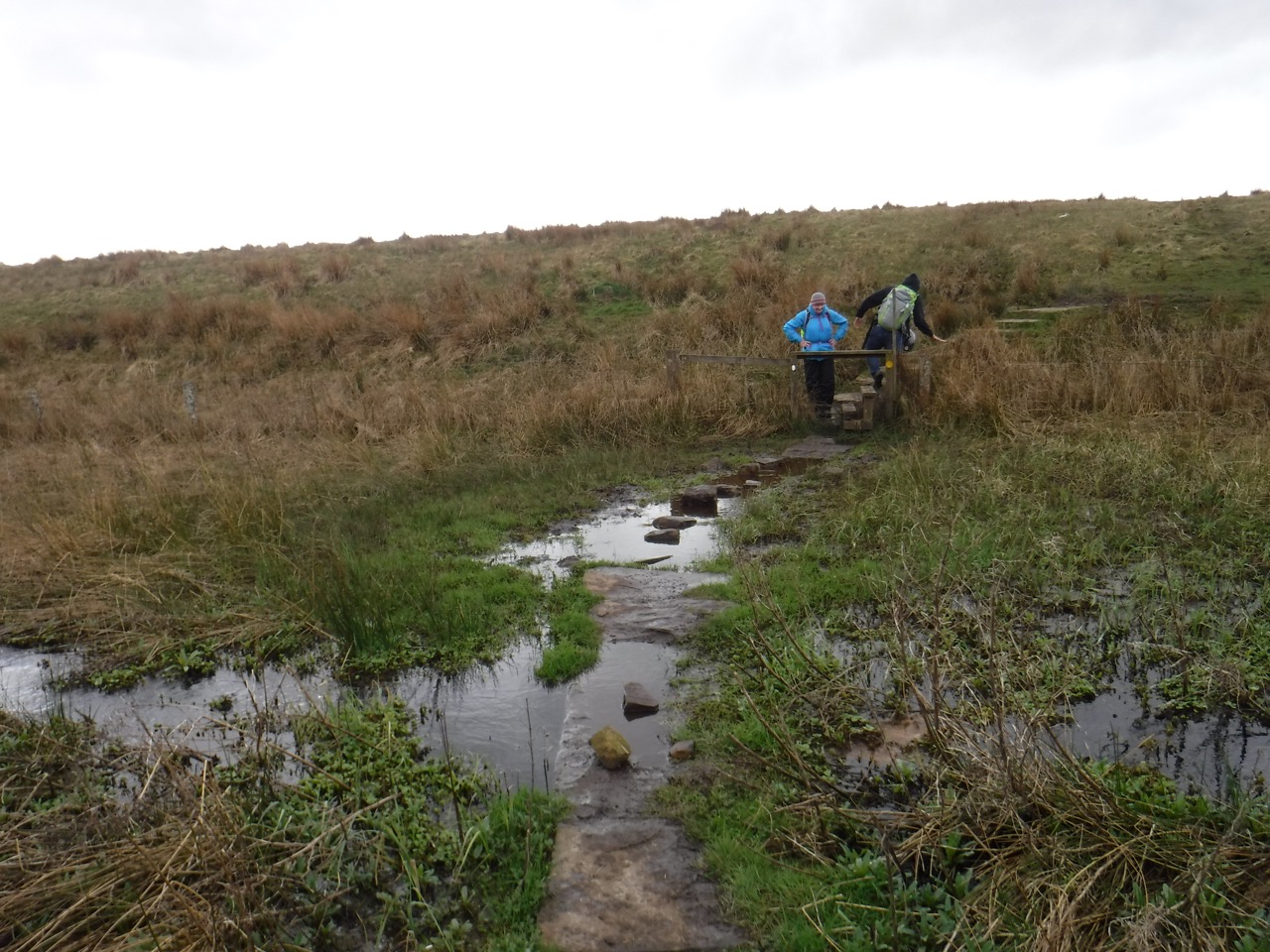 This was a waterlogged area. No, that doesn’t capture it, submerged is closer to the mark. Water stood between us and the Mithraeum. Stepping stones looked to have been flung into place rather than placed with thought. Another walker stood on the opposite side surveying the same problem. “You first” he shouted.

So I went for it. My undoing was the largest stone, close to the middle. It rocked. And I don’t mean it had flair akin to a rockstar, I mean it was unstable. As my left foot landed, the stone rotated forwards. the next stone was to my left, so without a pirouette I wasn’t going to get a foot there.  So I launched as far to the right as I could, the water there looking shallower. then back to rocks. On the plus side I remained vertical and still had one dry foot. The guy on the other side, dressed in walking gear but wearing what appeared to be plimsolls, proved more agile. But to be fair he was probably half my age. 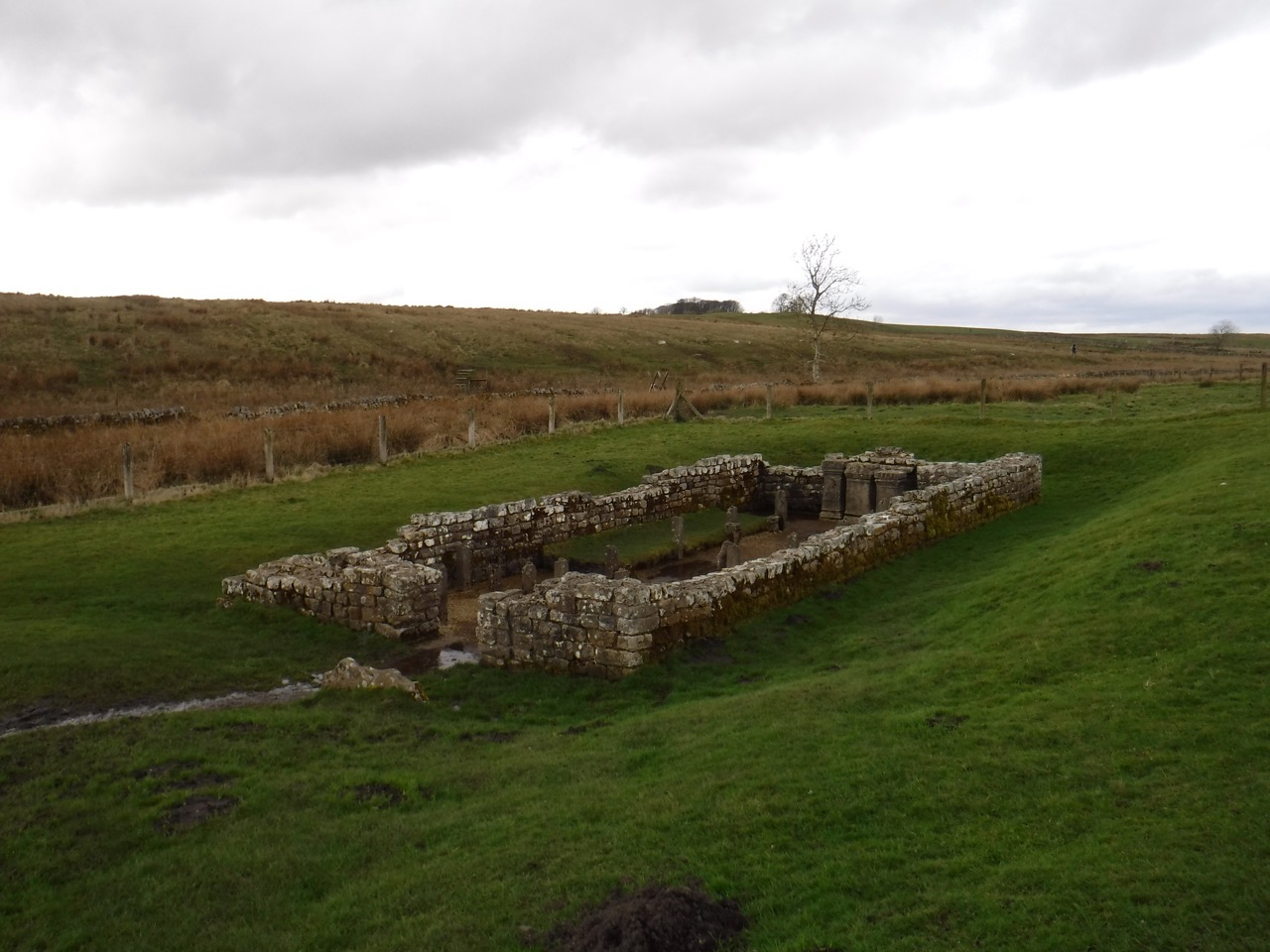 The Mithraeum was just a stone’s throw away. I wondered why a temple had been built in a waterlogged hollow, since most churches and temples are on high ground. Temples to Mithras, however, are usually in caves or constructed to appear like caves, and running water was a part to play in the devotions. This temple was only found in 1949. Another temple, to Coventina had also stood nearby, but no longer exists. 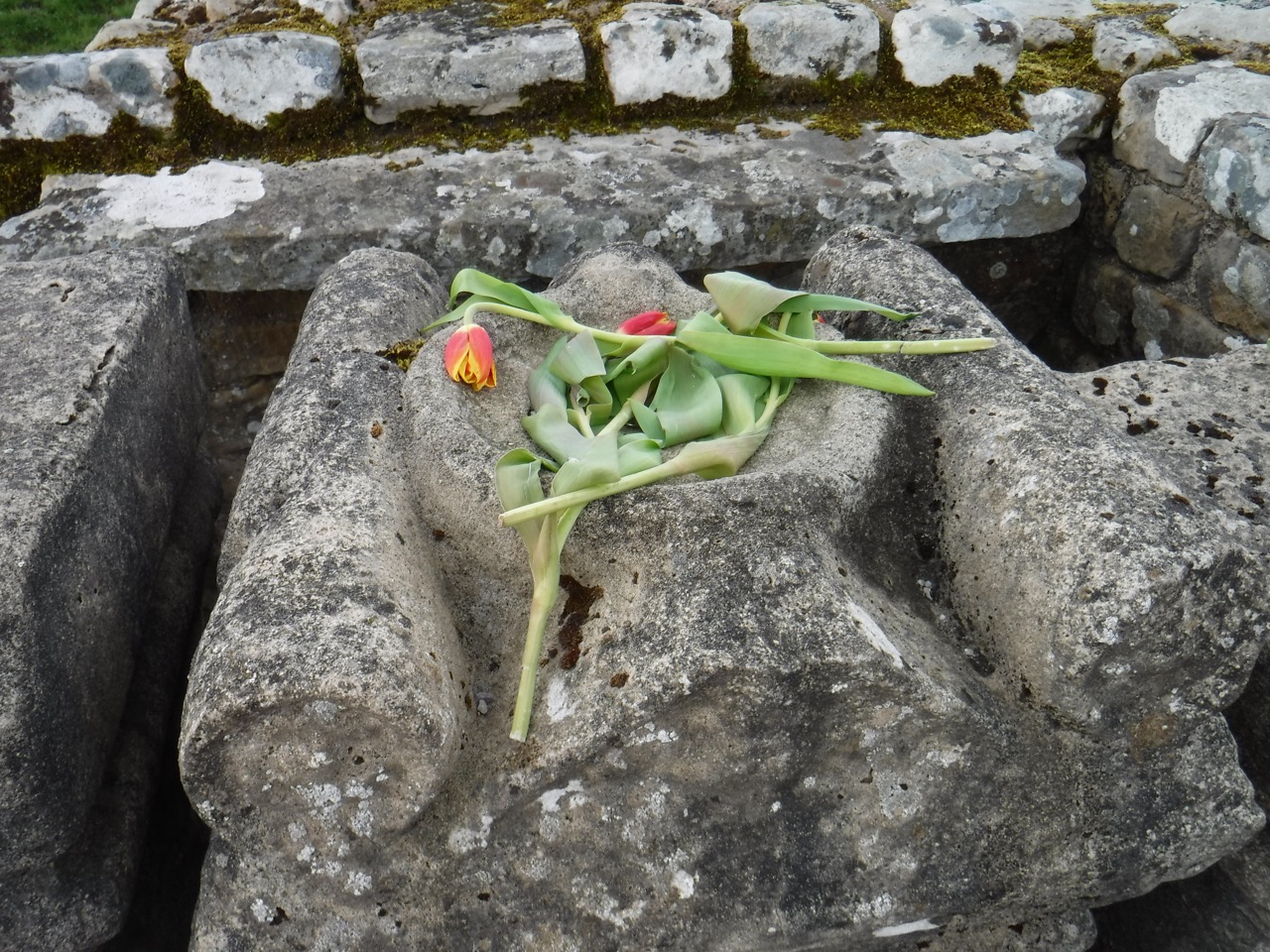 Tulips on the Altar

Mithras was originally a Persian God of light and truth, and in the Roman pantheon became associated with the battle between good and evil, bravery and manliness so was often worshipped by Roman soldiers.

The altar stones in the temple had tulips laid upon them. We have sat in the temple for lunch but it seemed a little disrespectful, so we plodded up over the mounds of Brocolitia fort to a car park surrounded by hal-metre high walls offering the options of firm seating but no shelter, sitting on the ground with a bit of shelter, or the one we chose, sitting on concrete steps with partial shelter. Sandwiches, chocolate, coffee, whisky, and rest until we started to cool down too much. 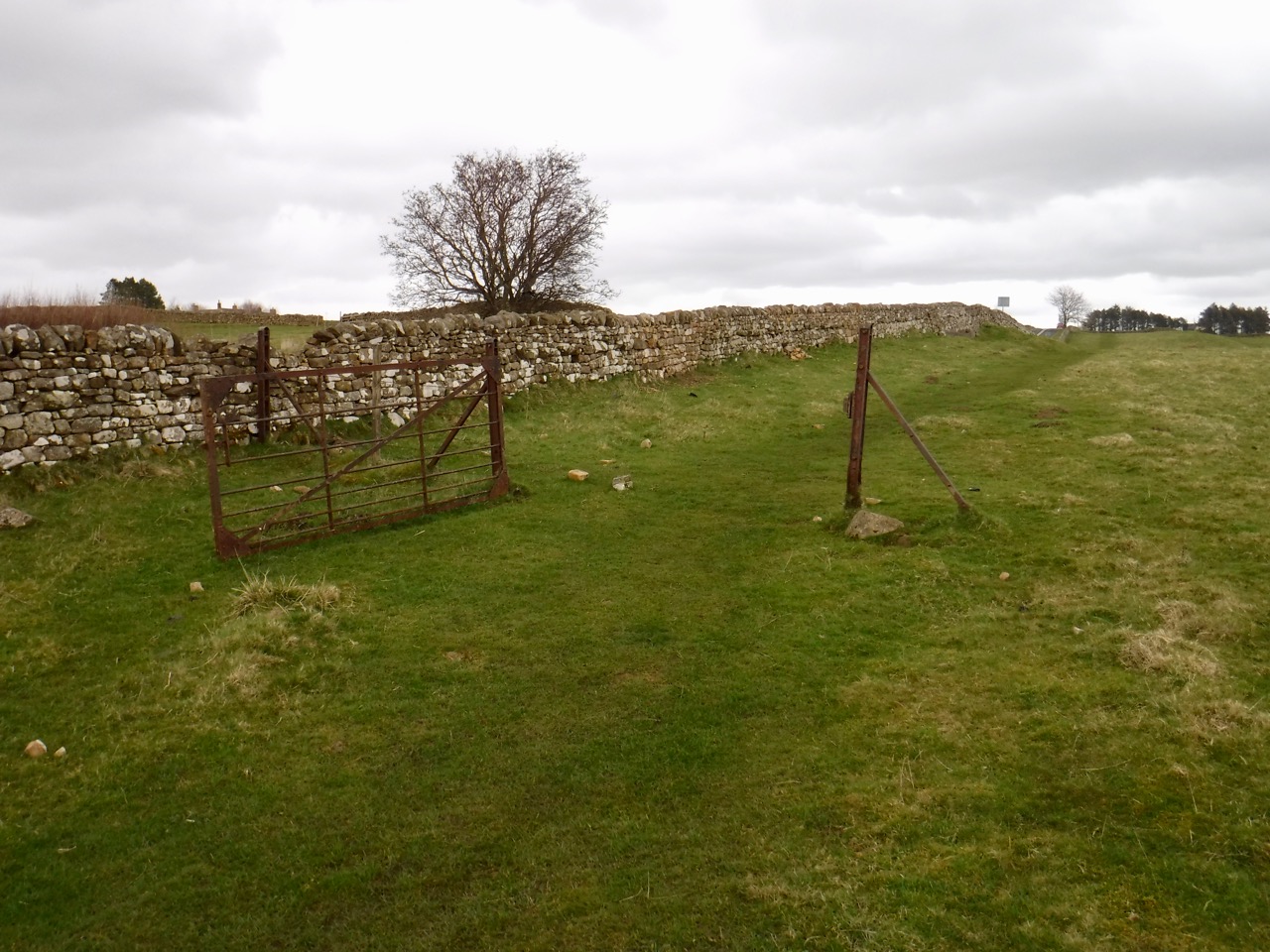 a gate without a fence

Beyond Brocolitia there was one of my favourite sights, a gate without a fence. Not quite as impressive as the locked gate without a fence we saw on the Southern Upland Way. We had another long walk along a mound stretching to the horizon at Limestone Corner. The boulders there certainly did not look like limestone, and the muddiness and general bogginess of the ground suggests that the underlying rock is not limestone either. Wikipedia says it is quartz-dolerite whinstone. I see now why the long ridge is called Whin Sill. 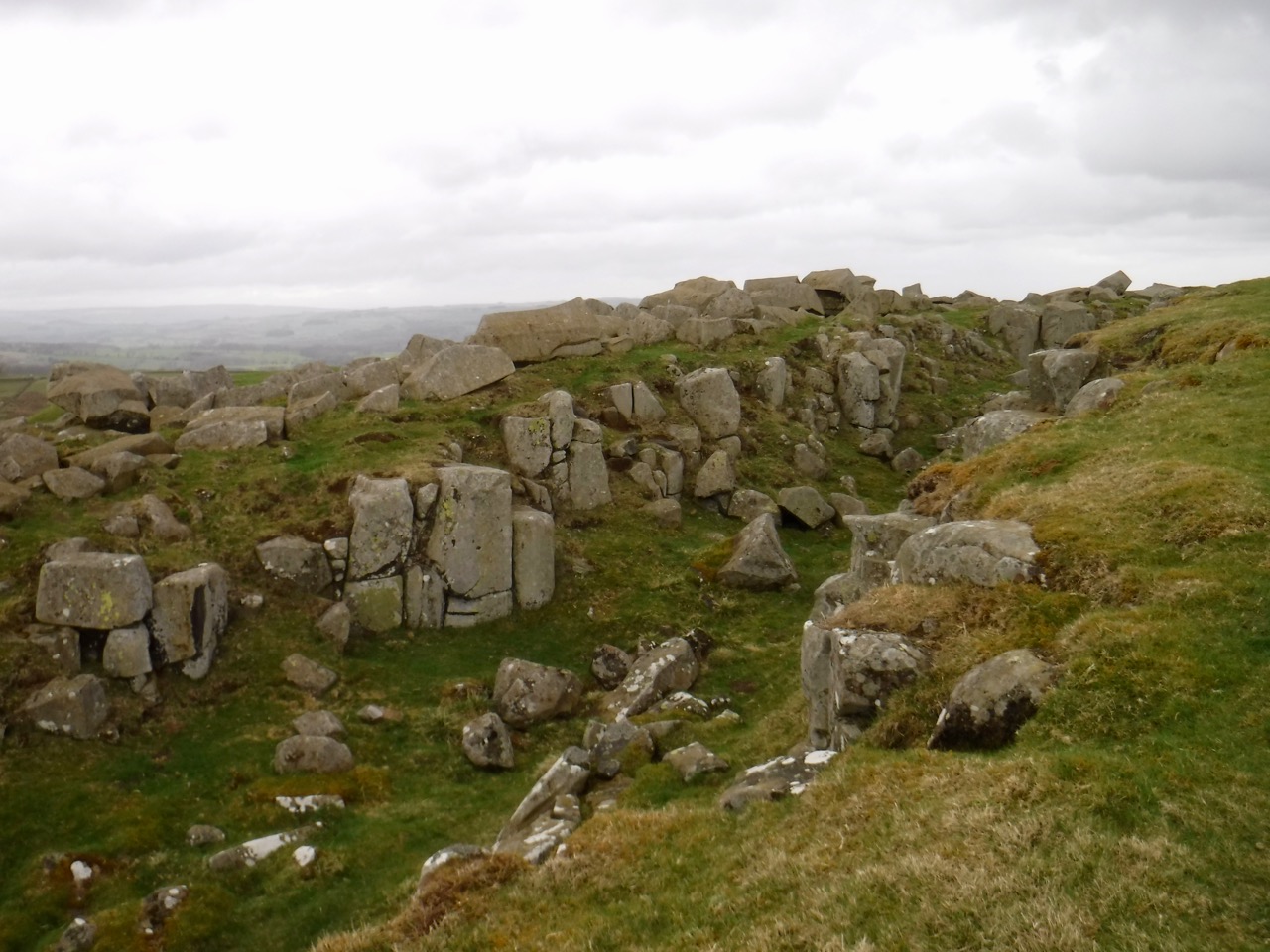 We passed a couple of walkers sat on perhaps the only dry ground, just beside the wall. They told us there was a waiting list for the place. 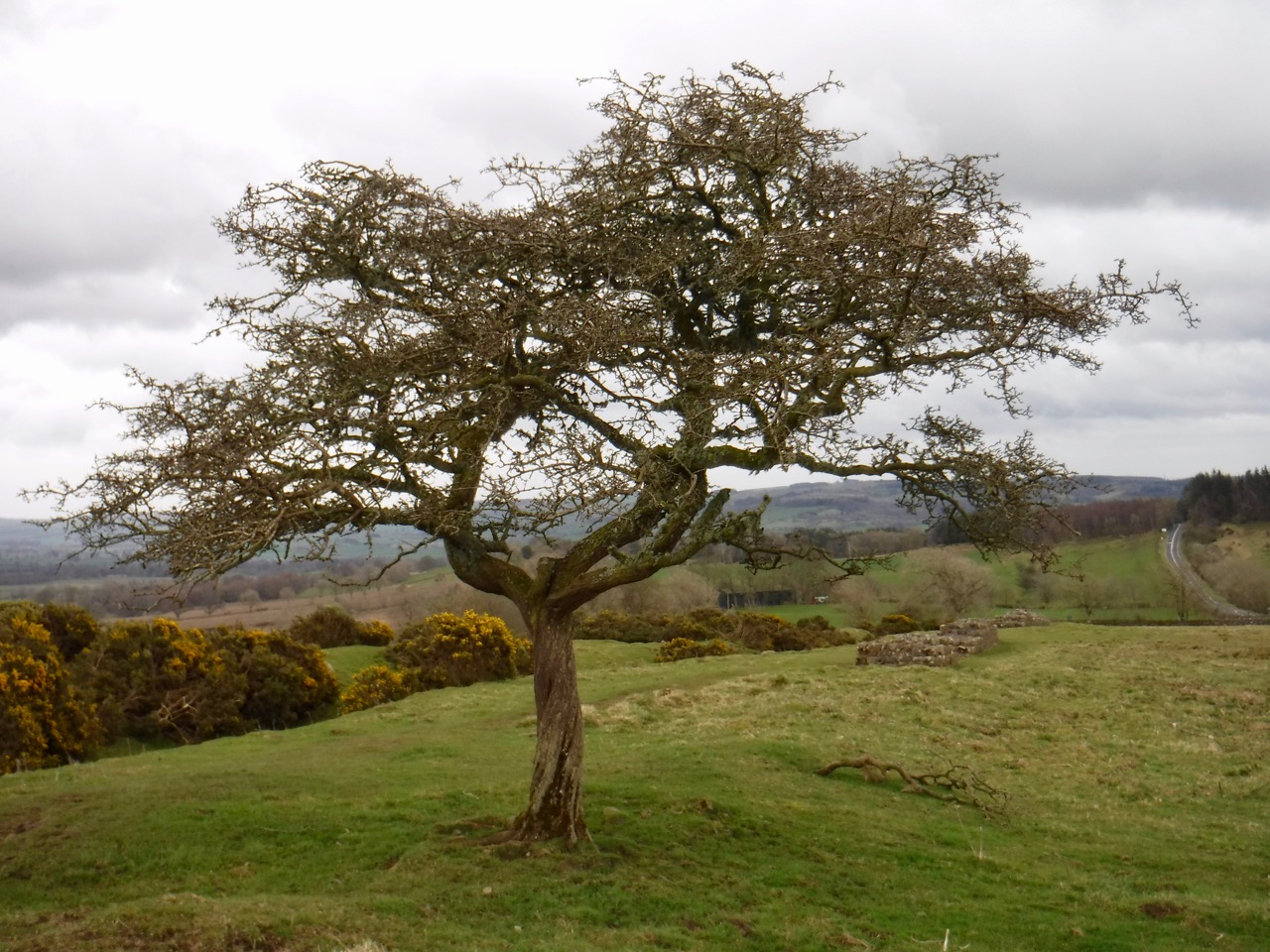 After crossing another minor road we passed first Green Carts and then Black Carts (carts deriving from cearts meaning rocky), where there is a section of Hadrian’s Wall and the remains of a turret.  The ground here became even softer and sapped my energy pretty quickly. The trail takes a detour around Walwick Hall, “a country boutique hotel” then reaches a minor road leading back to the B6318. 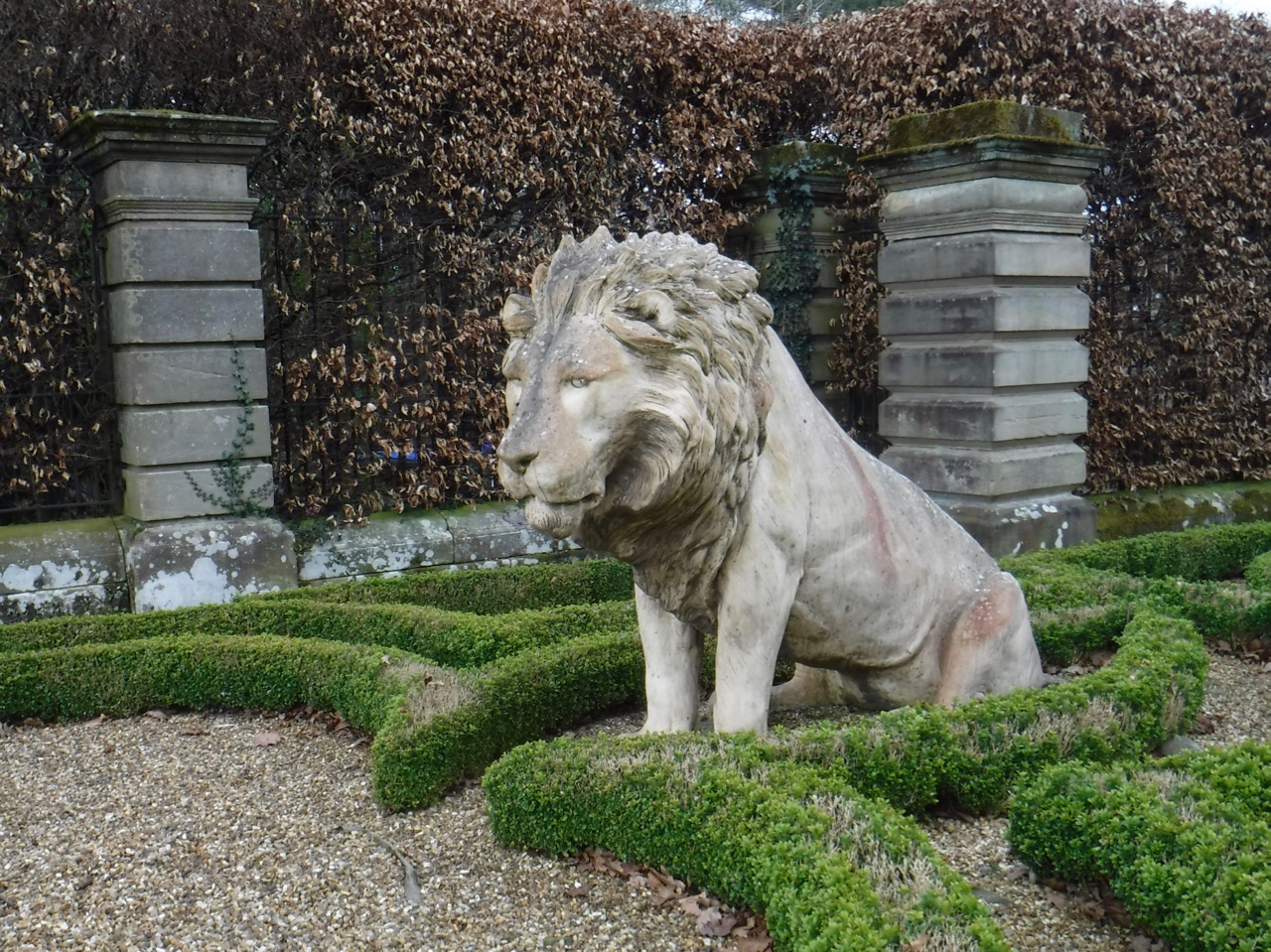 The last half mile was on the pavement, which was a relief after the soft muddy ground, past some stone lions and along to Chesters Fort for a coffee in the shop.