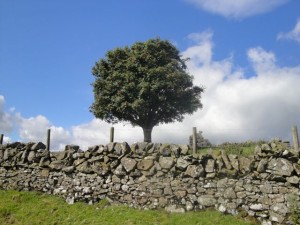 Waiting at Lochthorn the weather was beautiful, blue sky and distinct shadows. But as we headed north in convoy the sky became greyer and looked like rain. I began to think I would be doing this leg in waterproofs again, but as it turned out we were treated to perfect walking weather.

Past St Anns we chose the layby nearer the walk this time (lopping half a mile off the distance) then headed off to Moffat. I obviously haven’t grasped which car to put my clean shoes in yet. Must remember: leave my clean shoes in the car that will be at the end of the walk.

Our walk started from Moffat’s station car park (the station closed in 1954 so there was plenty of space). A brief stroll along the A701 allowed us to get our pace up except for having to stop to give directions to a couple heading for the Galloway Country Fair. The way then took us along a lane to Dyke farm before joining the route of an old roman road which was guarded by a bull. This beast lay across our path and we mistook it for a cow at first. Misgivings began as we noticed it was the only “cow” in the field. Perhaps it had been naughty? Andy felt it had a female face. Well he can tell it to its face if he wants because as we got closer it stood up…definitely a bull. Luckily docile today.

Then under the M74, alongside the river Annan and along the tree shaded avenue to the disused hotel near Beattock. From there, over the railway and up the Crooked Road. Three quarters of a mile of gradual zig-zagging climb. Not especially hard going and with views of the Moffat hills, suckling calves and cartwheeling children. The way then heads off the road up an old drove road that gradually gives up any pretence of being a recognisable path, though it is marked on the OS map.

I was pleased to revisit Stanshielrig in better weather and snap another picture of the lone Rowan tree (see above).

Walking over Weatherlaw Knowe there were no waymarkers, nor any path for that matter. The only clue was an arrow at a gate. The fallen marker post I had seen with David was no longer visible. It was only by chance that we spotted a marker post in the distance and when we got to it the signs had faded away.

Stidriggs Hill which was ahead of us at this point apparently has a ruined fort. I hadn’t seen it when I was here in the rain, but couldn’t see it in the sunshine either. Perhaps you need to go to the top of the hill.

We crossed Kinnel water twice (on bridges) then entered
Edwardsrig Plantation. here the path forked twice without any indication which fork we should choose. We headed right each time. At the end of the path was an Annandale way signpost so as it turned out we had chosen correctly. Walking along we could hear gunshots and dogs barking from the country fair.

There were more cows to navigate around at Kinnelholm rig but then we were on the home stretch, with the country fair visible as well as audible.

Cafe Ariete, Moffat for coffee and cakes. (Plus chocolate milkshake for Mike).

Share this...
This entry was posted in Dumfries & Galloway and tagged Annandale Way, Low Level, Paths, SUW. Bookmark the permalink.