The grass below – above, the vaulted sky: AW3 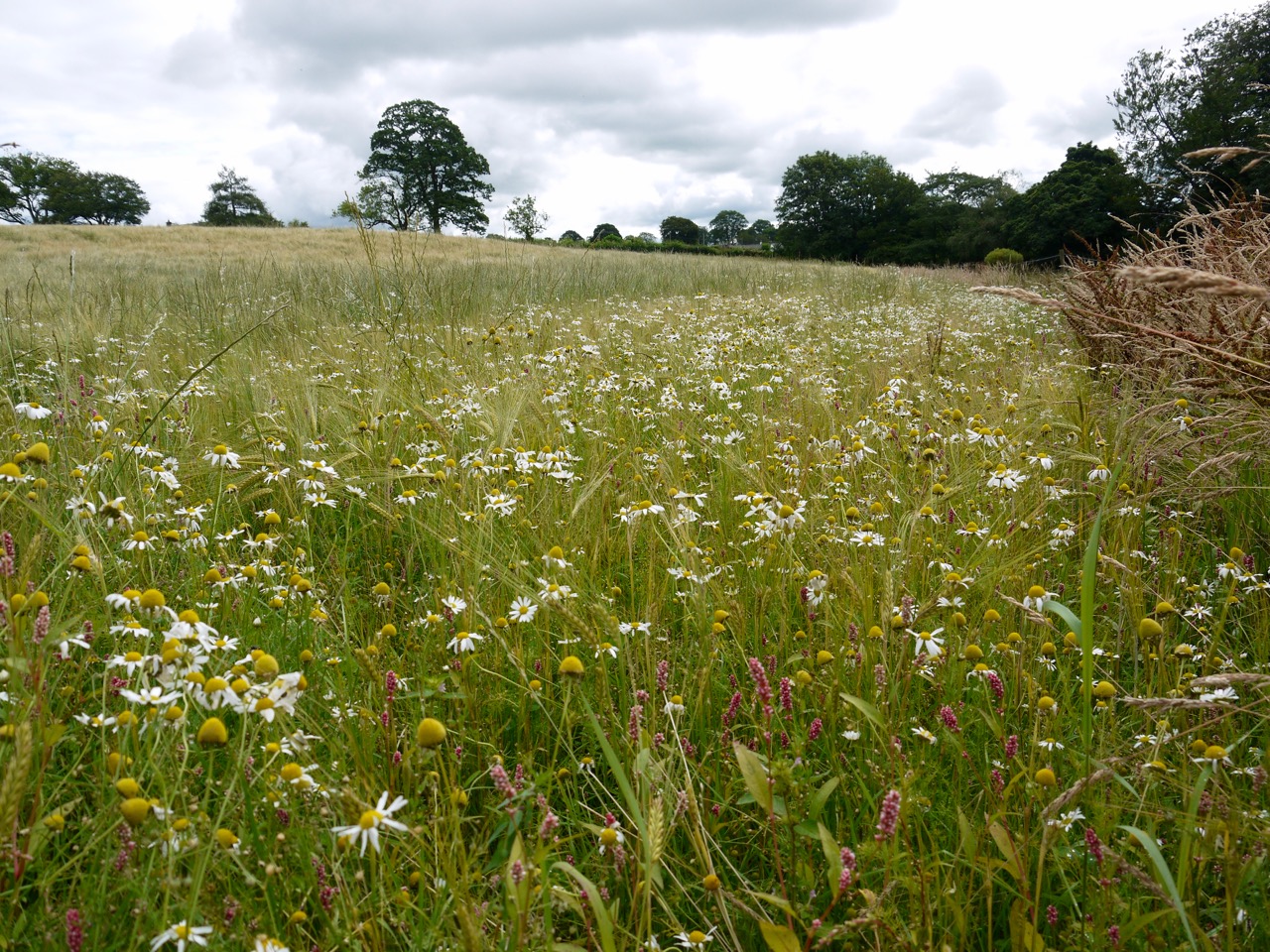 The third section of the AW on a warm day with occasional showers and no off-route wanderings. The route heads mostly south, has more descent than climb, and includes a variety of walking, with forestry tracks, bracken encroached woods, footpaths sylvan, peaty and sandy, meadows knee deep with wildflowers and wet grasses, fields of barley, pastures of sheep and cows, cattle-churned muddy quagmire, minor roads, tree lined avenues and the bonus of a footbridge where previously the AW required the fording of a burn. It is journey through forest plantations and then across a patchwork of fields. A “variety density” more than most walks and not one that easily lends itself to recalling every field.  It is six years since I last walked this route and some parts I recalled clearly while others I didn’t.

Our start was a lay by on the A701, where we spotted a television set peeping at us through the trees. One rarely sees feral TVs in the woods and I was careful not to get too close in case it attacked me with a scene from Big Brother. I was however able to approach close enough to recognise it as an old-fashioned CRT type Philips TV. It was just a short walk up the road to rejoin the AW which crosses the A701 from the Raehills estate, which hosts the Eden Festival, and climbs into the Hazelbank Plantation on a forest track. Raehills House came into view across the valley as we climbed leaving the noise of traffic behind us.

An AW signpost directed us off the track and up a narrow grassy path which in 2010 had trees on both sides, but now has only bracken on the right. It is short cut I think since it rejoins the track a little higher up. 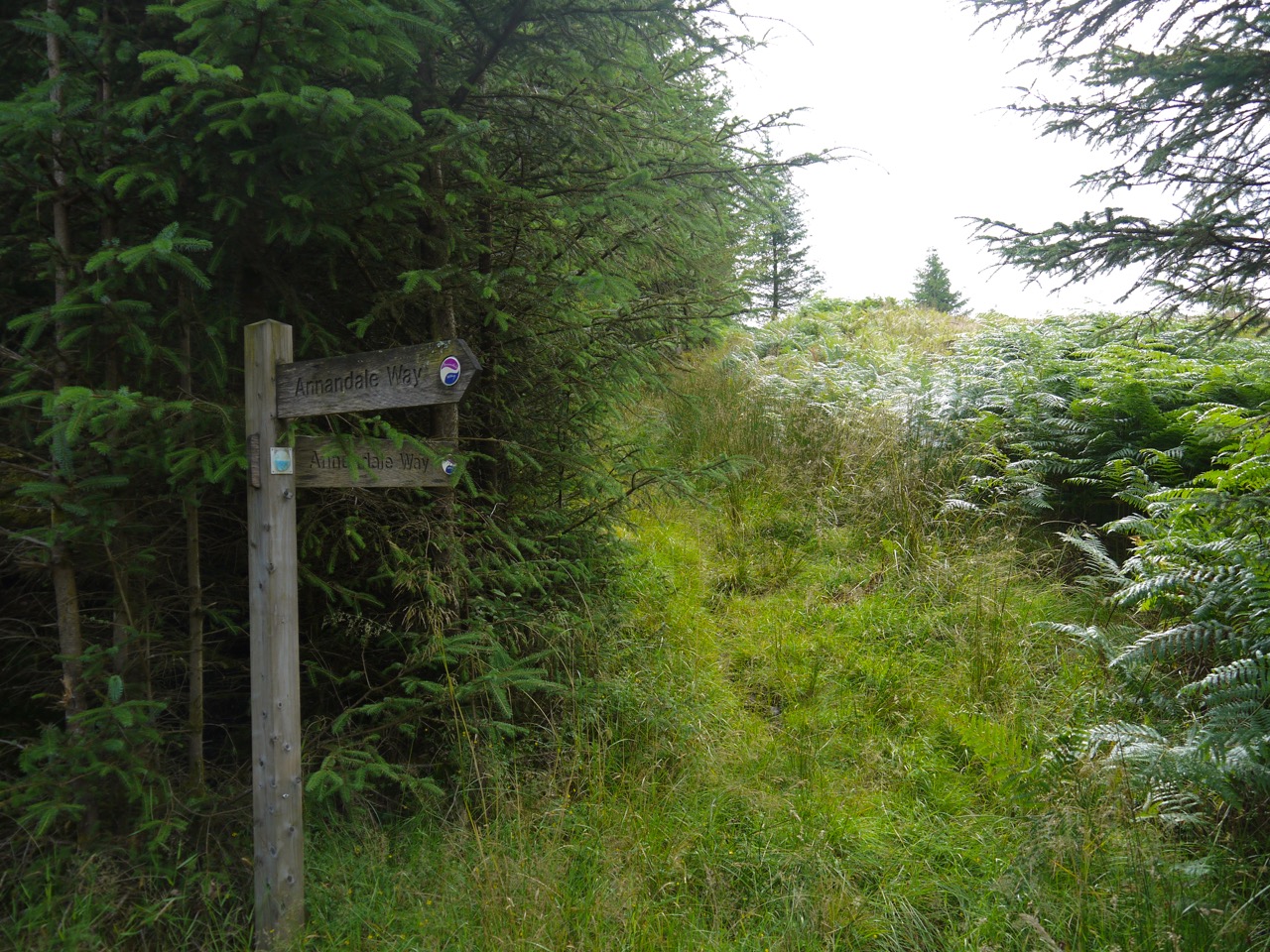 Walking along here we stopped to look across to Queensberry, and admire the varieties of green in the trees below us. I thought if I ever took up watercolours this would be a good place to experiment with the colour green. As I mused and Audrey photographed, a chap drove by and stopped to say there was a hut further along the track and we were welcome to go inside for a drink as long as we shut the door after us. Feeling a little like Hansel and Gretel invited into the house in forest, we thanked him, and then started walking again.

We eventually reached some huts, but with no sign of the inviting chap or his car. There were several drum-like constructions each with a small fence surrounding it. I presumed from inspecting them that these were feeders and once back at home I found photos from six years earlier showing young grouse running along the track here. 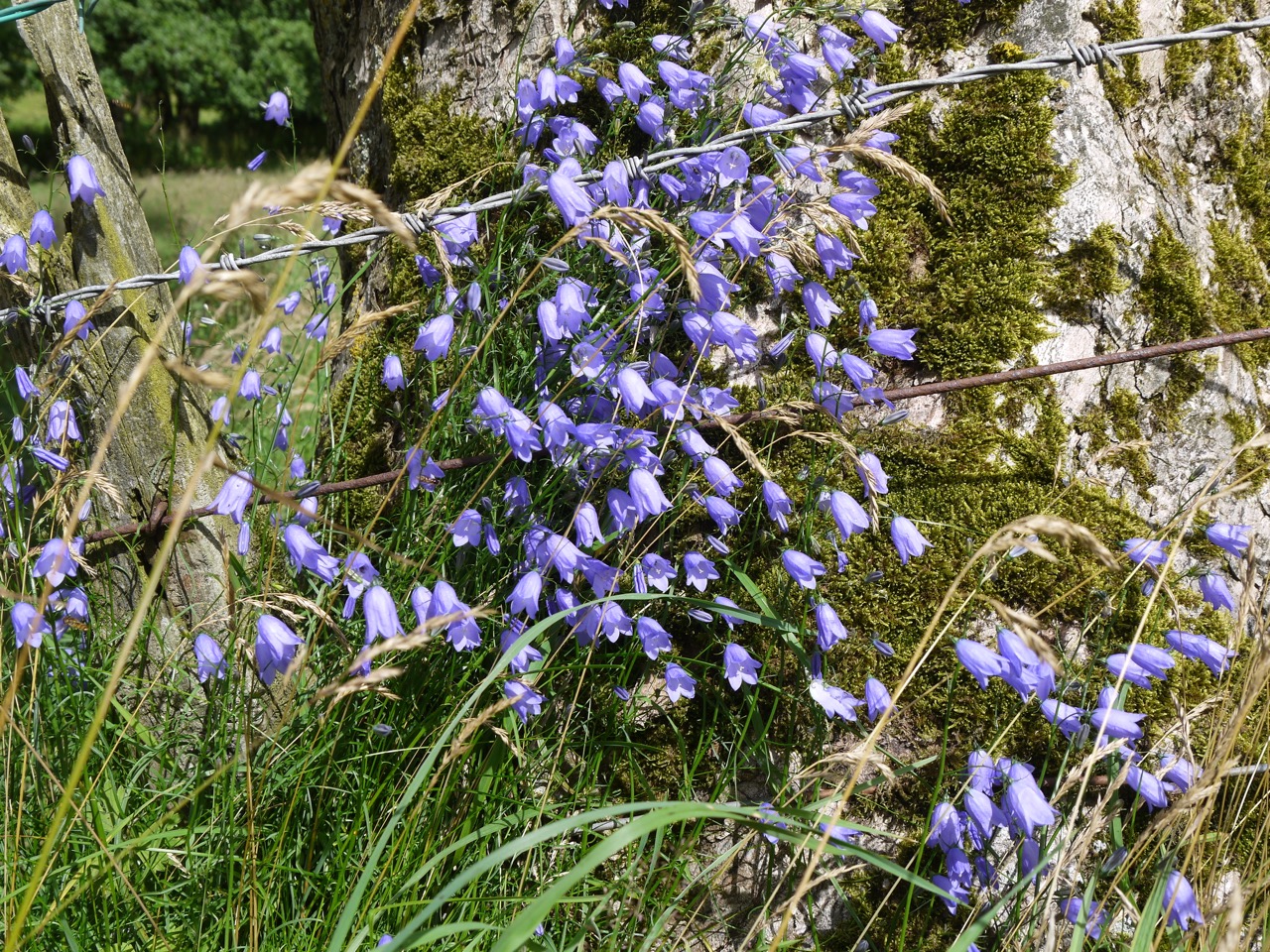 After a couple more kilometres walking by trees or felled forest, a gate and a minor road signalled the end of Hazelbank Plantation. We turned right and walked past twin cottages with a rather industrial look to them. The AW then left the road at Blackburn, which is no doubt named for the nearby Black Burn, a minor tributary of the River Annan. The first section here is along a track between two fences, so there was no way to get lost, though we have managed it before. The track then reached a quadrangle overgrown with fireweed and a dilapidated sheep pen. We walked on but in stopping to take a photo I noticed an AW plaque on a gate at the NW corner of the wee quadrangle. So we walked back around only to find that it took us around to where we would have been had we just carried on.

Another AW gate took us through the hedgerow and an arrow pointed straight ahead, west, but that didn’t look likely to be correct since it headed across a filed with a dense wood on the far side. So we turned left (south) walking through knee-deep wet grass, with butterflies fluttering by and wildflowers scattered everywhere. Large old trees stood in the hedgerows and gave us shelter from our first shower of the day. 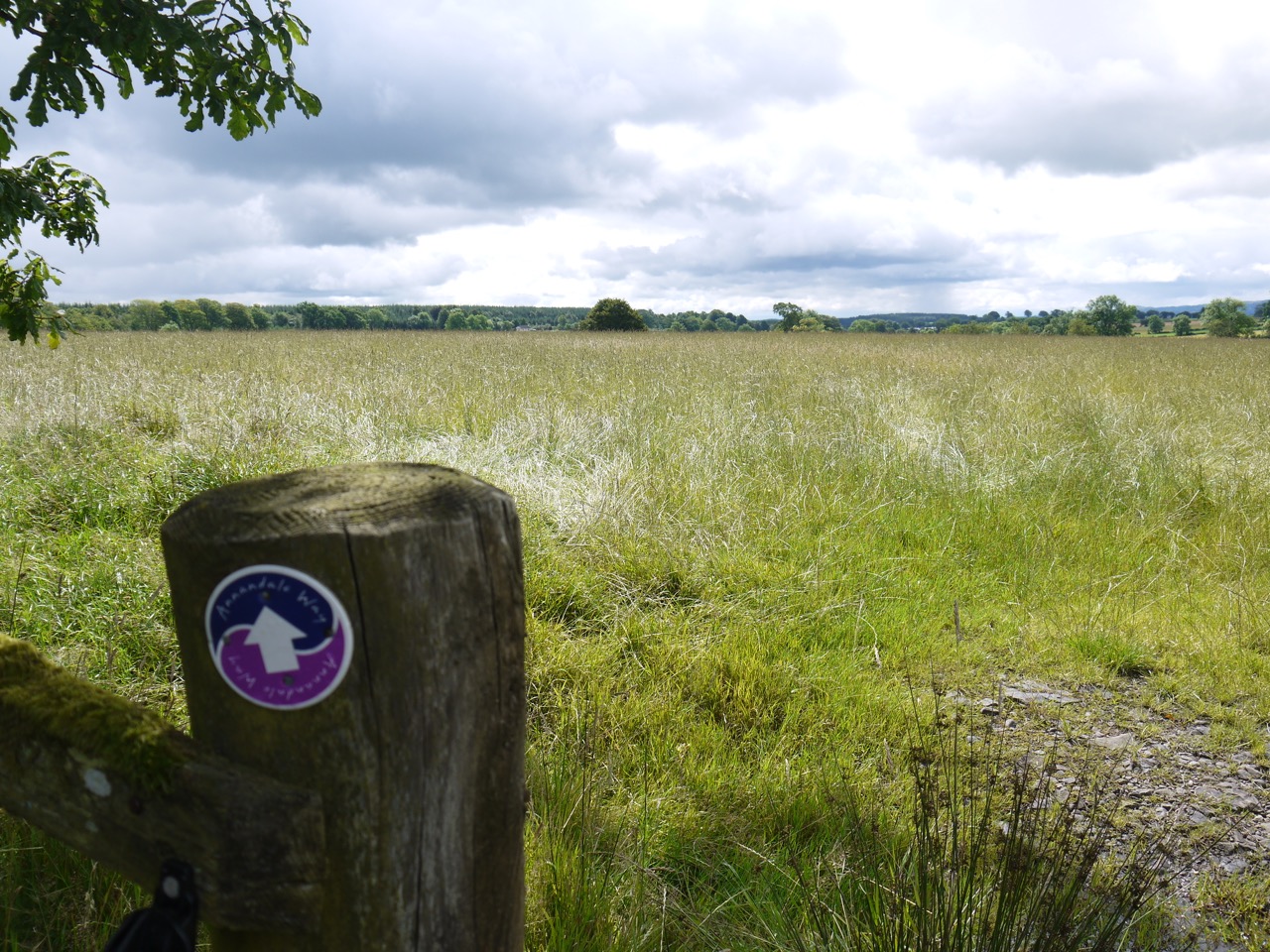 After passing a plantation on our left we came to another gate, an arrow pointing a little left of straight ahead and no evidence that anyone had walked across the meadow in front of us. I had taken a photo here the last time and titled it “Which Way?” and the feeling was the same this time. The arrow’s direction was correct and once in the middle of the meadow we could see the gate on the far side. The meadow was scattered with lilac tinged meadow foxtail among the sea of grass. The next field was barley, swaying its fronds in the gentle wind, and took us to the minor road at Greenbeck. What looked from afar to be a crow flew by but its call was not that of a crow, and since I had binoculars to hand I was able to get a better look at the Sparrowhawk as it flew around.

Across the road we turned along a farm track fenced in between fields. The hedgerows were full with woundworts, marsh and heath, hemp nettle, and burdock as well as the usual suspects. We weathered a second rain shower under a tree. I was growing impatient waiting but the rain stopped as soon as I took off my rucksack to reach for my jacket. How easy it is to assume causation even when one knows better. Well, back on the move, jackets still packed away, we skirted the edges of more fields of barley, then paused when we reached a gate into a quagmire of cattle-churned mud.  The cattle were elsewhere so we could choose our own route and picked our way through with surprisingly little mud to show for it. 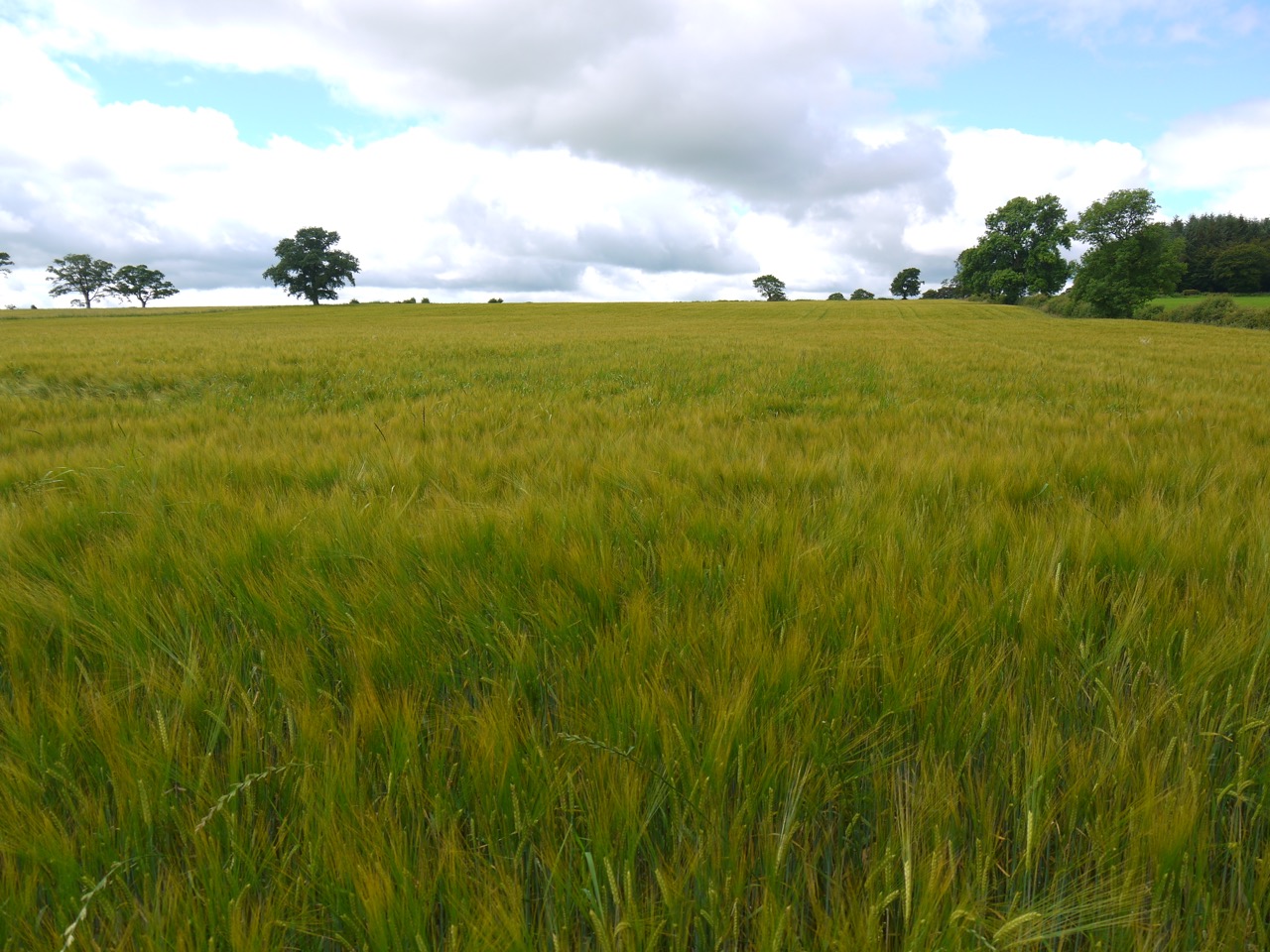 In the olden days we had had to ford the Black Burn on the far side of this field, but a new wooden footbridge spared us a wetting. The far side was another field of barley hemmed by a broad avenue of scentless mayweed and redshanks. The minor roads we crossed were our markers of progress and we crossed another here at Heathfield. This took us into a long sloping field with cows scattered about. They were mostly lying about but got up when we got near and one young lady gave us a good braying so we gave her a wide berth.

The Black Burn ran along at the bottom of the field and we followed what I presume is the route the cows take when walking along the field. This took us behind a house before rising up to a gate onto the B7020. A small plaque told us we were in Applegirth Estate/Crown Estates, so we were careful not to give any impression that we were poaching the Queen’s deer. A cottage by the road had an overgrown but very colourful garden.

A tree lined avenue took us down to Lochbrow. The trees here must be very old, some had been felled and the stumps were massive. I can’t help but think that this must once have been a more important thoroughfare. There were two plastic chairs beneath a grand old oak with a visitors book in a wee niche beside them. I was tempted to stop there for such but we pressed on, I forget why. They were a bit muddy. 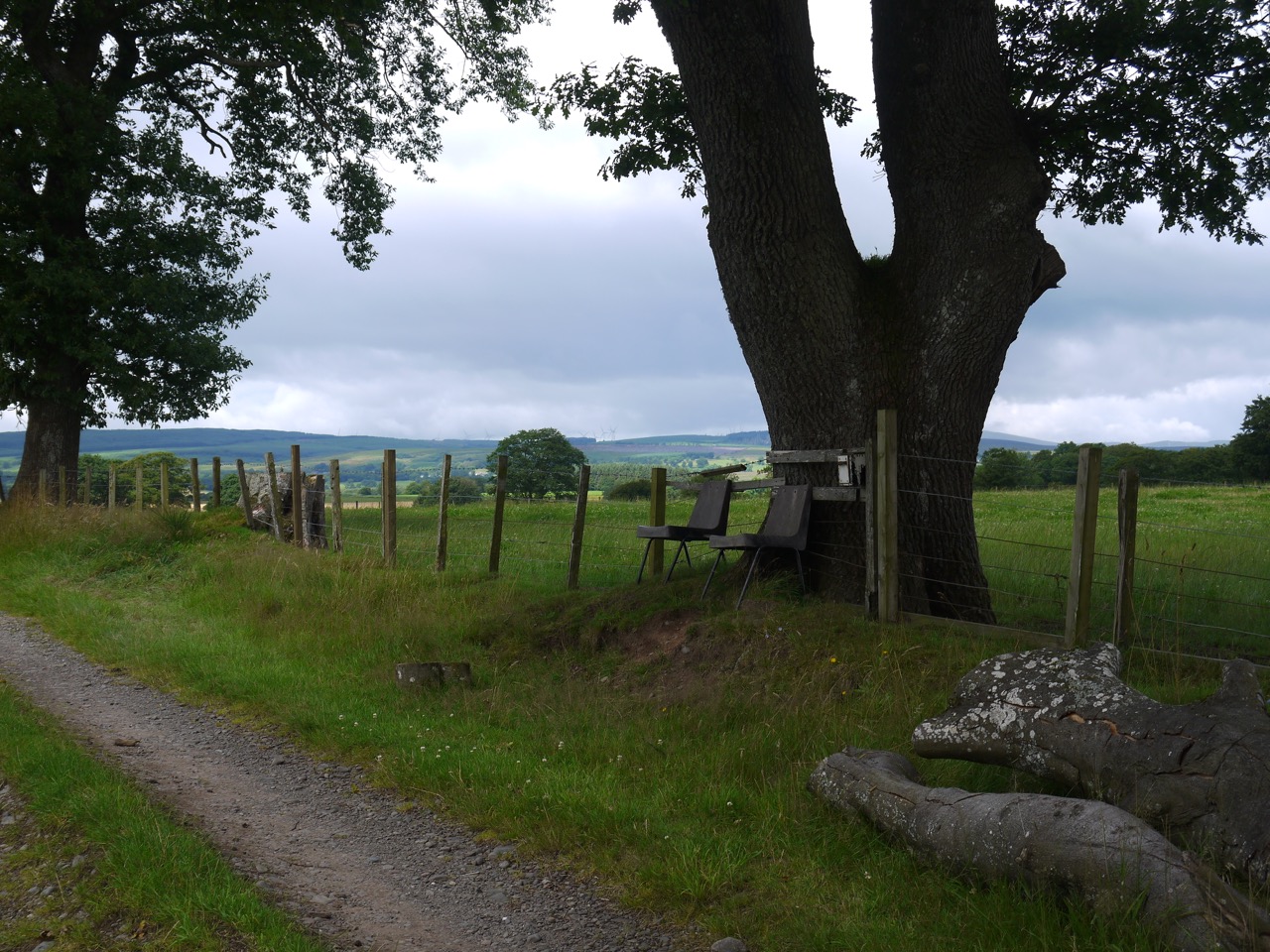 Seats to ponder the views

At Lochbrow we turned right onto another minor road which took us past farm buildings at Archwwood, with swallows chattering as they flitted through the air. The River Annan, grown since we last saw it, drew alongside us adding the sound of running water to our footfalls. When the road turns from the river there is a woodland and can AW signpost directed us into it. This is Spedlins Flow, a woodland but with the epithet “flow” giving some idea as to the land.

Spedlin’s Tower is visible along an overgrown track. The original building dates from the 15th century, and is supposed to be haunted. Here is the tale from Mysterious Britain and Ireland:

The story goes that a miller named Dunty Porteas was locked away in the tower dungeon for some petty reason after he had fell out of favour with Sir Alexander Jardine. Sir Alexander went on an errand to Edinburgh forgetting that the dungeon keys were in his pocket. The poor Miller slowly starved to death, and when the door was opened it was discovered that in his desperation and hunger he had gnawed the flesh from his arms and hands. For years afterwards the ghost of the miller tormented the family with tortuous screams of hunger and pain.

The Jardines in desperation hired an important minister, who carried out an exorcism and finally managed to confine the spirit to the dungeon. The binding was carried out with the aid of a bible that was left near the dungeon and acted as a barrier for Dunty’s restless spirit. The bible was sent to be rebound in Edinburgh in 1710, allowing the millers spirit to roam free and wreak havoc once again, until the bible was returned to its rightful place. Folklore to this day says that of you poke a stick into the dungeon of Spedlins Tower it will come back half-chewed.

I think Dunty might have relocated to my house because if we leave things lying about, they can be found chewed the next day, especially shoes. 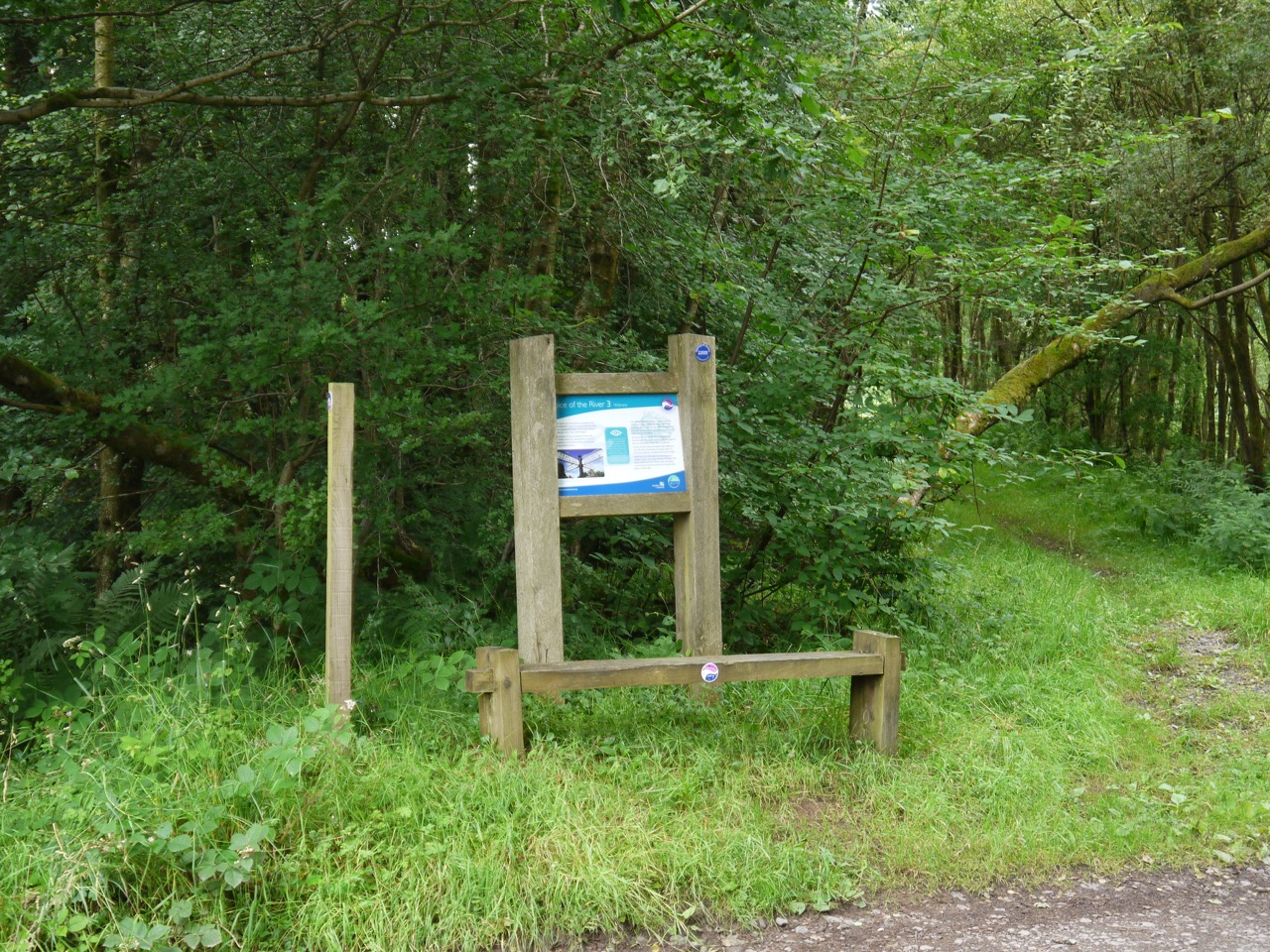 Opposite the track to the Tower is one of the minimalist Annandale Way benches, beside an AW information board. Sitting in the shade of trees would have been a pleasant place for lunch but the “flow” part of Spedlins meant there were enough insects about to make eating sandwiches there a poor choice, so on we went.

There was then a junction with no marker post, though the direction is clear on the OS map, even though I had taken a map which did not have the AW marked on it, it being so old. Judging by the close up pictures of Spedlins Tower I took in 2010, we must have taken the wrong turn here back then. We took the correct turn this time and walked on with mixed woodland on our right and farmland with a combine harvester to our left. 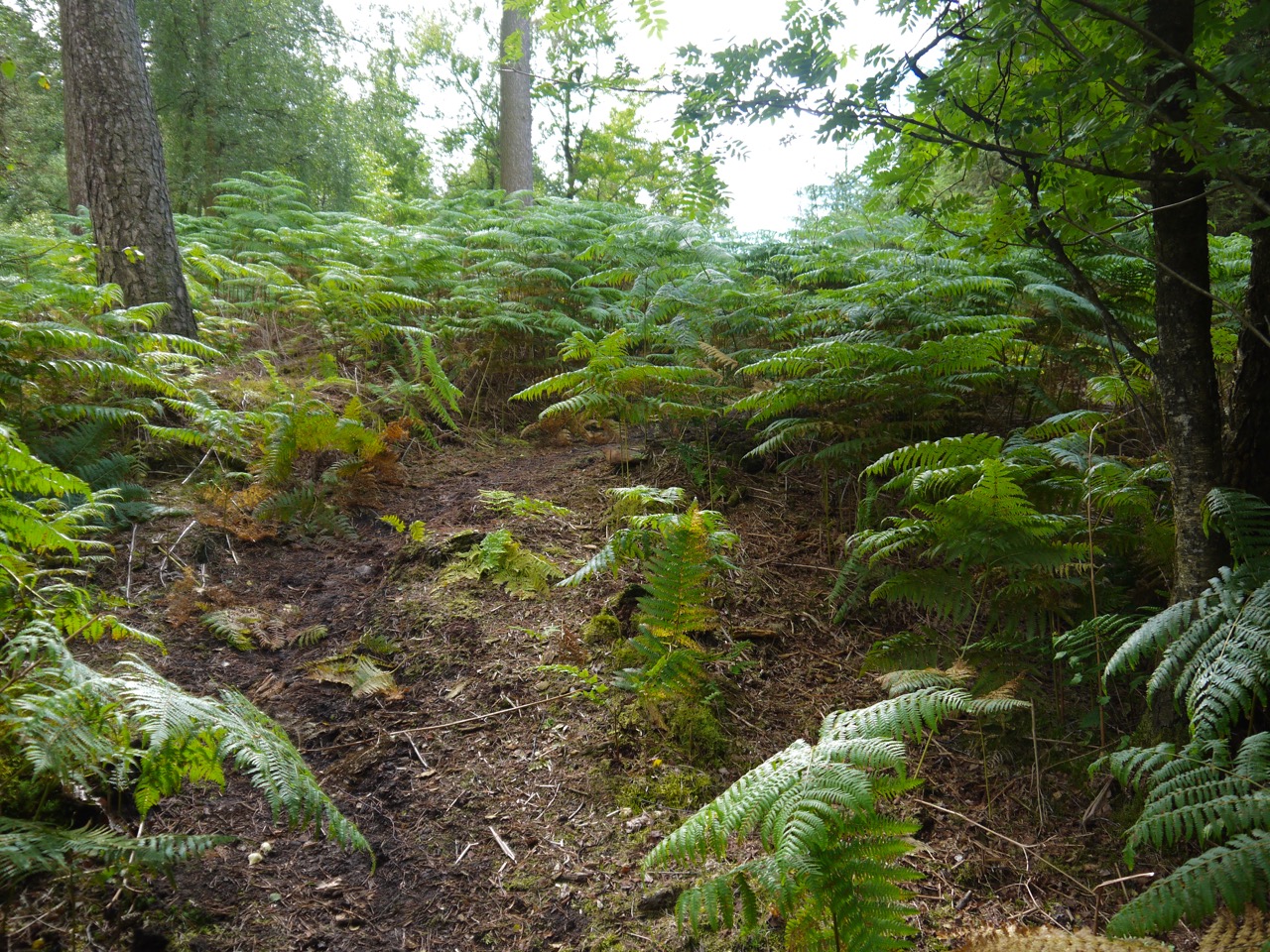 The way into Corncockle Plantation

We paused for coffee sitting on a Ha-Ha, watching the combine harvester and another sparrowhawk. The heather around us was in various stages of flowering, some clumps in full flower, others yet to make an effort.

After this minor road we climbed back into woodland, initially through bracken and then along narrow footpaths through Corncockle Woodland. Much of the walking was on peaty ground but with other stretches on more sandy ground. 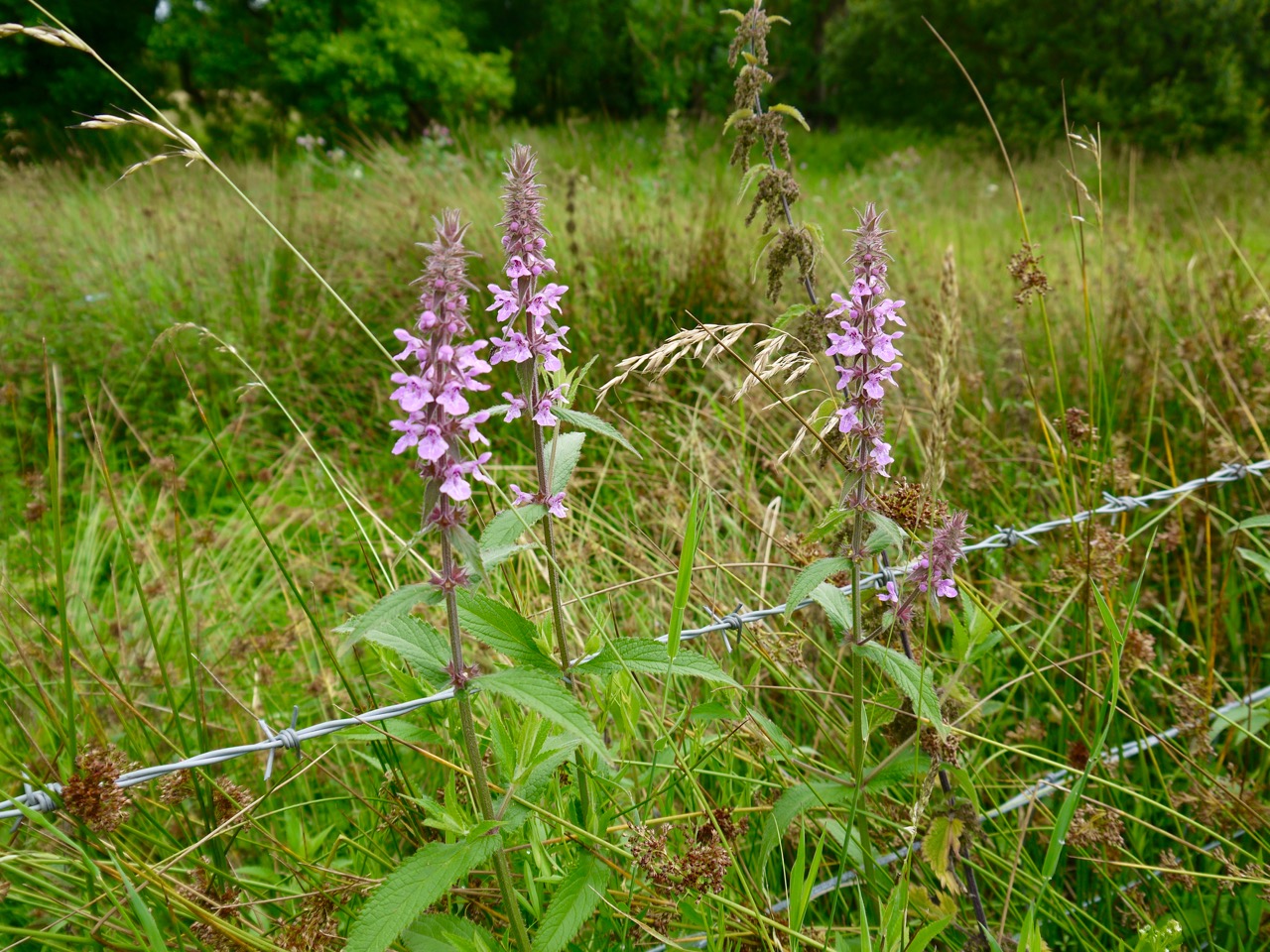 The woodland ended at the Templand-Millhouse bridge Road where the AW splits into the route via Lockerbie and which we took, via Lochmaben. As before we only spent a short time on the road itself and then turned off the road along the edge of fields with sheep and cattle. The route runs between a drystone wall and a wire fence, and looks to have been mown.

The final section of the walk is along minor roads into Lochmaben, crossing Kinnel Water. On of the farms here has the strange name Kinnelhook which presumably describes the curve of the river here.

On the outskirts of Lochmaben we found some common blue sow thistle, which isn’t that common in my opinion. Given its position I presume it to be a garden escapee.