Romans and Reivers: 8 – The tribute of a grateful tear 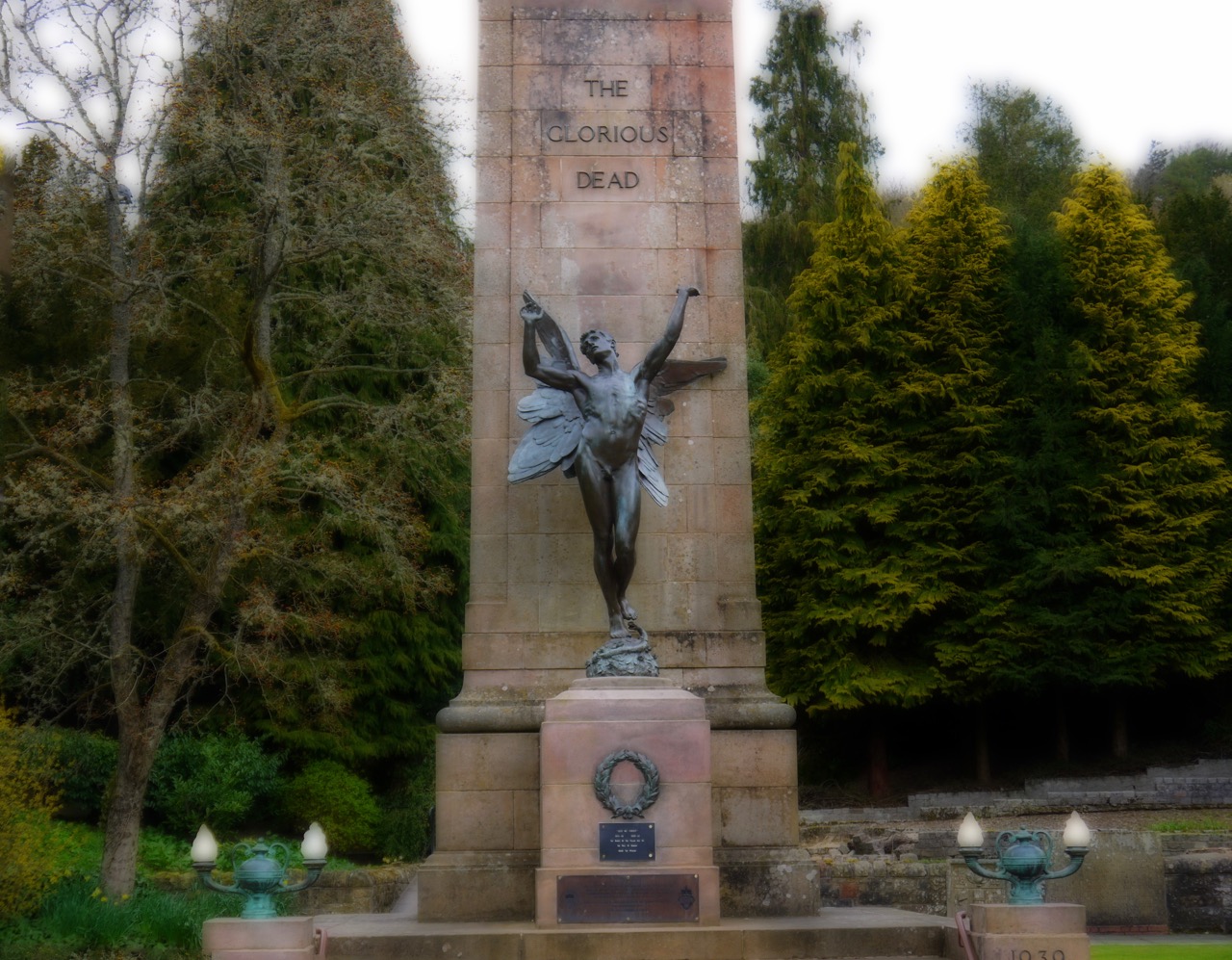 On our previous R&R outing we reached the place we had thought was the end of the trail only to find R&R signposts pointing onwards. We had followed the signs, but uncertain how far we had to walk, had turned back for the car. This outing was our foray to find the actual End. Unbeknownst to us, we had only been 1.2 miles from the end of the trail when we turned back.

Because this section of the walk was to start in a park, I thought the dogs might have to be on leads when we got out of the car so decided a short walk somewhere a bit wilder, off their leads, would let them blow off a little steam and make the lead walking a little easier. Since we had to drive through Langholm I though it would be an opportunity to walk on Whita Hill and visit the MacDairmid Memorial and the Malcolm Monument.

The MacDairmid Memorial, a steel and bronze structure in the shape of a giant book, recalls the poet Hugh MacDairmid, born in Langholm, who was a joint founder of the National Party of Scotland (a forerunner of the SNP, for whom he stood as a candidate). A nearby cairn has a plaque inscribed with some of the his verse and  explains that the memorial shows representations from his poetical works. 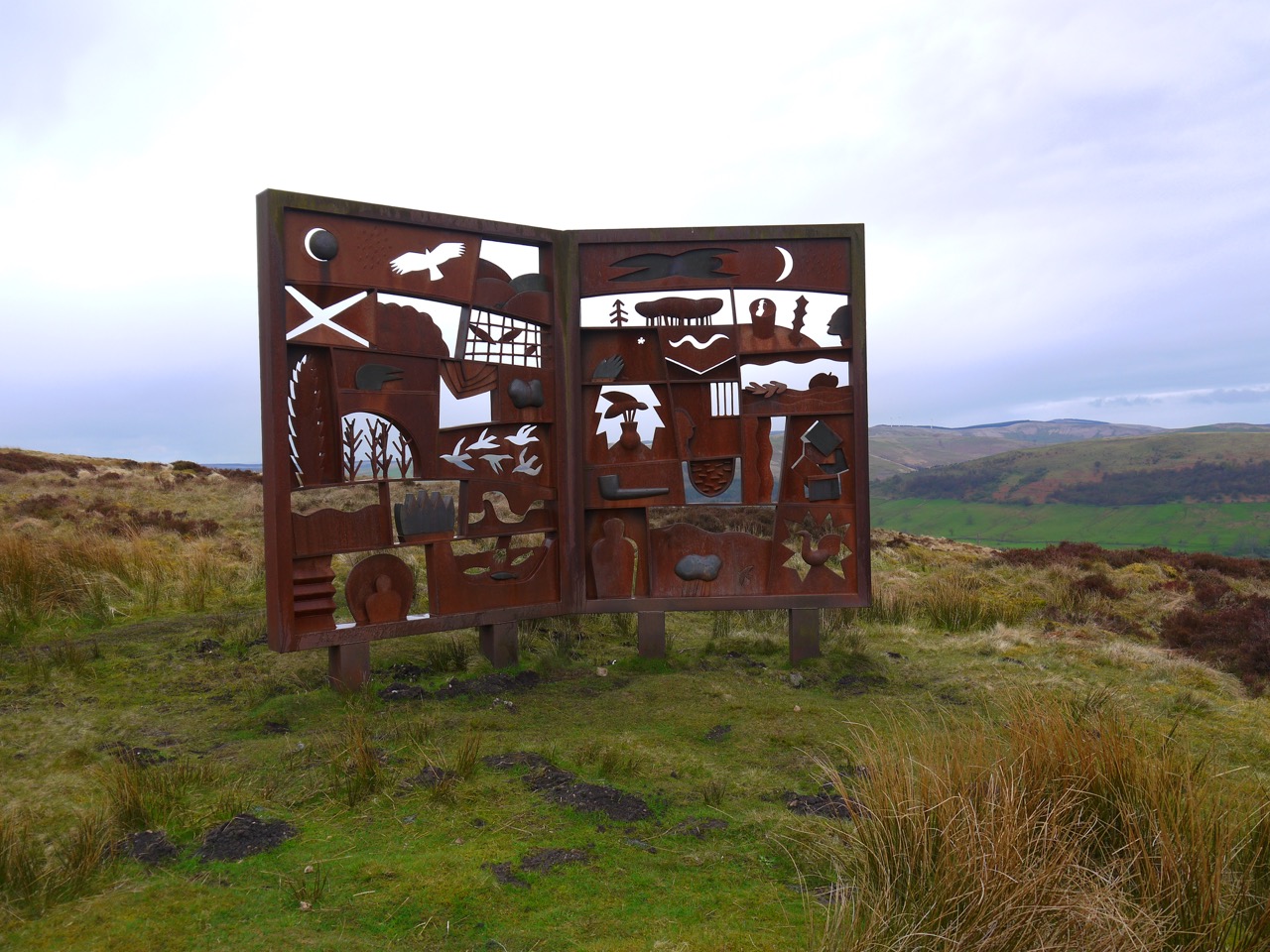 In looking through some of his poetry I came across this piece, “Scotland, small?” which I had read before without realising it was MacDairmid’s:

Scotland small? Our multiform, our infinite Scotland small?
Only as a patch of hillside may be a cliché corner
To a fool who cries ‘Nothing but heather!’ where in September another
Sitting there and resting and gazing around
Sees not only the heather but blaeberries
With bright green leaves and leaves already turned scarlet,
Hiding ripe blue berries; and amongst the sage-green leaves
Of the bog-myrtle the golden flowers of the tormentil shining;
And on the small bare places, where the little Blackface sheep
Found grazing, milkworts blue as summer skies;
And down in neglected peat-hags, not worked
Within living memory, sphagnum moss in pastel shades
Of yellow, green, and pink; sundew and butterwort
Waiting with wide-open sticky leaves for their tiny winged prey;
And nodding harebells vying in their colour
With the blue butterflies that poise themselves delicately upon them;
And stunted rowans with harsh dry leaves of glorious colour.
‘Nothing but heather!’ ̶ How marvellously descriptive! And incomplete!
– Hugh MacDiarmid

So true. There is much to see on the moors, and much so easily overlooked.

From the giant book we looked northwards where a bank of rain stood across the valley of Ewes Water, then set off along the track towards the Obelisk hoping the rain wasn’t coming our way. But within five minutes it was upon us and, rather than rain, it was hail in a freezing wind. I’d like to be dramatic and say the hail was horizontal, but it was a good third of a radian off the horizontal. The direction was just right for Audrey’s pockets which, left open, filled with hail. I trudged on, head down, but the dogs didn’t seem to mind the weather. 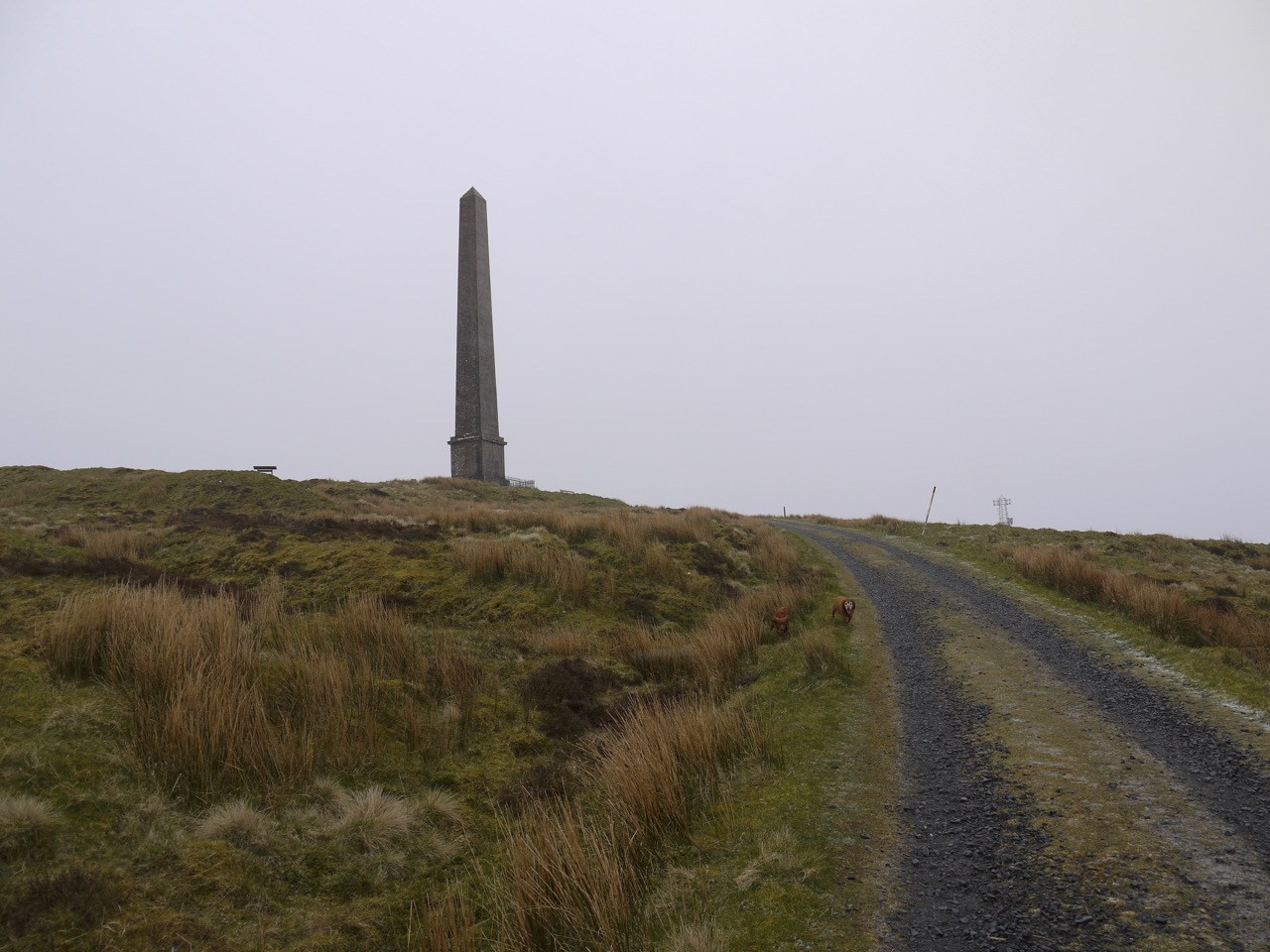 There were benches for rest, and contemplation of the views, on the way up and near the monument itself but the freezing hail limited the views and kept us moving. The Malcolm Monument is a hundred foot obelisk, described in some reports as granite and in others as white sandstone. It commemorates General Sir John Malcolm and had another famous local, Thomas Telford, involved in its construction. Given the weather our examination of the monument was necessarily rather brisk.

By the time we had walked back down to the car the hail had passed so I presume our timing had been particularly unlucky to have us walking just when the hail was falling.

Having packed the dogs back into the car we set off for Hawick and found a place to park  in Wilton Lodge Park. We headed back to the western entrance where we had seen our last Romans and Reivers signpost and walked along the riverside path, the dogs dipping down into the river at times. The grassy banks here were spotted with bright yellow lesser celandine, easily outnumbering the dandelions. There were daisies as ever but the wood anemones were also doing their bit for white petals. 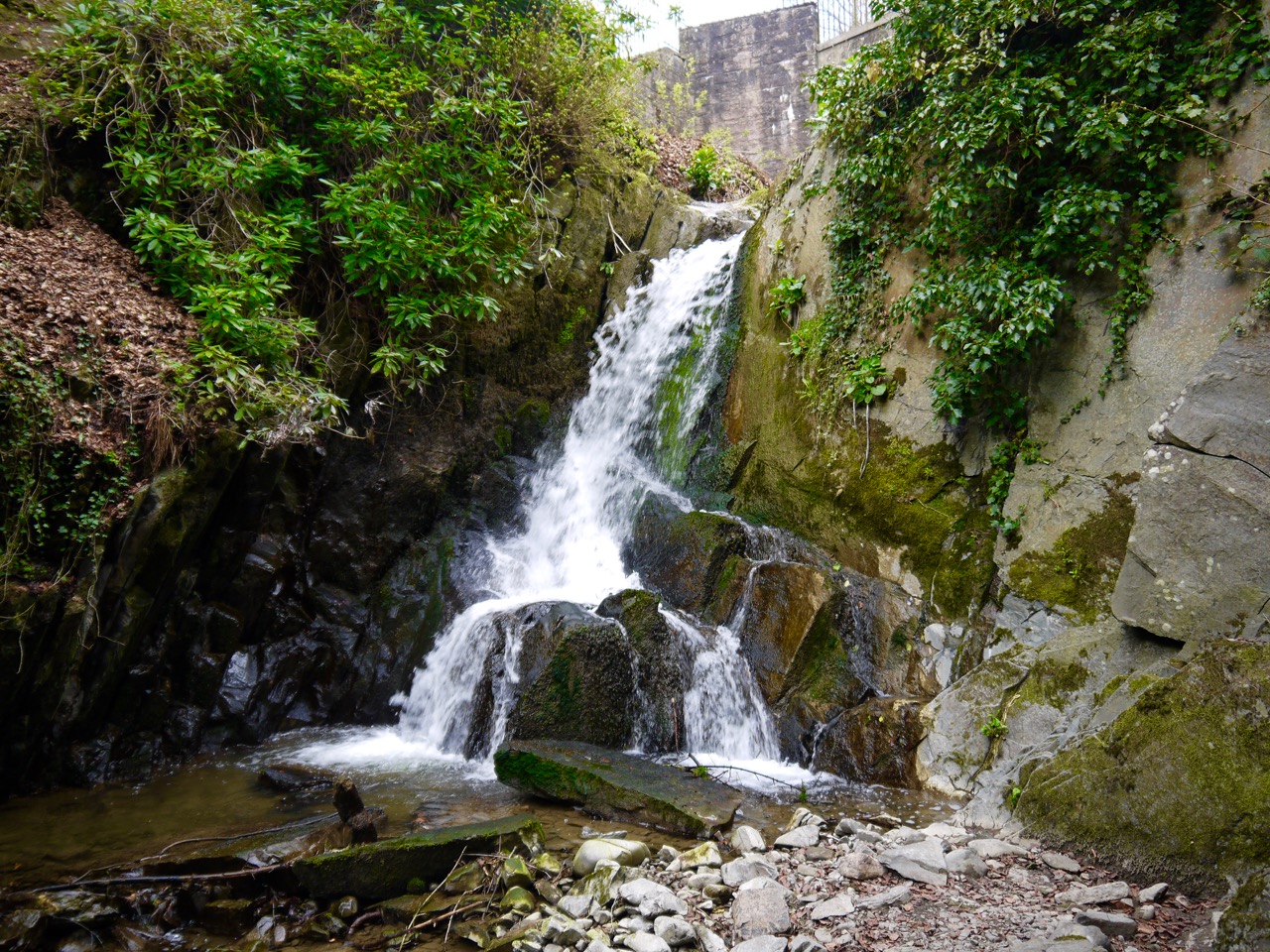 We reached the bench dedicated to the Dunlops, which was as far as we went on our last visit, and set off into the unknown. This took us further along the riverside path until we took a brief detour into the ornamental gardens of Wilton Lodge. There are a few things to see in the park: a bandstand, ornamental water fountains, statutes to Steve Hislop (1962-2003), and Jimmy Guthrie (1897-1937), two locally born motorcycle stars, a waterfall on the Cala Burn and a War Memorial. 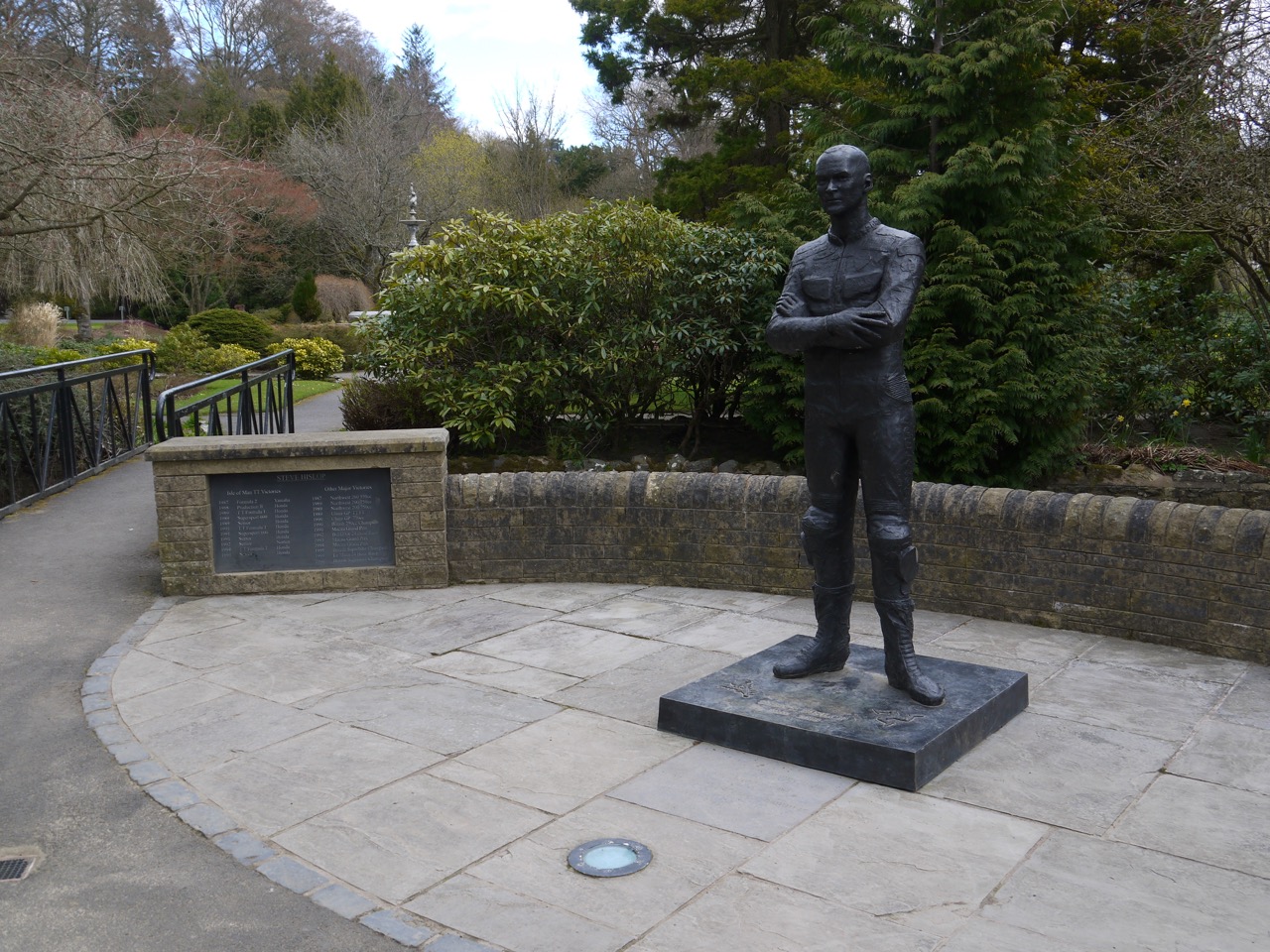 The War Memorial is well placed to allow quiet contemplation, and its stark inscription “The Glorious Dead” invites the classically read to shed a tear.

Still in short intervals of pleasing woe.
Regardful of the friendly dues I owe,
I to the glorious dead, for ever dear!
Indulge the tribute of a grateful tear.
– Alexander Pope’s translation of the Odyssey

Beyond the gardens we came back to the riverside path, the park narrowing to the iron gates at its entrance. The banks here were filled with flowers, primroses, bluebells of various hues, grape hyacinth, lesser periwinkle, daffodil and narcissus. Photographs made somewhat difficult by the dogs inclination to check out (read “run all over”) anything we give any attention to

Beyond the park entrance we found a Romans and Reivers sign pointing back the way we had come and not pointing onwards. We took this to be the end of the trail and posed for our photos. 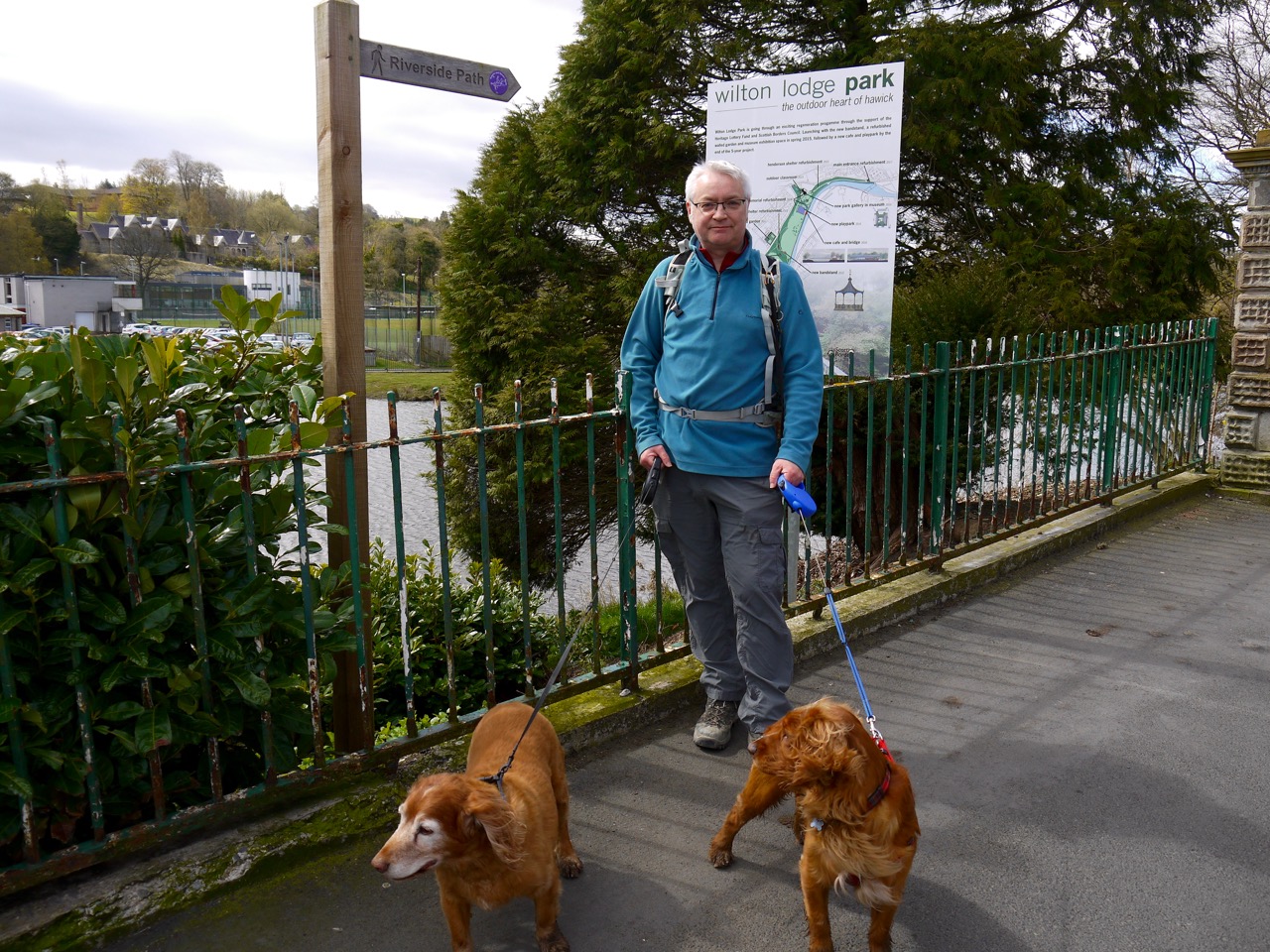 The end of the R&R

We made our way back walking through Violet Wood, but saw no violets in the wood. (Though we did notice some beside the A7 when driving home.) 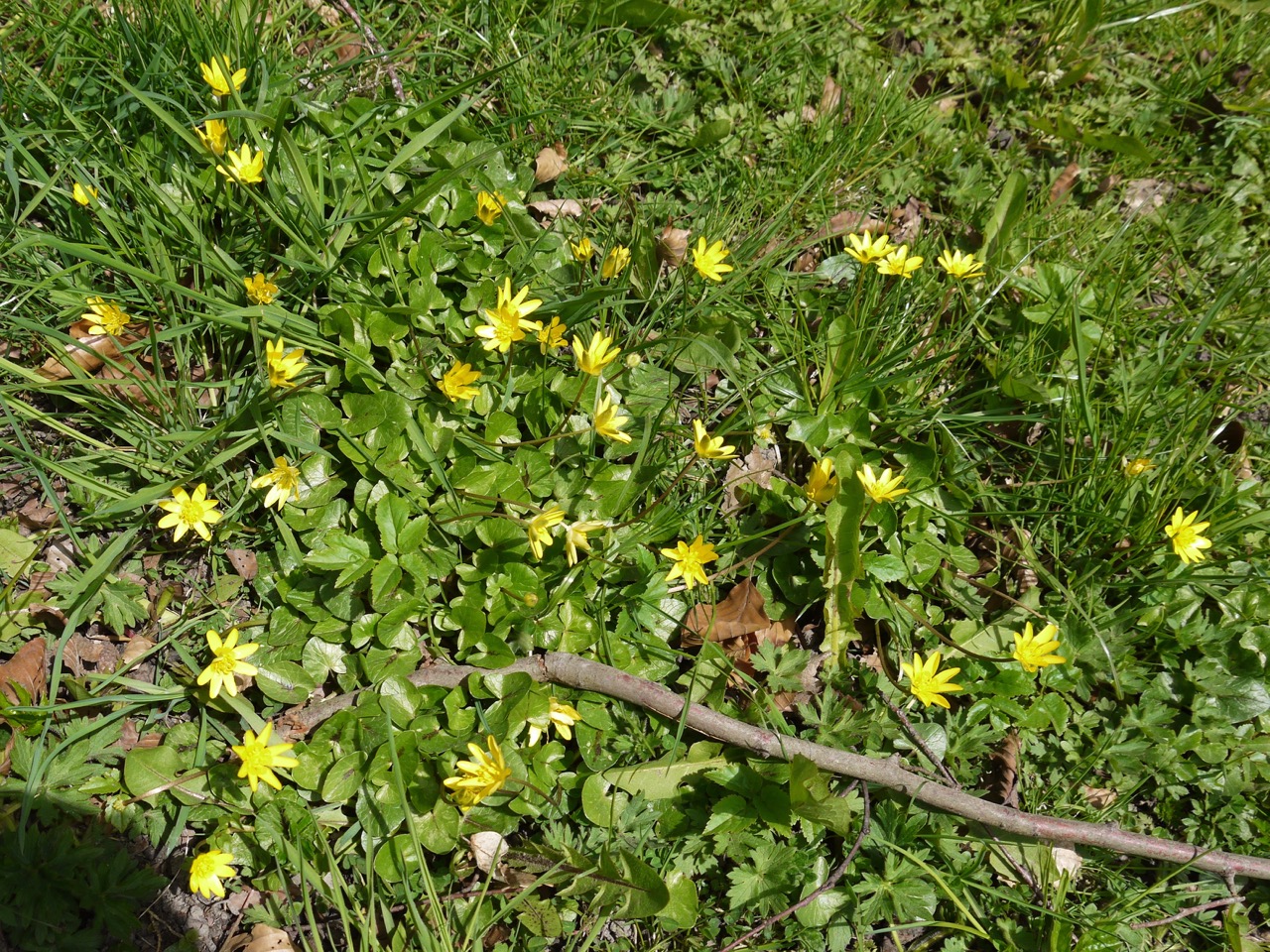 So that is the Romans and Reivers Trail completed. 57.7 miles on the trail and 75.4 miles altogether. We walked in sunshine, snow, hail, mist and rain; on tarmac, grass, rock, heather, mud, and slurry; from the season of the snowdrop to that of the celandine; from Ae in Dumfries and Galloway over the watershed to Hawick in the Scottish Borders; through the haunts of centurions, infamous reivers, famous poets, and long dead covenanters; buzzed by swans, we encountered ancient burial barrows, pre-historic earthworks, broad leafed and conifer forests, a cave of sorrows, snow-covered moors, hares, deer, ponies, lambs, stone lions, sheep skulls, rainbows, giant carved newts, Roman roads, Symbol stones, Buddhist prayers; memorials to lives lost to lightning, plane crashes, helicopter crashes, motorcycle accidents and in wars; we crossed the Witch’s Wate without mishap, walked the Crooked Road without twisting an ankle, and found a very welcome footbridge across Borthwick Water where we thought we might need to go a-wading.

Share this...
This entry was posted in Borders and tagged Romans and Reivers. Bookmark the permalink.