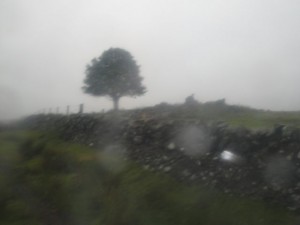 Jupiter Pluvius awoke and practised his art. The forecast was an inch of rain. Could we rise to this challenge? Should we? Unfortunately some form of chip-related affliction had already depleted the numbers, but two were found who dusted off their masochism and faced the challenge.

From the beginning we poured scorn on the rain by parking the car in a lay-by half a mile away from the walk rather than using the closer parking area. Having made our point however, we have decided that next time we will park closer.

Then off to Moffat, to change into wet weather gear in the bus-stop and purchase morale boosters in the local shop. Luckily they agreed to serve us despite not being locals.

We set off down to the River Annan and out of Moffat. The Roman road out of Moffat wasn’t exactly an archeological extravaganza but did allow us to muse on the reaction of a soldier in Rome being informed he was being sent to this area to build a road.

As we passed under the M74 there was brief shelter from the rain and we glimpsed the only other walker. I think she was just a local, perhaps on the way to the local shop. Beyond this was a pleasant wooded avenue which reduced the rain to next to nothing for five minutes or so. There mustn’t be much wind in it either because the ground was covered in autumnal leaves that must be from last year.

I had been foolish enough to think the rain had stopped but as soon as we left the cover of the trees I was disabused of that belief. The Crooked Road climbing up to Beattock hill was well placed to fill my waterproofs with perspiration. David obviously thought I was easily overcoming the hill and chose this moment to have me describe the Paraguay-Spain match in detail just to be sure I had no breath left.

We wondered where the Crooked Road might lead. I thought it would go to the Dalveen pass but on the OS it ends at the Crook Burn, in the middle of nowhere. It would be interesting to follow it and see if it connects with the paths leading to the Roman road from Durisdeer to Elvanfoot. There is a path heading from the Crooked road at Kinnelhead to Ae, but I don’t know if that is really a route or just happens to be forest paths connecting older roads. Looking into all this I came across the Heritage Paths website which could be a source for future walks.

Once we left the Crooked road, and the SUW, we spent half an hour or so walking into a moderate wind laden with rain. The picture above is from that section. We found one of the waymarker posts here lying on the ground having been blown over but David managed to replant it. The next waymarker post had had all the words and pictures worn off by the weather. By then I had made the transition from dry to damp. I had worn gaiters to see if my boots were waterproof. I hoped they had become wet on the Beeftub walk by water entering from above rather than gore-tex failure; sadly not. Perhaps it’s time for some more waterproofing stuff.

Having walked over a rather desolate hill top by Craigielandshill we approached a more wooded and sheltered area by Cauldholm where we crossed Kinnel Water and followed a well maintained tarmac path for a couple of kilometres before crossing the Kinnel again and entering Edwardsrig plantation. The trees here have been cleared and replanted so they are only about 3 feet tall. It will be interesting to see how quickly they grow.

The last section, not part of the Annandale way, was walking back down the A701 to the car. It proved to be further away than we remembered and it was no fun walking down a busy road. Eventually a blue P sign came into view and I sighed my relief. Until, that is, I got to the sign to find it read “Parking ¼ Mile”.

The route was easy to follow except for a short section near the A701 where we went astray for a couple of minutes. We’ll know next time.

Share this...
This entry was posted in Dumfries & Galloway and tagged Annandale Way, Low Level, Paths, SUW. Bookmark the permalink.