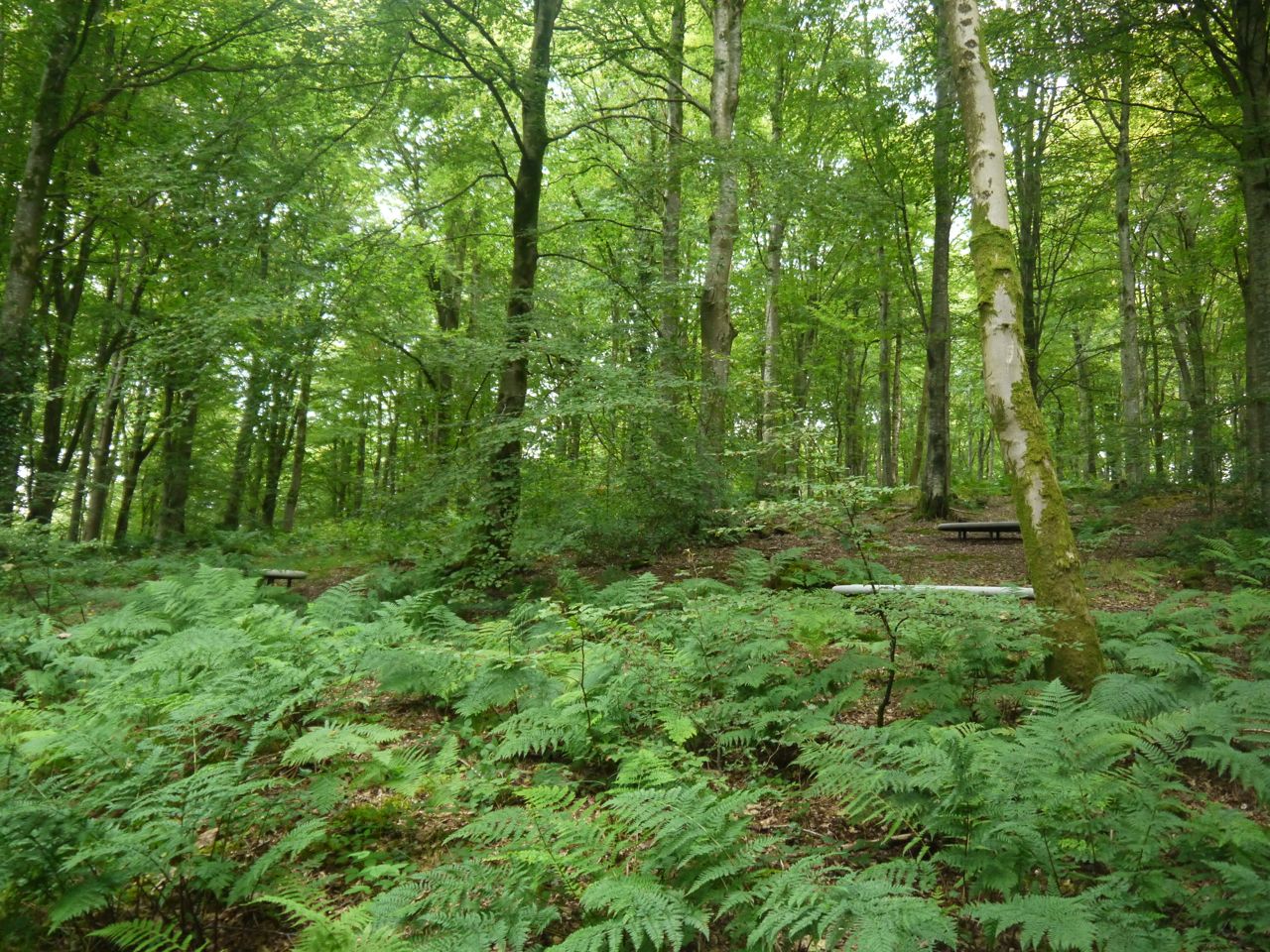 Cally Woods was the setting for the last of our Rosnes Bench outings. There are a number of waymarked paths here and we ambled along the Coronation trail, with a detour up to the Robber’s gate and then took the Motte trail.

Most of the walk is in broad-leaved woodland, mostly beech but with some areas of oak. The Bush Burn offered several paddling opportunities for the dogs and we found a few minor waterfalls. I decided against climbing down for photos since the ground was slippery (muddy), so you will just have to take my word for it. Wildflowers may be past their best now but there iwas still plenty of colour about and some new flowers for this year: a couple of varieties of hemp-nettle, and some marsh woundwort. The hedge woundwort also seemed plentiful.

The three Rosnes Benches, as is often the case, were not far from the car parking area. They are described as being on a leafy slope of beech trees, among the bracken, and so they are. We had wondered about climbing the slope to look for them in the deep bracken, but spotted them easily from the path. There is in fact a path up to them, presumably made by all the people walking up to them from the trail.

We spent a little time sat on the benches (indeed I tried out all three), listening, drawing in the scents of the forest, looking at the surroundings, touching the ground, and in Sweep’s case, digging holes. I didn’t exercise my fifth sense until later in the walk when I tasted the wild raspberries. I know Mrs Drow ‘n’ Smirr would say I was not exercising the sixth sense, common sense, in eating wild stuff, but it was a raspberry not a toadstool.

After the sensory experience of the Rosnes site, the Robber’s gate was a bit of a let down. I think I was expecting some sort of ancient archway, perhaps with heads on spikes, but it is just a gate, albeit with a gruesome history as explained on a forestry commission information board: “At or near this point on the night of 17 February 1819 a series of assaults and robberies were committed. The villains were eventually apprehended and sentenced to be hanged. In those days highway robbery was a capital offence.”

We passed a section of woodland which looked to have a haw-haw around it. I presume though since a burn runs along here that the wall had been built to guide the watercourse. The next find was a small old building surrounded by a modern fence. I spotted this through the trees and we fought our way through deep undergrowth, tall leaves of yellow iris (without flowers), but avoiding the water, forewarned by the splash of a dog, to reach it. Had we just carried on a little further we could have used the bridle path that passed it. The building is mostly below ground and contains a water tank. I’m not sure what it is but later on the walk we passed a Forestry Commission sign for “Fleet cold store” and I wonder if this might have been the actual cold store.

Later still we came upon signs by an old moss covered dyke explaining that this forested area had once been open land, Moat Park, enclosed by the walls to contain grazing cattle. The Forestry Commission bought the land in the 1930s and planted trees leaving the redundant stone dykes amongst the trees. It is interesting to think that the area had been so different so recently, indeed within my father’s lifetime.

Cally Motte was our last find. A large mound surrounded by trees is all that remains of this 12th century castle. There is a surrounding ditch and the mound’s banks are now covered in bracken except for a path to the top. The top itself is grassy. There is a large rock up here and a tree stump, both opportunities to sit and experience the setting. When in use this Motte would have stood in open land with commanding views. The modern views of the trees though, are still worth a visit. I think this would have been a better place for the Rosnes Benches but I suppose that would have been a problem for a historical site. I decided to sit on the tree stump and contemplate the area for a few minutes, Rosnes style, anyway .

Eddie decided to set off into the trees after a small bird which required some jungle trekking to get him back and by then it had started to rain so we headed back to the car. 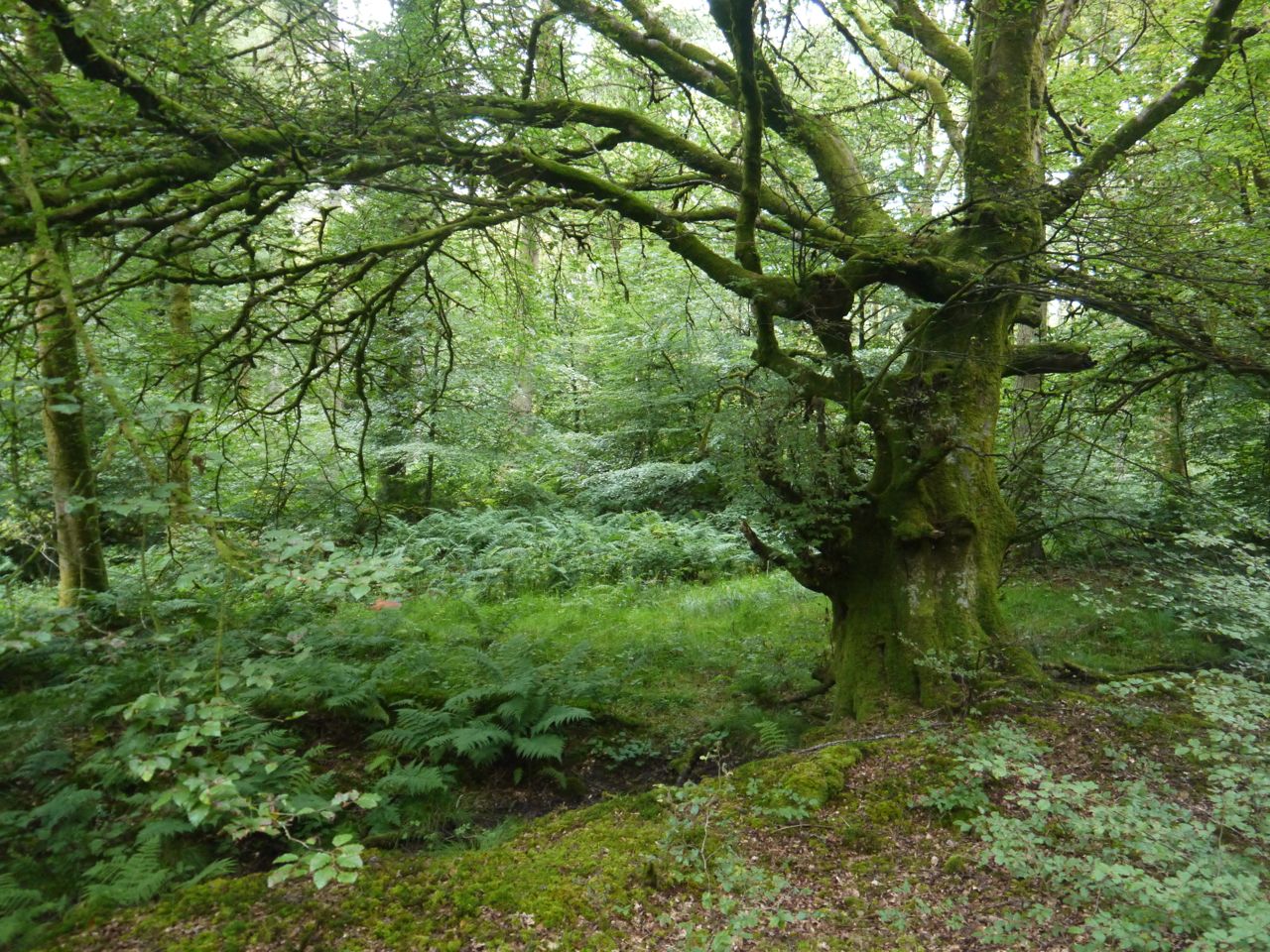 This completes our visits to the twelve Rosnes Bench sites. Some I would probably not have visited were it not for the benches, but each one has been an experience. It is all too easy to walk through woodland, across moorland or alongside rivers and lochs without pausing to consider the immediate surroundings. The benches have introduced a pause which has allowed me to experience those surroundings. My walks have also become slower as I spend more time looking around. 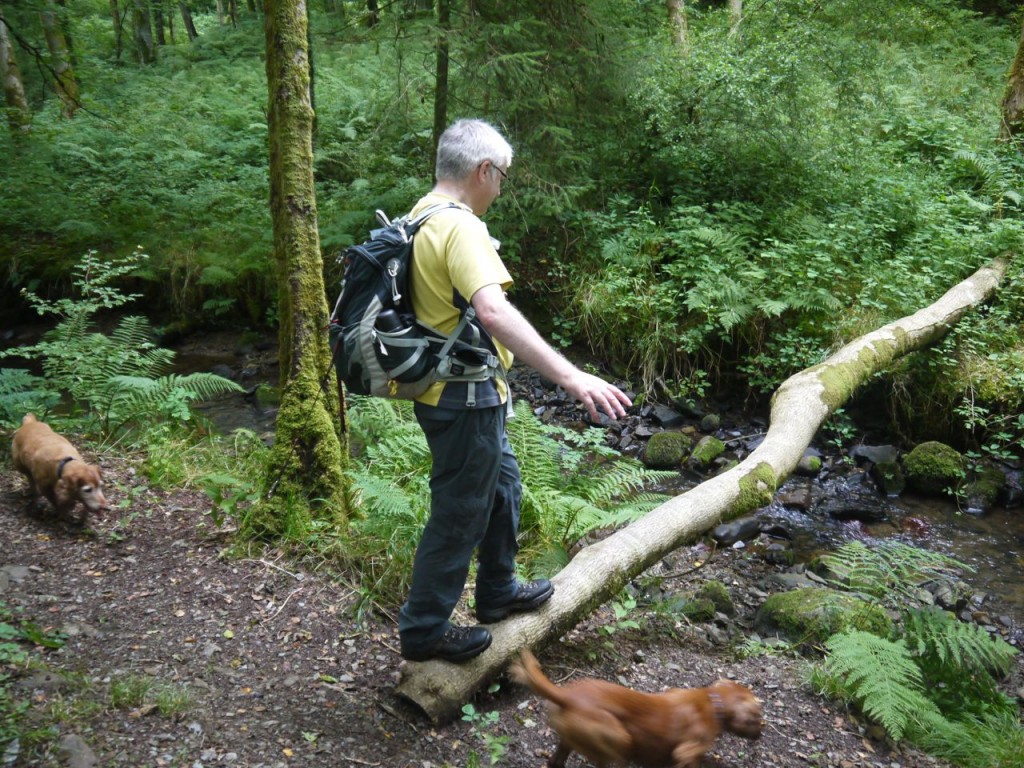 Share this...
This entry was posted in Dumfries & Galloway and tagged Rosnes Benches. Bookmark the permalink.