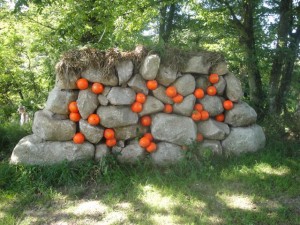 This was the best section of the Annandale way so far (in my opinion). I might be a little biased, of course, against the sections we walked in the rain. Or perhaps it was Vivienne’s presence that made all the difference?

Lochmaben’s lochside walk was pleasant and the woodcarvings were excellent. I hadn’t heard of Vendace fish before so I learnt something new, though I’m not sure it is of much use to me. I do wish we could have seen the ruins of Lochmaben castle but that’s a reason to go back sometime, I suppose.

At the beginning of a walk it is a time to reflect on one’s choice of gear. In retrospect I should have worn a long sleeved T-shirt, or have applied sunscreen, rather than leaving it in the car. Some had chosen shorts and others, longs. I wondered if my long trousers were a poor choice given the heat. The first four miles or so was flat but included wading through undergrowth and nettles (long trousers = good choice). Vivienne brought little equipment but did seem to have stowed an alternative top in Elaine’s rucksack. We were ordered not to look back as she changed and I now I have an inkling how Orpheus felt. We passed within half a mile of Heck.

I don’t want to bang on about Vivienne, but some things can’t be allowed to pass without comment: Responding to the question “do you want an apple?” with “what kind are they?”; holding on to David’s handle to get up slopes 😉 But the overall effect on morale was positive, I think.

We reached Hightae after about an hour and conversed with the natives while walking. Despite being offered incorrect directions we did find a waymarker and kept to the designated path. Though there were many markers and posts on this section, there were several occasions where the direction was not adequately signed. Perhaps this adds to the fun of the walk, but I can imagine being somewhat peeved if I walked miles off the path. Scapegoats would be strenuously sought.

After Hightae the Way started to climb passing the Mossburn animal centre and Rammerscales House before crossing Holmains Moor. From the slighly rough ground of the moor there is a good view over the derelict Holmains Manor with Joe Graham’s Monument visible on the horizon. We reached the monument at the top of the hill at about 2 hours and enjoyed the extensive views while resting and eating lunch.

Heading down from the monument was one of those places where the direction was unclear and waymarkers sparse. My internal GPS would have taken me the wrong way but an eagle eye spotted an Annandale Way gate. From there it was all downhill (except for the uphill bits).

There was quite a long stretch on minor roads, but with very few cars. This was mostly leafy roads with enough tree cover to prevent us getting too hot. There even seemed to be some plantations of deciduous trees and you don’t see many of those. Another hour had us at Wiliamwath bridge over the River Annan.

The way then follows a woodland path alongside the river before rejoining the minor roads and passing St Mungo’s Church. Though I don’t recall seeing the church from the road, just a sign to it. The way then went off road, along a forest track and met the Annandale Way leg from Lockerbie.

The next bridge was over the Water of Milk, which was decidedly brown in colour and not at all like the blue River Annan. The riverside walk here was busier with twitchers and family outings. There was a strange monument of rocks and orange floats (see the picture above) here but I don’t know what it is. Any ideas?

In the final few miles we could not see our destination, Hoddam castle, but Repentance Tower above it was visible and gave us an idea of how much further we had to go. No one mentioned it to Vivienne, whose psychological requirement was for us to be “almost there”. Our final bridge was over the Annan into the grounds of Hoddam Castle. Since we were a little behind schedule and there was a train to be caught we made do with bottled water rather than the usual feast.

PS We managed a good 45 minutes before anyone asked “are we there yet?” Thanks, Andy.

Share this...
This entry was posted in Dumfries & Galloway and tagged Annandale Way, Paths. Bookmark the permalink.