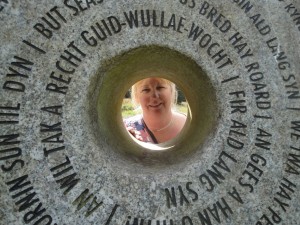 A nice easy walk, starting at the 7-stanes Trailhead car park about a mile and half east of Newcastleton.

My schoolboy error was to take a monochrome copy of the Newcastleton cycle trails, rendering the numerous coloured trail markers somewhat less useful than they might have been. But by hand-railing I got us where we needed to be. The dogs had to be kept on leads because there were sheep wandering across the track near the car park (and because Leo tends to do a runner if he catches the scent of deer). God knows what he would do if he found himself facing a deer five times his size.

The basic route is purple on the trail map, and is I think called the Linns Route. Certainly that was what was on many of the way-markers. Rather than follow this completely we took a single track path along the dry stone wall just after the cattle grid where the Caddrouns trail heads off east. This took us down to Hillhouse wood where the path was a little muddy until we rejoined the Linns trail. There was the first of several picnic tables here but sadly we hadn’t brought sandwiches.

This route took us down and across the Tweeden Burn then slowly climbed, parallel to the burn, until we reached the Border Stane, which is about a mile from the actual border. The side facing England is inscribed with Blake’s Jerusalem, whereas the Scottish side has Burns’ Auld Lang Syne. We would have “pood the gowans fyn” but there were none thereabouts. I would of course be careful to pick but not uproot any wildflowers (illegal, I believe). Those daisy chain makers should all be banged up if they uproot the plants, shouldn’t they?

Other than the section in Hillhouse Wood the paths were well maintained and would be good in any weather. There were plenty of thistles about and we came across a peacock butterfly that let me close enough for a photo.

We nipped into Newcastleton after the walk for some sustenance then headed back to D&G. On the way home, just after crossing back into D&G we drove through Rowanburn, an old mining village which has a couple of interesting artefacts by the roadside.

There is a stone statue of Lang Sandy. This replaced a wooden statue that had been there for many years but was apparently beginning to deteriorate and was moved to a museum in Langholm. Lang Sandy Armstrong was a powerful Reiver who was executed with eleven of his sons in 1603 in the ‘pacification’ of these parts. Across the road from Sandy is a pit-head wheel, a memorial to Samuel Lindsay, killed in a mine accident in 1922, just a few months before the last mine closed.

Share this...
This entry was posted in Borders and tagged 7stanes, Low Level, Paths. Bookmark the permalink.