Romans and Reivers: 4 – across the White Esk 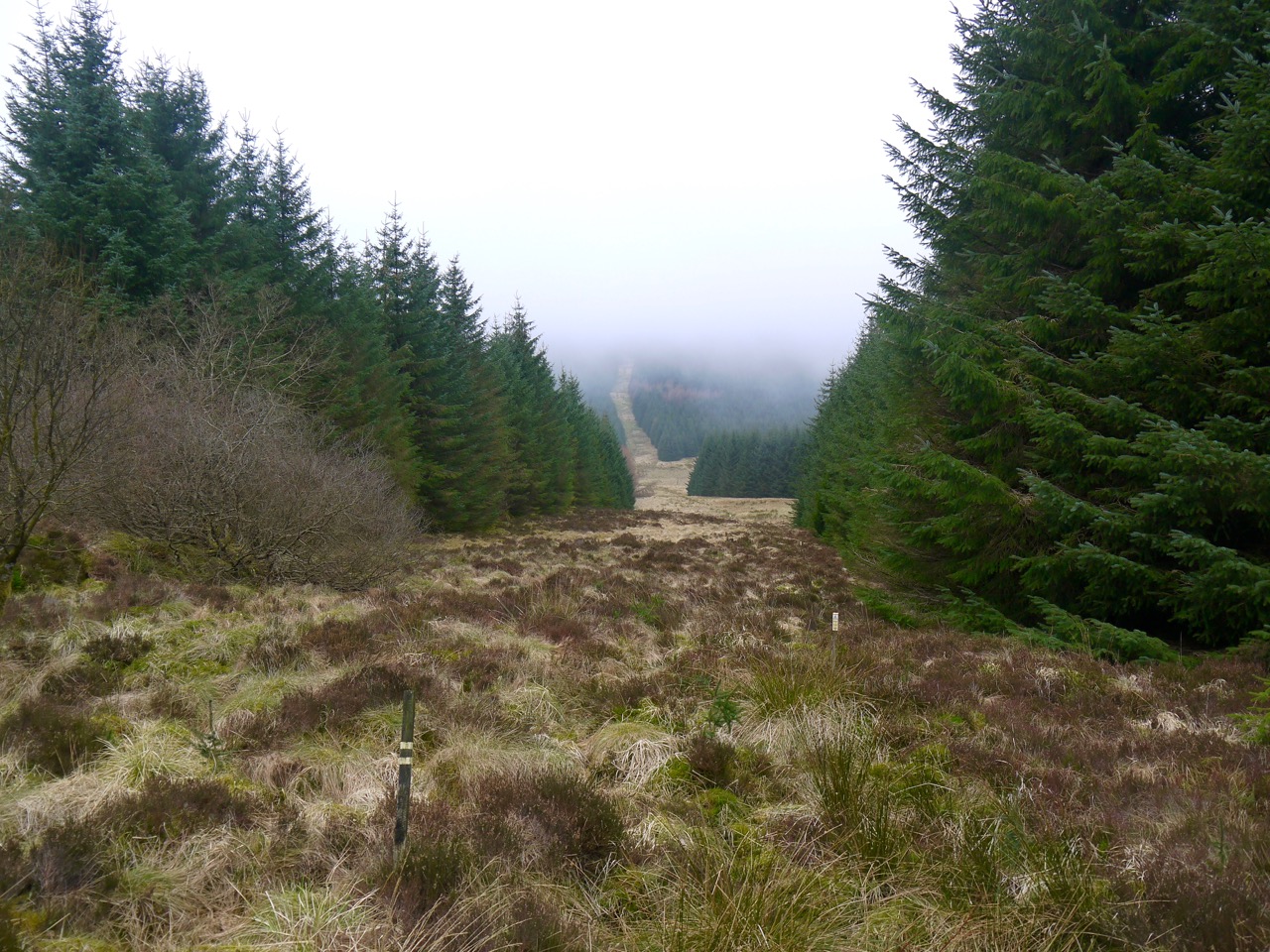 My original plan had been to walk from Garwaldwaterfoot to Craik Forest, a linear walk of about 10.5 miles, but getting there with cars at each end would have meant five hours of driving, so instead I split this section into two circular walks and this was the first. 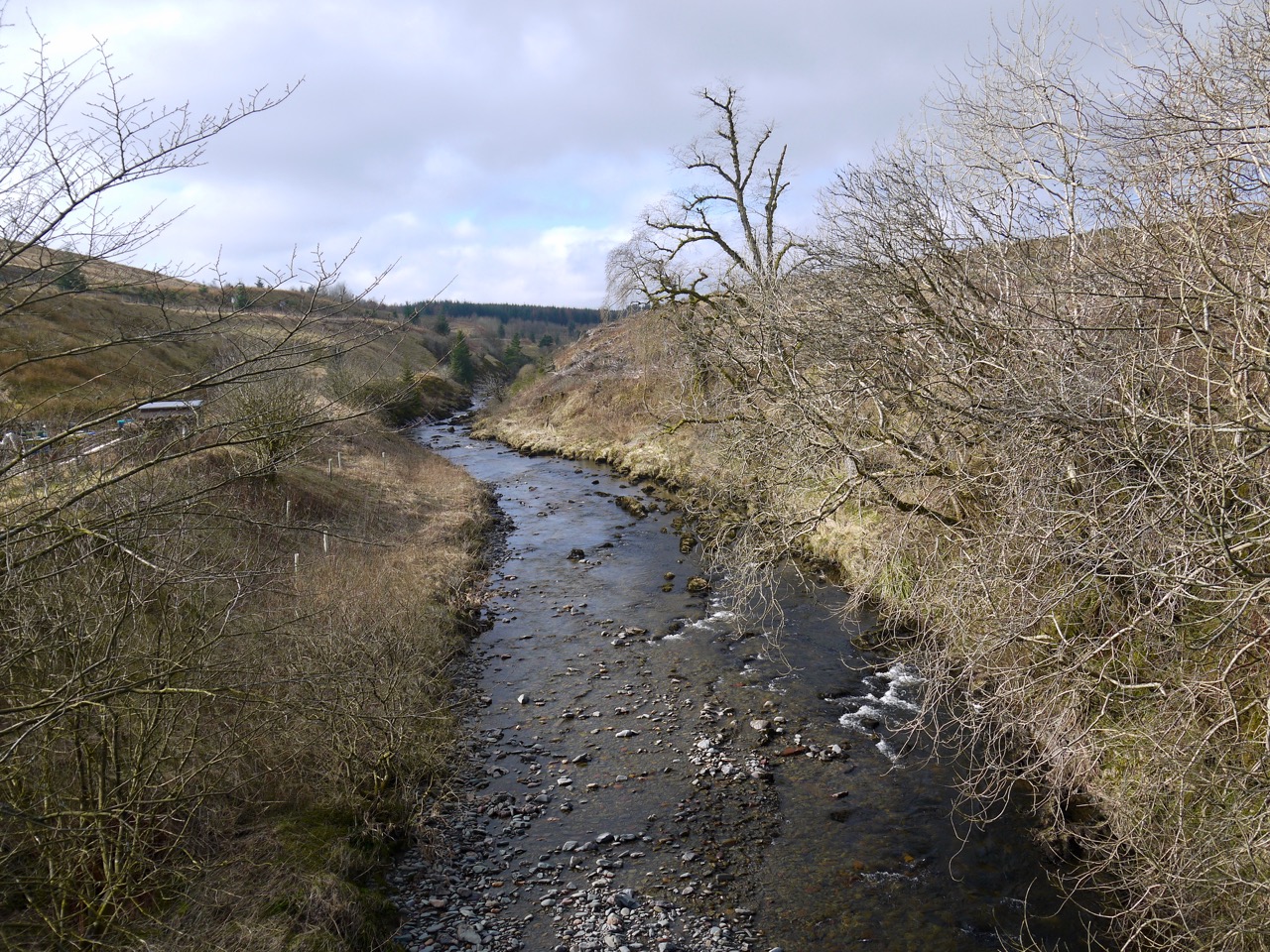 We parked at Garwaldwaterfoot in a small lay-by and set off walking along the B709. What I did not realise at this point was that the route of the R&R as marked on the OS map, and the SOCT website differs from the way marked path.

At an R&R sign we left the road for a forestry track, with me believing we were at Dumfedling, whereas we were at Tihill. We crossed the White Esk and followed the R&R signs. The route in my mind, and on the map, was north and then east without any junctions in the first 3 miles. 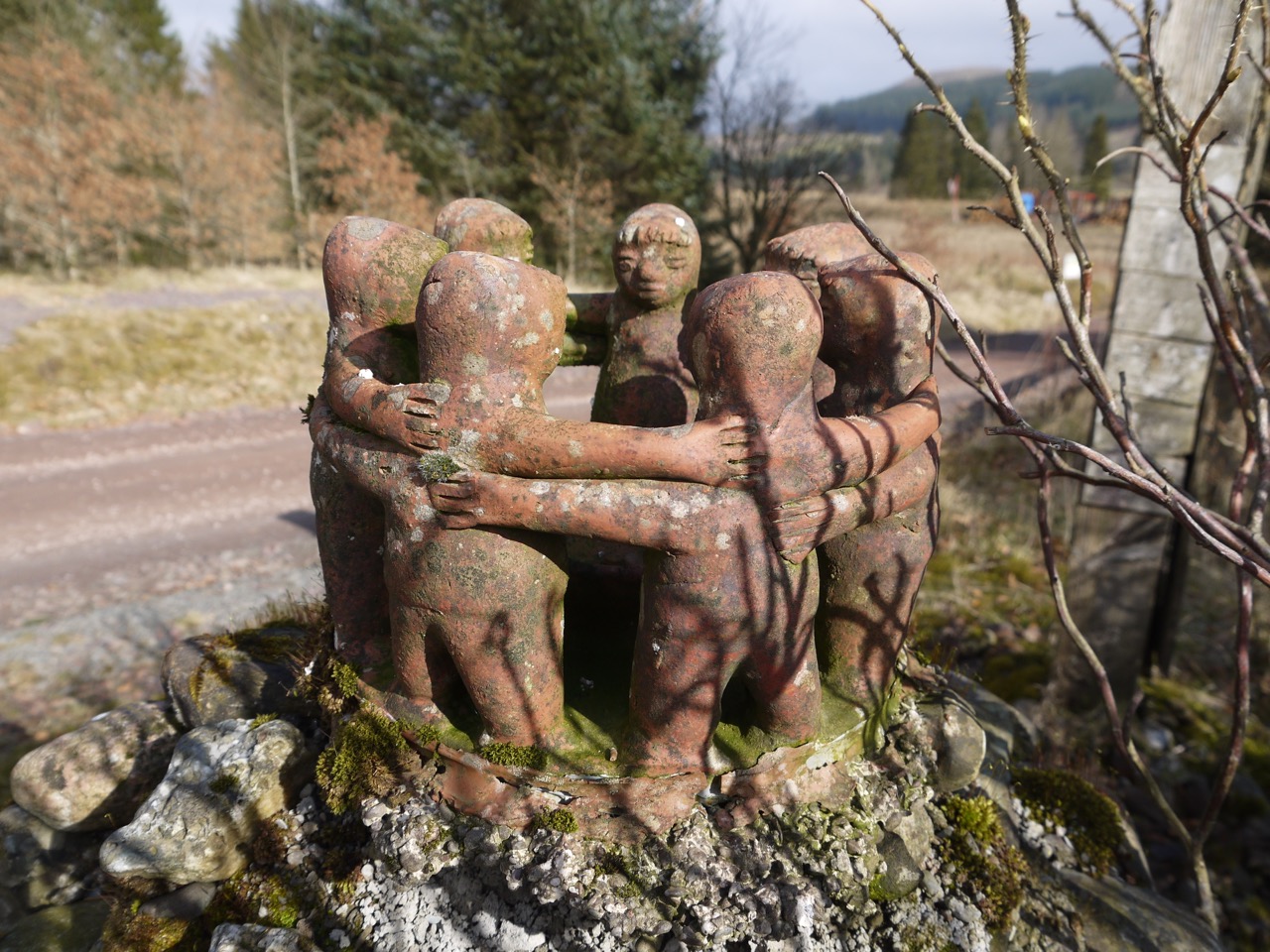 So I was perplexed to find I was walking towards the sun. Then we came to a track off to our left with a Scotland Countryside Trail sign pointing left. But not an R&R sign. A large solitary Larch stood by the junction looking quite different from the larches one sees in forests.

Was this the R&R or a different route? We decided that is wasn’t the R&R … but it was. We walked on. Unfortunately there was low cloud so we couldn’t use hills to get our bearings and forest all looks much the same but after a mile or so it things didn’t seem right so we turned back and took the track at the signed turn.

We presumed we were on the track that passes on the eastern side of Dumfedling Hill and expected to rejoin the R&R to the north of the hill. Then we walked past an R&R marker, which rather than reassuring us, just confused us further. By the time we joined the track about 500m from Aberlosk it was clear to us that the R&R is not as marked on the OS map. 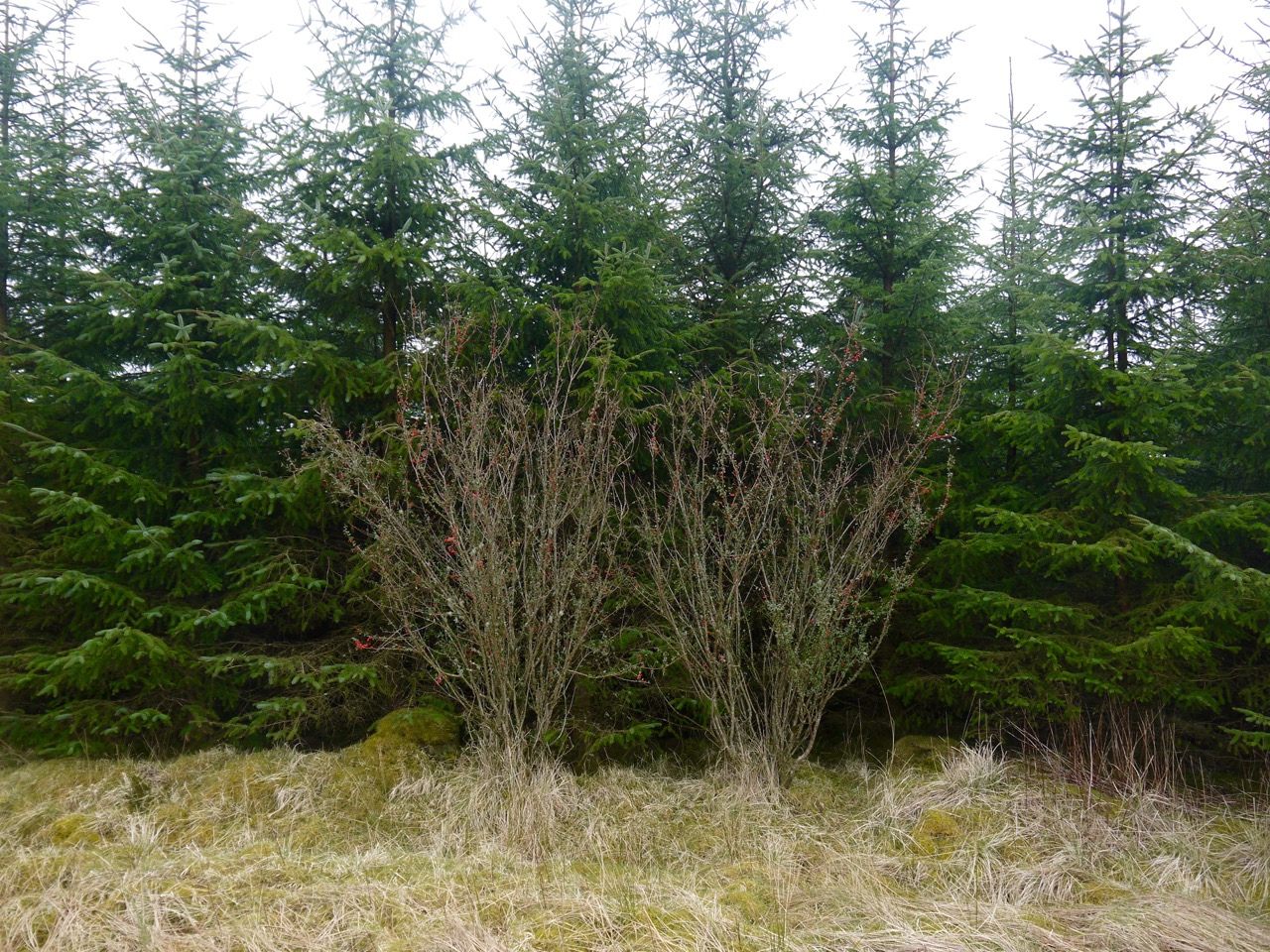 The views here could be written off as just forest, but in fact offered quite a variety. We had newly felled, old fell, young and mature trees. It was interesting to see the different shades of green: the bright light green of space saplings, the blue green of mature spruce, the green of pines (pine green?), and the contrasting orange tinged spring larch, and purple tipped spring growth on birches. There was fungus growing on felled trees and yellow coltsfoot by the track, and out of place here in the forest, several cotoneasters. 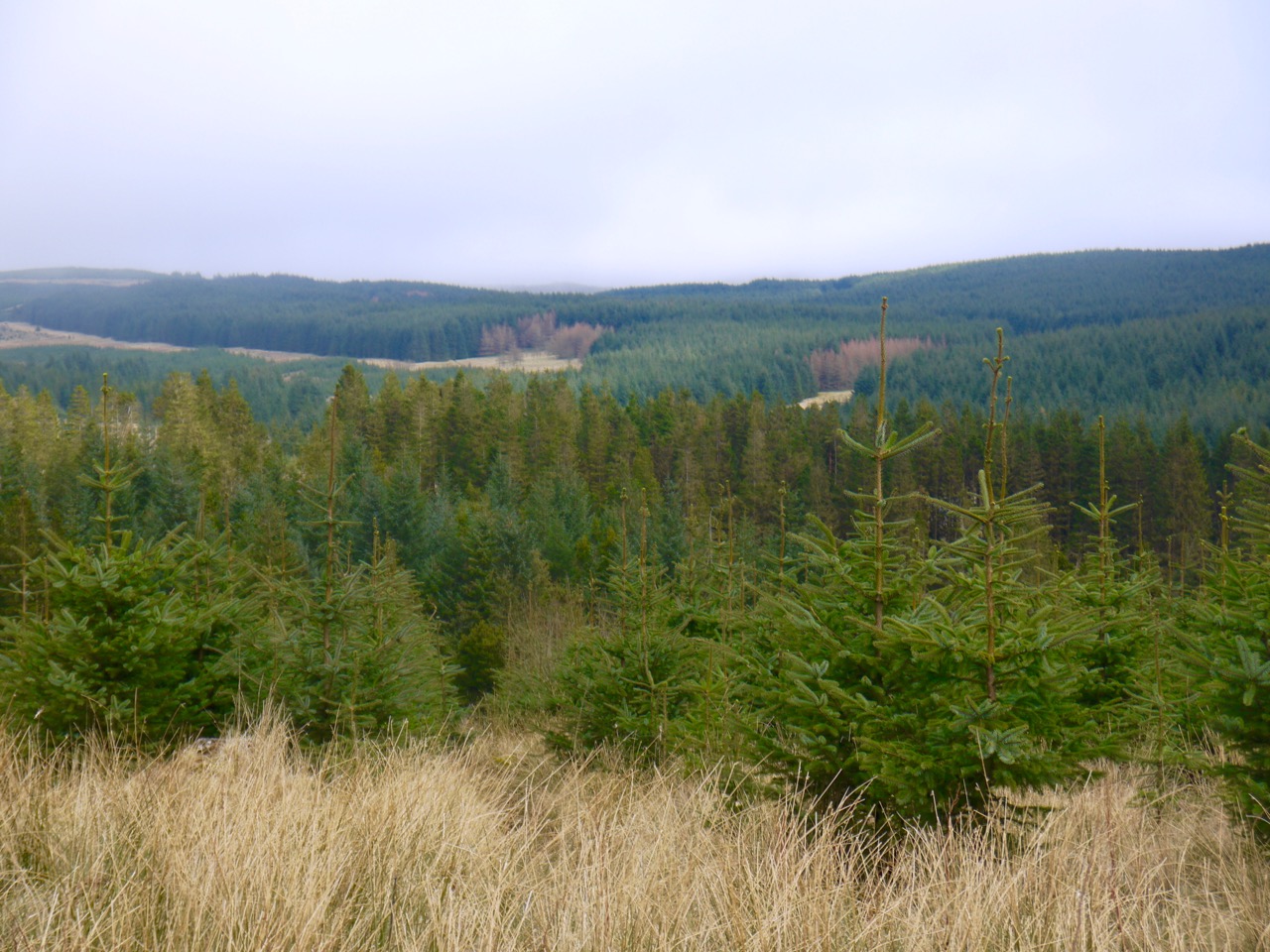 Aberlosk has a cottage that looks recently done up, a barn that looks serviceable but rusty and a sign covered in lichen. We were back on the mapped, and way marked R&R and crossed Aberlosk burn on a bridge of wooden planks. This track then heads up over Langshawburn Rig, but we turned right along the forestry track that contours round to the Archie Grain. Grain (from the old Norse grein) means a fork or branch and is usually applied to a small valley opening from another, but here seems to describe the burn itself.

The R&R crosses Archie Grain on a small bridge. A sign post beyond the bridge had faded completely but there didn’t seem any other way across the burn. Once across the water we were on a track with much less sign of use. It was overgrown with grass and heather. Creeping clubmosses stretched onto the track looking like fir trees that had been flattened by a steam roller. And as we walked on, first saplings were encroaching, and eventually we were pushing aside branches of more mature trees as we walked along the path. 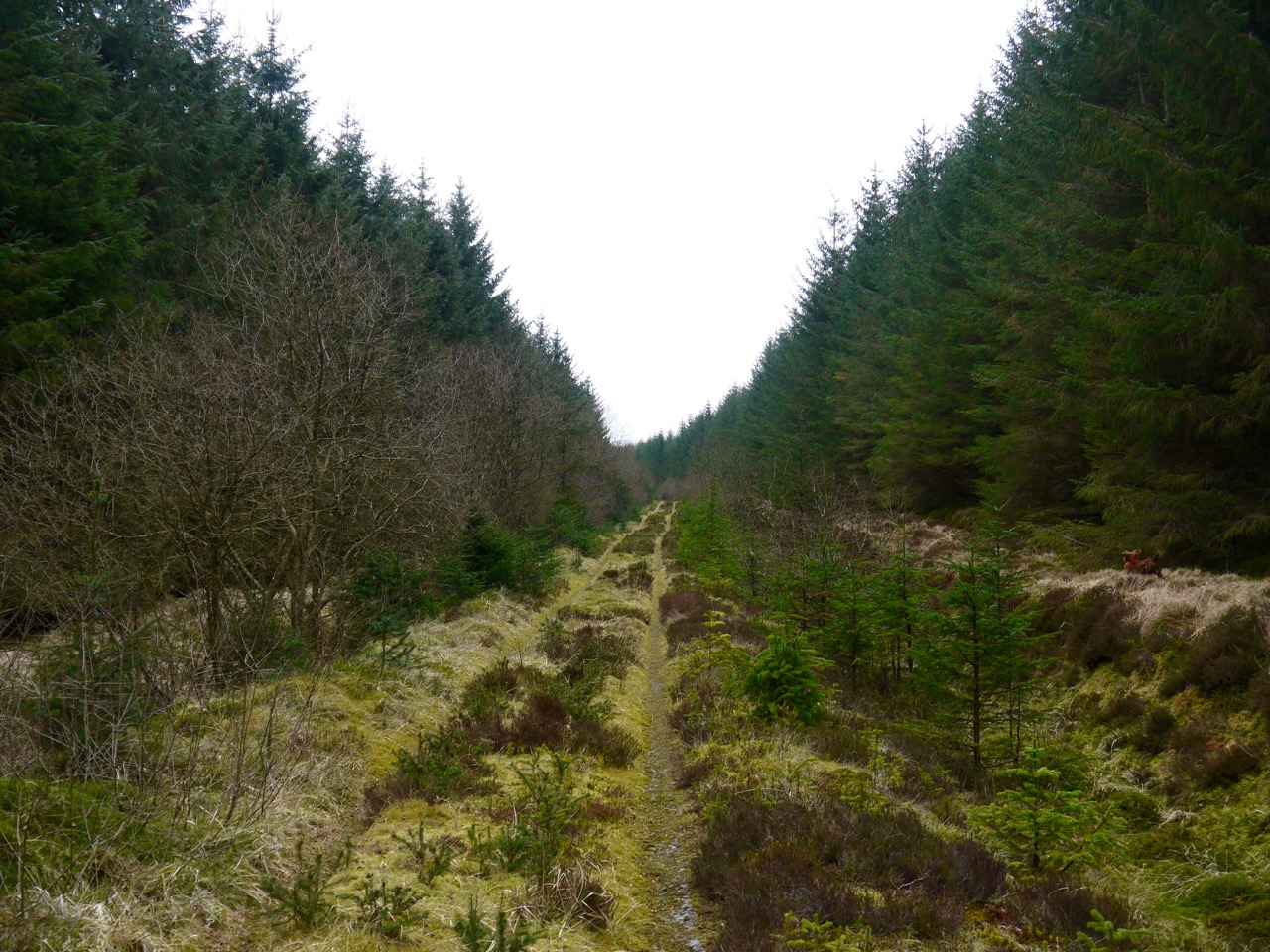 The path climbed slowly and took us into the damp and mist of low cloud. At one place was what appeared to be a rounded dyke beside the path, perhaps the remains of an overgrown quarry that had a burn beside it?

The main track, if one could call it that, ends at a quarry (reclaimed by the forest) and continues as a single file footpath at risk of being swallowed by the forest. An information board told us we were about to walk in the footsteps of marching Roman soldiers. It also showed the R&R route, as we had walked it, rather than as shown on the OS map. 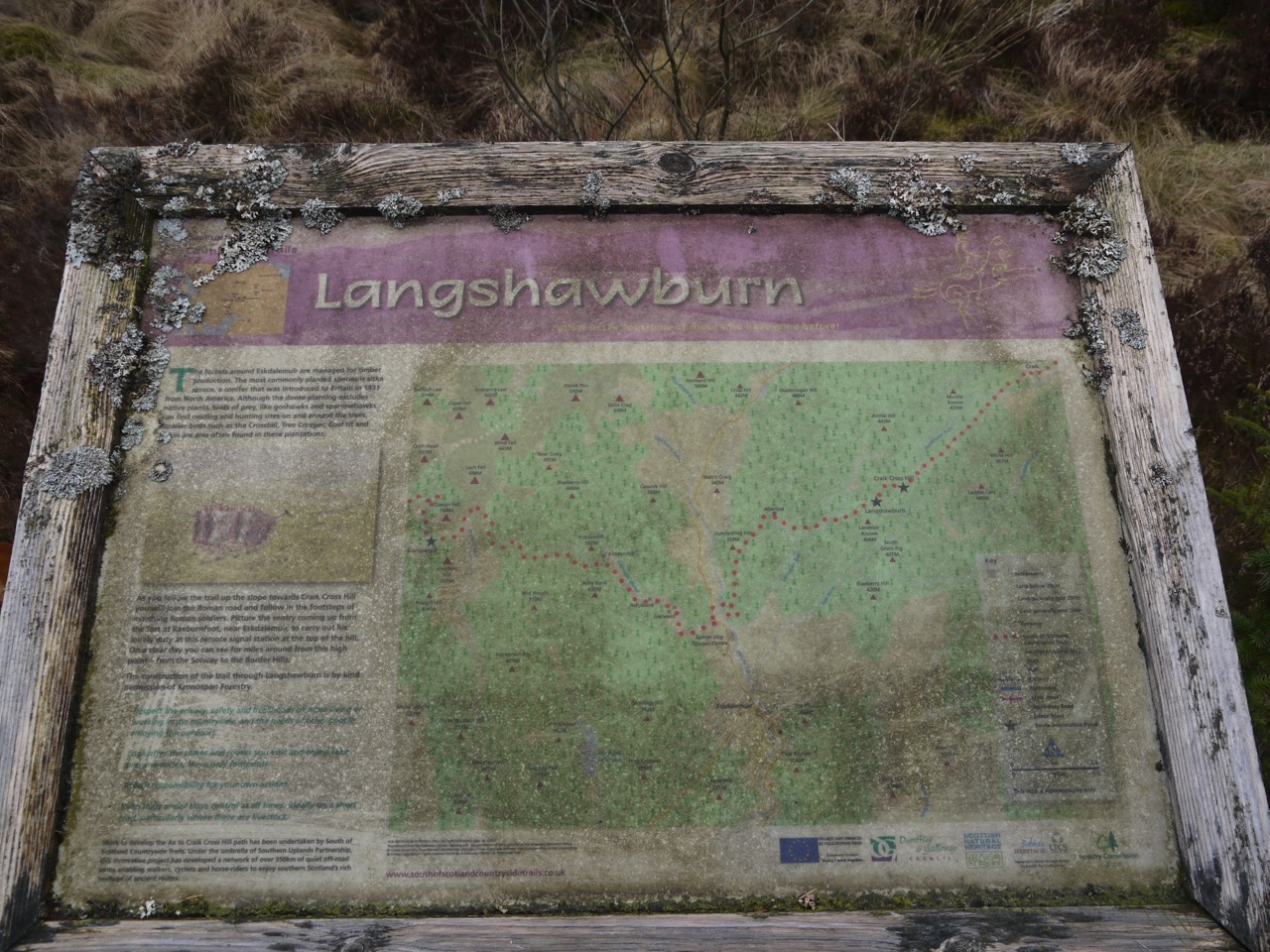 We walked on in the footsteps of those Roman soldiers, the gradient picking up a little until we reached the long forest break that marked the route of the old Roman Road. I had thought we might use it as our way down but the terrain looked to be heavy going.

The summit of Craik Cross Hill has an information board explaining that a Roman Signal station once stood there. We stood at the summit in low cloud unable to see particularly far in any direction, sympathising with the Roman soldiers who might have marched all the way up here despite being unable to see or send any signals. 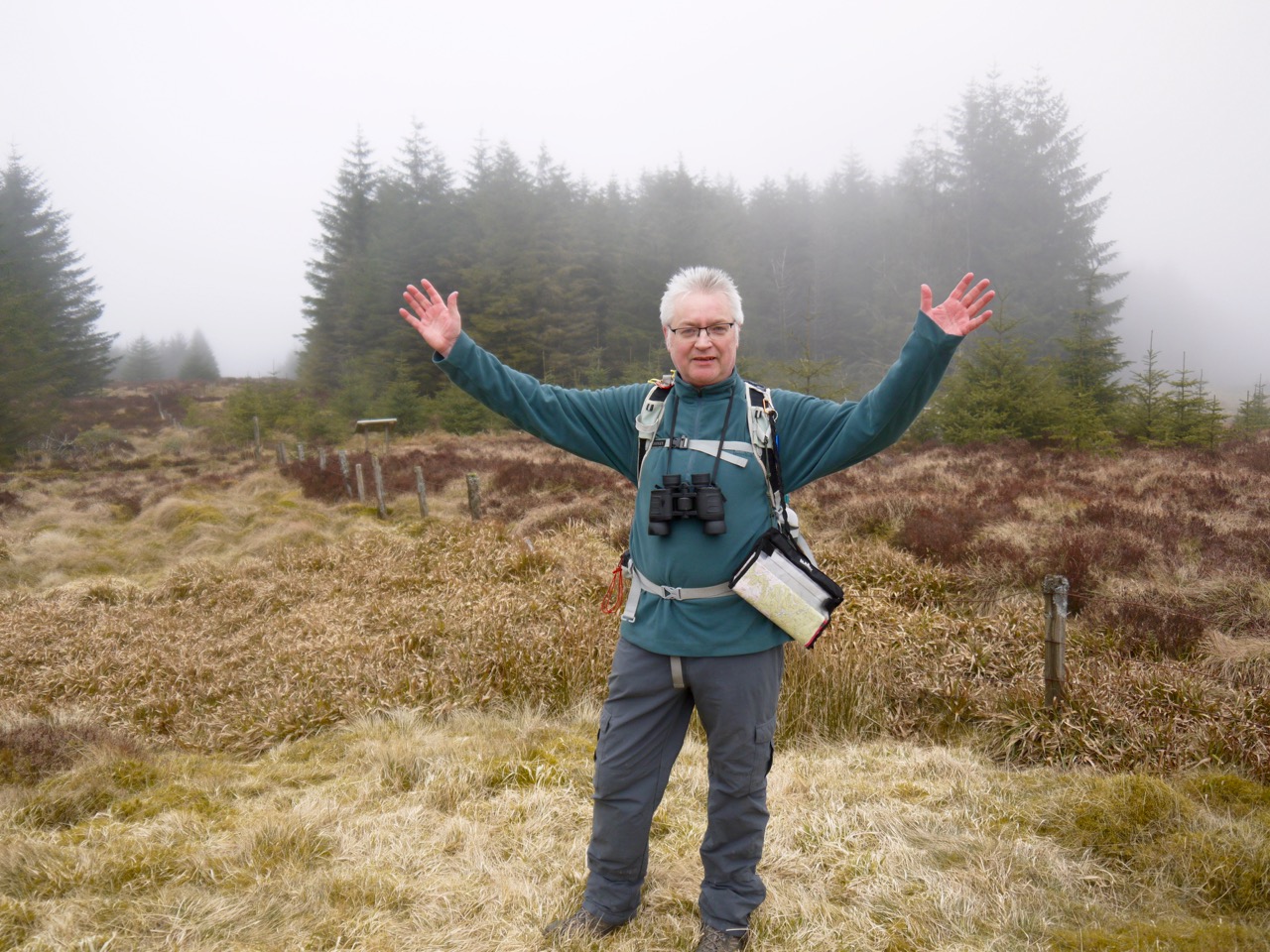 Rather dilapidated fence posts mark the both the county boundary and the watershed between waters flowing into the Solway and the North Sea.

As I mentioned, I had thought we might follow the Roman road down, but instead we retraced our steps as far as Aberlosk and then walked along the route as marked on the OS map along the western side of Dumfedling Hill. This gave us views across the valley of the White Esk. There didn’t seem any particular reason that the R&R couldn’t have come this way. I suspect the route has been changed to reduce the distance walked along the main road. 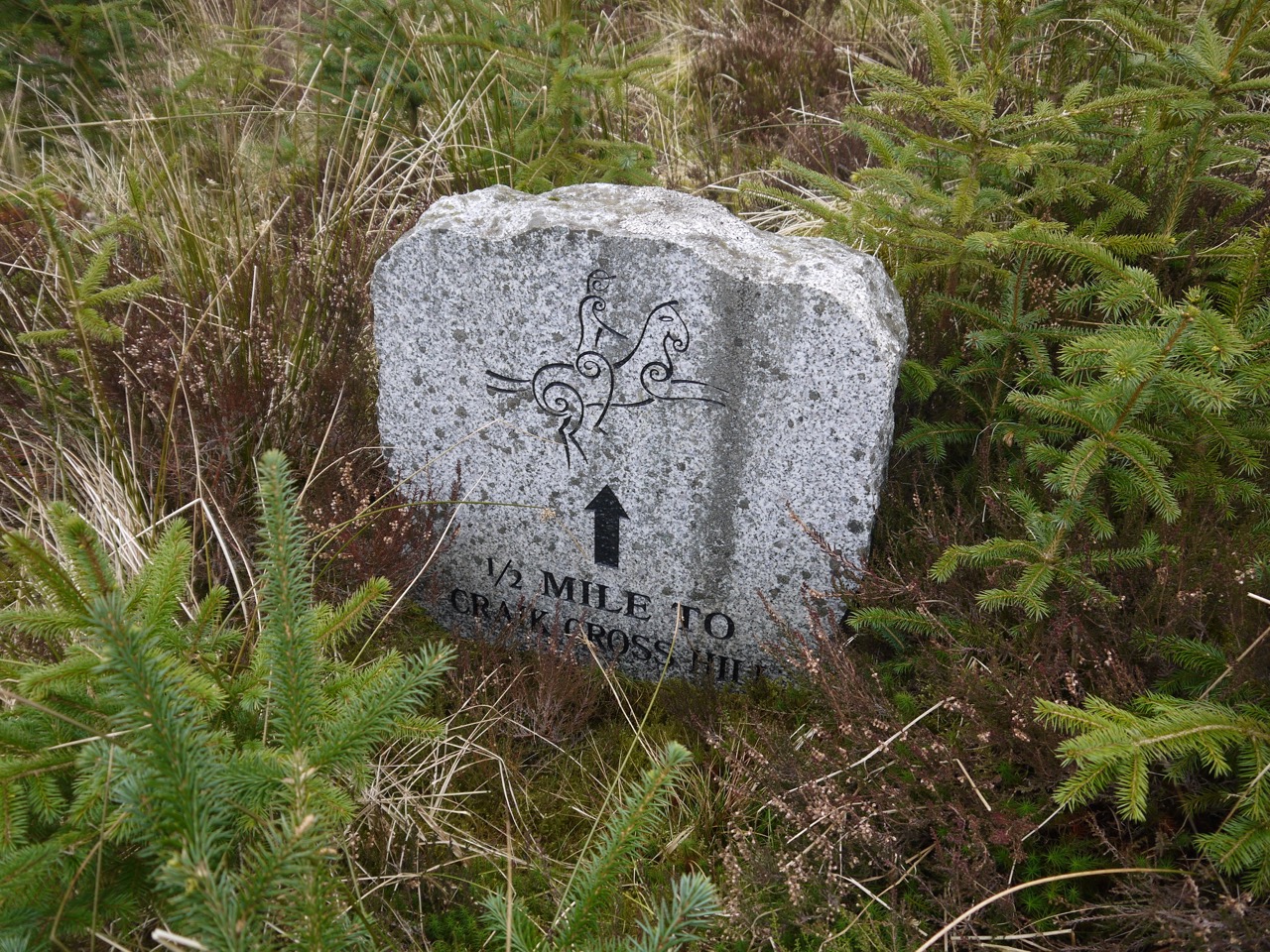 P.S. I  realise that I haven’t told the tale of the rucksack raider… The wind had been cold enough to prevent us stopping for lunch at the summit, but we found a sheltered spot near the R&R stone marker on the way down. Audrey ate half her sandwiches then put her sandwich bag back in her rucksack. The next time we saw it was in Eddie’s mouth, and he wasn’t for giving it up. As I tried to wrestle it from him, Sweep though it was a game and grabbed the bag as well. The result? I got the plastic bag and mushy bits of the sandwich contents, Eddie got the bread, Sweep had the joy of taking part and Audrey lost a sandwich.

Share this...
This entry was posted in Borders, Dumfries & Galloway and tagged Romans and Reivers. Bookmark the permalink.