Romans and Reivers: 3 – through the cave of sorrows 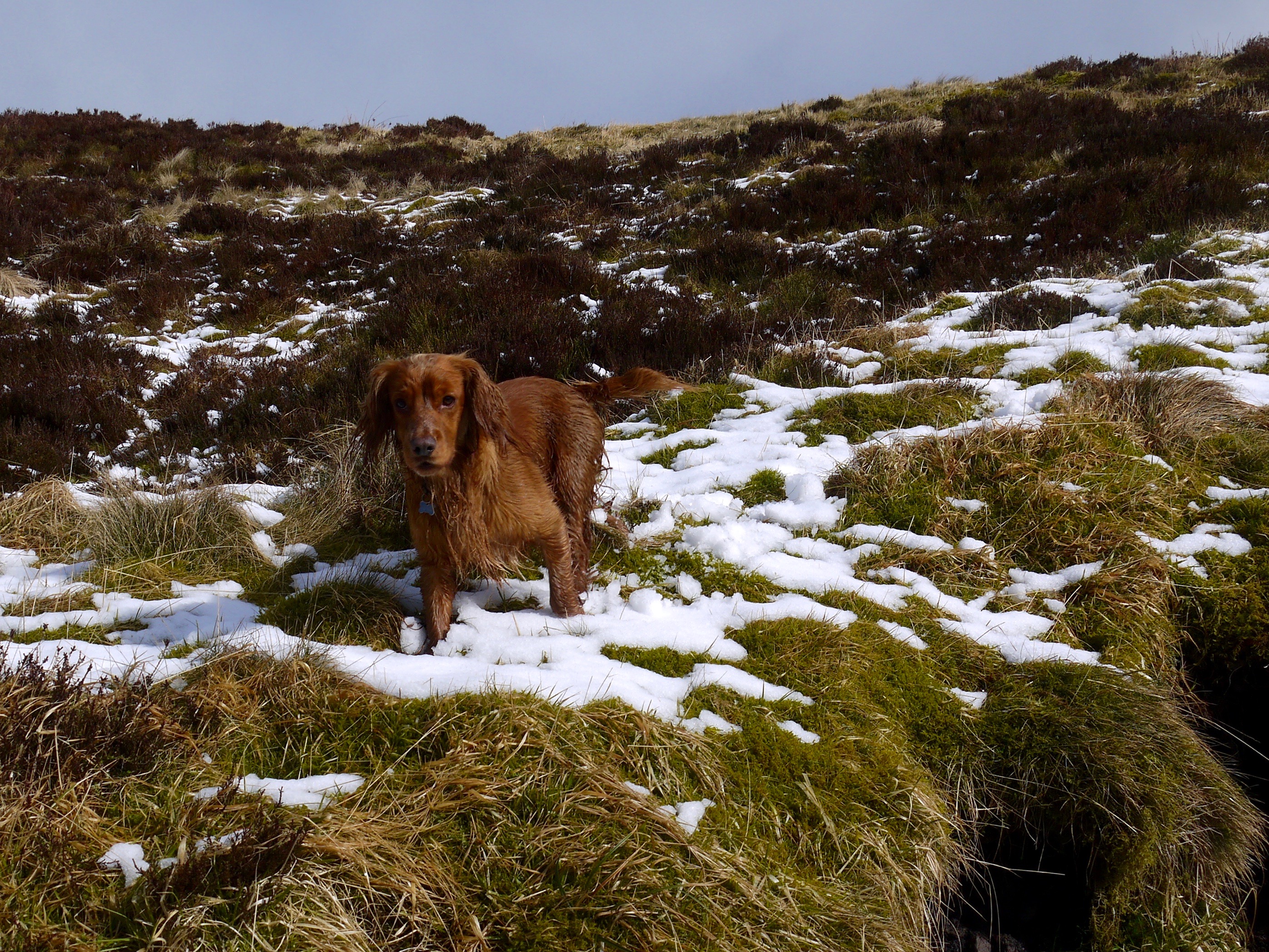 This, our third Romans and Reivers walk, took us from Moffat Dale to Eskdale, passing through the valleys of Wamphray Water, Dryfe Water, and Garwald Water, and past the half way mark for the entire route. The first three miles or so are a gentle climb, the second three miles a gentle descent then steep climb, and then it is “all downhill”, as they say.

Having left a car at each end of our planned walk we set off from the A708 to walk down to the R&R route near Bellshaw Pool. The farm track then follows Moffat Water a short way before turning right up the hill. We paused to look along Moffat Dale, a snow-capped Bodesbeck Law raising the possibility that we might meet snow on higher ground. The track has a locked gate, but no adjoining fence so we could walk around it but this did involve getting mud on my boots, and the dogs. The nearby “Stop” sign now lay on the ground. 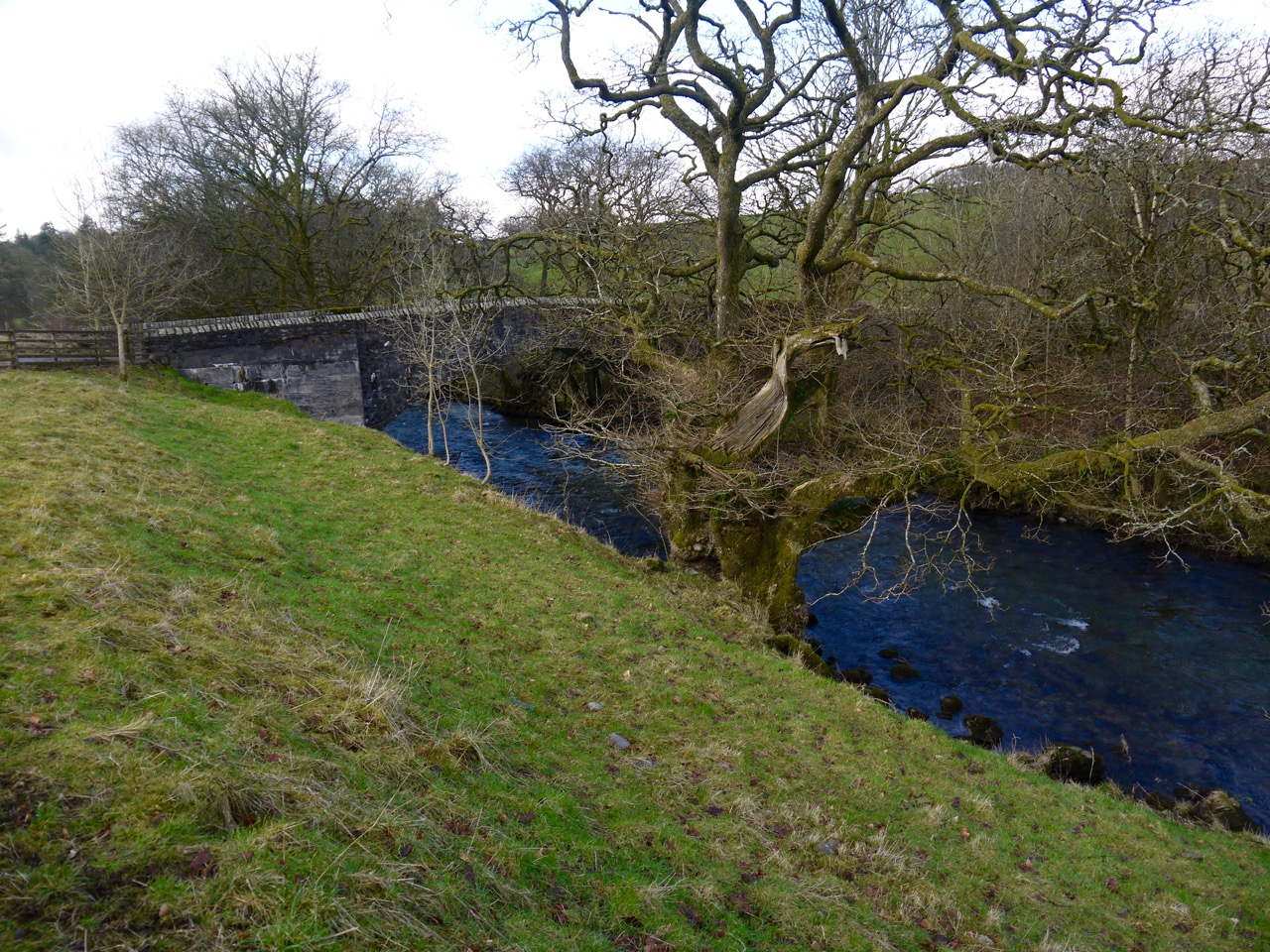 The last time we were here there were sheep, llamas and cows, but this time the fields were empty. But the dogs had to stay on leads because the track here has several cattle grids. I worry that the dogs will break a leg if they run across these. They don’t seem worried about being on a lead but having a dog on a lead does make photography a little trickier.

At the cow shed we were high enough to see across to Queensberry to the west and Saddle Yoke to the east, also capped with snow. Negotiating the gates here I spotted a purple Romans and Reivers plaque for the first time. I would have missed it if I had danced across the cattle grid. 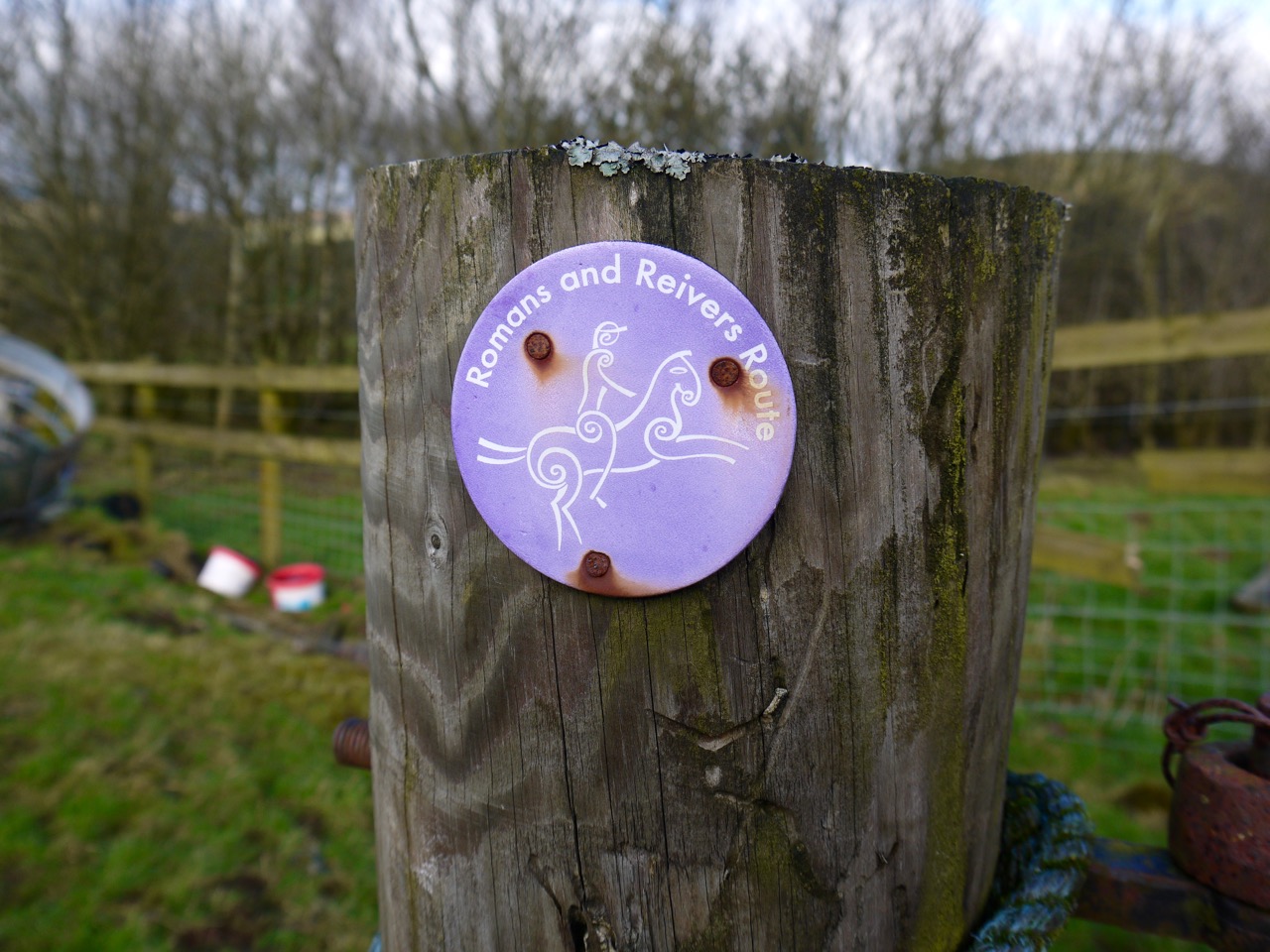 The track crosses some moorland, reaches the trees then follows the Cornal Burn. There has been a great deal of forestry felling since we were last here, opening up the views. I remember walking along here able to hear but not see the burn, whereas now it was clearly visible. There was a brief stint in mature forest when the track turned south but having crossed the burn we were once more in open country. Dry Gutter climbed up to Craigbeck Rig on our left,  a memory from the SUW walk. Several new plantations of saplings were scattered across the valley, with the new growth of larch and birch adding orange and purple to the green of the forestry spruce.

The stone lions at Craigbeck Hope watched us, unblinking, as we approached but didn’t turn to watch us walk away. Within the grounds was a pond with an island and a bridge, the water an usual green colour like pea-and-ham soup. 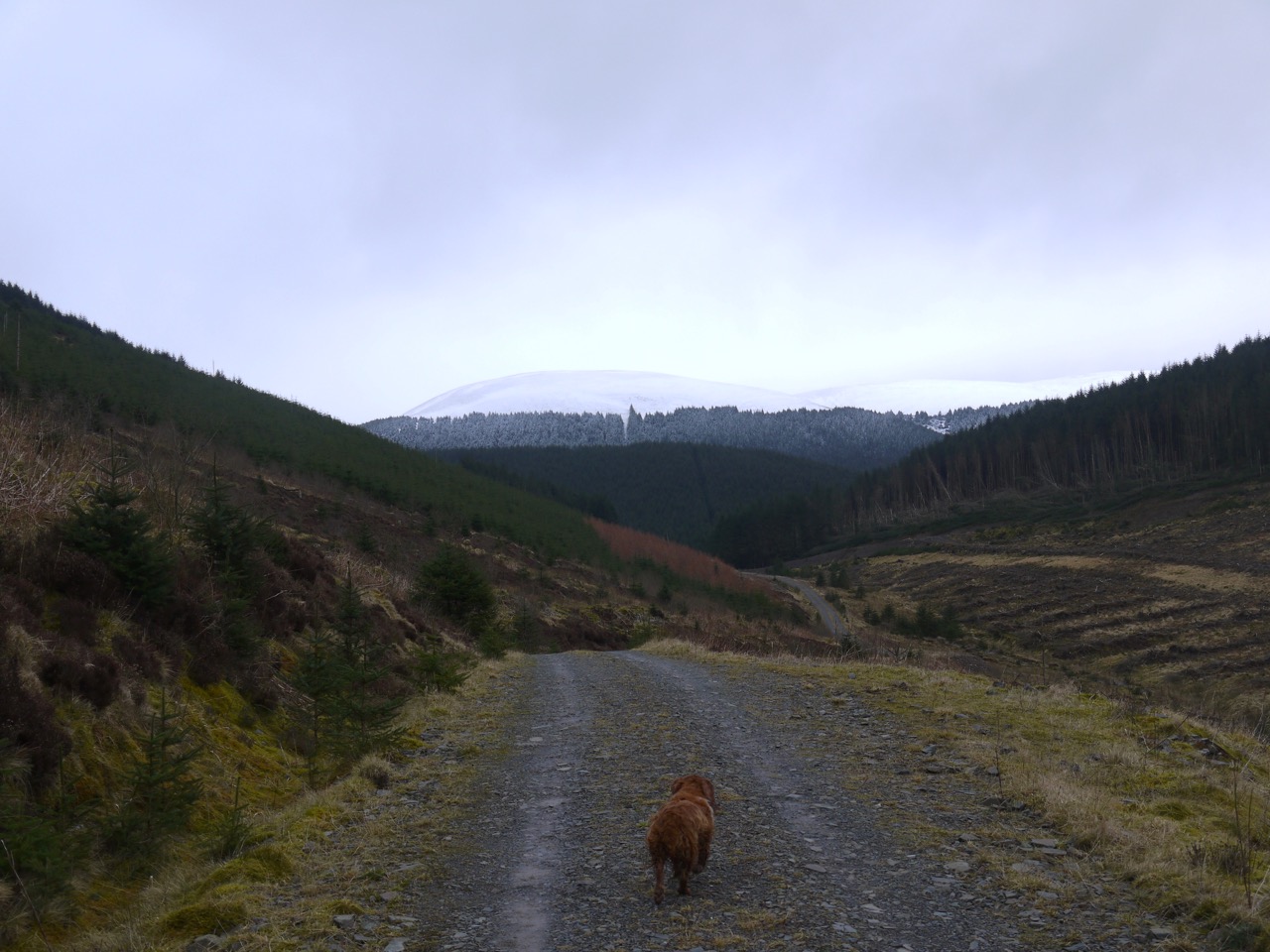 Loch Fell in the distance

Beyond Craigbeck Hope the track begins to descend then winds beneath the forest of Birch Hill, high above the valley floor of Birch Sike. A side is a stream in boggy ground, which is probably still the case, but the trees here are now conifer rather than birch. In the distance the we could see snow dusted forest below a snow covered Loch Fell. I can believe that Birch Sike once ran amongst birches in the boggy ground, but Loch Fell is a strange name for a hill that does not have any lochs within 8km of its summit.

At an R&R stone, marking 7 miles to Beattock, and 8.5 miles to Eskdalemuir, the SUW and R&R part ways. The SUW follows Wamphray Water upstream in the narrow valley between Birch Hill and Knucklegill Shank, a cracking name if ever I heard one. We continued on the R&R which follows Wamphray Water downstream. This entailed quite a dogleg, walking upstream, crossing Wamphray Water and its tributary, Knuckle Gill, then heading downstream. A zip wire across the valley could have saved a deal of walking, and added some extra excitement. 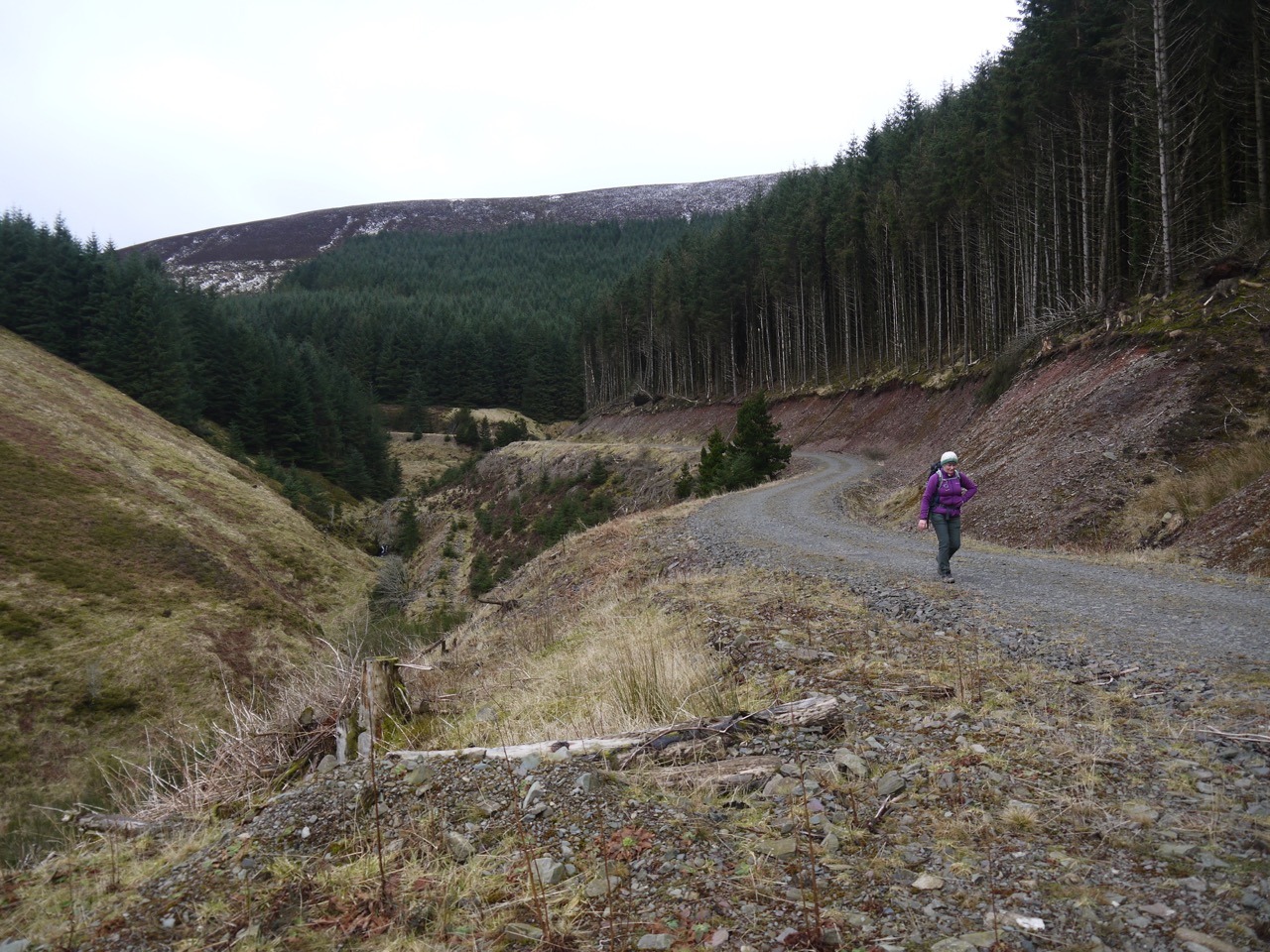 The flat bottom of the valley here has several sheepfolds among the heather, but it looks to have been a long time since sheep sheltered there and there are now saplings growing in the sheilings. It is a peaceful place.

Wamphray was originally uiam phraimh, which means cave of slumber, or perhaps sorrow. I’m not know if there is an actual cave somewhere near Wamphray itself, but I could imagine this valley being seen as a place of solitude or serenity, perhaps even more so before the forestry tracks, sheep and conifer plantations.

I had thought that the track was continuous all the way down the valley, and spent my time, when not distracted by snowflakes, looking out for the path that would take us up Garrogill, so I was surprised when the forestry track we were on ended at a large turning circle. At first we couldn’t see the way to go, and this was the first time on the R&R that we did not have good waymarkers. 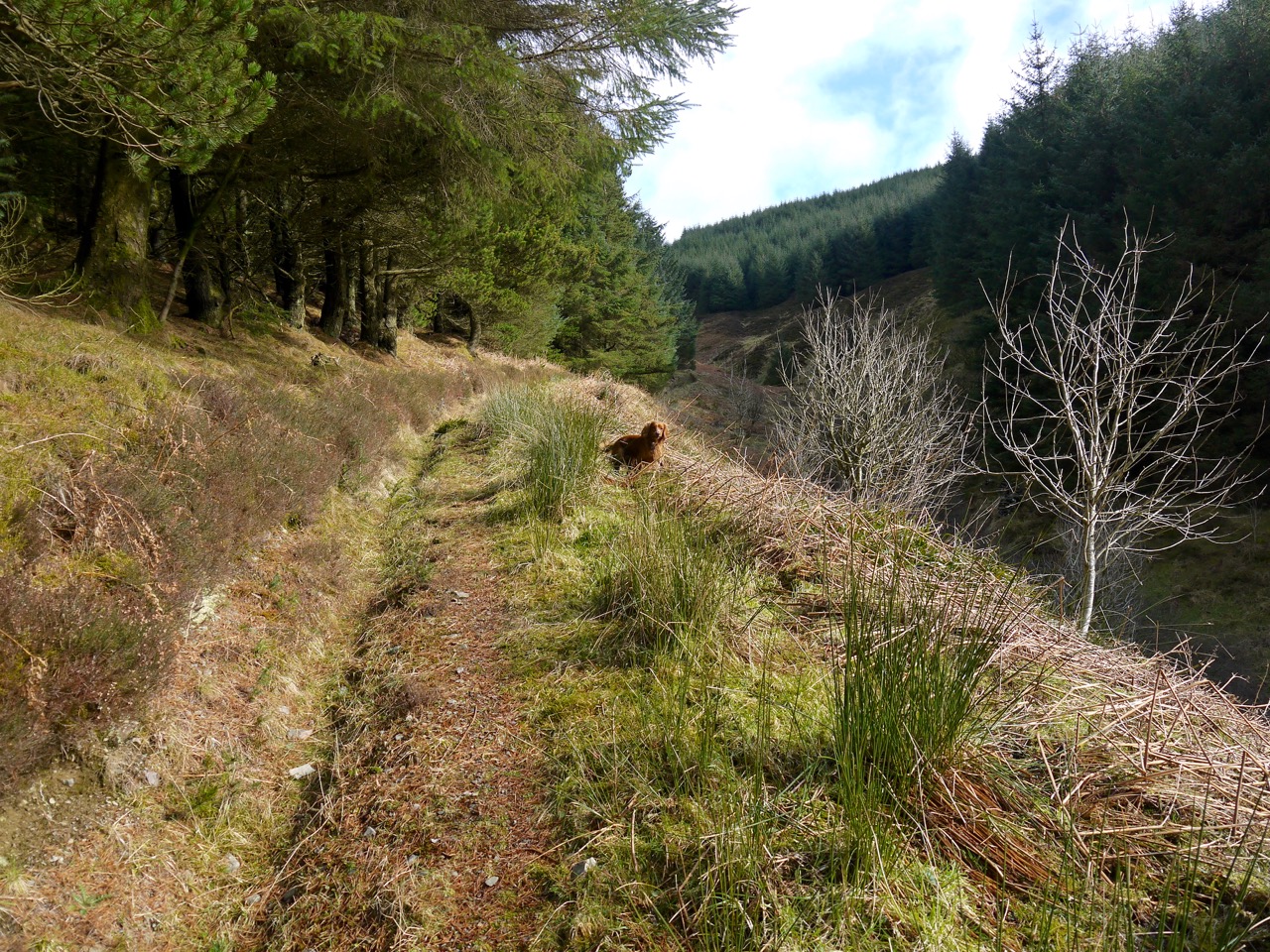 A few metres away, though, was an information board and looking towards it we noticed an overgrown footpath. This path led us to the ruins of the Garrowgill shepherd’s house, from where a more obvious footpaths climbs up the Garrogill. This was steep enough to catch the breath and did require a few pauses while we took in the views. As we climbed, the odd spot of unthawed snow covered the path more completely, making the going slippery, steep and uneven. 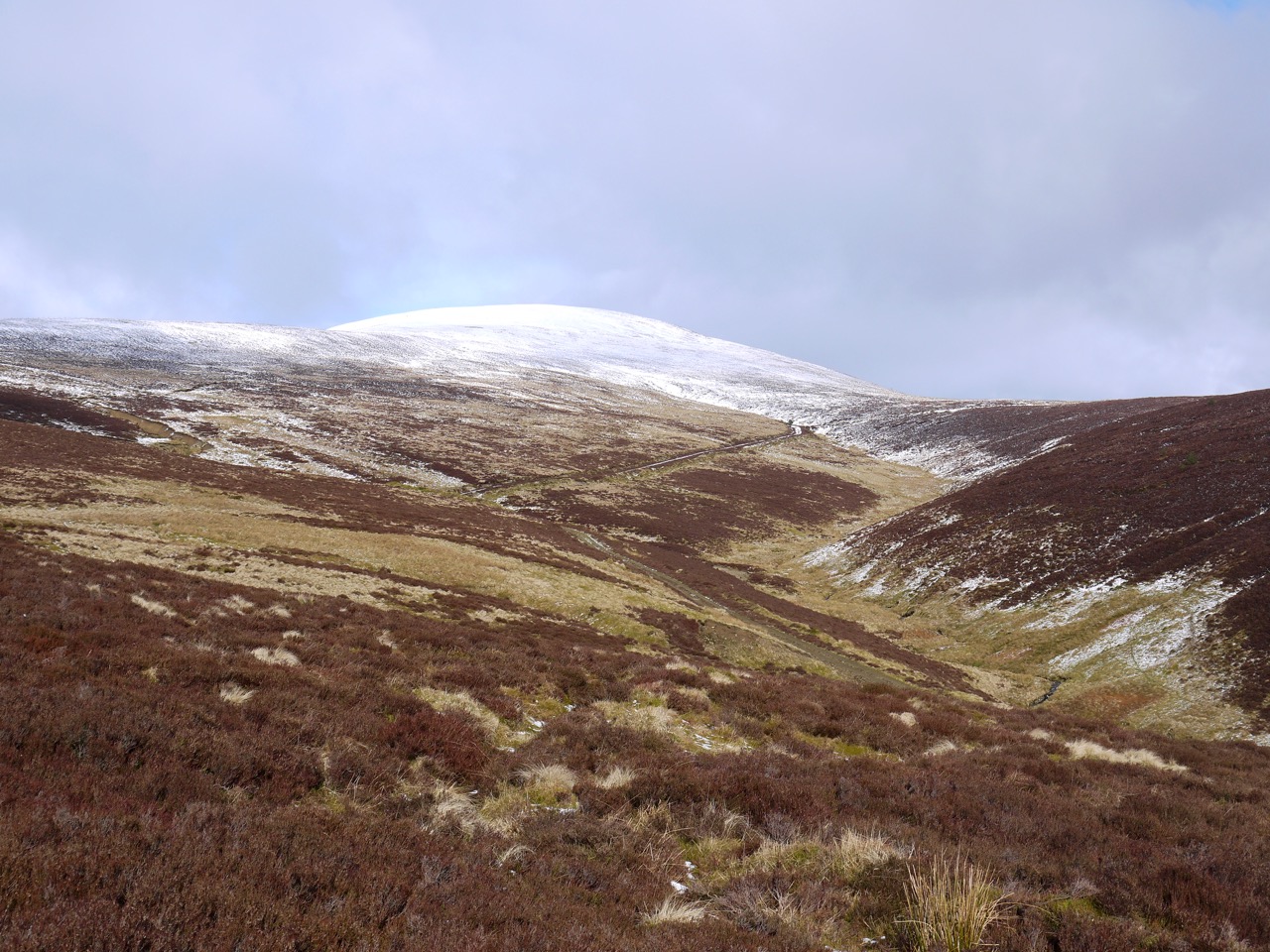 The col between Ewelairs Hill and Cowan Fell is a heather and blaeberry moorland, with a fence marking its highest point, where we left the Wamphray valley for the upper reaches of Dryfedale. Whereas Wamphray took its name from a place, Dryfedale (from the Old Norse Drifsdalr), is the valley named after a person called Drifr. Once over the col into Drifr’s valley we walked down to the firmer ground of the forestry track and turned to walk, ascending once again, towards Loch Fell. The view down the valley showed us the glinting water of the Solway, and the hills of northern Cumbria.

The track winds around the upper section of Dryfe Water and climbs across the col between Loch Fell and South Loch Fell, the high point marked by a fence and gate. The snow here was deep enough to make snowballs. Once over the col we had good forestry tracks, and were walking downhill for the remainder of the walk, mostly downhill anyway. 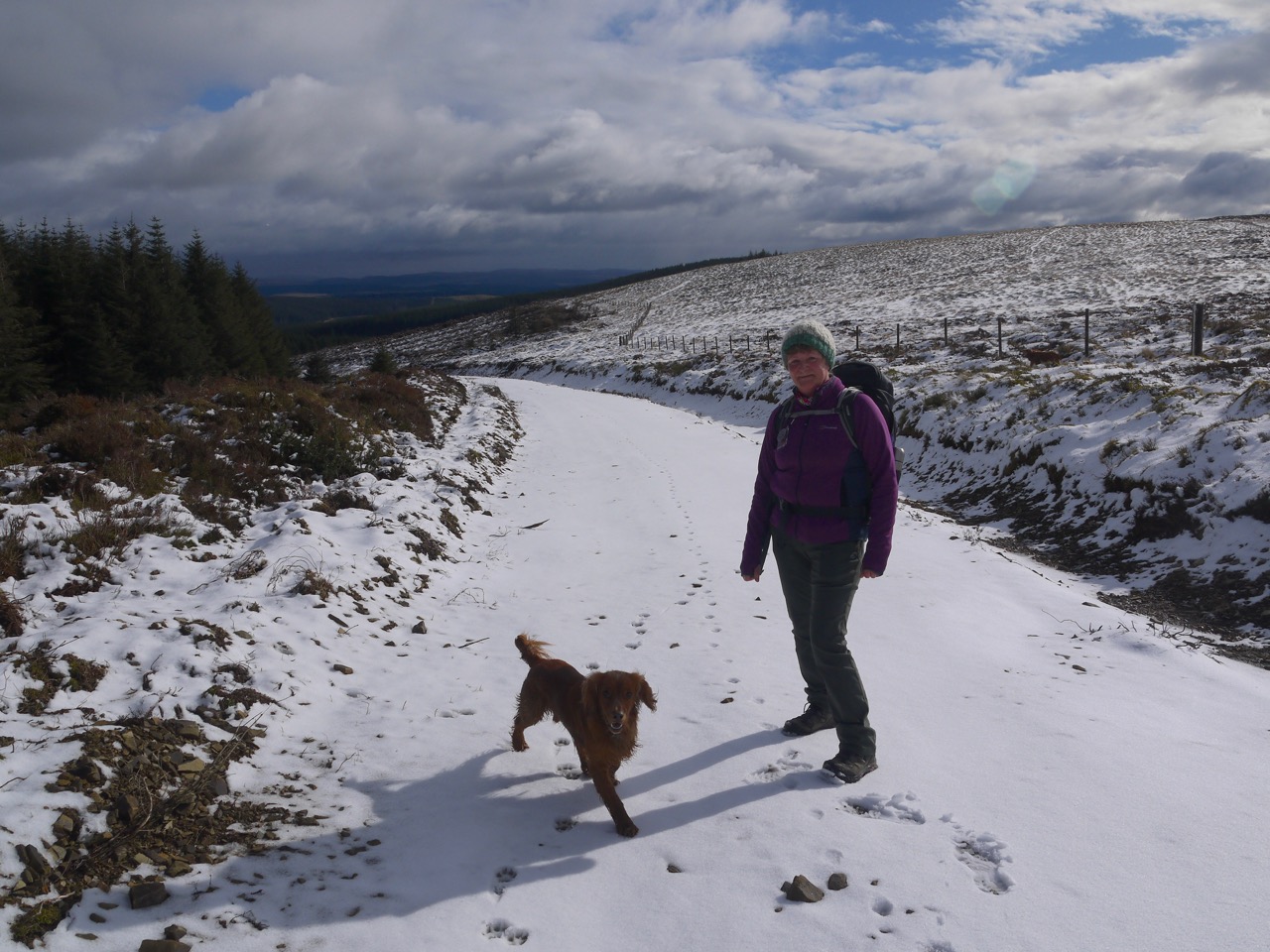 At Horse Knowes the R&R takes a right hand turn then follows a wide crescent which on the OS map is through forest. The trees between the track and Big Strushel Burn in the valley beneath it though have now been felled. We walked on looking for likely places to stop for lunch, failing to find anywhere that combined being sheltered from the wind and having somewhere dry to sit, until we found a small quarry near Strushel Knowes. This looked to have been cut after the new saplings had been planted since some were right on the edge and loosing their footings. Surely no one in their right mind would have planted saplings right at the edge. 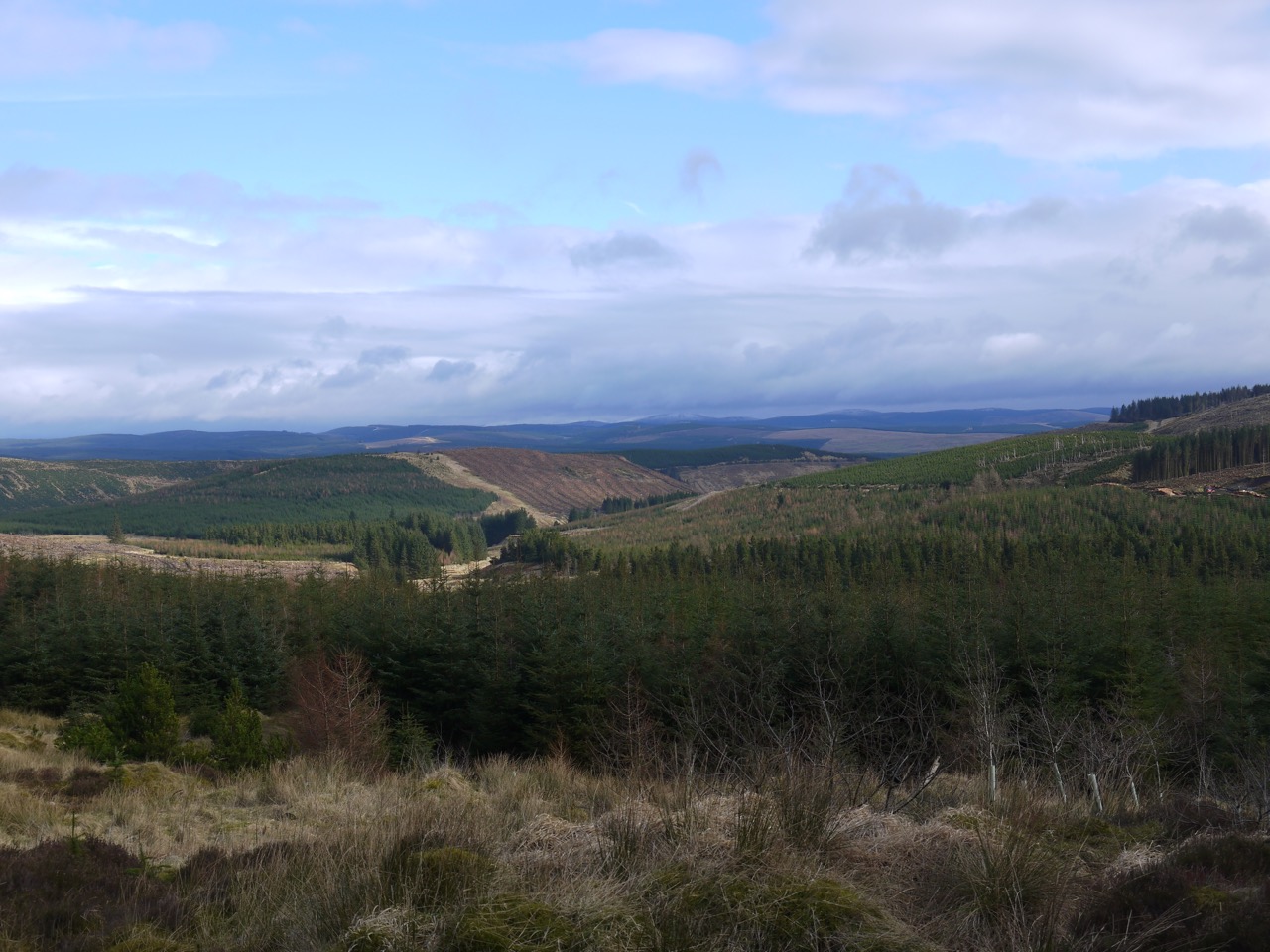 Once round the next corner we could see Ettrick Pen to the north and eastwards across Eskdale all the way to the snowy tops of Wisp Hill and its neighbours. The track passed freshly cut wood stacks with a strong scent of pine, and the machinery that had done the work. There seemed to be quite a few bare trunks left standing, many more than one usually sees. The track gradually descended down to the road beside Garwald Water at Kiddamhill. By then we were flagging a bit, well except for Eddie, who has boundless energy, but Sweep walking along with us rather than running about like the pup.

We passed the cottage at Ashybank, wondering if the trees on the bank, still free of leaves, might be ash trees. At Garwald the dogs had to go back on their leads while we negotiated cattle grids and the fields beyond had sheep so it seemed best to keep the leads on there too. We could tell we were nearing Eskdalemuir since there were prayer flags and a prayer painted on a stone at Garwald. 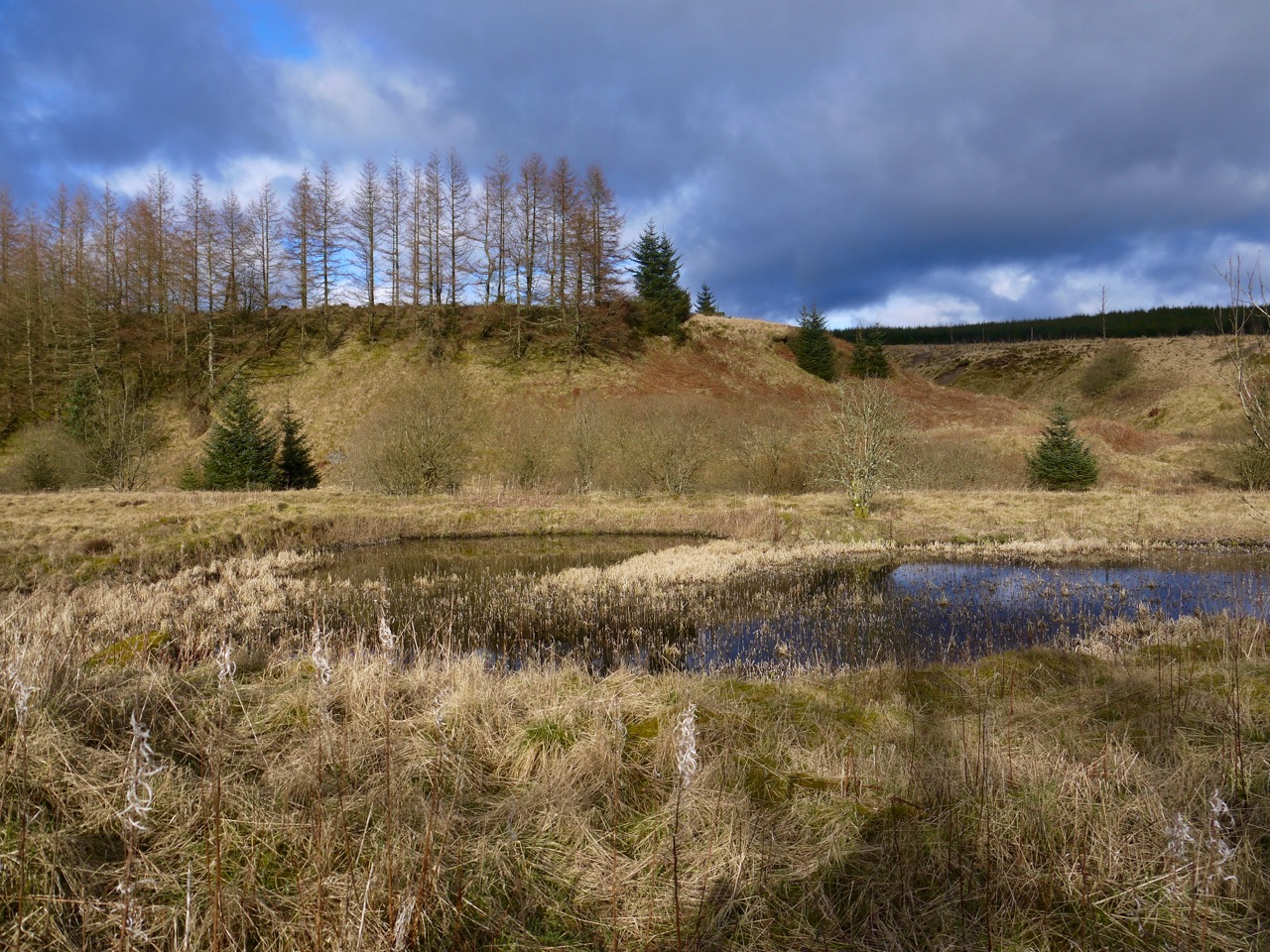 There were several ponds beside the farm road, one with a large stand of bullrushes. When we walked beside the river itself it was interesting to see the variety of rocks and boulders, some orange-pink, others grey and many shot through with streaks of different colours. Beyond the sheep fields the tree begin again and the river flows through a deep gorge, Garwald Linn. After this is was a short stroll back to the car which was parked in a lay-by on the main road. 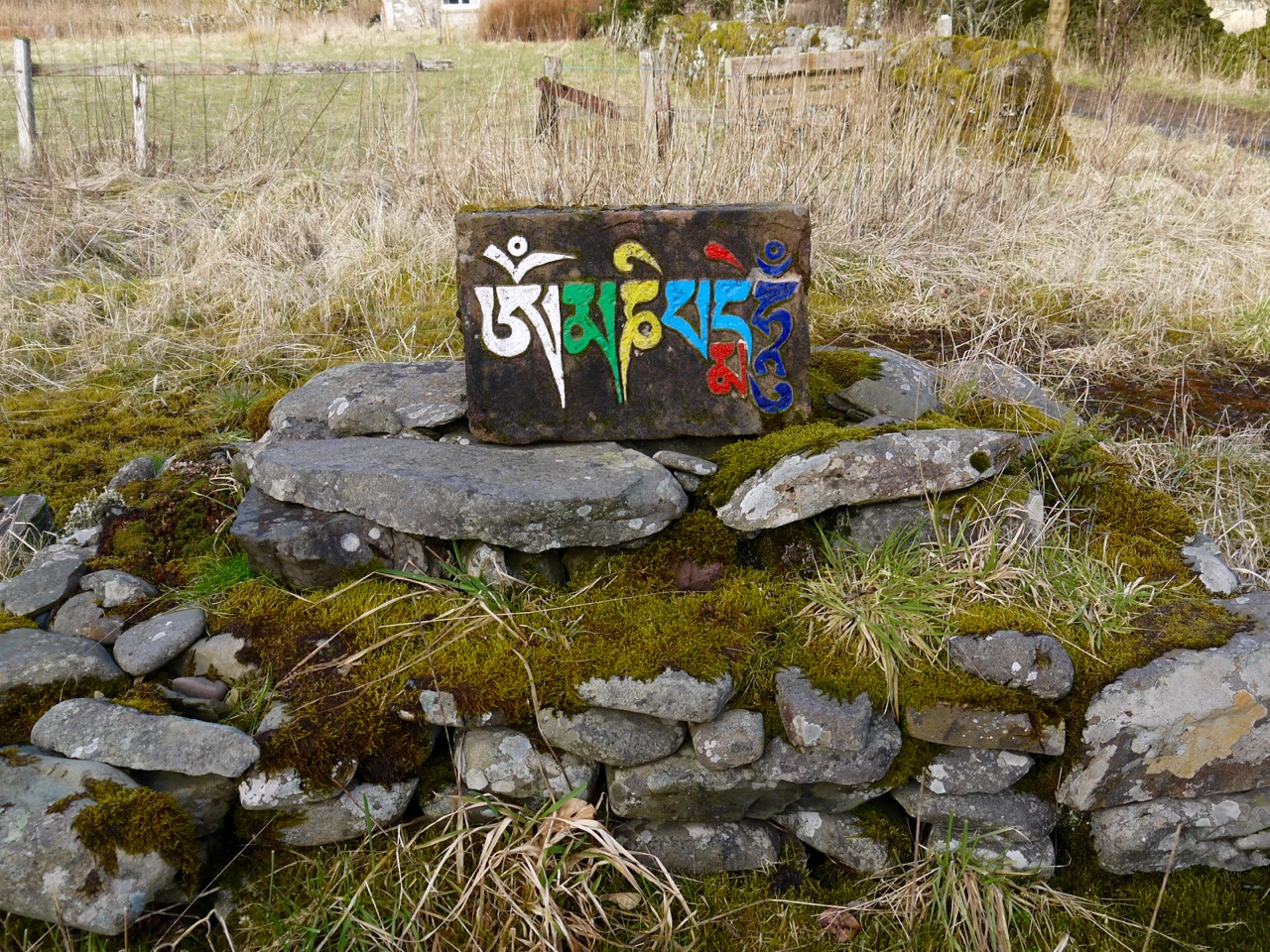 Share this...
This entry was posted in Dumfries & Galloway and tagged Romans and Reivers, Ruins. Bookmark the permalink.