Cumbria Way: Methera – the valley of the fortress to the oaken river 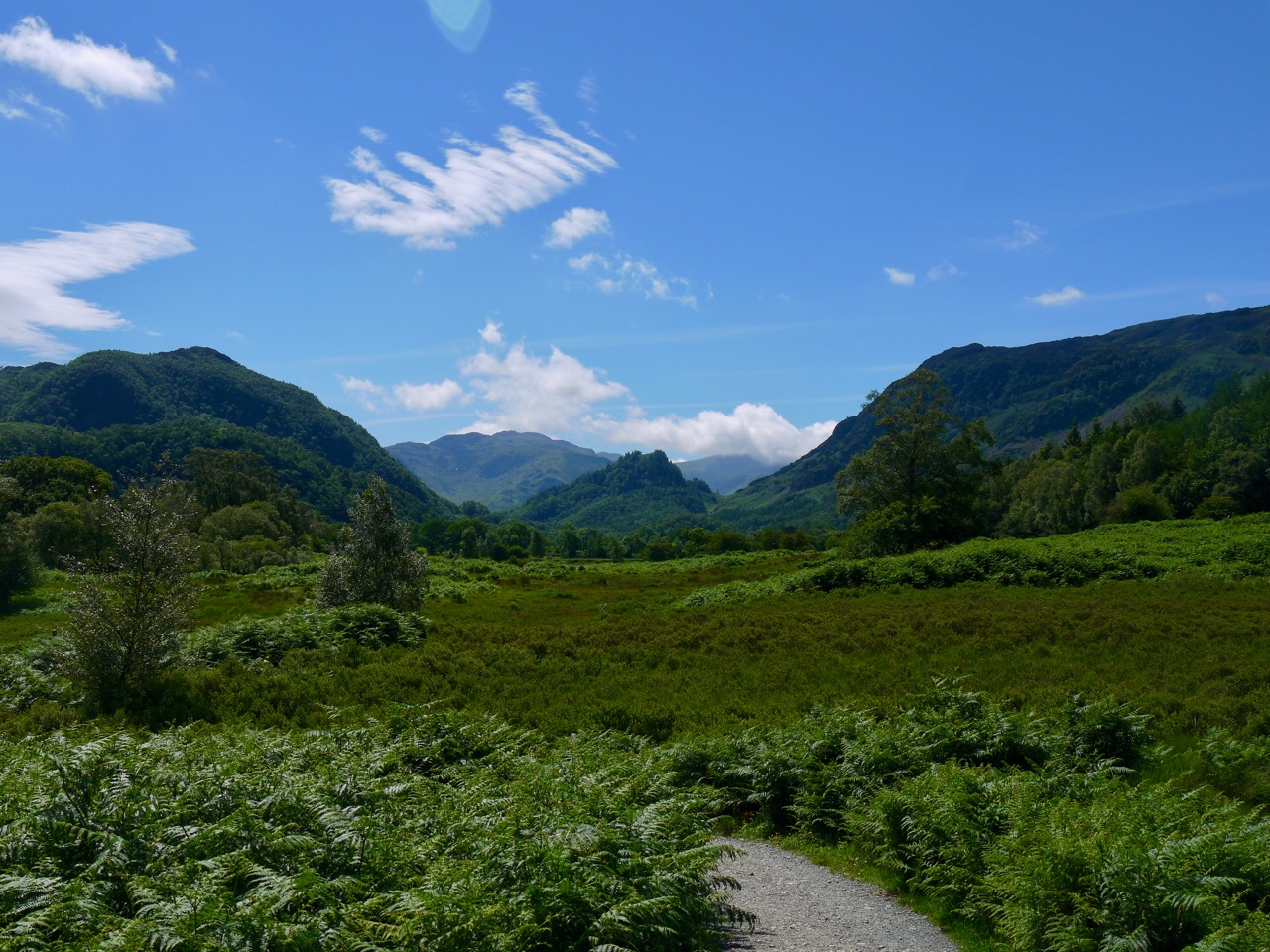 It might sound a little more like a journey in the Lord of the Rings than the Cumbria Way, but we were neither beset by orcs nor tempted by an accursèd ring, and we strode toward Skiddaw rather than Mount Doom.

Unlike characters from a fantasy journey, we parked in the pay and display carpark (in Keswick). It was only a brief walk round to the bus-stop and we had five minutes to spare for the No.78 to Rosthwaite. Despite this well planned timing however, the bus was just driving away as we turned the corner, so it was our fate was to wait for the next one.

The weather squaring up to give us a sunny day so I used the time to apply some sunscreen. But five minutes later the No.77  (Buttermere via Honister) arrived and offered a useful alternative to waiting in Keswick, and as it turned out, the 77 gave us better views than the 78 (which we had sampled a couple of weeks earlier). I would definitely recommend the 77 over the 78 (a phrase that would be so much more impressive were I discussing wine vintages rather than Cumbrian buses).

Our walk proper started in Rosthwaite, a small village on a wide flat valley floor, bounded by craggy fells to the east (Scawdel) and west (Watendlath), with Catbells just visible along the Borrowdale valley to the north and the Borrowdale Fells to the south.

Borrowdale (Borgar-á-dalr) is the valley of the fortress, which presumably had once stood on Castle Crag, while Rosthwaite’s naming is less certain. Thwaite (þveit) is old norse for a clearing, but there seem to be several interpretations of the Ros- including cairn/heap of stones/cave (hreysi), horses (hross), or Hroarr a personal name, but in modern Icelandic hreysi is a hovel/crude hut and I wonder if that might have been its provenance. But who knows if Hroarr cleared some forest, the clearing stood by a cairn, or when hreysi came to mean a crude building? Or perhaps diminutive versions of hreysikǫttr (wildcat), or hreysivísla (weasel) described the clearing? 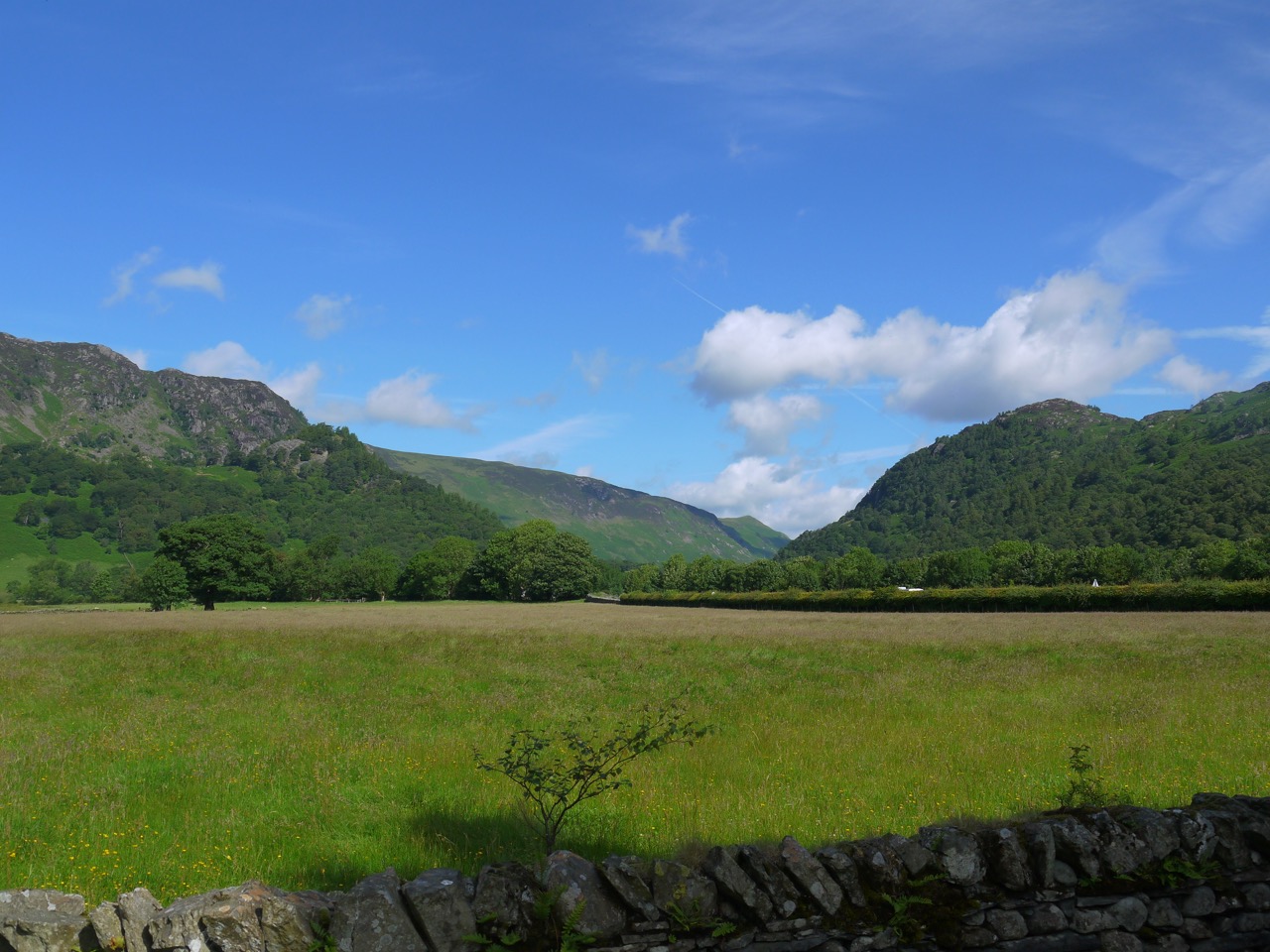 Catbells, in the distance, from Rosthwaite

Rosthwaite no longer looks like a clearing in the woods. Only small stands of trees remain. The buildings cannot be be described as wretched hovels, there are neither wildcats nor weasels to be seen, nor horses for that matter. If there were cairns remarkable enough to name a place they are now gone, perhaps incorporated in the dry stone walls. As we set off, a race looked to be finishing at the village hall. They must have started early. 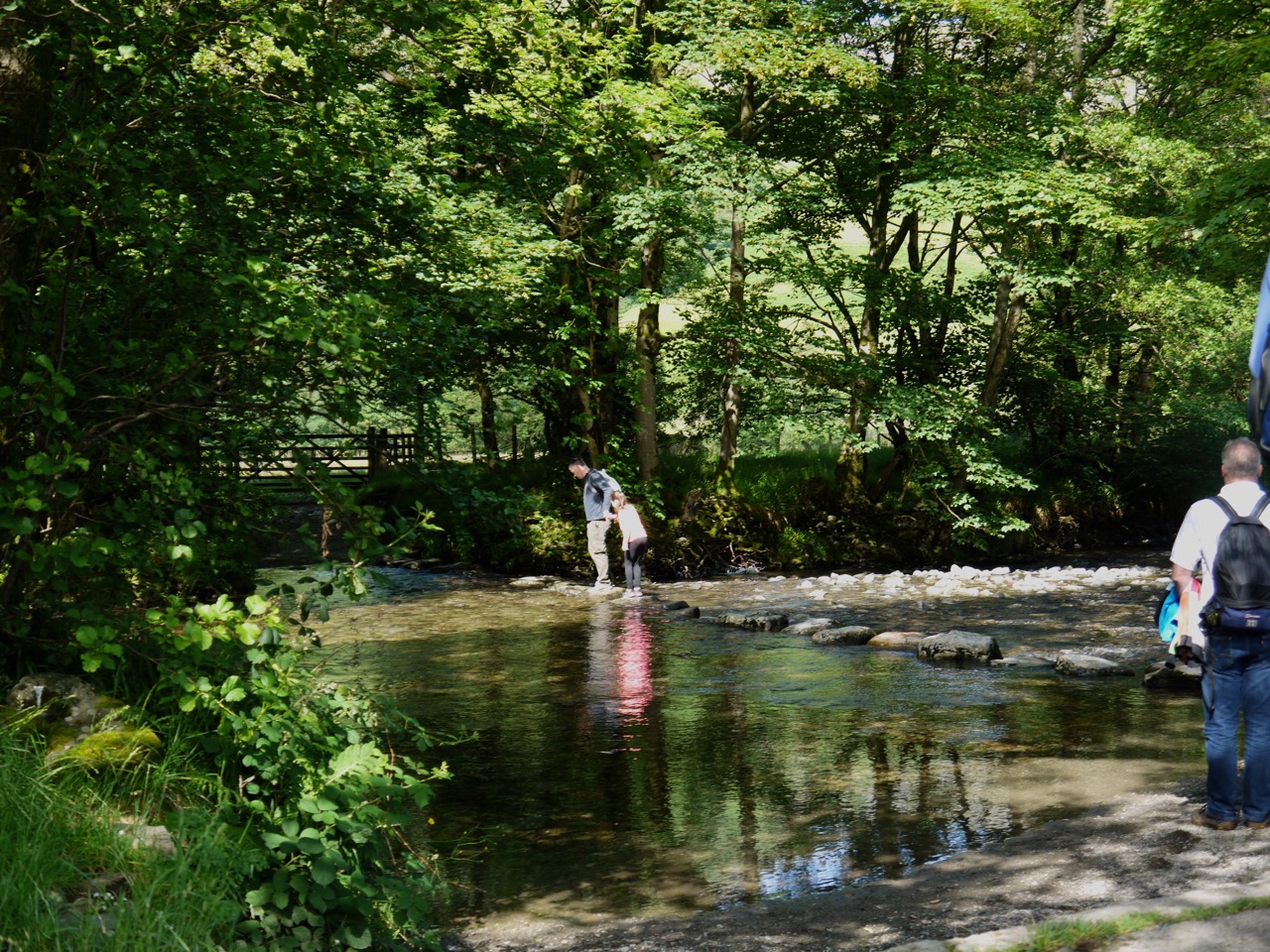 We followed a farm track which led us to the River Derwent (alternatively said to derive from dwr-gwyn, white water, and derwa, oak tree). The track reaches the river at a ford which has stepping stones, but our route remained this side of the river and we crossed at a stone footbridge a few hundred metres further on. We then walked in sunshine through grassland with Low Scawdel above us.

High Hows Wood allowed us to swap direct sunlight for cooler dappled light beneath its trees. Crab apples hung over the path but were small enough that even I wasn’t tempted to eat any. After crossing a narrow bridge we emerged into the sunshine at a wide curve in the River Derwent. It was still a little early for paddling though. 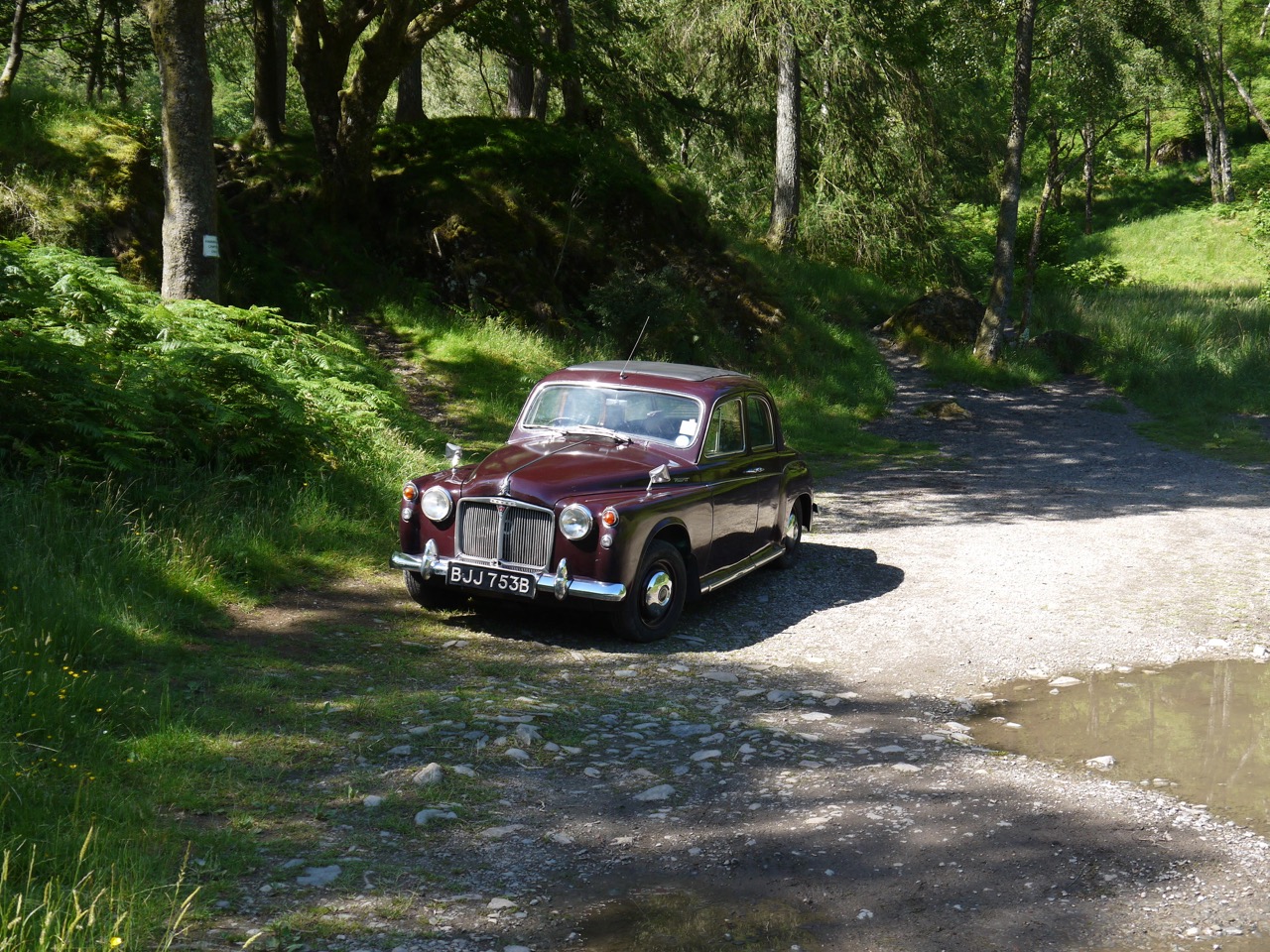 A little further on we passed a purple Rover. That’s not a flower, but an old car with 1964 plates, parked beside the path.  The next clearing was at Hollows Farm, the half way point of the Cumbria Way (by my estimation). The open ground allowed us a glimpse of Skiddaw,which we had last seen from Stake Pass above the Langstrath. And looking back along Borrowdale gave us a good view of Castle Crag, guarding the valley. 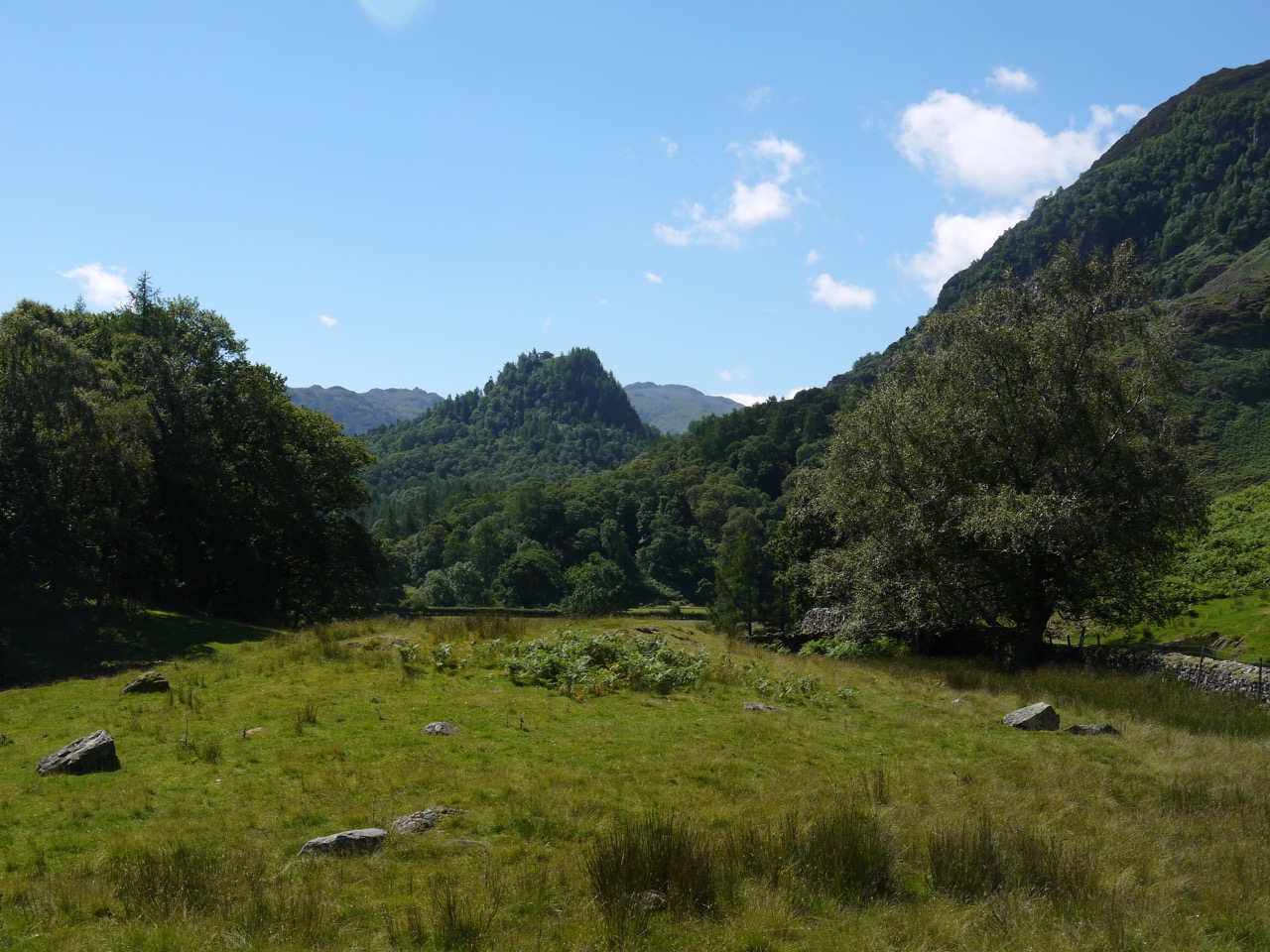 Being in the open there were more wildflowers by the path: fox and cubs, yarrow, foxglove, bedstraw, bell heather, bird’s foot trefoil, horseshoe vetch, yellow corydalis, and spotted orchids. By now we were looking for a shaded spot for a short break, and after walking across a slope covered with wild thyme, with Blencathra making its first appearance in the distance, we found a shaded tree stump.

This tree stump had coins hammered into it, and I decided to get into the swing of things by pushing in a coin using a handily placed rock. Hopefully it will bring me some luck. 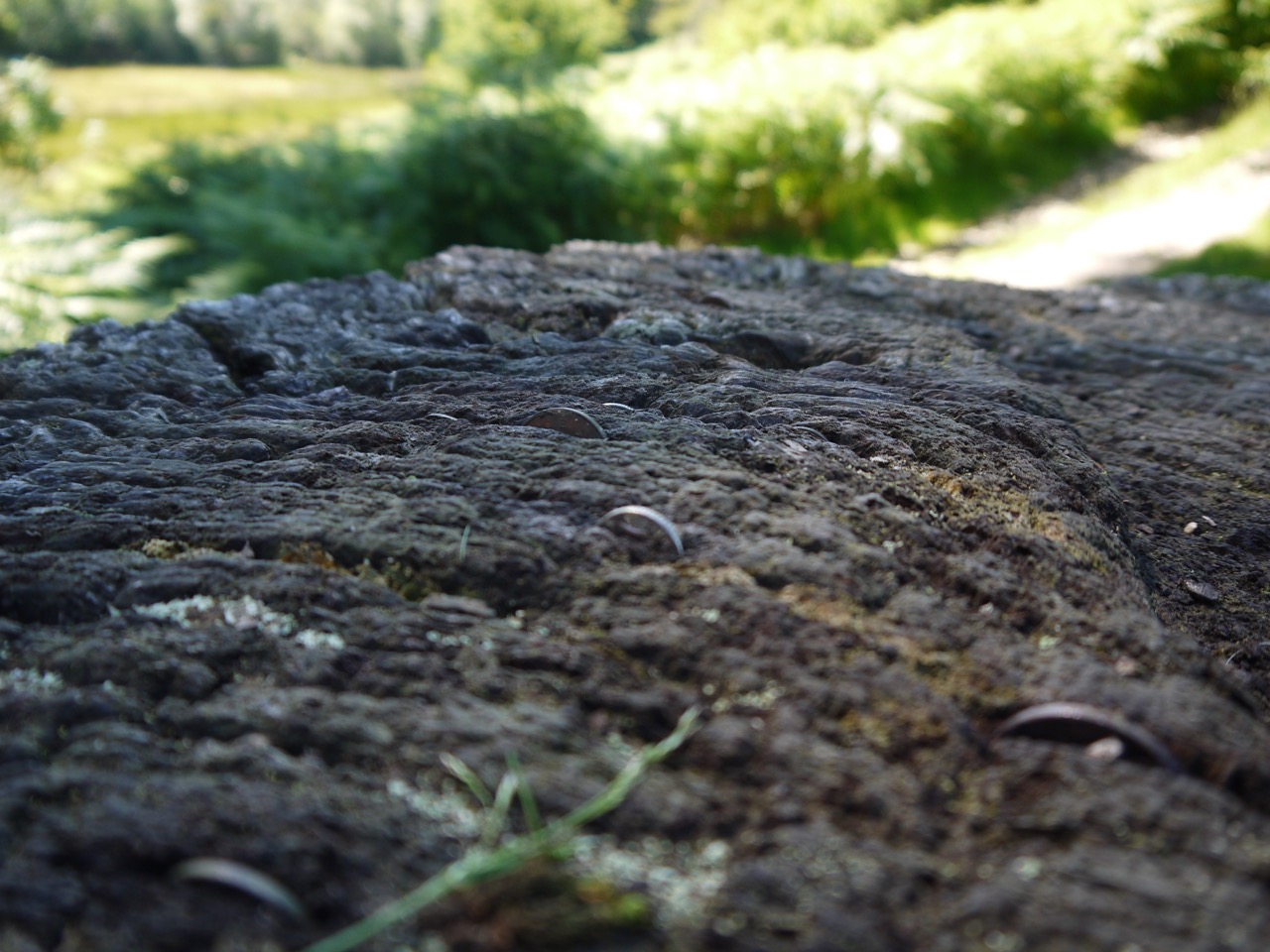 Lucky coins in the wood

After  a brief rest and a cup of coffee we walked a short way to join a minor road for half a kilometre. This was the way we had come on the bus and as we walked the 77A bus came by again. It was getting quite busy around here with plenty of walkers from the nearby Borrowdale Hotel. 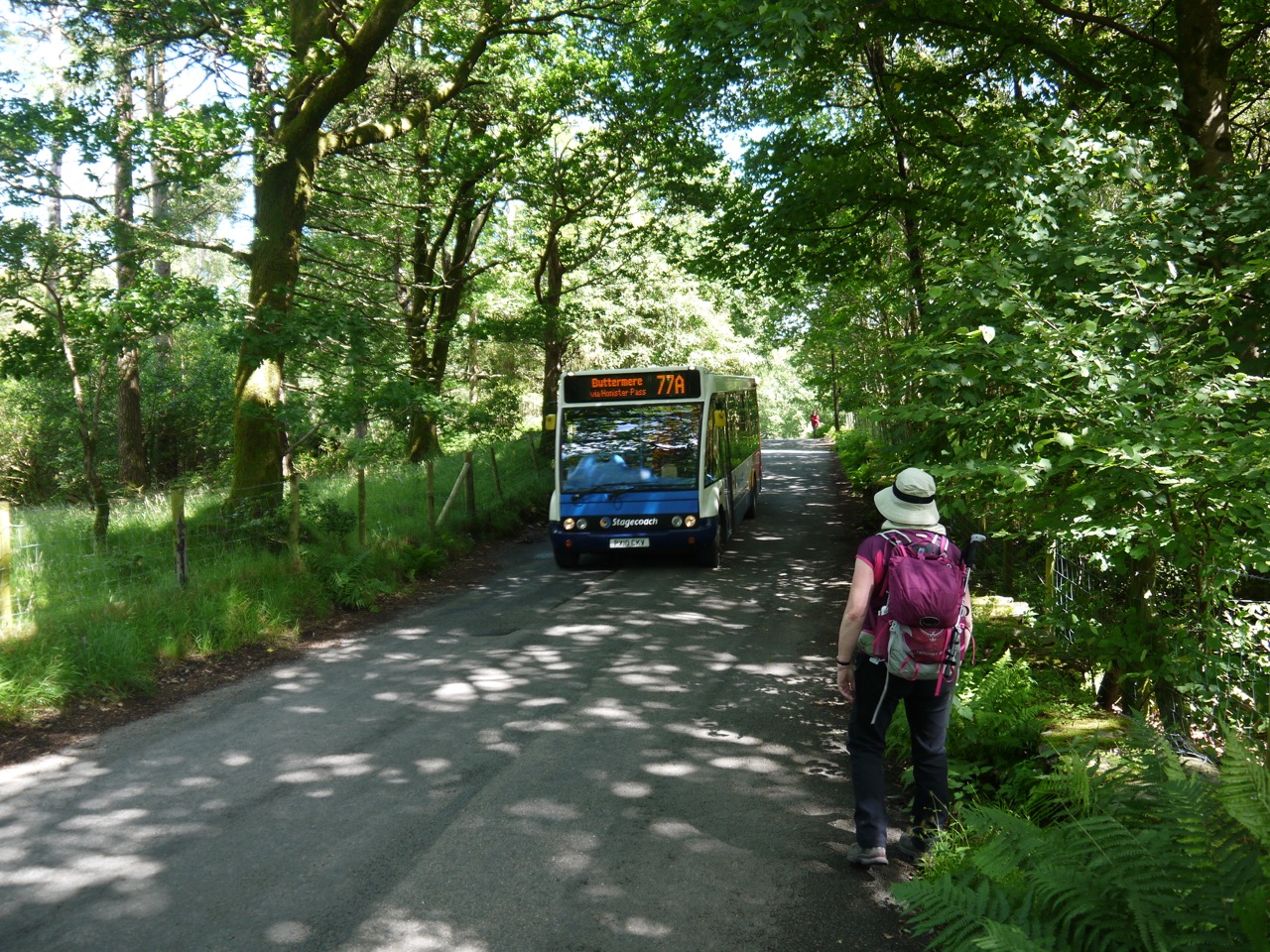 The road walking was soon over and we left the road to head down towards the Lake. The ground here was moorland with bracken and bog myrtle but then became wet enough that boardwalks had been built to carry the footpath. The dry days though meant it was possible to leave the path to have a closer look at the orchids and asphodel growing there. 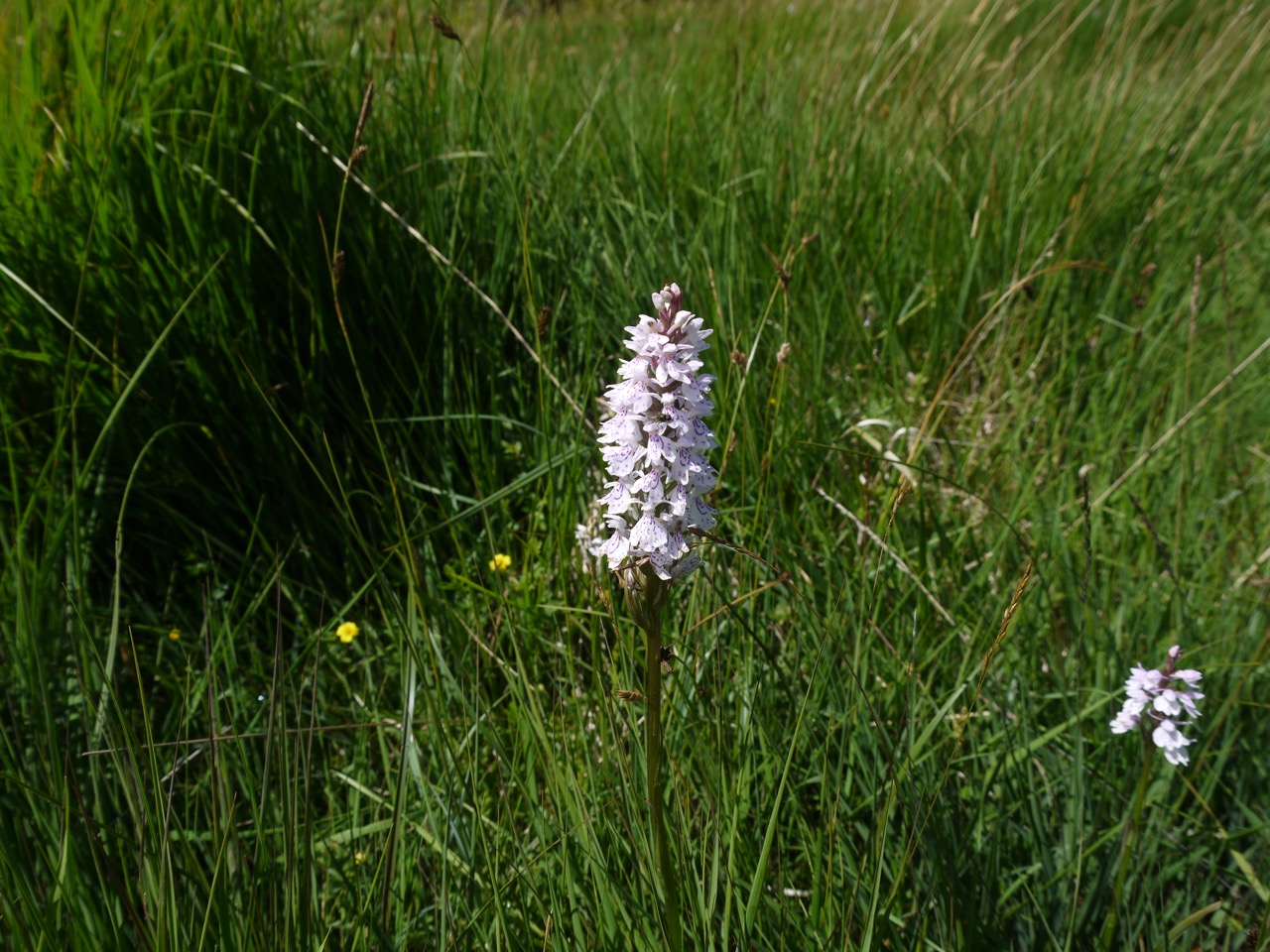 Catbells was now visible and as we drew closer, walkers on the ridge gave us a better idea of its size and distance from us. Larger and further away than it would have otherwise appeared.

The path then led us down to Derwent Water, with Skiddaw and Blencathra on it far side. Just being beside the water seemed to cool the air a little and knowing we had completed the first half of the day’s walk was a morale booster. 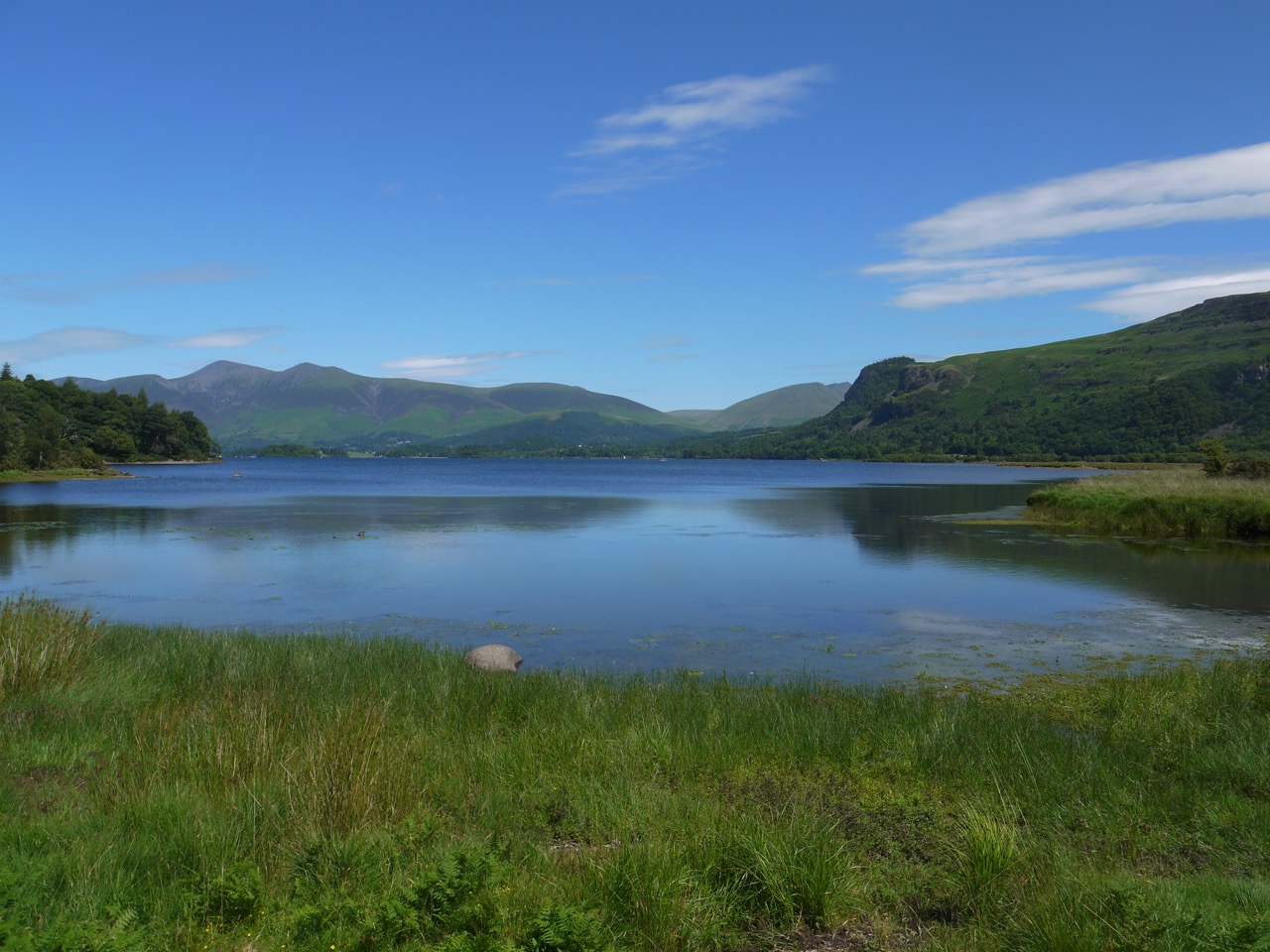 The path beside the lake was easy walking, and for the most part easy navigation as well. There were open areas filled with bog myrtle and  bracken and then broadleaved woodland. Near Brandlehow Bay we found a sign informing us we were at Rupert’s Wood which had me reminiscing about Rupert the Bear annuals when I was a child. And a little way beyond this wood we found the Teddy in the window, a small teddy bear in the window of a large shed. Walkers had taken the trouble to send him postcards and several were on show in his window. 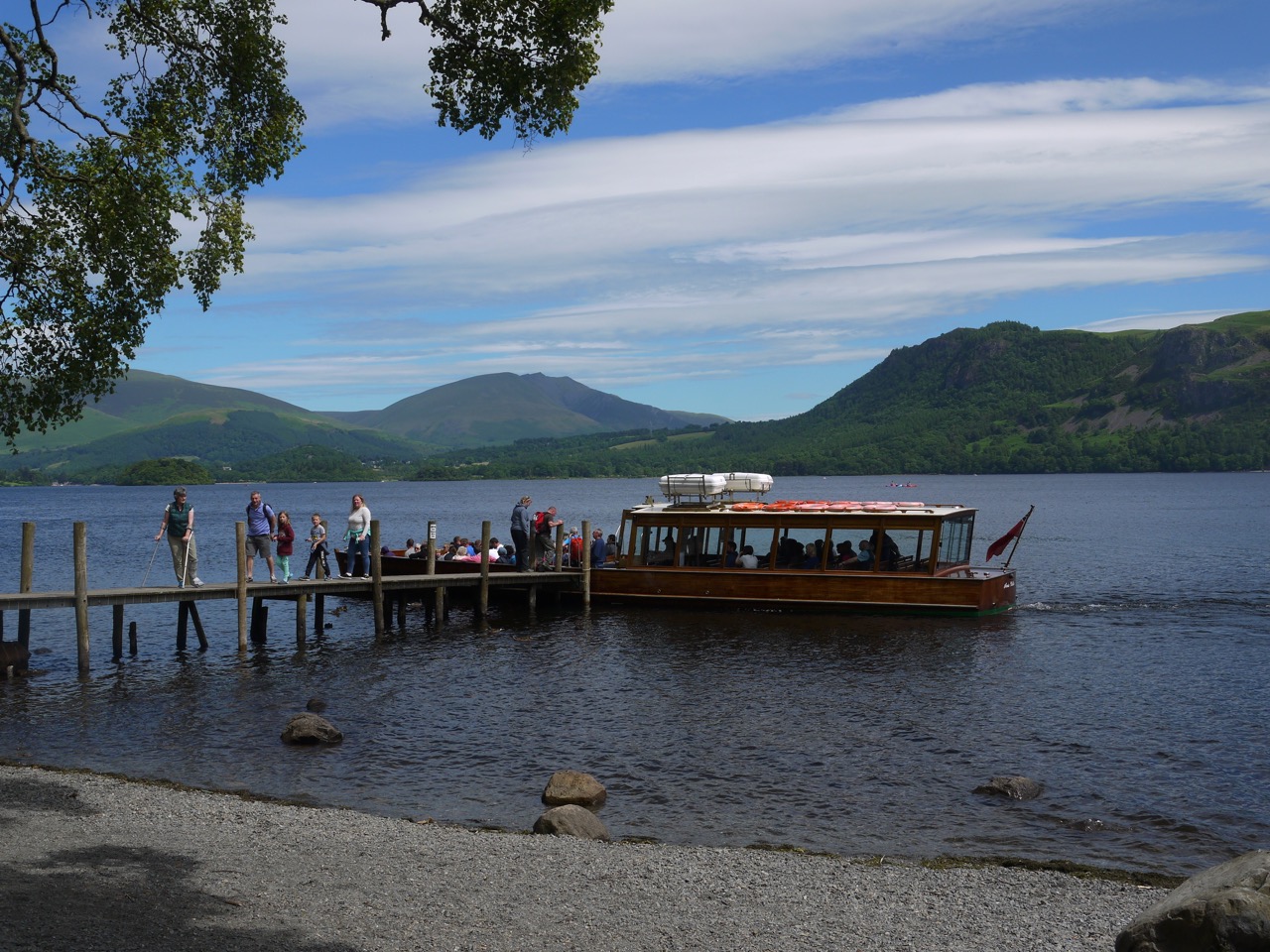 We passed through a body mass index filter (a narrow bridge) and came down to the landing stage just as the Derwent Steamer was disgorging some of its passengers. We would see several times more as it plied its way up and down the lake. 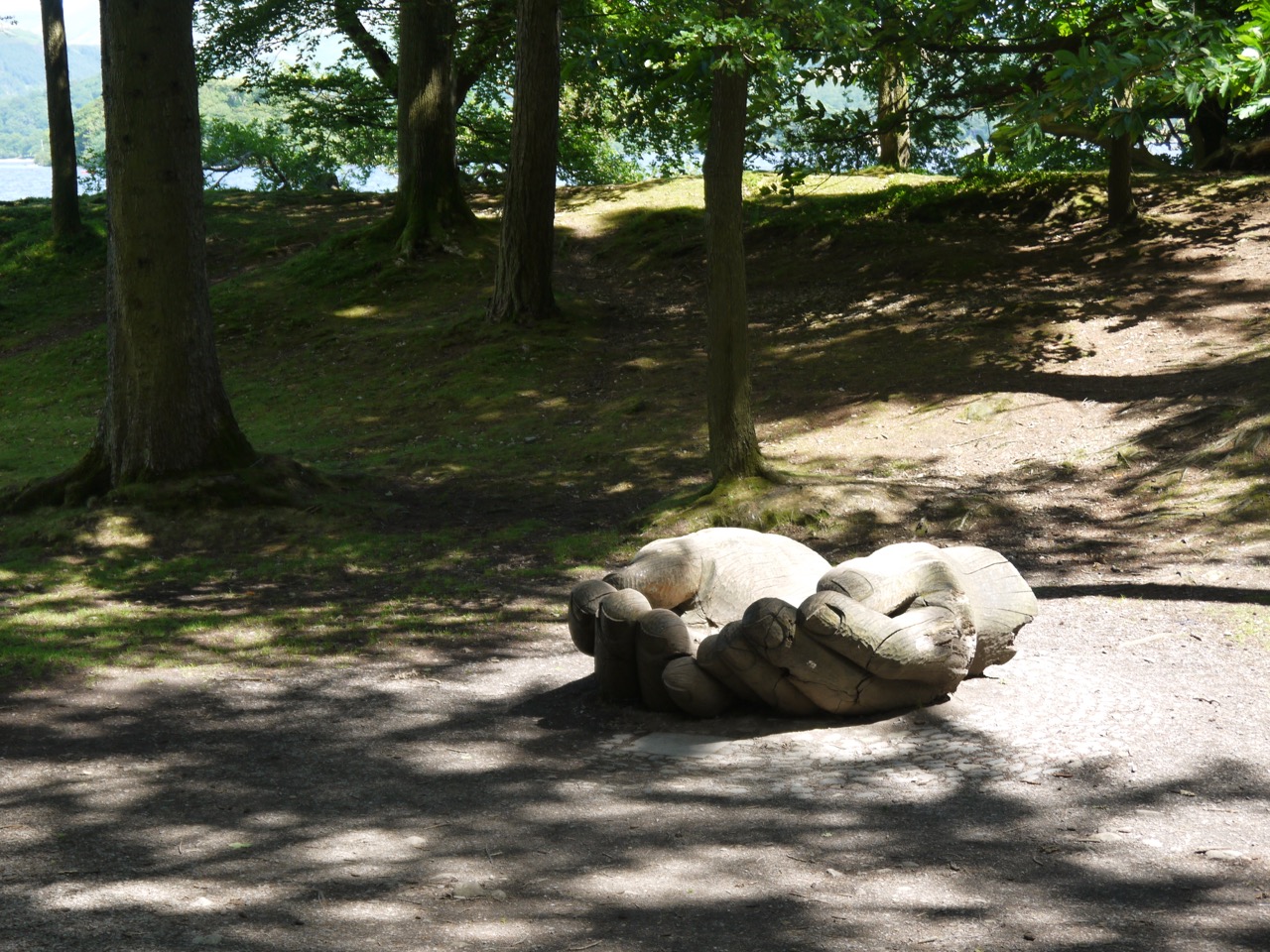 The Brandlehow Hands were free for photos and we spent a little time trying to get photos  before stopping for lunch. I had thought about climbing to higher ground for a better view for our rest but we settled instead to climb down to the lakeshore and eat our lunch to the sound of lapping water. There was St John’s Wort nearby just in case we were tempted to induce some CYP3A4, but I stuck to eating sandwiches. It was certainly a nice place for lunch, excellent views, reasonable rocks for seating and shaded from the direct sunlight.

Refreshed and refuelled we set off through more woodland then fields of marsh thistle and then farmland with alpacas.

The Cumbria Way then joined a minor road that took us through Portinscale then along a rather busy footpath into Keswick.  By then the blue sky had filled with cloud and it looked as though the rain wasn’t too far away.