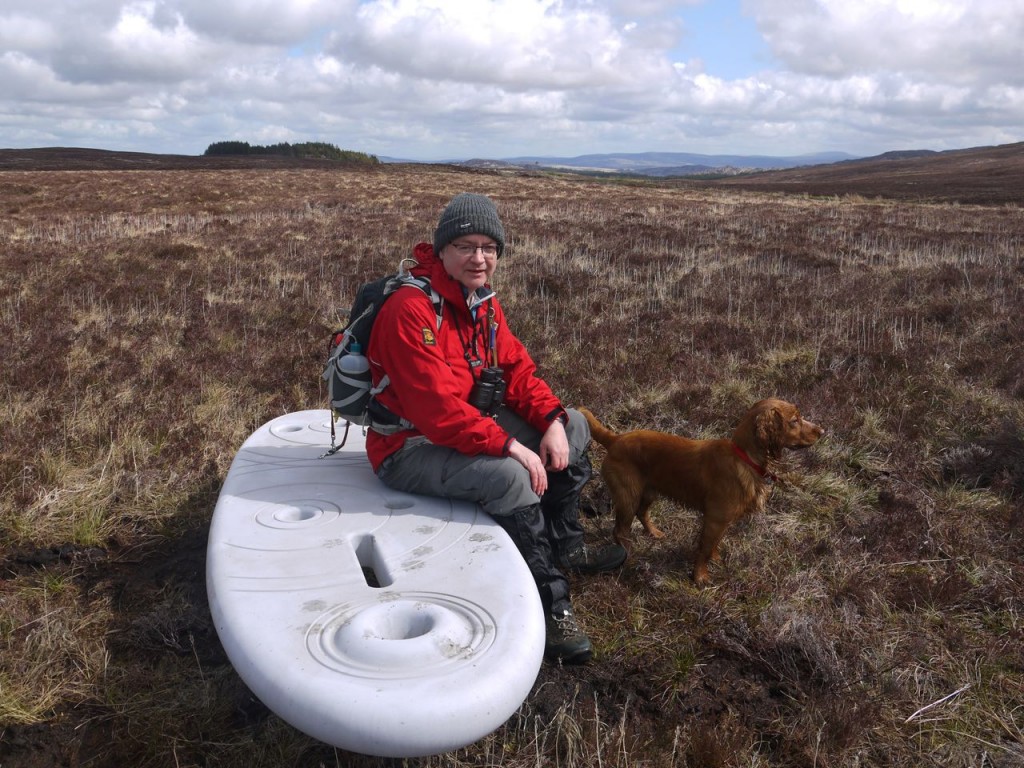 Blanket bog is one of Scotland’s most extensive semi-natural habitats but if I am honest I tend to think of peat bogs as a difficulty to be crossed on the way to somewhere else, a  difficult terrain, the walking of which should be minimised. When picking my way around peat hags my eyes and my mind are usually on the higher ground rising out of the bog or searching for an easier track.

This pair of Rosnes benches sit in the upland peat bog northwest of Waterhead on Minnoch and when I first set about planning a route I had considered the visiting the various surrounding hills, large or small, the Stinchar Falls or Aldina Loch but then I had a flash of inspiration. This was an opportunity to explore the bog itself, immersing ourselves in it, figuratively that is, not literally. The dogs of course embraced the more literal interpretation. 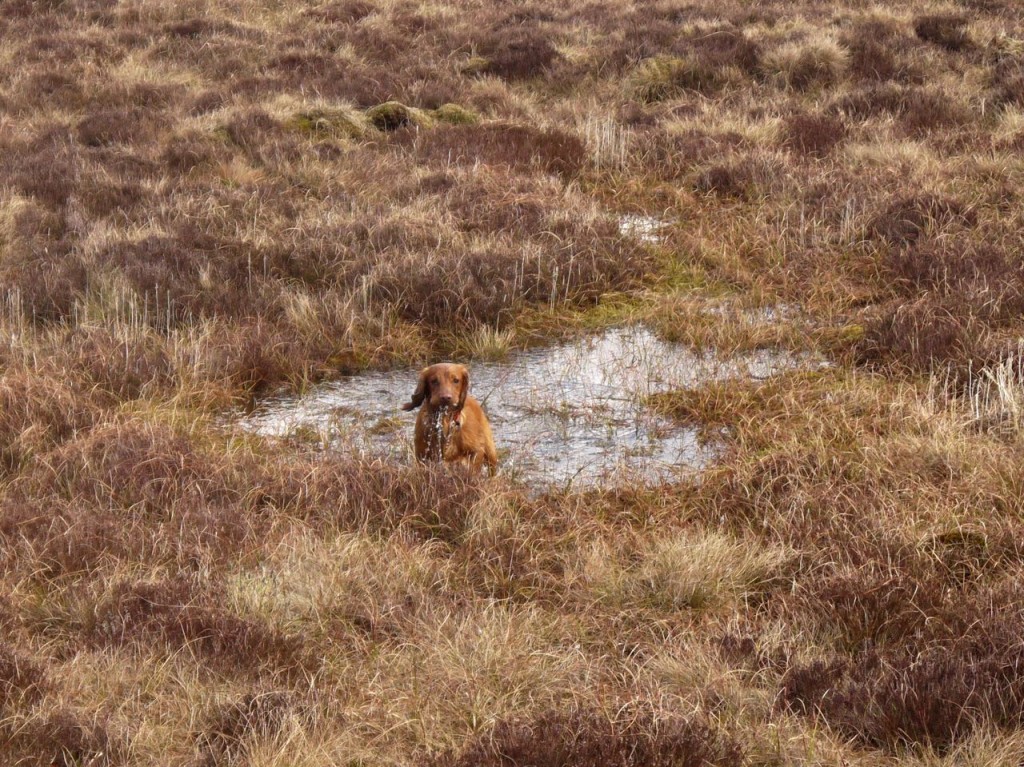 There are seven 440m contour islands on the OS map and I did wonder if we could make this “The seven summits of Waterhead”. These islands are not obvious to the naked eye and given the ever changing shape of the bog they may no longer actually exist but they could I suppose be toured using micro-navigation techniques. But who wants to count steps all day. We happened to cross three of them. Had it been more I might have gone with the seven summits title for the post. 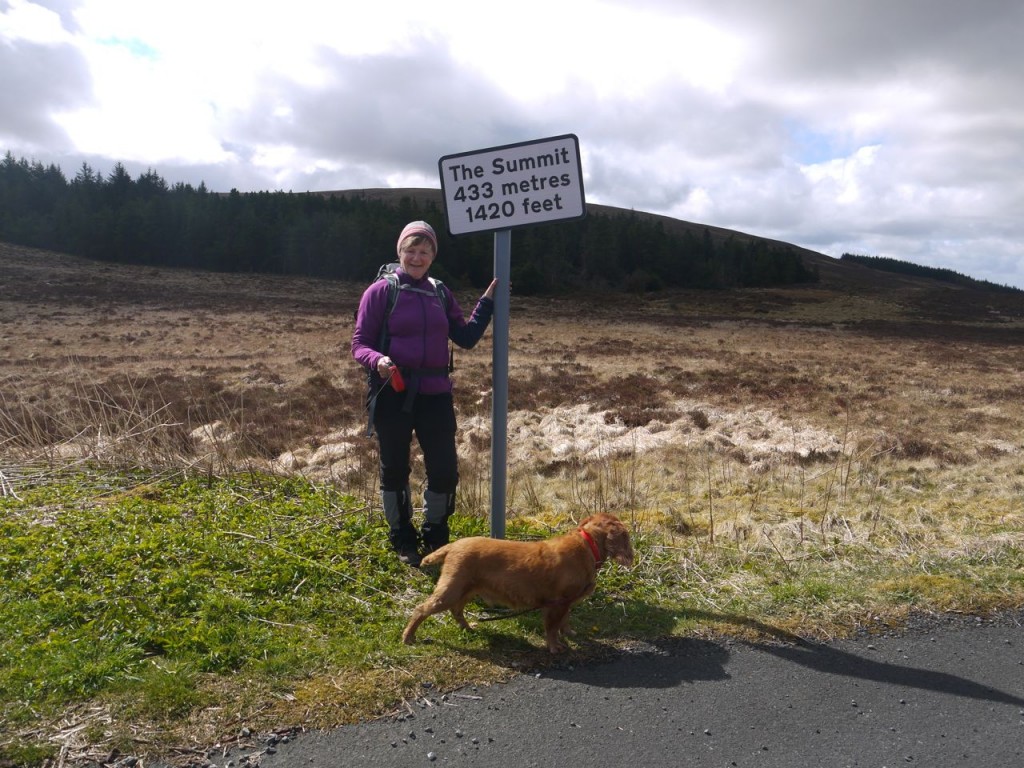 There isn’t much to say about the route.  We left the road at its highest point which has a sign “The Summit 433 metres 1420 feet”, (so higher than Shap). The benches were just a short distance away and from there we headed towards the higher ground to the north, heading for a post on the horizon. This narrow wooden post bore a metal number plate “1760” but any thoughts that this commemorated the start of King George III’s reign were soon dispelled. The post was but one of many, some with numbers such as “1761”, some without, but with each taller post guarding four smaller ones. The four smaller posts, about 10cm high, roughly marked out a square metre. 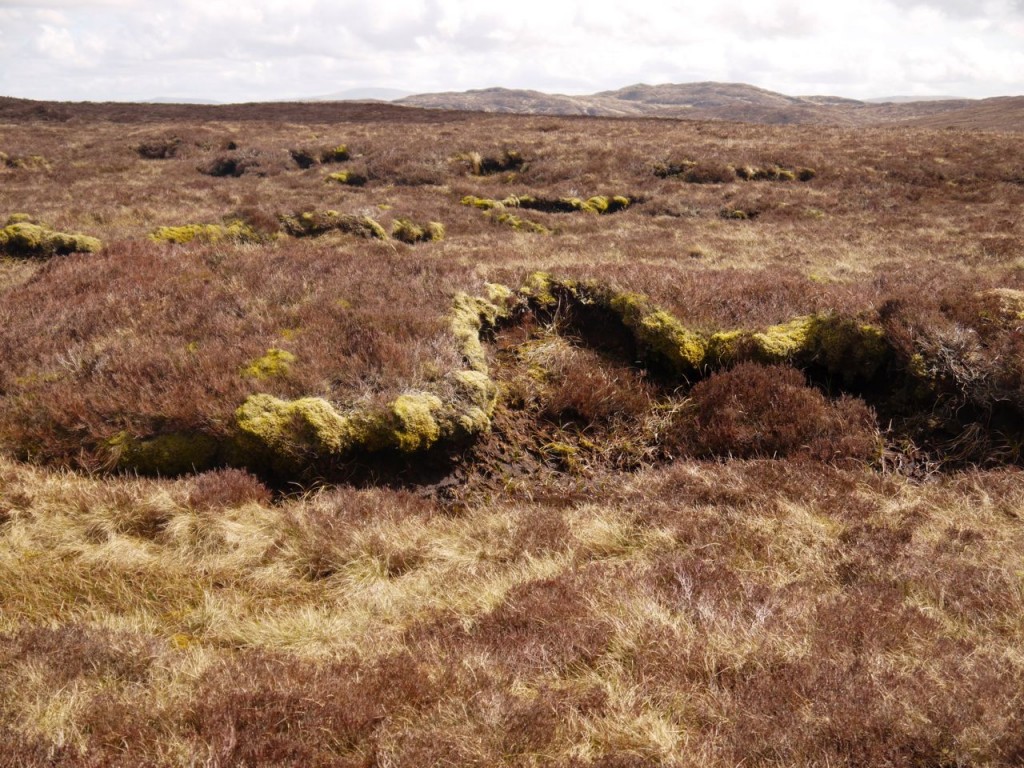 The terrain was knee deep heather interspersed with boggy grass, reeds, moss both flat and in mounds, some with fruiting bodies, peat hags a metre or more high, black peat mud, open pools of water, and areas I took to be slime covered pools. When the dogs jumped in these however it was clear they were not pools but what I can only describe as gloop. 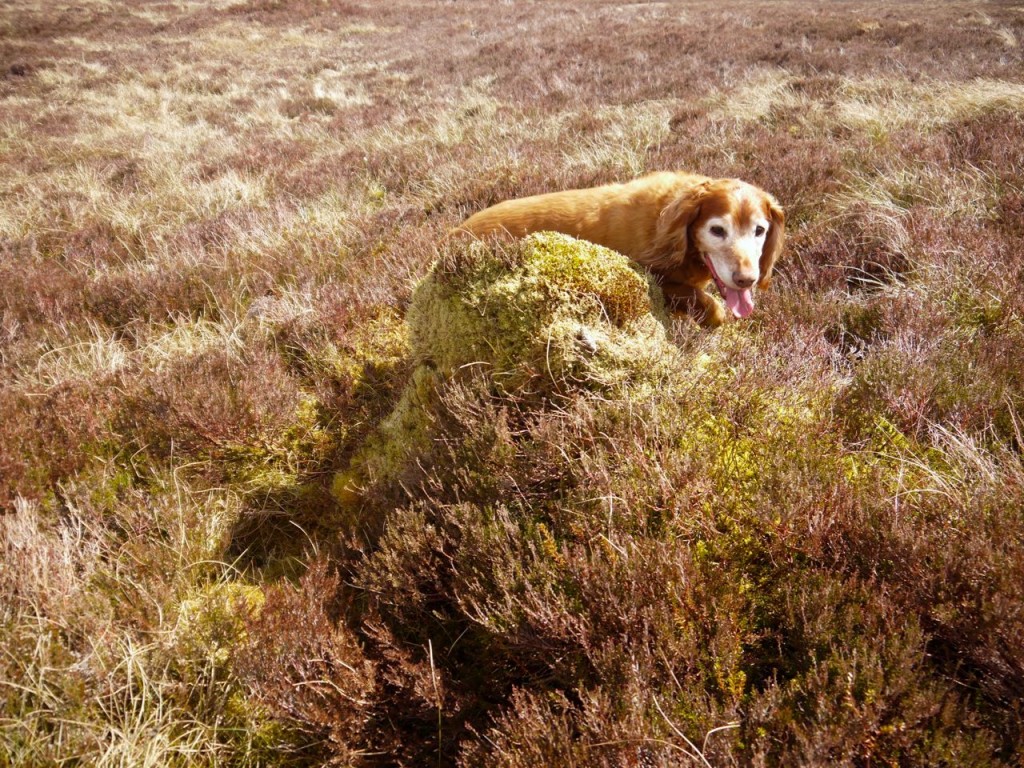 Birds flew about, cruelly teasing Eddie and with time, binoculars and listening we were able to improve our level of identification from “small brown fluttery things with dipping flightpaths” to Meadow Pipits. The calls clinched it. The only other fauna was a giant bee.

I had intended the walk to be aimless wandering in the heath but some direction is needed so we headed across to the rectangular stand of trees hoping to find the memorial marked on the OS map. 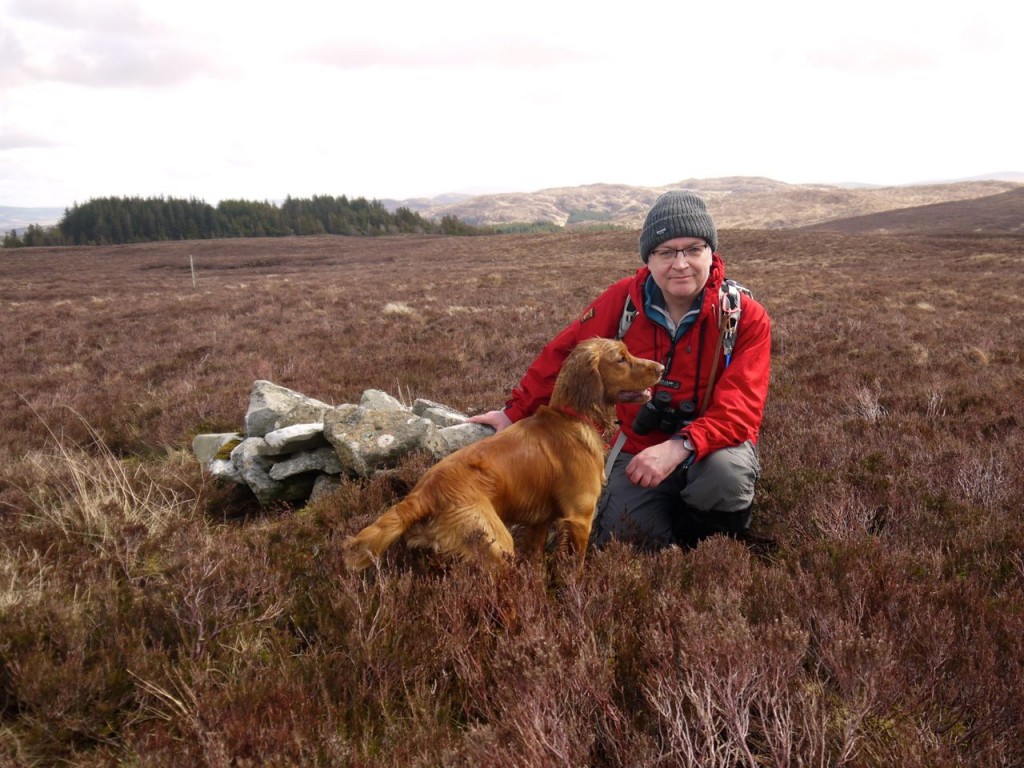 We passed two cairns on the way. The first, a small affair almost lost in the heather, which would be missed unless you happened to stumble upon it, marks one of the 440m contour islands; the second, a better effort visible from a distance, marks the 433m spot height that is probably the summit of Black Hill.

Though this walk was about the bog itself, there were views of more distant places. Ailsa Craig was easily seen as was Arran, its mountain tops covered in cloud. A ship was visible off the coast. Closer we had the smooth shale hilltops such as Shalloch on Minnoch and the very different irregular granite tops of Cornish Hill and Shiel Hill. 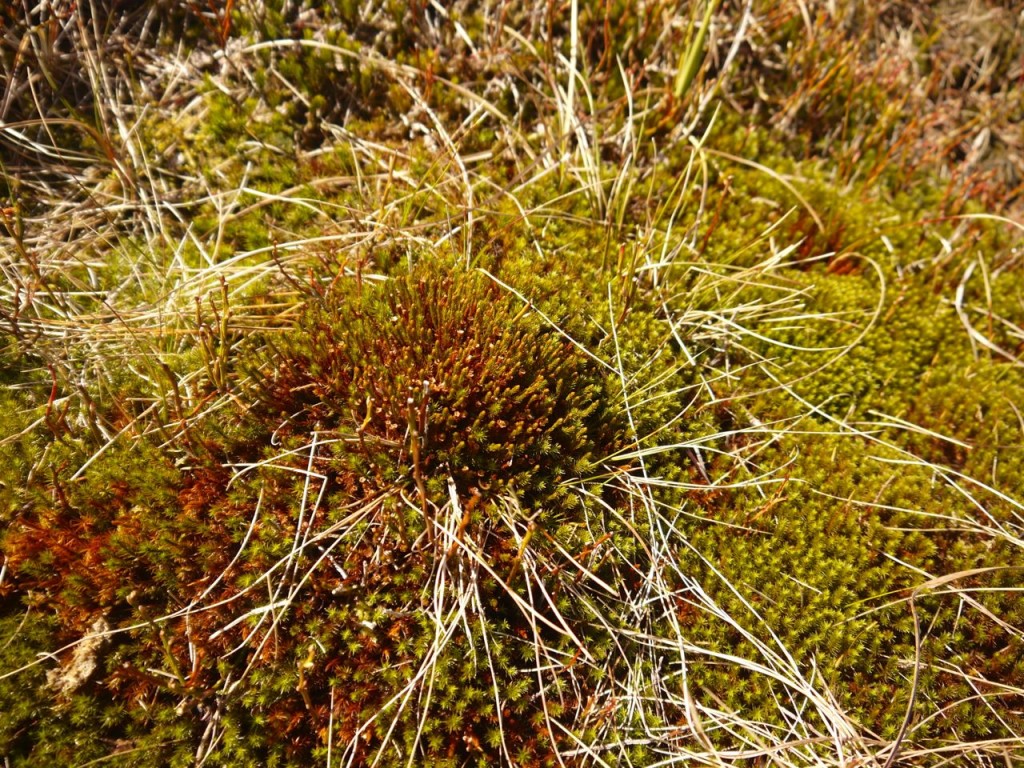 Just before the trees we came upon a line of old naturally whitened wooden posts which must once have been a fence line though one “post” in the line was clearly a tree trunk. The rectangular stand of trees is I believe one of several forestry testing sites and had a variety of trees within it. From the trees we could see the memorial stone and picked our way through boggy ground to reach it. 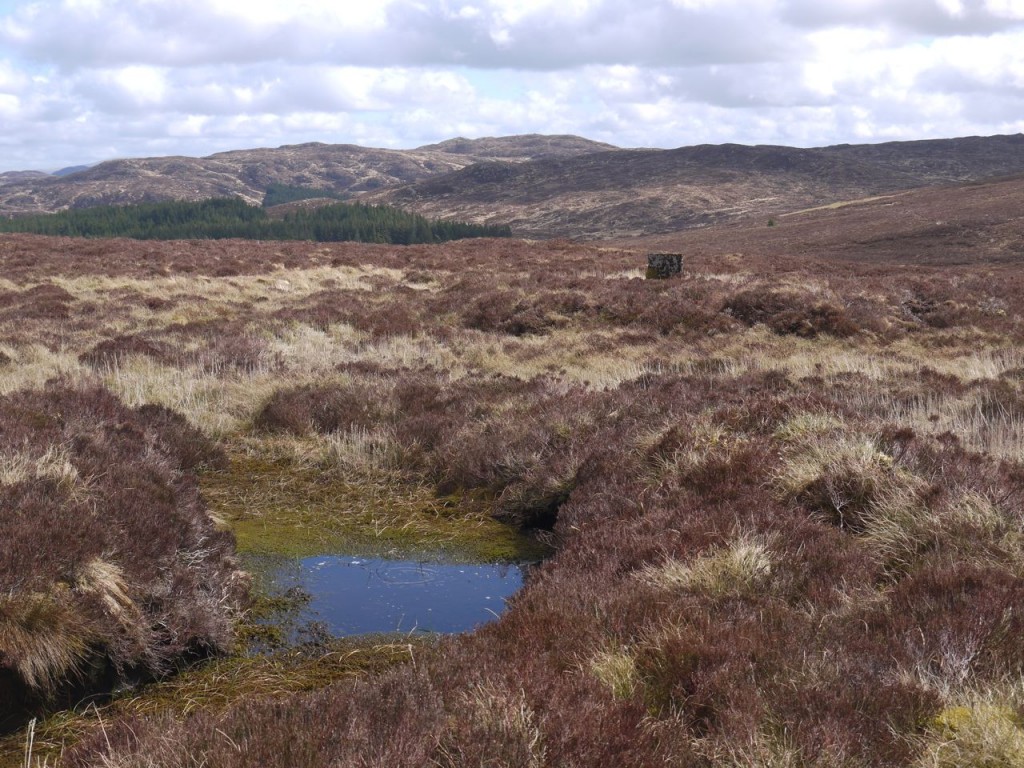 The memorial is a rectangular stone block inscribed “Agnes Hannah died here”. Unfortunately Agnes’ story remains uncertain. All I can find out about Agnes Hannah is a comment that she was a nurse and died here in a blizzard. The same information is reproduced on many websites and it is unclear if even this is true. The internet offers nothing more about Agnes or the memorial.  I wondered indeed if this stone might be much older than everyone is presuming, perhaps back to Covenanting times, but I suppose if this were a covenanting memorial it would say so or be listed on their sites. 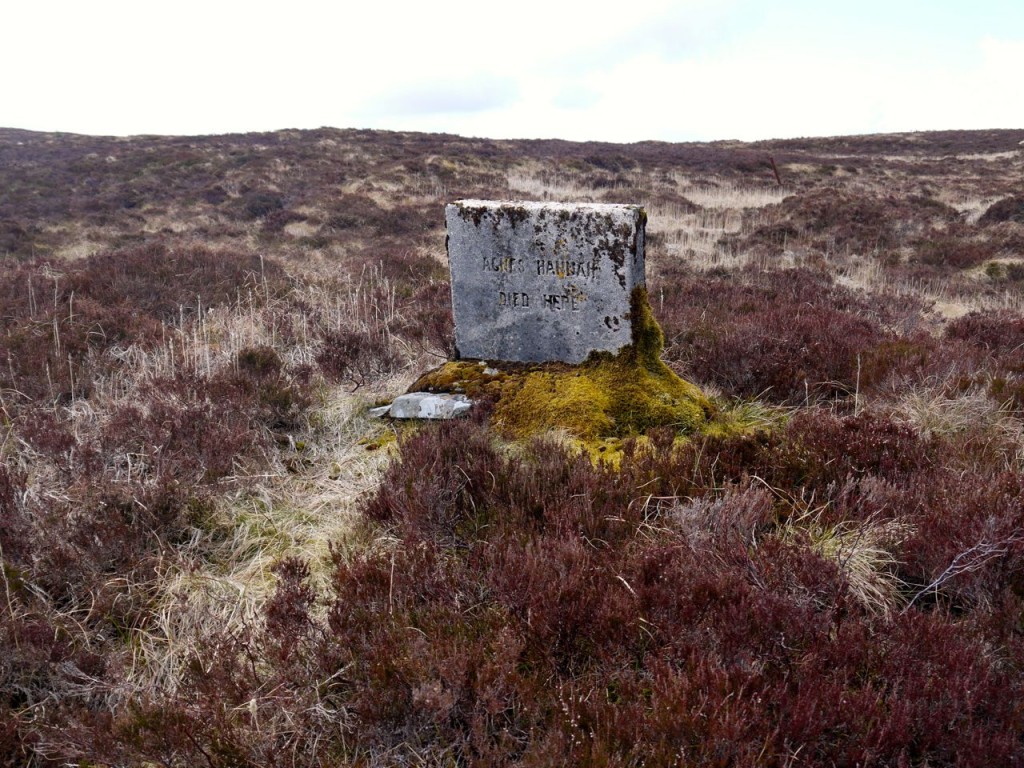 Our walk here had been slow and tiring but we decided to return across the moor rather than use the road. A brief stop for sweeties was upset when Audrey had her jelly baby stolen by Eddie. His Scooby snack obviously hadn’t been enough. An impressively high jump though to give him his due.

Heading back to the car, Audrey, with her eagle eyes, spotted a lone conifer that seemed to have sparkly bits in its branches. Closer inspection showed these to be Christmas decorations. 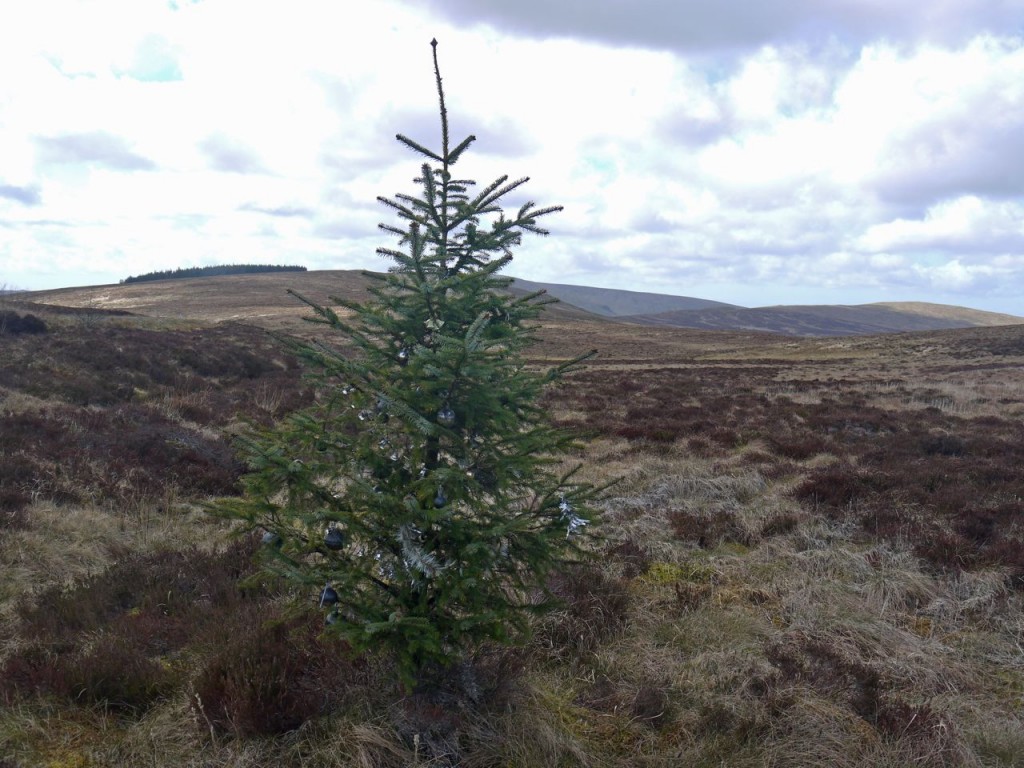 We had thought of having our lunch at the Rosnes Benches on the way back but by the time we were getting close the wind was picking up so we copped out and had our sandwiches when we got back to the car.

At the end I looked at the distance walked on my phone and was surprised to find it was only just over two miles.

The travelling stage had set me down
Within a mile of yon church-town;
‘T was long indeed, a country mile.
But well I knew each field or style; de Kruger, 1829

We had walked two country miles, equivalent to 6 (Naismith) miles I think. 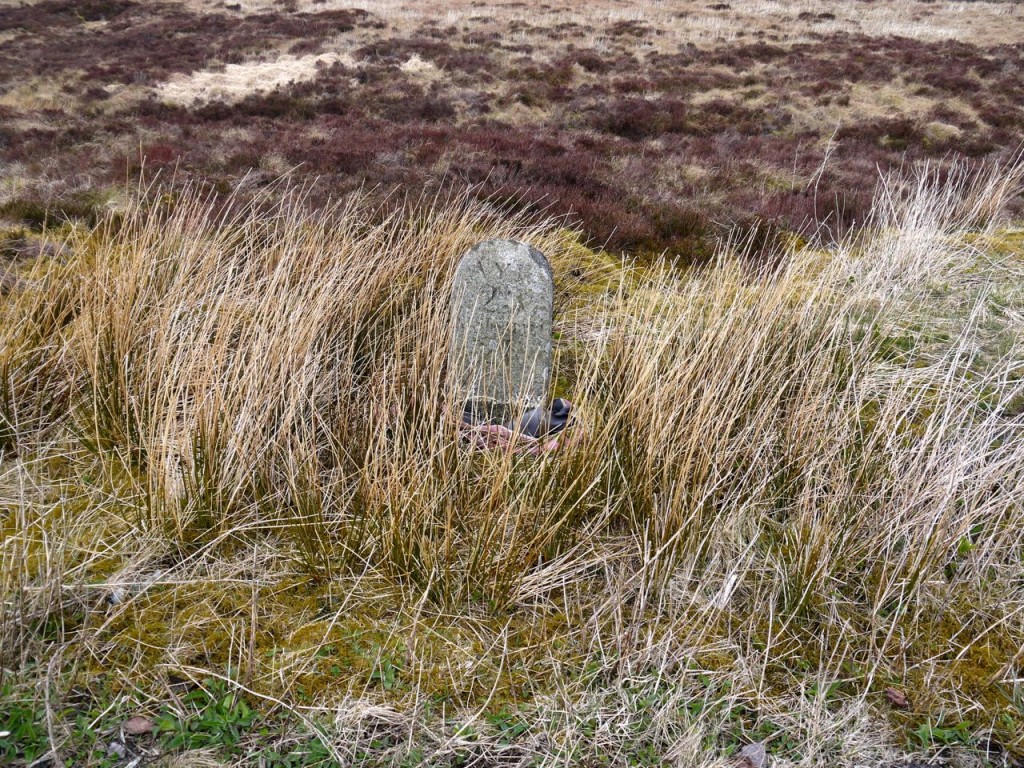 Share this...
This entry was posted in Ayrshire and tagged Rosnes Benches. Bookmark the permalink.