Binoculars. dim. bins; Device worn around neck to ensure no birds are seen. 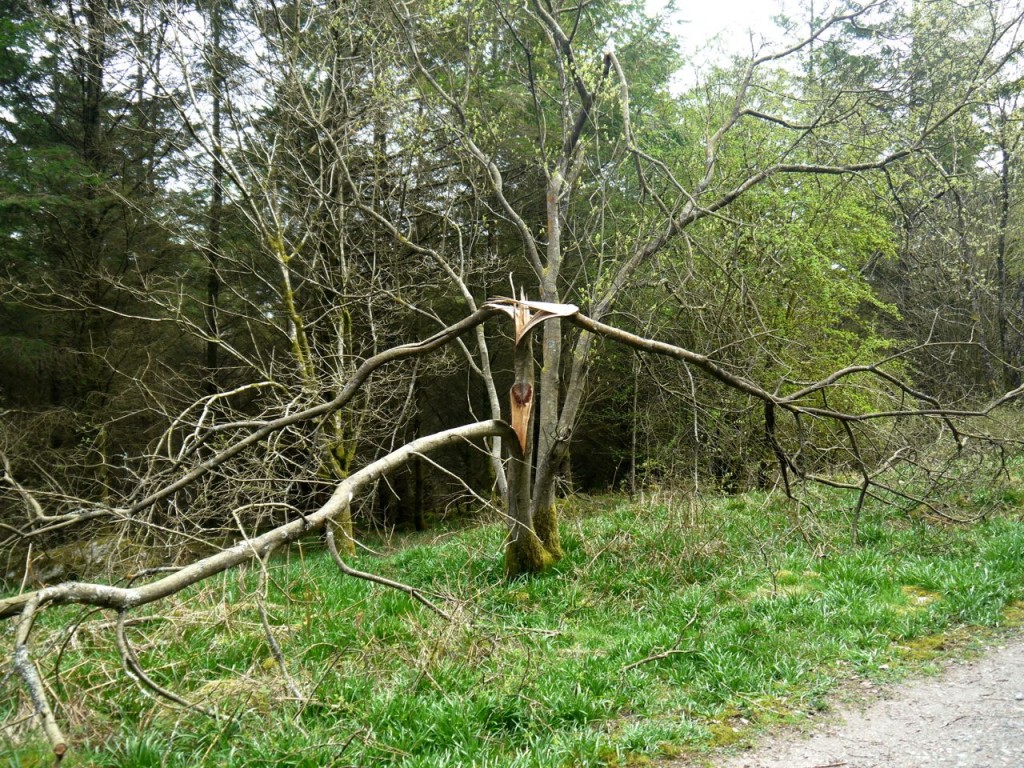 The is the same 4.75 mile route as described in Three Spaniels on Lotus Hill from February.

I sit typing this with Eddie curled up next to me and Sweep quietly snoring at the other end of the couch. They should sleep content tonight. Sweep takes it easy as befits one of his age, but he has had a full day today snuffling in the undergrowth, investigating woods and sniffing the air. Eddie being younger had squeezed more into his day, and all things considered, it had been a good day. Two meals. Two walks. Left-over toast after breakfast and some cheese that fell from a lunch sandwich. Out and about he had pee’d on plants (having got the hang of that cocking the leg up business), sniffed many scents and barked at some dogs, once they were safely away, to warn them they should keep going. He had jumped in streams, jumped in pools, and jumped in mud. He had rolled in deer shit and, when told to stop, had eaten it. There had been doggie treats on the walk and at home. He had chased a pheasant on the moors, some bees among the blaebery and a small unidentified bird that swooped near to him. There had been that dead crow to chew on, and even when it had been wrested from him, he had been able to run off with some in his mouth. At home the ice cream he had been allowed to lick off the stick had tasted nice. He was sure the family had been pleased with him barking at the golfers who had walked past the house. Indeed they had even joined in, shouting his name in encouragement as he barked. As the sun set he had eventually managed to chase the shadows away from the living room and he had even managed to sleep on the couch while still wet and muddy without being noticed. Days don’t get much better than that. 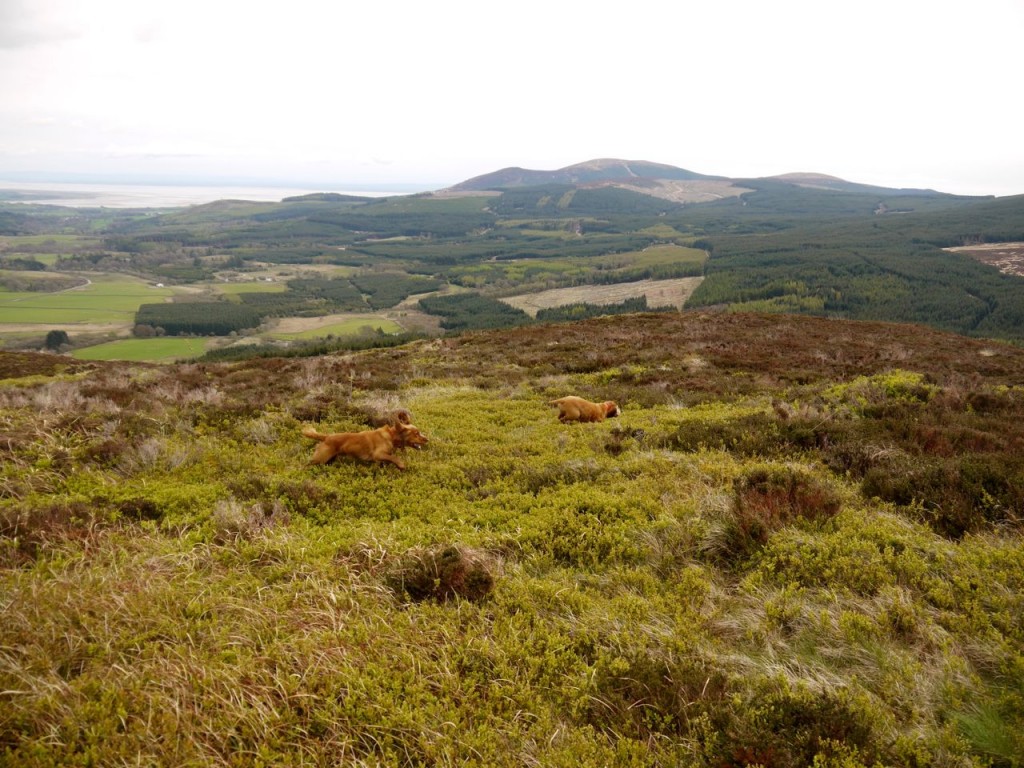 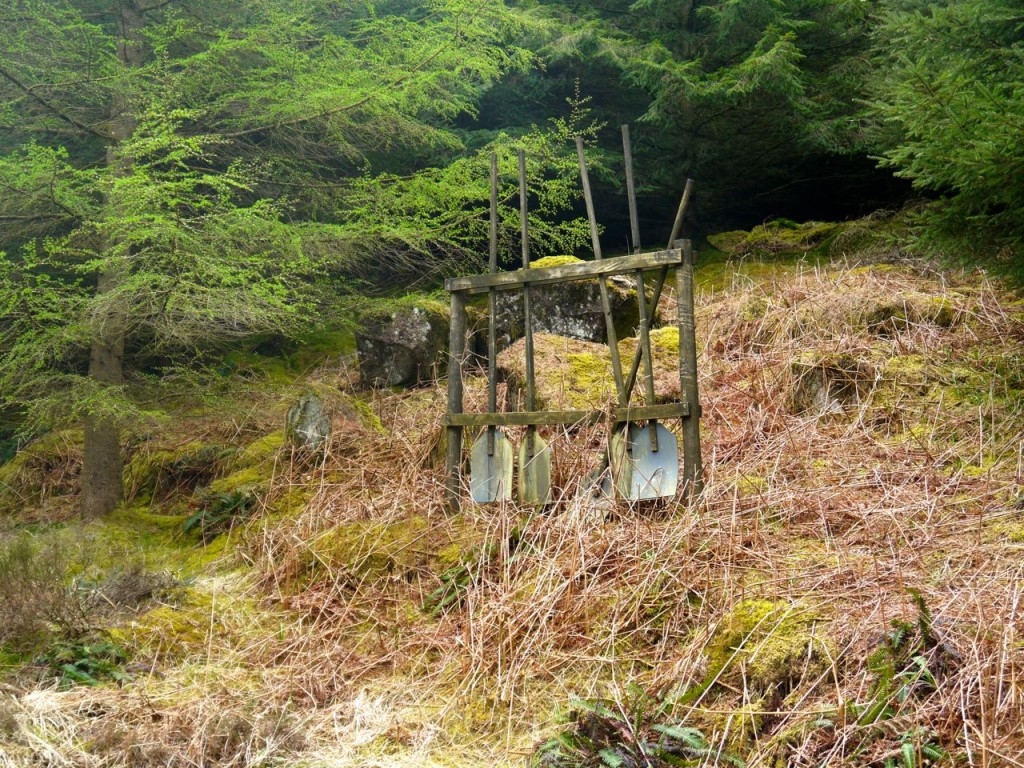 I know where to come if I’m up shit creek

The ground was surprisingly firm, though that’s not to say it was not muddy or waterlogged in places. Certainly gaiter terrain. Especially since the dogs have a habit of suddenly appearing on the piece of ground I am aiming for causing my footfall to be diverted to less firm ground. 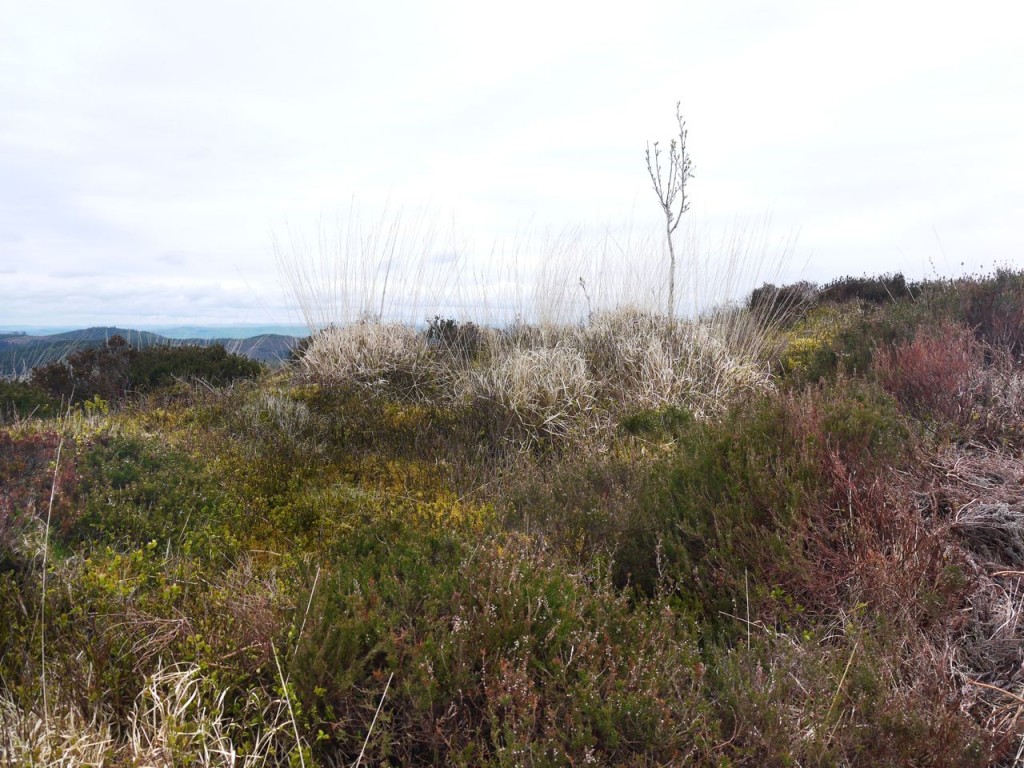 Moorland (the colours were more impressive in reality)

Spring is coming and the colour changes are noticeable. The birches that have stood bare over the Winter have suddenly thrown out their first leaves giving the trees a ghostly translucent green-ness. There are colours sprouting from the mosses. The moors are coming alive with the bright green leaves of blaeberry and the forest floor is carpeted with bright green shoots of bluebells in preparation for the blue flowers. The bluebells are already out in my garden so the forest won’t be far behind. 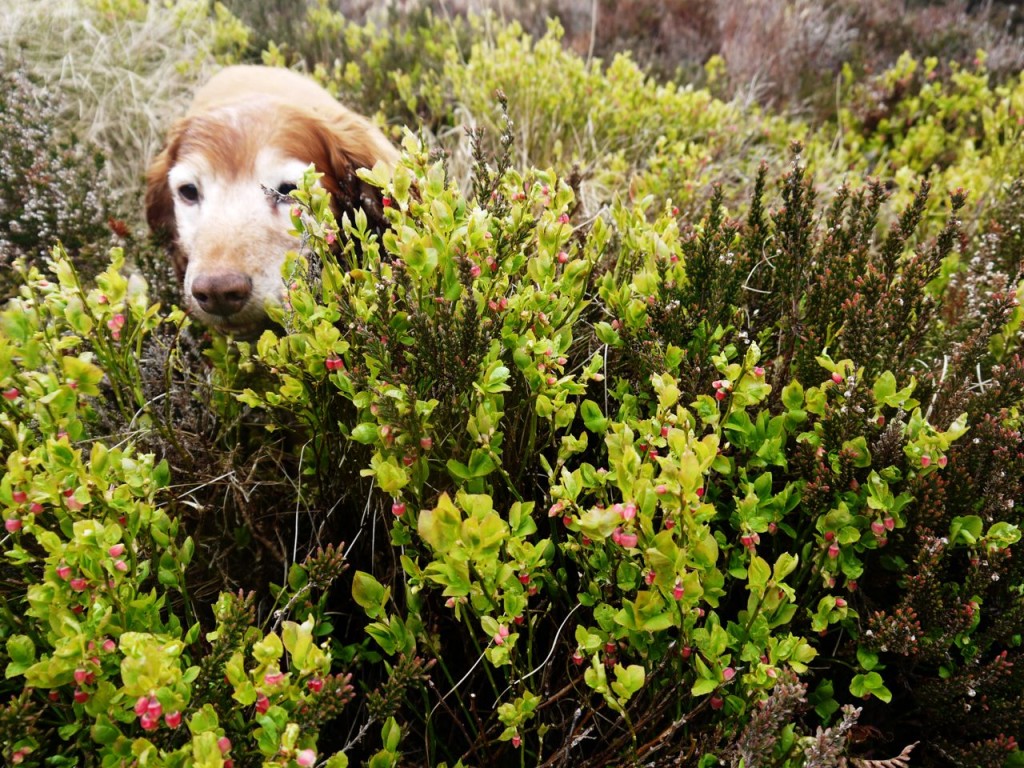 I mentioned that Eddie went careering off after a pheasant, but he was beaten by the terrain, the bird flying up over a rocky outcrop. The dead crow was more of a problem. Eddie came running back to me with feathers, blood and bone in his mouth and thought it a great game that I was trying to get it off him. Using the foot-on-carrion-then-drag-dog-off method proved flawed. And all this in one of the muddy sections. The bird just fell apart and he ran off again requiring a repeat of the process. This took us out of the trees and onto the open hillside. 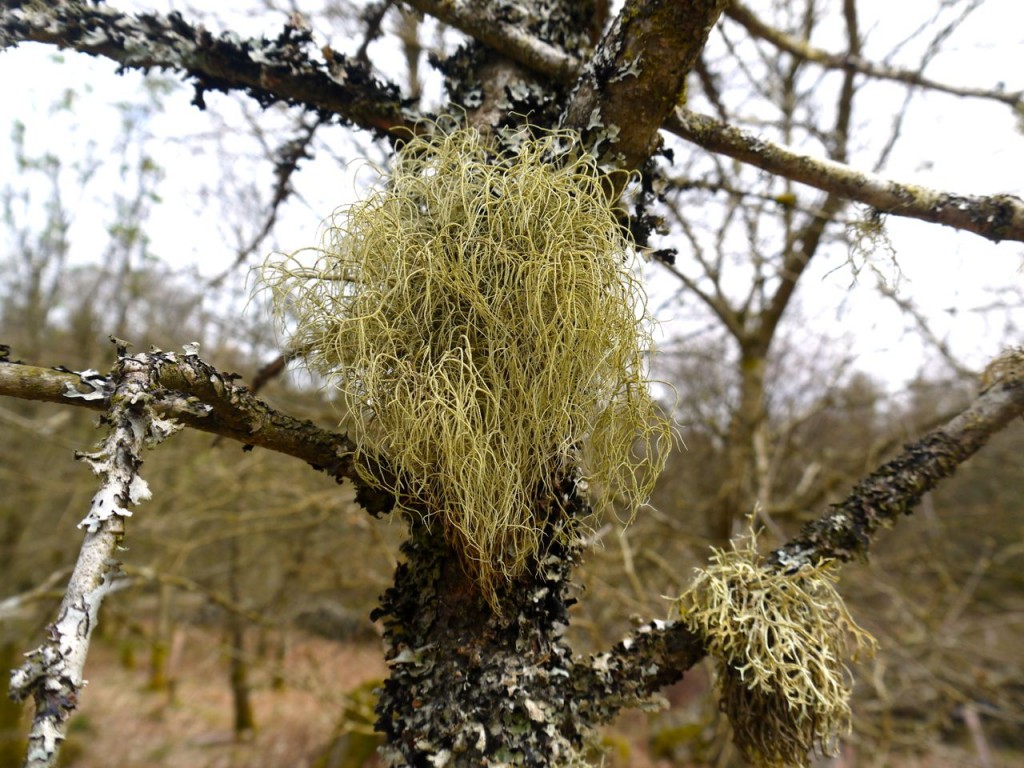 This is the first time I have taken binoculars up Lotus Hill, and I was also gifted good visibility. I was easily able to pick out four of Southern Scotland’s seven Corbetts: Merrick with a line of snow in the lining the Neive of the Spit; Corserine, a chunky hill midway along the Rhinns of Kells; Cairnsmore of Carsphairn with its guard-dog Moorbrock Hill; and Hart Fell to the east. At least 30 Donalds were visible, as well as more distant sights such as Tinto, the Cheviot hills, the Isle of Man and the hills of the Lakes. Nearby, of course, Criffel dominated the scene. I could see the break in the forest with the Pultarson Burn where Conor and I had climbed, amid swarms of insects, a couple of years ago. I looked for Sweetheart Abbey but it was hidden behind Waterloo Hill. 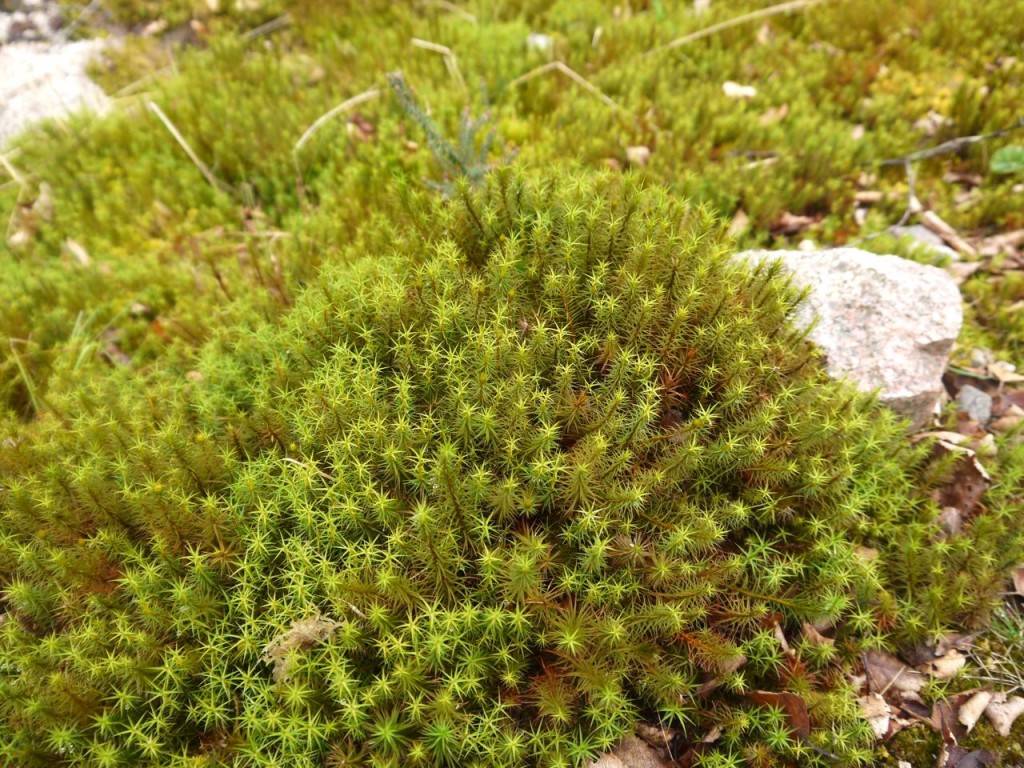 It was surprising to see so many branches ripped from trees and other trees toppled completely. I wondered at first if they had been damaged by forestry vehicles but the same things were present deep in the forest so it must be storm damage, though I don’t recall a recent storm. 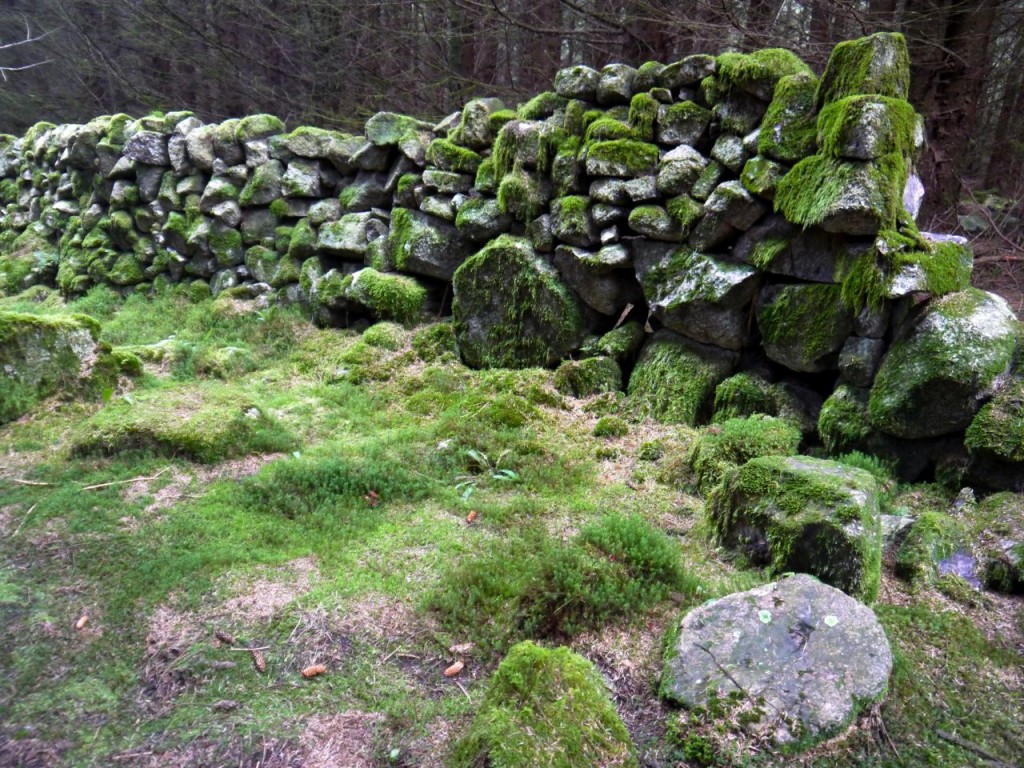 There are numerous boulders (granite I think) scattered around this hill and the forest break running south from the hill has some particularly large examples. There are also, however, some softer white rocks. An area of felled forest seems filled with these white rocks and I walked over some on the open hill. This white crystalline rock was hard and sharp but had crumbled into smaller pieces. It looked like quartz but I’m surprised that it is breaking up. 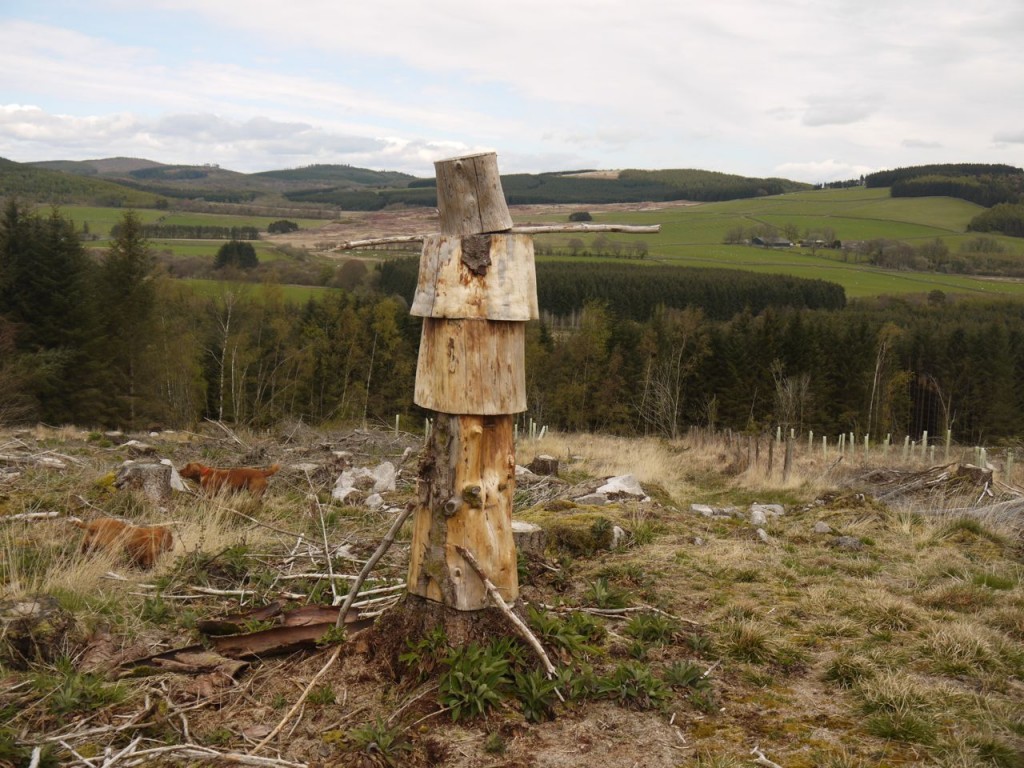 The only other change to mention is that the various totem poles among the felled forest below the forest track have been developing. One now has some branches affixed to look like arms.

And here’s a few more photos. 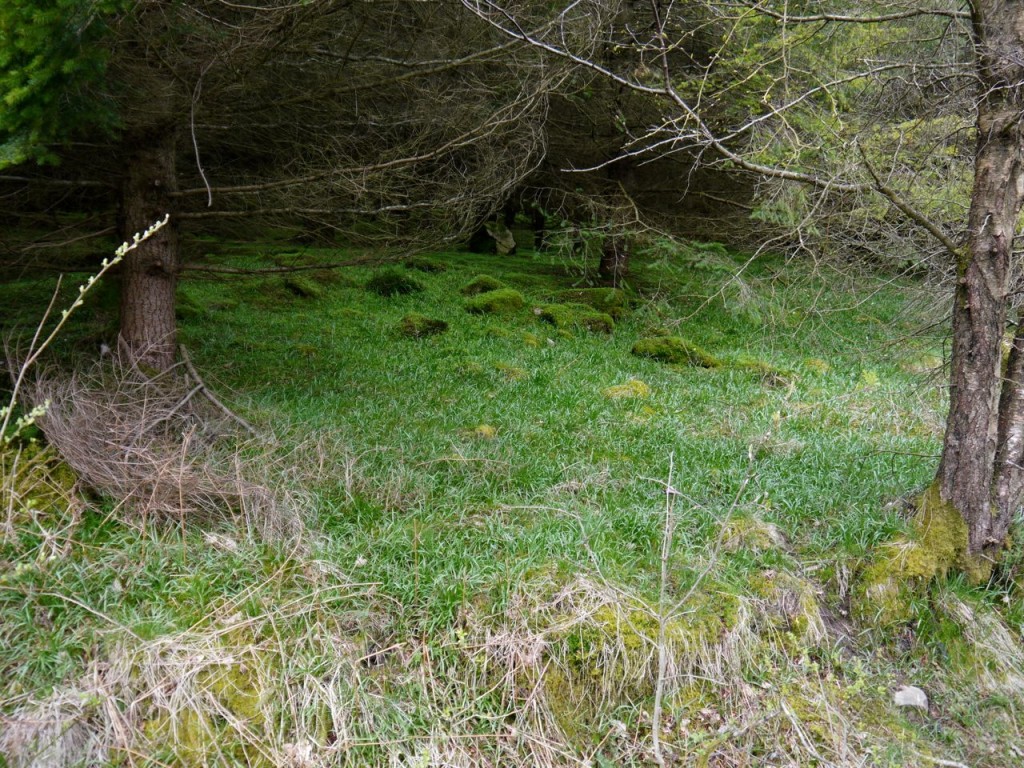 Bluebells will soon be here 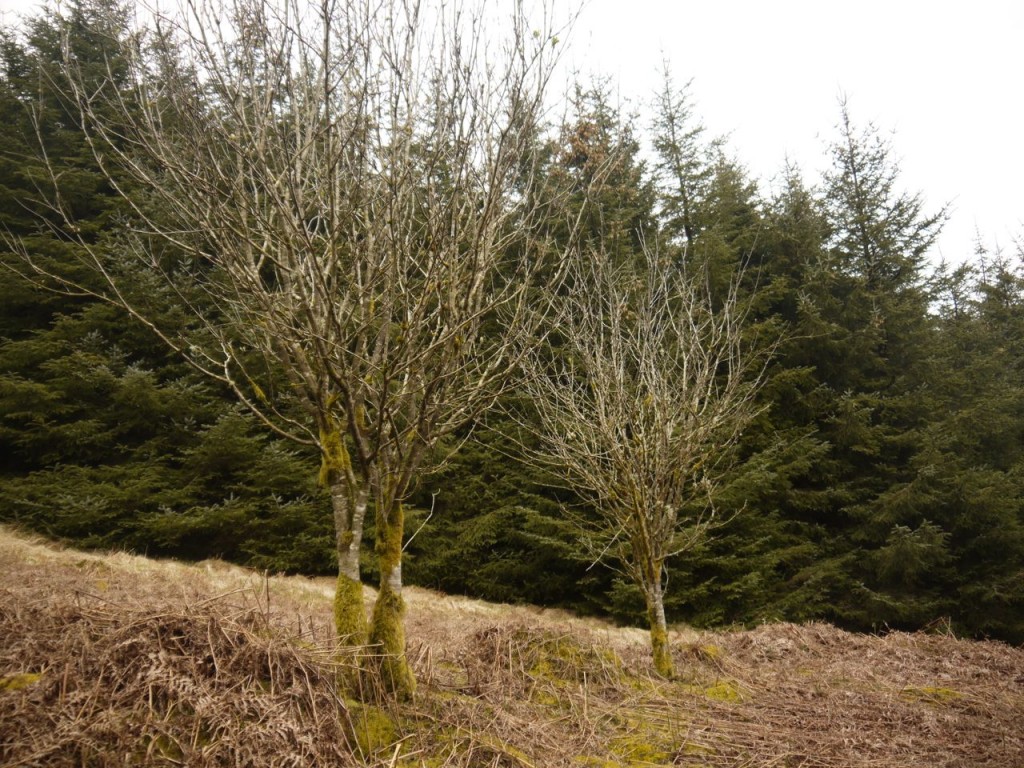 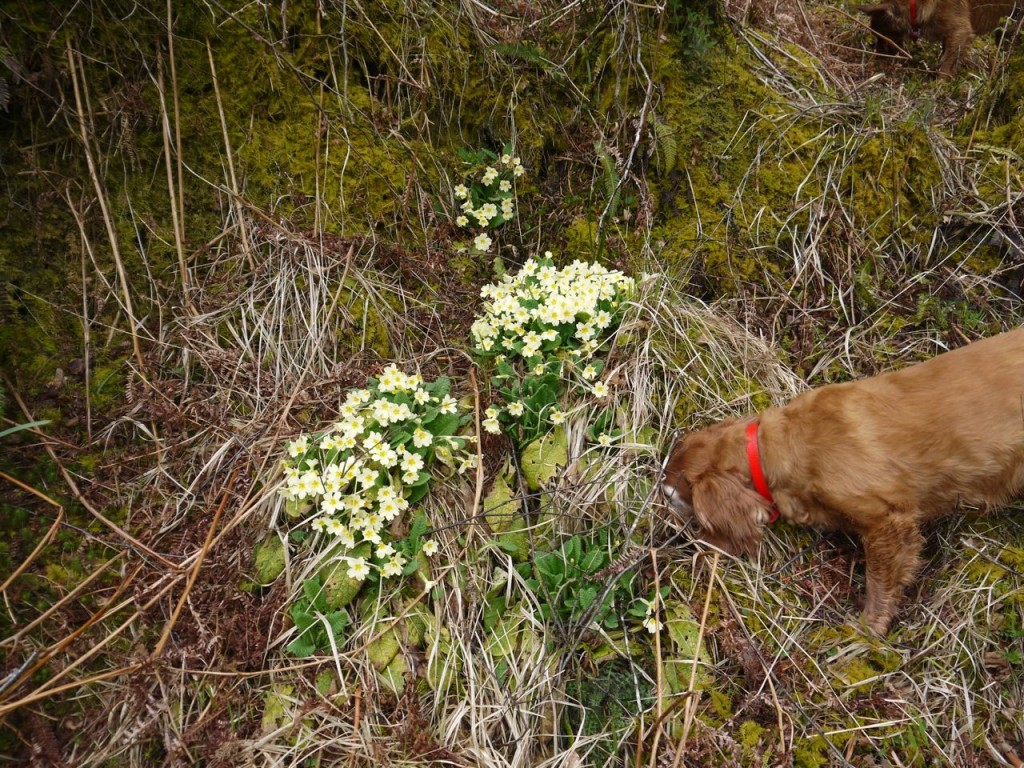 Share this...
This entry was posted in Dumfries & Galloway and tagged Wee Hills. Bookmark the permalink.