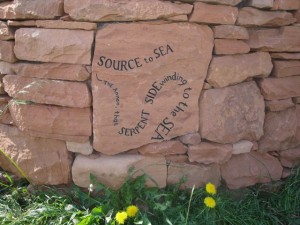 Congratulations to all on completing the Annandale way.

The forecast earlier in the week had been for rain, but the meteorologist’s inaccuracy was our gain, a warm dry day.

Having dropped off a car at the end of the walk we headed for Hoddom castle to start out on the final leg of our Annandale Way walk. We walked down to the footbridge at Mainholm, where we had left the Way last time. There was a tree devoid of branches on the other side which none of us recalled seeing before. I’ve looked at the photos from that walk but none were taken in that direction. Perhaps Vivienne will remember?

I unfortunately was hobbling along for the first few minutes and didn’t get into my stride until I had re-tied (loosened) my laces. Perhaps I’m allergic to golf courses.

We crossed our first bridge at Hoddom and turned right following the eastern bank of Annan water. After about 300m we passed an old graveyard, which is on the site of a monastery built in the sixth century by St Mungo. Eagle-eyed David spotted a heron in a tree and was our spotter for hidden Annandale way signs later in the walk. I wonder if he’s got one of those Steve Austin eyes.

We left the riverside only once to walk along Mein Water, passing cornfields, a ditch with algal bloom, a mare with her foal and even Nessie (see the pictures). Then over our second bridge and back along Mein water to the Annan.

Let me just say that I do enjoy learning new things and my enjoyment in this regard today was learning that my rule of thumb for identifying cows is wrong. As we walked into a field filled with beasts, we mused and joked about our meeting with the bull guarding the Roman road near Moffat. I shared my view that we were safe because bulls are usually alone and since this field had a dozen beasts they must be cows. The beasts’ and our paths were set to intersect and as we drew closer it became obvious that we were walking towards a dozen bulls. I think this was the only time I have heard Elaine use the word she did. The discretion:valour ratio directed us to give the beasts a wide berth and our pace did pick up according to the GPS.

This excitement was followed by a mellowing stroll through riverside meadows filled with pink and white flowers, before arriving in Brydekirk, crossing our third bridge and seeing another heron. Brydekirk seemed quite a sizeable place, or at least the church seemed quite a way from the bridge. We were now on the west bank of the Annan and headed south along the riverbank past Mount Annan watching the river grow as we walked.

The A75 bridge eventually came into sight and we passed under it before crossing the Annan on a footbridge (our fourth bridge). The pathway led us through a park, with rugby posts, and more importantly for us some benches to let us rest our weary feet and take on some food. What a psychological effect this can have. After eating a roll, banana and cereal bar, and putting a banana skin in the bin my rucksack felt dramatically lighter.

I had thought the walk would be along a street in Annan and was pleasantly surprised to find that the riverside walk in Annan was a well maintained and picturesque path with good views of bridges and wildlife (ducks).

We crossed the Sustrans bridge (fifth bridge) and circled right to head left. There was a National Cycleway millennium milepost (designed by Andrew Rowe) here which is said to reflect industrial and nautical motifs.

From here the path continued along the west bank of the Annan, through flatter wetland with the large industrial complex at Newbie coming in to view. We crossed our sixth and final bridge in the Milnfield Merse.

Once past Newbie the Anthorn radio masts with Skiddaw in the distance were directly ahead. To either side were fields with heiland coos and lowland cows. We eventually reached a shingle beach and walked along it for a few minutes with Criffel directly ahead. It was only on returning from the beach to the path that we found a sign warning us about the quicksand.

And then there was the cairn marking the end of the Annandale Way.

Share this...
This entry was posted in Dumfries & Galloway and tagged Annandale Way, Low Level, Paths. Bookmark the permalink.