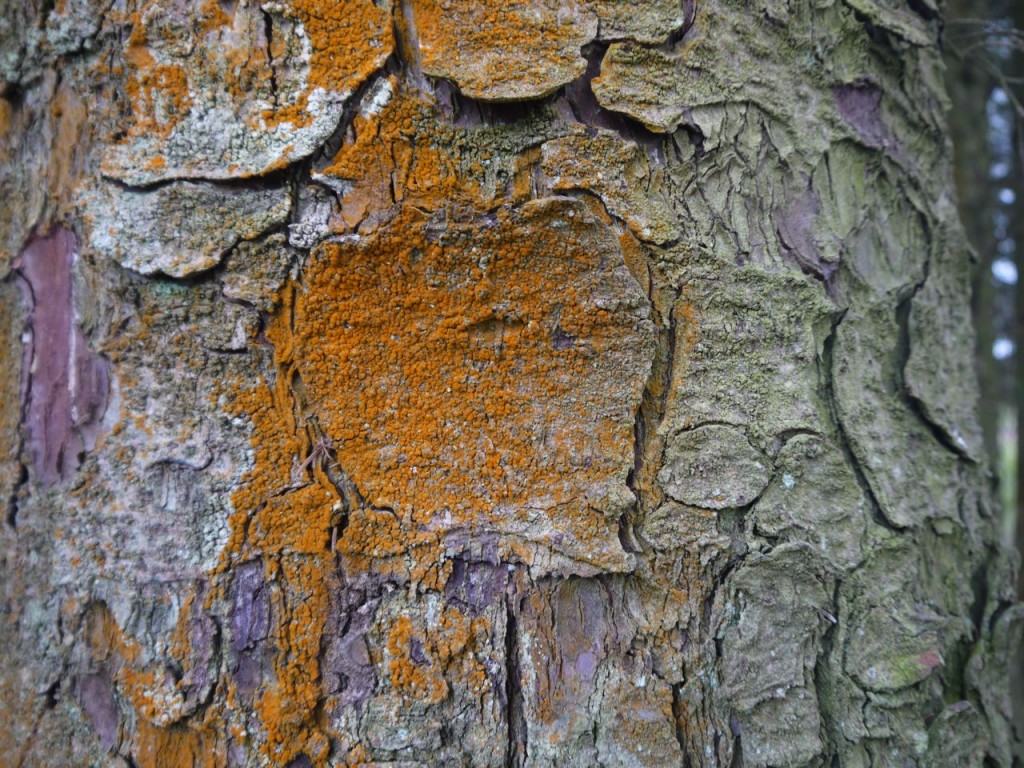 An unusual day out, the distance and time is made up of three walks joined by short hops in the car. it was cool enough for fleeces and though we had a few spots of rain on the windscreen when on the Queen’s Way, we had none while walking.

We began in the car park among the pines by Clatteringshaws Loch. Audrey drew my attention to the hollow sound of our footsteps on the forest floor. I hadn’t noticed it but she was right. I could hear a hollow timbre to both her footsteps and those of the dogs, but not my own, though I could feel the quality of the ground as I walked. I don’t think I am particularly light footed so this must represent some form of filter in my perception. 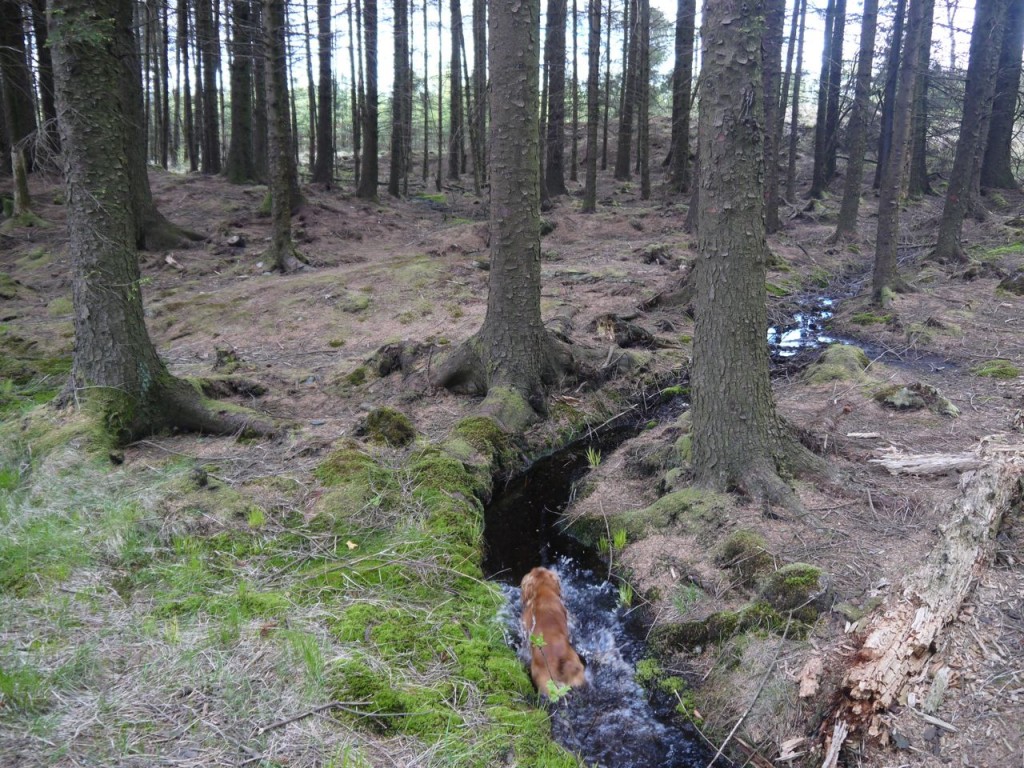 The Rosnes Benches were at the edge of the woods only a few metres from where we had left the car so we decided to visit them on the way back. By then we would have had more time to shake off the ambience of the car journey and better enjoy the view.

A narrow man-made footpath led us to Bruce’s Stone on Raploch Moss. There was Bog Myrtle beside the path, and having identified it a couple of weeks earlier we now find everywhere, and now the catkins are being joined by small leaves. The catkins are now somewhat brittle and leave a pleasant menthol scent on the fingers when crushed. 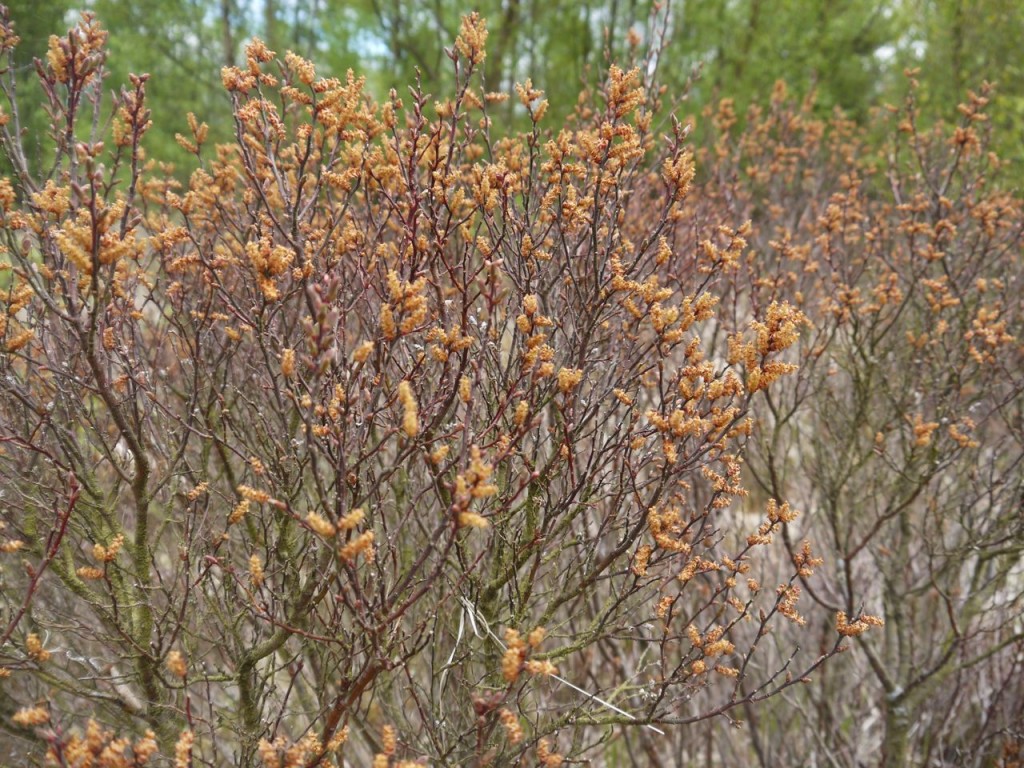 There were a variety of wild flowers, including cuckoo flower (lady’s smock), cranesbill, violet, and forget-me-nots and new growth of a variety of grasses.

Bruce’s Stone sits at the end of the footpath. Bruce is said to have rested here after his victory over the English on Raploch Moss in 1307. This natural granite boulder stands perhaps 150m from the waters of Clatterringshaws Loch but would at the time of the battle have overlooked the moorland of Raploch Moss. This extensive moor then lay between the Black Water of Dee, Clatteringshaws Lane and Benniguinea, but was flooded to create Clatteringshaws Loch as a reservoir with the construction of a dam in 1932-34.

There is no official record of the battle though bones, helmets, swords, daggers and spears were said to have turned up over the years. There was a local tradition that there had been a battle here and that this boulder, referred to as the King’s Stane, is where Bruce’s Standard was raised.

An information board by the boulder doesn’t give any more specific information but suggests Bruce set upon a sleeping English Army in their camp. The eagle eyed will notice that the board’s drawing of Bruce resting on the stone has the loch in the background, a premonition perhaps that the land where the battle took place would be cleansed? Or an artist given an inaccurate brief?

We walked a little further north of the boulder picking our way through increasingly boggy ground until we had had enough. I had thought to head across to the loch and back along the bank but a combination of saplings, uninviting terrain and a desire for dry feet put me off.

We returned along the same path, then headed through the trees to the Rosnes Benches. I must have altered something on my camera here because several images were marinated in green. The benches are at the edge of the woods and look out across the loch to Darnaw, and Craignell. The trees and the benches are a little higher that the ground around the loch and though they were separated from the water by 150m of boggy ground, with more bog myrtle, nearby debris suggests that when the loch is fuller the benches will sit close to the water. 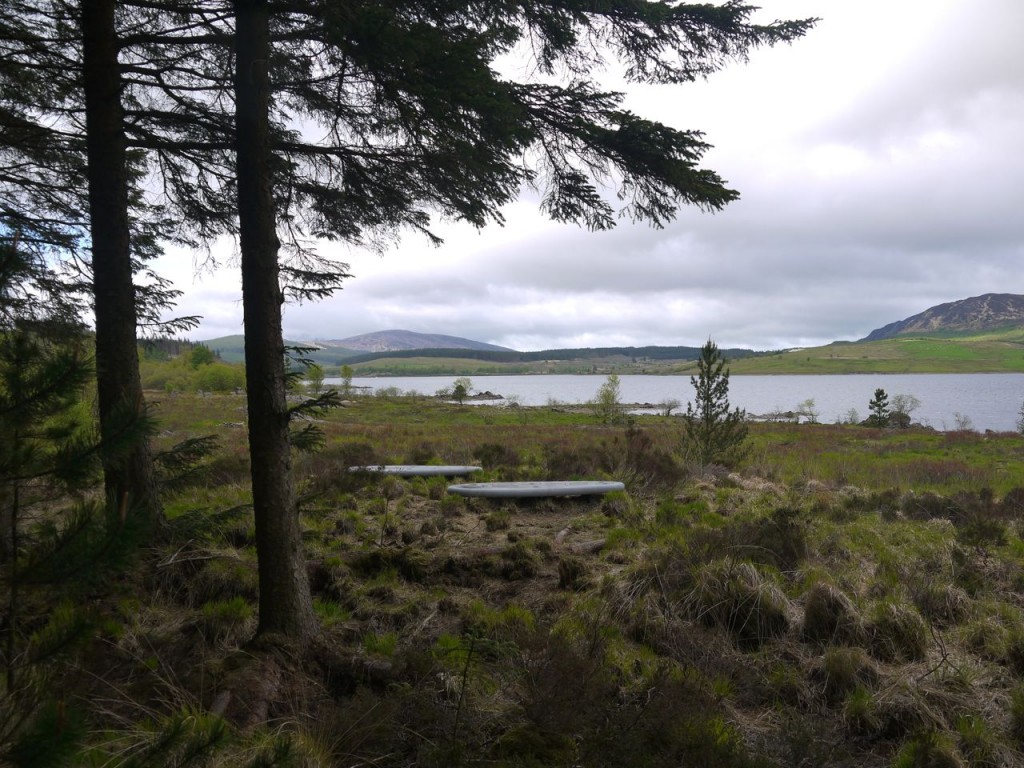 On the short walk back to the car we investigated a fallen that had left beneath it a flat granite pavement with a chunk missing, the chunk still embedded in the tree’s roots. A chair made from a log stood inviting the unwary. I sat on it with care and can confirm that it is a rocking chair, or unstable, however you prefer to think of it. I didn’t rock far enough to test its instability.

There was both orange and purple lichen on trees, a star made of branches fixed to a tree, and tussocks sprouting new growth giving them the appearance of a group of muppets taking a mud bath. 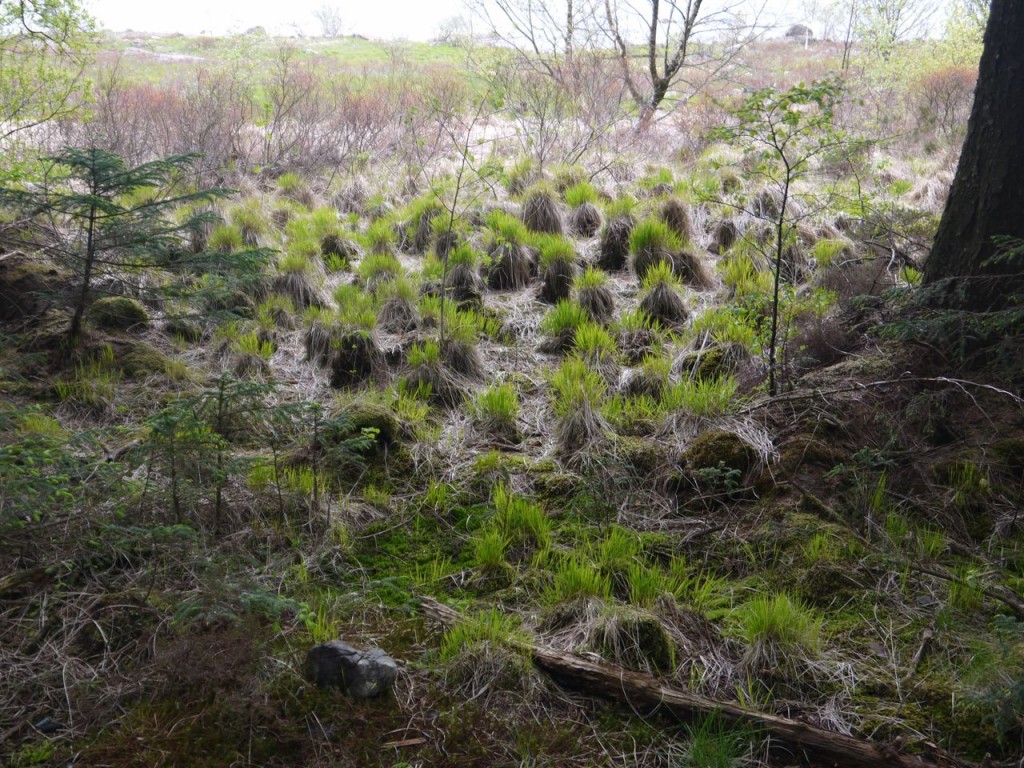 We had a brief ride down the Raiders Road, with me recalling the rather challenging visit to Cairnsmore of Dee some years ago with David. I had forgotten how far along the road we had walked before turning for the hill. Ah, tussocks and felled forest.

The car park at the Otter Pool was empty of visitors, but forestry workers were there strimming the grass of the picnic areas. Auto-correct had them strumming the grass, which would have been an interesting experience. The alternative world of autocorrect is perhaps a modern equivalent of Carroll’s Through the Looking-Glass freeing us from the constraints of reality to expand our imagination. I can imagine a tradition going back through the generations where the young men go strumming the grass to raise bewitching melodies. As it was they were strimming, their noise putting paid to any appreciation of birdsong.

A stone otter sits, holding a fish, looking across the waters of the pool as he has for many years. His details are looking a little weathered now, having waited so long for the music of strumming grass to bring him back to life. 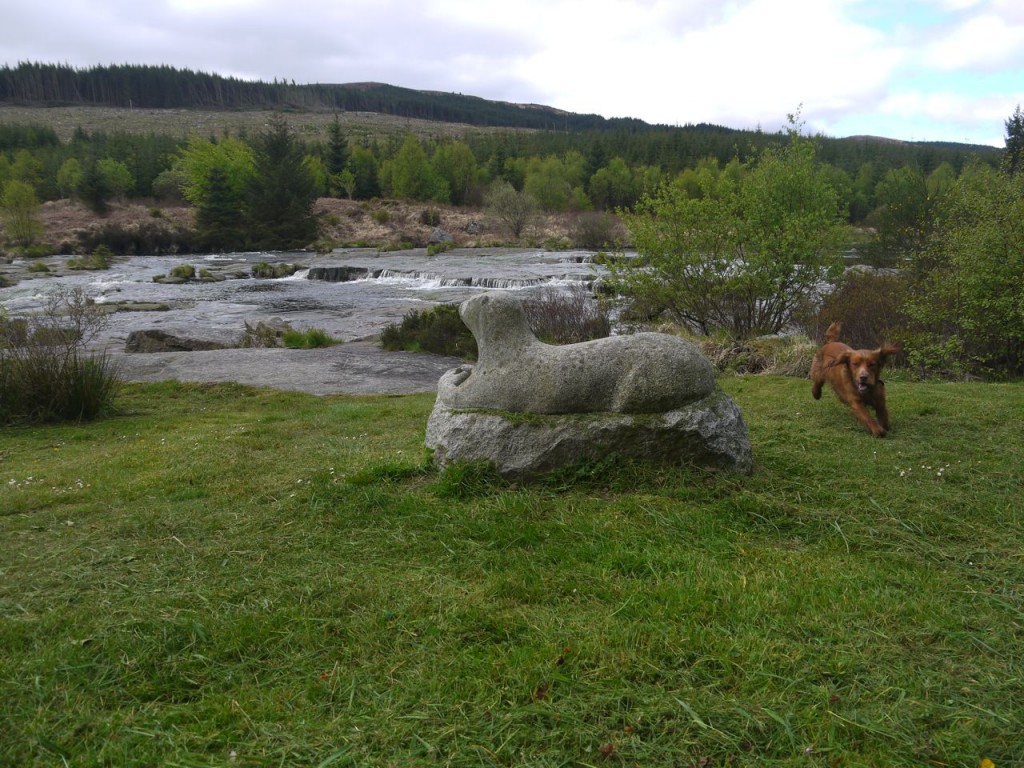 The dogs had a paddle in the river, Sweep showing himself to be more adventurous in the water than Eddie, but the water was too full for the humans to easily reach the other side. I had intended crossing the river here and walking along the forestry tracks of the far side so we needed a change of plan. 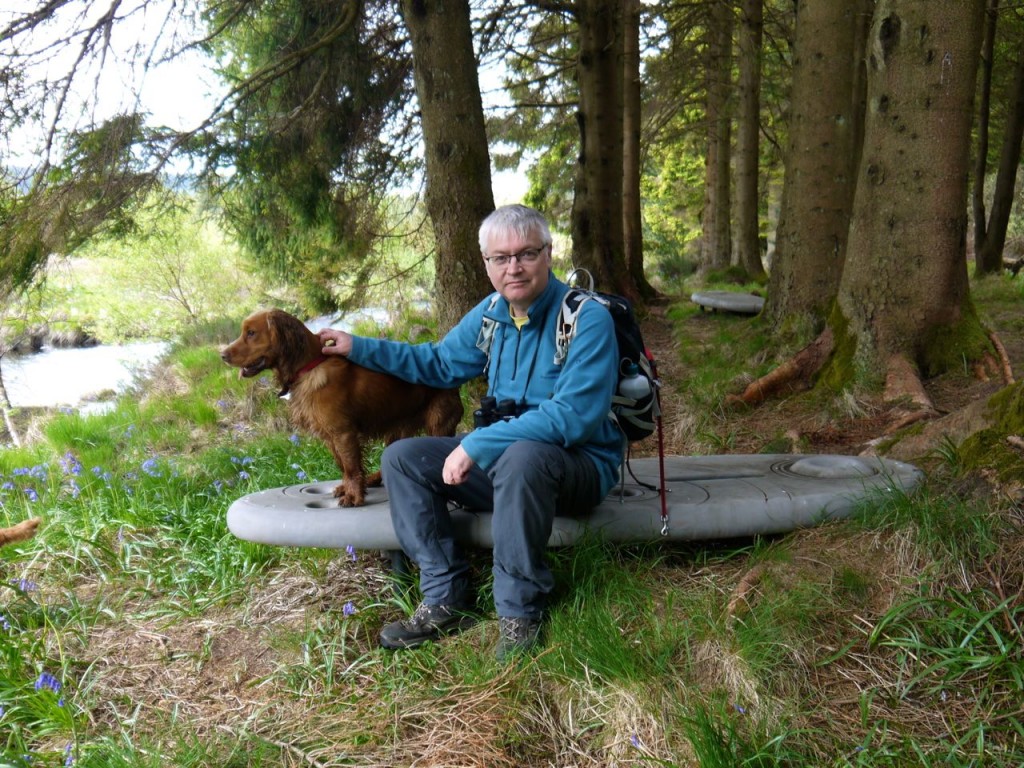 We strolled along the bank into the trees. The greens and browns supplemented with blue of bluebells, pink and white apple blossom and bright yellow broom. The three Rosnes Benches were among bluebells at the riverside and this time my camera’s white balance behaved. We could I suppose have wondered back and further along the bank downstream but with the forestry chaps working it wasn’t safe to have the dogs running near them. 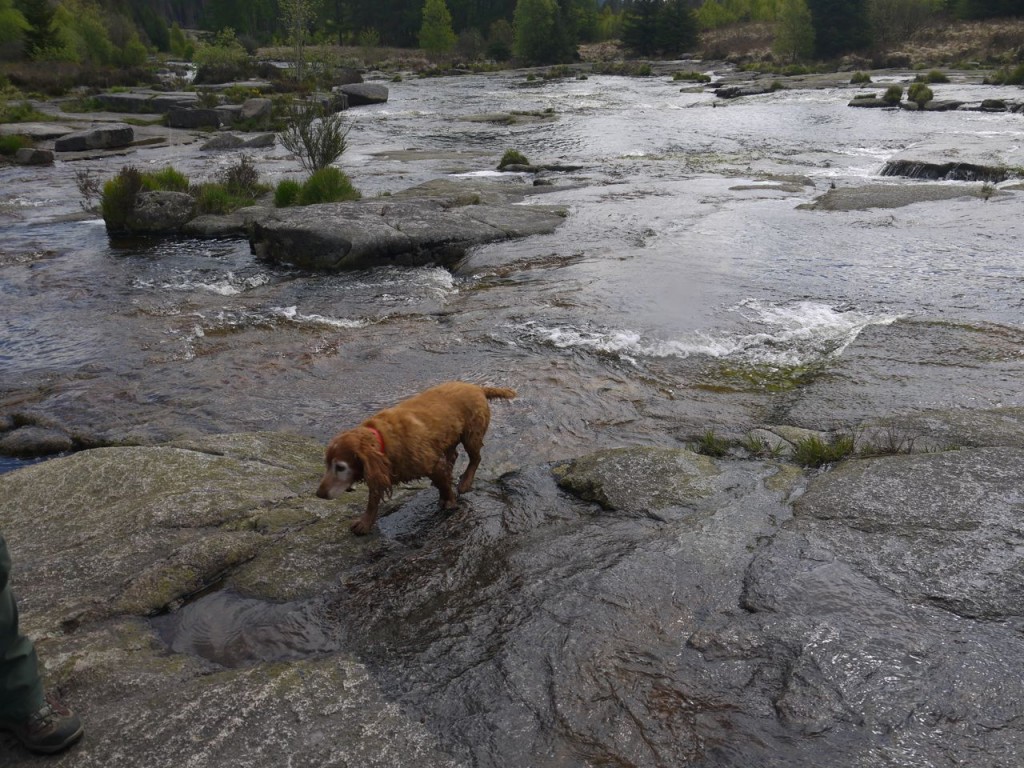 Just before leaving I heard another bird calling to Sweep…”hwee”. Last week I had thought this sound was from a wood warbler but now I wonder because this time we could see the culprit clearly, a chaffinch.

Stroan Loch probably takes its name from sron, literally a nose, though often applied to headlands. There is a small car park at the southern end of the loch with a memorial to the late Charles Parley, Forester-in-charge of the Bennan 1947-70. “The afforested panorama visible from this point is its own testimony to his boundless enthusiasm energy and loving care above all he is remembered for his kindly nature which made it a pleasure to work with and for him” 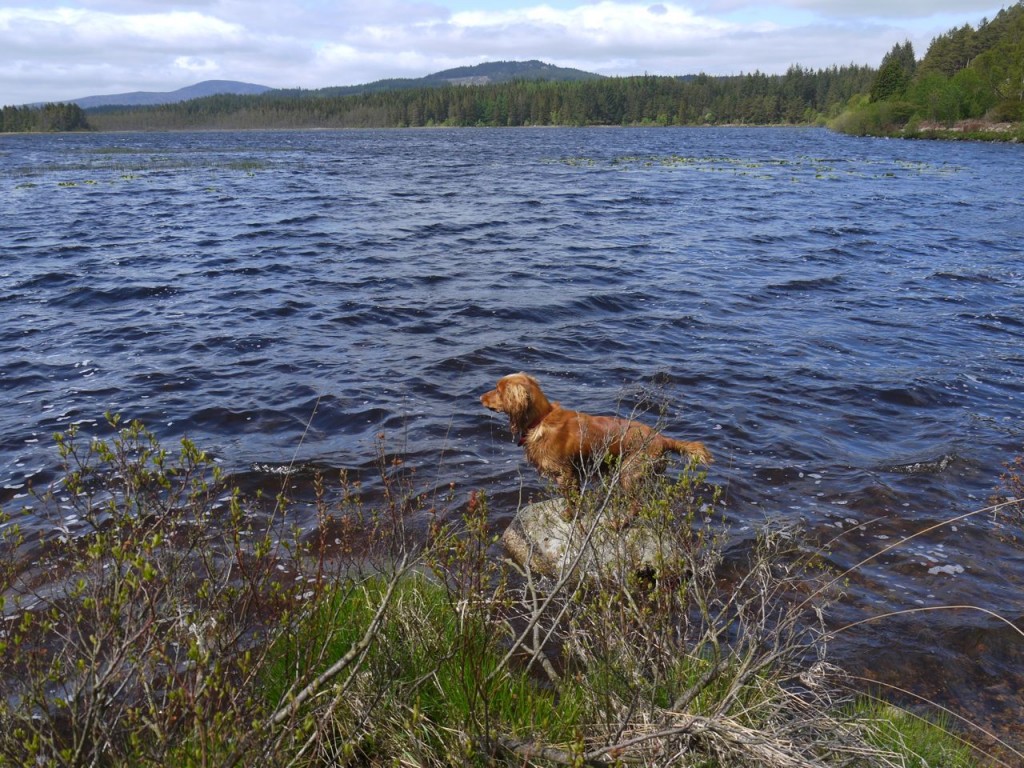 We went through the gate onto the disused railway track. This was the Stranraer to Dumfries Port Line, often referred to as the Paddy Line, that ran from 1859 until the Beeching cuts in 1965. With no pre-planned route and having driven off the bottom of the OS maps I had brought along we turned towards Mossdale. 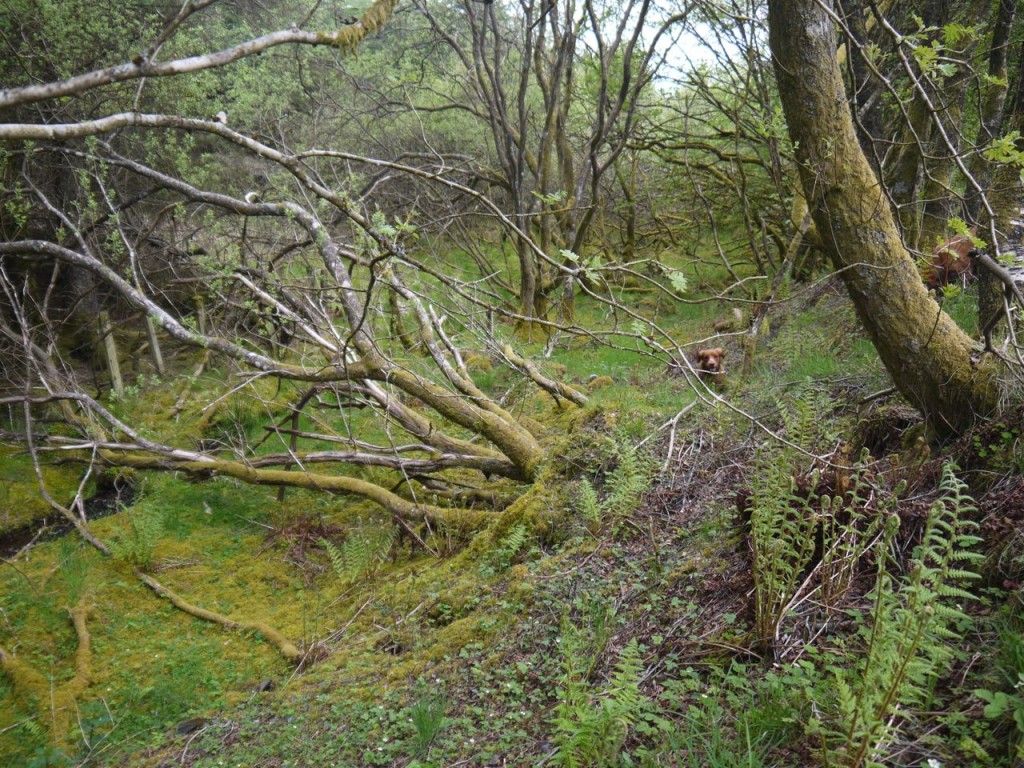 Woods by The Paddy Line

The path ran through a cutting with moss covered rock walls overhung by trees in full leaf. A willow had fallen from its perch at the top of one section but must have either been left with some intact roots or re-rooted itself in the rock, and despite lying below the canopy, shoots grew from the fallen trunk, their leaves making use of the remaining light.

Once out of the trees we were on a raised section of railway looking over the tops of the conifers on either side with a view similar to that seen from cable cars when skiing. Bennan, mentioned on the Stroan Loch memorial, stood proud to the north. The hedgerows had a good variety of flowers including wild strawberries.

In the distance we spotted a circling raptor, and with the binoculars this was clearly a red kite. Luckily for us it chose to drift closer  and eventually flew by giving us an excellent view of its plumage. We were to see it, or another kite, twice more. When driving home yet another red kite flew by carrying something in its talons.

At a gate the forest gave way to farmland, and sheep. There was a tempting waymarker post beyond, presumably one of the red kite trails, but rather than constrain the dogs we turned about and headed back.

On the return journey we noticed a faint path in the woods to our left and after a bit of jungle work managed to reach it. Unfortunately within a few metres it was really too overgrown to follow and I worried that if I let any more branches flick back into Audrey she might lose her calm demeanour. 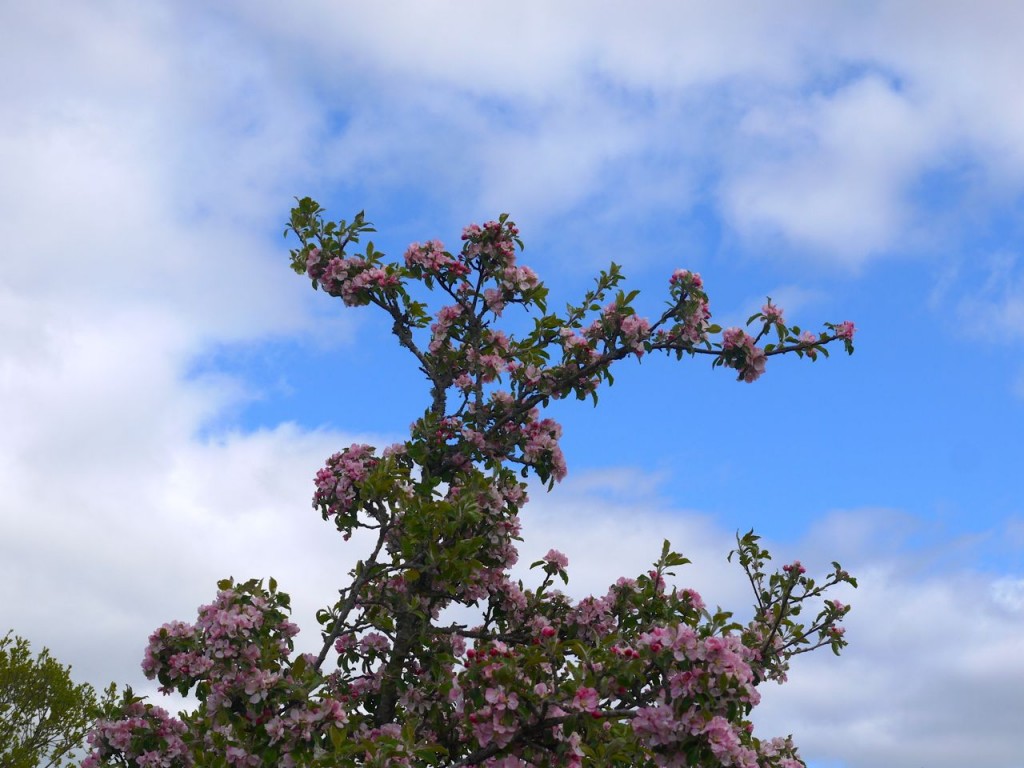 A little later we did leave the railway for a clearer track that led us back and beneath the viaduct. We still had quite a bit of walk left in us so we headed back to the gate, repulsing a surprise attack from a pack of sausage dogs (i.e. Eddie ran away from them, with tail between legs), and headed west along the Paddy Line.

There were black headed gulls on the loch and I had given them little attention but when on the viaduct one flew across and Eddie took off after it, jumping up onto the parapet of the bridge. That bloody dog can jump much higher than I had thought. I rushed him off the bridge then waited for my heart to slow before continuing. He crossed on a lead on the way back, and Sweep, just in case. 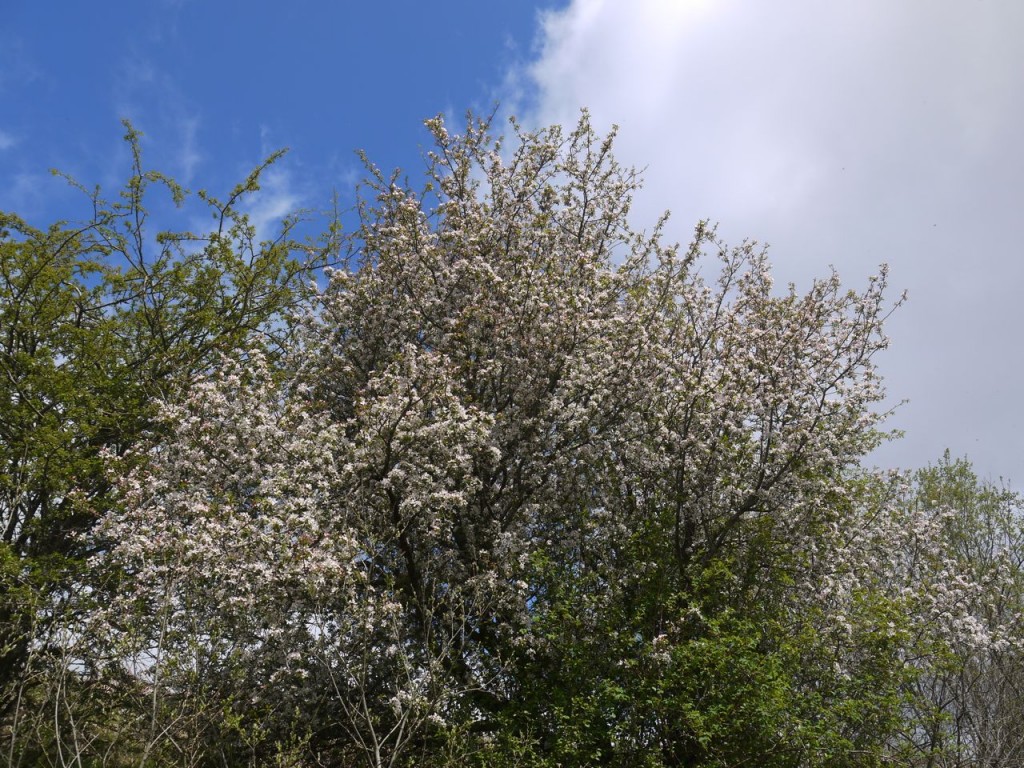 We passed hawthorns in various stage of bloom, some with very early blossom looking like heads watching us to trees in full bloom. Why trees in very similar positions should be in different stages I don’t know.

A large roe deer watched us then bounded into the trees unnoticed by the dogs, who also ran straight past an adder lying on the path. Eddie did though run after butterflies and small birds, or their shadows. When we came to stop for lunch we rested on a boulder among bracken on a slight rise above the path. Here Sweep’s snuffling turned into digging and he had a good go at pulling a root out of the ground. Eddie stuck with chasing shadows and when they faded as the sun passed behind a cloud he too took to digging for the lost shadows. He managed to wash off the mud a little later when he ran onto some moss that turned out to be floating on a pool deep enough to give him the full immersion treatment.

As ever it was Sweep who called time on our lunch break. He started barking and we had the strange experience of the sound echoing off the nearby trees. I can’t say I’ve noticed that phenomenon before. 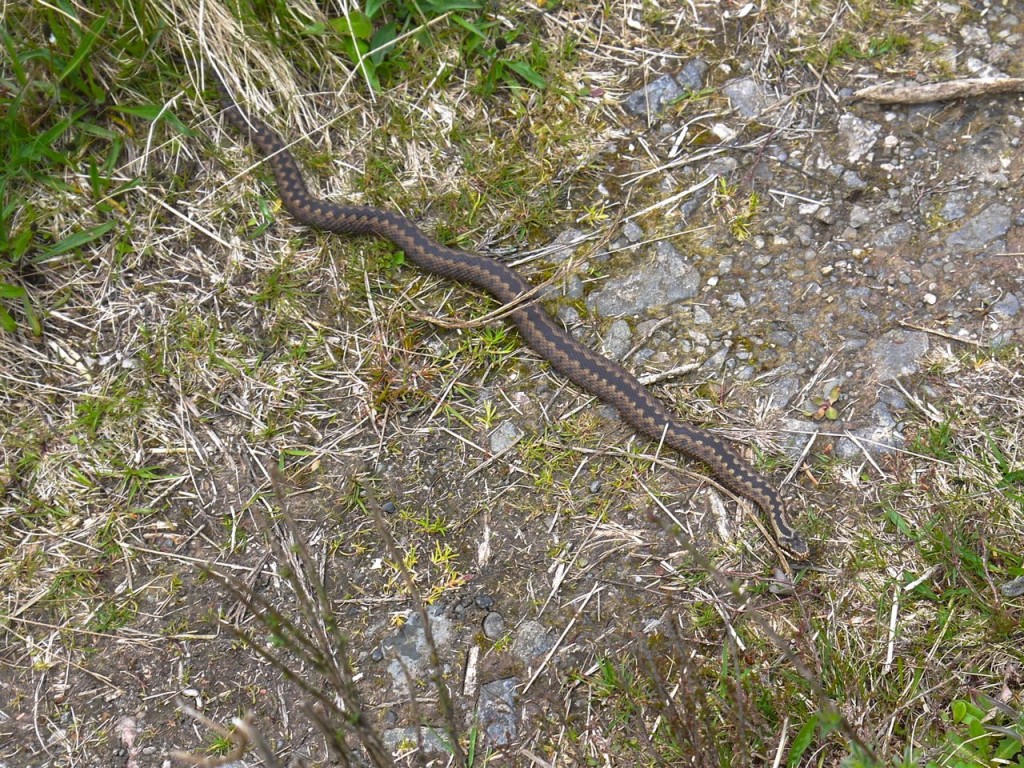 We had intended walking out to Skerrow Halt but Eddie got a sore paw a mile or so short of the destination so we headed back. I didn’t know if I would end up carrying him but he was back to running and jumping normally within a few minutes.

Back at the Loch side the dogs had a chance to wash off any remaining mud and have a drink.

Five Rosnes Benches in a day.

Share this...
This entry was posted in Dumfries & Galloway and tagged Low Level, Rosnes Benches. Bookmark the permalink.