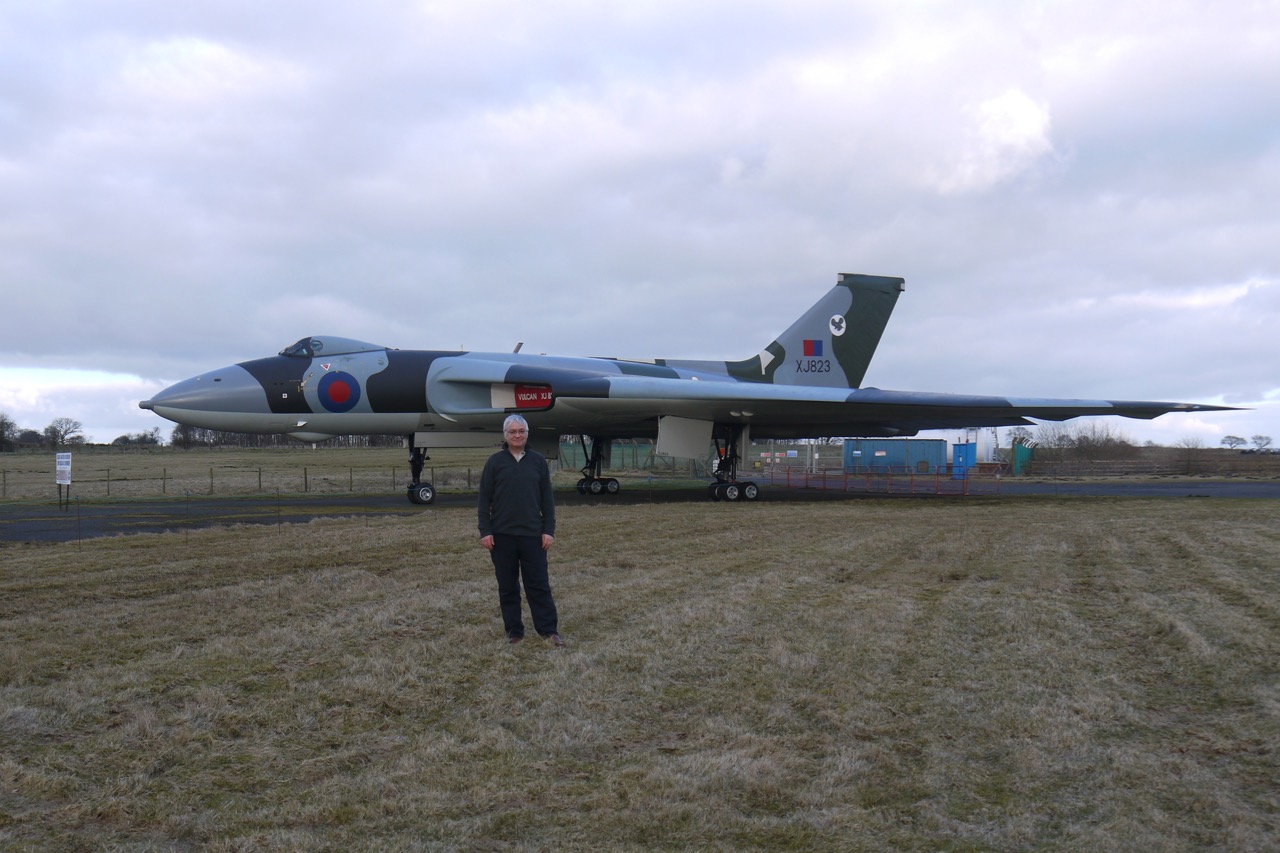 This section of the route was relatively straightforward, along minor roads, farm tracks, riverbank, and sheep filled fields, without any tricky navigation. And we had time to drop in on the aircraft museum on the way home. A shelter on the village green in Newtown gave us somewhere to sit for lunch. The temperature was 3° but with the wind it felt much colder. Flurries of snowflakes fell like blossom, and snowdrops filled the hedgerows but Winter was giving way to Spring. giving us the first  celandines, daffodils, and a newborn lamb. 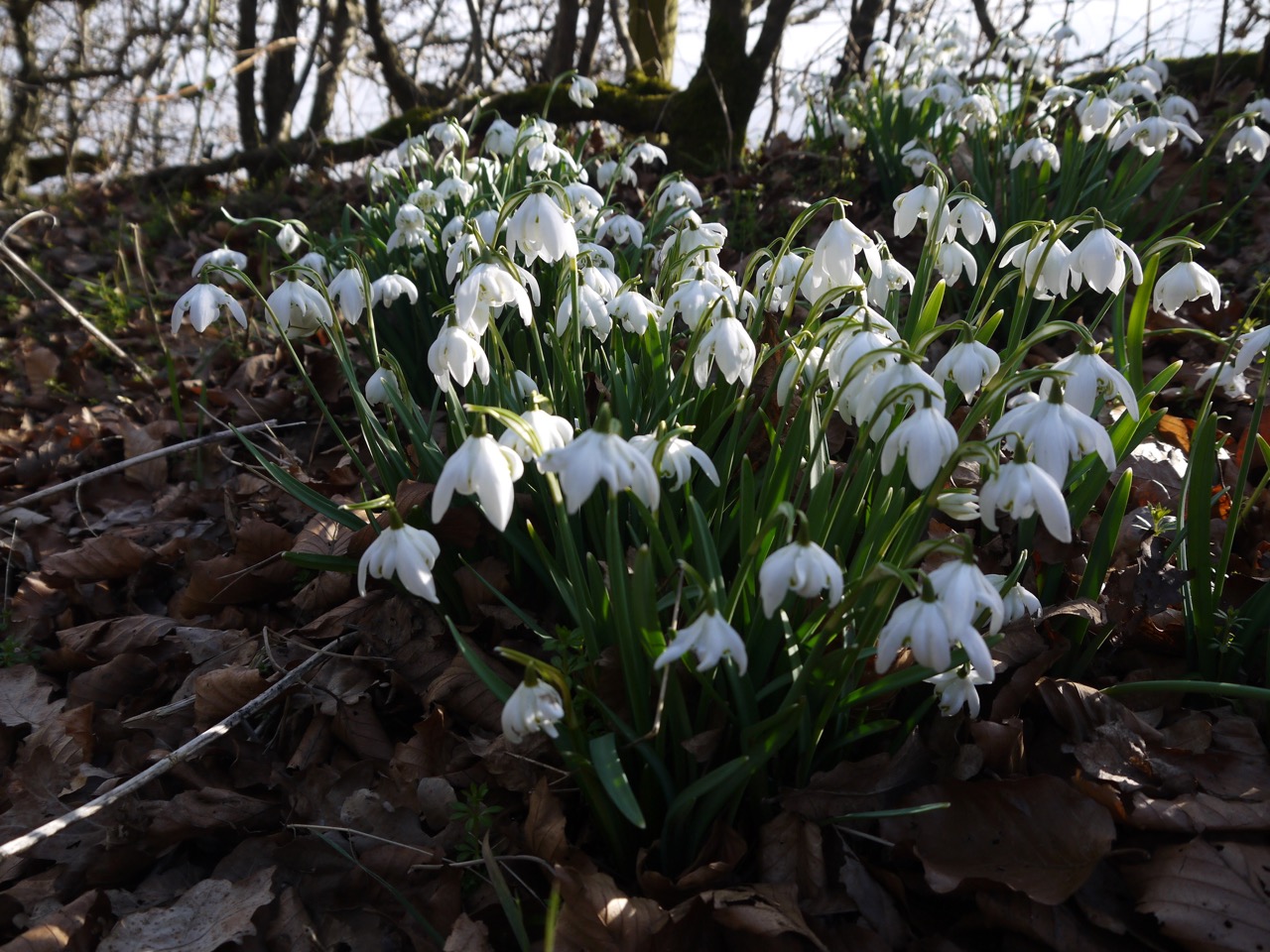 We began at Rickerby Park, in sight of the modern stone circle, and set off along the minor road beside Eden School and then through Linstock.

An octagonal three storey tower stood bed the road. A folly built by George Head Head, a local banker, whose house is now Eden school. It dates from 1835, so it is a Georgian rather than a Victorian folly. There is some suggestion that it may have originally been a dovecote, but it was built at time when tower follies were all the rage. On the other side of the road is a wooden sculpture of a bird which presumably won’t last nearly as long. 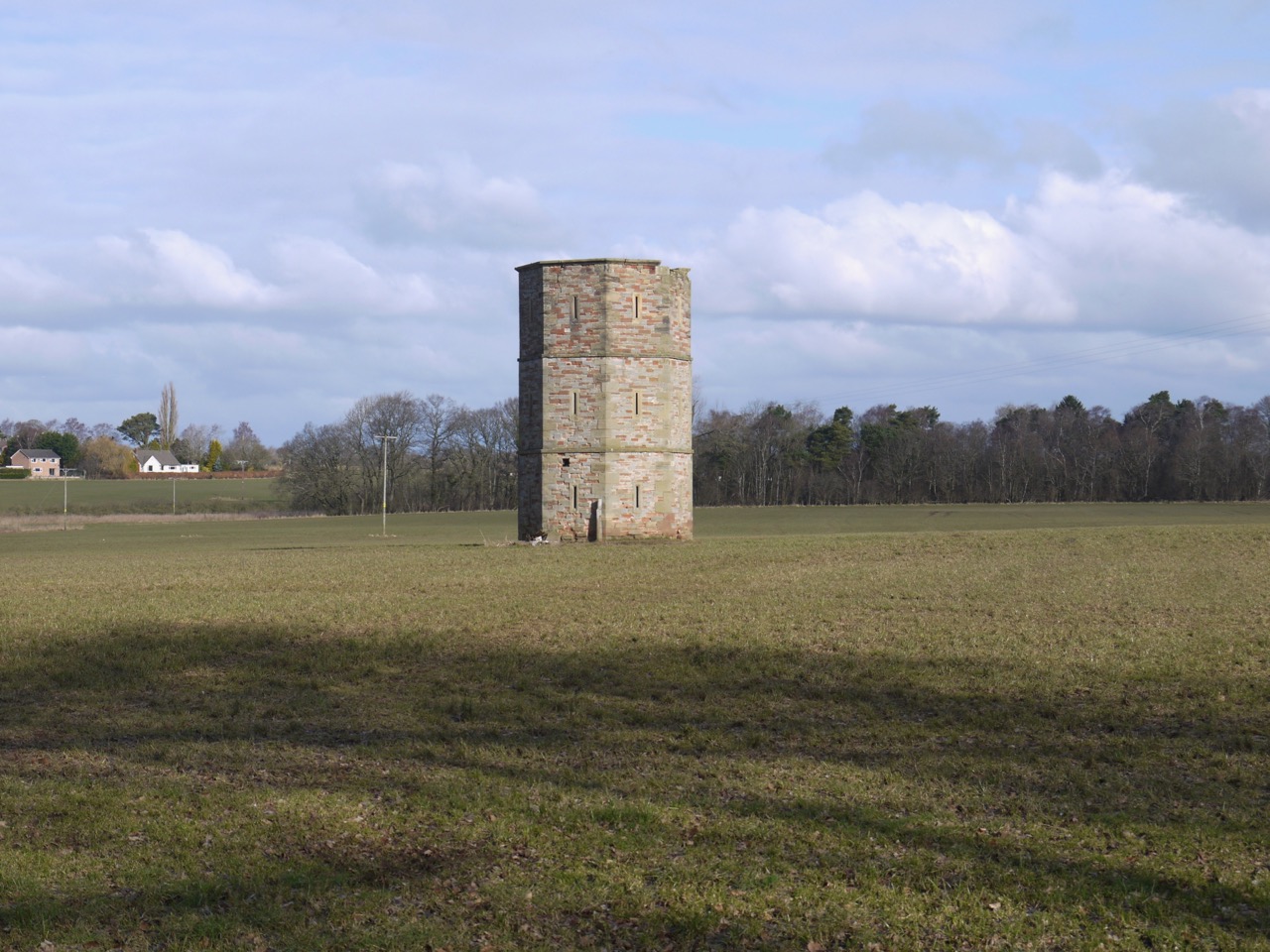 In Linstock we passed a house with a very Cumbrian name, Tethera Oaks, (meaning three oaks) and we stood looking at the three trees beside it wondering if they were actually oaks. We weren’t convinced but didn’t feel like trespassing for a closer look.

Just before leaving Linstock my eye was caught by a flash of yellow at eye level, which turned out to be early flowers on broom. Looking at these I mused that the lesser celandine should be out soon, and looking down there it was, the first celandine I had seen this year. 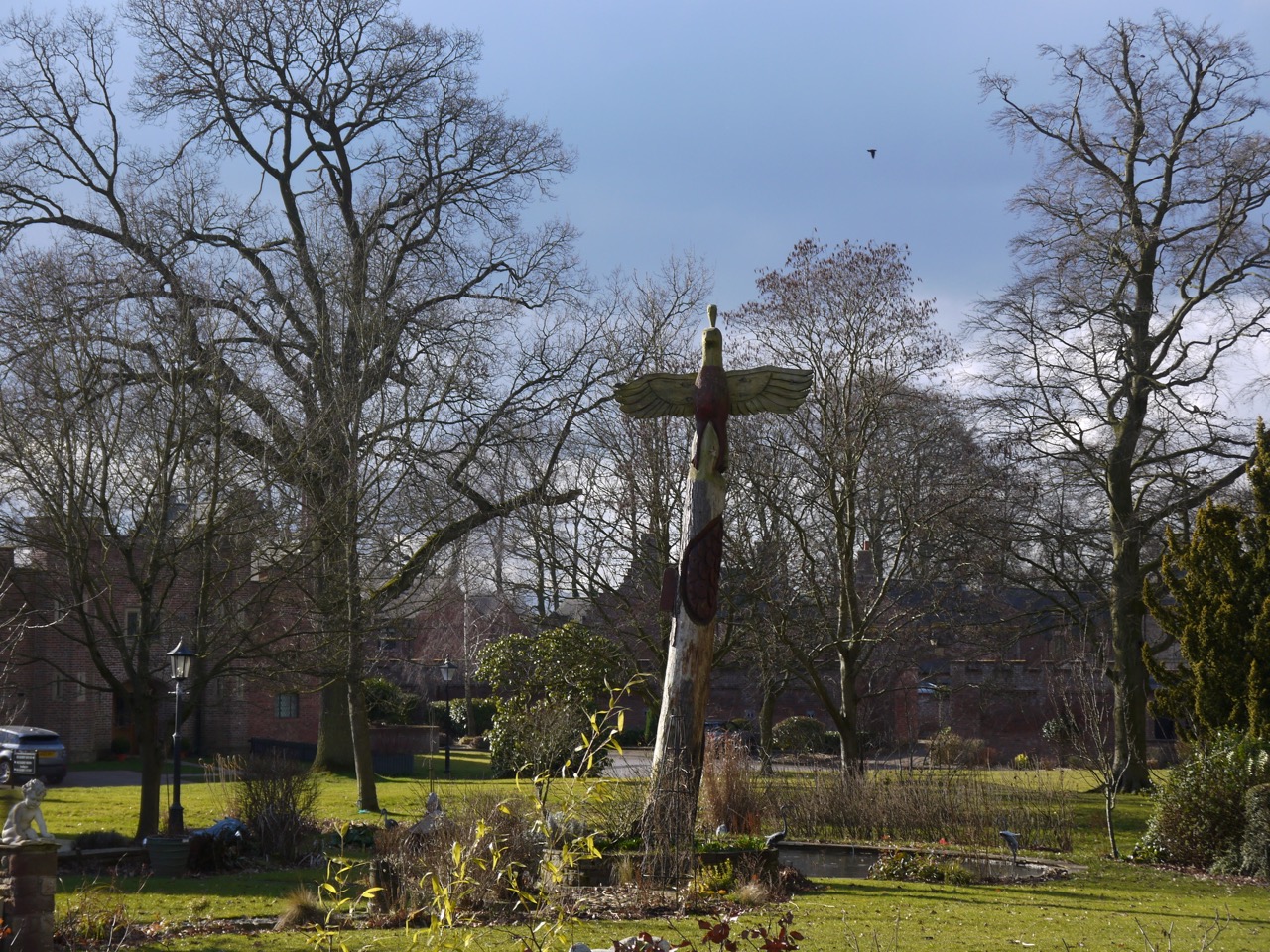 Then we reached M6, the modern version of a mighty river dividing the the land (but we were able to cross it by bridge). The section we were crossing was opened in 1970. The M6 runs from Rugby to Gretna, though in reality it continues as the M74 all the way to Glasgow. This route was completed when the road joining the M6 and M74 was upgraded to motorway in 2008 on the 50th anniversary of the opening of very first section of the M6. The plan had been to rename the M74 as M6 once they were joined, but it doesn’t look as though that will happen now.

At Linstock we left the road for a much more minor road and then a track towards Park Broom. A sign near here informed us that the trail from Park Broom to Low Crosby was closed and offered a diversion along the A689. We had been forewarned by pre-walk research and had decided to stick with the original route if we could. So we walked down to the River Eden and along its bank. Much preferable to walking along an A road. My worry was that the footbridge near Eden Grove might be no more and sure enough, it was ‘closed’ following the floods of December 2016. 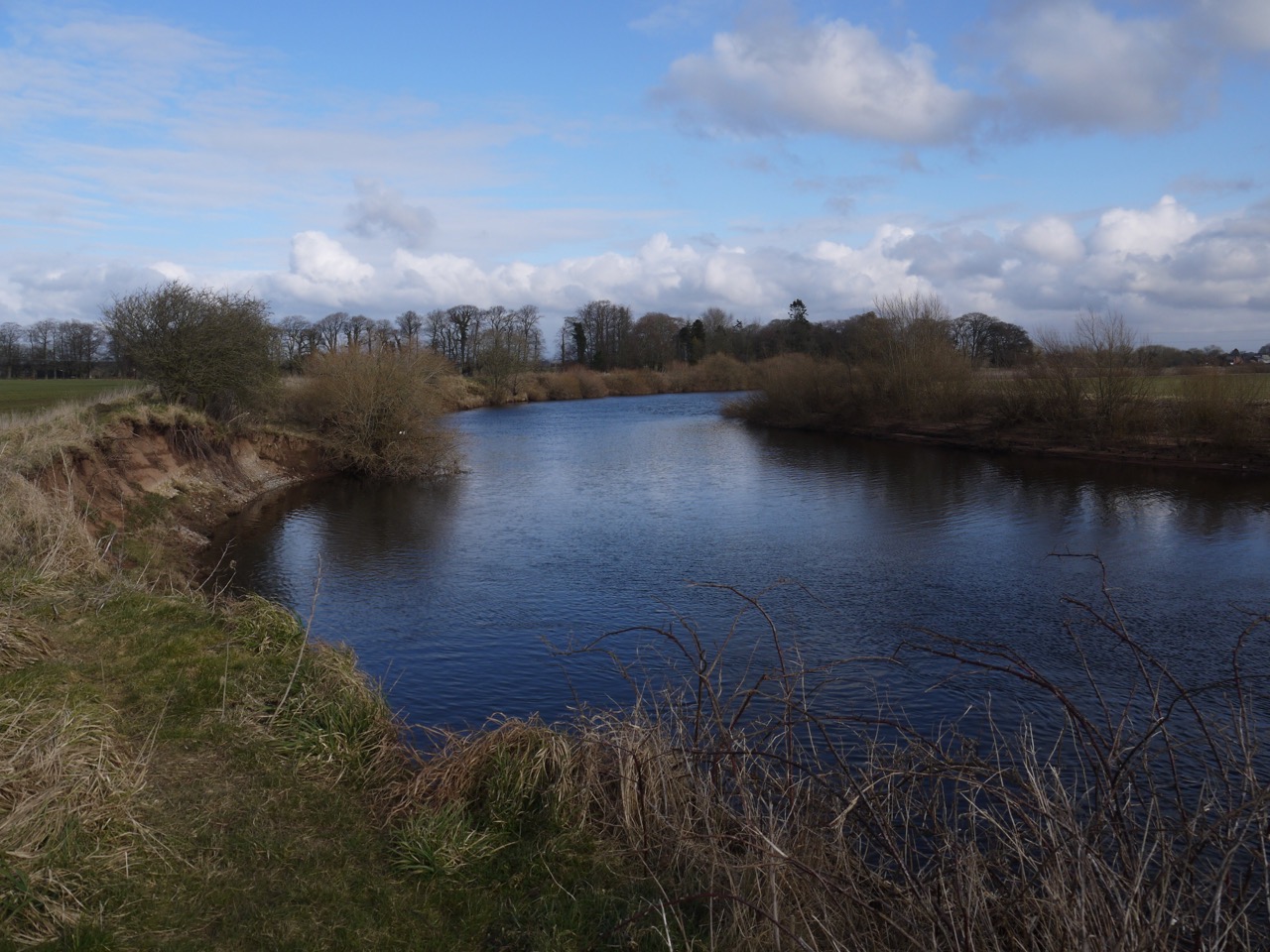 At Eden Grove we stopped to admire some snowdrops and crocuses and found the year’s first daffodils. We walked on towards the ‘footbridge’ and as we crossed a wee beck I commented that I would have called it a vehicle bridge rather than a footbridge. Then we saw the actual footbridge 10m further down the beck, with a sign saying it was not safe.

So the trail had been diverted because the footbridge was unsafe despite there being an alternative bridge within an actual stone’s throw. The flood was over two years ago. F**king ridiculous. There has been plenty of time to fix the footbridge, and no need for a diversion while waiting. 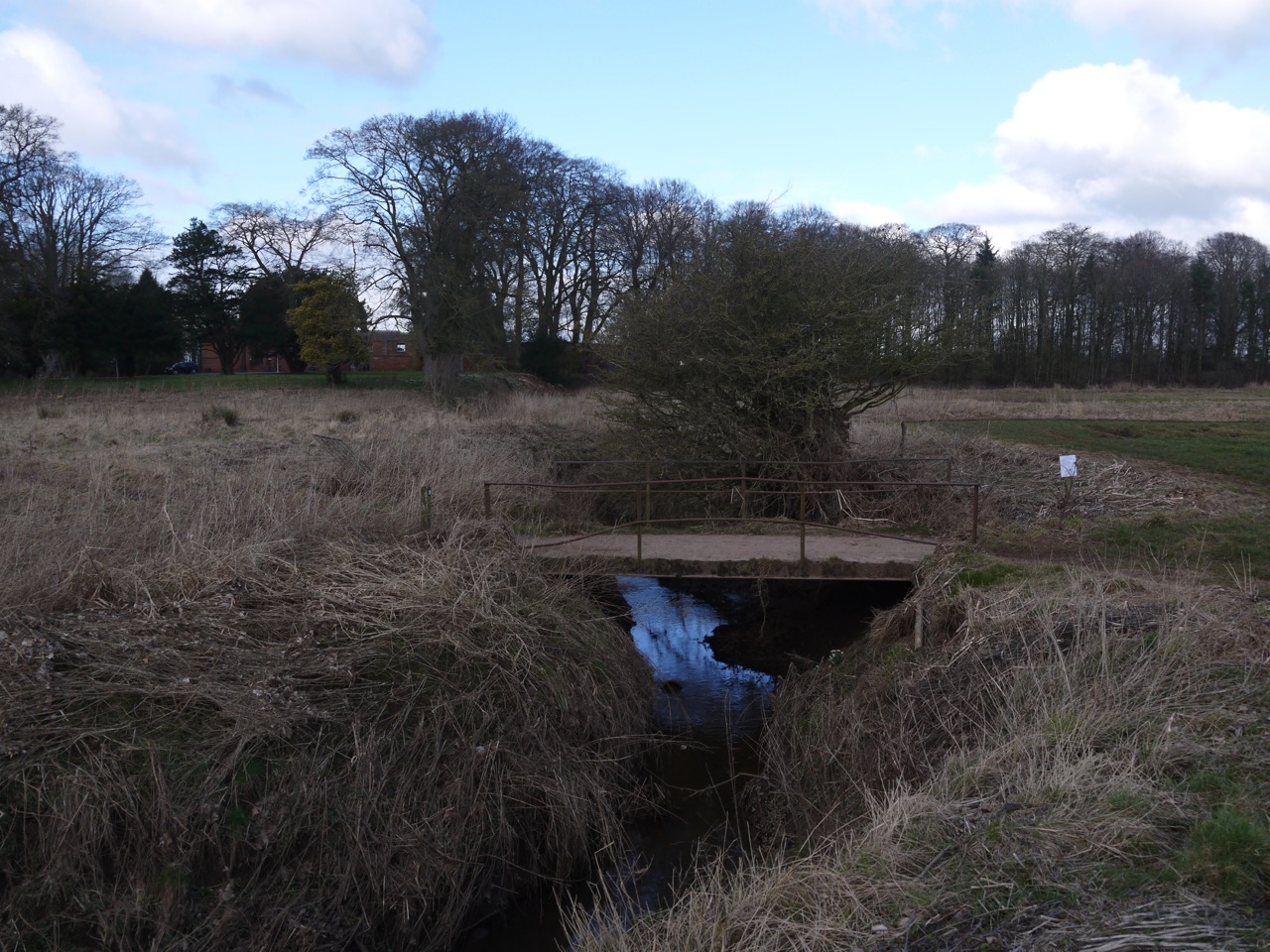 The closed footbridge (vehicle bridge immediately behind it)

There were still signs of the flooding of 2016 with tree trunks high on the banks and witch’s knickers (plastic bags) in the trees. In one of these tree trunks we found a 16GB memory card embedded in its bark. (PS I took it home, and put a photo of a group of folk at a wedding on Facebook, and two days later it has been claimed.)

In Low Crosby the churchyard was filled with crocuses and there was a beautiful modern stone amongst the older graves. Beside the church is a gate dedicated to Glyn Vaughan for his efforts in flood protection. 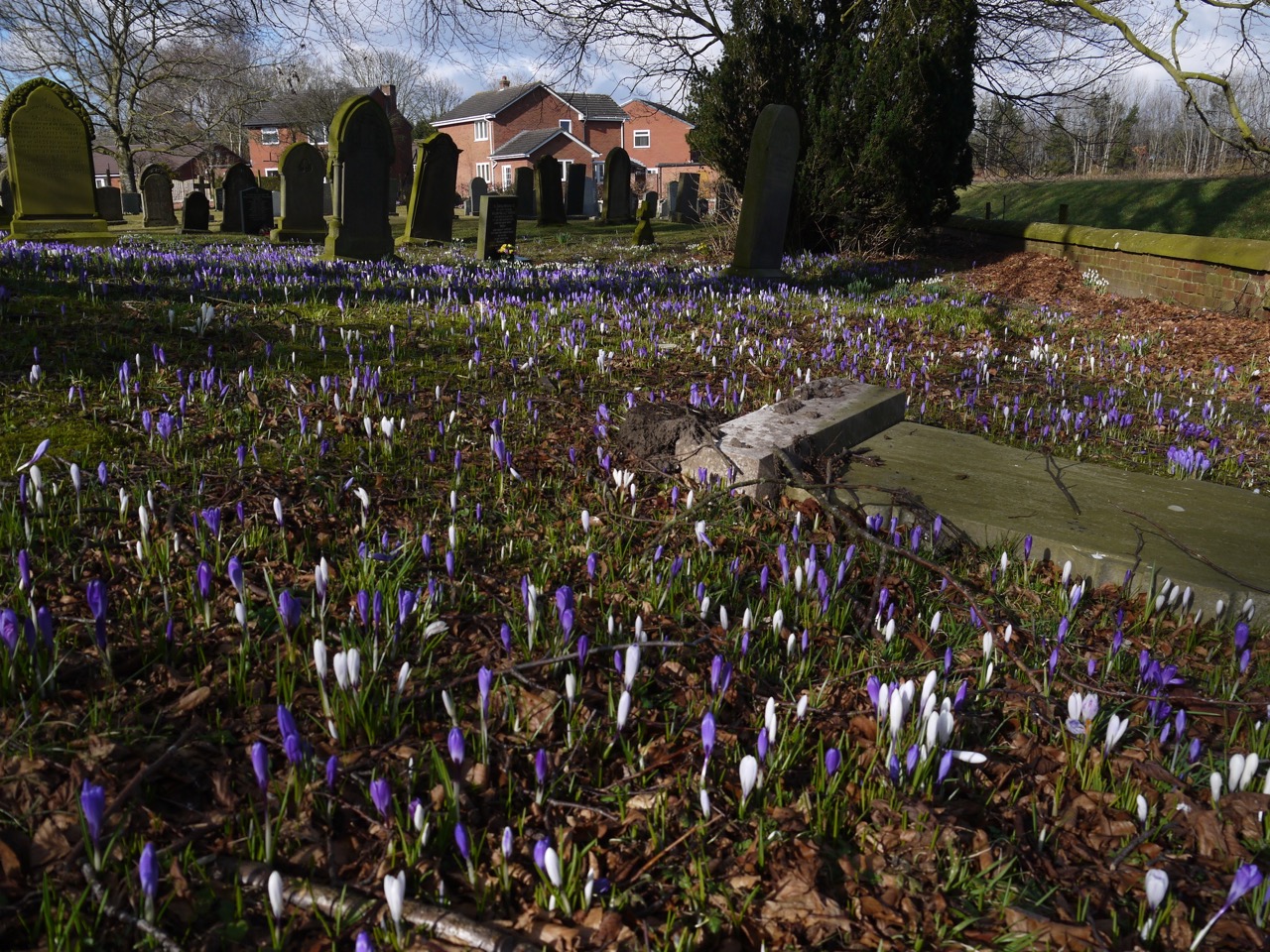 From Low Crosby we walked along a road following the route of the Stanegate, a Roman stone built road several decades older than Hadrian’s Wall, that once joined Corstopitum (Corbridge) with Luguvalium (Carlise). But we only followed its course for a little over half a mile. We left the Stanegate to cross the A689 on a bridge that looked to be designed for livestock. A track beyond here is marked on the OS map as Sandy Lane (track). Presumably it is named after a person called Sandy, because there certainly wasn’t sand underfoot, in fact it was pretty muddy. 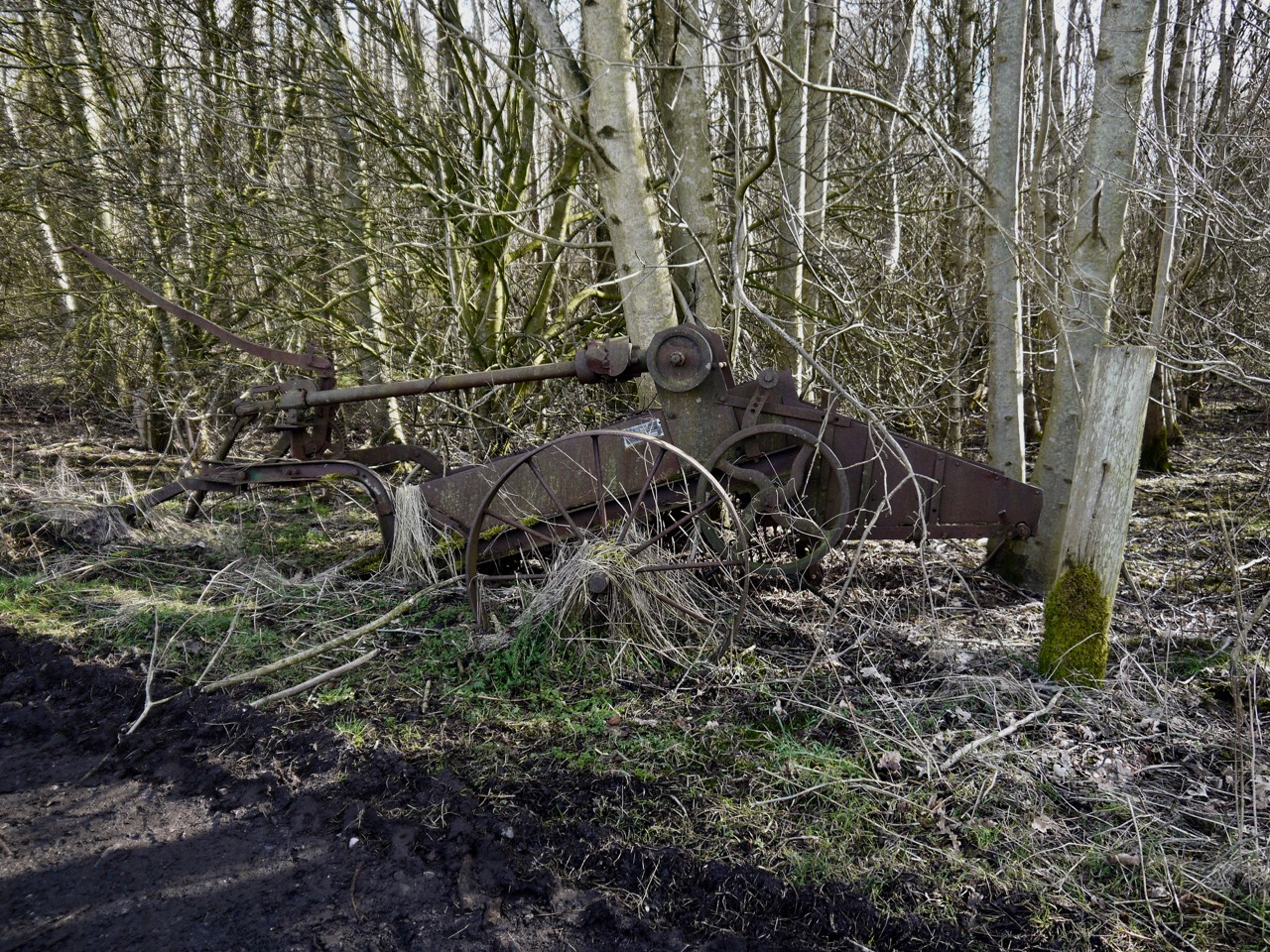 From Sandy Lane we turned right on to a a track marked on the OS as “Roman Military Way” and then followed the course of Hadrian’s Wall through fields past Beatarn and Oldwall to Newtown.

There was no sign of the ancient wall itself but there was a definite raised section of land leading towards Bleatarn. The tarn itself is really more of a water-filled hollow surrounded by many small mounds. If the whole area had been like this one would have thought they were glacial but a nearby information board explained that the tarn itself had been a quarry to get stone to build the wall and the mounds we could see were rubbish heaps from the quarrying. 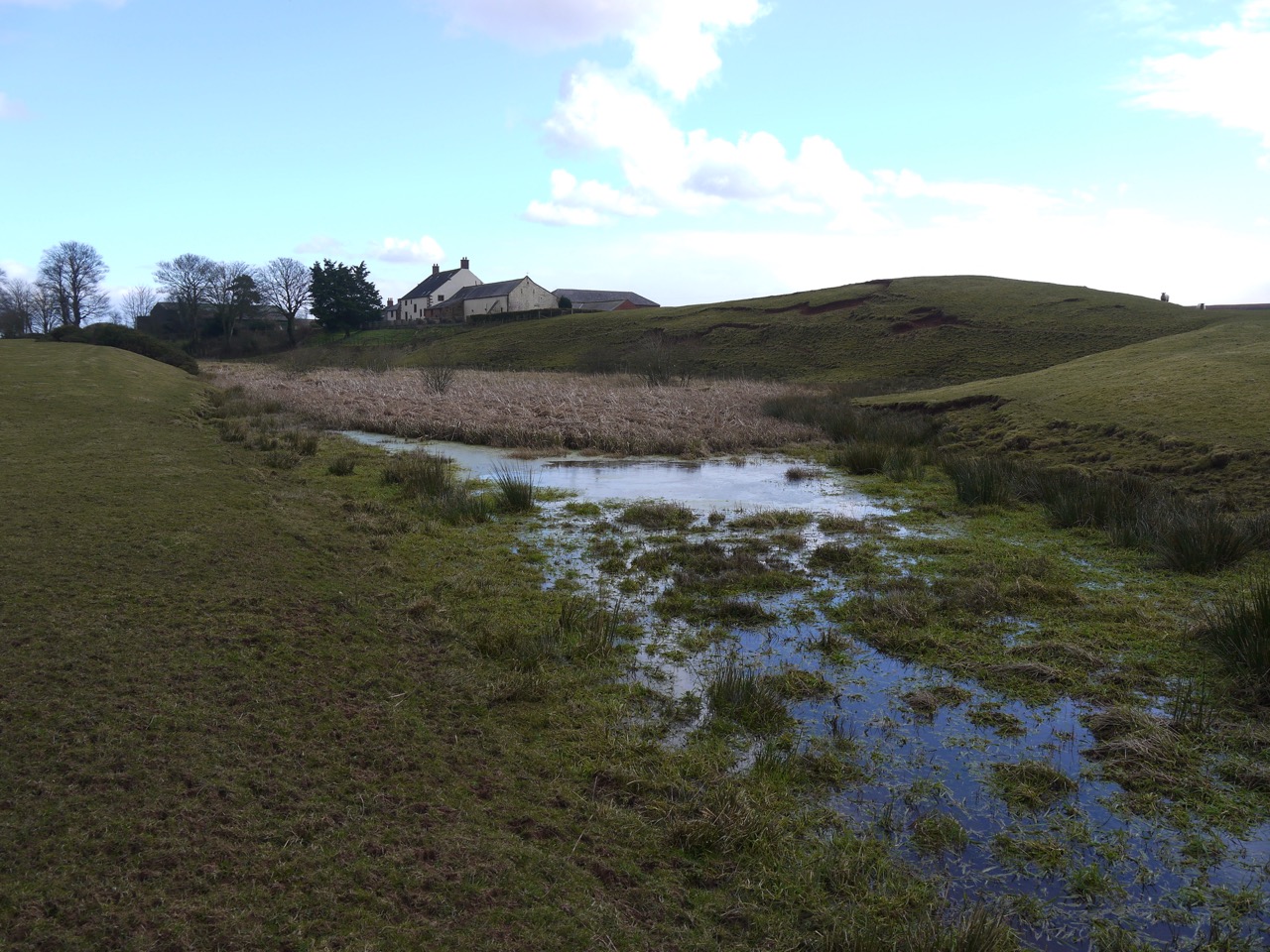 From Bleatarn to Oldwall we walked along a slightly raised area with excellent views to the north with the recognisable shapes of Burnswark and Criffel on the horizon. The fields here had many sheep and we passed one ewe nuzzling a new born lamb. 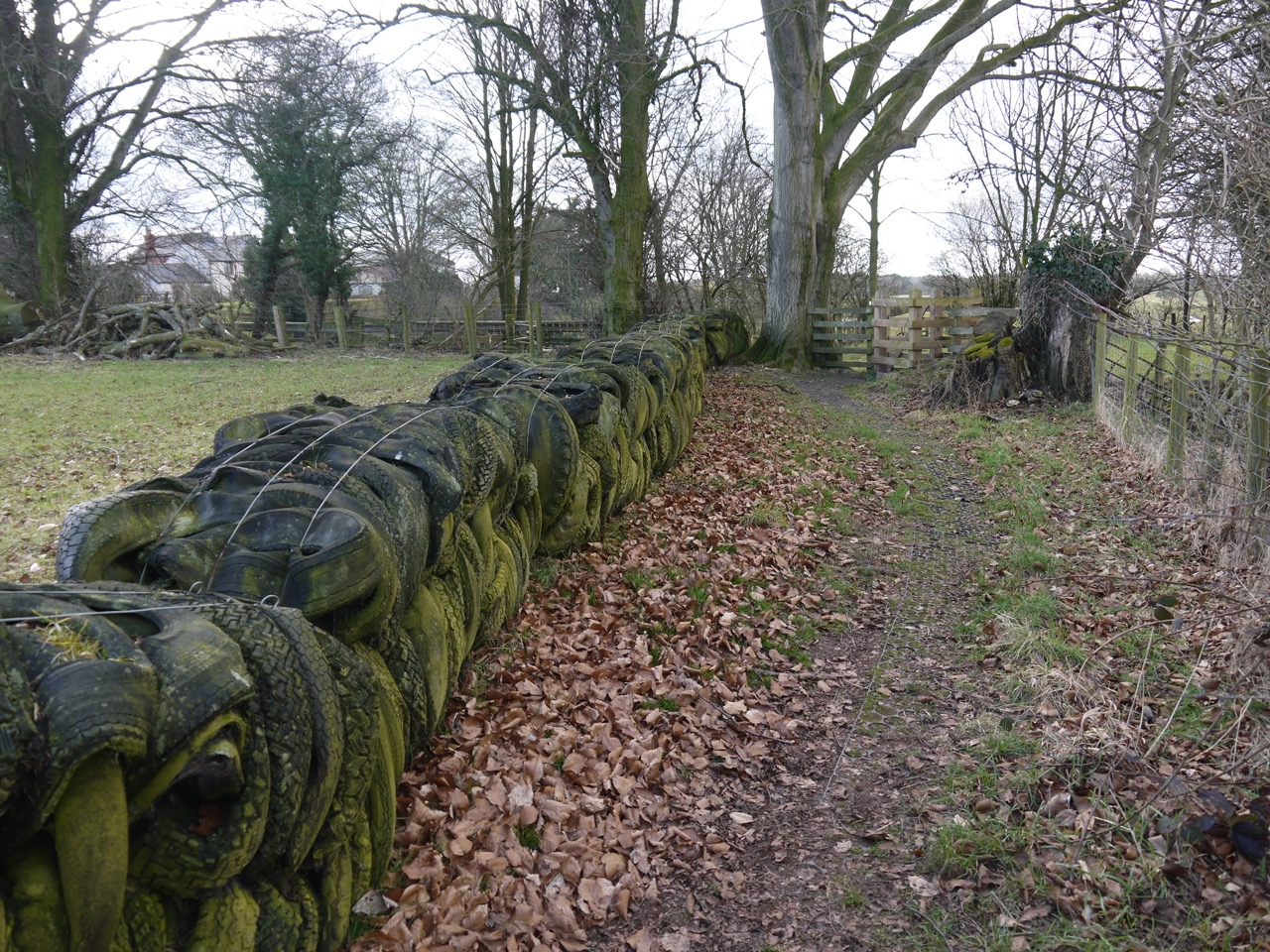 We gave the ewe a wide berth (the photo is with telephoto). I felt a little sorry for the lamb, it was bitterly cold in the wind. Our route here was beside a ditch lined with hawthorns that I am sure will look impressive once their blossom appears. 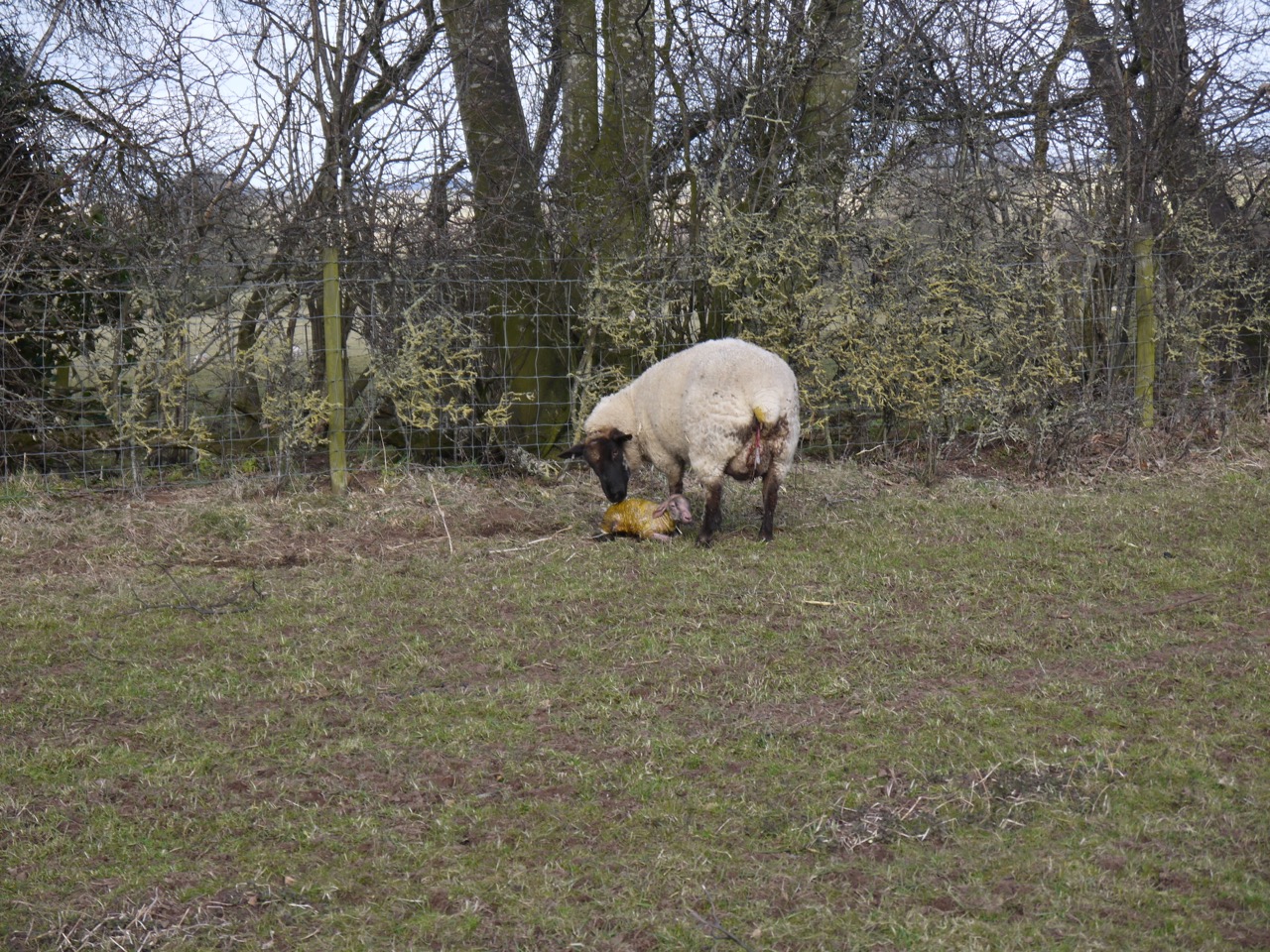 As we walked towards Newtown the northern hills of the pennines (Cold Fell) grew noticeably closer. we had been looking for a likely spot to have lunch for quite a while but could not find shelter from the cold wind with somewhere to sit until we reached Newtown. 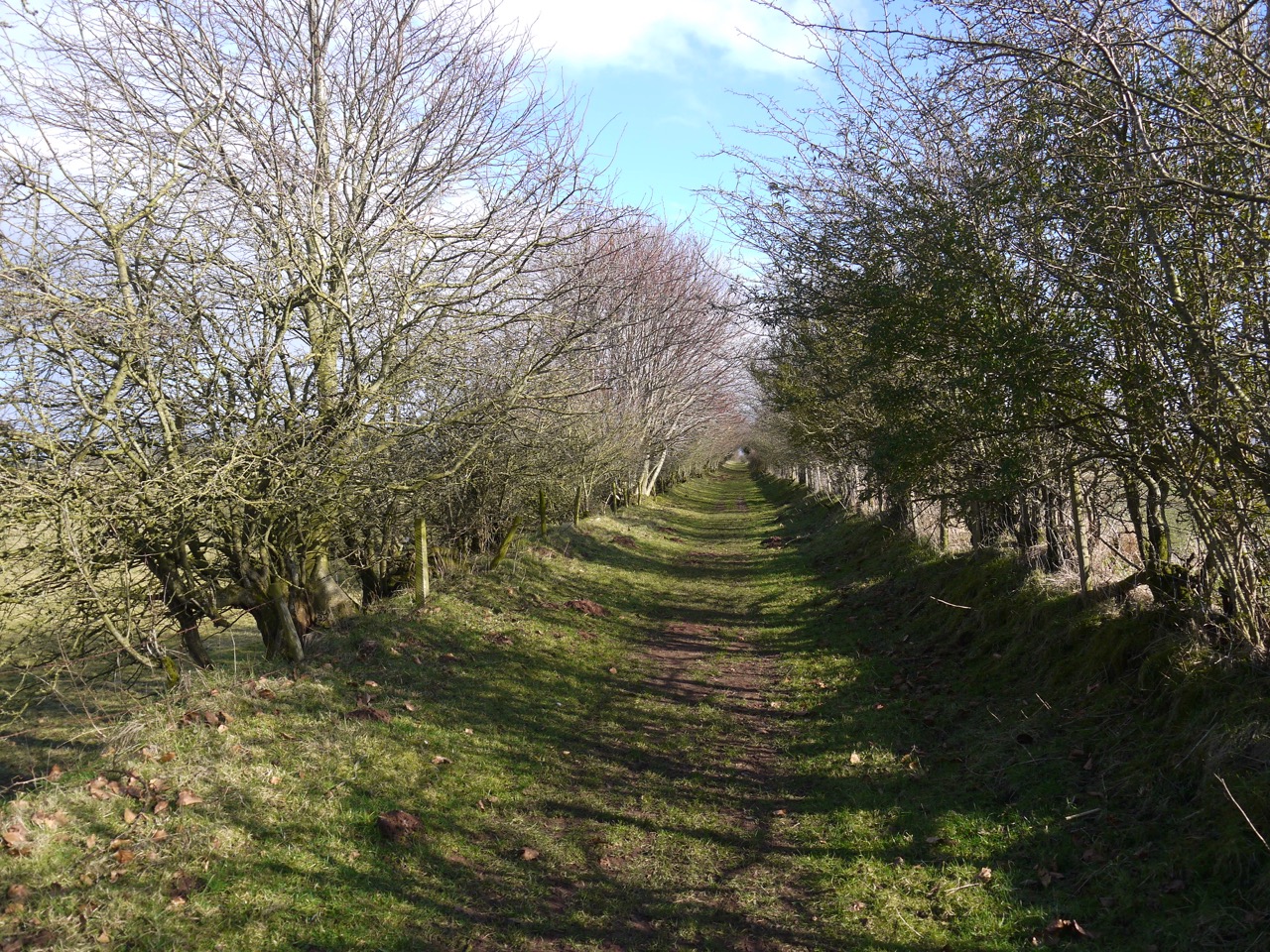 The HW path near Oldwall

From Newtown it was a short walk through farmland to Walton, but the lunchtime stop had chilled us and I was glad to get back to the car and a little warmth.

You will see from the picture at the top that I called in at the aircraft museum at Carlisle airport on the way back to enjoy the machines there. The Vulcan and I are about the same age. 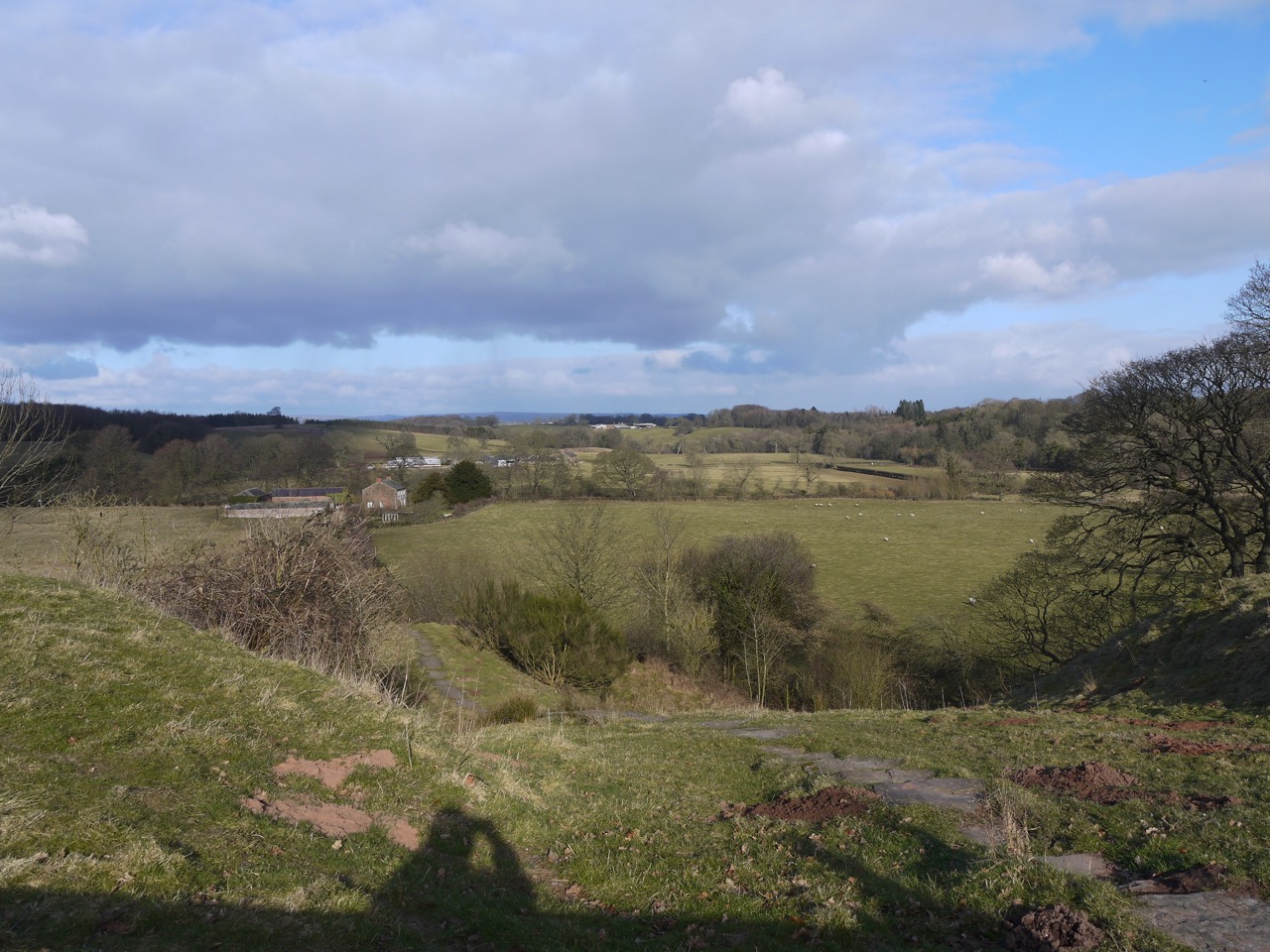 This section has taken us a little further into the countryside but I am looking forward to slightly wilder terrain as we trees onwards.