In search of Galloway’s Chained Art 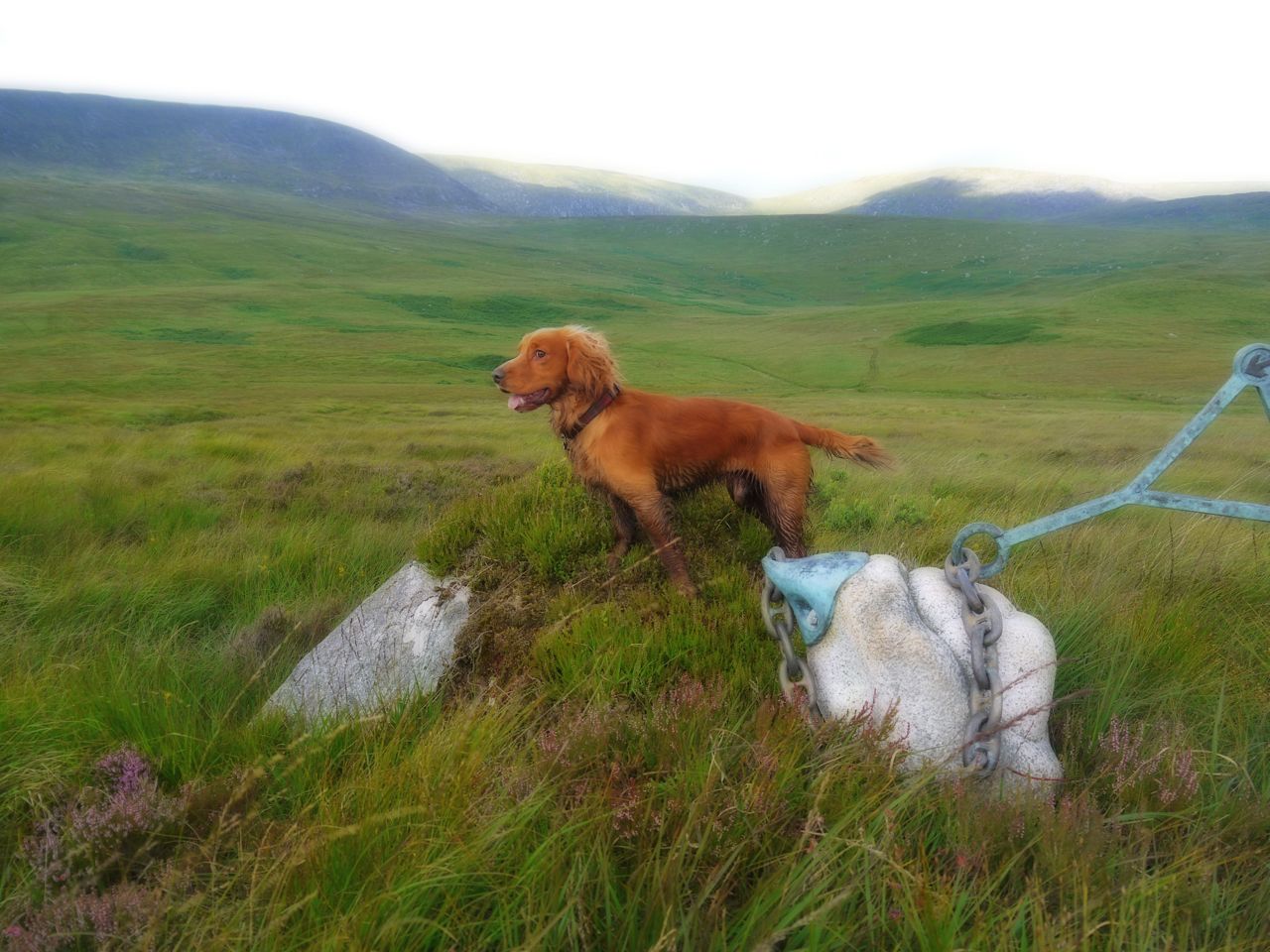 Clints of Dromore-Cairnsmore of Fleet NNR

The Clints of Dromore derive their name from clints, a Scandinavian term for cliffs, and druim mor, meaning great ridge.  They mark the southern edge of the massive granite intrusion which has left us with Cairnsmore of Fleet and its adjoining hills. The underlying granite being relatively impervious to water this is a land where the sound of footfall is either squelch or plop.

There are five artworks dotted around this area with associated poetry, a joint project between artist Matt Baker and poet Mary Smith in 2008, which aims to reflect the processes that form the landscape. The first we came upon was “Heart”, a pair of carved heads chained in the ruins of Little Cullendoch. I have often wondered why this head has the hilt of a knife in its neck and my thoughts had usually strayed towards romance and murder but the artist’s concept is that the relatively light touch that humans have had on this landscape will gradually fade and that this process will be mirrored as these faces become obscured by moss and lichen as they are subsumed into the ground with the ruins about them. 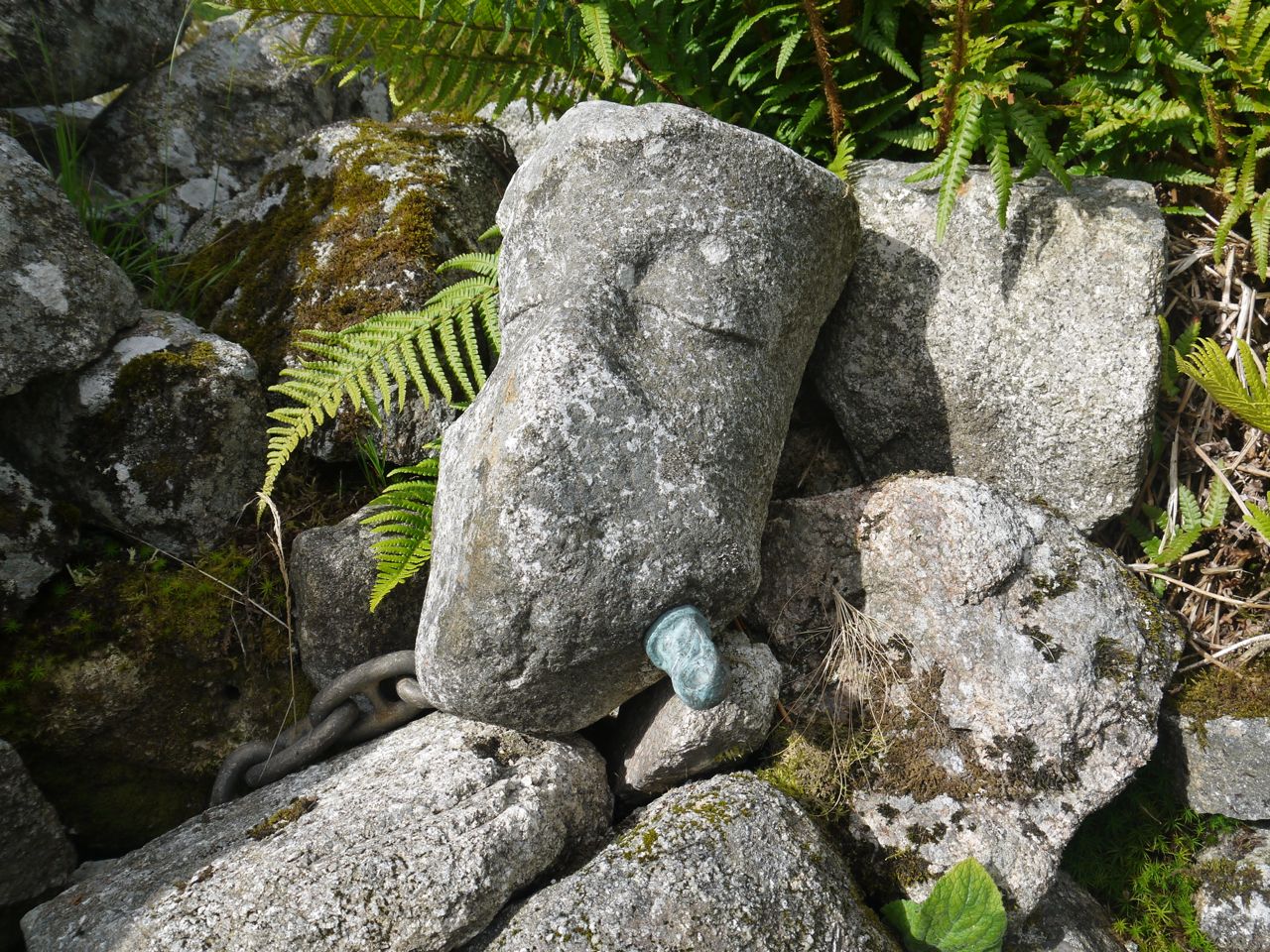 The ruins are close by the forestry track but are defended by a boggy ditch and scattered rocks overgrown by bracken, all the better to twist ankles. The ditch is not an ancient defence but due to the modern forestry track interfering with natural drainage. We had a bit of an adventure getting into the ruins because a nearby scrum of sheep required the dogs to be on their leads. The dogs leaped about making it difficult to choose safe footing. Audrey was dragged off course, Sweep pulling her like an invisible current into the bracken, so she had to manhandle the dog over a wall to get back to the artworks. Poor old Sweep can only jump up walls when it suits him.

Heading away from Little Cullendoch, there was no sign of the holly (cuileann dabhoch) that leant this place its name, but we spotted our first bog asphodel of the day, a single sprig of yellow amongst the green. 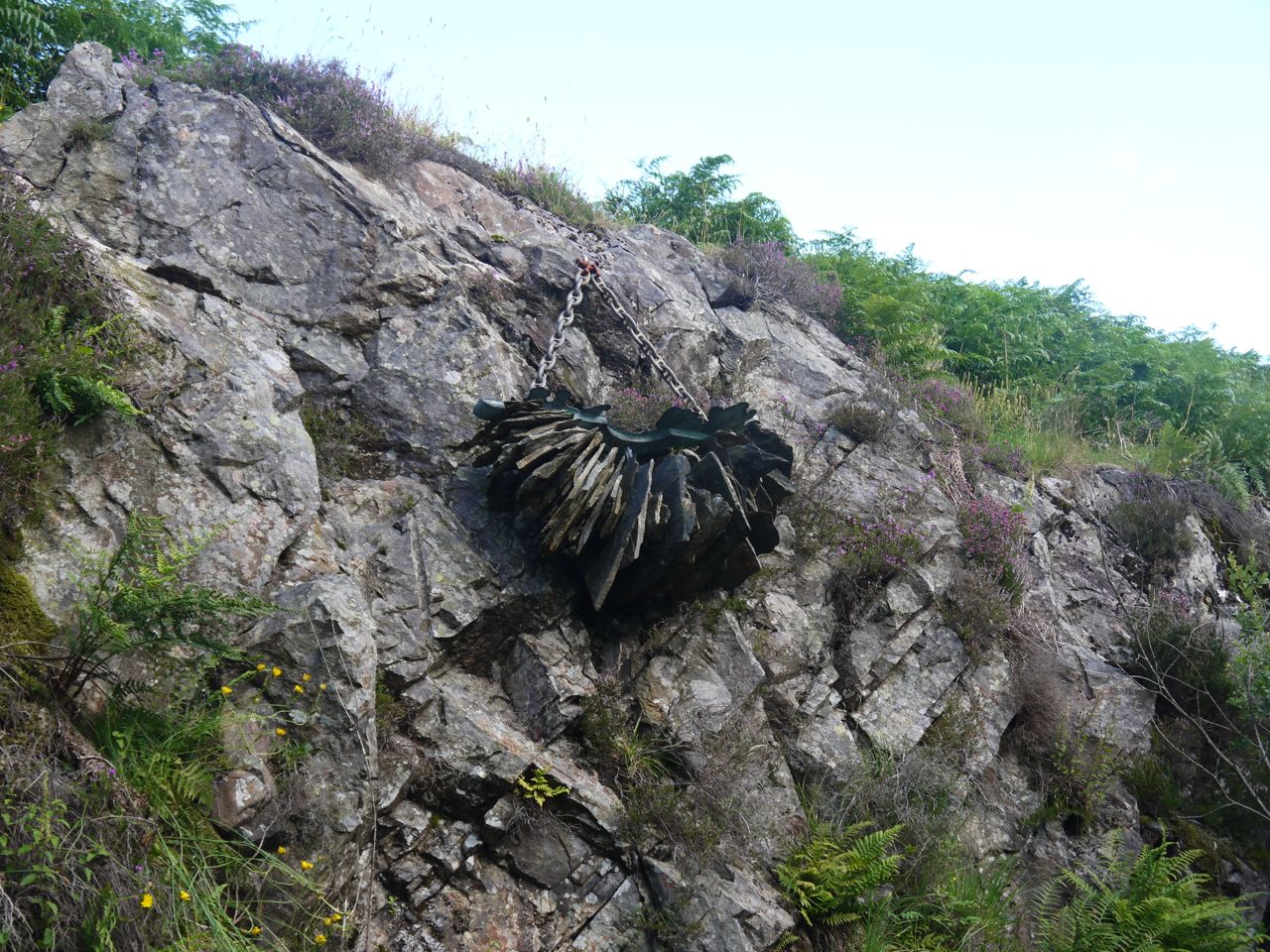 Up on the disused railway line the hedgerows were in flower. Three heathers, ling, bell and cross leaved heath, were flowering together, allowing comparison. There were common spotted orchids, St John’s wort and knapweed, the latter in its rayed form looking a more like a pink cornflower than a thistle.

The next artwork was “ocean”. I noticed it and Audrey missed it for once but she did remind me that I had walked right past a 1.5 metre long wooden newt in the past, and later it was her eagle eyes that picked out the tiny blue flowers of a milkwort. “Ocean” recalls that the greywacke rocks, from which it hangs, began as sediment below the ancient Iapetus ocean.

A little way after Ocean I had a feeling that it was time to leave the old railway and head up onto the clints themselves. I don’t know why I had that feeling at that particular place; it is probably some innate skill, something beyond logic, perhaps a remnant of ancient navigational skills still present but now subconscious. 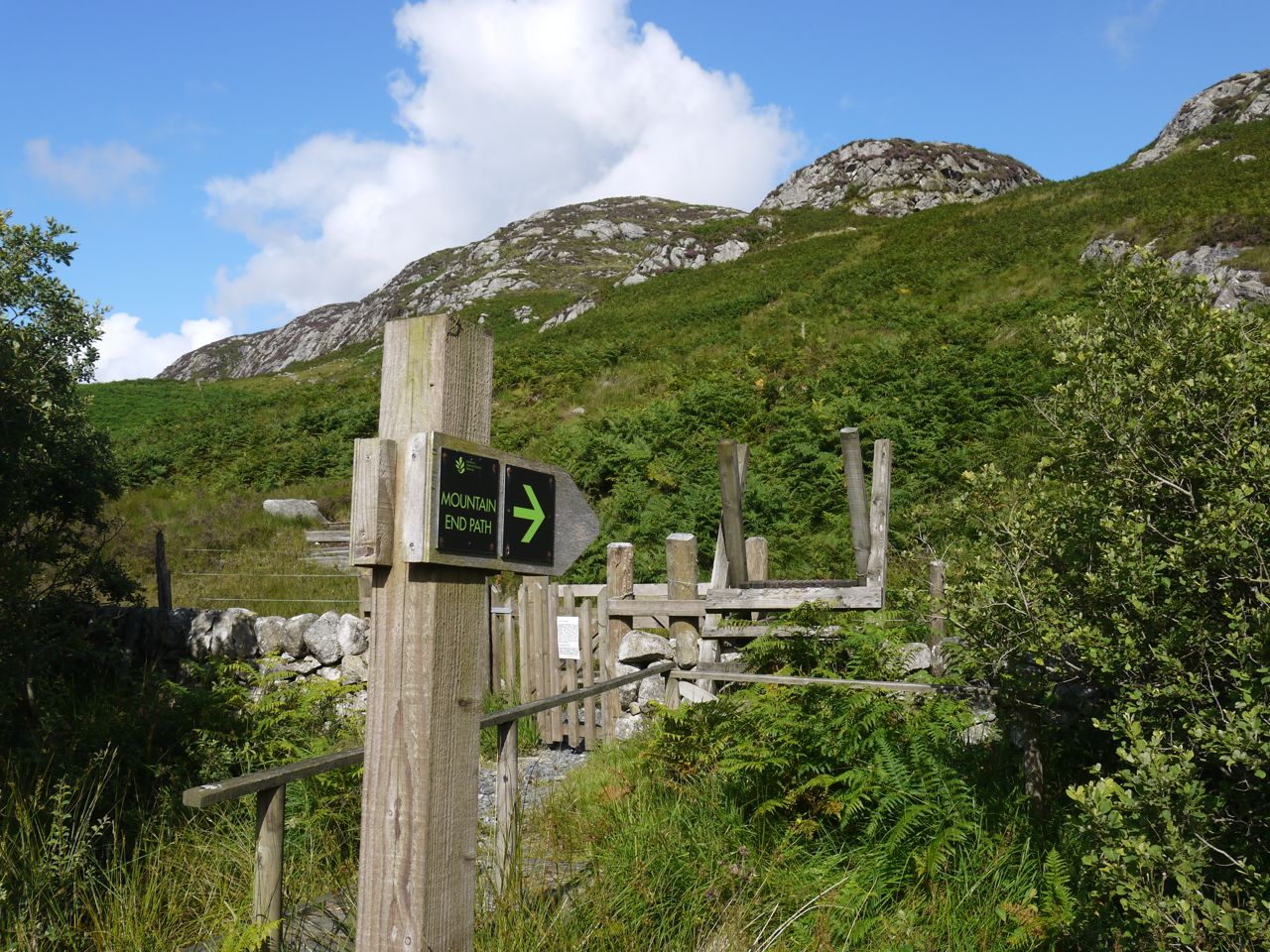 From a distance it had looked as though a path had been cut through the bracken, but it is people climbing that way rather than deliberate clearing that keeps the bracken back I think. This section reminded me of a steep staircase, but with slippery muddy treads and no handrail. The dogs bounded up and down, but I took it in first gear with a couple of stops to enjoy the views over to Pibble Hill.

There are several flatter shoulders on the climb up and one of these has two of the Rosnes Benches. These offer great views over the forest to Pibble Hill and eastwards with the Big Water of Fleet viaduct and the gap in the forest beyond marking where the railway once ran. I’ve walked the old railway route from Loch Stroan to Loch Skerrow, and it would be good to explore the route from here to Loch Skerrow. 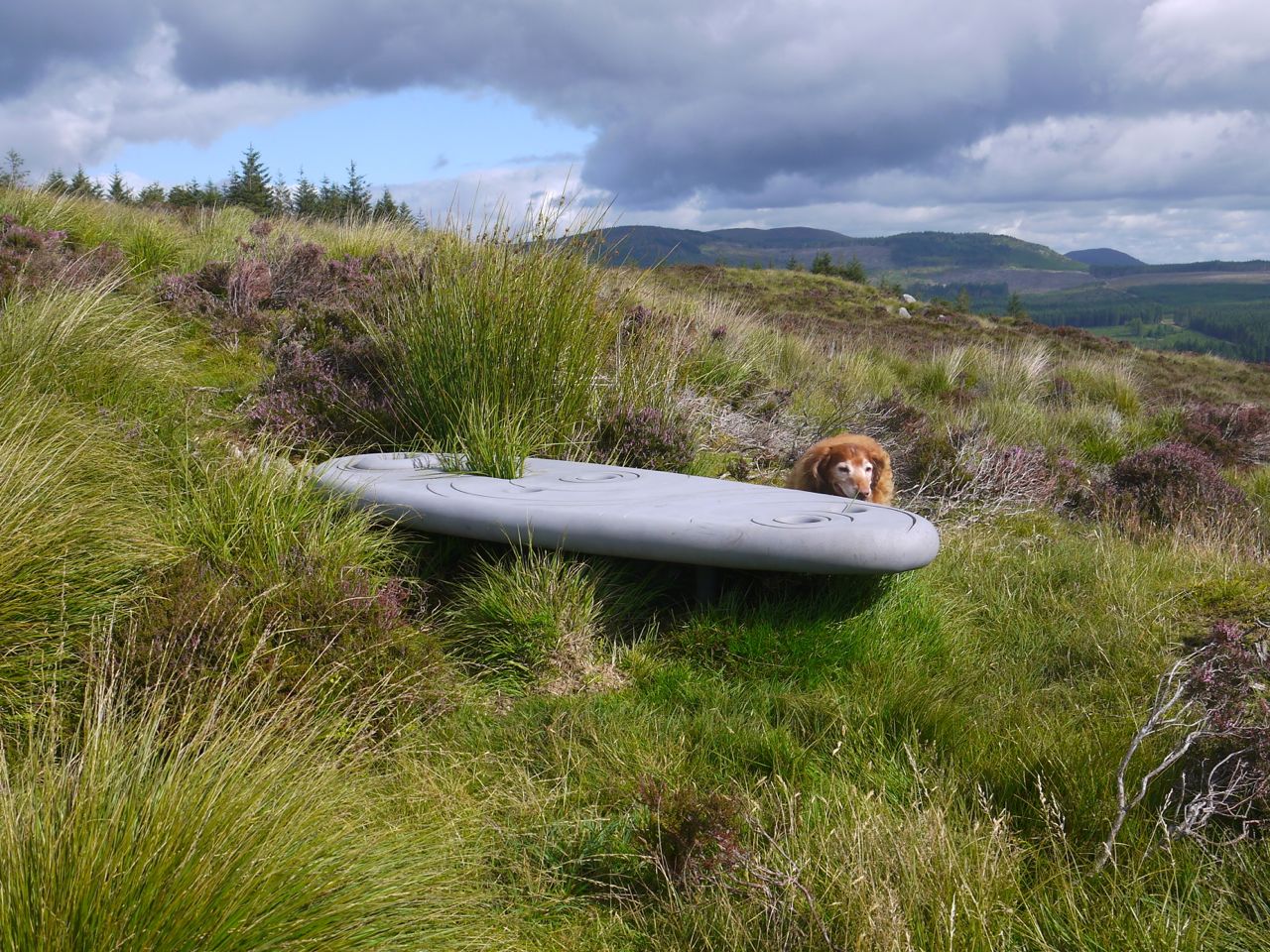 Sweep by the bench

We stopped to experience the surroundings, since that is the purpose of the benches, and had our photos taken for the album.

The walk along the top of the clints is up and down with lower sections wet and other bits muddy where the ground has eroded. There is not however a definite path, walkers and animals will tend to use the same route climbing up but once on the flatter sections will go which ever way suits them. Only where these routes come together has there been enough use to make it muddy.

Our passage was made a little more difficult here by the presence of sheep and feral goats. The animals were no problem themselves but the dogs had to be kept on leads. Eddie has a tendency to rush off after birds and butterflies which sometimes coincided with me taking a careful step. But the one occasion I did slip over I couldn’t blame the dog. 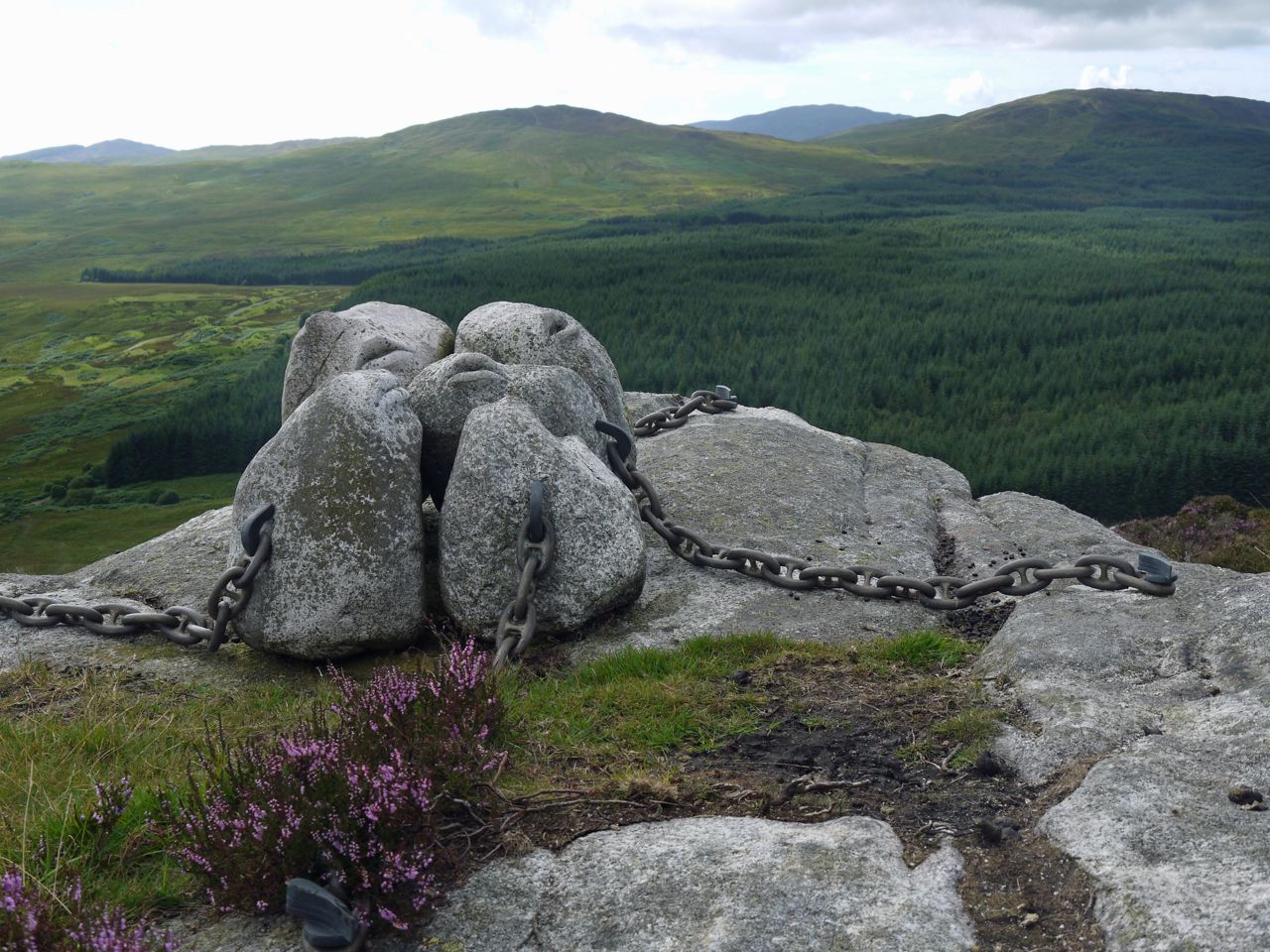 Once on the next ridge we could see the stones of “hush” on one promontory and a goat sunning himself on the next. Hush is made from local granite boulders with sculpted lips, held in place with bronze chains.  I’m not sure what aspect of the landscape they represent. The granite I can understand, but the lips? Perhaps they represent the wind that has sculpted the land. The peat in places is eroding but hasn’t produced the hags one sees elsewhere.

No one was here when lands crashed together,
no one to witness volcanic flames erupt
in fevered dance, nor see in hot lava tears,
this landscape’s beginnings.

When glaciers scoured rock faces,
carved mountains, opened rivers and lochs,
no one felt the icy touch
of their slow slide to the sea.

Except the wind, which still carries stories
of what once was, and how things came to be.

But the why of it lies deep
beneath its whisper,
in a silence with power
to unlock mysteries. 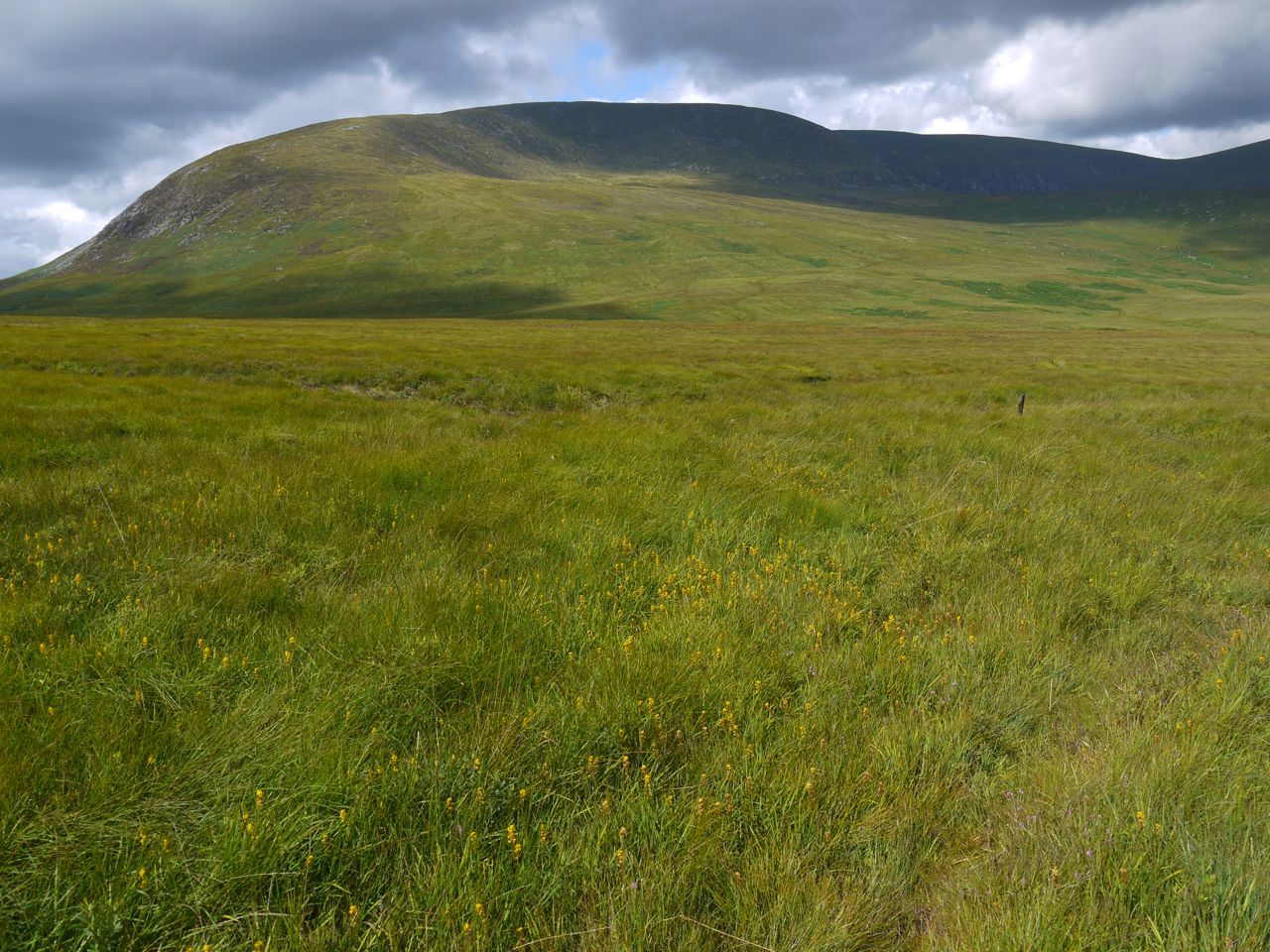 Knee of Cairnsmore, Cardoon Burn in mid-distance, Bog Asphodel in the foreground

The walk across the clints was mainly though heather, cross leaved heath, moss and wet-loving grasses. Once we headed towards the tree line and then the area around the Cardoon Burn the ground became wetter and we found ourselves walking through deep tuft grass. The new growth made it impossible to see the ground and my fall came with a hidden dip in ground.

We had one fence to negotiate. There was a wooden section where it joined the forest’s fence so we could climb over relatively easily and luckily we were able to get the dogs underneath it. Beyond the fence the yellow tormentil we had seen amongst the heather higher up gave way to the more golden yellows of bog asphodel and marked a wetter section. Once round the tip of the trees we joined a boggy quad bike track and soon reached the forestry track that would take us back to Cullendoch.

I knew that one of the artworks was near here, but this one, “erratic” has a handle and chain and can be dragged about, so it might have been pulled anywhere over the years. For some reason I remembered a picnic bench near the Cairnsmore NNR sign and was looking forward to having my lunch in comfort, but it is in fact a stand for fire beaters. (Memory is a tricky thing).

I climbed onto the stand for some extra height and while balancing carefully, swept the area with my binoculars looking for any sign of the artwork, but no joy. We decided to walk a little further to look for it. My hopes were dashed when thing that looked like a rusted fence post sticking out of the peat turned to be a rusted fence post, but just as I was about to turn back I spotted the bluish handle of the artwork in the distance. 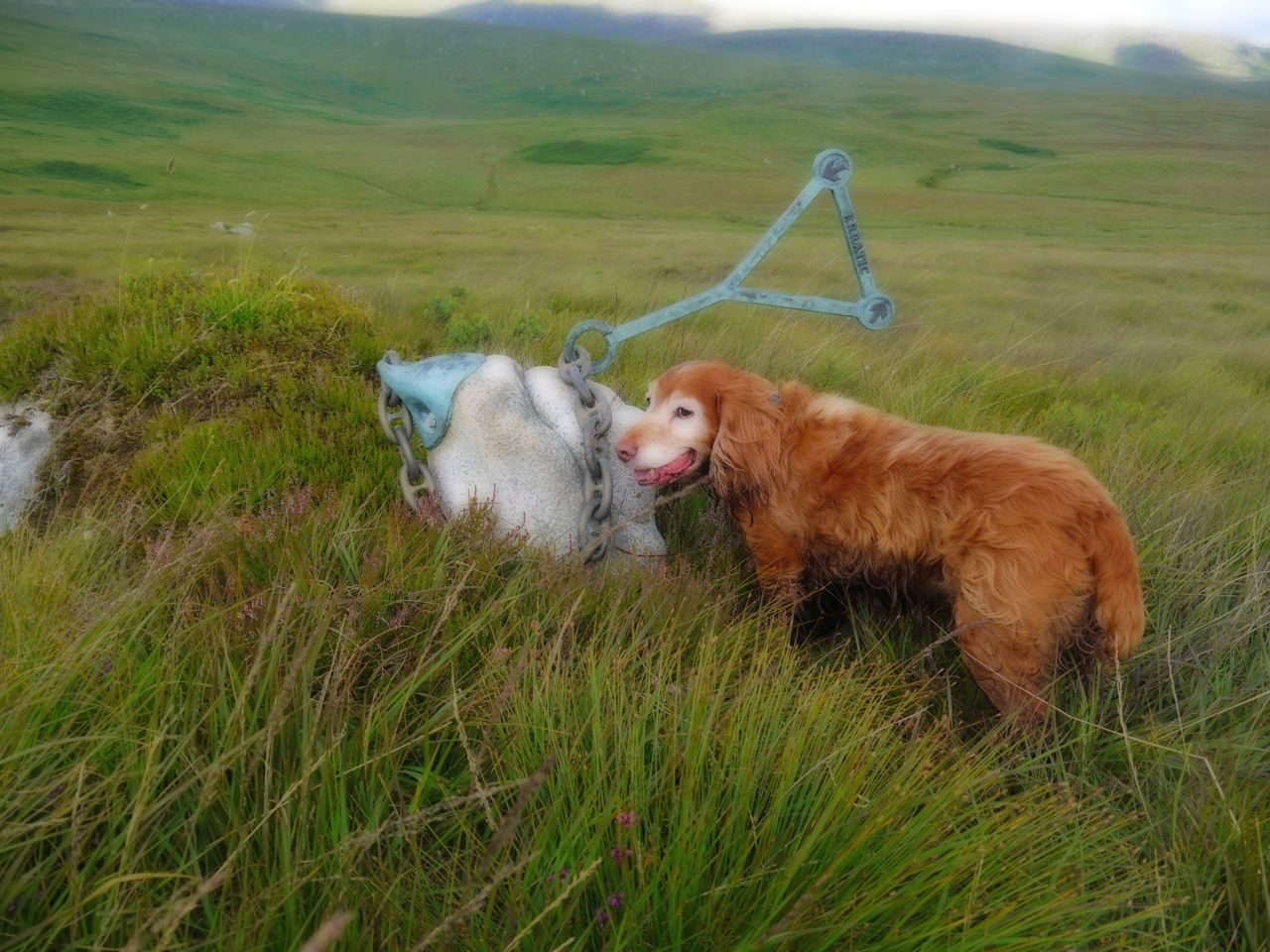 Presumably this artwork represents the true erratics, boulders dropped by glaciers as they melt. The artist apparently invites those who find the piece to remove the pulling handle and help the rock on its way. I did my bit, pulling it a few centimetres, which I thought a geologically appropriate distance given the time I took, and then asked Audrey to put her back into it, and to be careful not to squash the dogs. 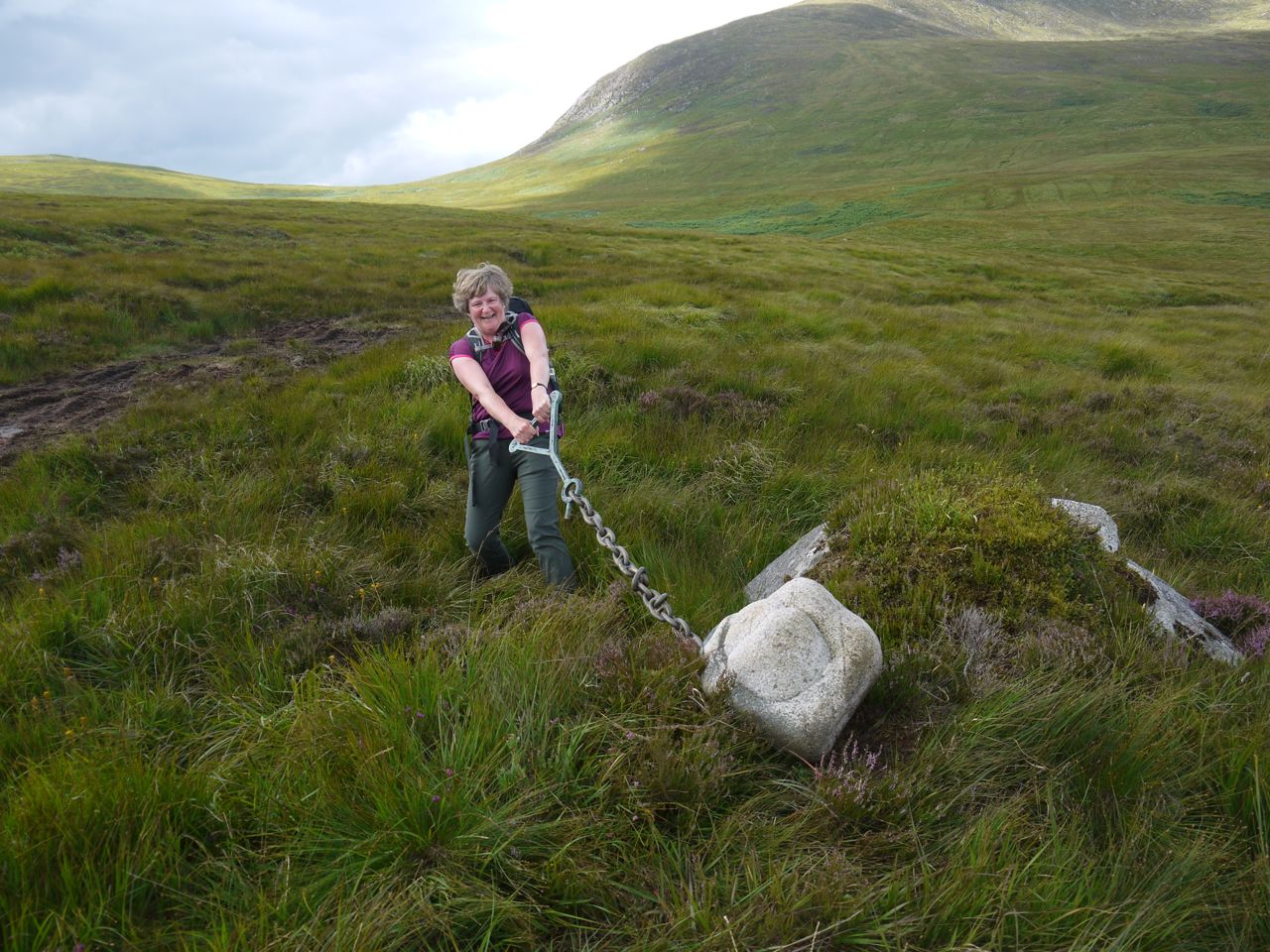 Put some effort in! It’s not that heavy.

There is a complex pen, with curved gates high enough to deter deer, separating the forest from the moor. Eddie managed to get into one of the side sections and then panicked but being thin managed to squeeze himself back through. After wading through the deep grass, heather and moss of the moors, it was a rest for our legs to step onto forestry tracks.

The forest was predominantly forestry conifer plantations though there were some deciduous areas which I presume are older. Some areas had been felled but there were also some areas where many of the trees had fallen. Presumably weaker trees which had been unable to tolerate winds when their sheltering trees were felled.

These areas creaked like doors in horror films as the trees moved. As I mentioned earlier, Audrey spotted some tiny blue flowers which turned out to be common milkwort and we found some more orchids.

Lunch was a health and safety nightmare. I attached the dogs to a metal spike screwed into the ground while we ate our sandwiches but the ground was friable and when they pulled, the spike came loose. So we had two dogs running at us connected by their leads with a 12 inch metal spike in the middle. We survived unscathed though my nettle tea was spilled.

The fifth artwork is “scene shifter” which hangs from a rock in the Big Water of Fleet. Scene Shifter is in the shape of the old viaduct that crosses the river couple of hundred metres upstream. 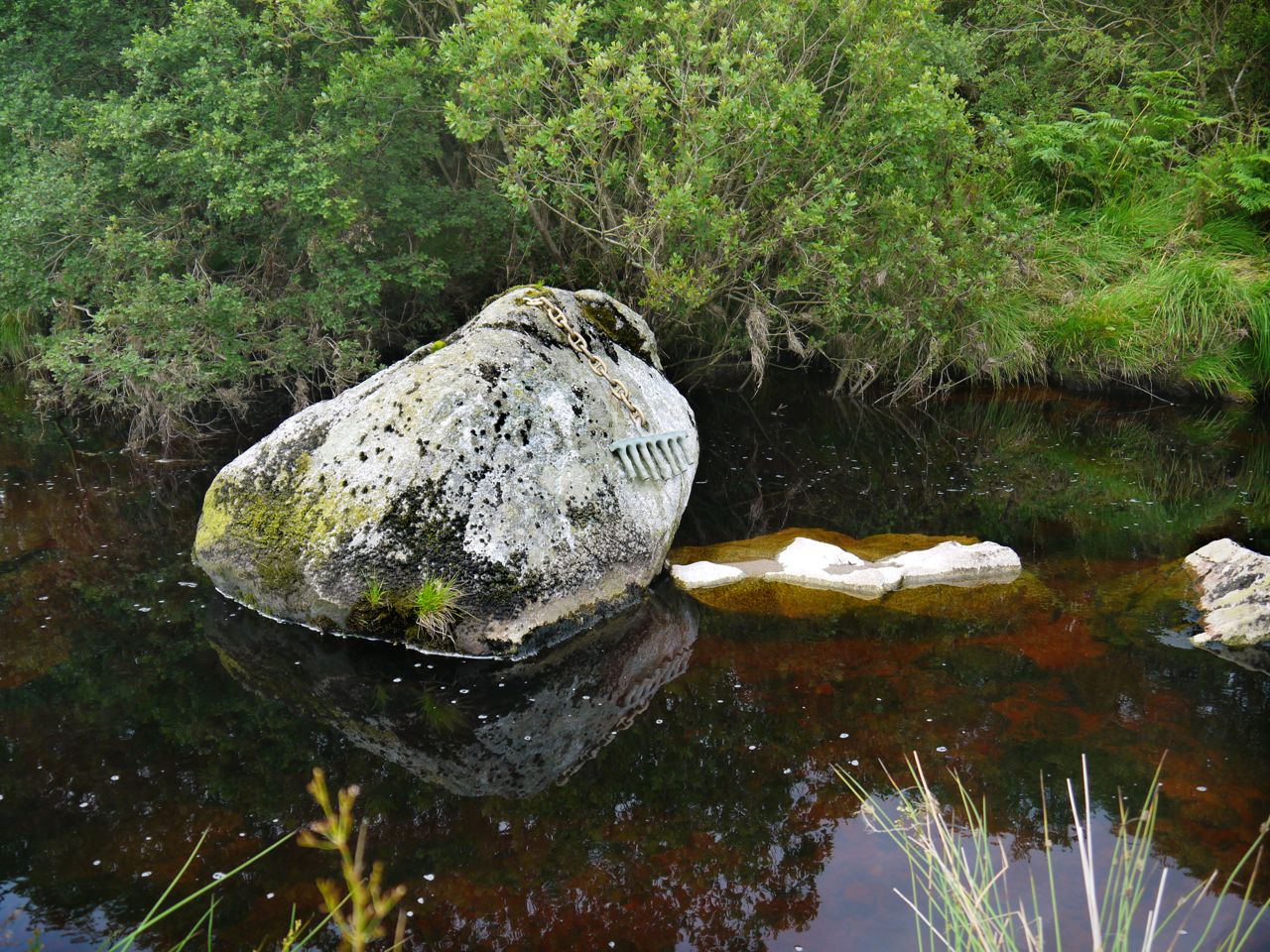 Scene shifter is cast in bronze and the artist’s concept is that the piece will gradually be eroded as it is rubbed against the boulder, echoing the slow decay of the nearby viaduct.

Millions of years in the making
moorland, hill and heather,
mosses and bog.
A continuous chain of actions,
reactions –

Landscape today is not an end result,
but only a single frame
in a long-running, slow motion movie.

How well will we act our parts
in the next scene?

We hadn’t seen any birds of prey all day, but I wonder if that was because our eyes were mainly on the ground looking for the right place to step or admiring the flowers. I have since noticed a raptor of some kind in the sky on one of the photos though.

Share this...
This entry was posted in Dumfries & Galloway and tagged Rosnes Benches. Bookmark the permalink.