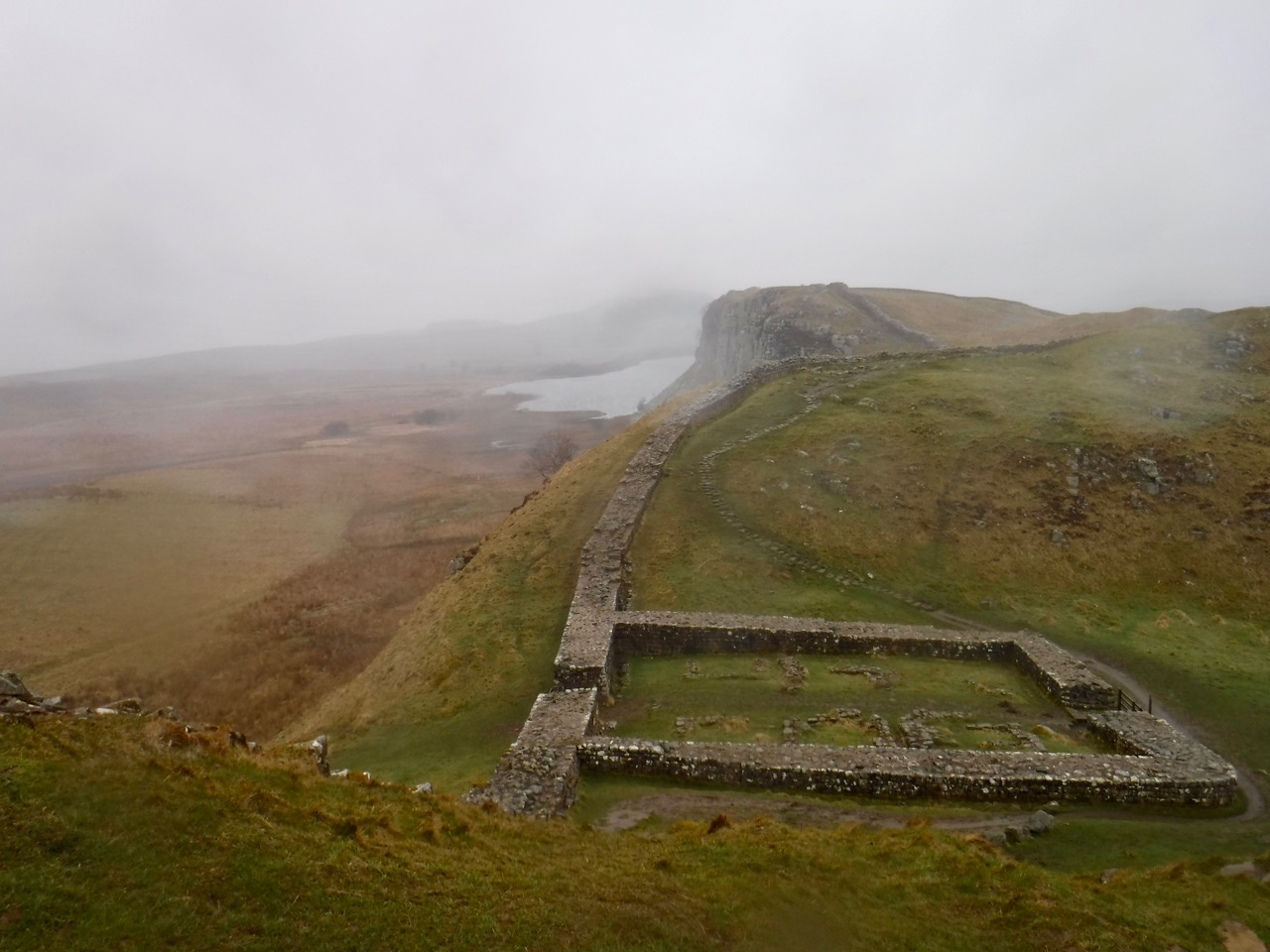 This was a walk in the rain. When we set out the rain was light enough that I decided against waterproof trousers. The forecast suggested it would stop by 1pm. Both the decision and the prediction proved to have been overly optimistic. But walking in the rain and mist has its own delights. It’s just annoying trying to take photographs with rain on the camera lens.

This section started beside some houses that presumably were originally for railway workers, and we crossed the railway itself at an unmanned crossing, then the Pow Charney Burn on a footbridge. From there it was a short walk to Thirlwall Castle. 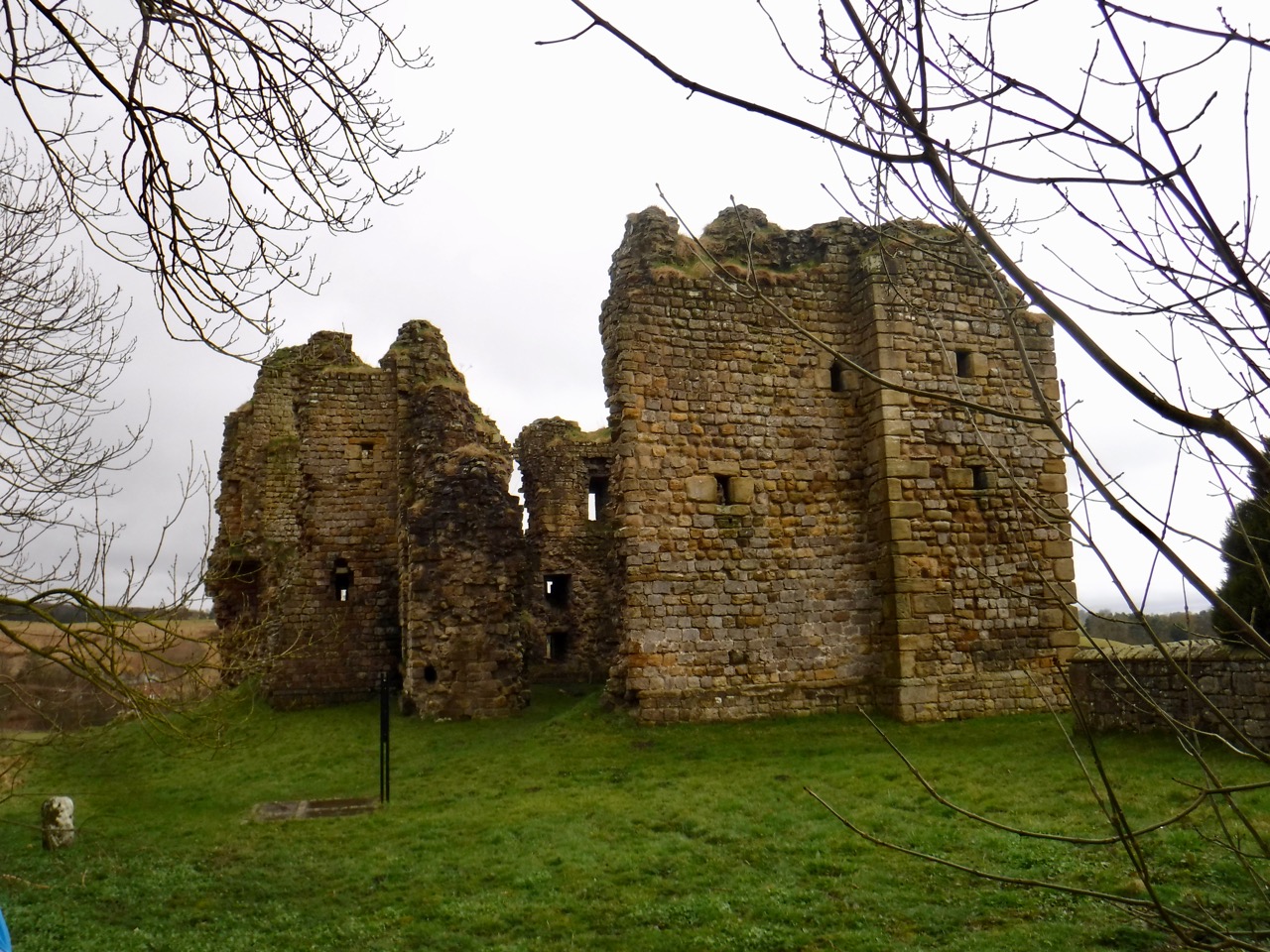 The castle dates from 1225. Its name means something like “hole in the wall” and it is likely to have been constructed with stone from Hadrian’s Wall. The castle was important enough that Edward I stayed in 1306, and a later Thirlwall, Sir Percival was killed at the battle of Bosworth Field in 1485, fighting for the Yorkist cause. He was Richard III’s standard bearer and is said to have held the standard even after his legs were cut from under him. He likely died by the King’s side. With the union of crowns in the early seventeenth century, the borderlands lost their need for castles and Thirlwall fell into disrepair.

From Carrvoran or the head of the hill just over against it, down to Tippal water, both the walls and ditches are very conspicuous. They leave Thirlwel castle to the north. Here, according to tradition, the Scots and Picts broke through the wall. But the castle might be so called from the passage of the river through the wall. Just beyond Tippal water and this castle Hadrian’s vallum makes a little turn, whereby the walls begin to diverge, and Hadrian’s vallum becomes more obscure. Farther west, at a house called the Chapel, which stands within a castellum, the walls are about five chains distant from one another. For about a quarter of a mile before, Hadrian’s vallum and ditch, the south and north agger, are all in the second or third degree. But at the Chapel all of them again begin to be obscure. For the space between the two rivers Tippal and Poucherling, Hadrian’s wall is mostly in the second degree, and from thence, except a little here and there, continues obscure to Burdoswald. But near the chapel Severus’s ditch is very large, being in the third or fourth degree, and the wall itself in the second. The military way isalso visible in the first or second degree. At Foultown the way is lost, but the wall and ditch continue in the second degree. And Hadrian’snorth agger is here and there pretty large.

After the castle, we crossed the Tipalt Burn and headed back to the Hadrian’s Wall trail. We had left the land of becks (Saxon/Scots) for that of burns (Norse). It is interesting that the Pow Charney Burn is the Pow Charney Brook in the 1829 civil engineering report of the Newcastle Carlisle railway, and the Tipalt Burn here is the Tipple River. In 1789 we had the Rivers Tippal and Poucherling. I can’t find the derivation of either. 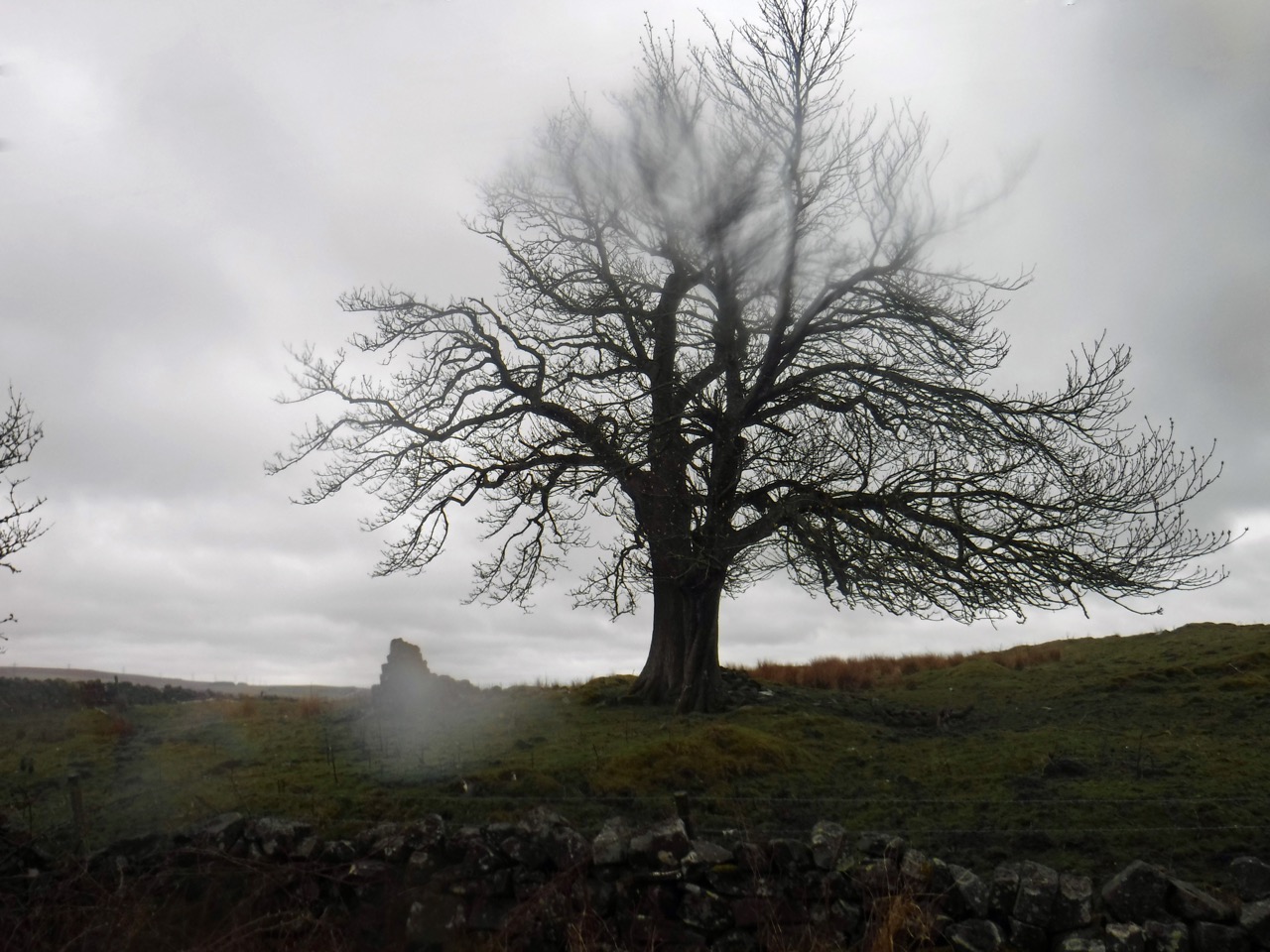 Our stroll up a gentle climb brought us to a stone dyke with a gate that proved too tricky to open and a stile which took us out onto exposed moorland. Once back in the wind (and rain) there was no question that full wet weather togs were needed so we climbed back over the stile into the lee of the wall to change. A couple of walkers caught up with us while we we changing, but they didn’t really seem properly attired and we noticed they turned back soon after. But we pressed on, walking into the wind and rain.

Though the photos may look as if there were times without rain, that is because I dried the lens for each shot and took  two or three shots at each place. 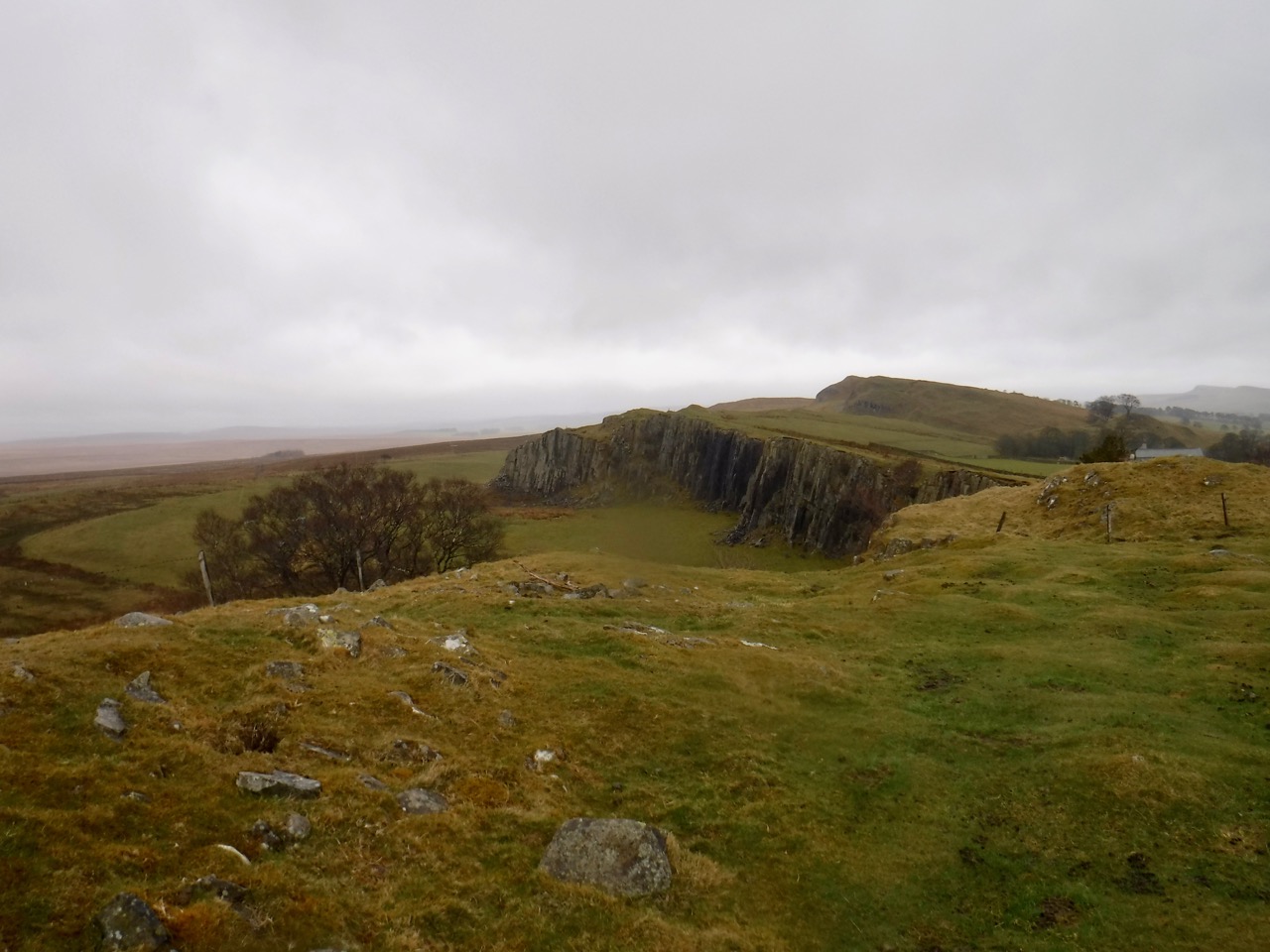 The day’s walk was mostly on exposed ridges with more names than I can remember without looking at the map, and included Walltown Crags, Cawfields Crags, Winshield Crags, Steel Rig, and Highshield Crags. We had multiple ascents and descents on slippery rocks making it slow going. But much of the walk was beside actual remains of Hadrian’s Wall or visible remains of the vallum. We reflected that Roman soldiers would have experienced similar weather while building and manning the Wall we walked beside. 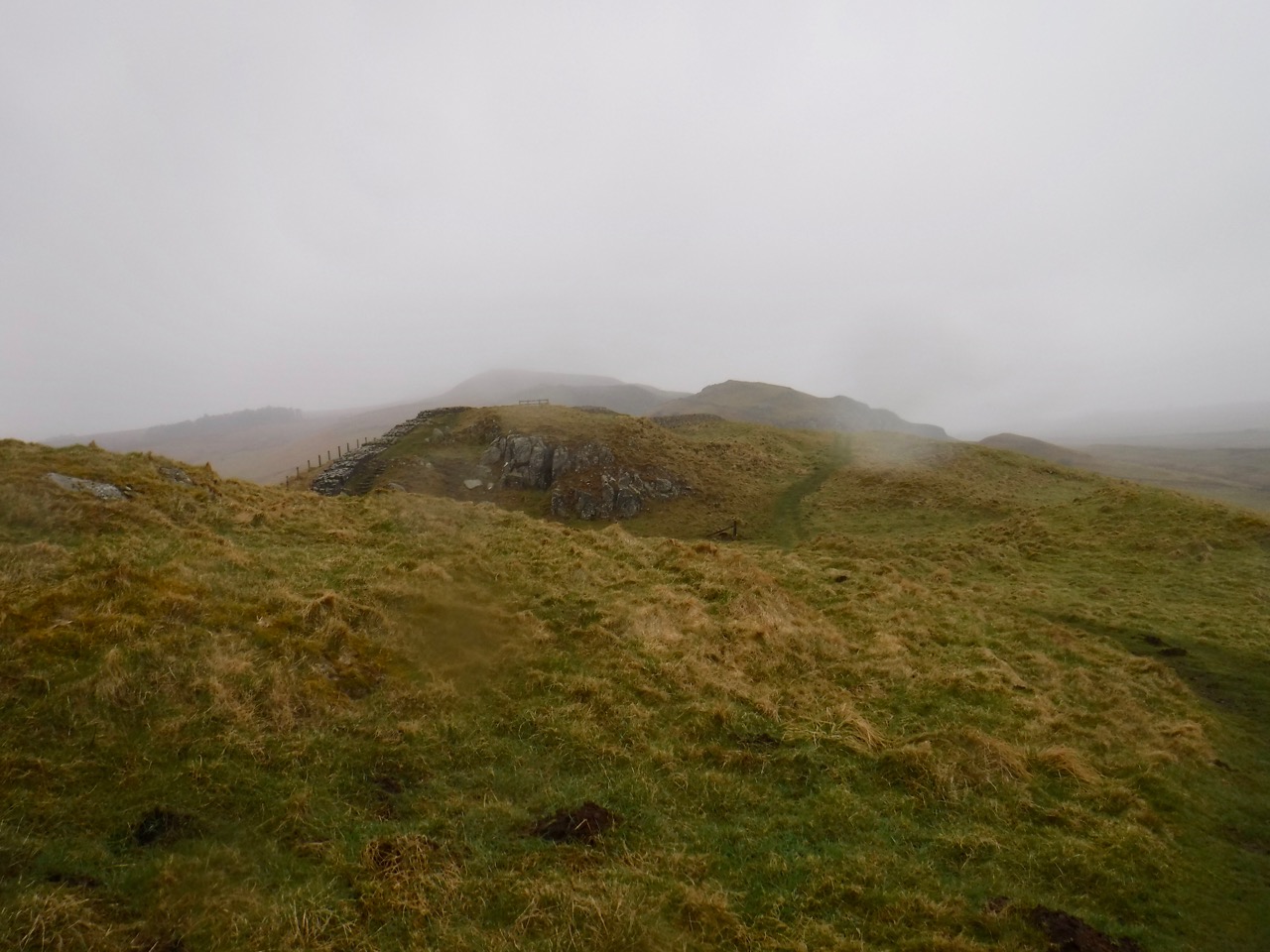 There are a few places along the way where the trail drops off the exposed ridge, and in better weather these would have been pleasant places to stop for a wee drink or a bite to eat. We had a wee break for coffee in a shallow hollow in on of these gaps. ( I originally described these as cols, but gaps feels better.) 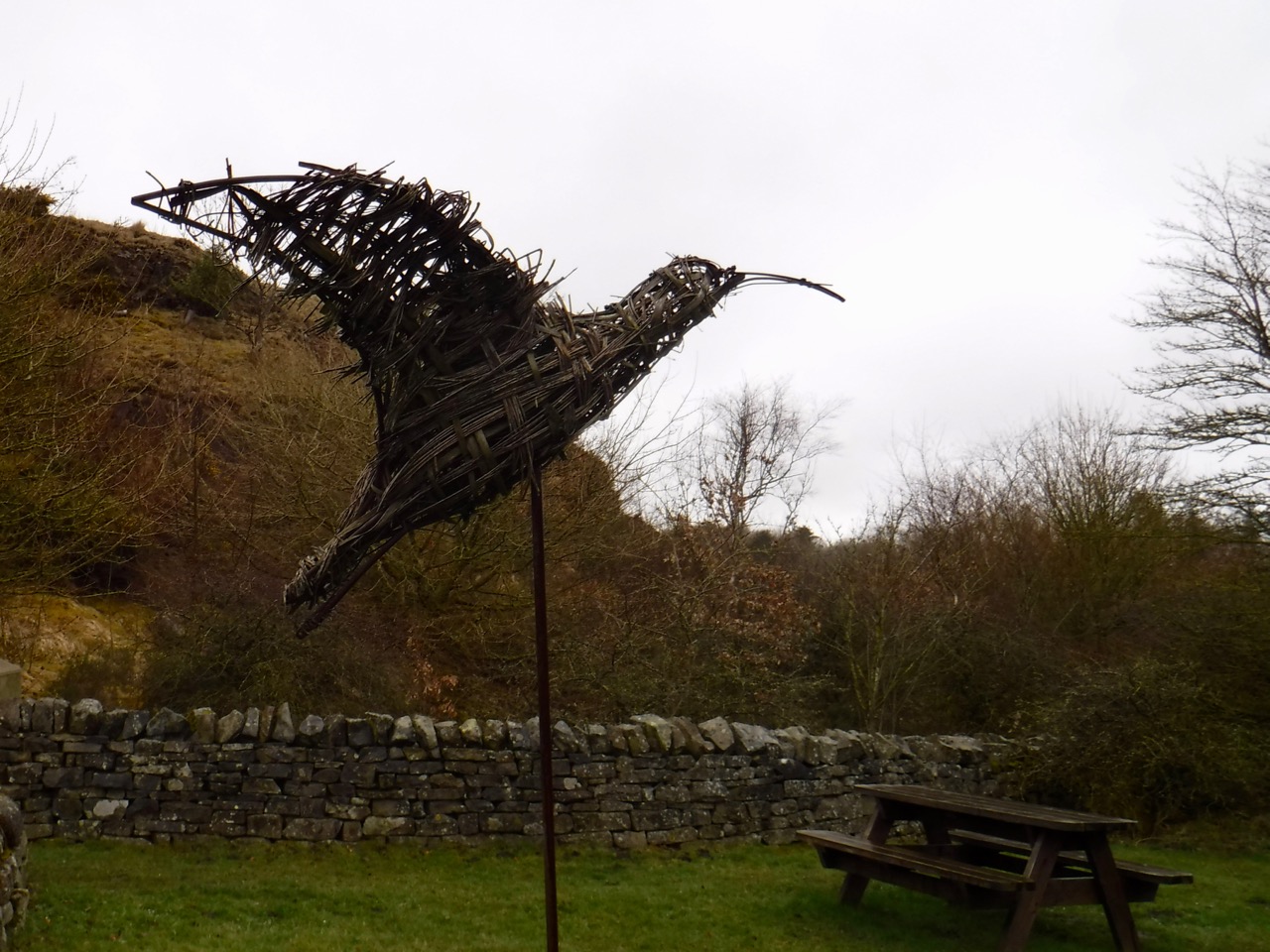 Walltown quarry had an empty car park, toilets, picnic benches, a bird sculpture, and a kiln/oven. A deer watched us from a stand of trees by the Quarry Lake, and we had to watch where we were stepping because of all the frogs on the path. I stopped counting after two dozen. There were a few riding piggy back on others and at first I thought they were mating but those riding were all much smaller than the frogs being ridden. Apparently some frogs will carry their young, but I’ve never seen it before. 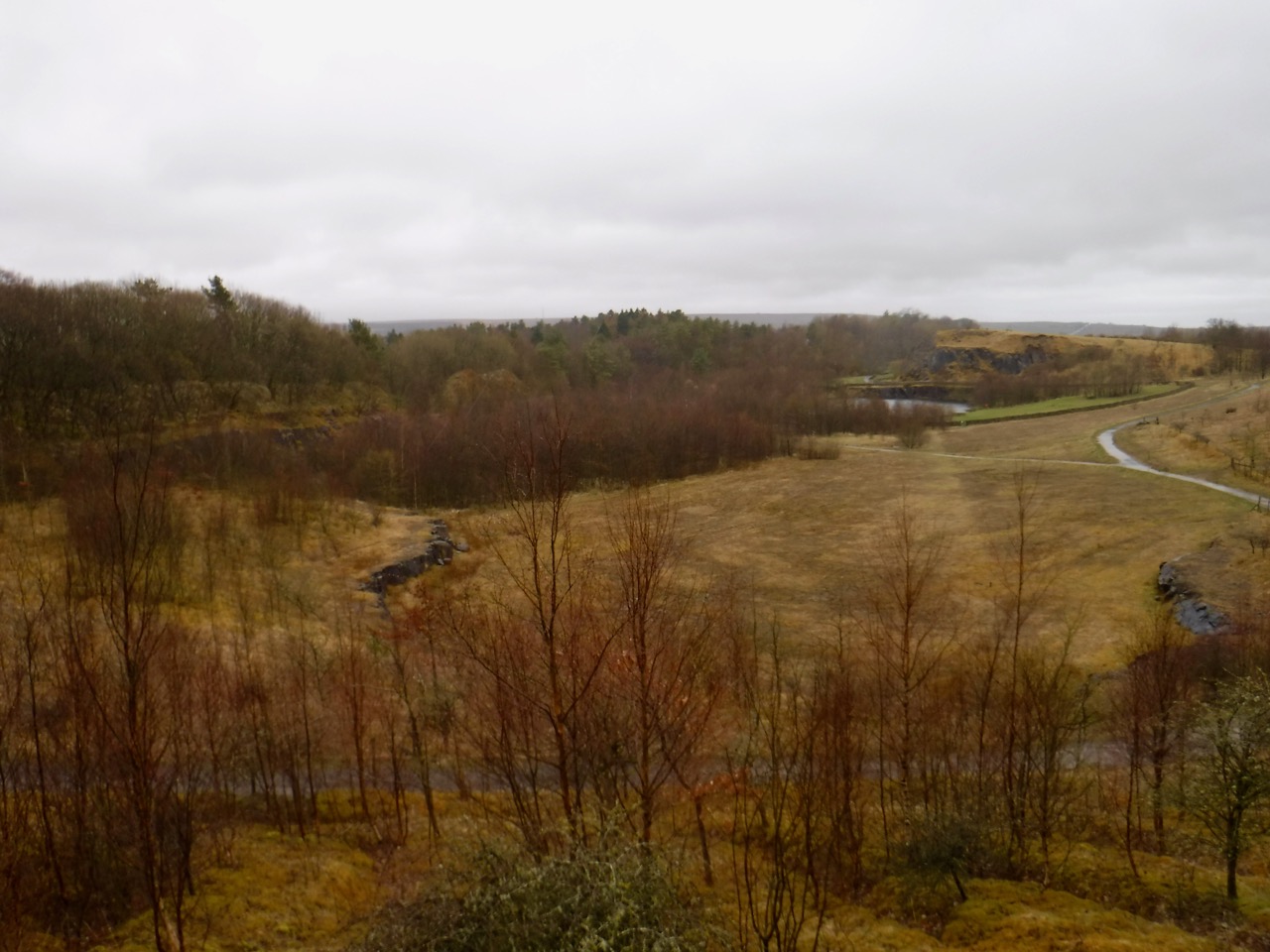 Looking back to Walltown Quarry

We passed turrets and milecastles, and every so often a larger fortification such as Aesica  and Vercovicium. At Aesica (Great Chesters) we noticed that the field by the farm had the remains of turrets at each corner, not something one normally sees in farms in the UK. 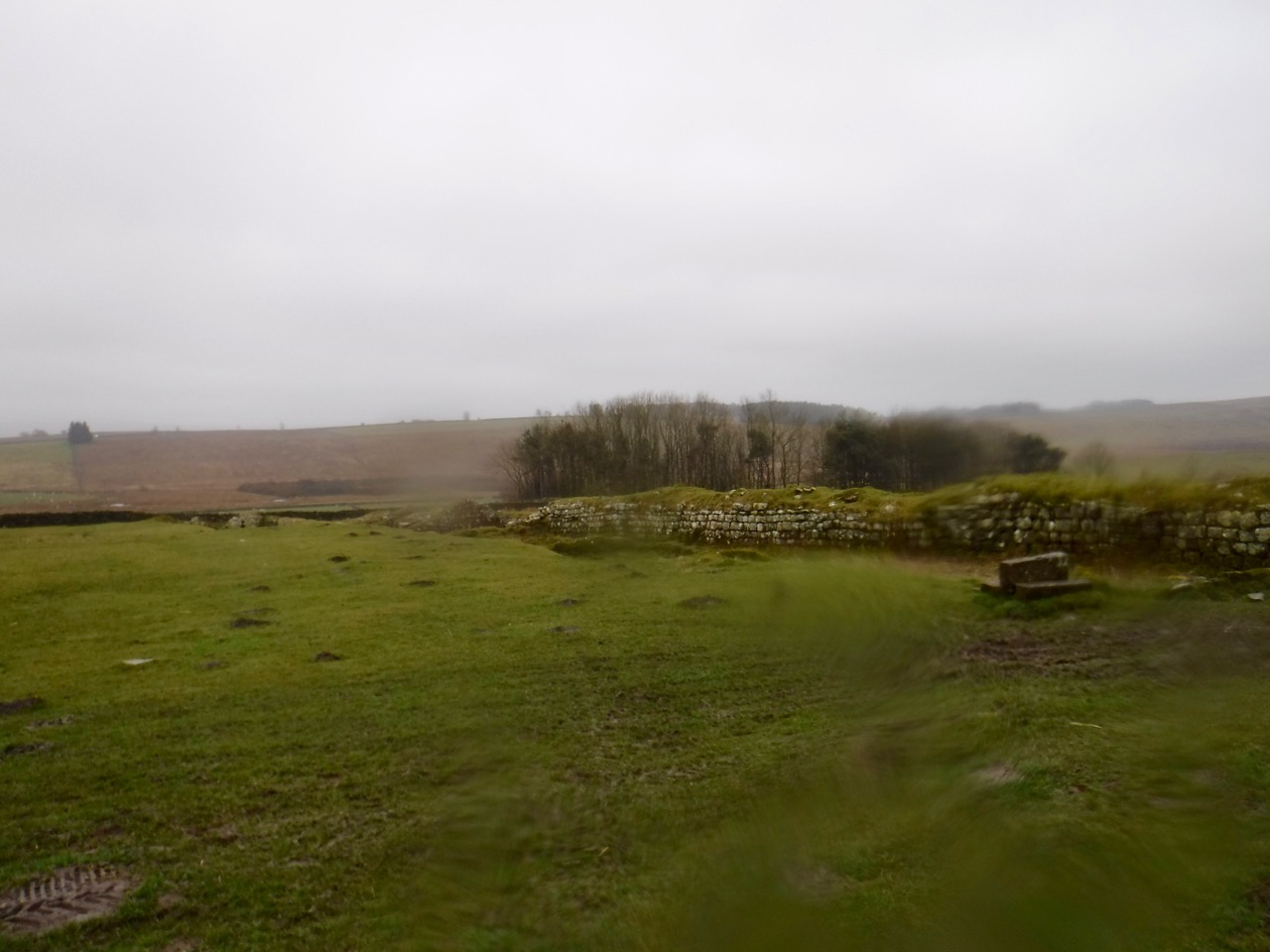 We were looking out for a likely spot for a lunch break and eventually gave up and decided to stop anywhere with a bit of shelter. So lunch was at at Cawfields Quarry. It was still raining, a heavy drizzle really. There were picnic benches, but no shelter other than the public toilets. The best shelter we could find was in some trees and these might have protected us from the rain a little better had they been in leaf. But there were moss covered trunks for seats and the rest was welcome. 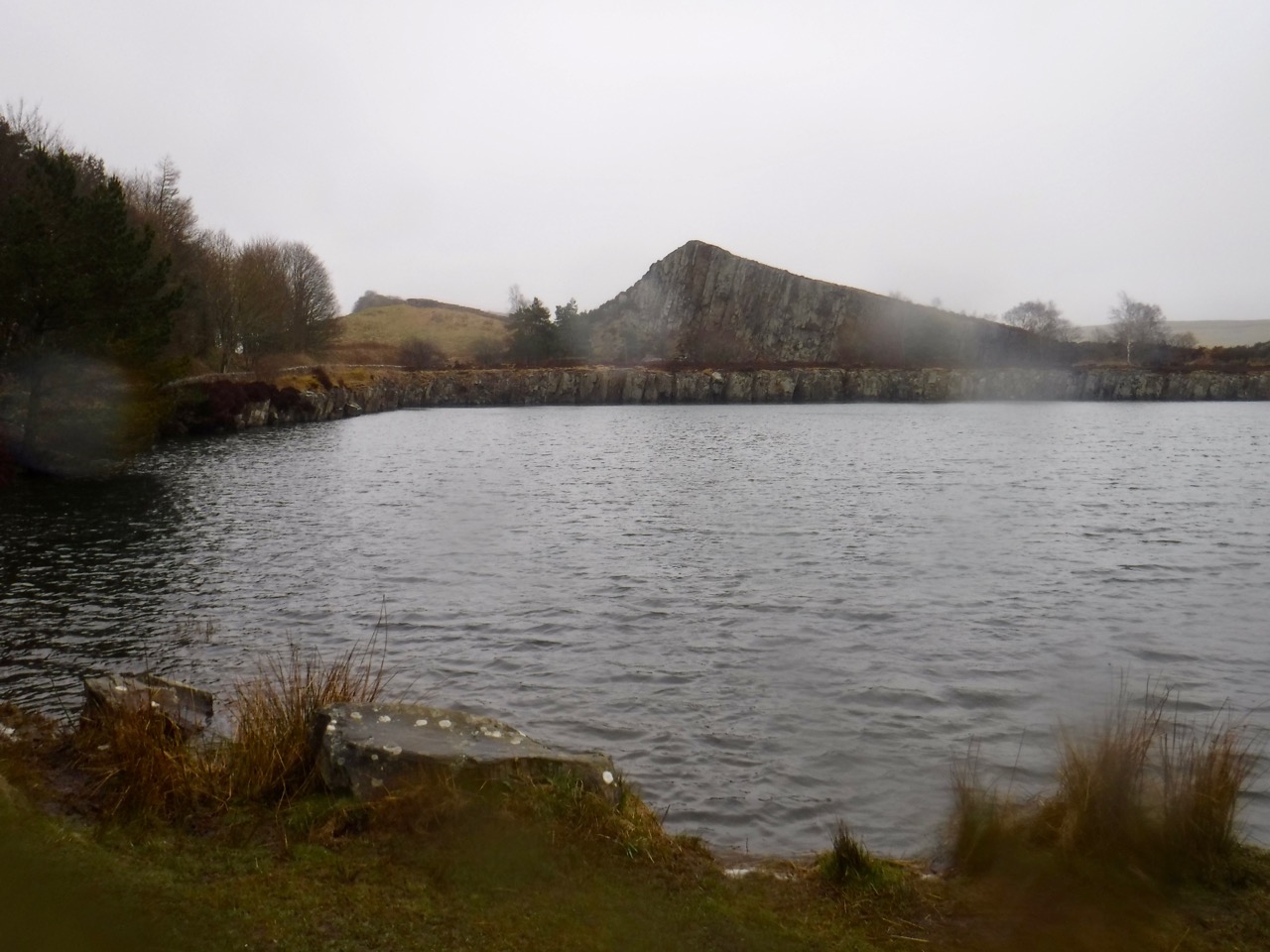 At lunch I got the map out and realised we were making quite slow progress, having taken three and a half hours to walk a little under 5 miles. The terrain was mostly to blame I think, forcing us to take care with each step, and later in the walk this was brought home to me since I fell three times, and almost fell many more times. I took special care on the rock steps which were often muddy, and when walking through mud, but I must have let my guard down when walking on grass. The mud I fell into had mostly been washed off by the rain but I fell a final time as we walked towards Housesteads and the rain didn’t get a chance to wash that mud off. I probably should have taken more notice of myself rather than looking at my footing. I caught my foot on rocks a few times, and rather than recognising that I was tiring, I spent my mental effort thinking how I would describe it in the write-up. I had decided that something like “the foot lifting sub-routine became corrupted” would do nicely, or perhaps “walk.exe became corrupted”. 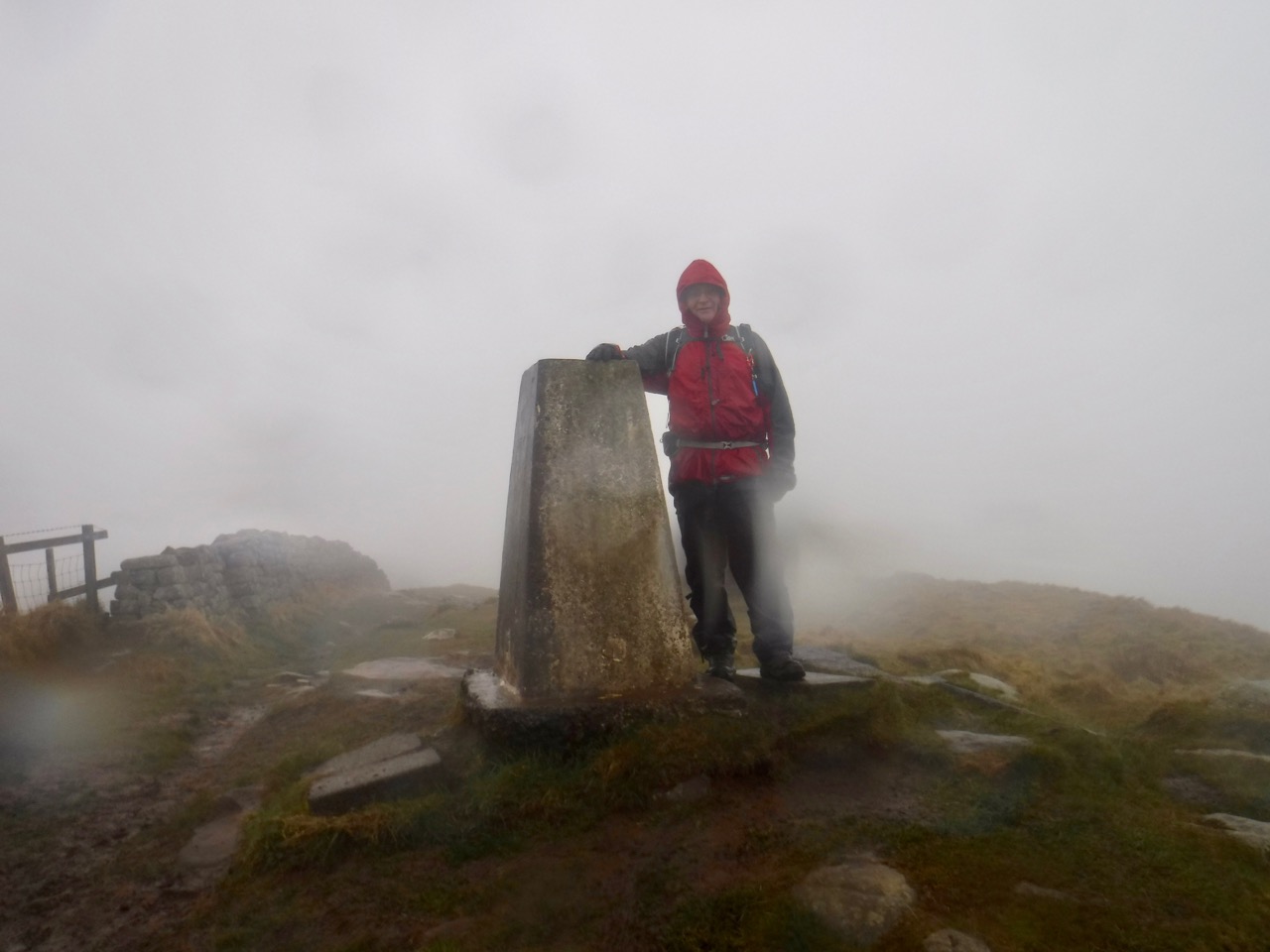 Along Winshield Rig we were walking in mist. We paused at the trig point to admire the ‘view’, see above. Each time we had descended and reclimbed a gap we hoped it was the last, but then another height would emerge from the mist. Each time sapping a little more of our morale. Esmerelda warned me that she was approaching her tantrum threshold. 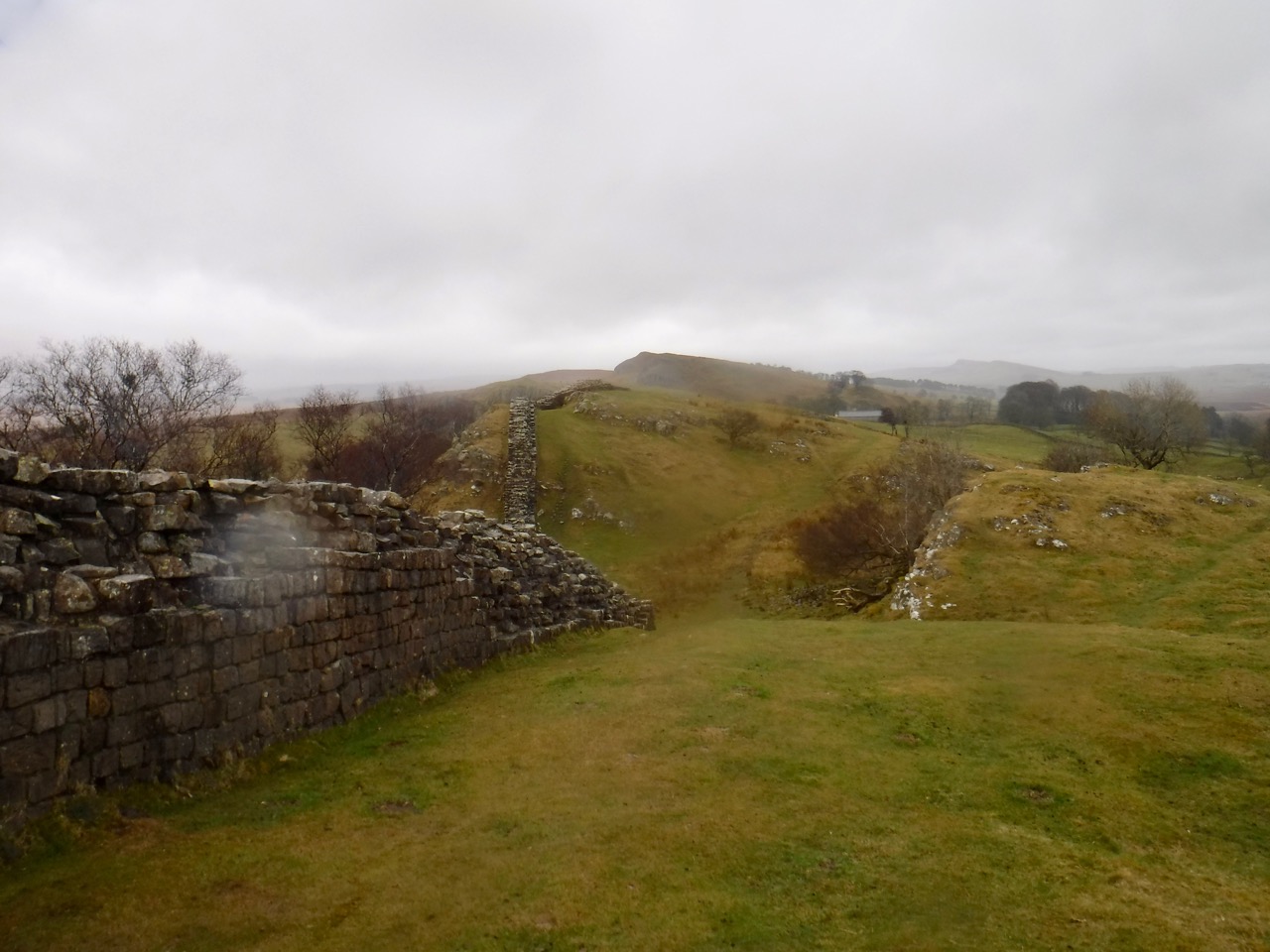 My failure to recognise fatigue came home to roost half way up the climb onto Steel rig. We were passing a French Family, with cries of laissez le passé (or something like that) from the father when I was then struck down with cramp in first my left thigh and then a few seconds later the right. I couldn’t walk any further and found I couldn’t even bend my legs to sit on a rock. Stretching didn’t help. The cramp seemed well localised to vastus medialis on both sides. If only we had brought a physiotherapist with us. But we hadn’t so I took a stiff dose of Jelly babies (about ten) and after a few minutes I could complete the climb. I suspect that the repeated step-like climbing up and down had fatigued my thighs. The cramp recurred a little later, but settled with more rest and water.

I decided to look into exercise induced muscle cramps, and it turns out I was mistaken in my beliefs that these are related to electrolyte imbalance or dehydration. I suspect my problem was repeatedly performing an unaccustomed type of exercise (climbing rock steps) with inadequate rest breaks (due to the weather). I’ll take catching my foot and falling more seriously next time. 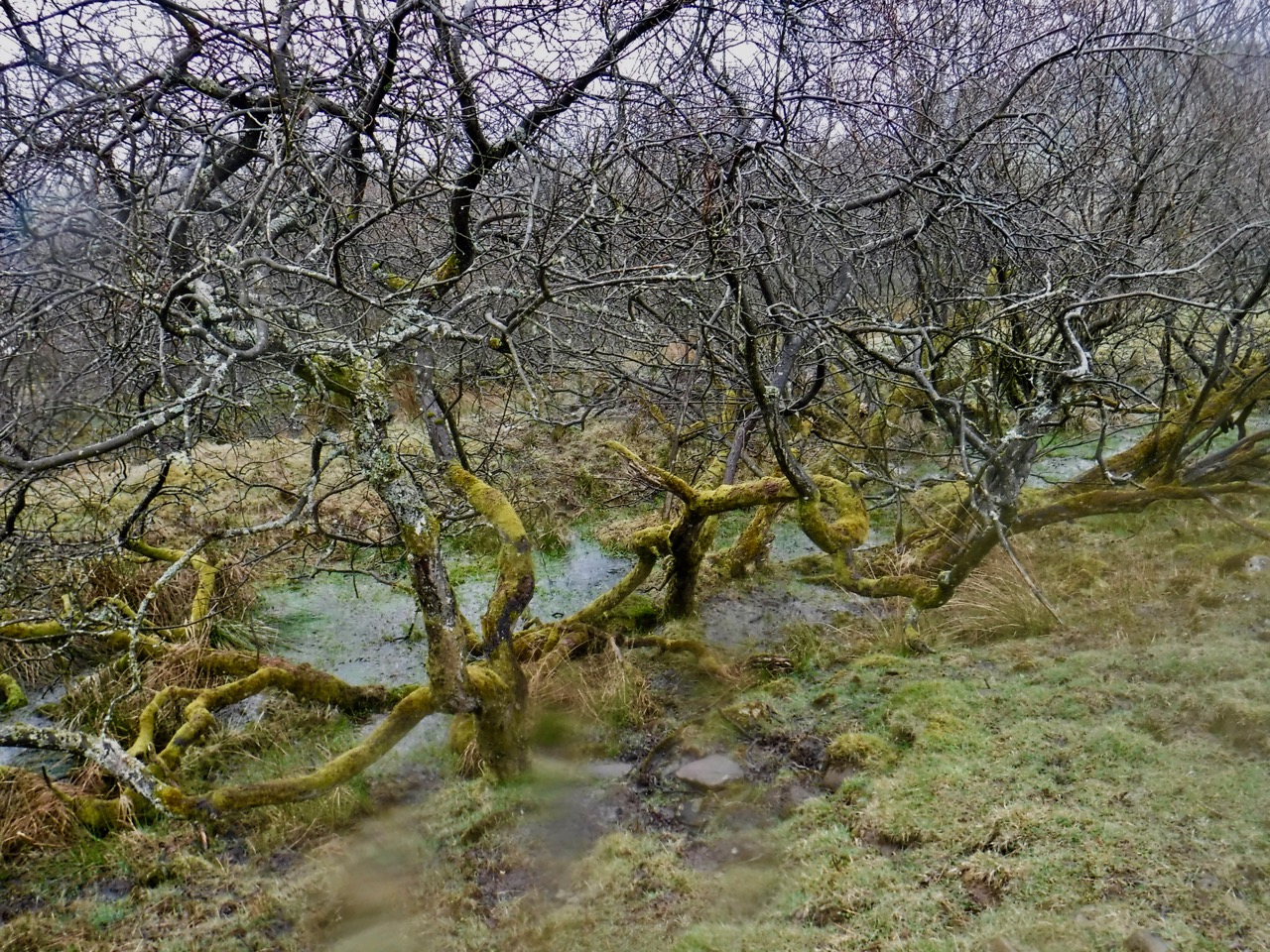 As we approached Highshield Crags we climbed into a Scots Pine woodland with Crag Lough beneath us. Some of the trees looked to have had shapes carved into their trunks and I wondered if some ‘natural artist’ had been up there carving the trees. But as we walked on I noticed that some of the ‘carvings’ were too close to the ground for art, and I wonder if deer had been stripping lichen producing these curves. The photos are all blurred due to moisture on the camera lens.

This walk seemed to have been going on forever. I had put my map away since it had become waterlogged inside its waterproof case inside my waterproof pocket, so had not been able to keep track of where we were. 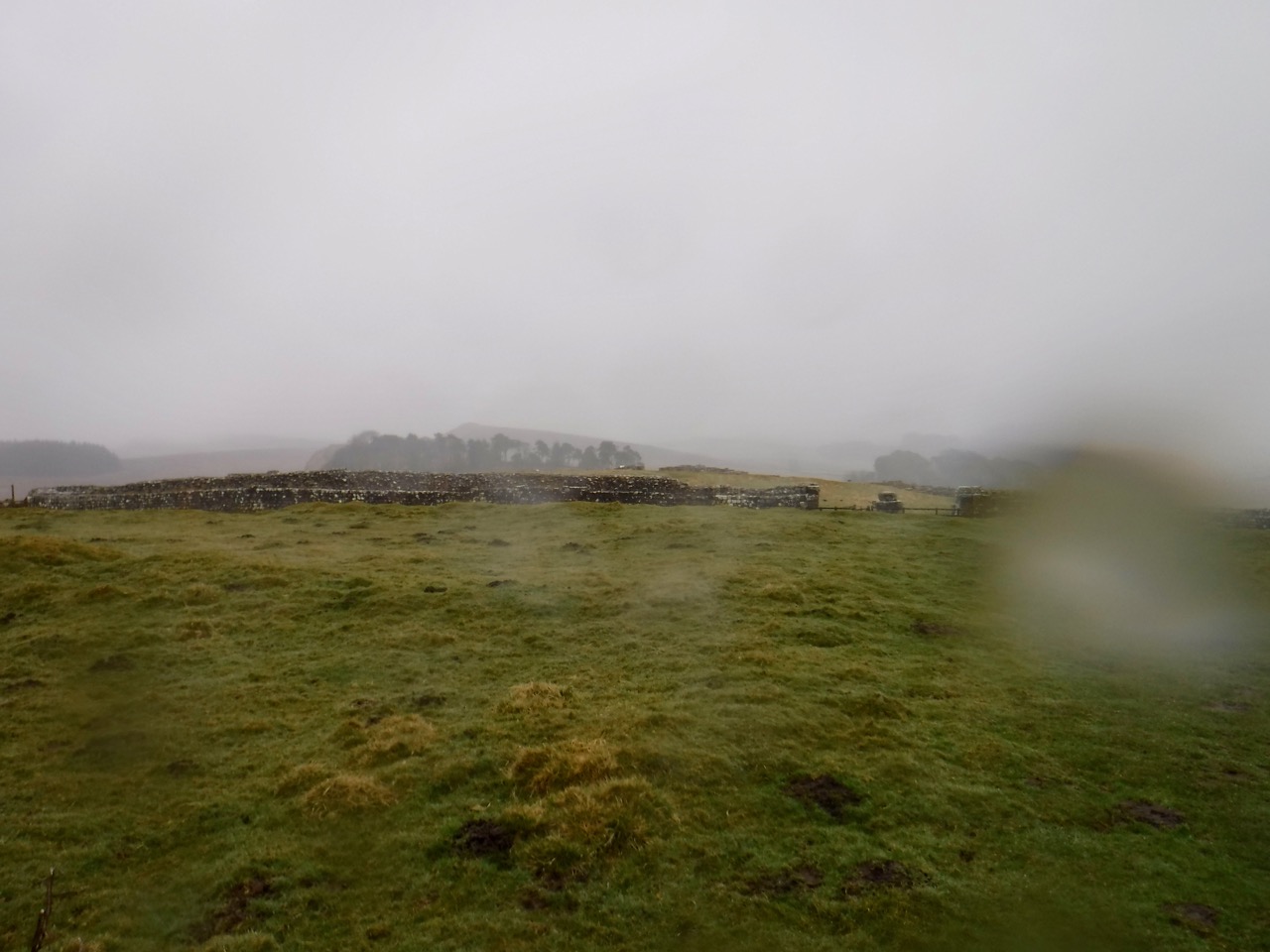 We walked on looking for Housesteads Fort, hoping we hadn’t missed it in the mist, and eventually out of the mist we saw a wall that was too robust for a farm wall  and knew we were there. We followed it off the ridge and found a footpath to the nearby carpark. I was too tired to go round the museum shop.

Luckil there was some shelter at the car park to change into dry clothes for the drive home.

And it was a bloody expensive car-park (IMPO).