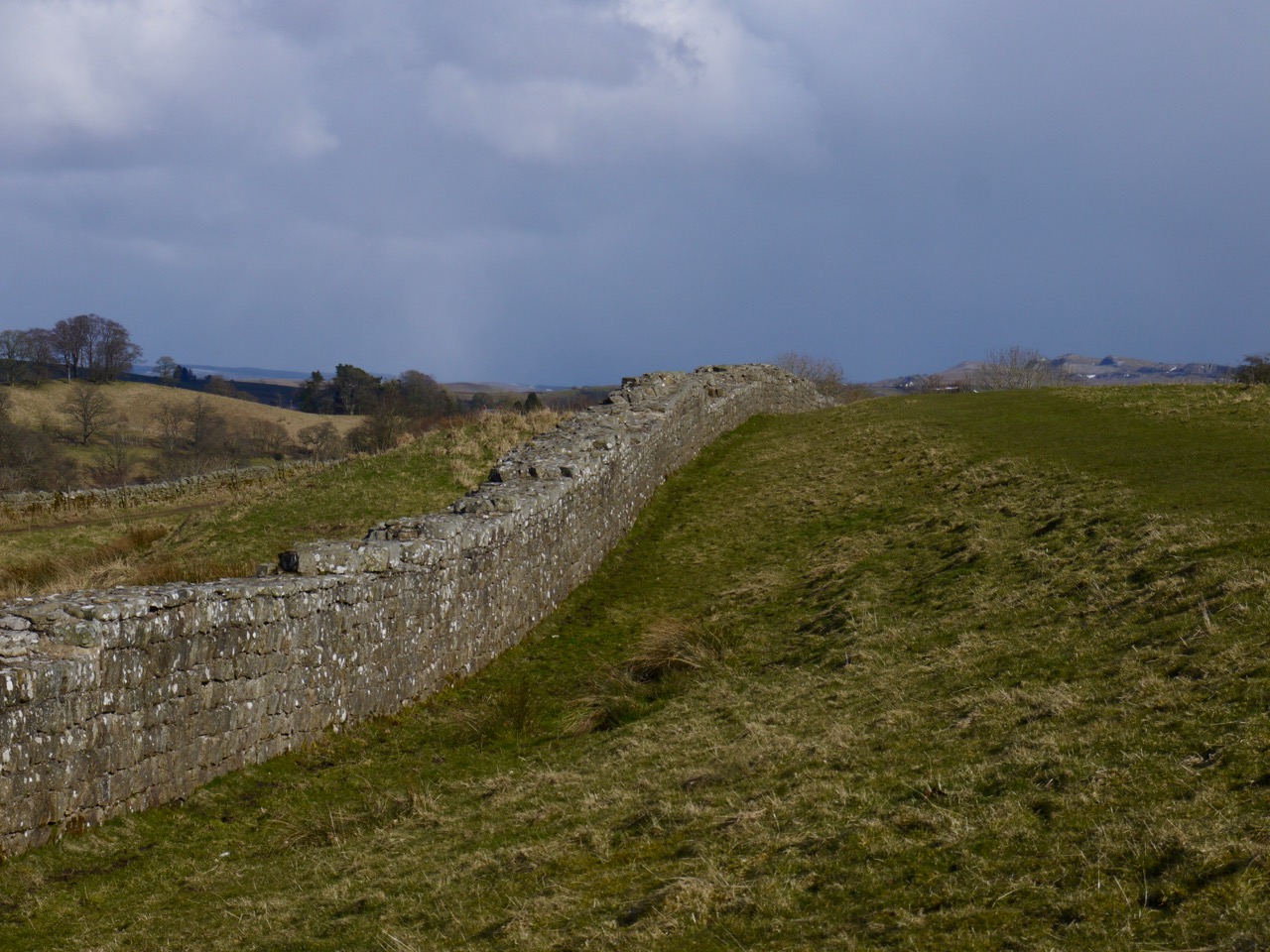 “Bitterly cold with strong winds and snow showers”. That forecast by the Met Office was spot on. Temperature -1°C, easterly winds at 28mph, gusting to 40 mph, snow showers and a ‘feels like’ temperature of -7°C seemed about right. Throughout the day we walked directly into the wind, which seemed to become much stronger when it snowed. We had blue skies at times but recurrent heavy flurries of snow that snatched the visibility away from us. A characterful day. 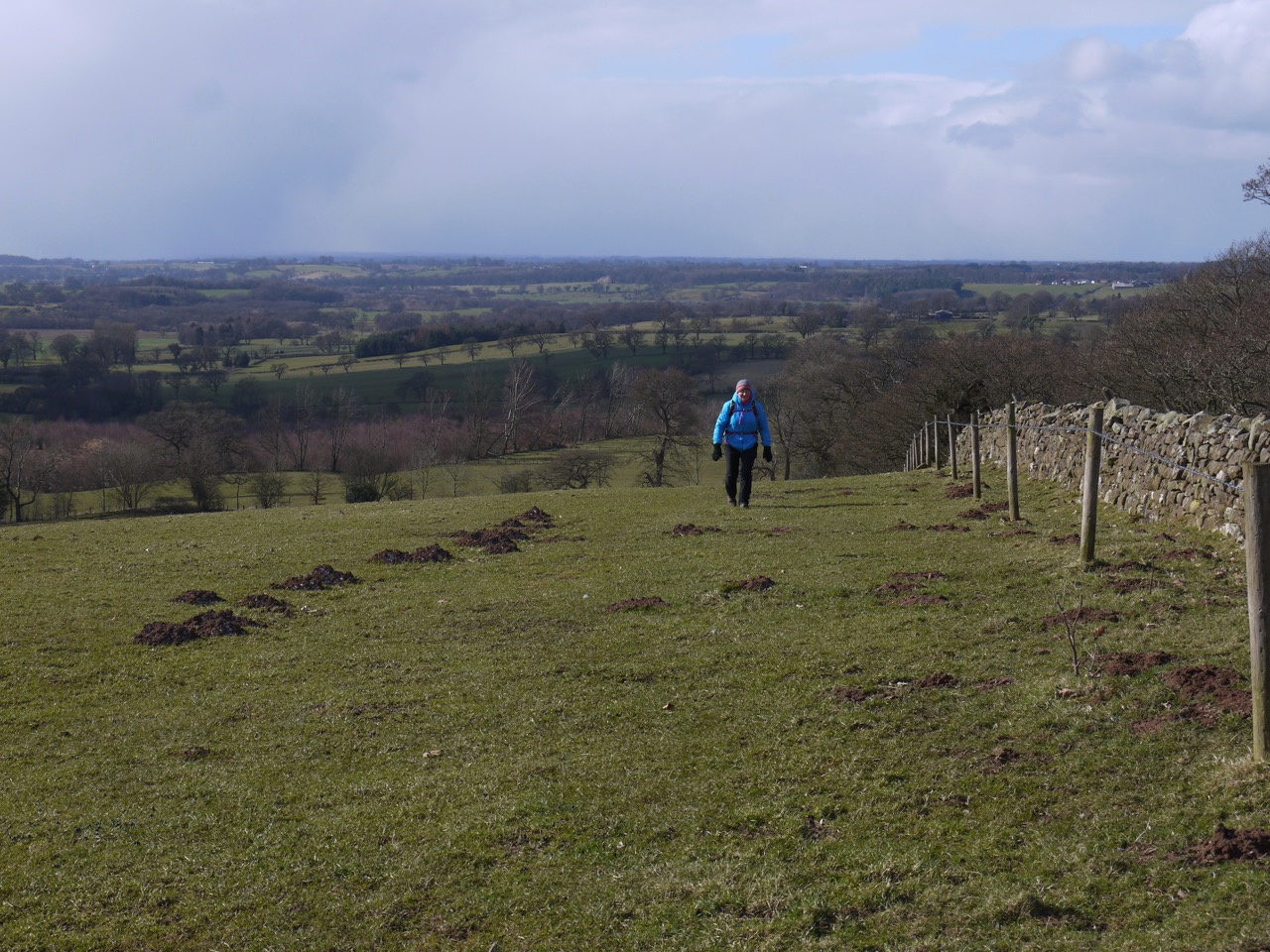 But we were multi-layered, in the literal sense, and I had brought along a quilted jacket as well just in case. My ski mittens proved far more effective than my usual gloves and only once did I wish I had brought goggles, when the snow was blowing directly in my face forcing me to walk hunched looking at my feet, somewhat like Quasimodo, Esmerelda trudging beside me. There were some gusts of wind that negated a step forward, and walking was a much greater effort than usual.

All that aside, I enjoyed this section and there was was quite a lot of the actual Wall to see along the way.

At Dovecote bridge the HW trail leaves the road to follow King Beck for a while, but a sign told ud that the route was temporarily diverted along the road. We tried following the river bank, passing a homemade shelter, but found the path had been washed away. We then tried the adjacent fields but turned back to follow the temporary route. The sign did actually look rather permanent. This meant half a mile along a minor road before we rejoined the HW trail.

After our first snow ‘shower’ near Garthside, we had a warming climb up Craggle Hill, watching Cold Fell appearing and disappearing as the showers passed. 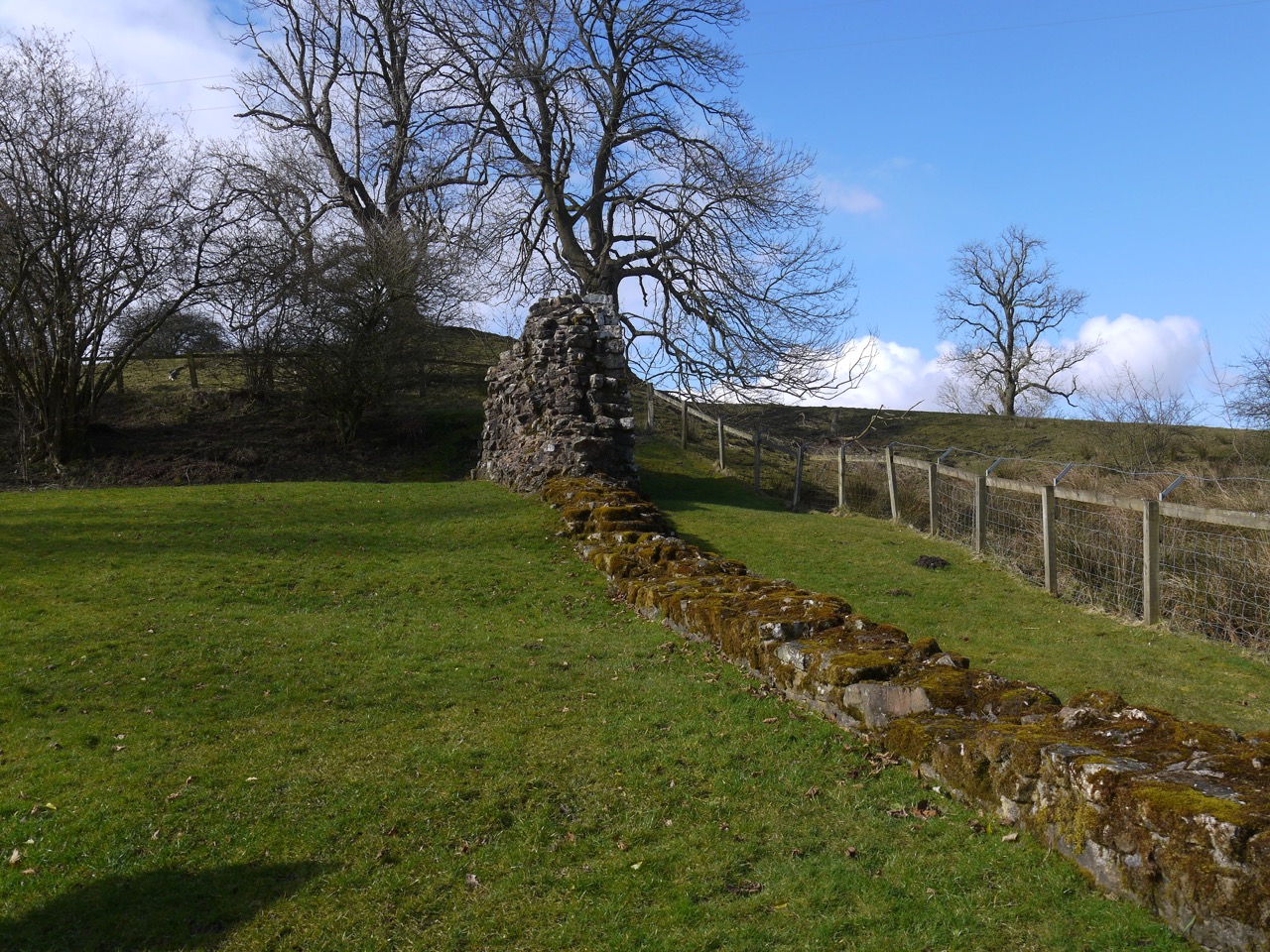 At Hare Hill we came across our first Wall remnant. An information board gave more details and suggested that this section may have survived because it was incorporated in a farm building, while the stone the wall here was carted away to build Lanercost Priory. 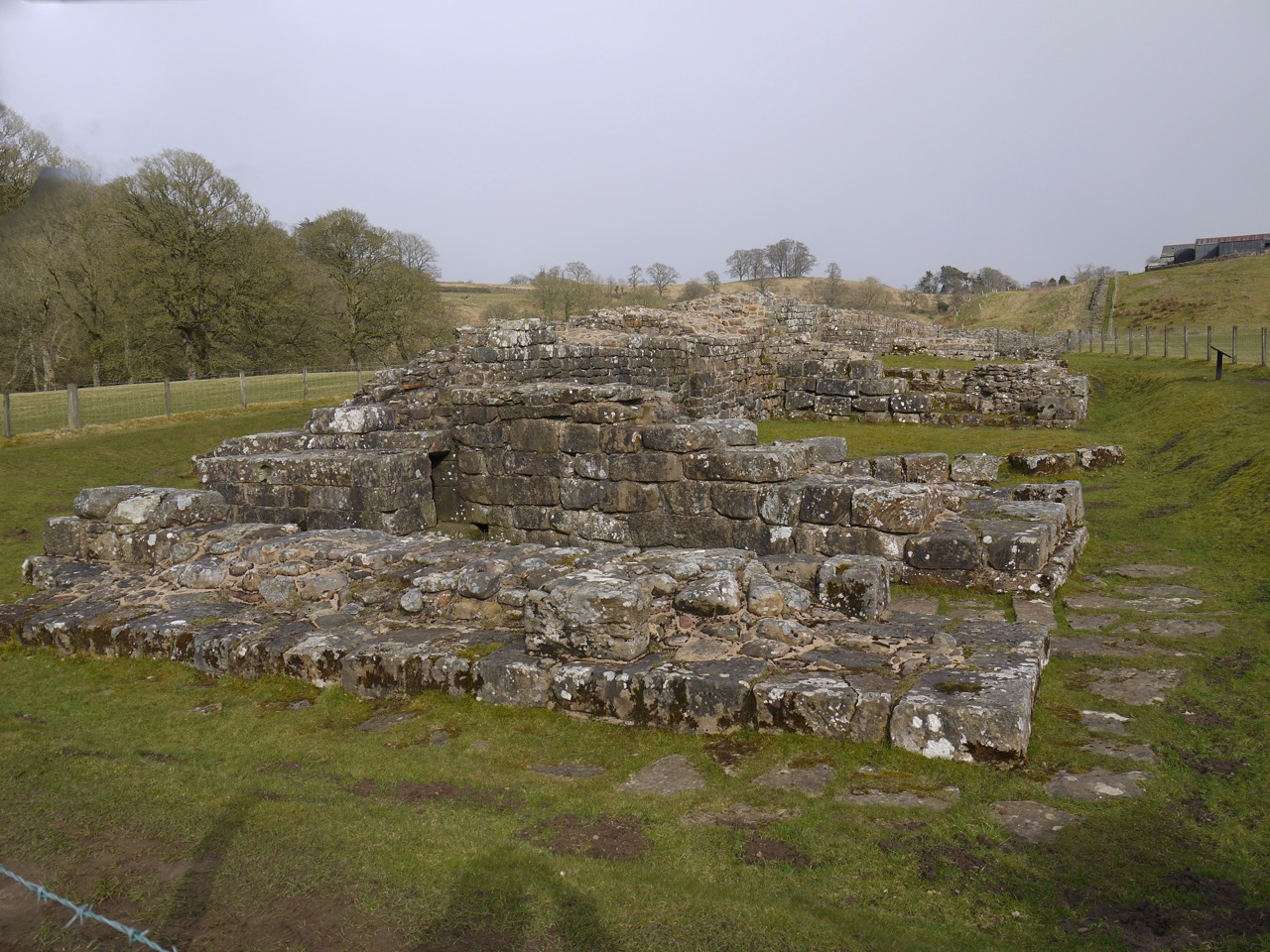 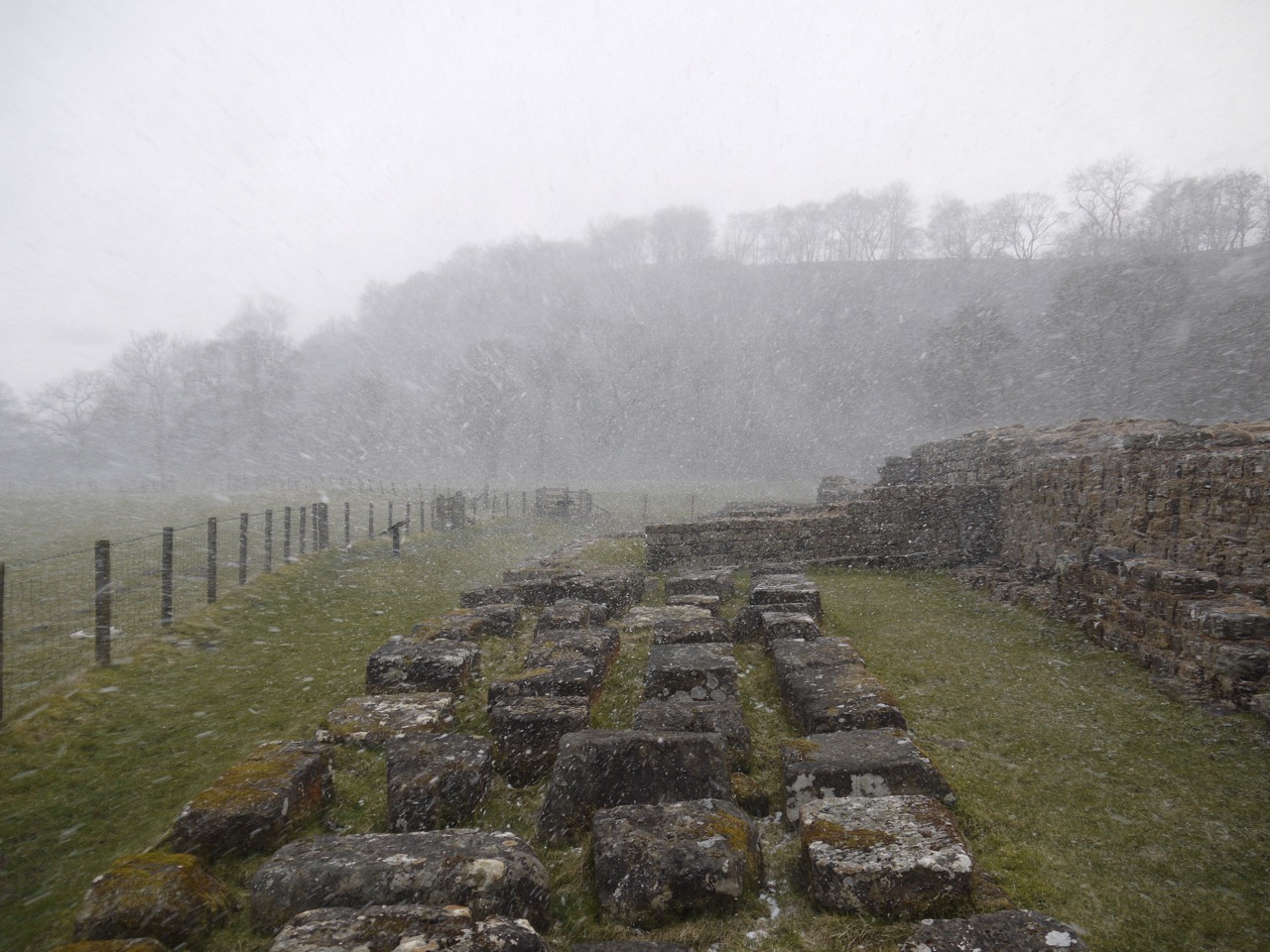 Most of the day’s walking was either beside surviving sections of Hadrian’s Wall, along turf banks on the site of the wall, and past several ruins, each with an information board.

Ahead on the horizon we could see Steel Rigg which grew visibly closer as we walked on. 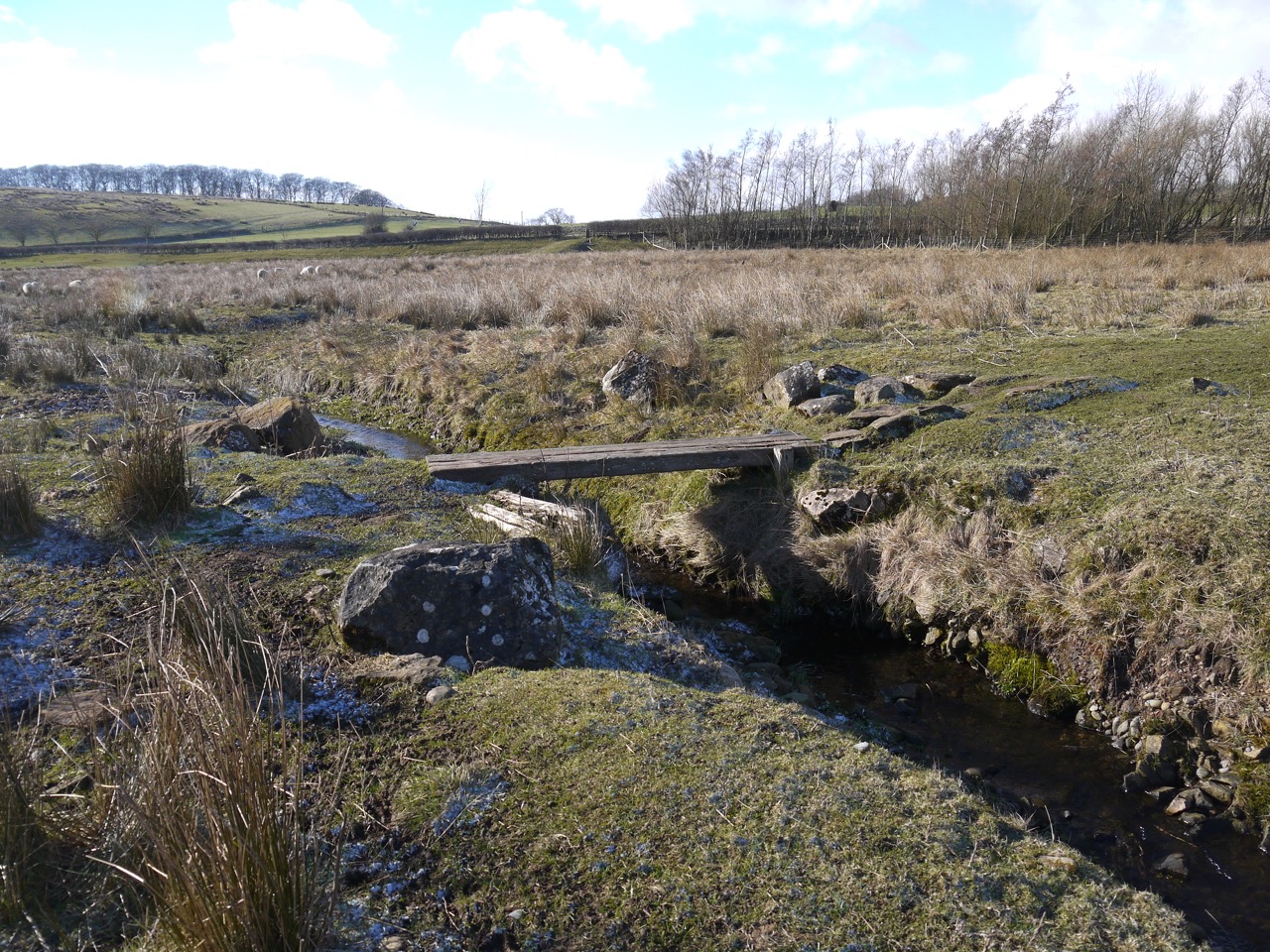 The route was relatively straightforward and well marked. I’ve already mentioned the detour near Dovecote Bridge. We did lose the trail near Appletree. After crossing a footbridge I turned left onto a track and up towards the road, whereas a small sign ahead of me, which I hadn’t noticed, pointed to the right, and after a hundred metres or so a gate too us back onto the turf bank. And finally, in Gilsland there is a notice and signs for a detour. the reason given was “no bridge”. We decided to brave it, and there was in fact a bridge, over a beck that could have been easily jumped. 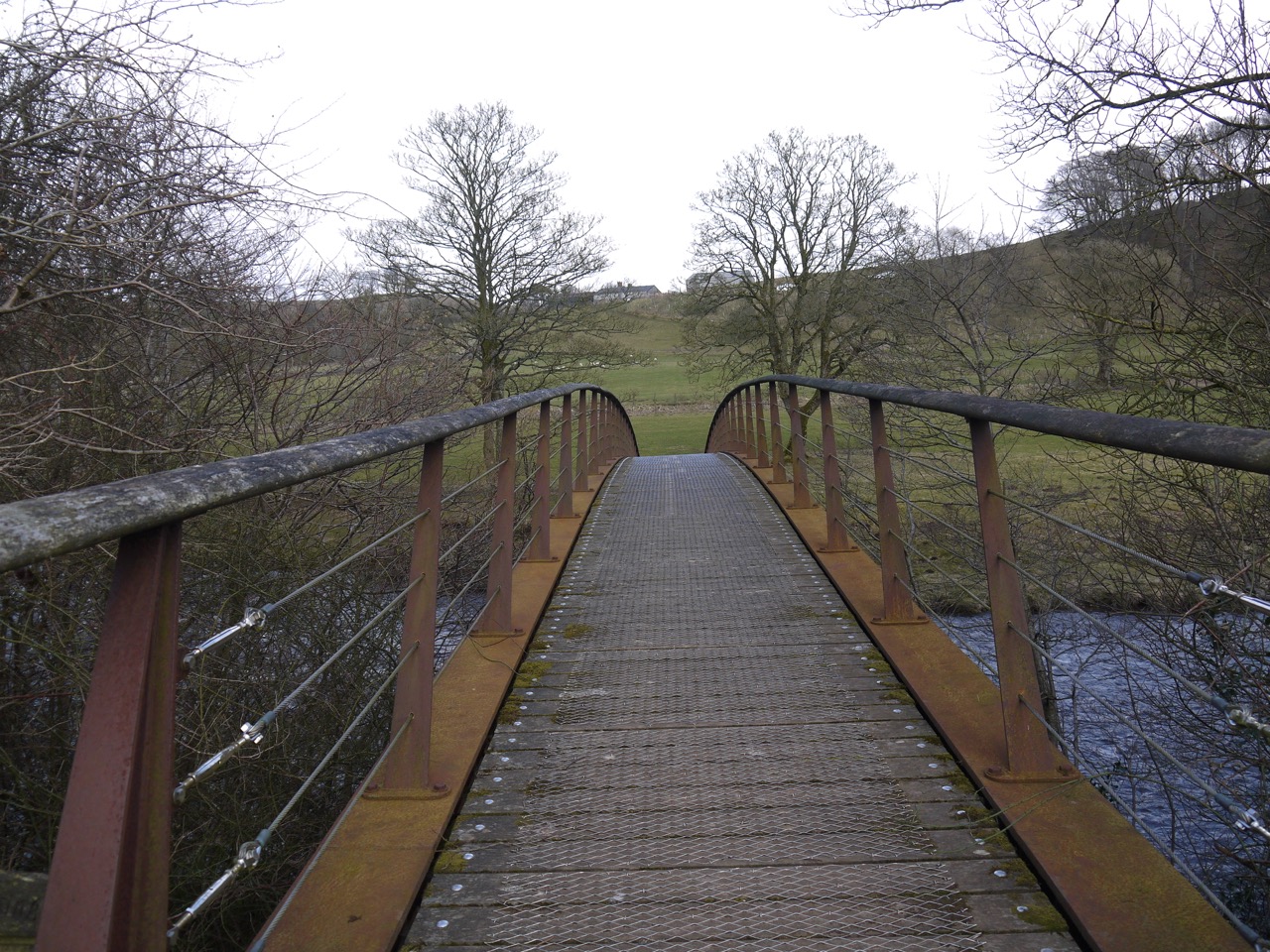 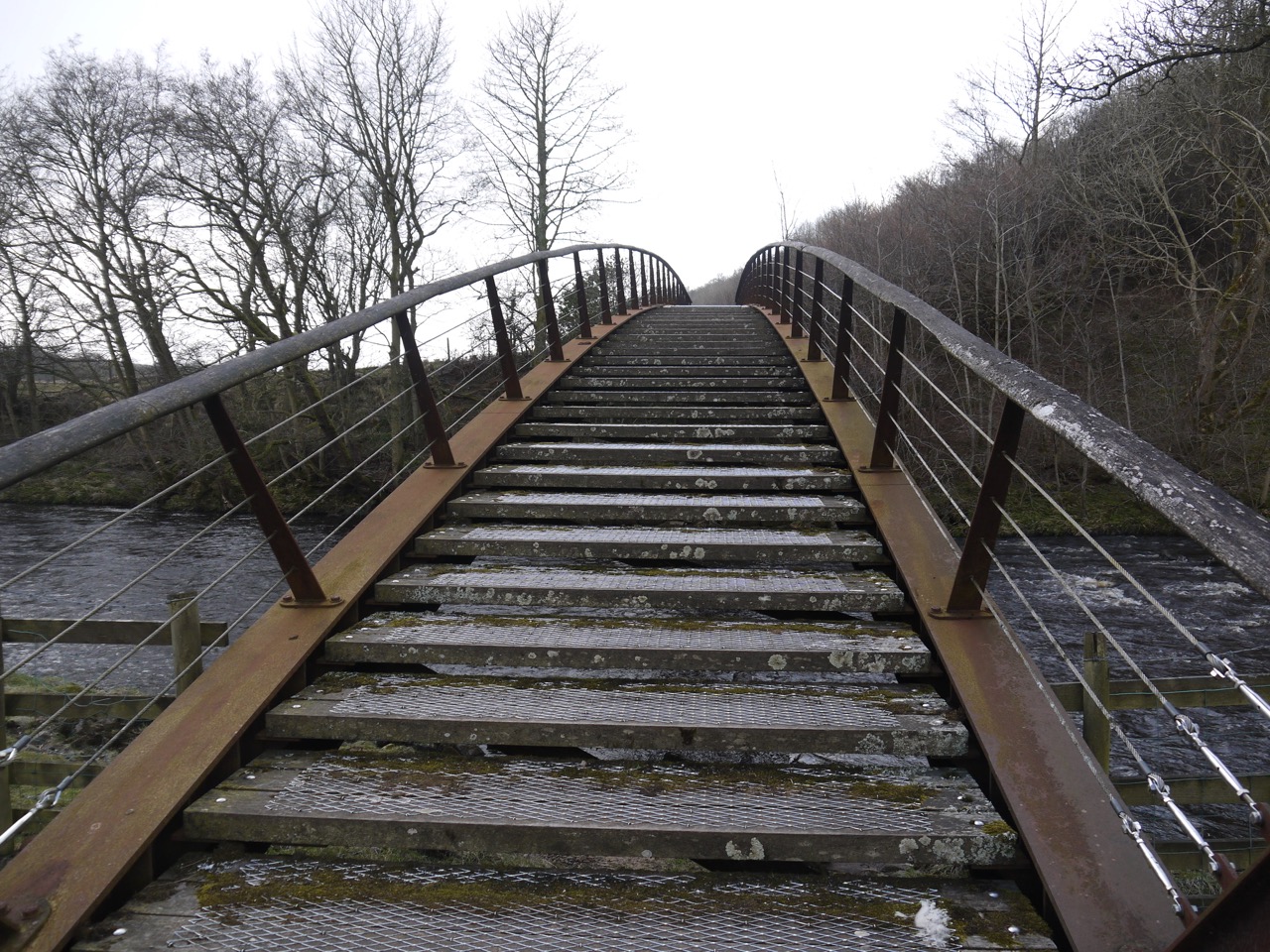 The Roman Bridge at Willowford is long gone, though the ruins of Hadrian’s Wall that stood adjacent to it are there to see. We crossed the River Irthing, on a modern footbridge dating from 1999. Walking across the bridge I paused to look at the river and noticed a sign, “STEPS”. looking over the side I didn’t see any steps, and thought the sign a little strange. Then Esmerelda warned me to be careful since she had stumbled on the steps. The far side of the bridge was stepped. 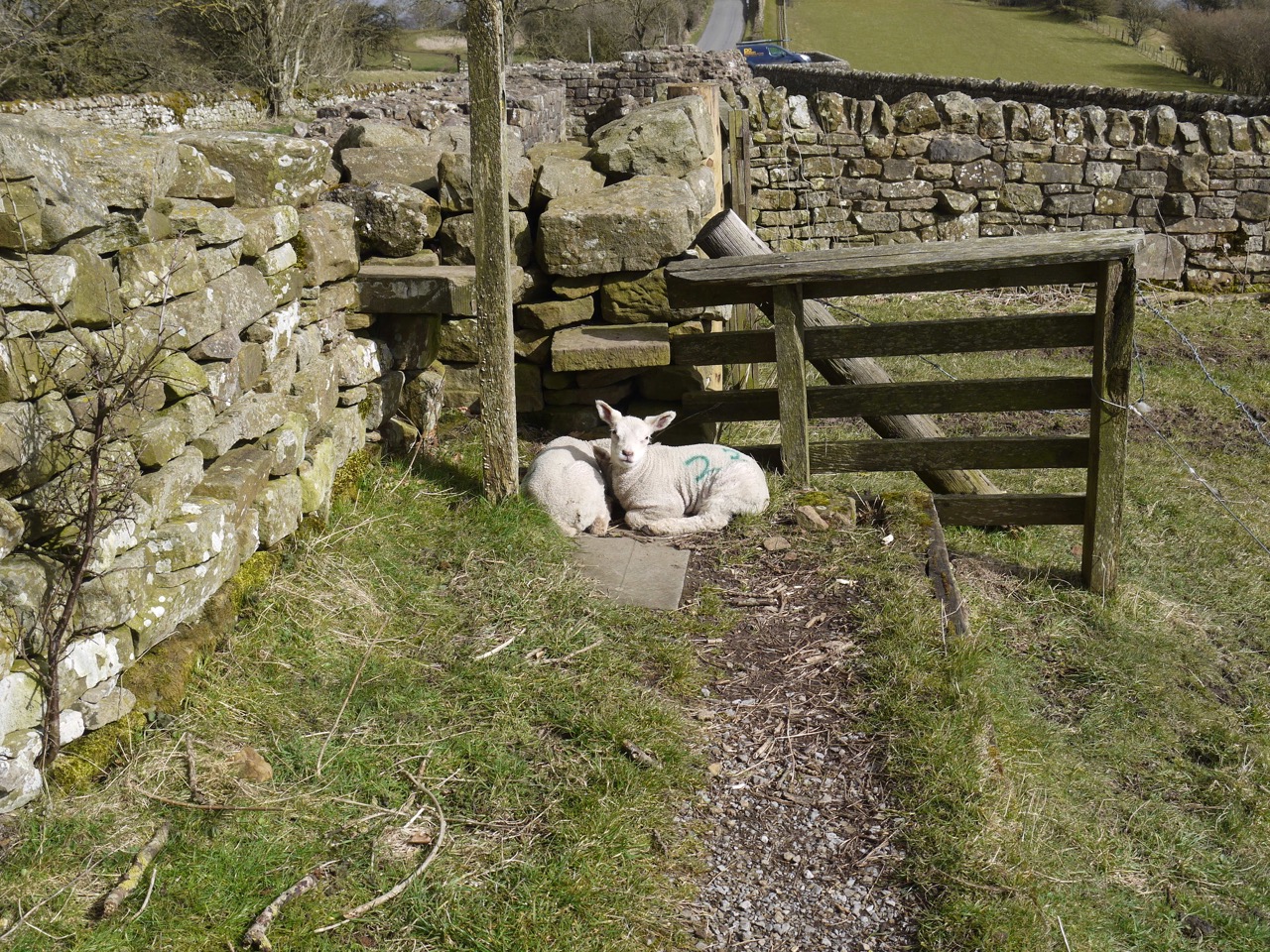 Lambs near Turret 52A

We sheltered in Turret 52A for a coffee break. My photograph of the ruin is taken in bright sunlight, but by the time we reached the turret itself it was snowing so we only stopped for five minutes. We planned to stop at Birdoswald for lunch but found the visitor centre shut and the gates padlocked shut. We definitely needed a break, but the wind was bitterly cold and we could see there was no shelter along the route beyond Birdoswald so we climbed the fence and dropped down into the remains of a Roman Turret. Here we were sheltered from the easterly wind, and had only light snow. 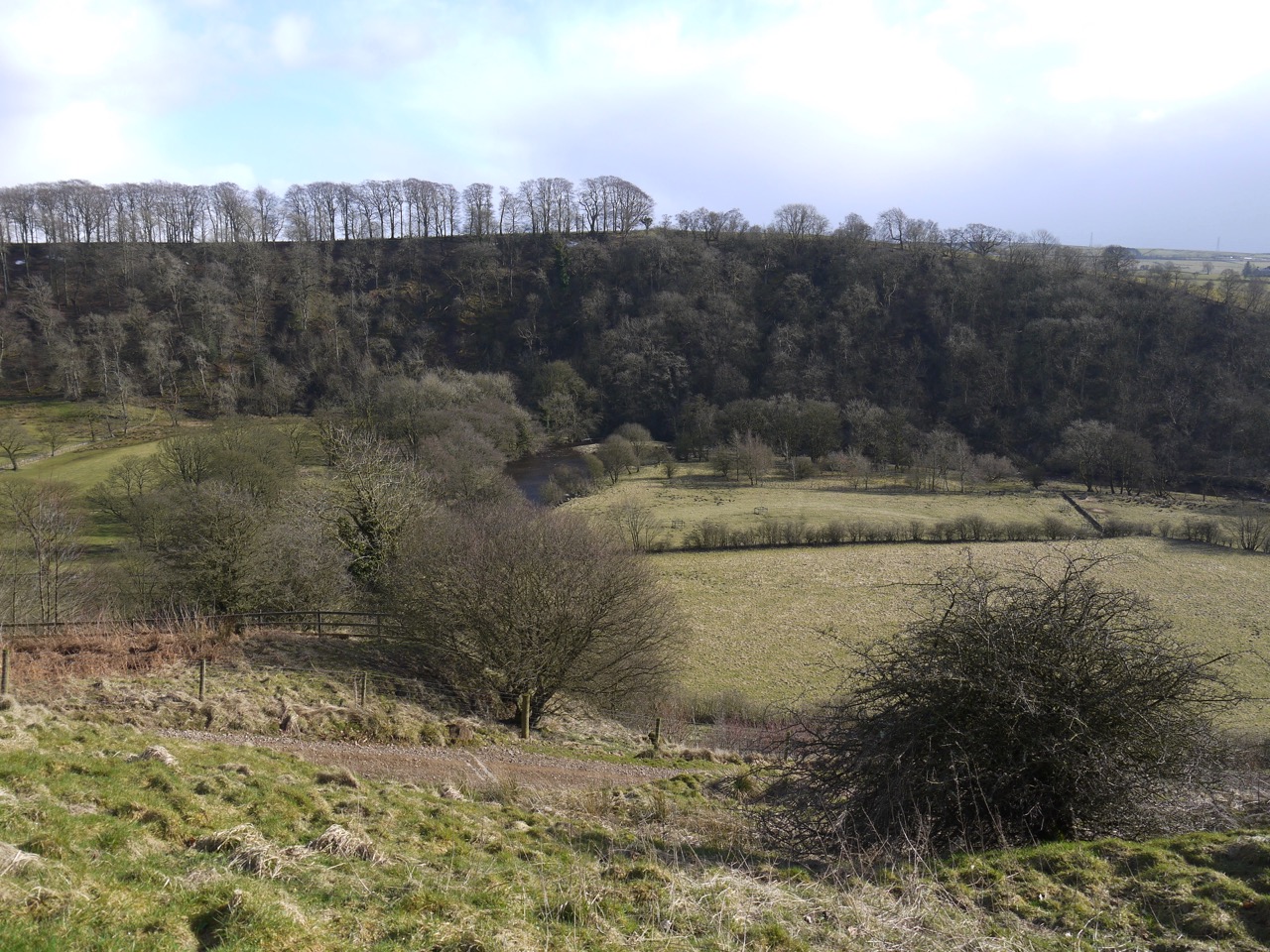 The snowdrops were still abundant, but past their best. 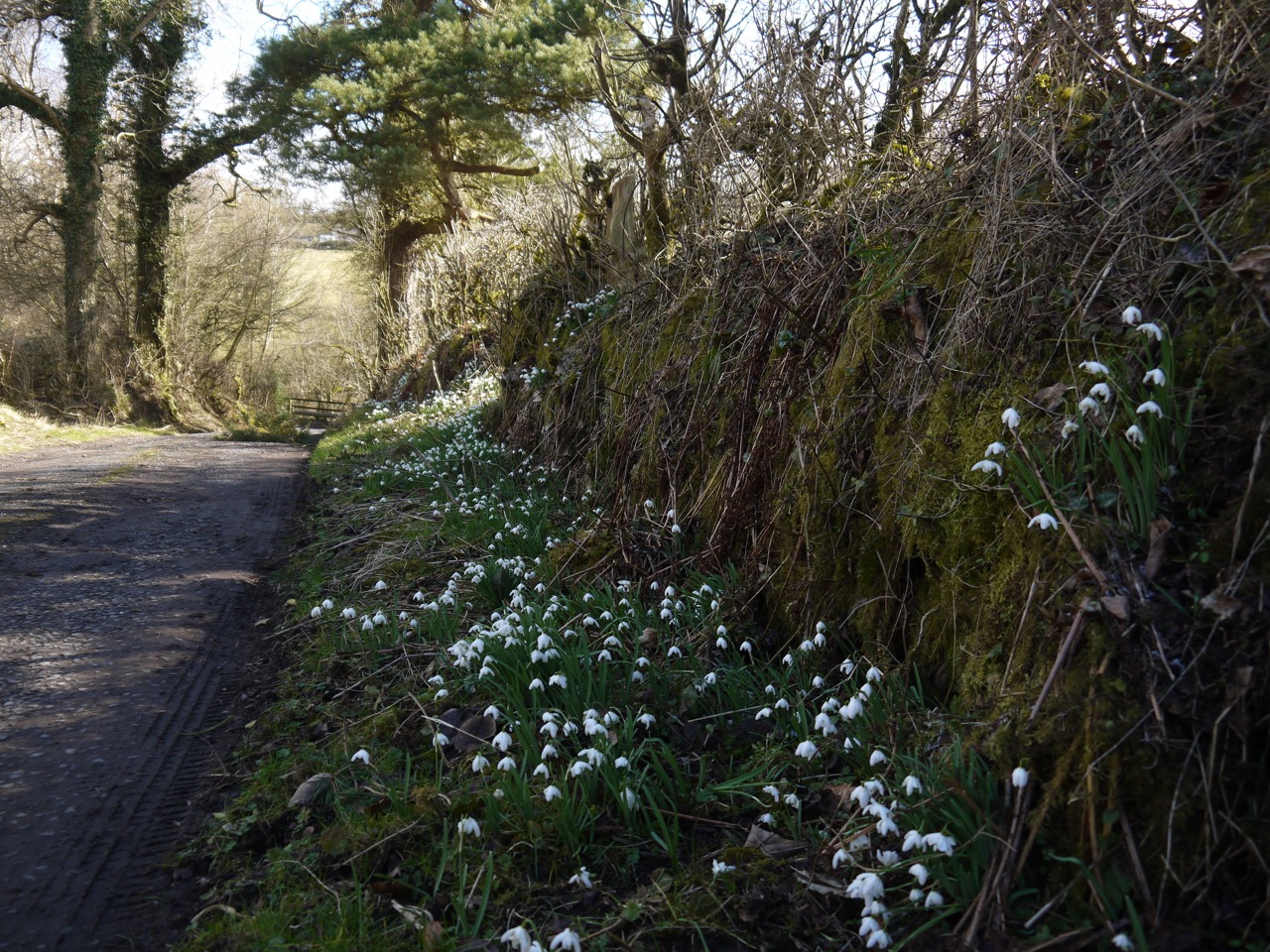