Hadrian’s Coastal Route 5: What spires, what blooms are those? 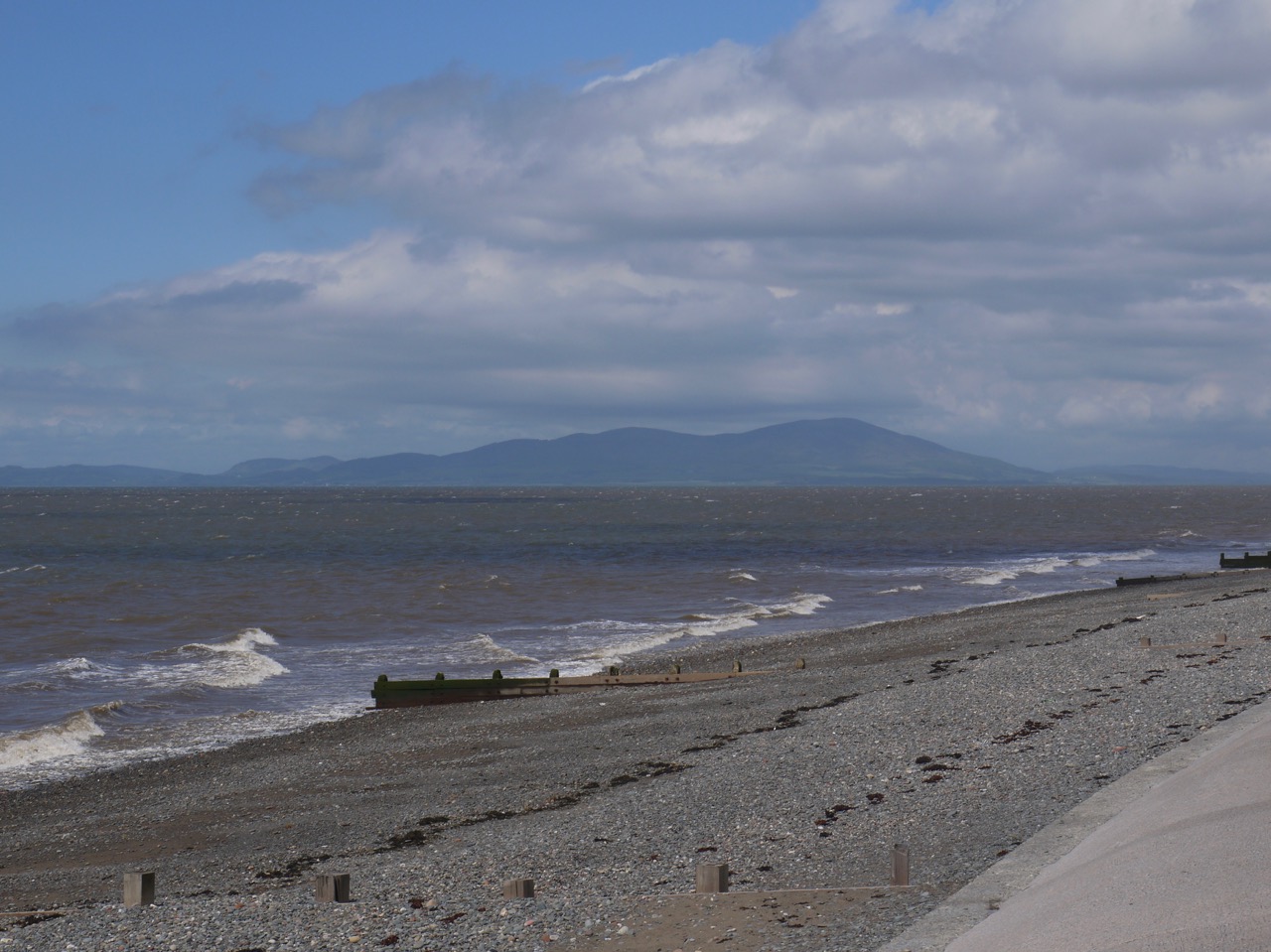 The was a real coastal walk – sand, shingle and marram grass. The wind was just enough to lift the dog’s ears as he raised his nose to sample the wafting scents but the raindrops it had blown onto the windscreen as we arrived were the last we saw. Across the water Criffel was peeping out beneath the clouds readying itself to be our companion for the day.

We had parked where our last section ended just beyond Maryport golf course. Traffic on the B5300 held us up but eventually thinned enough for us  to cross to the cycleway. Here the hedgerows were thick enough to allow the dog to run loose while we admired the flowers, identifying some and photographing others for later identification. Shouts ahead warned us of approaching cyclists. Who it would appear demand right of way. They were on a sponsored cycle ride for Prostate Cancer. I worried that we might be spending the rest of the day sharing our route, or more accurately stepping into the hedgerows for them to pass, but I need not have worried. 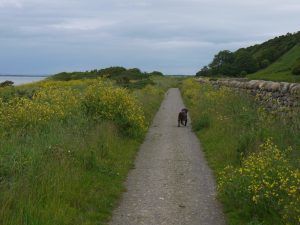 Milecastle on the right, saltpans on the left

Milecastle 21, a remnant of the Roman fortifications, is nearby and roadsigns proclaimed its presence while asking for careful driving. But I don’t think the milecastle is in any danger from passing cars, however dangerously they are driven. The site itself, sits atop Swarthy Hill. The car parking area shown on older photographs, including that beside the road, and  the way up to the site are now not just overgrown but lost to the undergrowth completely. This seems to have been a deliberate inaction presumably aimed at protecting the site. I didn’t fancy forcing my way through the jungle of greenery up to the fort so we turned our attention to the Saltpans across the road. These are rather like oversized sheep pens and date from about 1650 but salt had been collected here for nearly 700 years. Looking back across the road to the dark slopes it was clear how Swarthy Hill got its name.

From the saltpans a tempting path of trodden grass beckoned and led us along it until I had to admit that it had petered out once the dog was no longer visible. We couldn’t continue that way so we cut our losses, climbed through the undergrowth and dodged the speeding cars back across to the cycleway. 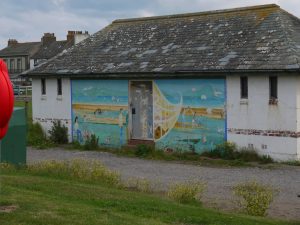 The path crosses the road a little short of Allonby, just after a footbridge, but here our road-crossing was aided by a steward helping the cyclists cross safely. An information board in Allonby told us that the imposing building we saw as we came into the village was the Quaker Reading Room (built in 1862). We were told that the village has been involved in salt making, smuggling, shipbreaking, weaving, horse riding and fishing, but today it was busy with families enjoying a day out. There were plenty of free picnic tables so we stopped for a slightly late elevenses. Signs warned “No BBQs on the Benches -Thank You.” and since they were so polite I was happy to comply. We saw ice-creams being consumed, but decided not to follow suit so early in the day. 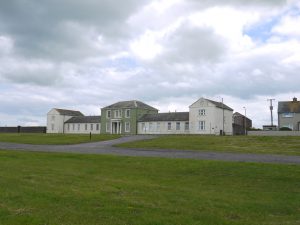 The path out of Allonby, crosses Allonby Beck on a footbridge then heads onto the grass beside the shore. North Lodge, stands here looking a little worse for wear. It was built in the 1830s by Thomas Richardson, a banker who had married a local girl. The central pavilion was a holiday home for the Richardsons and either side, were six cottages for local widows and spinsters who lived there rent free and received £5 per year from an endowment fund provided by Richardson. Either convenient or improper depending on how your mind works, I suppose.

An information board told us of a visit to the village by Charles Dickens and Wilkie Collins in 1857. This was during their walking tour of the north-west of England described in “The Lazy Tour of Two Apprentices“.

And I found it interesting, raised as I was in the Venice of the North, that the Reading Room’s designer Alfred Waterhouse was also responsible for Manchester Town Hall and Strangeways prison. (and the Natural History Museum in London).

Allonby was not always the sleepy village it is now and some of its life is captured in the poem below, “Allonby – sixty years ago” written by Joseph Heskett, the village’s shoemaker in the early 1900s. 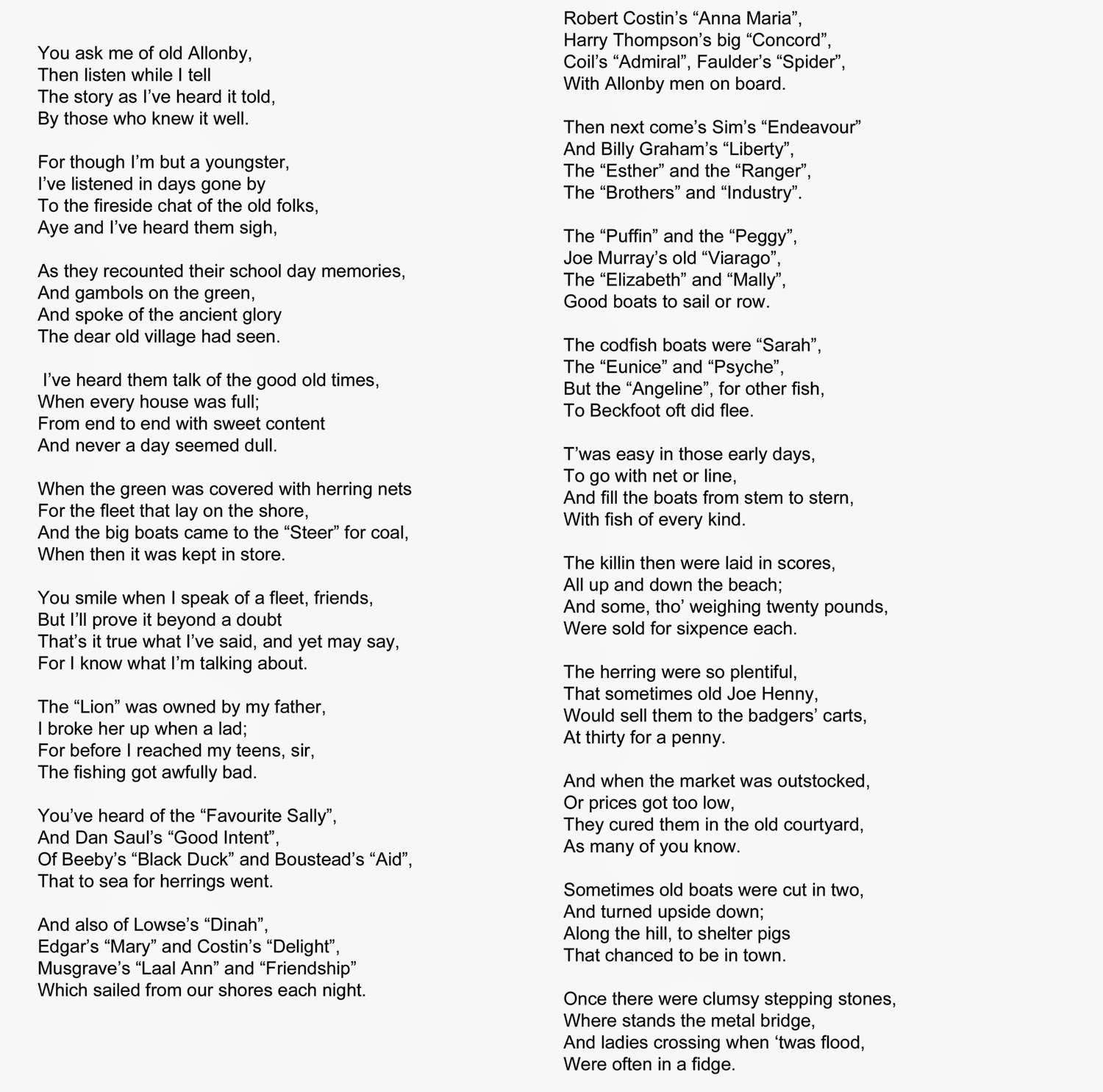 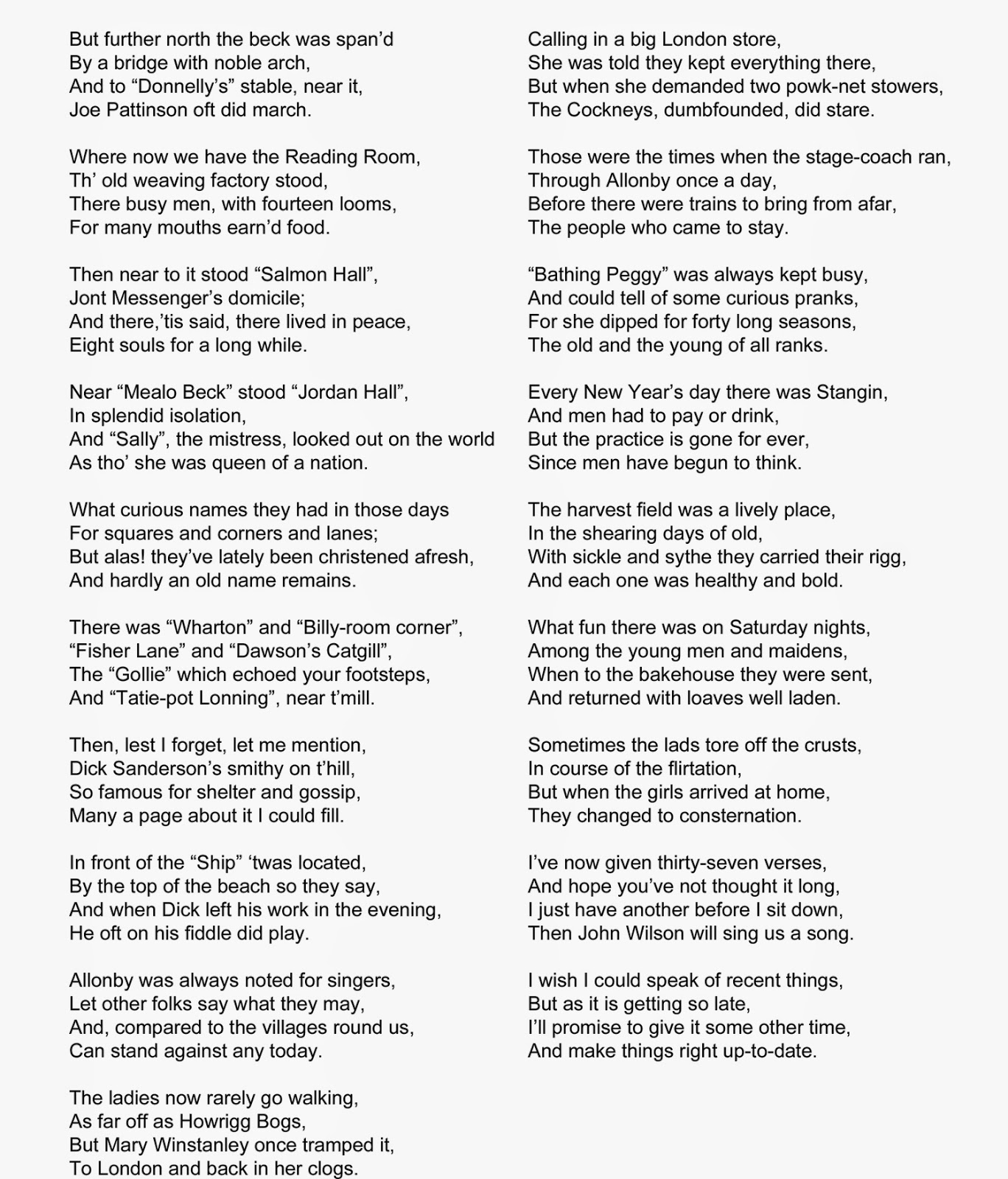 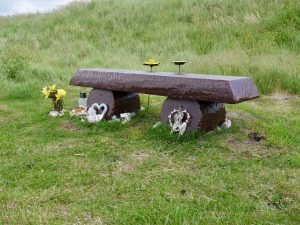 On the grass beyond Allonby we had clear views ahead and could see buildings and a spire on the horizon. Silloth. We had parked beside Christ Church in Silloth, so that was our destination. But, I wondered, was that spire I could now see Christ Church? I could not remember if the church we parked beside had a spire, nor could Audrey. We will have to solemnly surrender our “being observant” badges.

At Dubmill Point the road and the beach converged squeezing out the grass we walked along. We moved on to the beach but then the beach itself shrank away and we took to the concrete sea defences. These were not designed for walking, except perhaps for haggis, being at a bit of an angle. Then even the way on the concrete was denied to us, blocked by various diggers and fences. 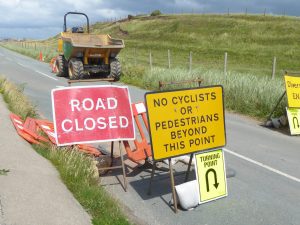 The road was closed to both vehicles and pedestrians but we decided to press on along the road, eyeing the workmen warily ready to be told to go back. But we stayed away from active work or vehicles and since the road beyond was closed as well, there was no traffic to dodge. Once we reached Mawbray we were able to get back to the shore and a path through the dunes

Luckily for us we came upon a convenient concrete ruin, perhaps an old wartime pillbox, that gave us somewhere to sit lunch. This was close to Stinking Crag but we neither saw nor smelt it. 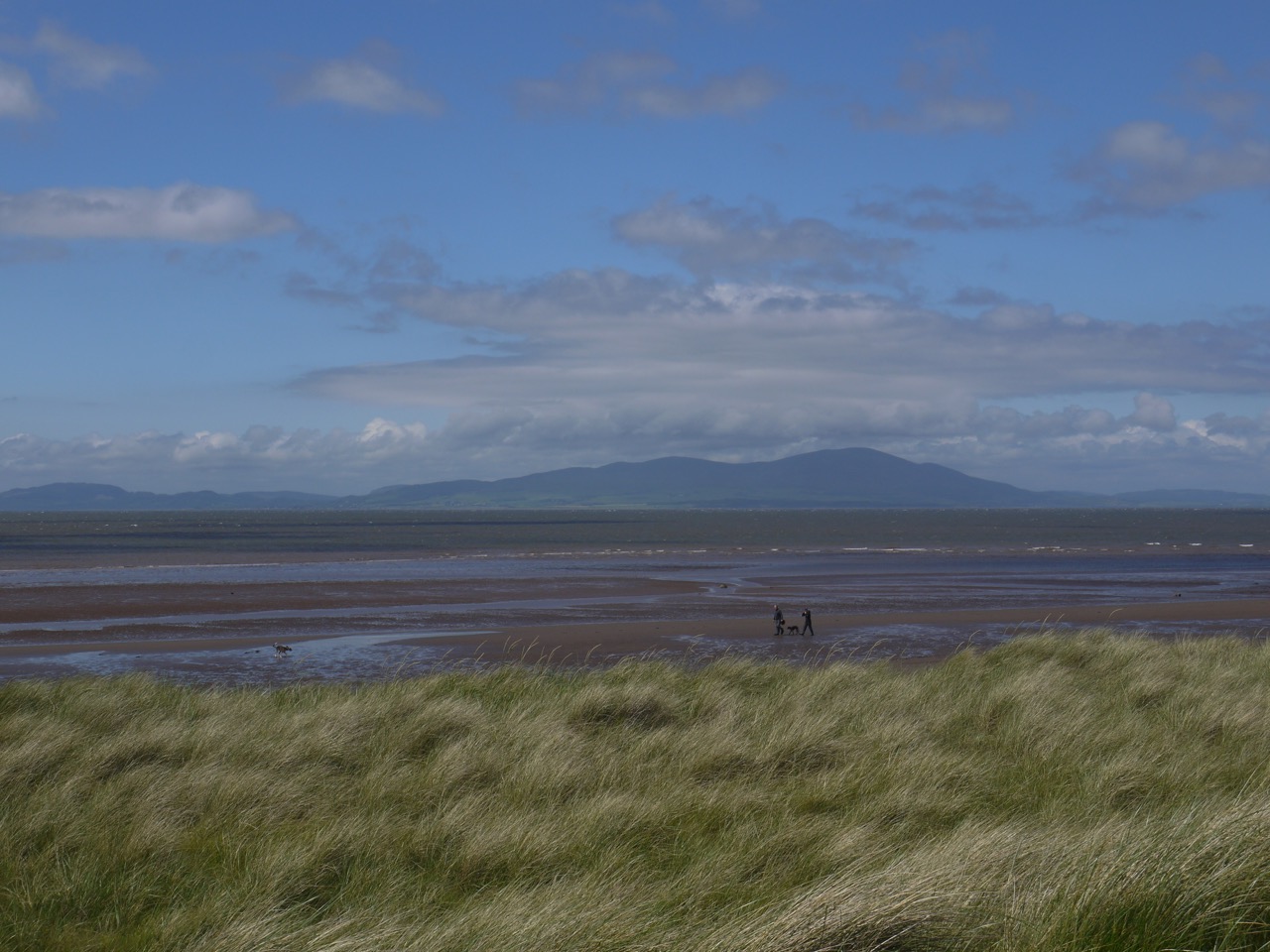 After lunch we continued along the dunes, then on a cliff of sorts, before running out of path again. We had to choose between  the road (an open section) or the beach. The latter involved retracing our steps a little way but seemed the safer option. (I had checked the tides before setting off).

The beach was not hard going, but I would have to say that neither was it particularly easy going. I found myself wandering up and down the beach looking for the firmest footing. A stream was our only obstacle but it narrowed enough for us to leap across at Beckfoot. Well Audrey and I leapt. Christy jumped in. 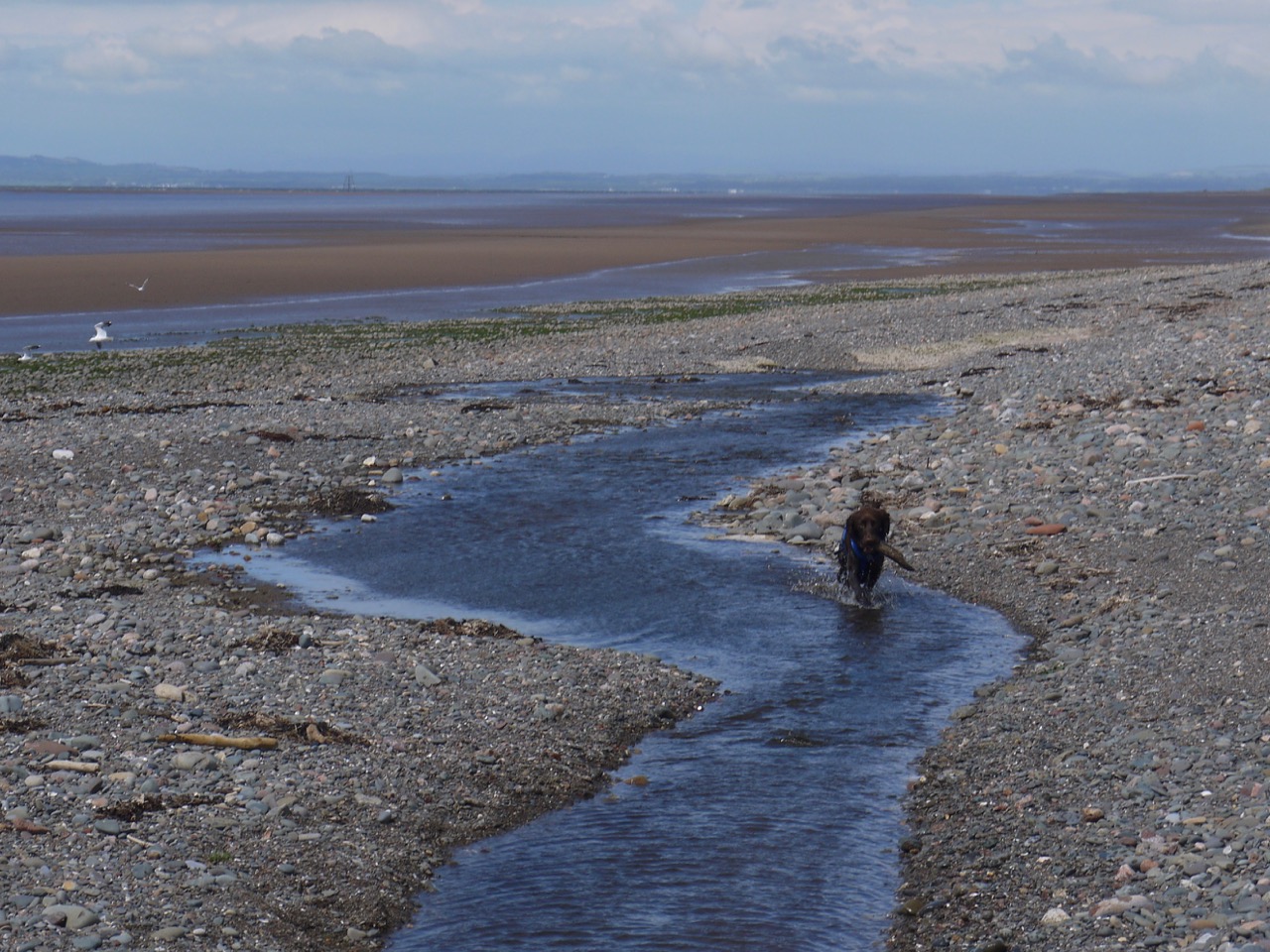 We were able to get back onto the dunes and had a couple of miles walking through marram grass, Christy carrying and dropping his stick, us looking at flowers and driftwood while wondering how far it was to Silloth.

In 1855, John Ostle, a local farmer, wrote in his journal: “Silloth Bay is a very wild place in dry and windy weather. The sand blows very little short of the deserts of Arabia. There is now at present four farm houses, that is all there is at Silloth”. But soon after this Silloth was developed as a port and sea-side resort to rival Scarborough as a watering-place for the upper classes. Beechings cuts however did not do it any favours. It did not fare so well when the railway closed. 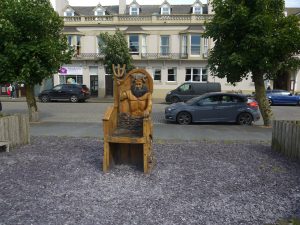 We entered Silloth at the harbour and walked down beside the flour mill that can not be said to add a positive aesthetic to the town. Once in the town itself we sat in the Silloth Green Community Garden on seats beneath the Rotary Oak (not a rotary oak, though the difference is subtle). We savoured our ice-creams, wondering why the Neptune storyteller’s chair and Wishing Well were there.

And does Christ Church Silloth, where we were parked, have a spire? I’ll leave it to you to answer that.

Or is it a steeple?

© OpenStreetMap contributors
Share this...
This entry was posted in Cumbria and tagged Hadrian's Coastal Route. Bookmark the permalink.