Cumbria Way: Pimp – the glyndwr of terra and the cold river 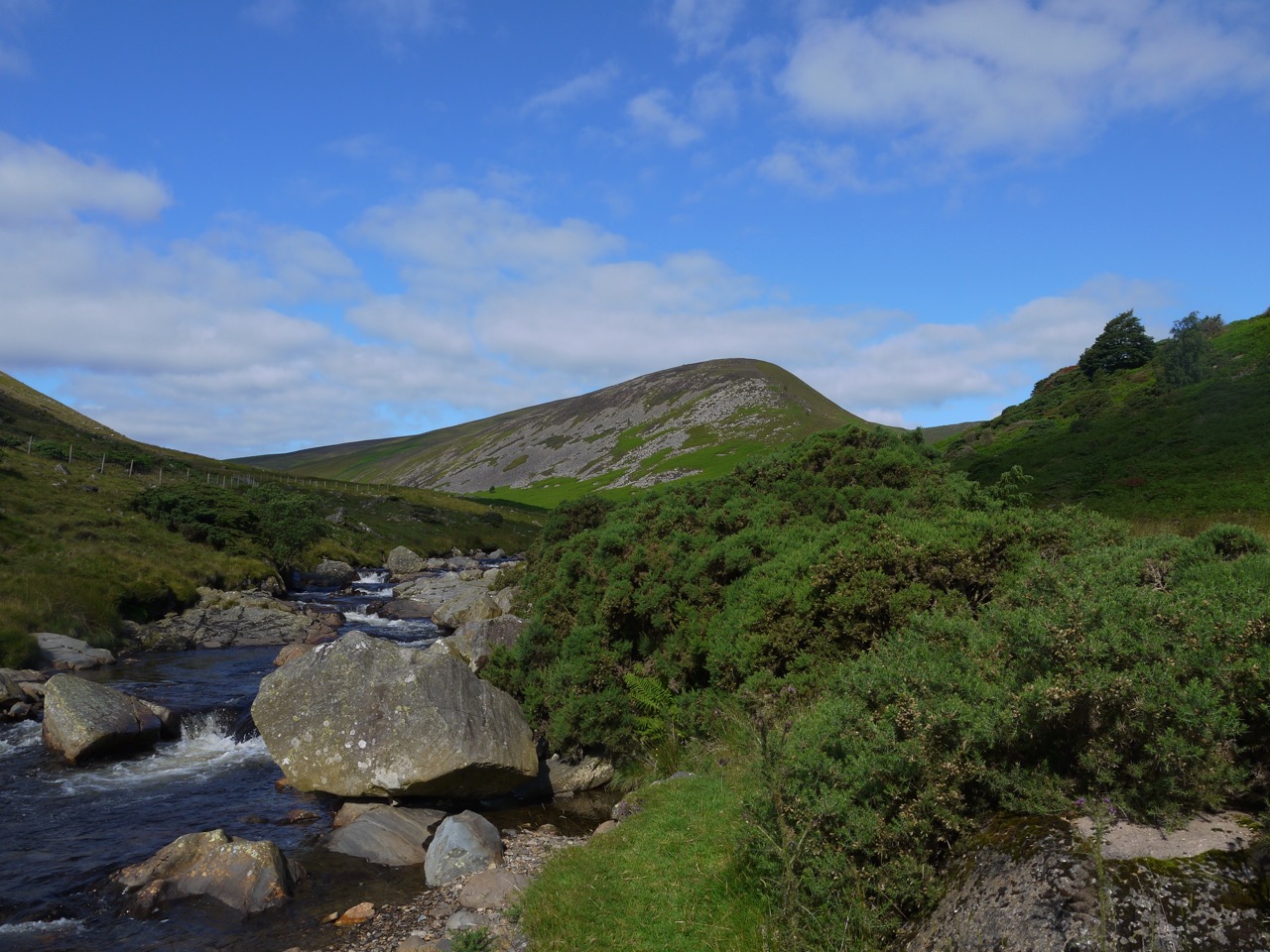 This was the first section where we used two cars, leaving one in Keswick and the other close to the Cumbria Way near Mosedale. The weather was forecast as sunny spells but reality gave us sunshine throughout the walk.

There are several distinct terrrains in this walk: the town of Keswick itself, woodland paths up towards the higher grassland of Latrigg, exposed paths across the rocky slopes of Glenderaterra,  heather clad moorland surrounding Skiddaw House and, finally, bracken covered rocky slopes between Knott and Bowscale Fell.

In Keswick we read the inscriptions describing the PUPs clock, purchased by the pushing young peoples society (PUPs) in 1932, and a strange monument dedicated to Peter Crosthwaite 1735-1808. The latter looks like a collection of pipes but I haven’t been able to find out what is is meant to be. The town was very busy with a market filling the main street but we soon left the crowds after turning left at the Moot Hall. This took us down past the war memorial and Fitz Park. My map suggested the Cumbria Way went through the grounds of a hotel here but a sign directed us along a path beside a leisure centre.

Another sign indicated some wooden steps to an area that on my map is a field but is now a housing estate. It was unclear whether we were to walk around or through this, so we guessed at walking around on the basis that there was a footpath. This led us parallel to, and then on to Brundleholme Road for a short distance before turning onto Spoonygreen Lane.

This lane took us over the A66, past Spooney Green farm and climbed up through Ewe How Wood. A gate here had a side hole for hens. We had hedgerows to examine (loosestrife, foxgloves, woundwort) as we climbed, and gradually improving views of Skiddaw, Bassenthwaite and Grasmoor. 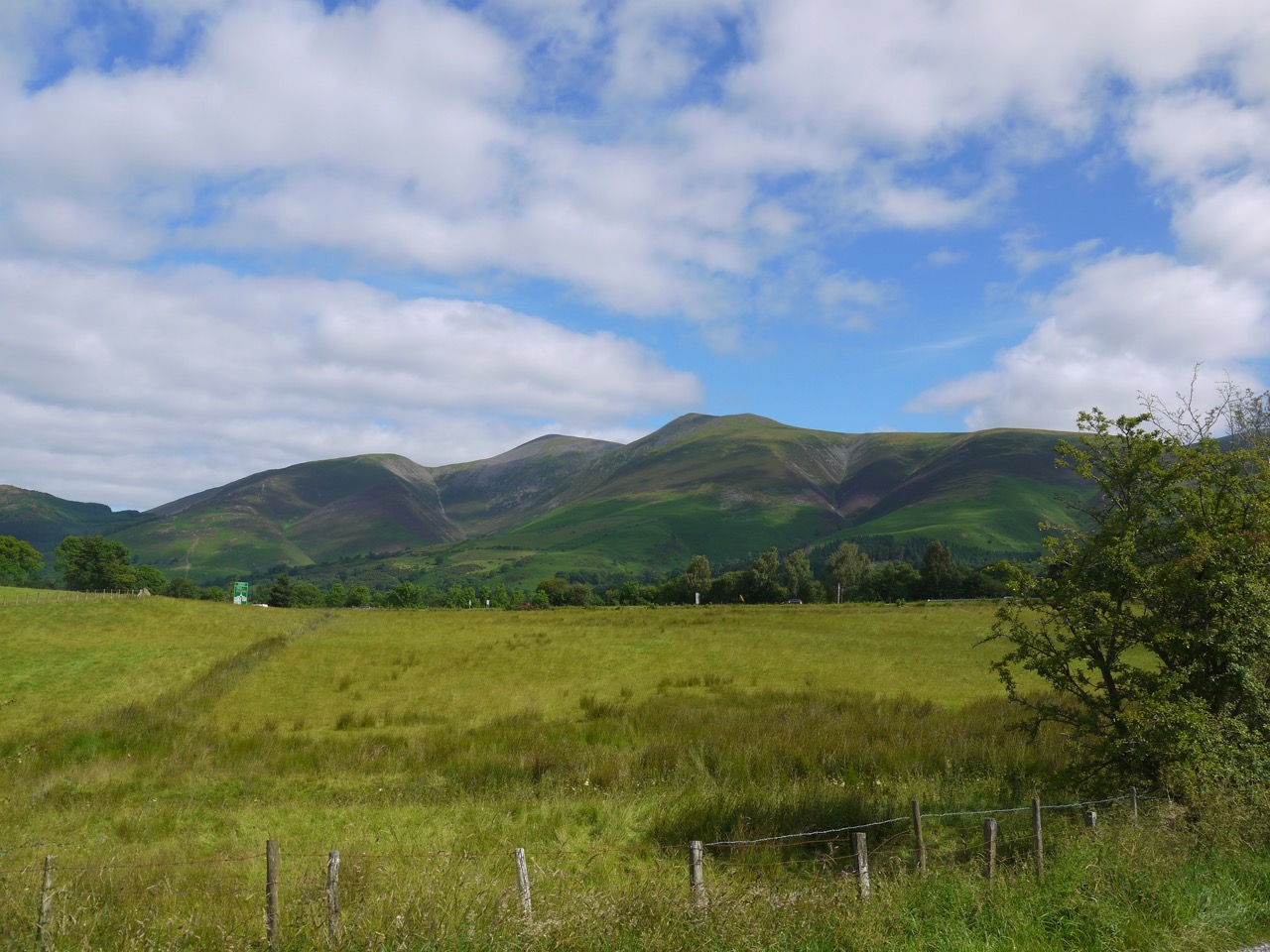 The track took us around Latrigg, through the carpark for Skiddaw and onto the grass covered slopes of Lonscale Fell. A shepherd and his collie were moving a flock of sheep and the shepherd actually shouted “come by”. A sign of the times though was that once the sheep had been moved, the dog jumped onto the quad bike and he and the shepherd drove off.

We followed the Skiddaw path as far as the Shepherd’s Monument. This is a memorial to members of the Hawell family and is inscribed:

It was then back to the Cumbria Way to ford Whit Beck and continue our slow climb across the southern slope of Lonscale Fell. This section is best walked in good visibility for the views which stretch from the Hellellyn group of hills to the Bassenthwaite Fells. I could see all along Borrowdale to Castle Crag. 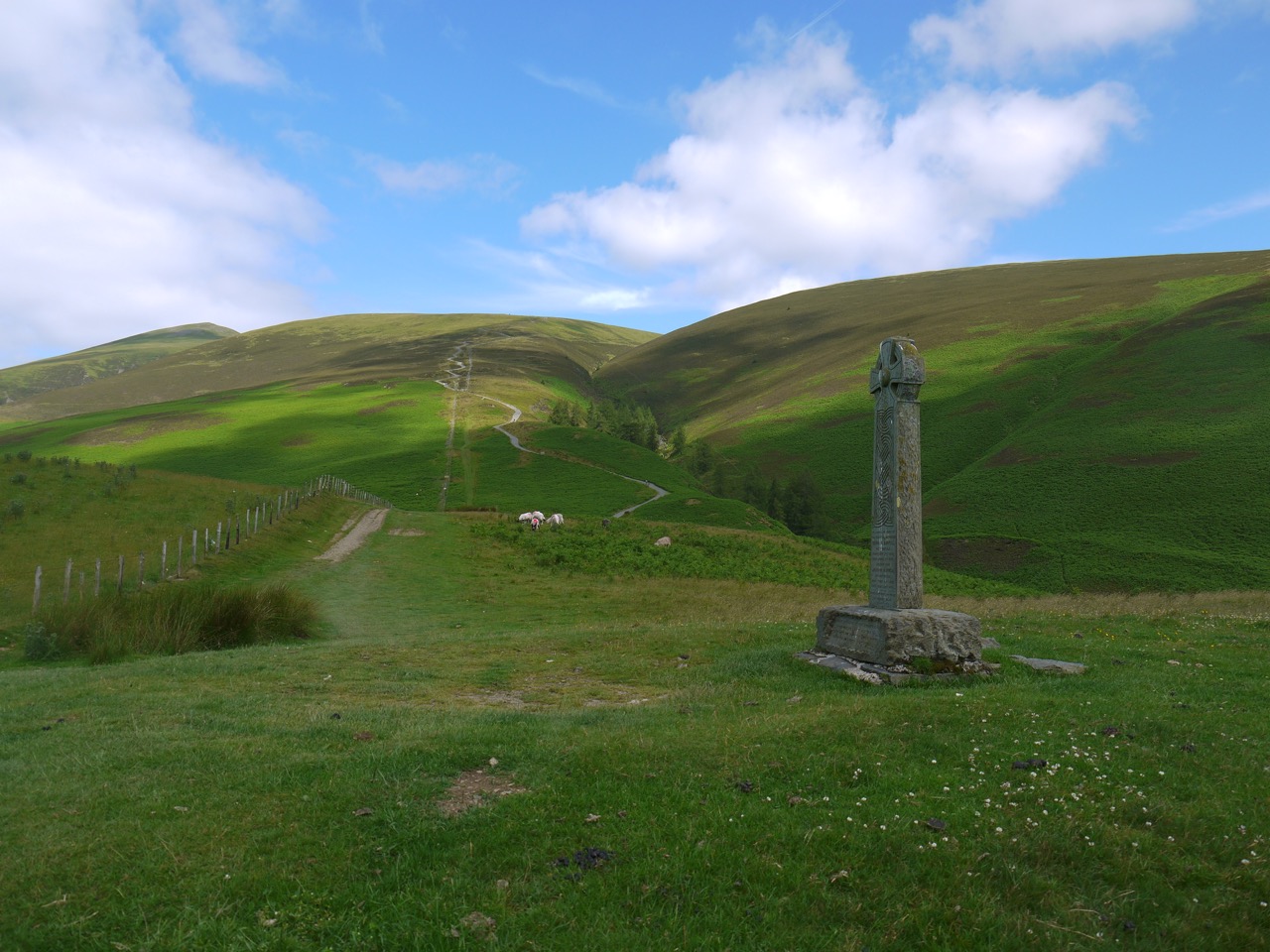 Bright green bracken covered the hillside until we turned into the Glenderaterra valley with its rocky heather covered slopes. The Glendera- of this name derives from the Brythonic glyndwfr meaning river valley, but I haven’t been able to find the etymology of -terra. It seems unlikely to be the Latin terra and the most plausible source I can find suggests the suffix is an obscure personal name.

We stopped at a convenient rocky outcrop for a rest, the sun and breeze working together to keep us comfortable. The valley lies between Skiddaw and Blencathra, and the gentle green slopes here reminded me (and Audrey) of the hills of the Southern Upland Way, especially those of the Ettrick Valley.

Our route would continue to climb all the way to Skiddaw House. The path was well frequented by mountain bikers so we found ourselves stepping off the path to let them by several times. One poor biker was carrying his bike up a steeper section. The flora changed from bracken to heather as we climbed. 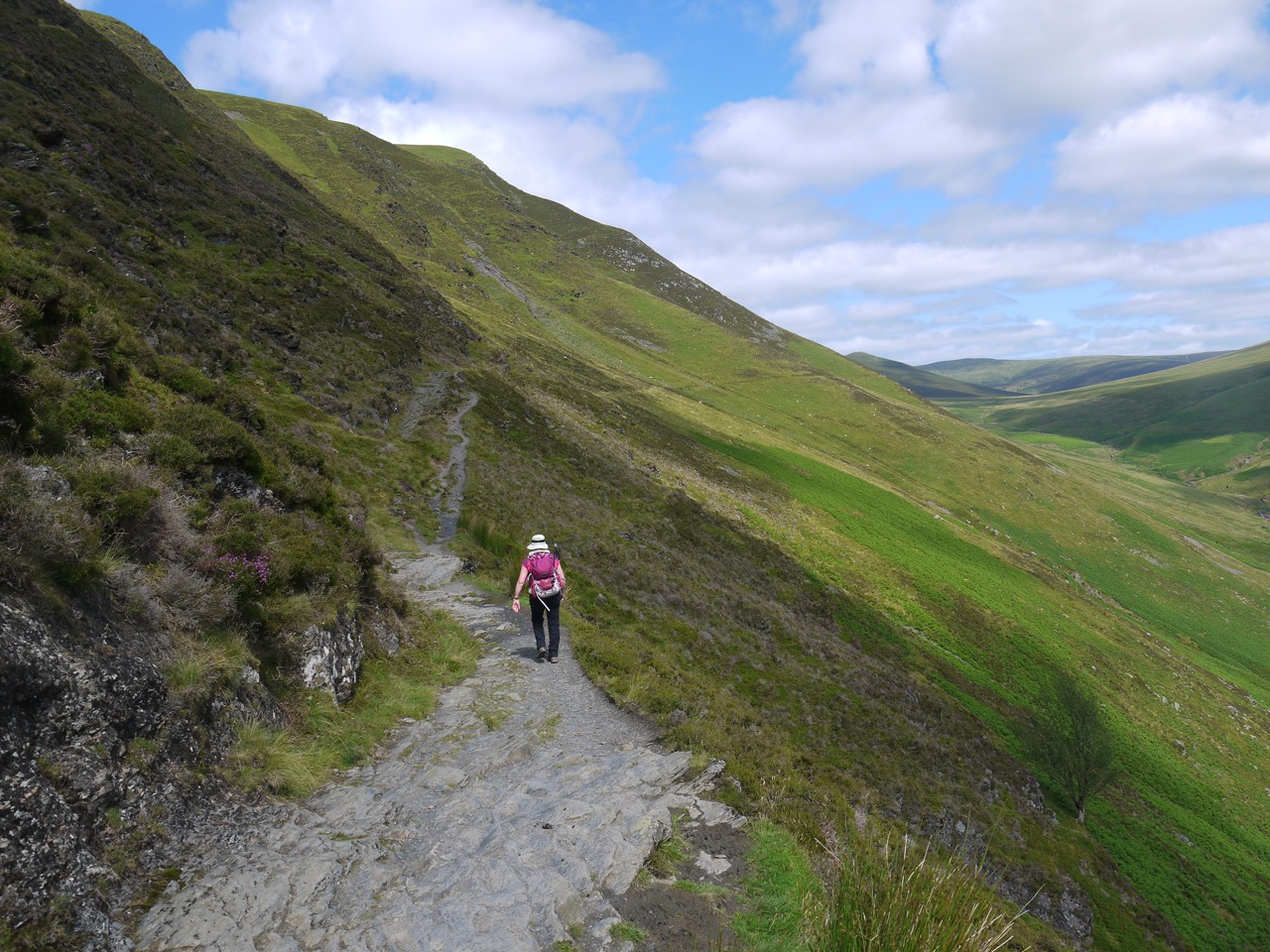 The local watershed is at a finger of Lonscale Fell called Burnt Horse. and once over that we were in a rather desolate heather covered moorland watched over by Skiddaw House, which apparently is the loneliest house in England. Lonely perhaps, but welcoming. there was a box of flapjacks by the house and a note to leave £1.50 if you took one. I might have been tempted but we had just had lunch.

We had stopped beside Salehow Beck for lunch. An old sheepfold here had enough scattered rocks at the right height for seats and we were sheltered by the higher bank of the stream.

After Skiddaw House it was all downhill (well, mostly downhill). We walked across the barren moorland and then joined a track following the valley with the River Caldew at our side. The bell heather here was in bloom, but the ling hadn’t yet started to make much of an effort. There were also stands of blaeberry with fruit ripe for eating. I had one deliciously sweet berry but the rest were a bit tarty. 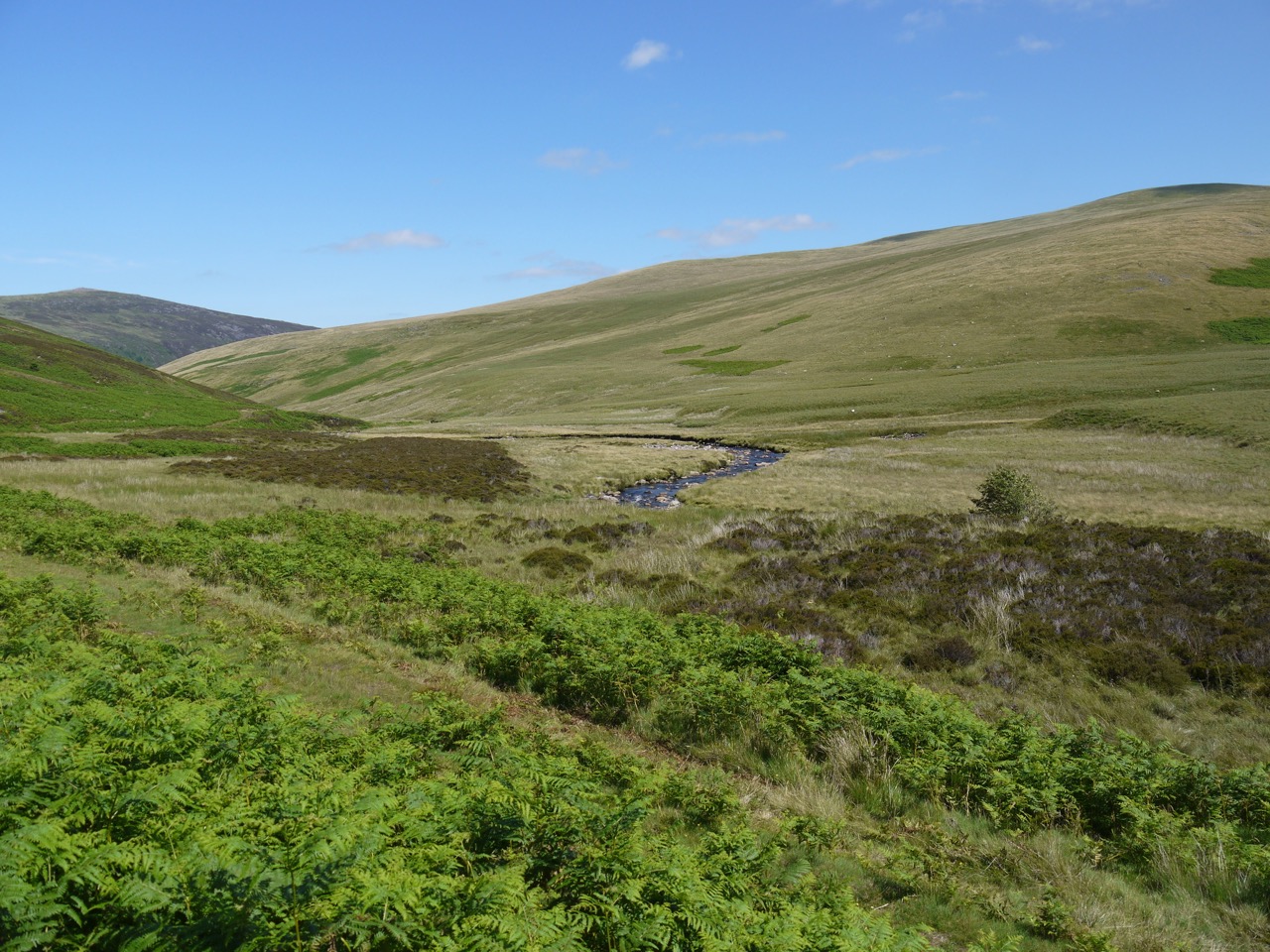 I had thought we would be walking back to the car in a deserted valley, and was looking forward to winding down in relative privacy, cooling my feet in the the river, and listening to the wind. But as we drew closer it became obvious that we would be sharing the end of our walk with a couple of dozen other people. But we took the time to rest our feet in the waters of the River Caldew, which was very cold indeed, but what should we expect of a river whose name means cold water.