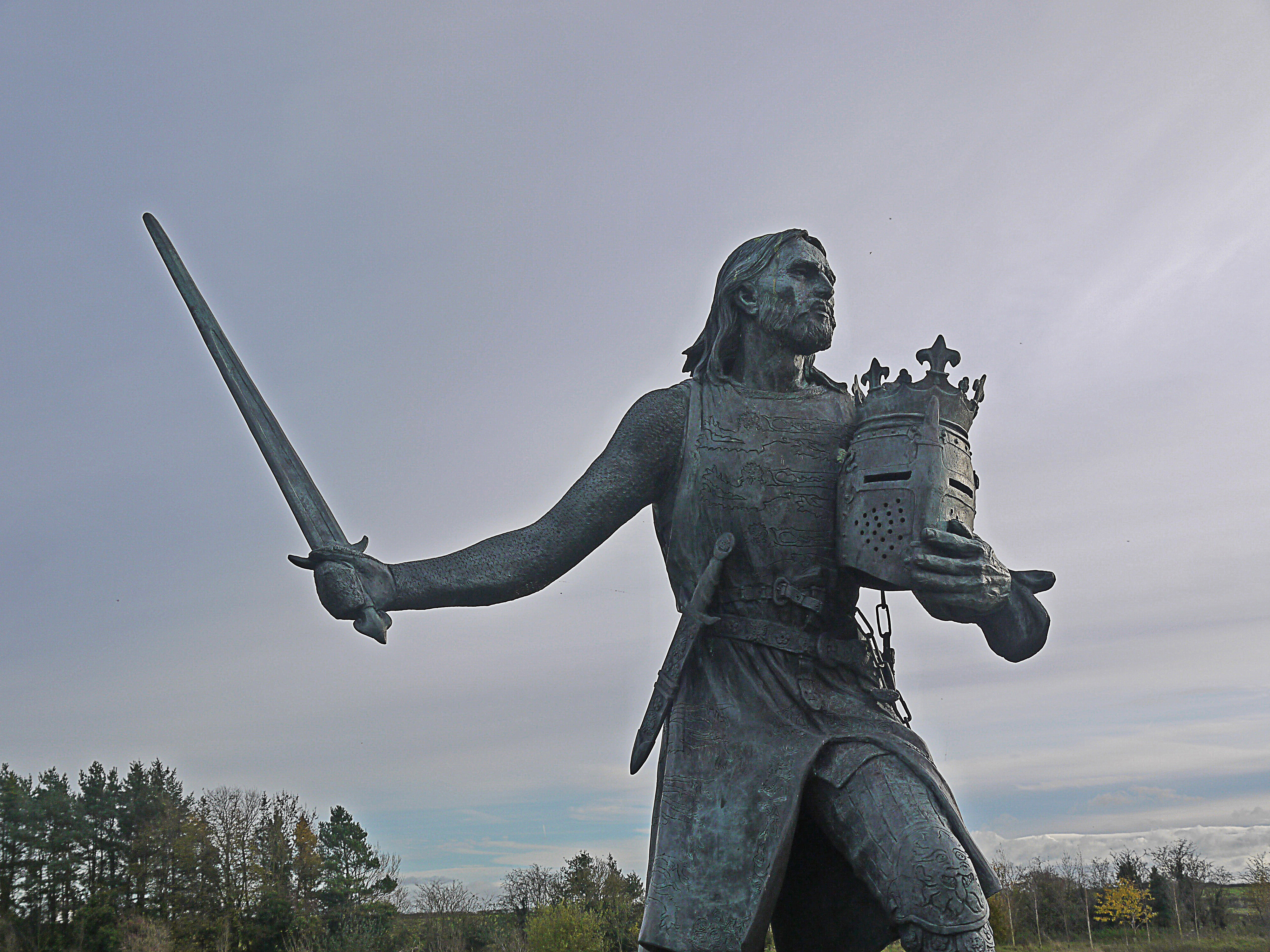 The first stage of our Hadrian’s Wall Path Walk was from Bowness-on-Solway to Burgh-by-Sands, mostly on minor roads through tidal marshland.

We parked at a small car park just beyond Bowness, by a road sign informing us it was 84 miles to Wallsend and 1150 miles to Rome. To the west we could see Criffel on the horizon beyond what remains of the Bowness-Annan railway. This viaduct was built in 1869 and wikipedia, rather charmingly, gives its length as 1 mile and 8 chains.

For those who have forgotten, or never knew, 10 chains make a furlong, 8 furlongs a mile, an acre is 10 square chains, and a chain is 4 rods, poles or perches. Surveyors would have used actual rods and chains of these specific lengths in bygone days and distances on railways are still called chainage, though now measured in metres. When I was at school we were using S.I. units though I recall learning about feet and inches as well as metres, pounds and ounces as well as grams but not the more arcane rods, poles, perches, bushels, pecks etc. but these still existed as lists in our books. The 1 mile and eight chain long viaduct closed in 1921 and was dismantled in 1935. 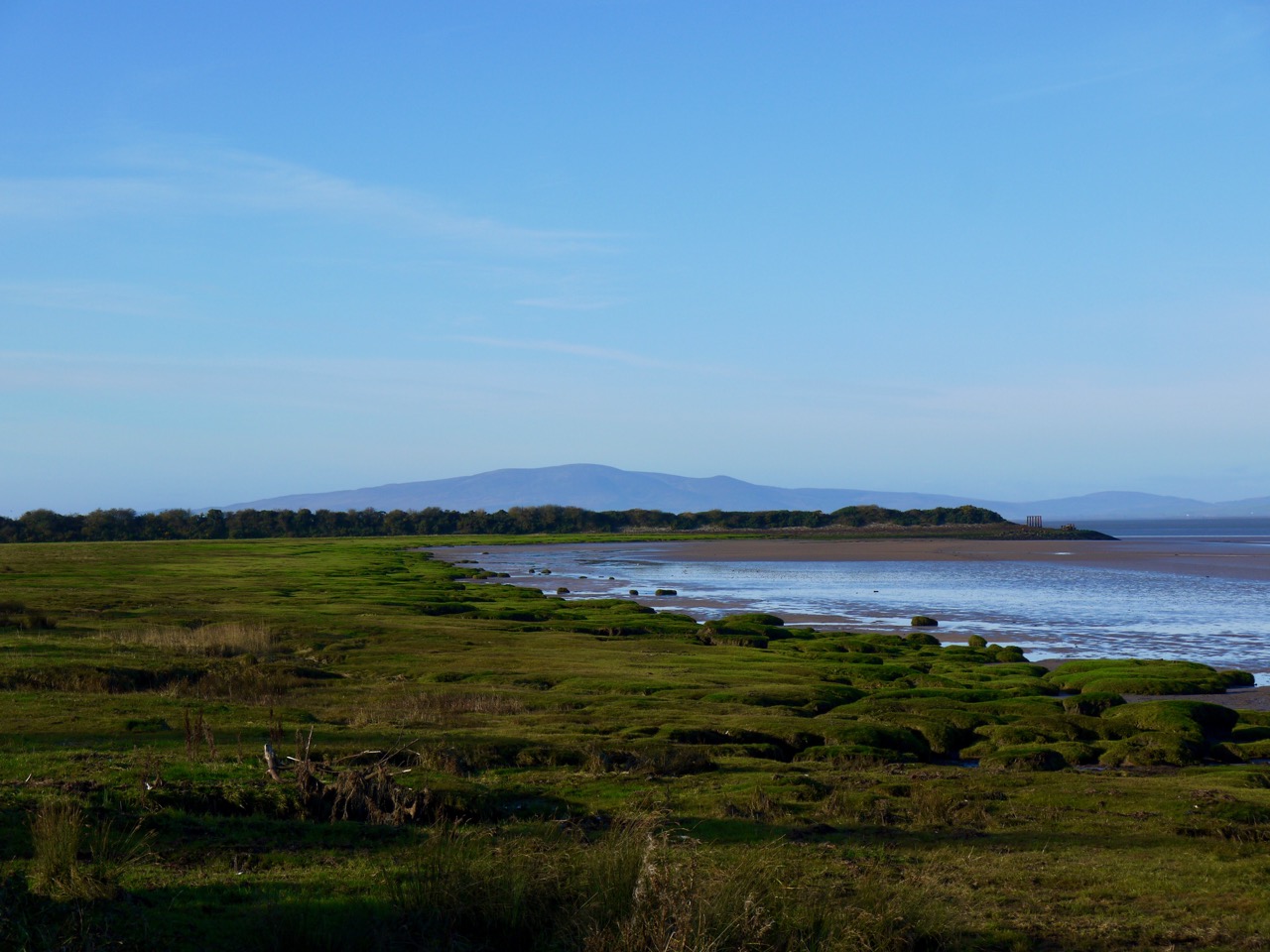 Criffel and the old railway from Bowness

Hadrian’s Wall ended at a large fort  at what is now Bowness, though several forts continued along the Cumbrian coast for a further 25 miles or so. The official start of the HW walk is in Bowness and marked by a shelter with information boards and a floor mosaic depicting seabirds. The threshold is inscribed “Ave Maia”, hail Maia, Maia being the name of the fort that stood at the western end of the Wall. (maia ≈ major). 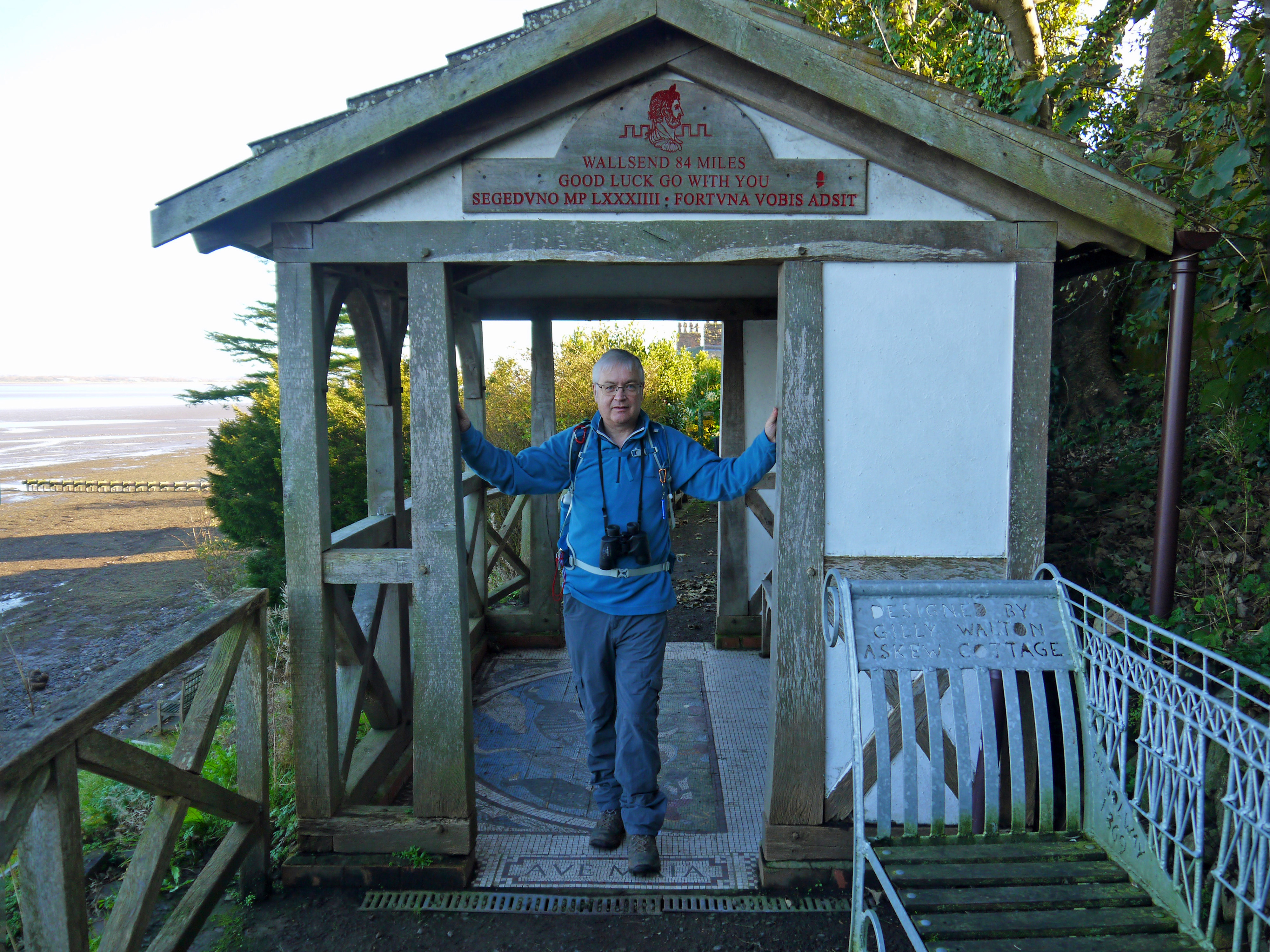 From the shelter the path took us back to the road and along to Port Carlisle, a mile or so away. Here, as later, we saw a variety of seabirds and spent some time looking across the Solway. The OS map has an “Altar stone” marked in the sands but I could not see it.

Port Carlisle was an interesting place. The path left the road taking us along what would once have been the quayside. A canal once ran from here to Carlisle. It opened in 1819, was initially very successful but closed due to financial problems in 1853. The port itself silted up rapidly after the Solway-Annan viaduct was built, which changed  the flows in the estuary. It is really strange to see what must once have been a sizable port now reclaimed by the sands. 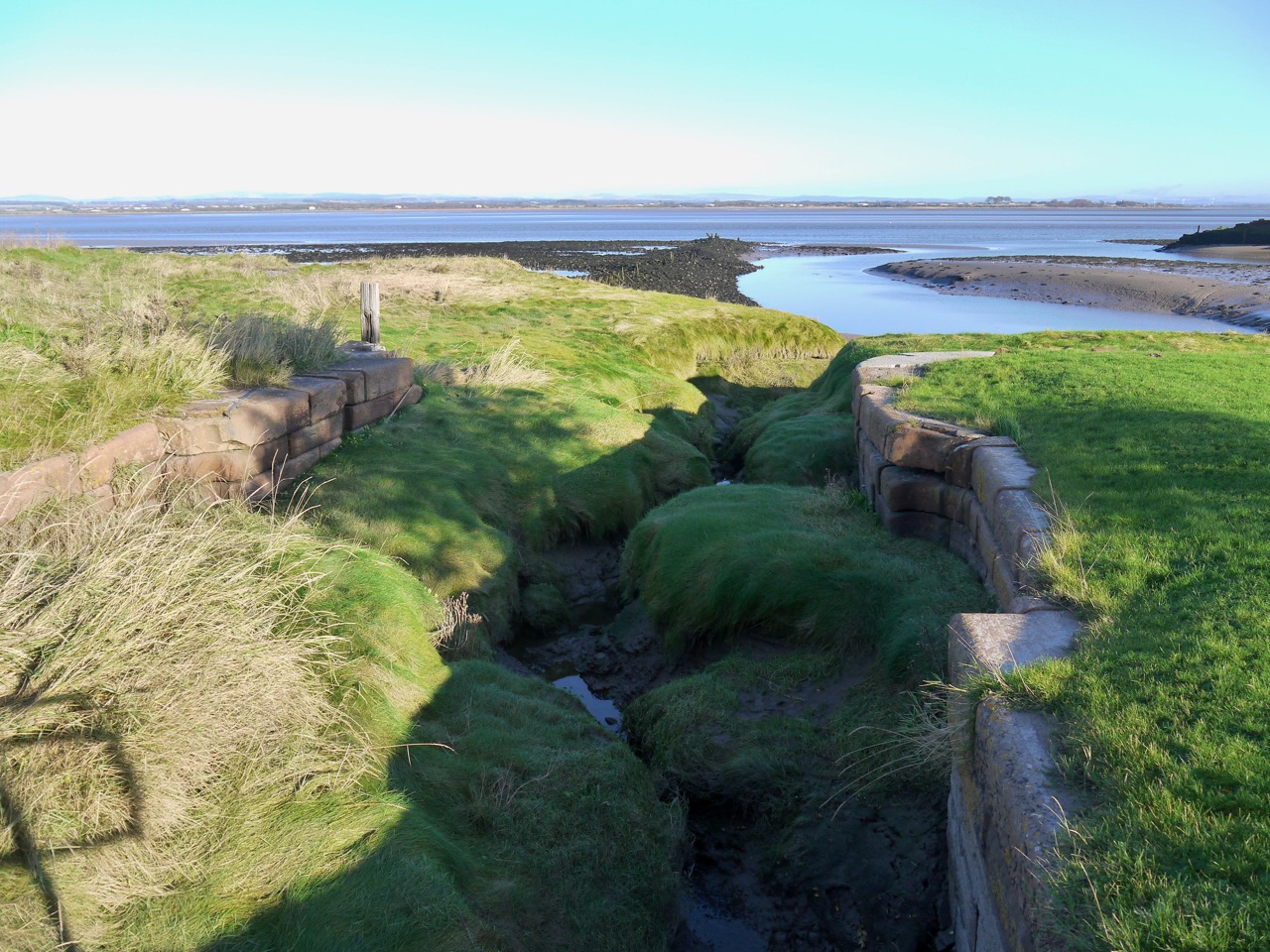 We then walked through gorse, then along a tree lined path beside green stagnant water in what must once have part of the canal. Then we were back on to the road. The villages along this stage stand on slightly higher ground and there are tidal marshes between. Were it not for the road, this would have been a very wet walk even at low tide. 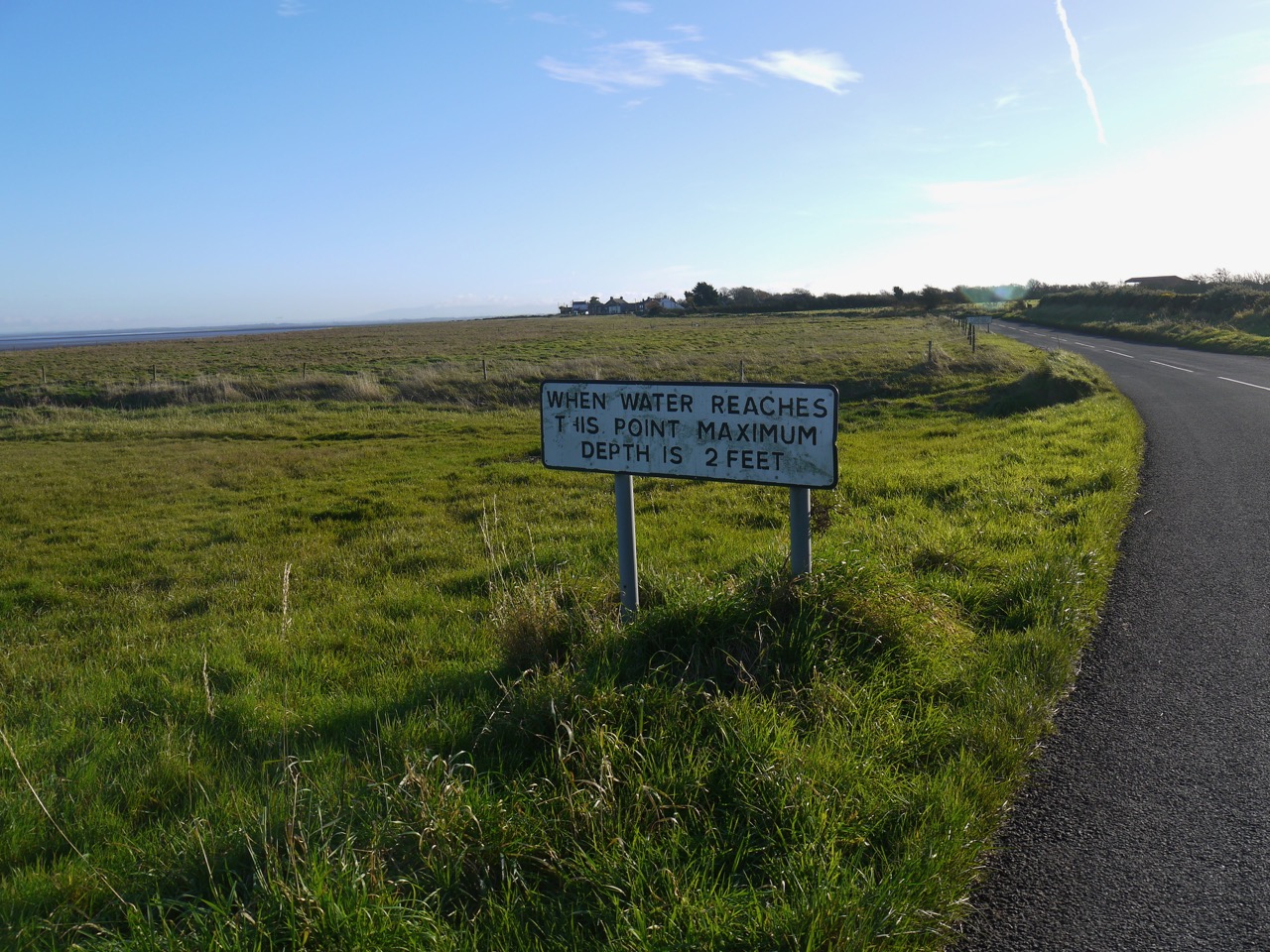 Why it’s important to check the tide times

Just in case we didn’t realise how wet the walk would be on the marshland, we did experience it briefly when we detoured off the road to a bench so we could take off a layer without putting our bags on the wet ground and found ourselves walking in a quagmire.

Glasson’s Highland Laddie Inn proclaimed itself “The Haafnetter’s Rest”, For those who don’t know what a haafnetter is, click here. 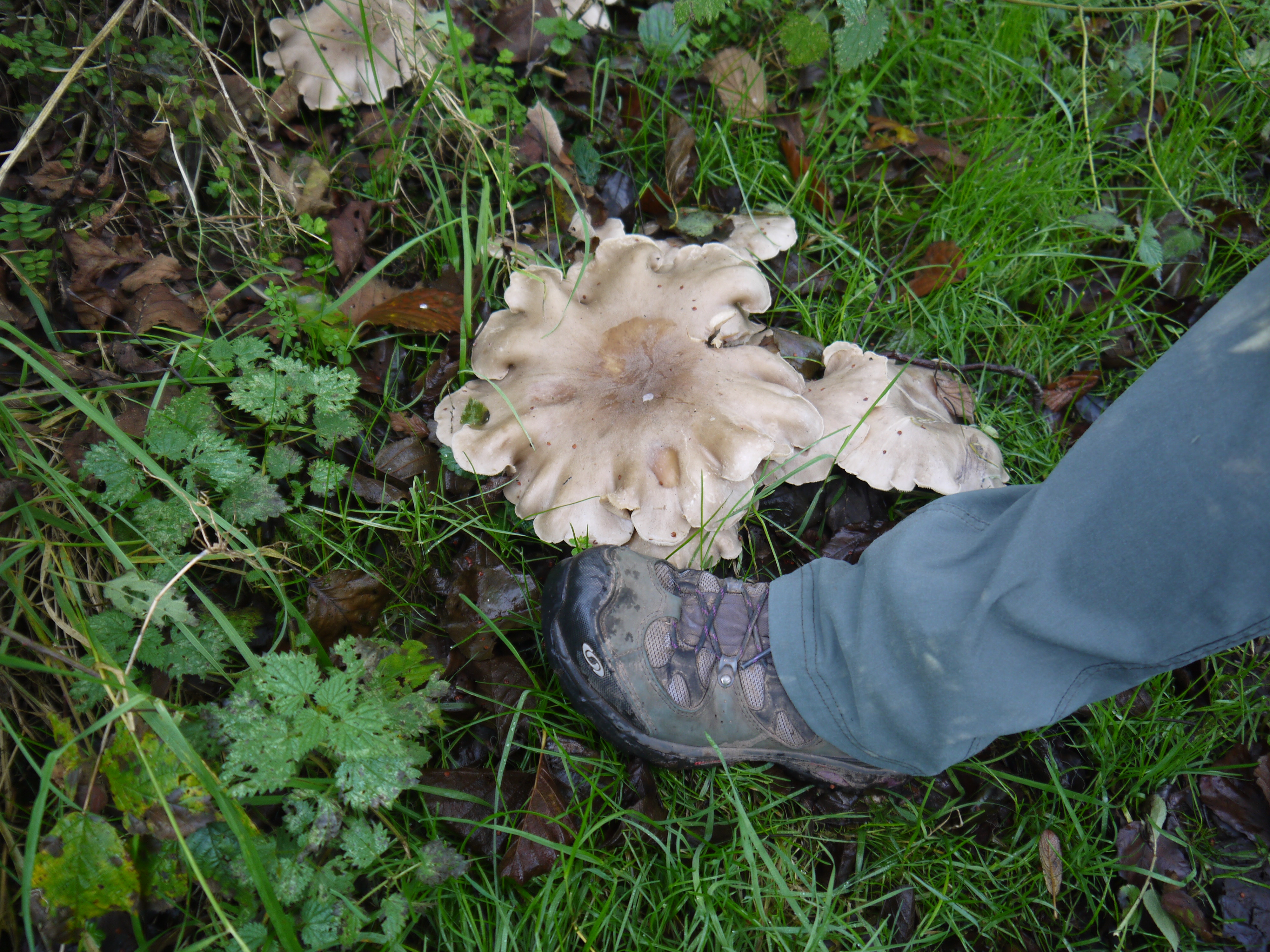 Audrey had by this time already commented that this walk wasn’t as muddy as the last. The Fates, as they must, took umbrage at this so we soon found ourselves trudging through the boggy fields between Glasson and Walker House where we picked up a farm track. During this walk we experienced what is to us the “Postman Pat Phenomenon”, this is the scenario when you are far from human habitation, haven’t seen another soul for hours, find a secluded spot for a pee and find you have pressed the invisible ‘attract strangers’ button. It is named for an event on the Annandale Way when a post office van came driving along an unseen road.

I was able to pretend I was looking closely at some brambles. Indeed in doing so I noticed there were some flowers even this late in the year. In fact there seemed to be some unseasonable flowers along the walk, including some welsh poppies. 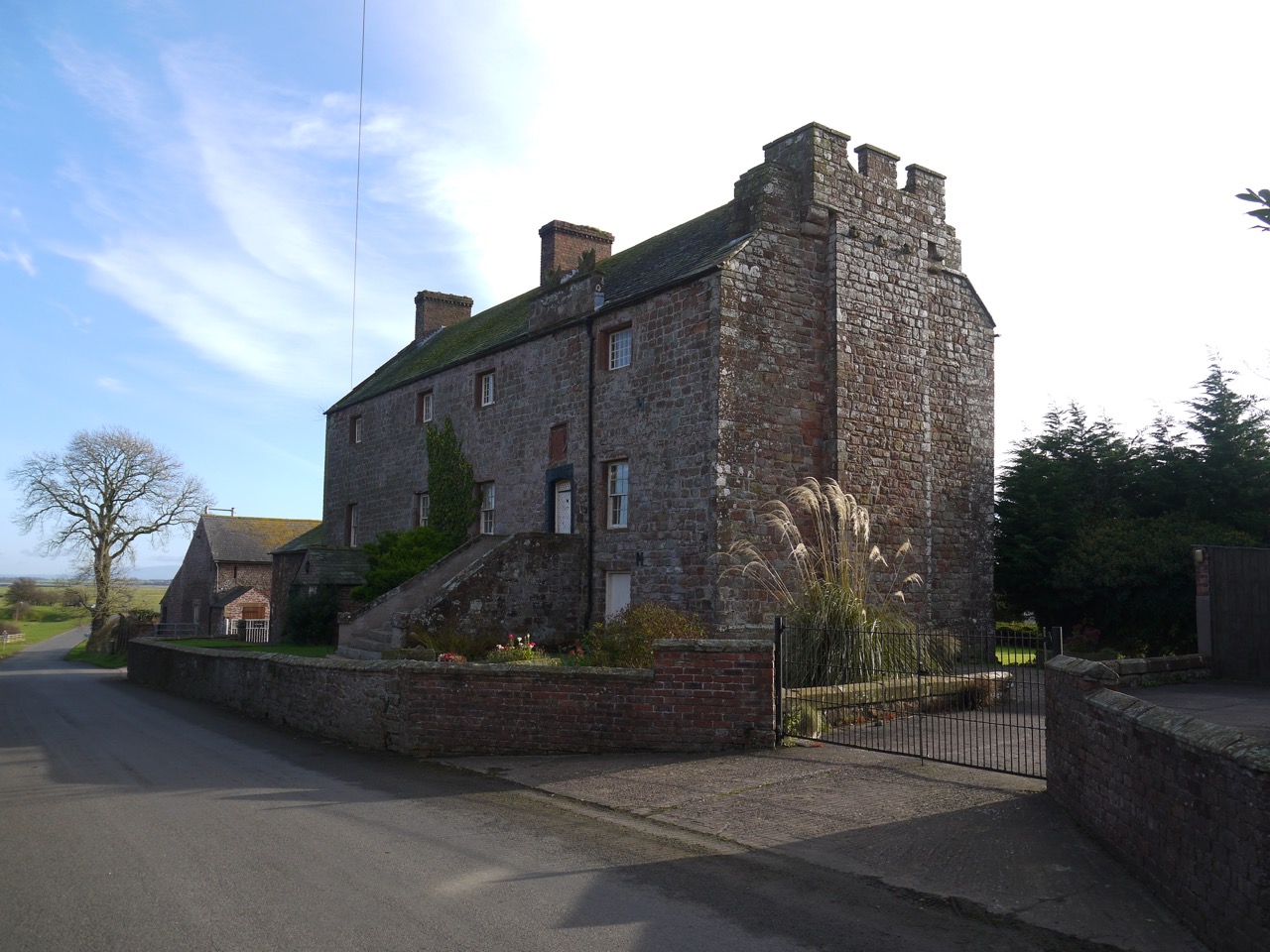 The farm track led us into Drumburgh. The fort of Coggabata, part of Hadrian’s Wall, once stood here to guard a ford across the Solway. Nothing now remains of the wall or fort here but the 14th century Drumburgh Castle, is said to be built of stones from the wall and has a Roman altar stone above its door. 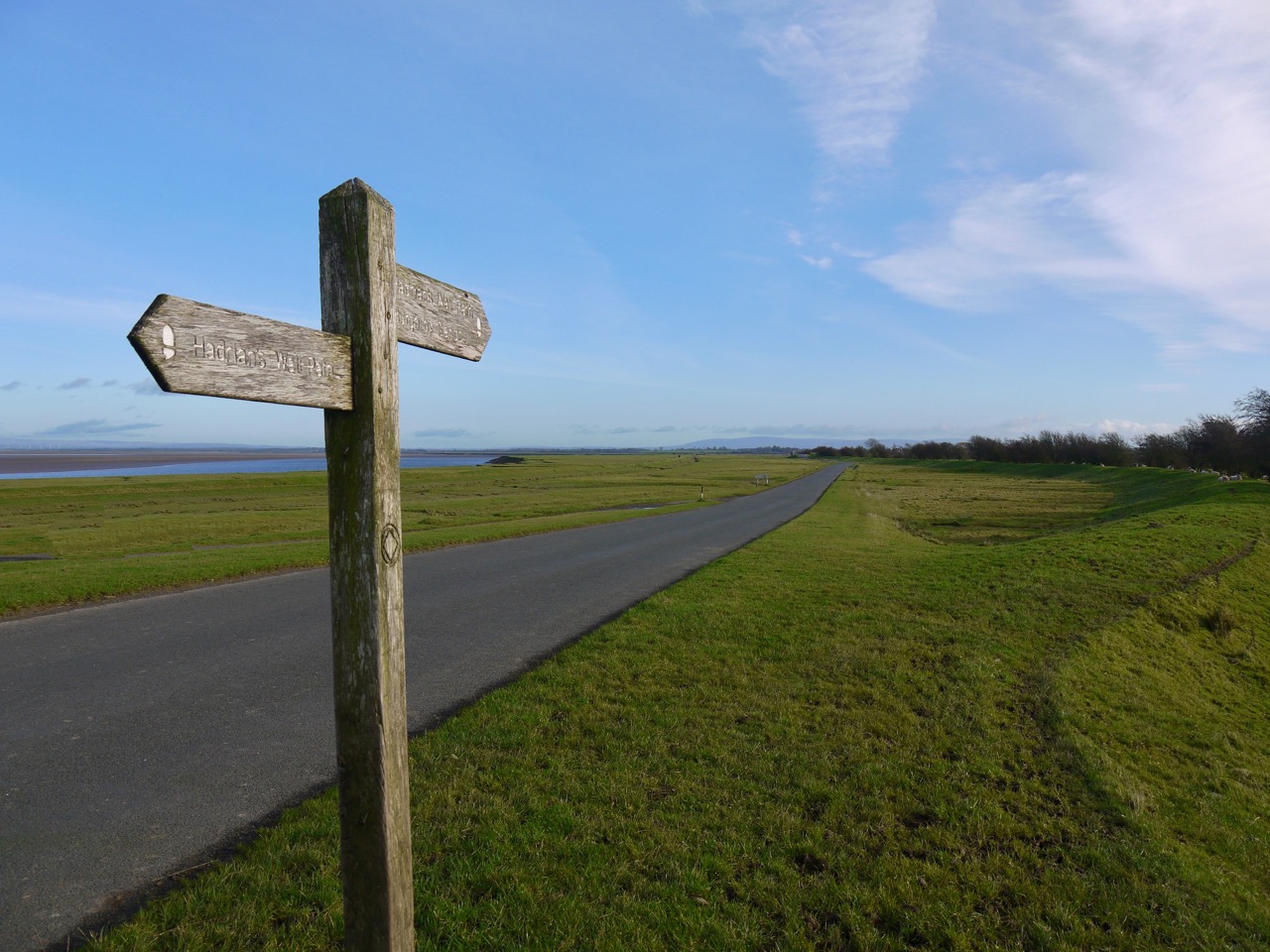 Beyond Drumburgh we walked along a long straight road with grassy banks to our right, tidal marshland to our left and Cold Fell on the horizon in the distance.

A bus shelter with a bench at Boustead Hill was a good place to rest for lunch, with views across the Solway to some rather military looking building on the Scottish Coast. The ‘famous’ Solway Firth Spaceman photograph was taken near here. I would have sneered at the adjective “famous’ except I have actually read about this photograph before, though I hadn’t realised where it was taken. I was more interested in the sign within the shelter, which I first thought was there to ask us to keep the place tidy, but actually warned us to shut the gate to the shelter since otherwise cows would get in and make a mess. The sign opposite told us we were 5.5 miles from Bowness and 2 miles from Burgh. 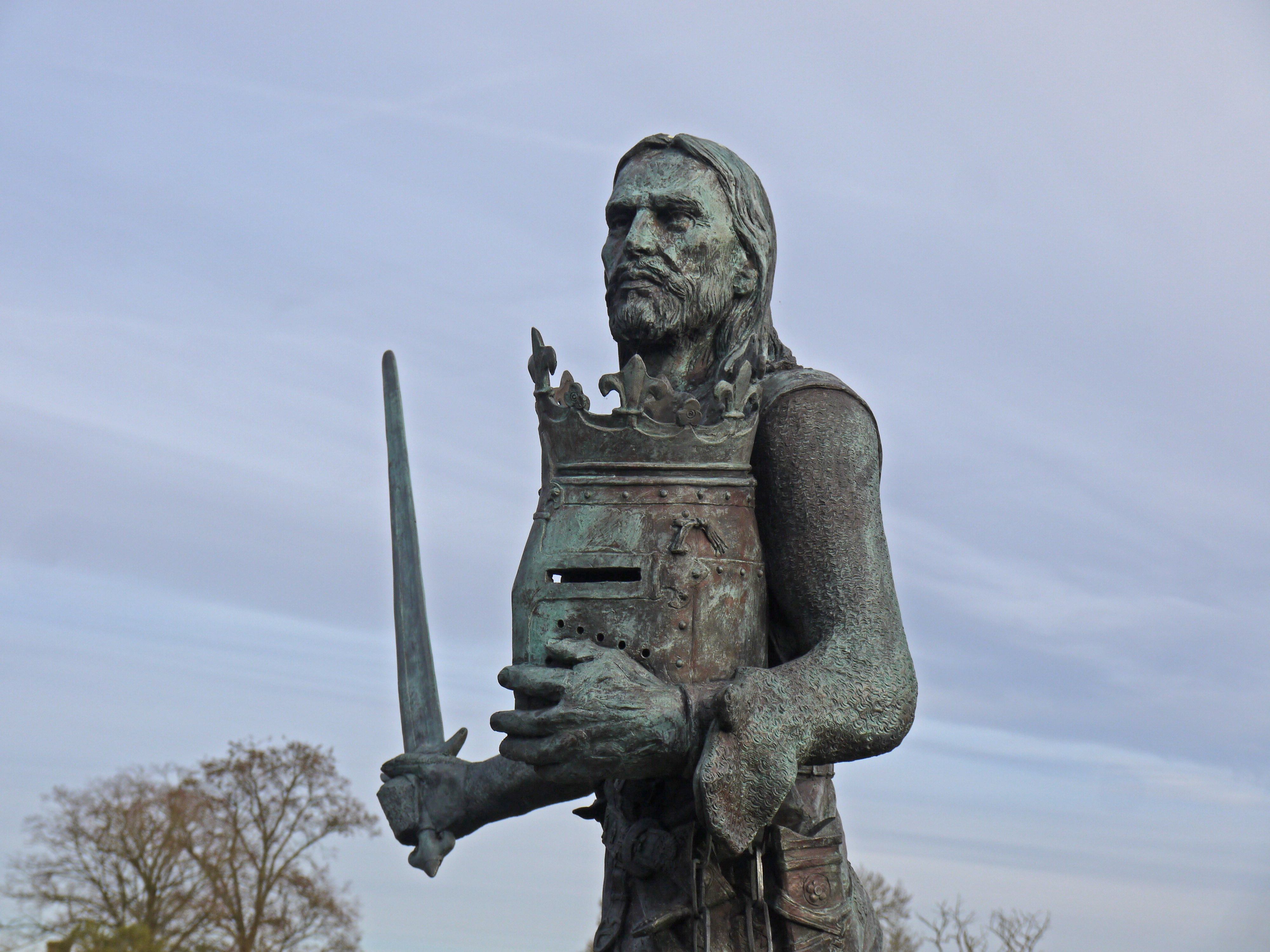 A little more walking brought us to Burgh-by-Sands whose main claim to fame is the that Edward I died here in 1307. Having defeated the Welsh he was riding to put down the Scots but died of dysentery while travelling north. A statue stands in the village and a memorial on nearby marshes marks where he actually died. He lay in state in the local church and there are plaques within the graveyard commemorating important events in Burgh’s history. 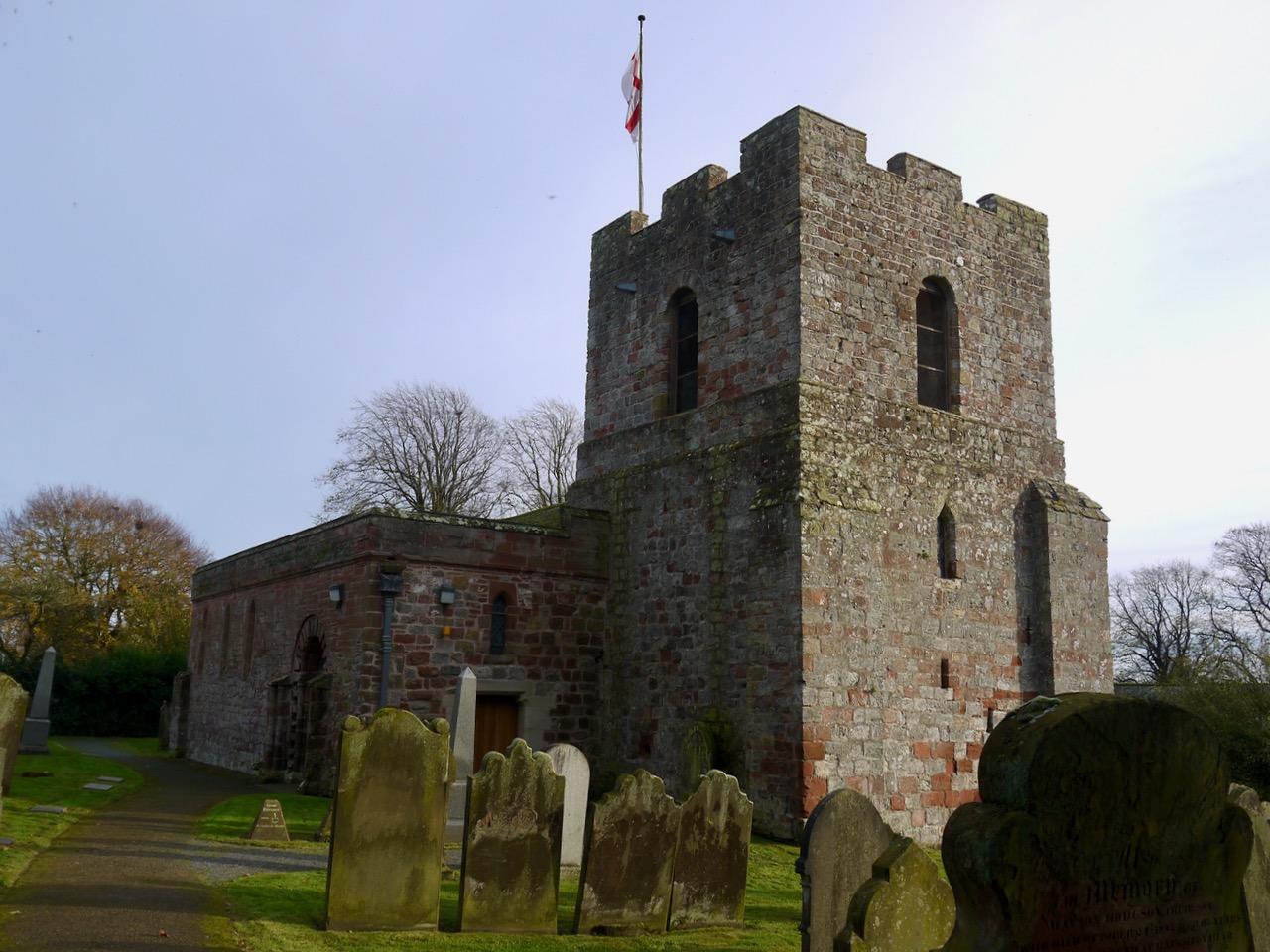 St Michael’s Church was built in the 12th century using stones from The Wall and the fort of Aballava. The tower certainly seems to have been designed for defence, so presumably this was a dangerous place when it was built. 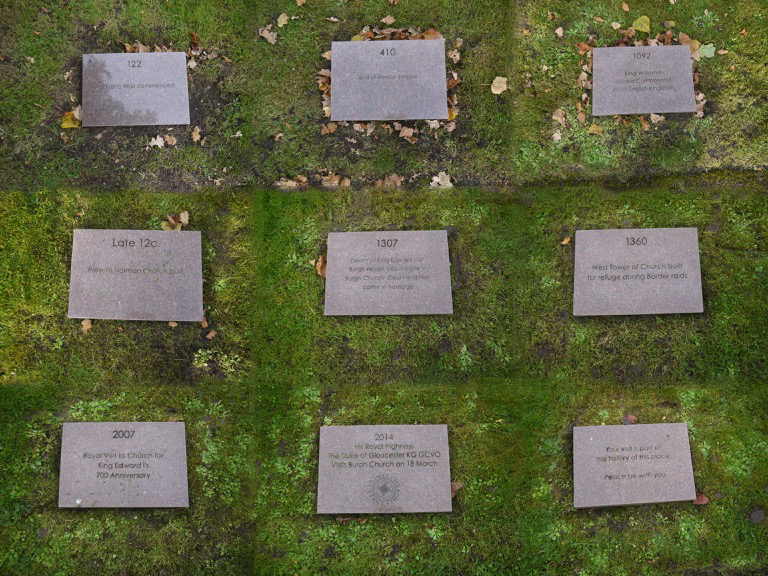