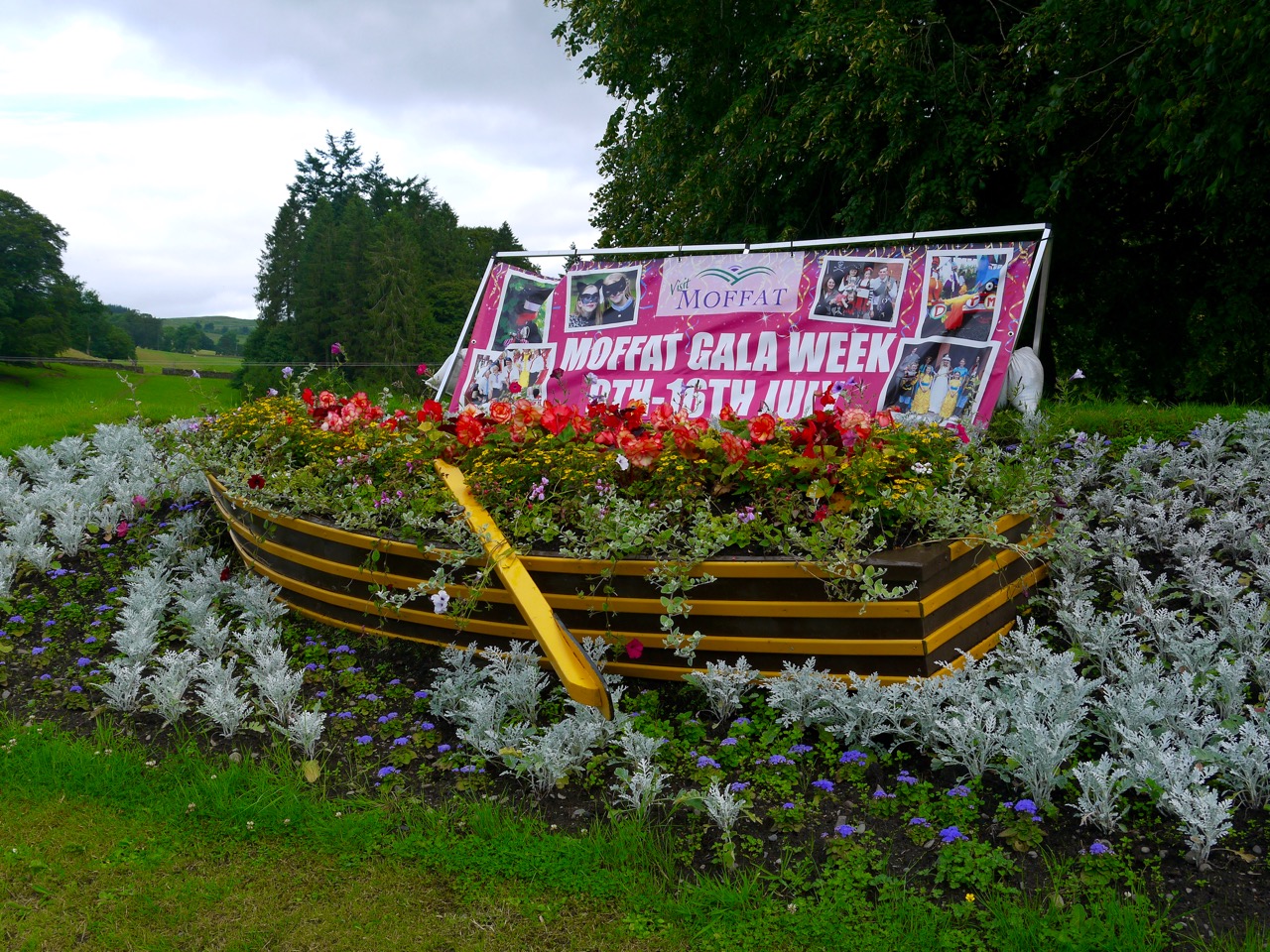 Annandale Way: Moffat to the A701 near Raehills

The second leg of the Annandale Way took us from Moffat to a little north of St Anne’s Bridge leaving the River Annan to follow one of its tributaries, the Kinnel Water, for a few miles, the grey skies disguising the sun’s rays.

We began at the Moffat car park just across from the boating ponds, bade farewell to the still diminutive River Annan, and set off along the A701 admiring the large houses along the way. The floral welcome to Moffat is now topped by a rowing boat, the surrounding flowers in waves of blue to simulate water. I didn’t recall the boat being there before and a quick check of old photos confirmed my recollection.

Despite walking along a main road, the hedgerows gave us some nature to look at. There were both the usual suspects and some strangers such as a marsh woundwort, looking very much like its mint relatives but without the sweet smell of mint or the malodorous pong of the hedge woundworts we found later in the day. 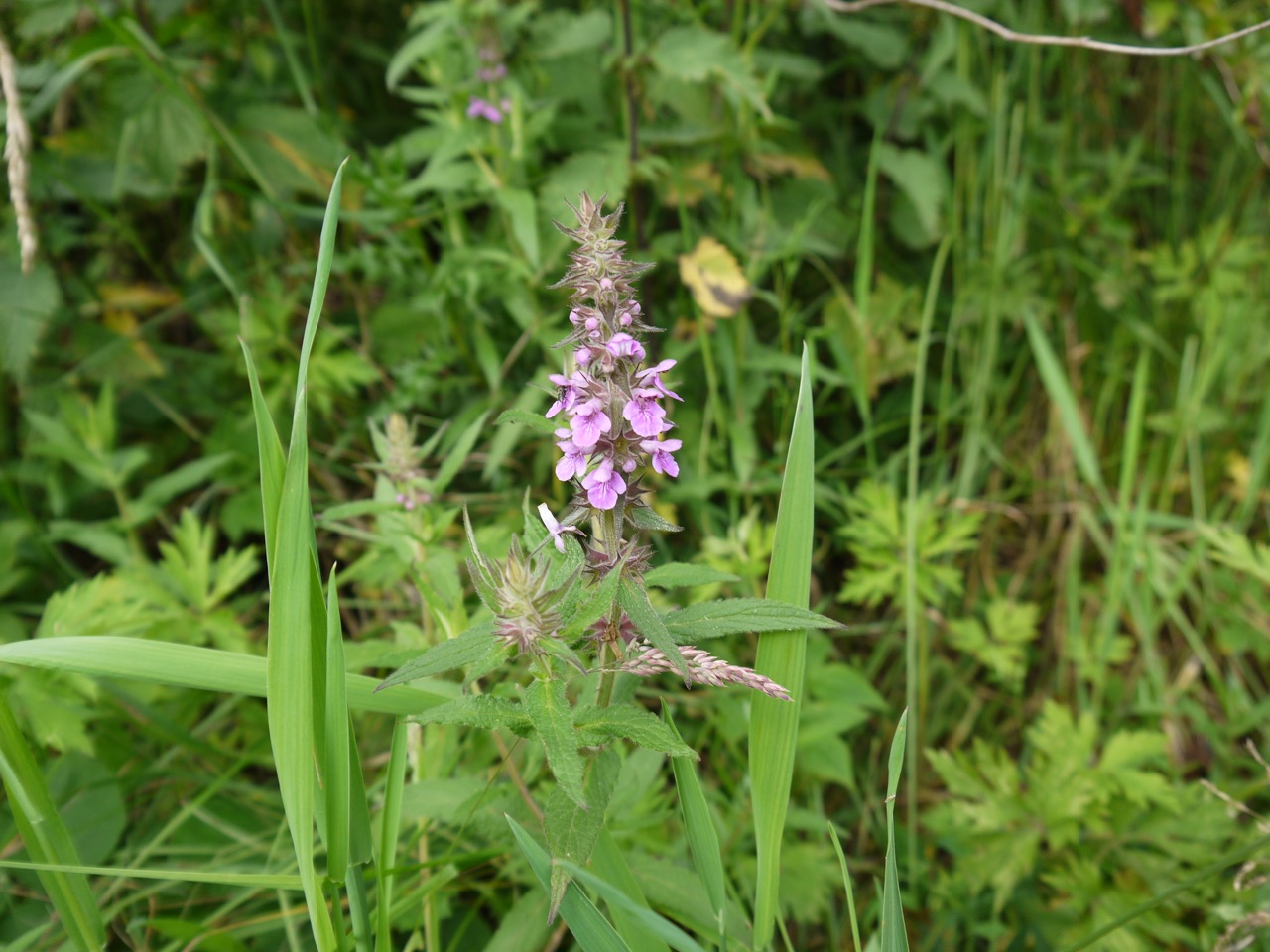 It would be easy to miss the remains of the the railway crossing the road, and of course our car park would once have been the railway station. My eyes were open though for three standing stones, said by the OS to mark the site of a thirteenth century battle. I have driven along here many times and walked several times without noticing them and though easy to see when you know they are there, they are easily overlooked being overgrown beside the road.  It looks as though the original road was on their far side. 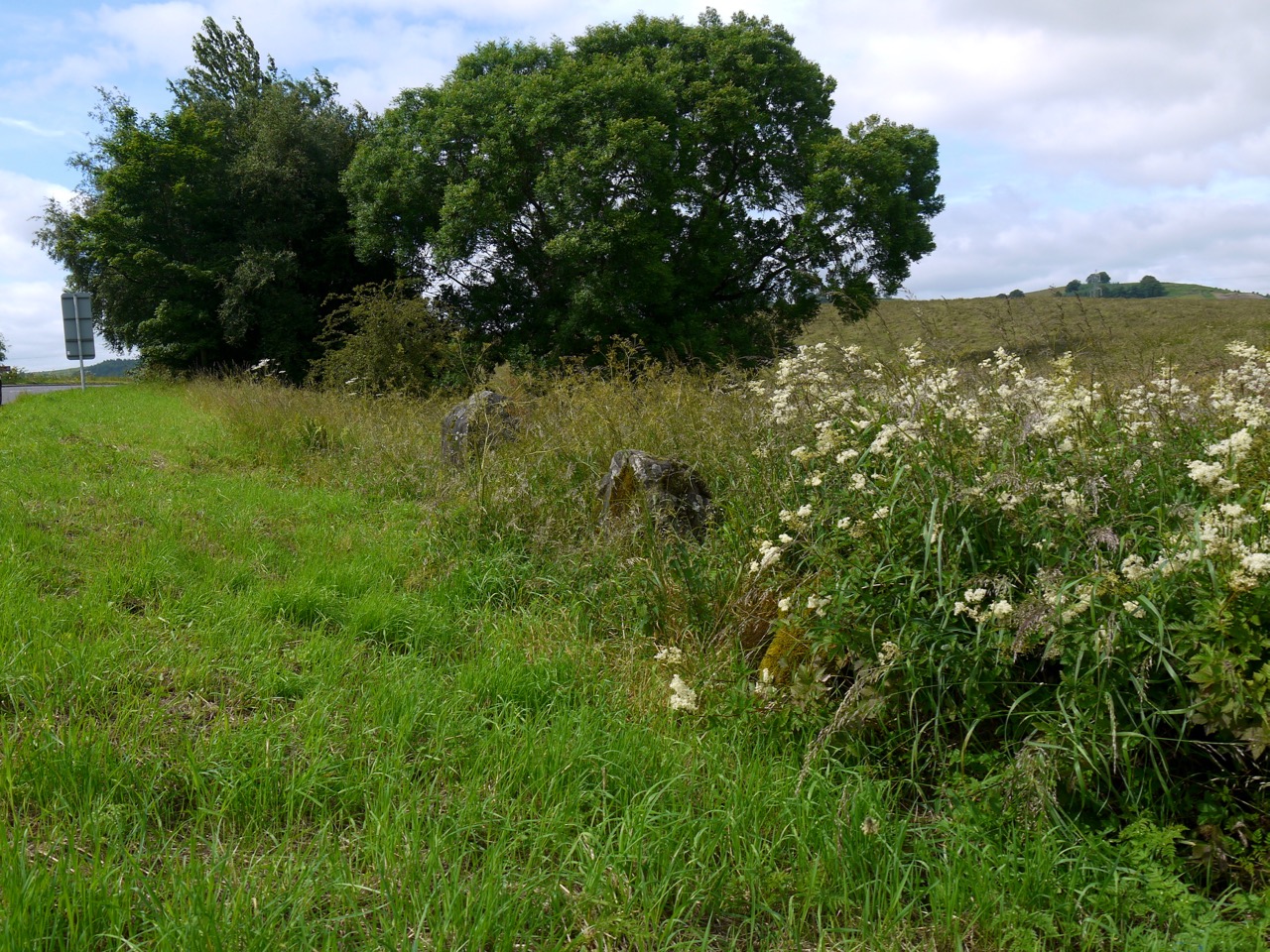 A rather pleasant looking landscaped pond could be seen from the road. I hope this is part of the Moffat nature reserve rather than someone’s private garden. It was good to leave the road behind and pass through an AW gate into fields with shorn sheep and chunky lambs.  We found water forgetmenots by a small watercourse, our first hare bells of the year, and had views up to the Moffat valley.

The route beside the dyke here is shown on OS maps as the route of a Roman road, but there is nothing remaining to show this either on the ground or from satellite photos. The dyke has extruding stones similar to those usually placed as footholds, but placed so regularly and frequently that they can only be for decoration, unless the field was used for bullfighting or rodeos and these extrusions allowed contestants to escape. I suspect bullfights or rodeos in Moffat would have made the local news though, so decoration remains more likely.

Back on a minor road, that the AW shares with the SUW and R&R, we had different hedgerows for a while, then left the road to walk beside Evan Water as we crossed under the M74 and A701. 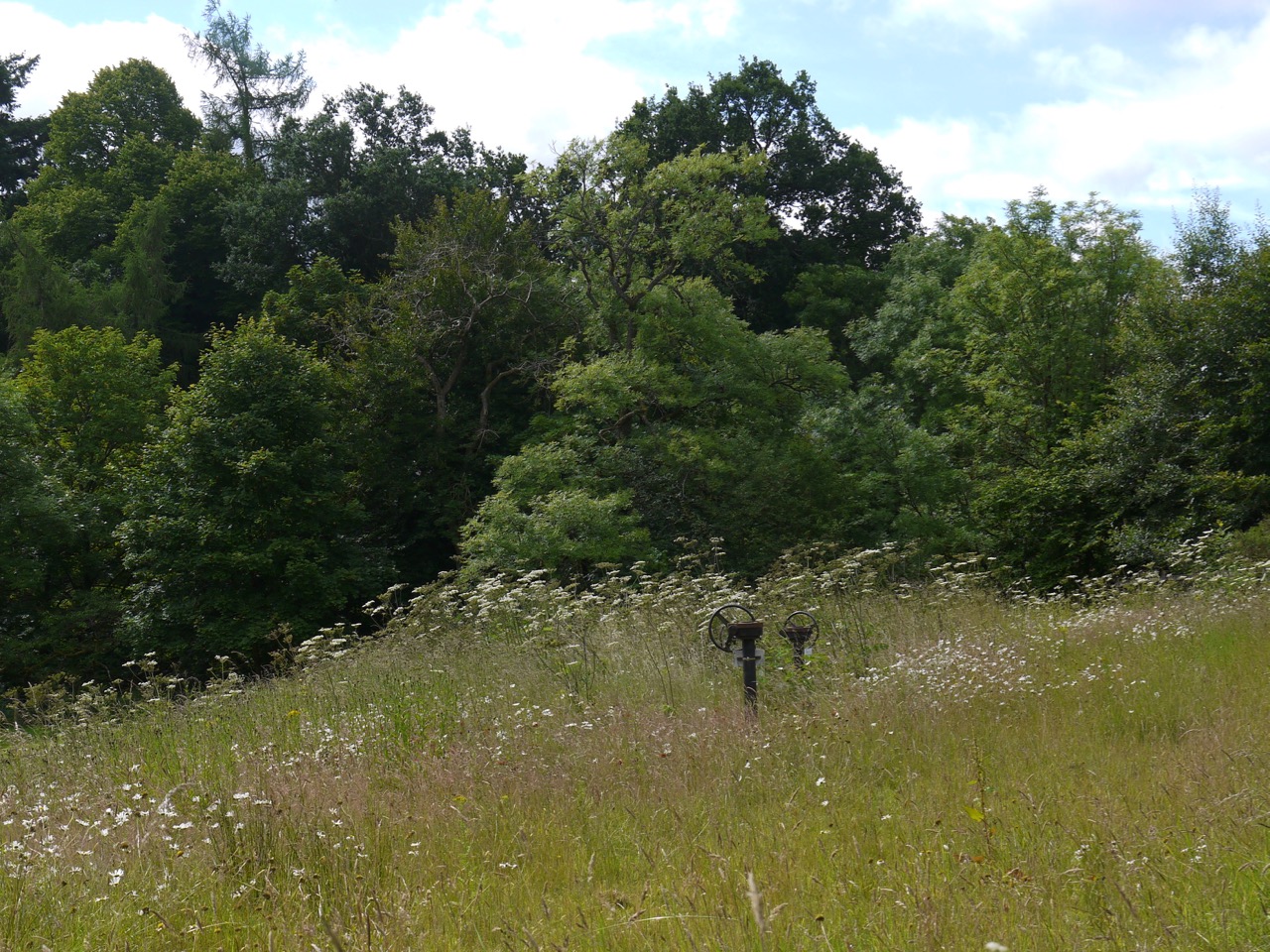 After the underpasses we walked through the Beech avenue that usually has ponies in the adjoining field but none today. Beyond the shade of the avenue we came back into the sunshine and a small meadow with by some rusting wheels.

Evan Water was crossed on the old bridge where a carved sandstone inlay informed us the bridge had been build by John MacDonald in 1819 to a plan by Thomas Teller. A smaller plaque commemorated its widening in 1951. We then turned up the road towards Kinnelhead, and steeled ourselves for the climb up the Crooked Road. We passed  sneezewort, scentless mayweed, which I might have mistaken for ox-eye daisy if I hadn’t noticed its leaves as we walked, and ragged robin which though my books on wildflowers list as common, I had not seen previously. 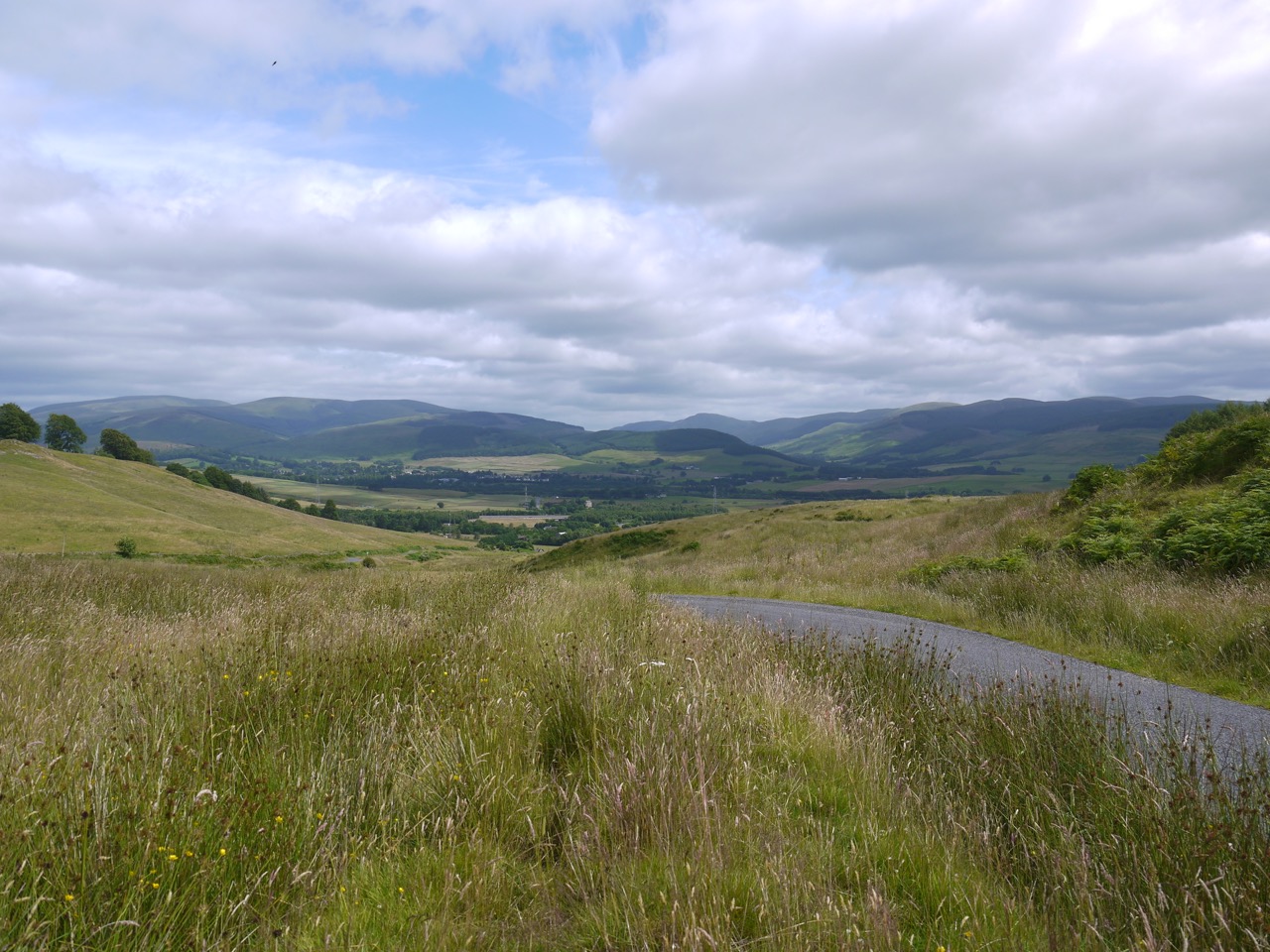 View from the bench

After the climb, which to be honest was not that arduous, we found a bench with Annandale Way and Southern Upland Way badges. It looks quite new and I don’t recall it being here earlier in the year. It offers a good view into upper Annandale and the southern Moffat Hills and an opportunity for a brief rest after the climb. A little too early for lunch though. 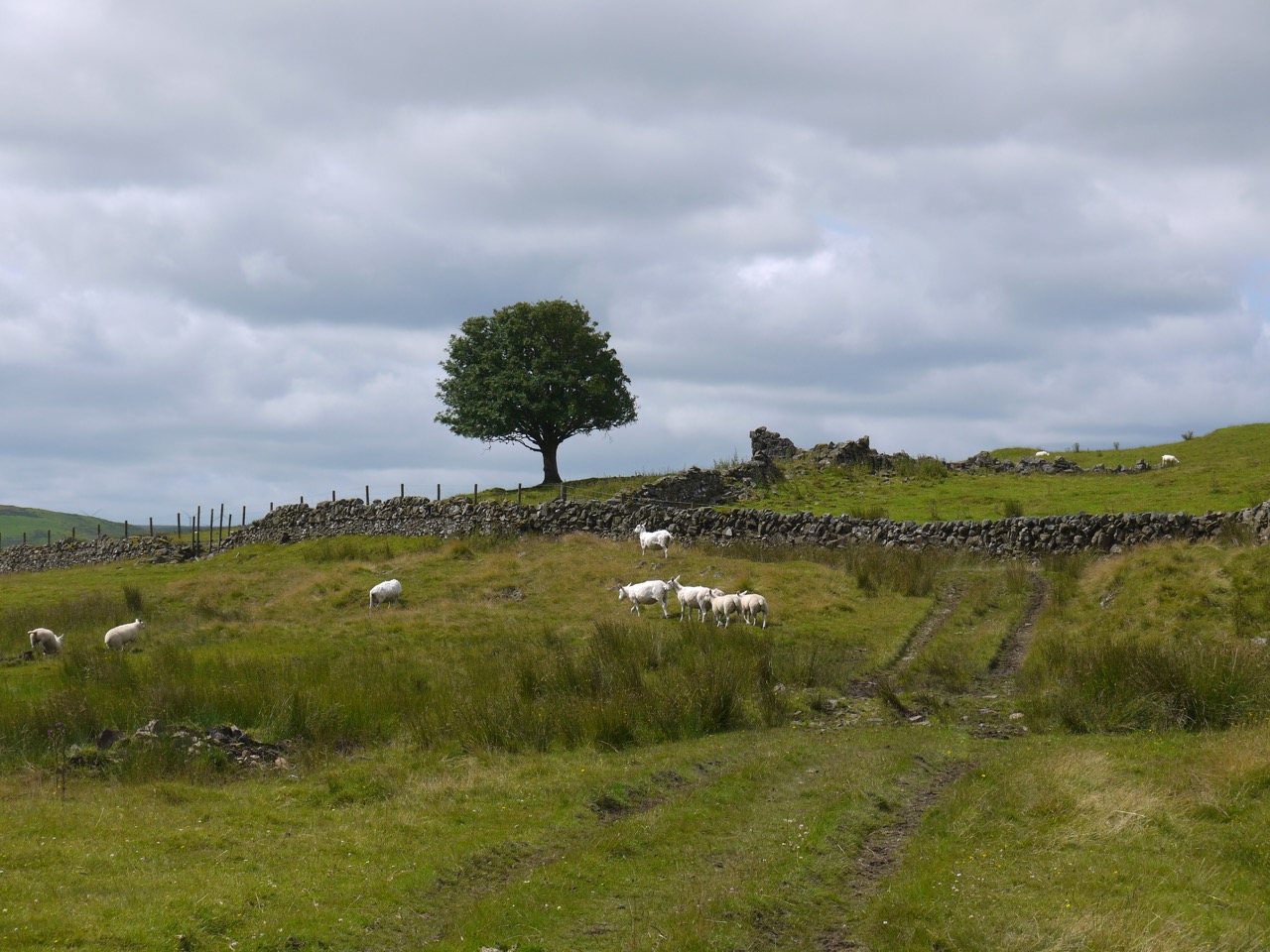 The AW then leaves the road to climb beside a wood between walls on a deeply rutted track. The walls end  leaving some uncertainty about the route, one wall continues straight on  while the other heads off to the right. The OS map leaves no uncertainty but it was neatly folded in my rucksack, but before I needed to reach for it, the lone rowan tree over to my right caught my eye and triggered a memory, so we headed that way. We passed a farmer repairing the stone wall to music and having followed the wall we were funnelled once more between two walls and negotiated a slightly boggy area at the gates to cross into the field on our right for a few hundred metres before crossing back and making our way over Weatherlaw Knowe. A sign informed us we were one mile from Cauldholm. 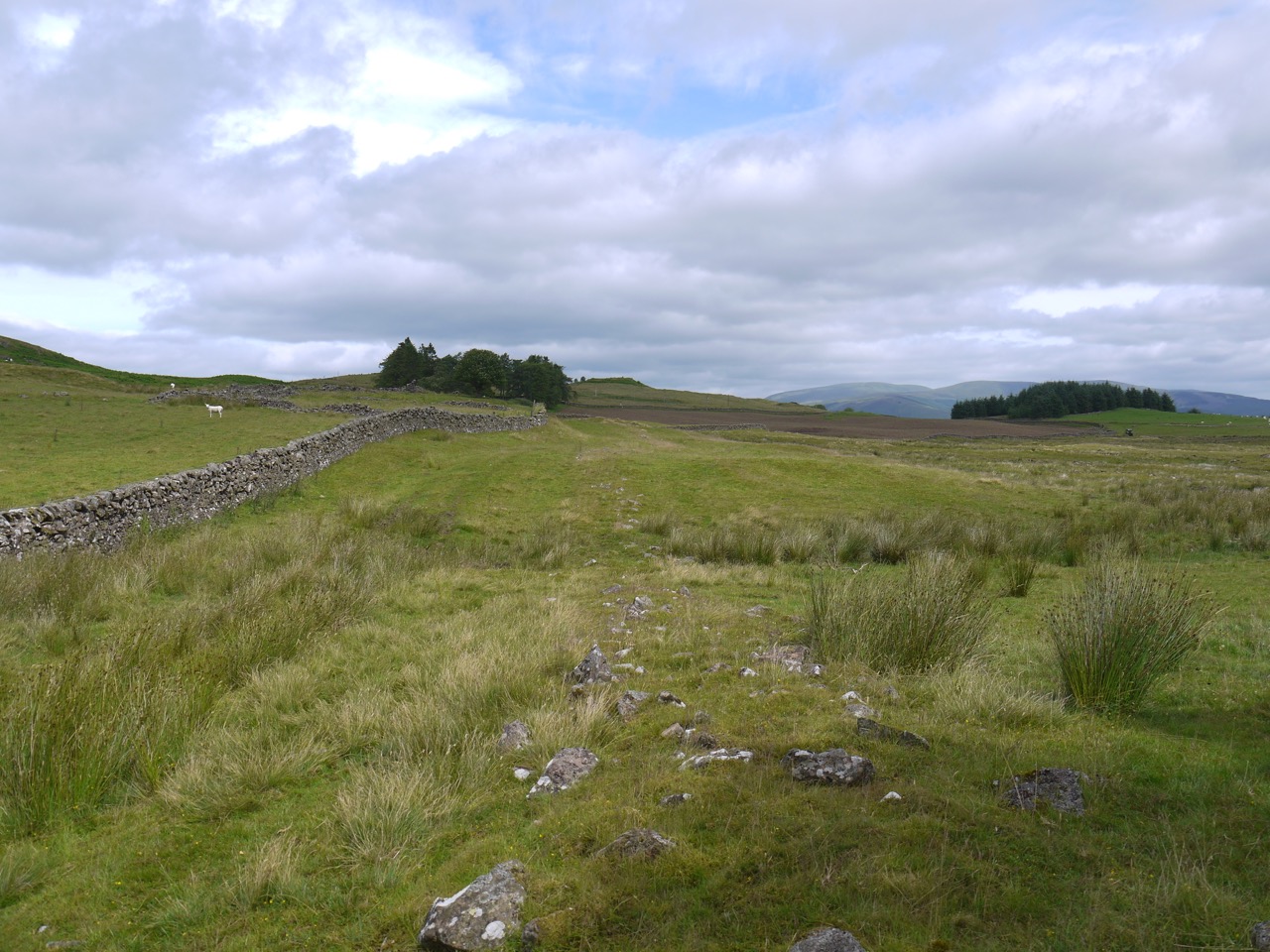 Stanshiel Rig, stones on the ground suggest there were once two walls here

We had some difficulties working out which way to go here  six years earlier since the marker posts where lying on the ground. They have been replaced by sturdy posts the width of telegraph posts and shoulder high with white reflective plastic caps. Easier to see. It was interesting how firm the ground here was, presumably it does not have the underlying granite we have become so used to. Having said that the ground over to our right had more boggy type vegetation, including bog asphodel, which was obviously bewitched to prevent automatic camera focussing, and stands of orchids, 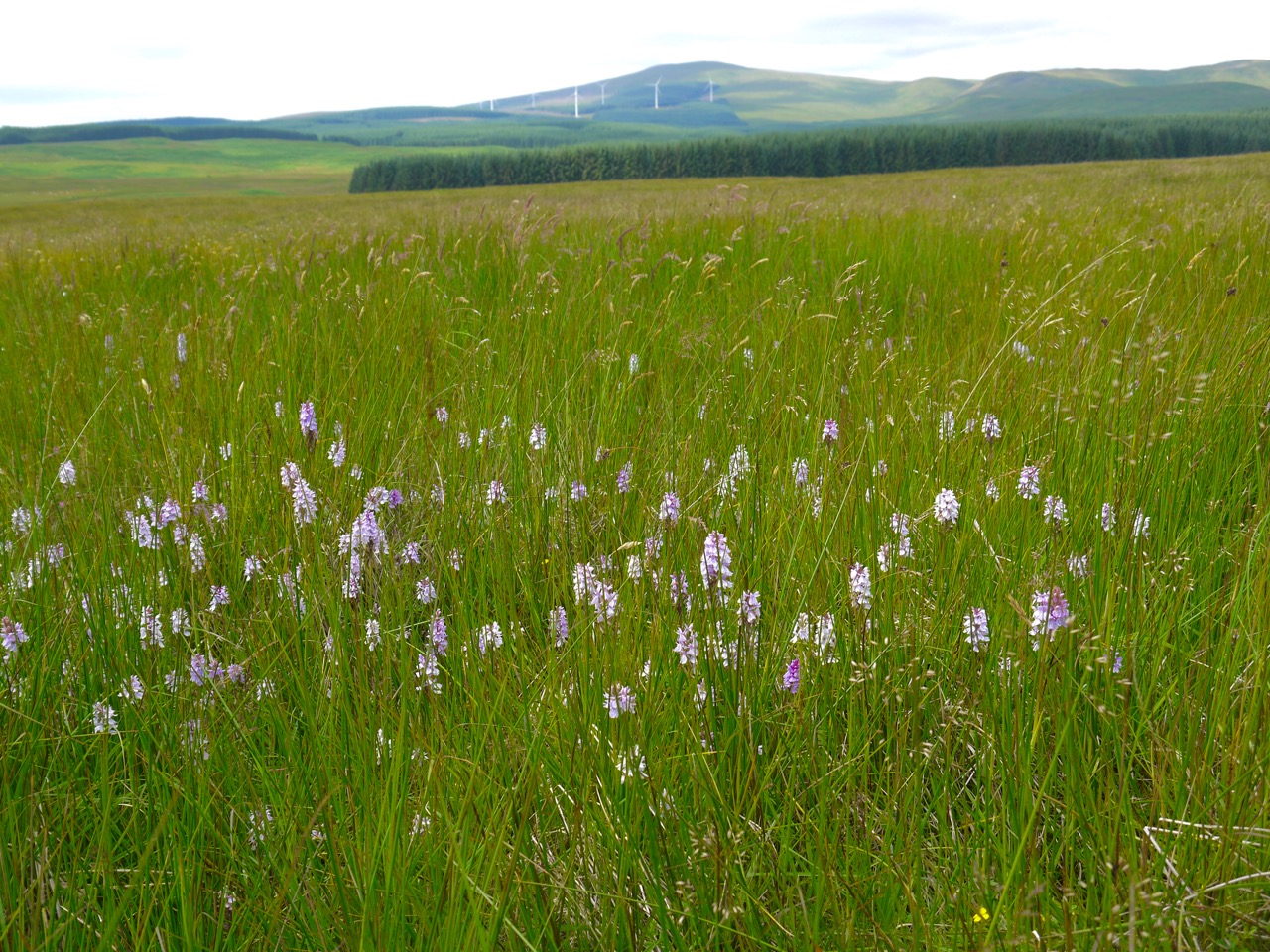 Orchid field, Queensberry in the background

I had my eye open for cairns, since there are supposed to be numerous small cairns. Indeed once you knew to look there where several small piles of stones and small mounds. We were presumably walking across an ancient cemetery, approaching Cauldholm farm, the route became a more defined track as we reached a stand of trees, the whole track was covered with what I call pineapple mayweed and Audrey calls pineappleweed. It seems she is correct but it is of the mayweed genus. Kneeling down I could easily smell the pineapple scent. As we approached the farm a hare that had been watching from an adjoining field turned and bounded away. 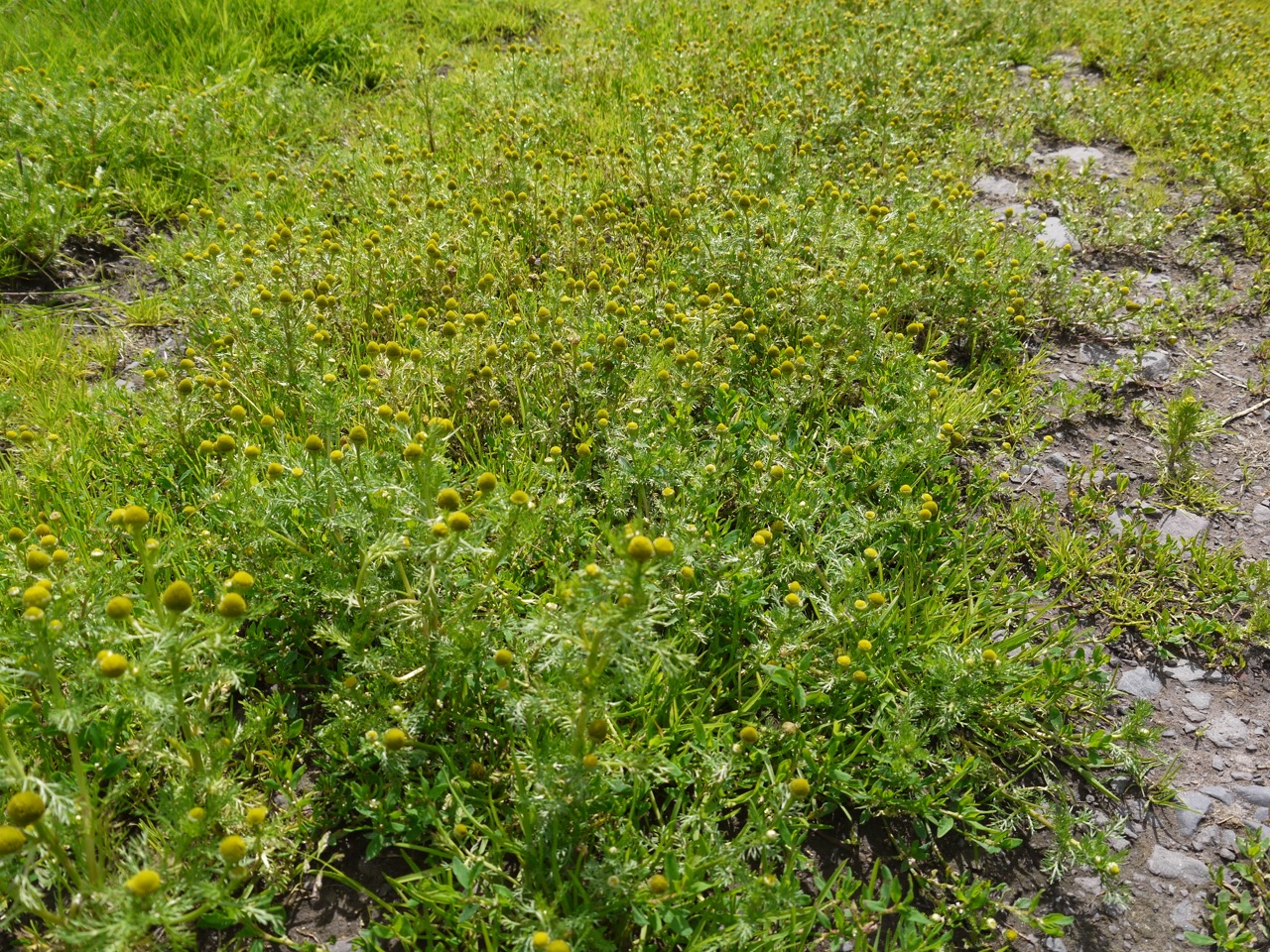 The AW heads through the farm, which had a Marie Celeste air about it. It struck me as being like a scene from a post apocalyptic film where mankind has been wiped out. And the only visible animal was a single chicken. The farm track lead us to a tarmac track and the choice of left, right, or straight on through a gate, but no AW markers. The correct direction is right along the tarmac and over Kinnel water. 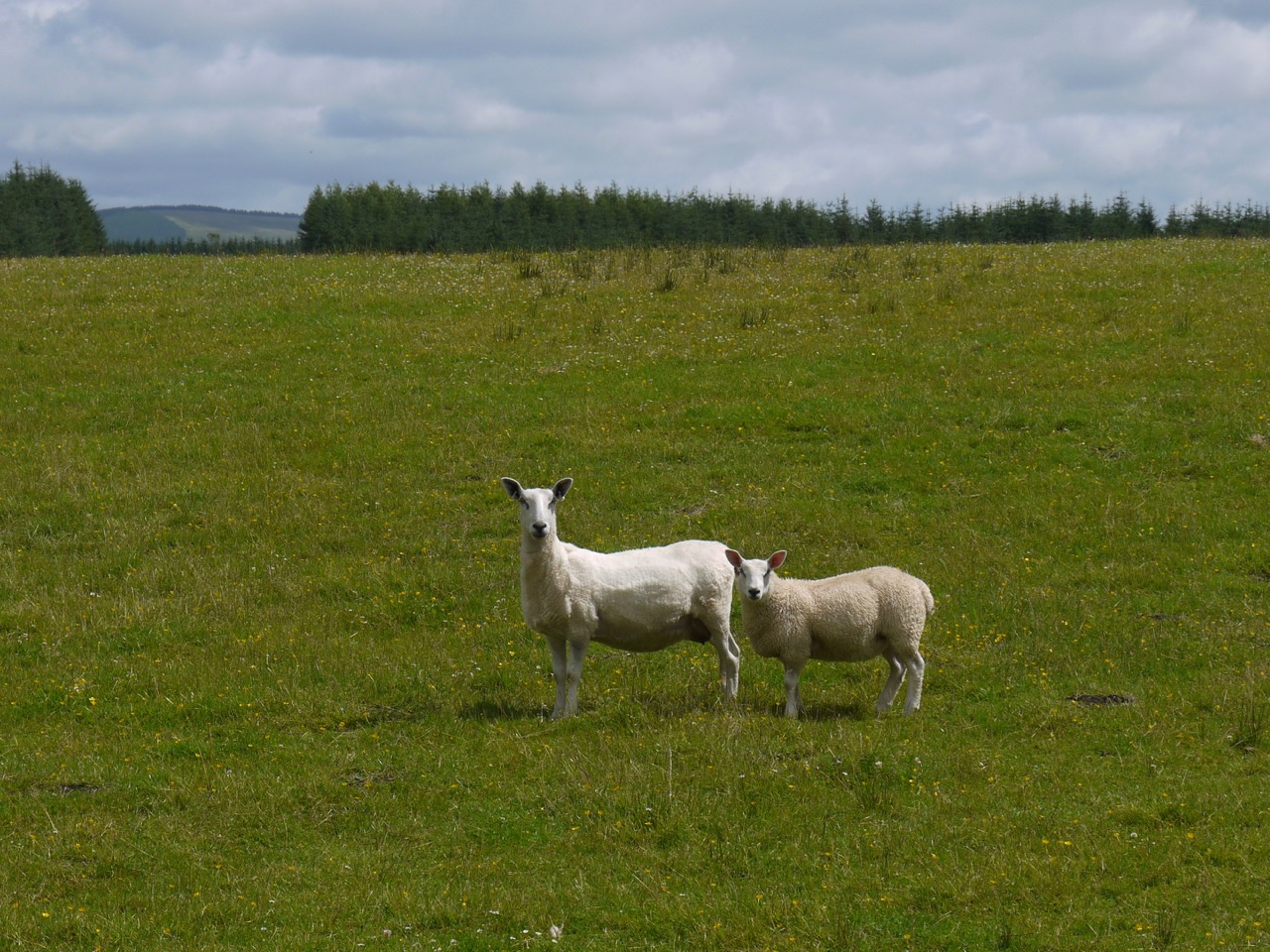 Mile and a half on minor road, hedgerows, smell of meadowsweet, whiff of honeysuckle that was probably not real since I caught the scent when Audrey pointed out the honeysuckle, which was downwindsheep in the fields, thinking that the walk might have been more interesting if it followed Kinnel Water more closely. the final half mile was across a hilltop meadow without hedges or fences. There was a definite small of meadow and we saw a single flower with a large “clock”, and a couple of unopened buds, goatsbeard I think. We kept looking out for more and occasionally went on a foray into the meadow to check out possible sightings, but saw no more. The time had come to look for a suitable place for lunch. Not in the wind, somewhere dry to sit, not much to ask for, nowhere fit the bill. 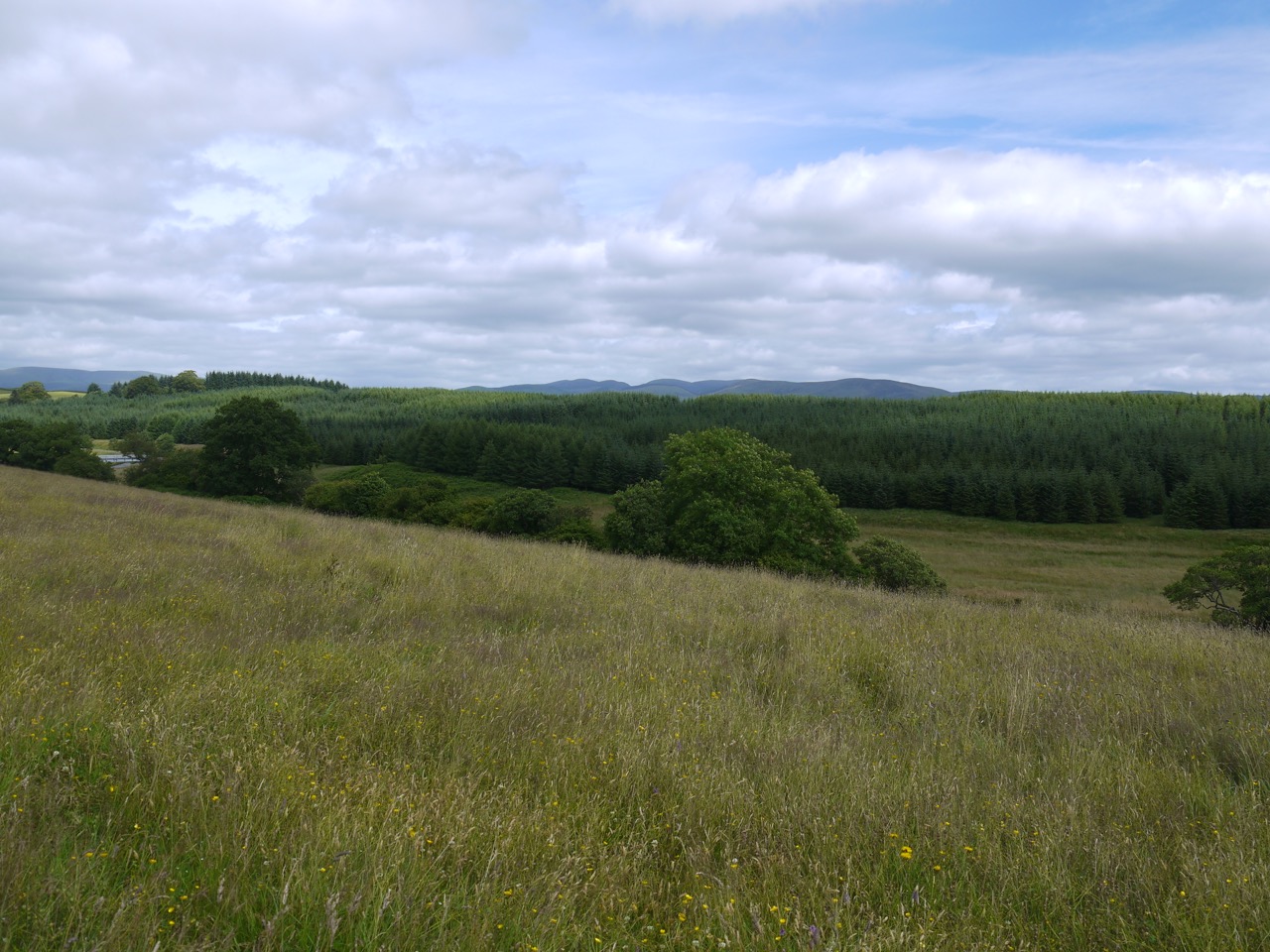 The route dog-legs around and back crosses Kinnel water on a road bridge. There was a little more climbing and then we turned right into Edwardsrig Plantation. A gate tall enough to dissuade deer stood before us, padlocked shut, but we found a way past it. We then had a rather boring one mile stroll through the plantation noting the flowers beside the track. There were raspberries to taste which were surprisingly sweet. I don’t really like raspberries but if they tasted like that I would reconsider my position. 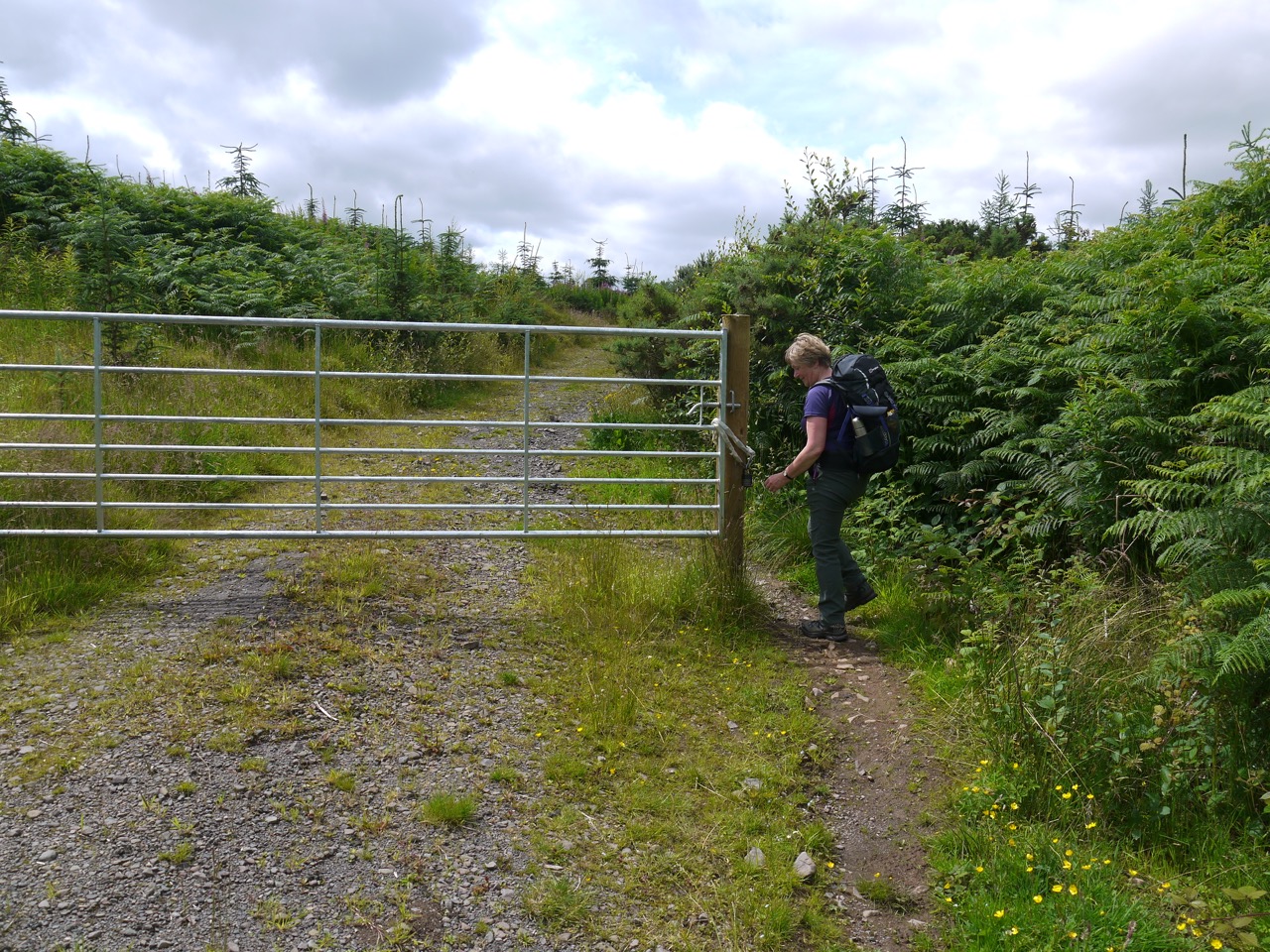 The AW turns left onto a minor road and almost immediately enters a field. A characteristic AW gate and some AW signs make this very obvious. After about 20m we were faced by a field sloping down to the right and no indication as to which way we should go. I could gather from the wear in the grass that others had faced this same problem. Some had stayed at the top of the field, some had headed down some had stuck to the contour. We took the middle ground and stuck with the contour but soon spotted a tiny AW marker up at the top and climbed back up. 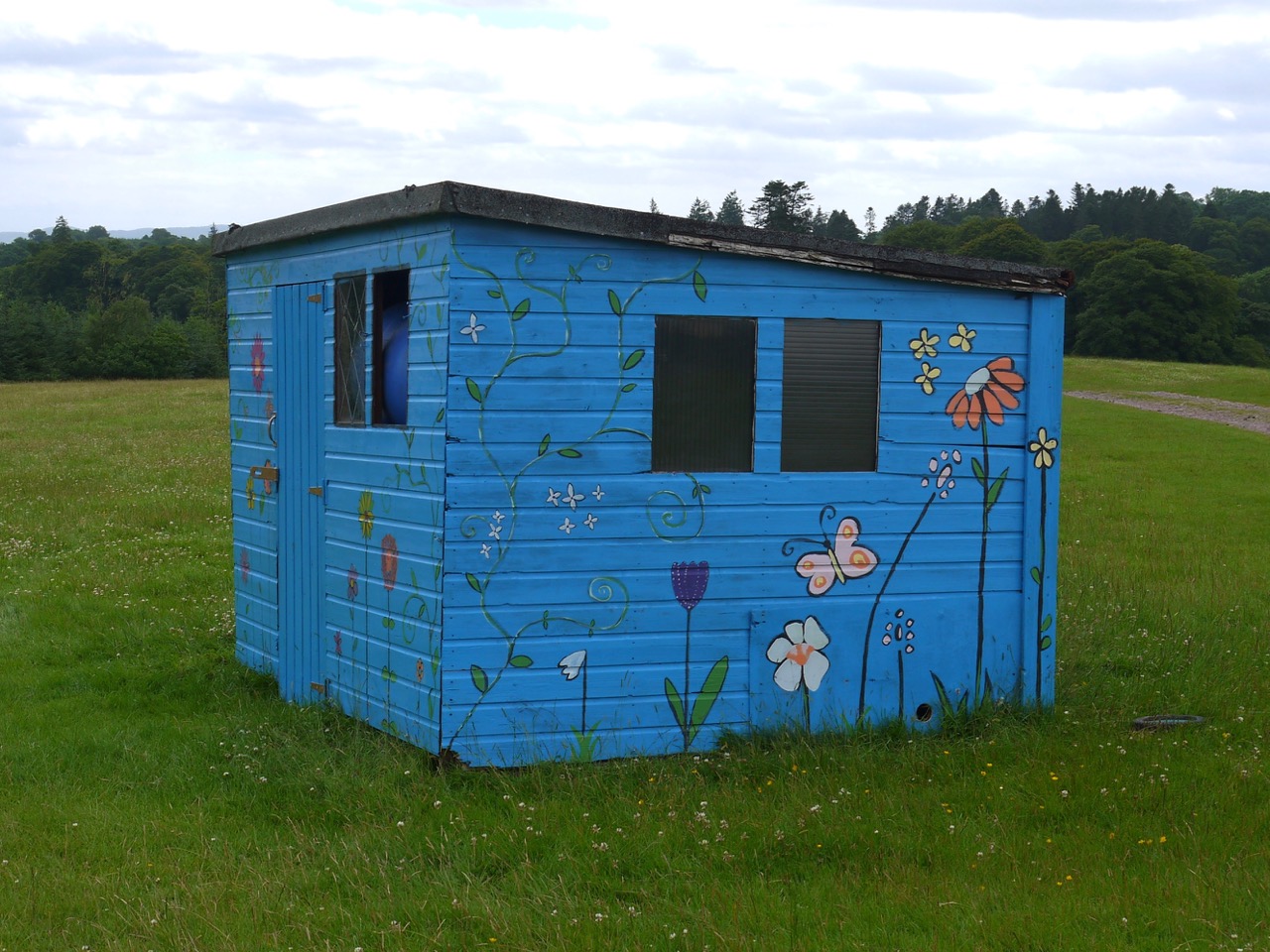 We were faced by another anomaly. a fence across that even had a gate in the middle but did not reach to wood we were walking beside. A useless fence at first sight, but on reflection I presume it is used to direct traffic during the Eden Festival. The only other sign of the recent festival was a small hut painted with flowers, not quite hippy flower power style but a half hearted attempt at it, or understated if you prefer. 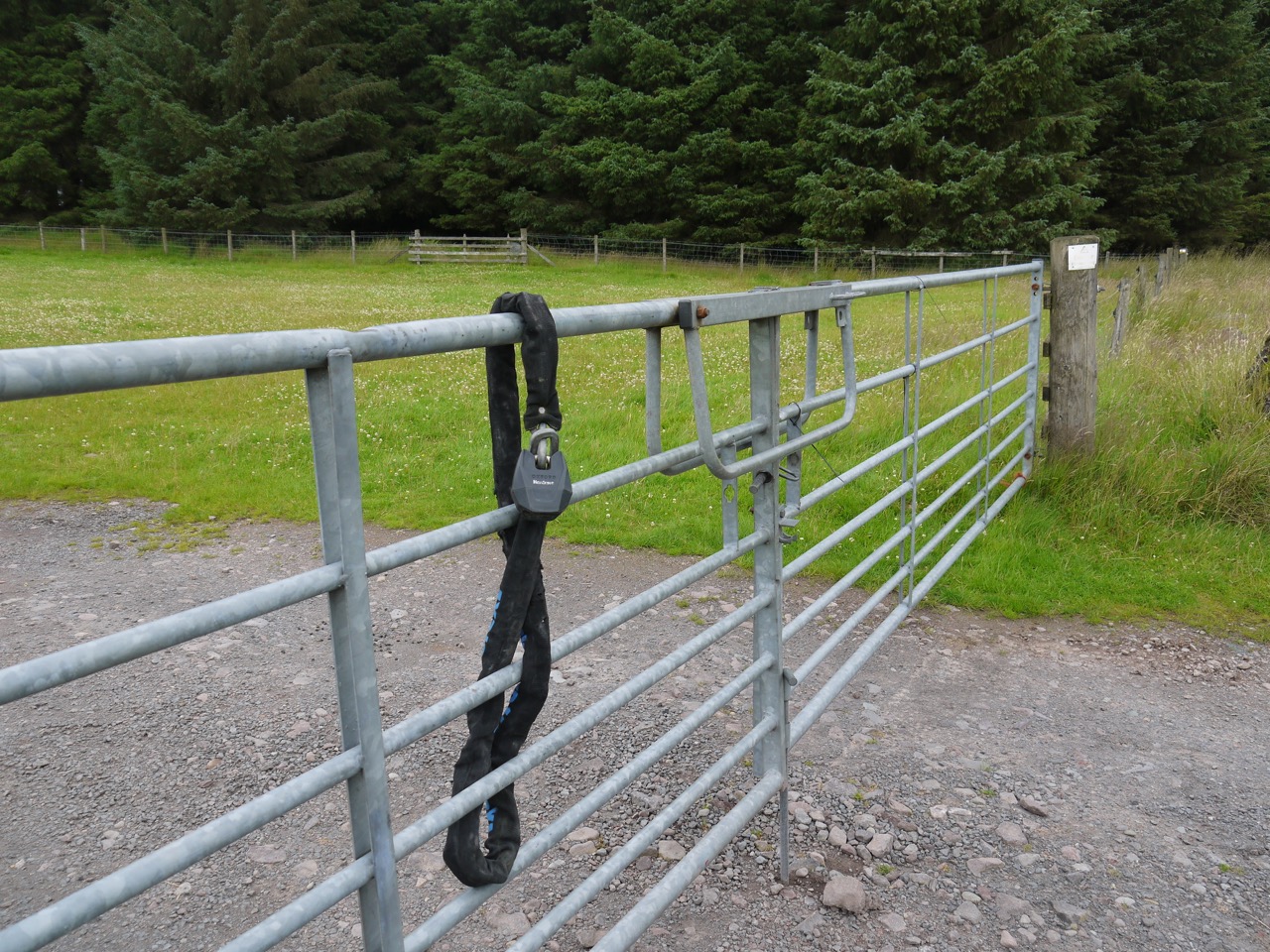 From the hut we turned up towards the now audible traffic of the A701. The large gate here was incompetently locked. Our final AW2 stretch was through the woods that line the A701 and then up to the road itself. From there we made our way back to the lay-by where we had left the car. 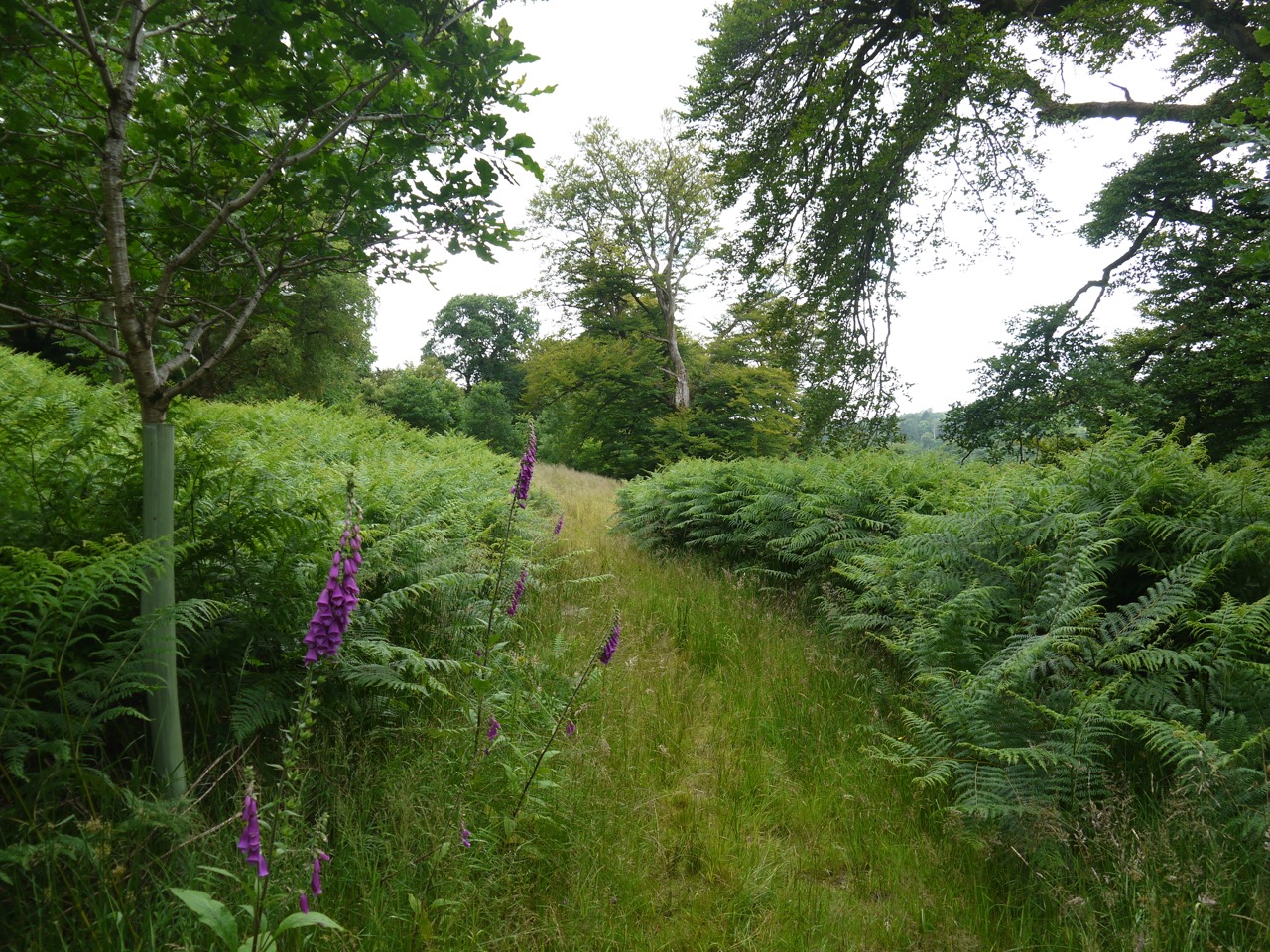 Share this...
This entry was posted in Dumfries & Galloway and tagged Annandale Way, Romans and Reivers, SUW. Bookmark the permalink.