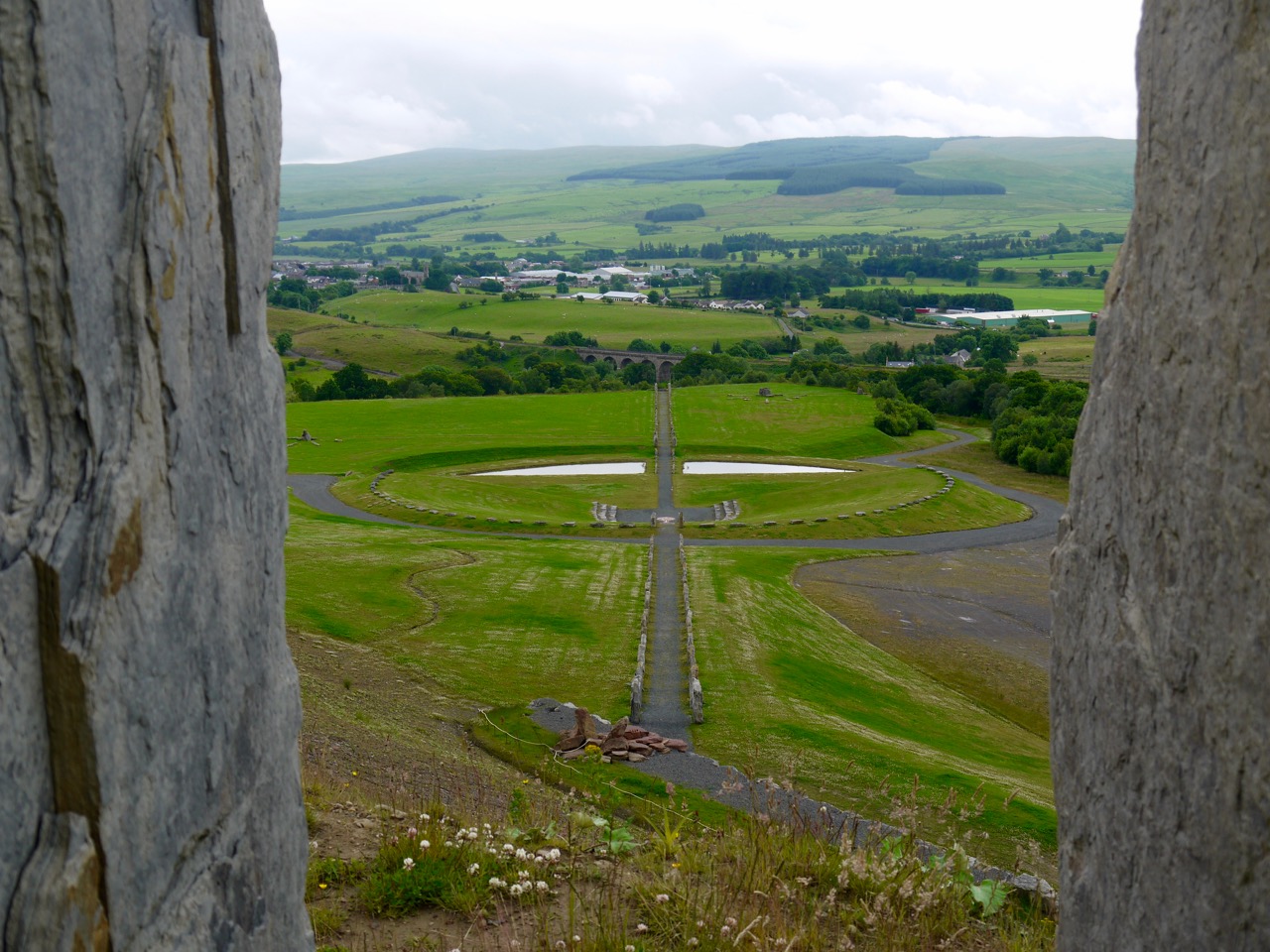 Crawick, Caer Rwyc, is named for Rawic’s fort, and although his name has stayed with the river, the nearby town has lost Rawic’s name and taken instead the epithet “the old fort”, Sean Caer, Sanquhar. Rawic is mentioned in the Book of Taliesin which places him in the time of the old Kingdom of Rheged, between the 5th and 8th centuries AD.

Though Rawic’s people may have mined coal near the surface, and indeed the Romans may have mined lead and gold at nearby Wanlockhead, the area was to be heavily mined for coal in the 19th and 20th centuries. An open cast mine, a kilometre north of the old fort, proved unsuccessful and closed leaving a 55 acre blot the landscape. The Duke of Buccleuch and Charles Jencks  have worked together to make something of the site and it was opened as massive outdoor art installation in 2015. I am surprised though how little it is known locally.

Somewhat exhausted after a weekend’s work I needed an easy stroll not too far away, so the time was right to visit this landscaped site, the Crawick Multiverse. So on a cool grey summer morning we rolled up at the Crawick Multiverse and paid our admission fees. Two tickets. The man at the gate eyed up our walking apparel and suggested we take the longer route, The Comet Path, up to the highest point in the installation then walk back through the main site.

It is difficult to imagine what the area must have been like before the miners came. Old OS maps show the area as a gentle slope rising about 50m in 0.5km. I presume a bite has been taken out of this gentle rise starting in the SW corner and leaving a raised lip along the eastern edge and two large mounds inside. It was along the remaining eastern lip that we walked along the Comet path, after passing a mosaic representation of the area. 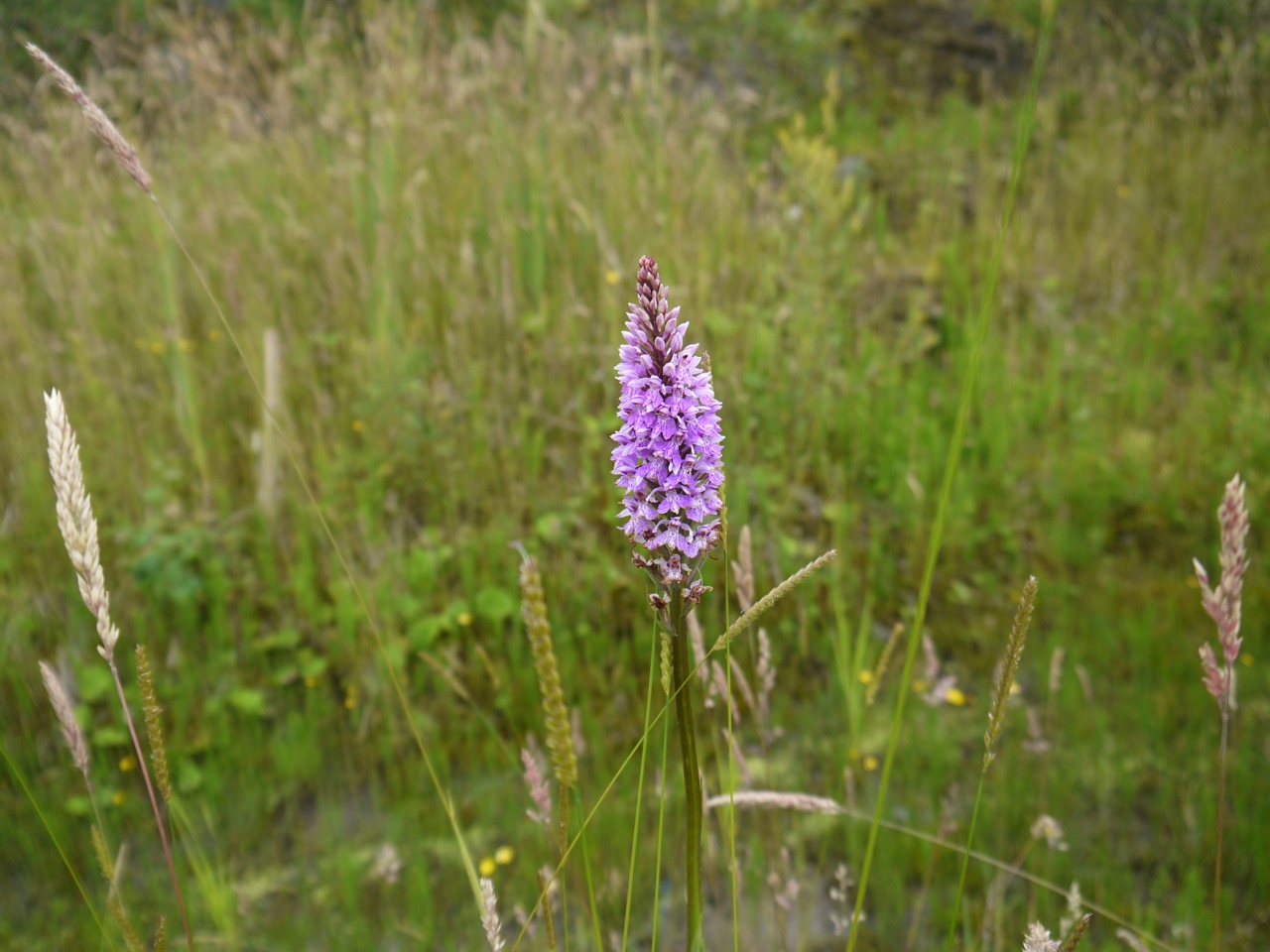 The waste ground at the edge of the site which has been colonised by meadow grasses and wildflowers. White clover predominated but there were were dozens of spotted orchids, along with red clover, and what at first glance looked to be buttercups were in fact spearwort. 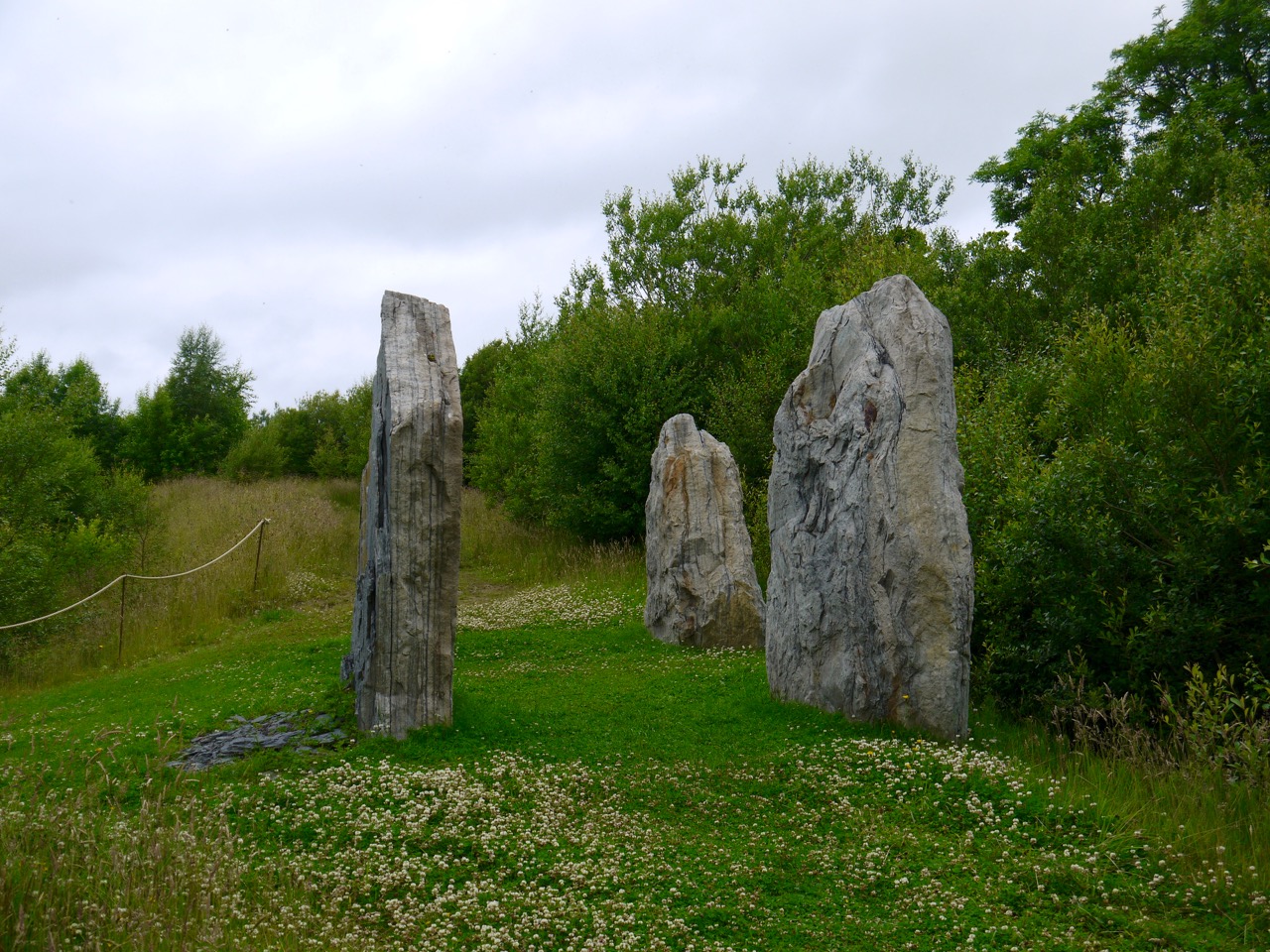 The path took us through a tree lined avenue and passed four large standing stones where a path into the amphitheatre area joined and we had our first glimpse of the interior of the site. Once we left the trees we passed two lines of stones looking like misplaced kerbstones and walked towards what looked like a cross from a distance but proved to be a telescope (requiring 50 pence to use). I hadn’t brought any change. 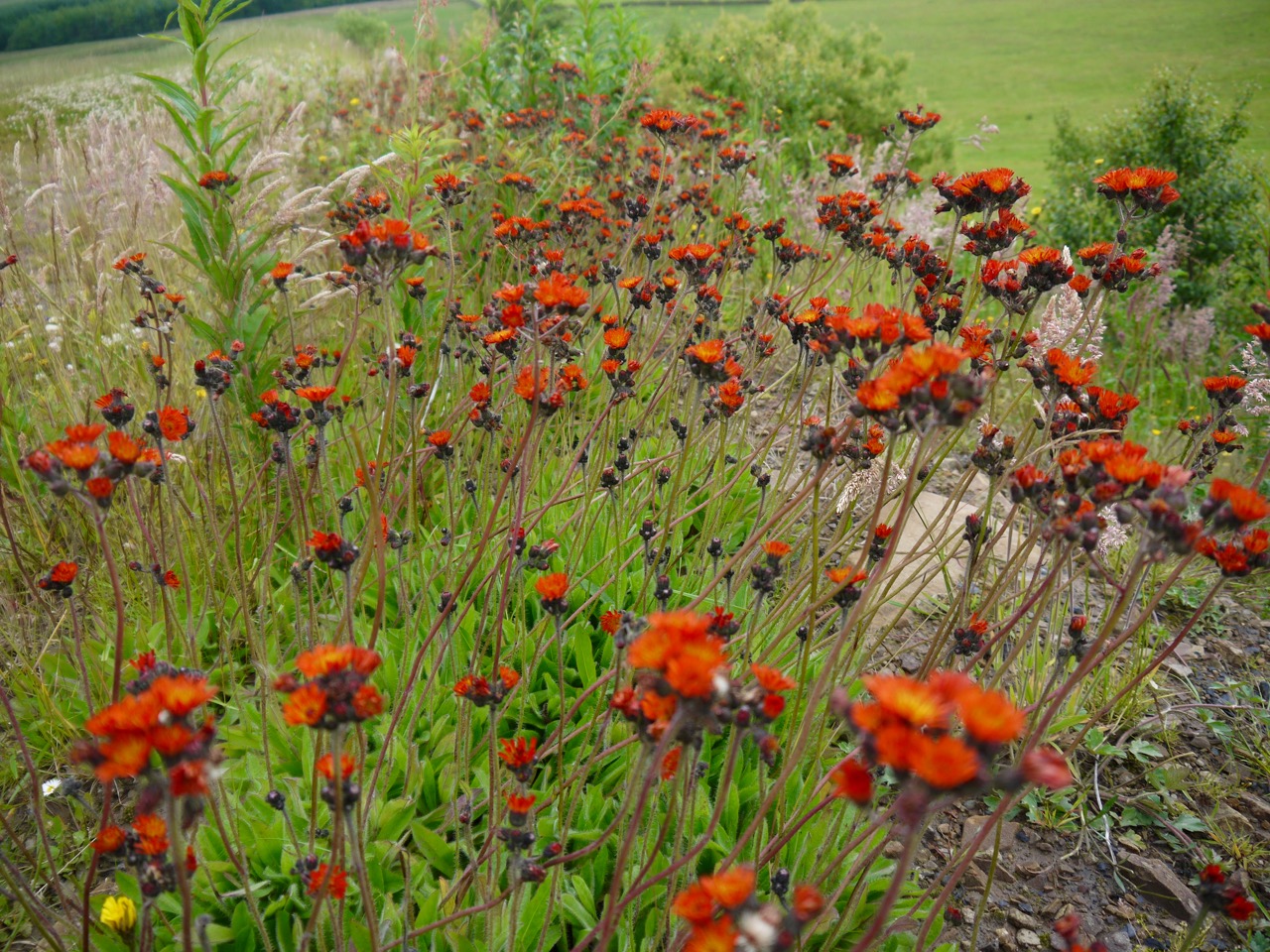 The upper sections here had a great deal of orange hawkweed (or fox and cubs, if you prefer), more than I have seen together anywhere else and I found my eye drawn away from the artificial installations and more towards the wildflowers by the path, all the while mumbling under my breath about a telescope requiring 50 pence. In fact it was the aesthetic inappropriateness of the telescope rather than the price that galled me.

A little further and we reached our first “landforms”, the Belvedere and the Void. The former being a wee knoll with an ascending spiral path up and the latter a hollow with a descending spiral path, the two mirroring each other. A belvedere ( fair view) is an architectural structure sited to take advantage of a fine or scenic view, and in that respect it is well named allowing as it does a view across the whole site as well as the surrounding countryside. 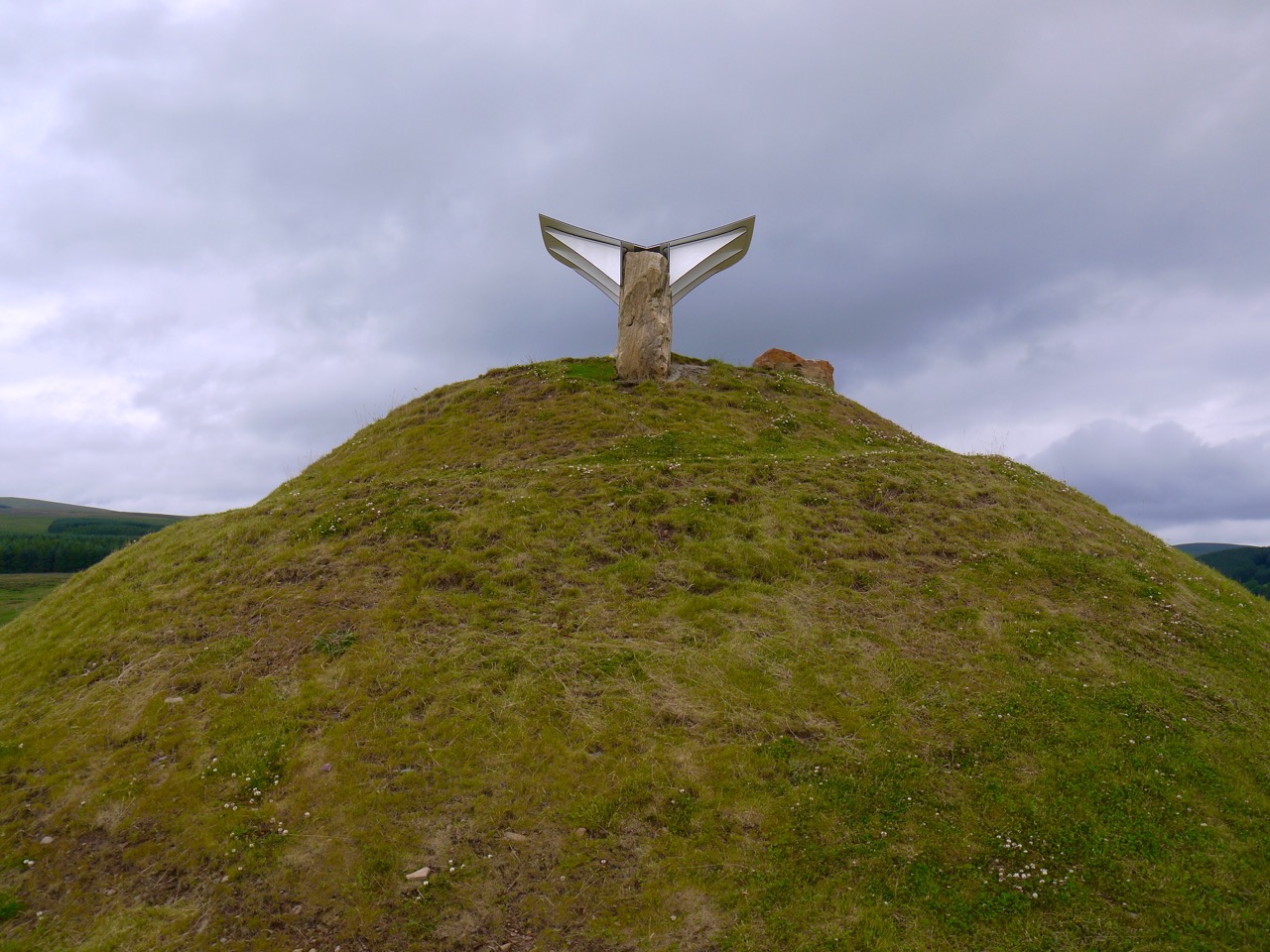 Belvedere has a number of large rocks arranged at its summit and a wing like installation with line drawings and names of the site and surrounding hills. The wing points directly along the North-South path and the stones behind it apparently represent a finger pointing towards the North Star.

I clambered onto the stone finger to get a better view for a photograph but hadn’t noticed that the top was covered in bird-shit. What’s worse this material showed very low avidity for the rock it sat upon but high avidly for hands, cameras, trousers etc. leading to a rapid transfer from the rock to me, my clothes and my equipment.

It will now always be Birdshit Rocks rather than Belvedere to me. 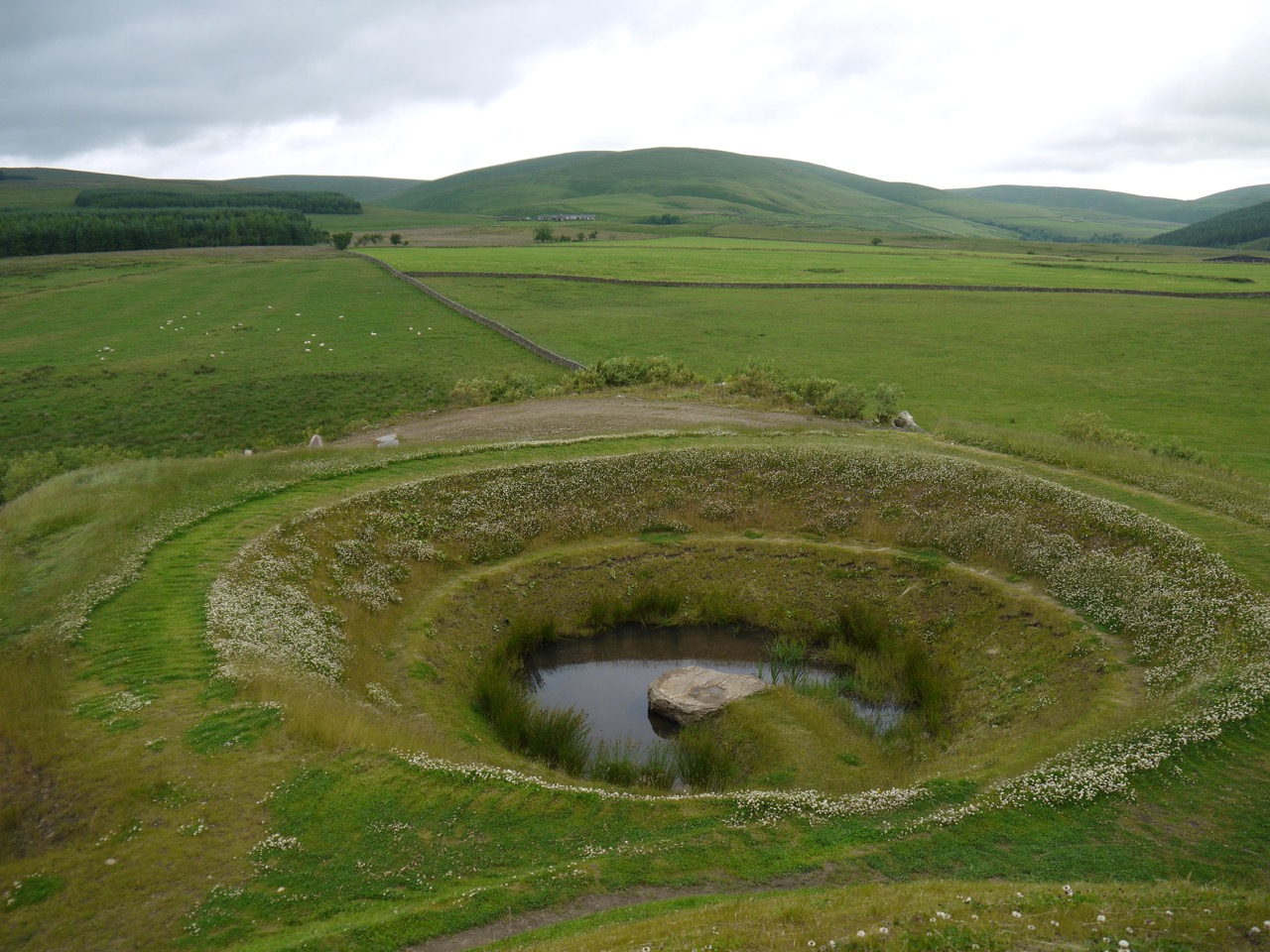 The Void is a hollow with a pond at the bottom and a large rock to stand on. Like Birdshit Rocks it is accessed by a spiral path. The banks of the dip were covered with white clover which was far more impressive from inside than from above for some reason. The water of the pond itself was gently rippling which at first made me think that the rain had arrived, but a closer look showed that the ripples were from waterboatmen. As I leaned in to take a close look the insects dipped below the surface and swam under the water, something I hadn’t noticed before. Audrey hadn’t thought to bring her swimming costume which is probably for the best since I have read that waterboatmen can give a nasty nip.

The next landform on our route was a little way beyond the Void, the Northpoint Shelter which I felt was aesthetically spoiled by having a rope around it. Then we headed for the two large Galaxy mounds, Andromeda and Milky Way which had been slag piles that have been landscaped with spiral paths built around each. (PS I thought such things were more correctly called spoil tips.) They are grassy which contrasts with their rather stark surroundings, which are labelled “Desert” on the map. Each mound has a stone circle at its summit. 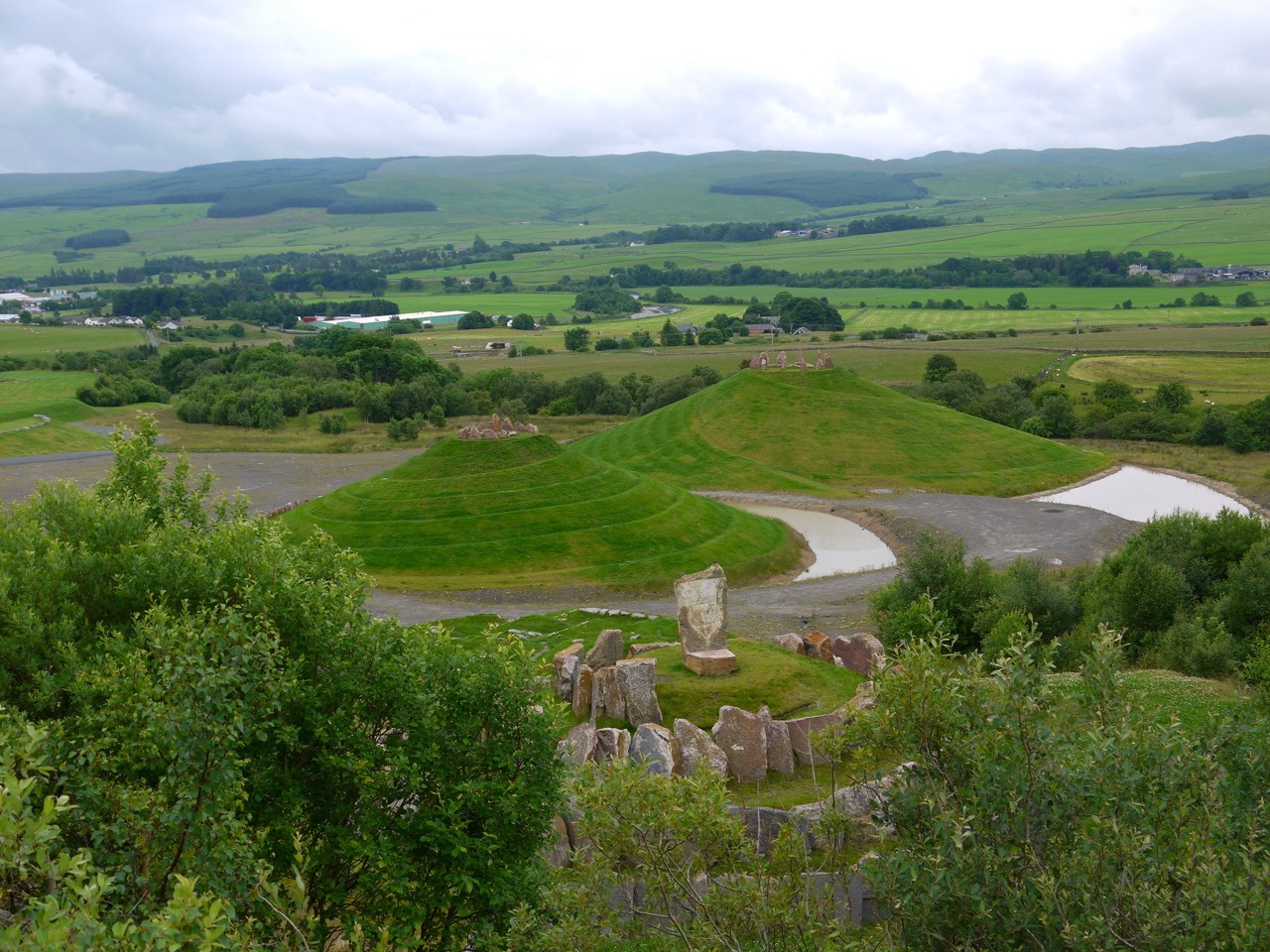 Between these Galaxies we went to explore to remaining mine face on the north wall where I was hoping to find some coal, but the rocks didn’t look as if they could contribute much to a fire.

Our wanderings took us next through “Supercluster” which from a distance had the appearance of a small crazy-golf site, but is said to be a collection of abstract triangles and “gravity rivers” representing the larger collection of galaxies which includes Andromeda and the Milky Way. I cannot say that I would have drawn that conclusion if I hadn’t read it on an info board. From here we walked up to the rock circle that gives its name to the whole area, the Multiverse. 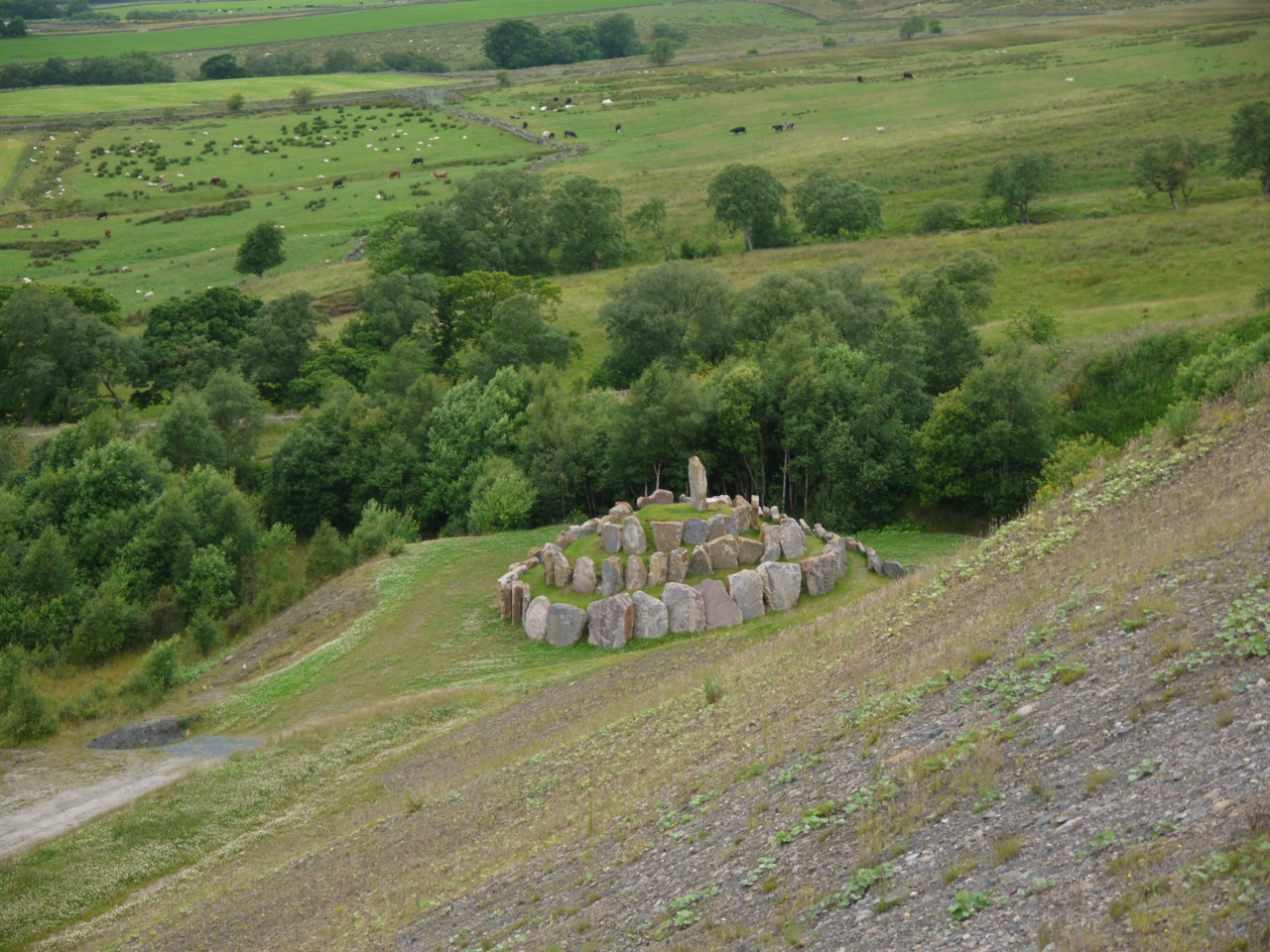 The Multiverse has rocks inscribed with representations of changing gravity levels, complexity and types of universe, but caught me out in that I expected the path, which is described as a corkscrew, to lead in a spiral to the top. The upper stone circles though are complete and one must scramble up between the rocks to reach the top.

The rain which had been forecast reached us while we were experiencing the Multiverse. One person donned a waterproof jacket while the other discovered she had left hers in the car. Luckily it was only light rain.

Next, the Omphalos, which given the benefit of a classical education I knew to mean navel. The Crawick website explains “This stone representation features v-shaped silhouettes which frame the cliff scallop overhead, while on the inside, special rocks signify the mythical and actual centre of the Earth.” Bollocks. 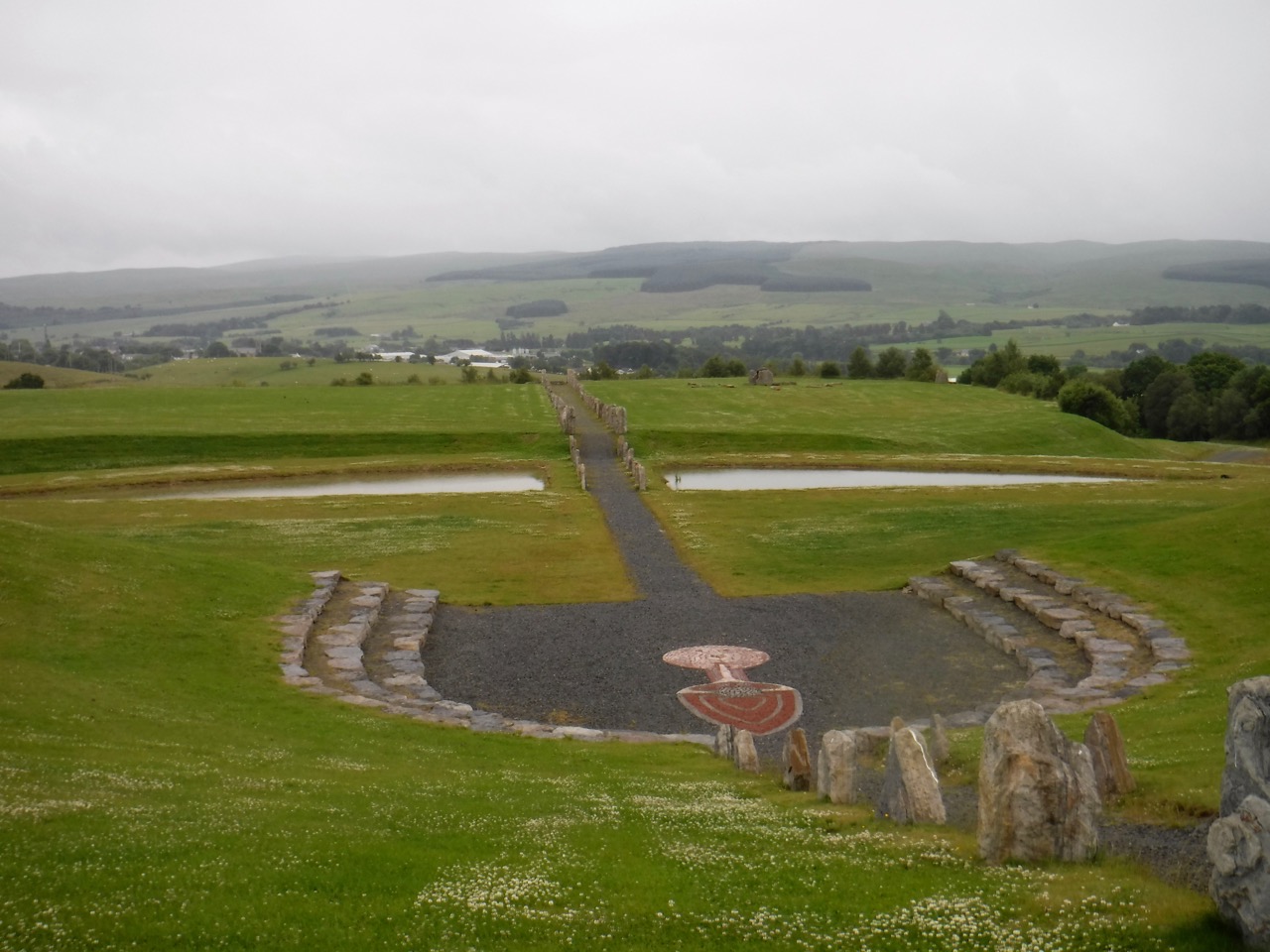 As we stood looking along the North-South path, lined with standing stones, overlooking the amphitheatre and the flat area beyond it with its lagoons and comet shelters, I was forced to reflect that something was missing. I thought of Tolkien’s creation story for dwarfs. They were created in secret by a demigod who wanted children with whom he could share his skills, but they did not have the gift of independent action with which the Creator planned to place within elves and men.  The Creator found out about the dwarfs and ordered they not awake until after elves and men, but offered to give them the spark of life. The multiverse has the feel of a creation which has not yet been imbued with a soul, or if it has such a soul, it is not yet awoken. It felt like a void, especially compared with the area on the eastern and southern edges of the site where wildflowers are carpeting the ground. 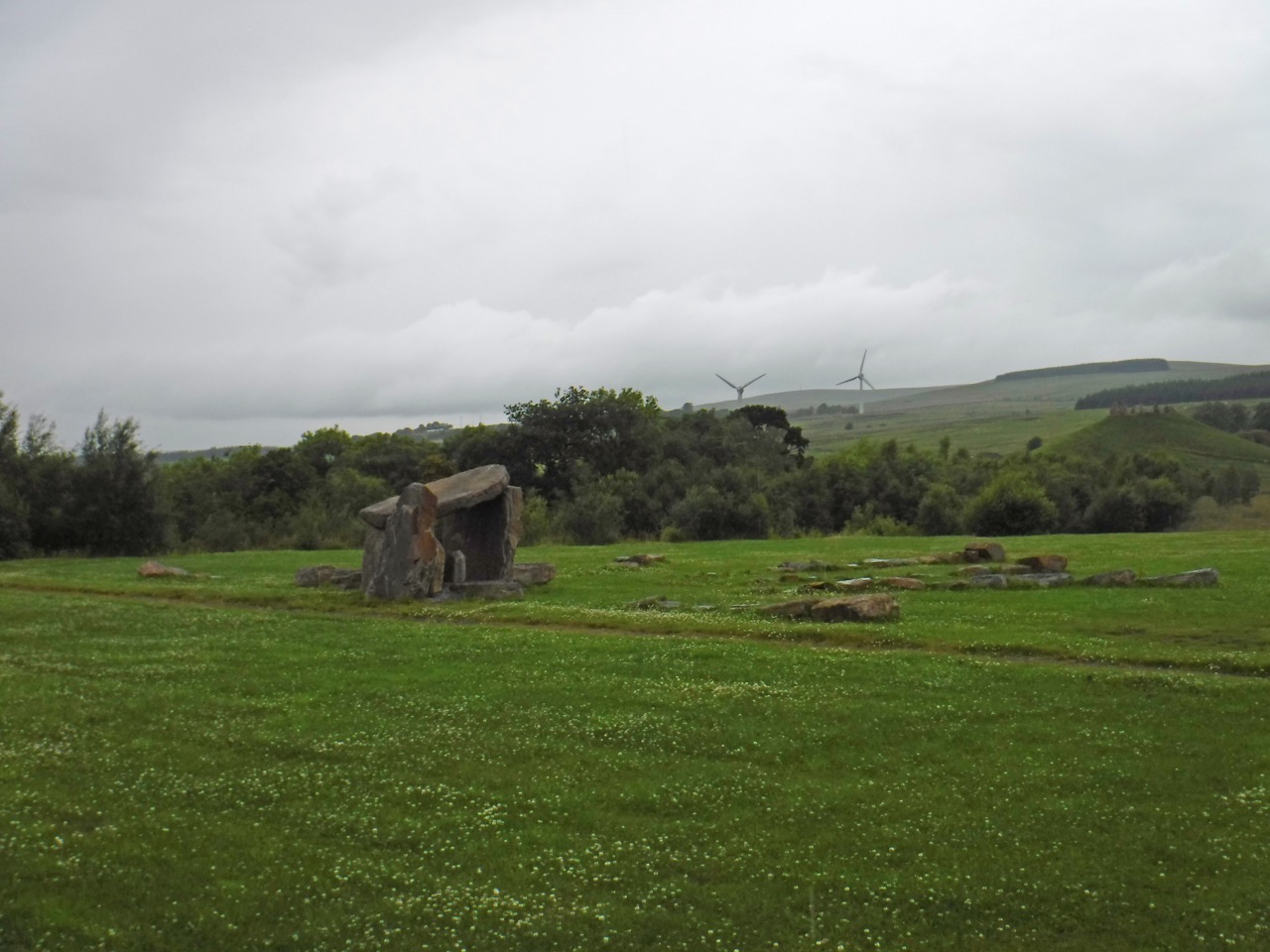 I might perhaps be prejudiced towards wildness since when I visited Charles Jencks Garden of Cosmic Speculation at Portrack, though impressed by the landscaping and installations, I left feeling a deep need to experience something wild. I drove from Portrack to Crichope Linn and was reinvigorated.

All that said, it is an impressive site and should be better known. It perhaps deserves more events or uses. It would be a great place for an outdoor concert except for the fact that it has a tiny car park.

Share this...
This entry was posted in Dumfries & Galloway. Bookmark the permalink.