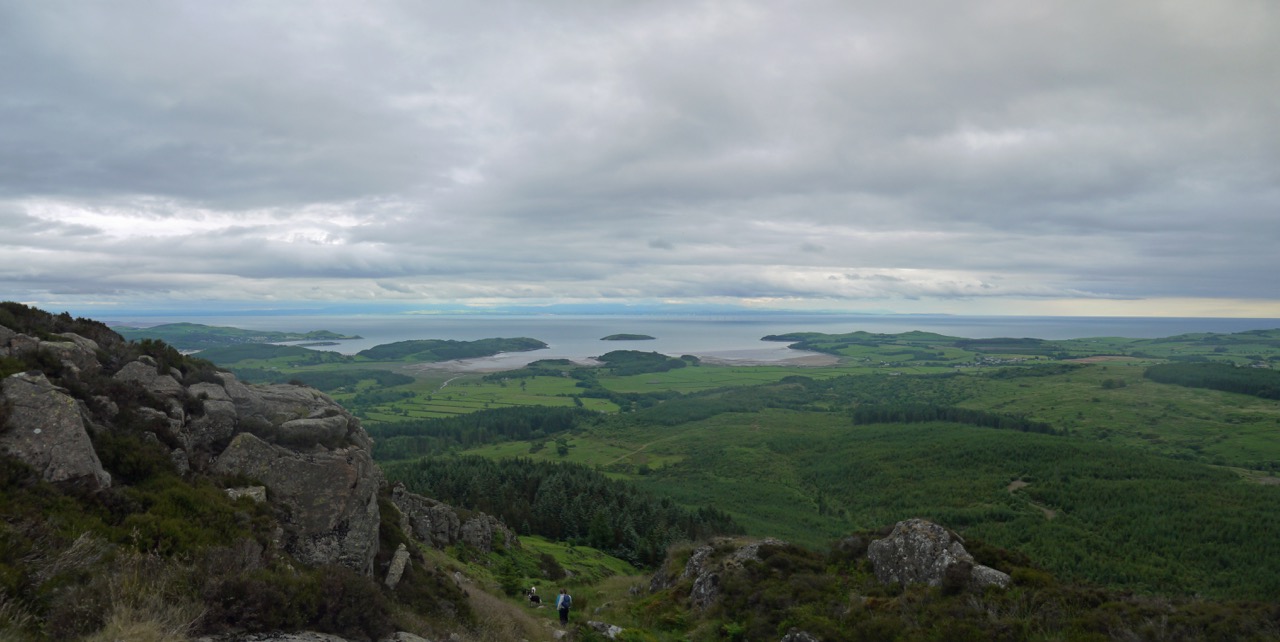 An evening stroll with the Rheumatology team, ID team, and accompanying dogs. The rheumatology team showed their navigational and logistical skills arriving at the agreed rendezvous in good time, then kicked their heels for what seemed an interminable time waiting for the tardy virus-wranglers.

Our convoy, once assembled, sped (within the legal limits) out to Screel Hill, with the walkers rearranged into fewer cars, so doing our bit for global warming. At the wee car park below Screel we grabbed our walking gear and let the dogs meet each other.  Luckily they were very well behaved…none of that embarrassing humping.
[osmap gpx=”http://www.screel.co.uk/walks/wp-content/uploads/2016/06/RK_gpx-_2016-06-16_1802.gpx”] 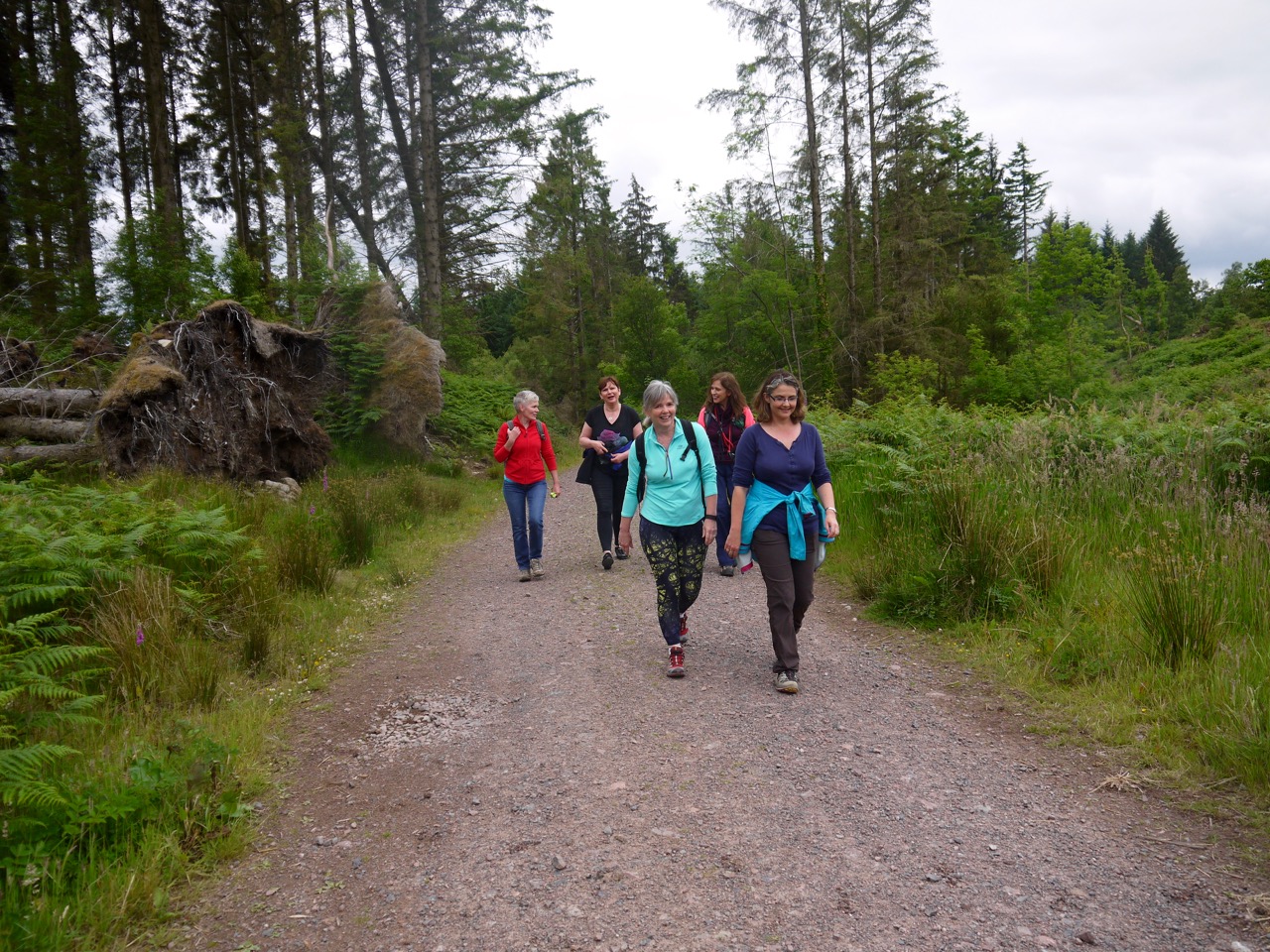 Eddie started as he meant to go on by jumping into some dirty water and the shaking it all over me. I suppose the white top I was wearing was just too much of a temptation. We humans stayed on the forestry track, and after an easy stroll, Anne who had taken the lead, took us off the track and up the slightly steeper and rocky section that would once have been woodland but is now cleared forest. This spread out the group like a serum sample in gel electrophoresis, with  at the front and at the rear, a pattern that was to recur several times. The dogs ran back and forth along the line, possibly exhibiting a canine desire to herd us back together.

On reaching the forestry track again, those who had sped through the metaphorical gel halted and the long line reformed as a tighter grouping. The paradoxical but rather common behaviour of those finding the going most difficult and therefore bringing up the rear getting the shortest rest for recovery was duly enacted. But unlike a previous work’s outing we didn’t leave anyone behind this time.

Rested, some more than others, the group set off along the Glen of the Screel Burn first on a forestry track and then on a walker’s trail as we climbed further. “Great tits” I exclaimed (stress on ‘great’, and therefore quite innocent), drawing the group’s attention to the characteristic squeaky-pump sound these birds make.

The views gradually improved as we climbed and it became obvious that visibility, at least to the south, was excellent with the English Coast clearly visible out to St Bees Head. We could also see the Isle of Man on the horizon. 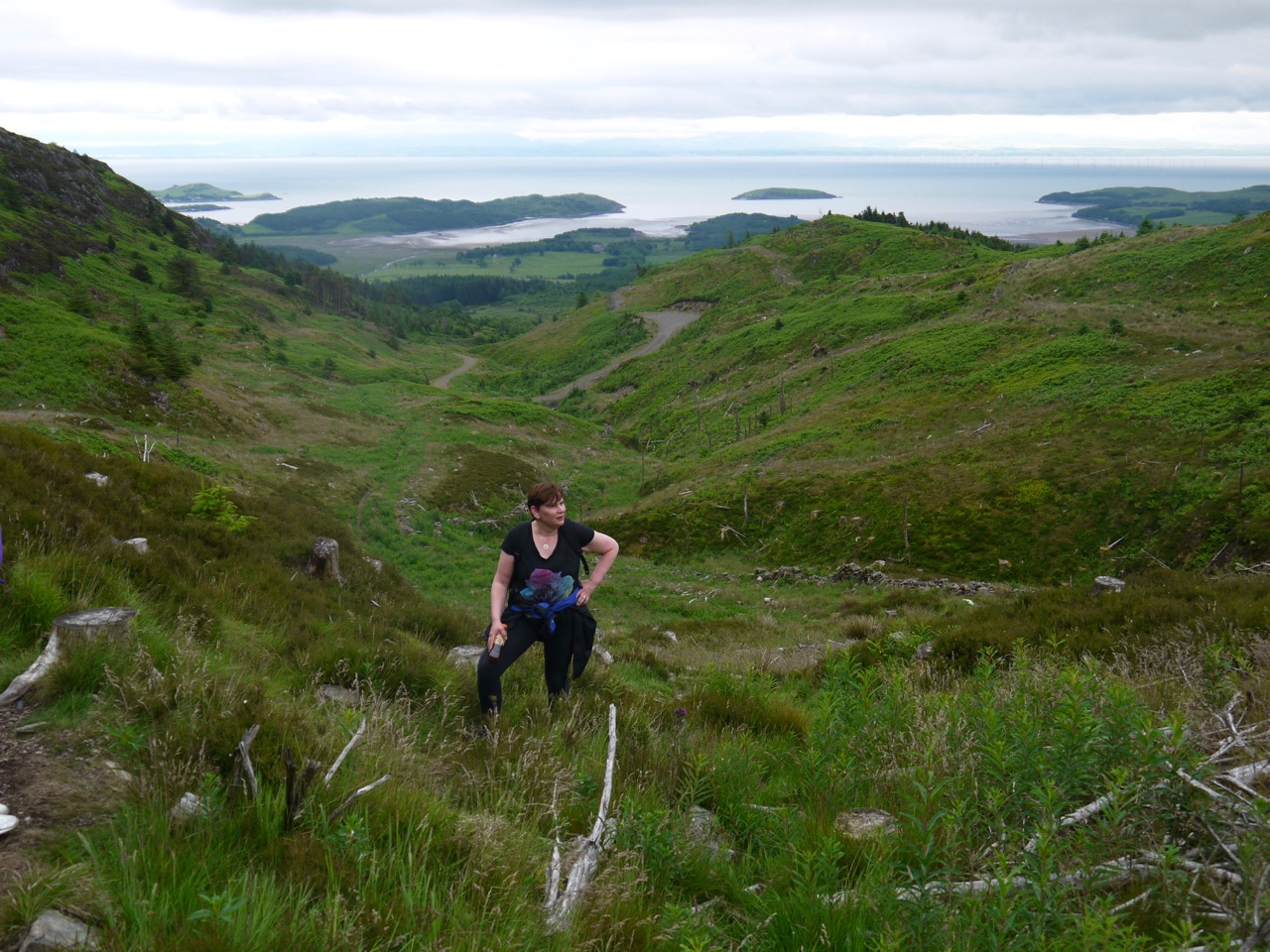 Glen of the Screel Burn

After burning a few calories (25 perhaps) we reached the short rocky scramble to the top and made our way up, though some, such as Sweep, needed help with a bit of push on the rump. Having said that, he then ran back down and then seemed able to get up unaided the second time. 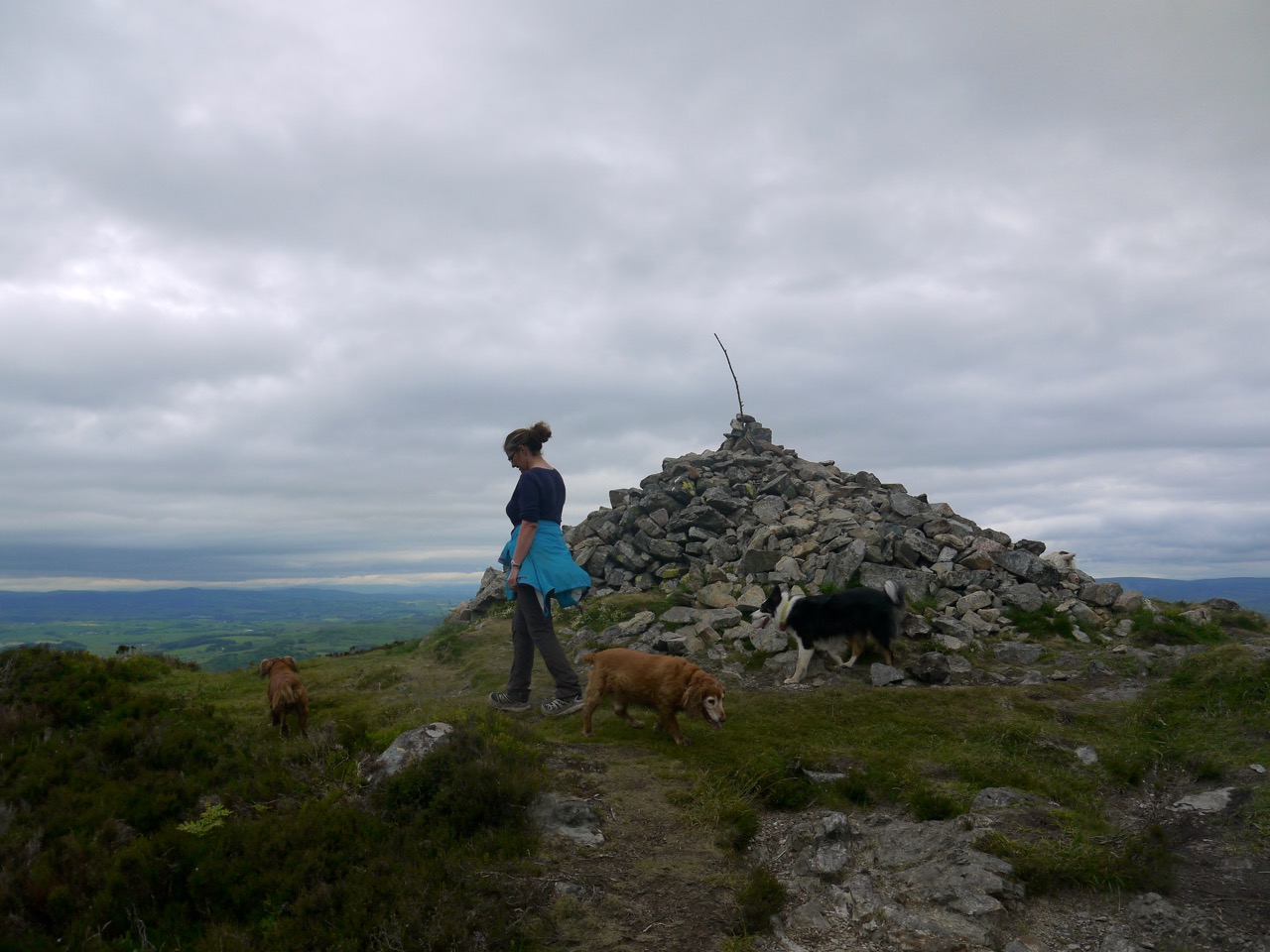 It would be wrong to reveal who got to the summit first, but the camera never lies. 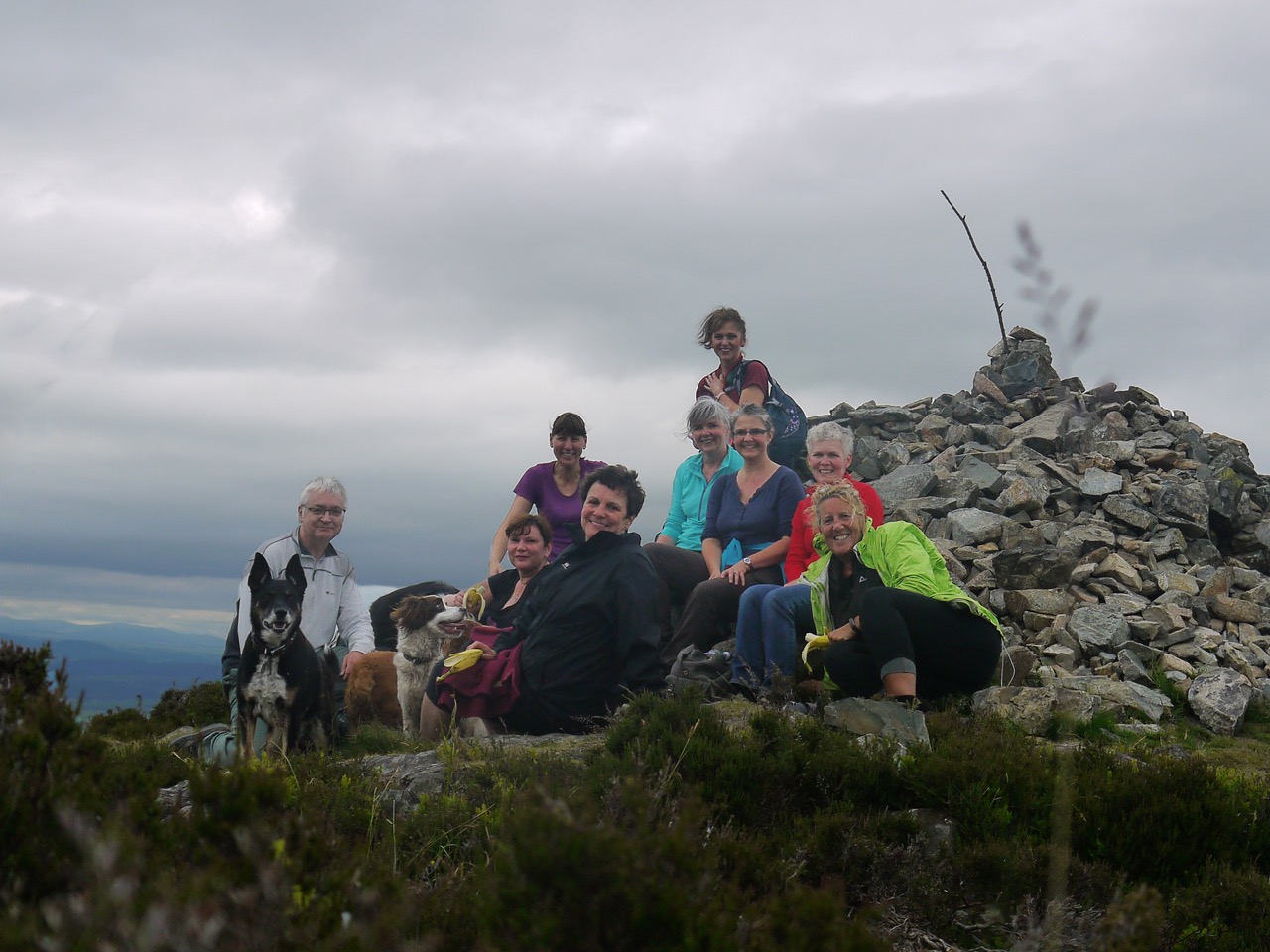 There were good views from the summit with Cairnsmore of Fleet and Moorbrock Hill shapes quite recognisable. We had our photographs taken at the summit cairn then tucked into snacks. I had tried to emulate the famous Dr Jim Lawrence, who had brought an apparently inexhaustible supply of apples and tea for everybody on a previous visit but was probably a little short of the mark since I only had half a dozen apples. 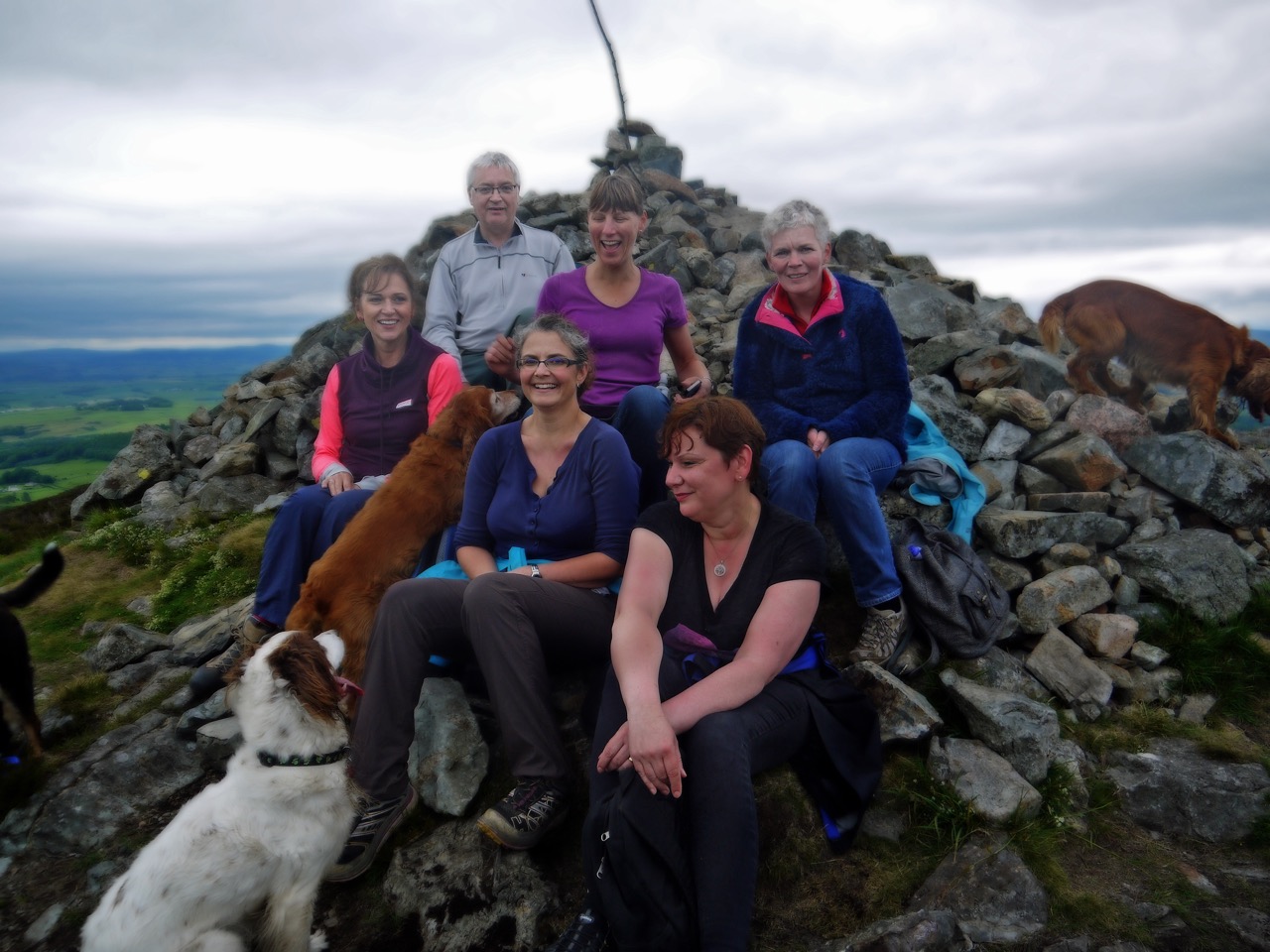 I had a couple of Pink Ladies at the summit, and marked the occasion by adding a stone to the cairn. Our revelry was eventually brought to an end by Eddie transitioning into barking dog mode when some runners arrived with their dog. It was time to move on. 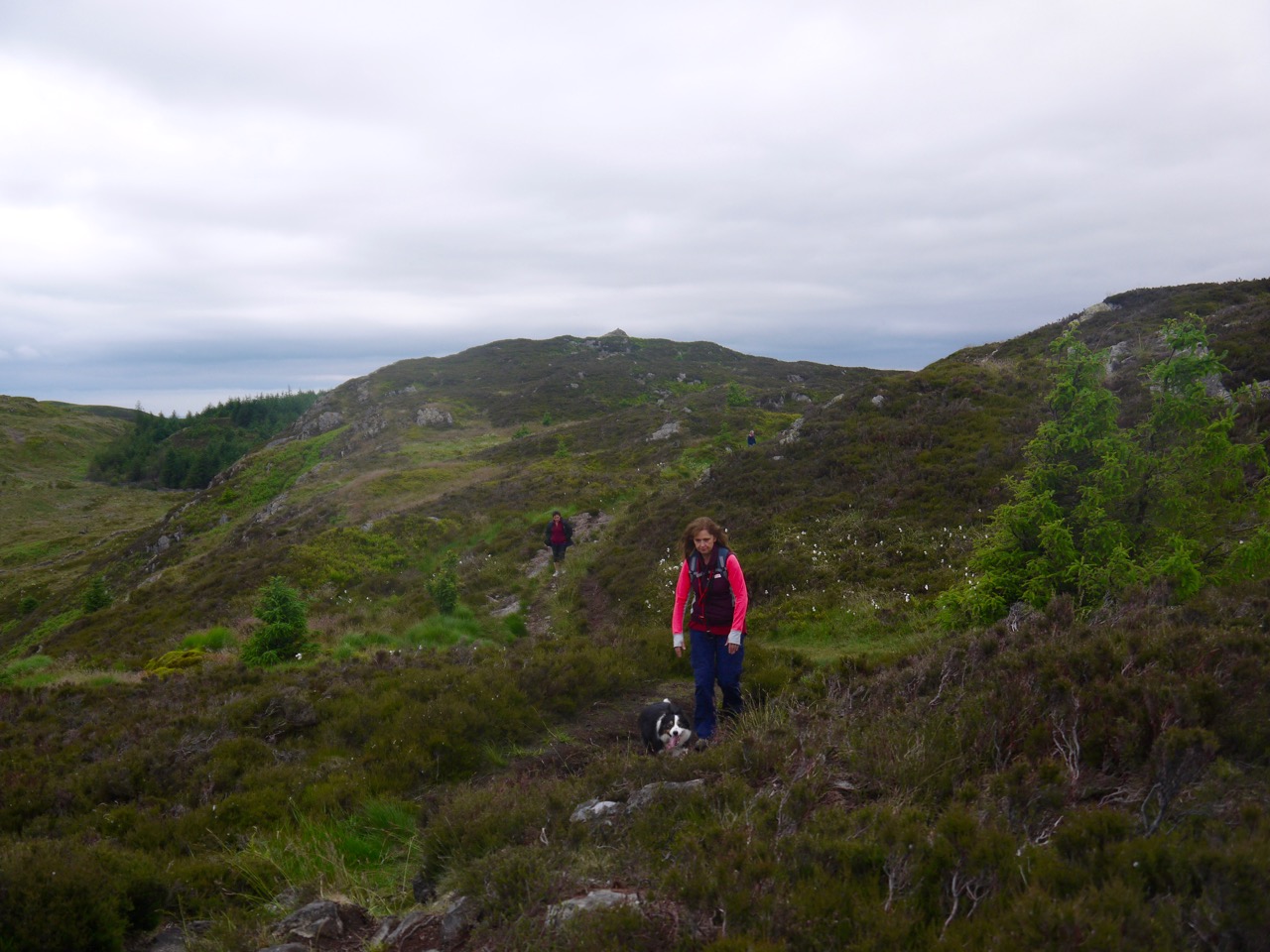 Spread out along the top

The bog cotton was out on the hill giving a clue as to its terrain. The path though was less muddy than I have known it. Eddie made the most of what mud remained by jumping into deep pools, only just managing to extricate himself on a couple of occasions. More mud was shaken off but I was able to keep my distance this time.

The sounds, sights and smells were worth fixing in the memory. We were treated to the “sunshine translated into sound” birdsong of a lark circling above us, the green of the bracken seemed especially bright, either a trick of the evening light or the fact that the plants are newly unfurled, and honeysuckle growing in the undergrowth gave the hill its scent. 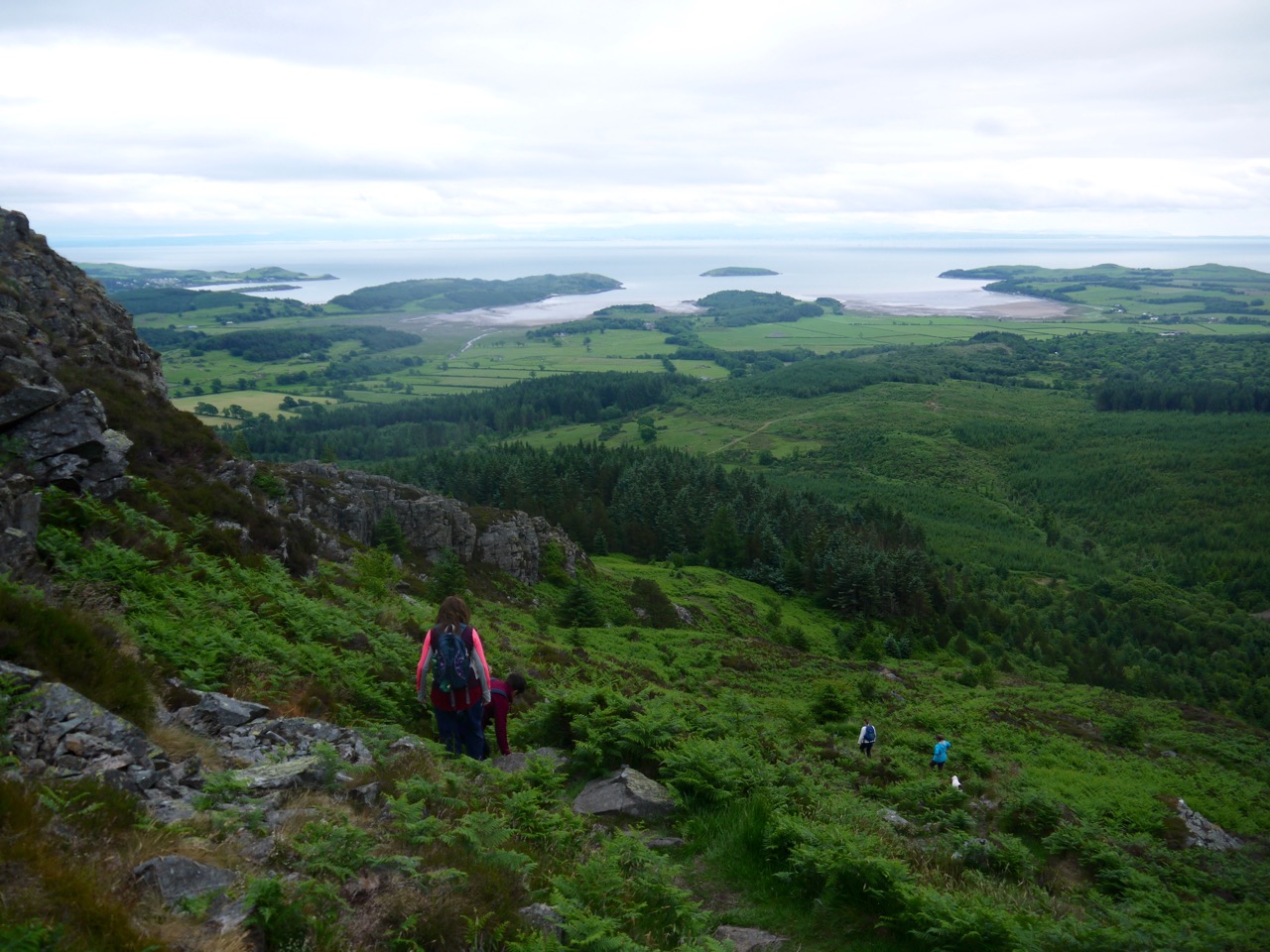 Descent through the bracken

Having gathered at the southern end of the hill we looked at the views then began to pick our way down the rocky path as it wound down through the bracken, taking extra care with our steps when the dogs were running past.

After the bracken we entered the enchanted forest section, carpeted with pine needles. My tree identification skills were mocked here…and I have updated the grudge database accordingly. (And lest you forget…single needle=spruce, paired needles=pine, lots of needles=larch. New growth like brushes=spruce, new growth like candles=pine.) 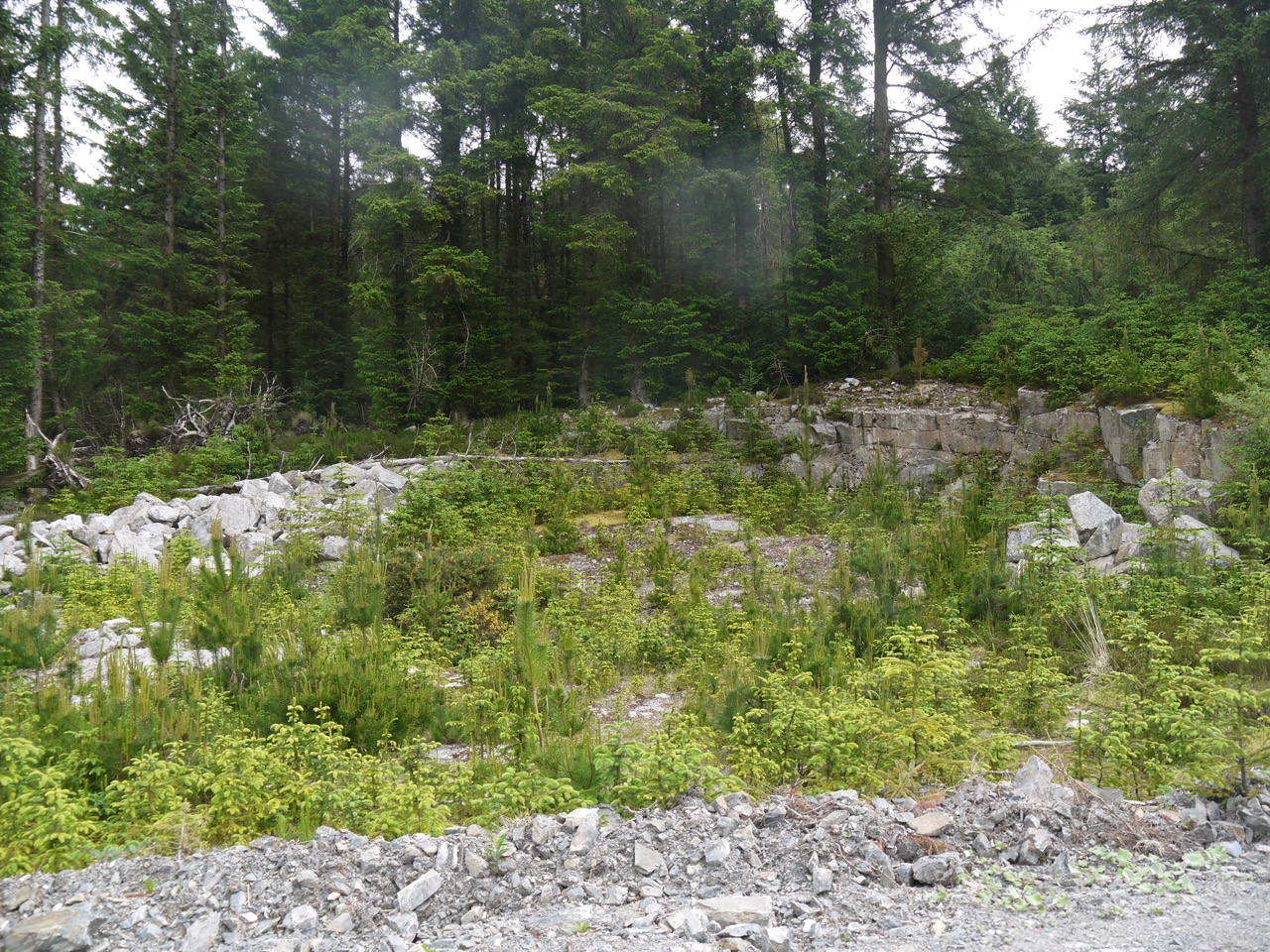 Ingrid and Petra were on the lookout for forest fairies, but saw no dryads. I’d have thought the dogs would scare them away anyway. The way through the woods was clearer than the last time I was here and there were only a couple of places where fallen trees blocked the path. Most of us clambered over these sacrificing any attempt to look cool. Wonder-woman, of course, just jumped over. 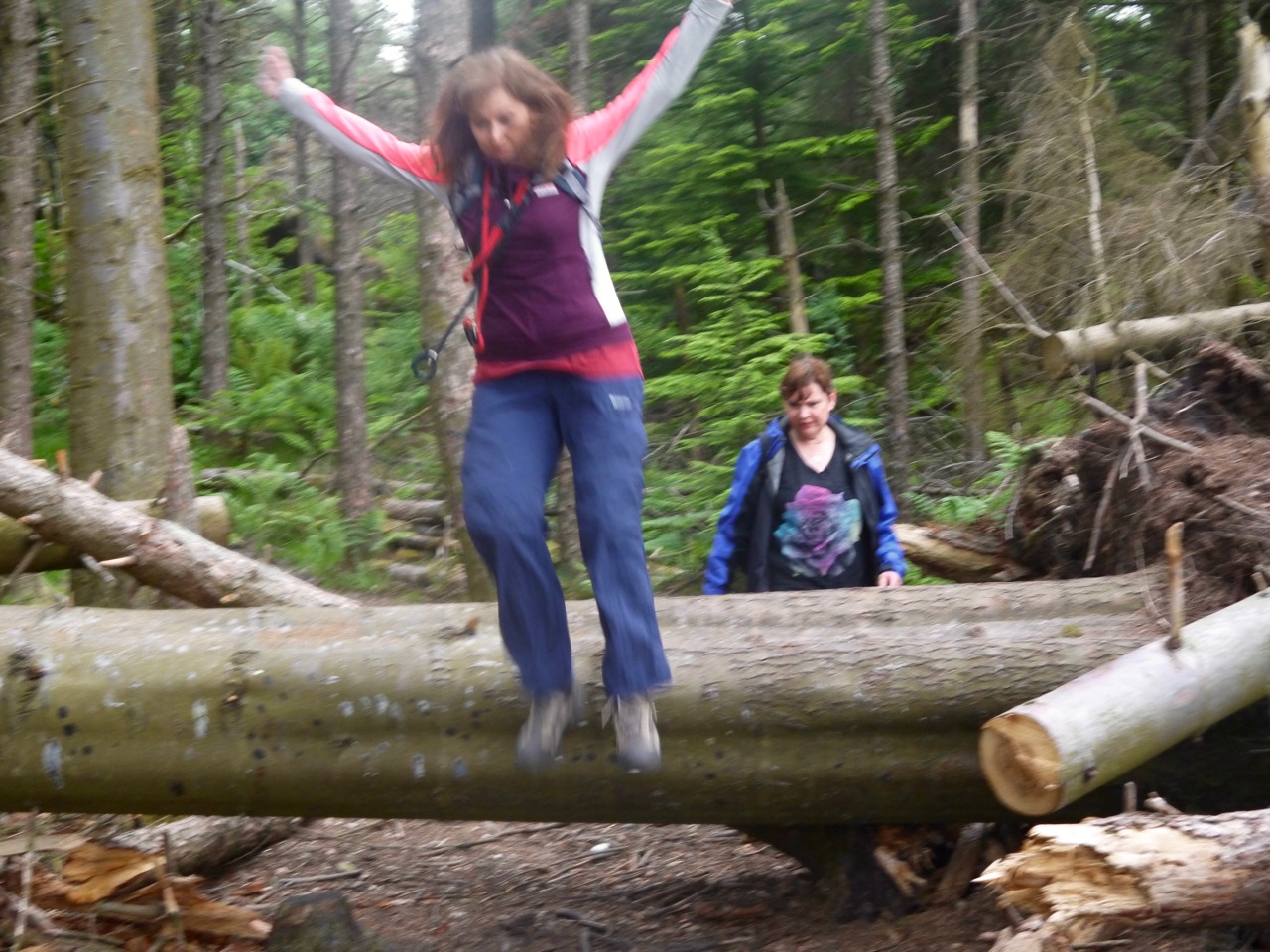 We had good weather for walking our local miniature mountain. The hillside was alive with bracken and the bell heather was just starting to flower, I counted 40 species of wildflower if one counts bog cotton as a flower, otherwise it was 39. There were great tits to hear and a call from another bird further up the hill that sounded like a wheatear, as well as the song of a skylark. And great views.  Cairnsmore of Fleet next? 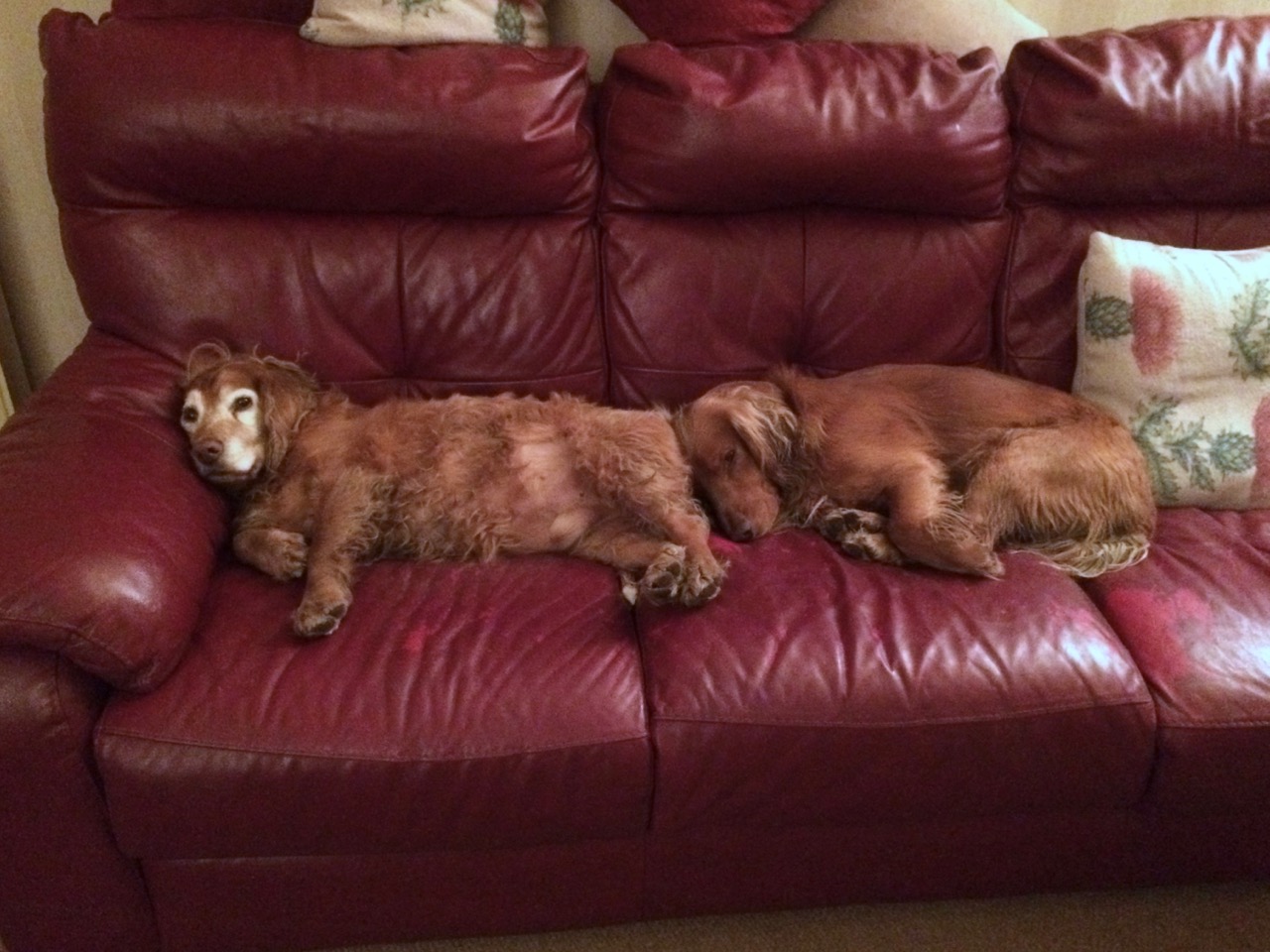 Share this...
This entry was posted in Dumfries & Galloway and tagged Wee Hills. Bookmark the permalink.

4 Responses to Larks on Screel