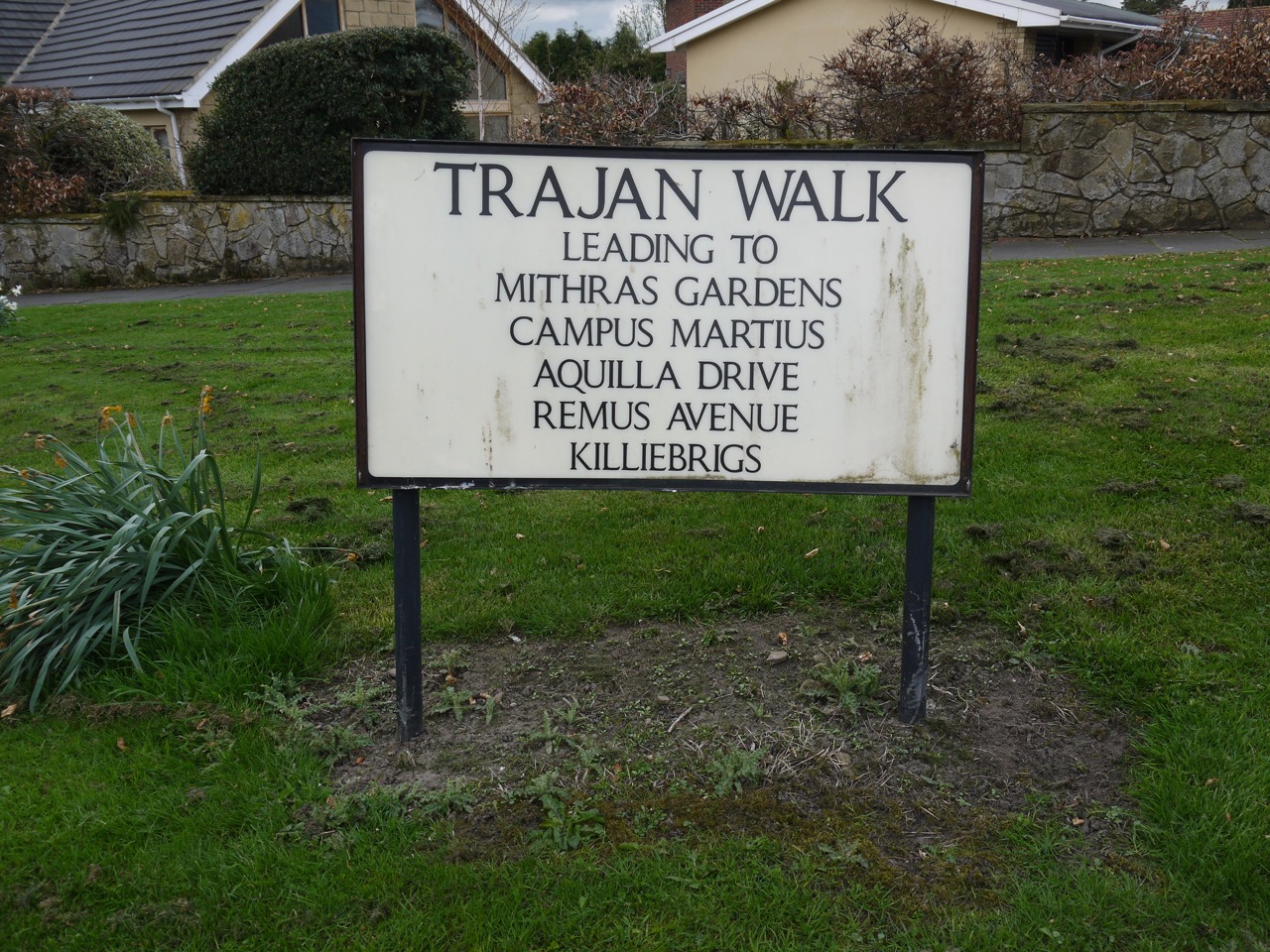 This was a walk of three halves, and I am not referring to beer. The first half was dry with a chilly breeze, the the first half of the second half was cold enough to need jackets and hats and the remainder was wet, but warmer.

We parked by the river in Tyne Riverside Country Park and walked up to the Keelman Pub to get a taxi to the start. When I had looked at the route beforehand I had been left with a feeling that we would be walking mostly downhill, but once on the ground there were undoubtedly some sections with a gentle ascent.

If the last section had seen the celandine blooming, it was the dandelions that were putting on the show this time. There were plenty of red dead-nettles and some white dead nettles. 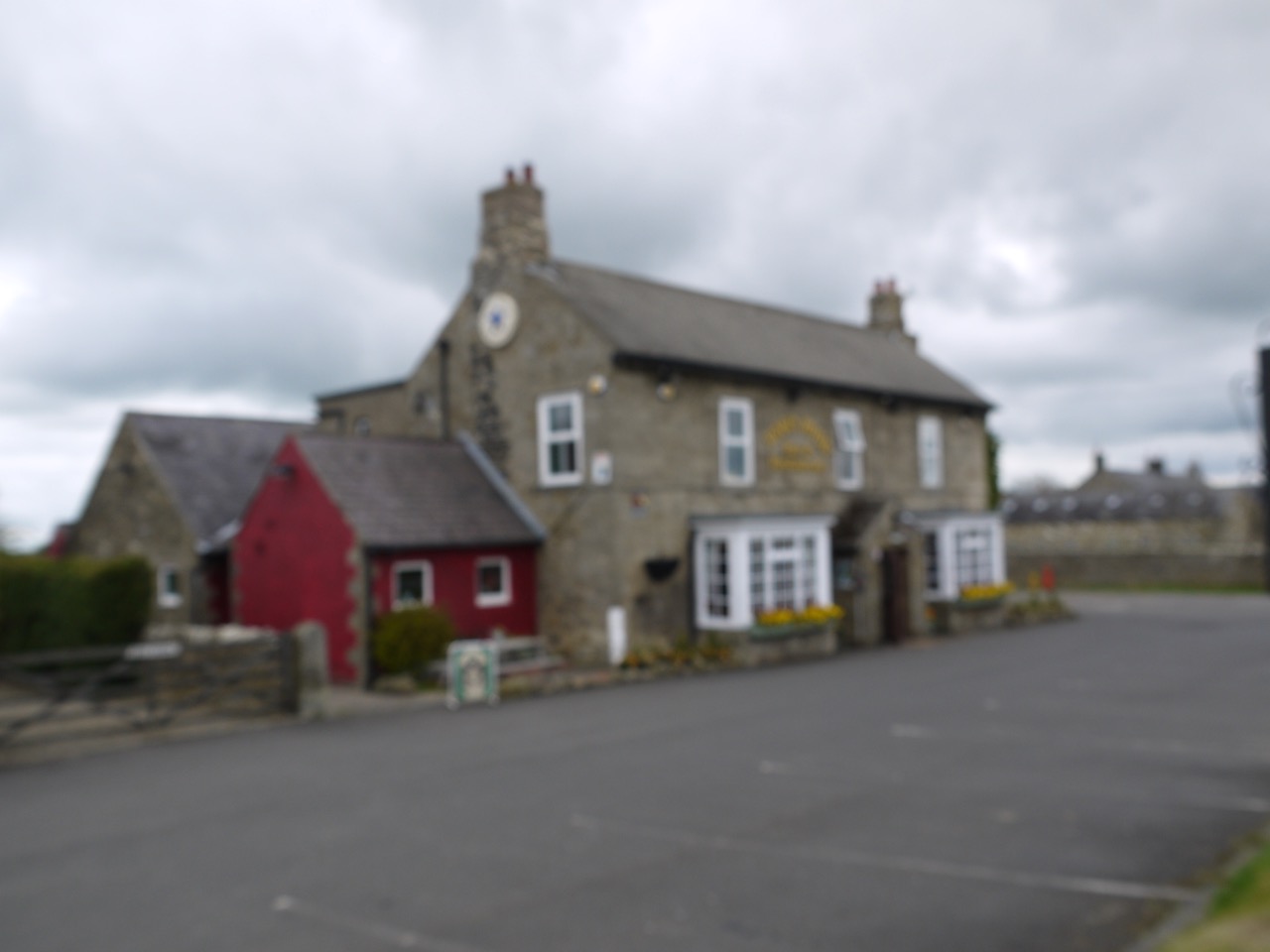 The taxi driver had told us that the Robin Hood pub had been where some pub scenes from the Likely Lads had been filmed, but it was blurred so we couldn’t go in for a drink. 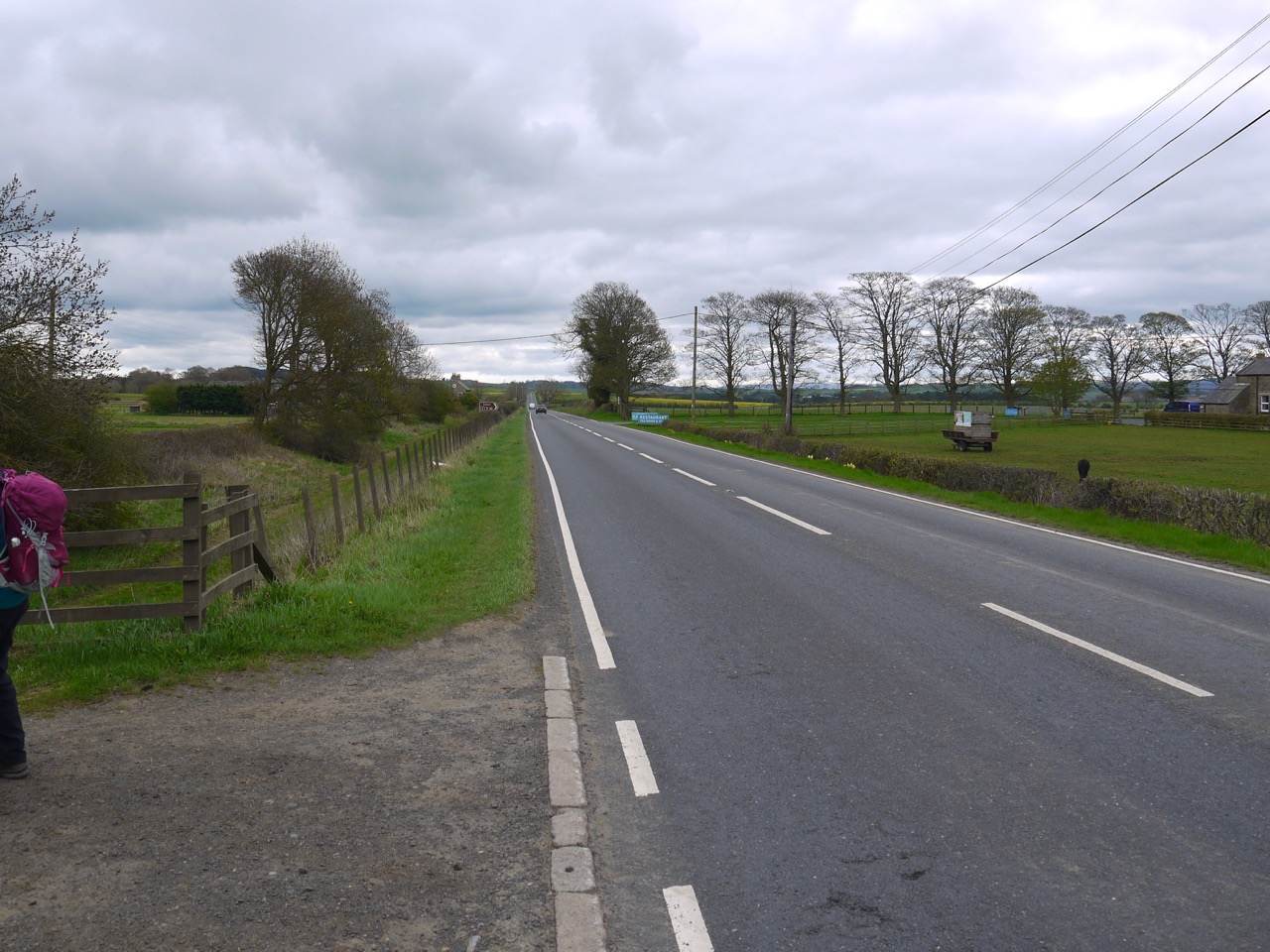 This section is beside the B6318, which follows the route of Hadrian’s Wall, as far as Heddon-on-the-Wall where it leaves the route of the Wall to descend Heddon Banks and then follows the Wylam Waggonway beside the River Tyne. Initially there is still some remnant of the Wall in the form of a ditch, but no mile castles or Turrets remain here, though there is long section of surviving wall at Heddon-on-the-Wall.

Much of the day was spent walking along the edge of cultivated fields or fields with sheep. There were hedgerow flowers aplenty with primroses, cowslips, and dead nettles red and white. 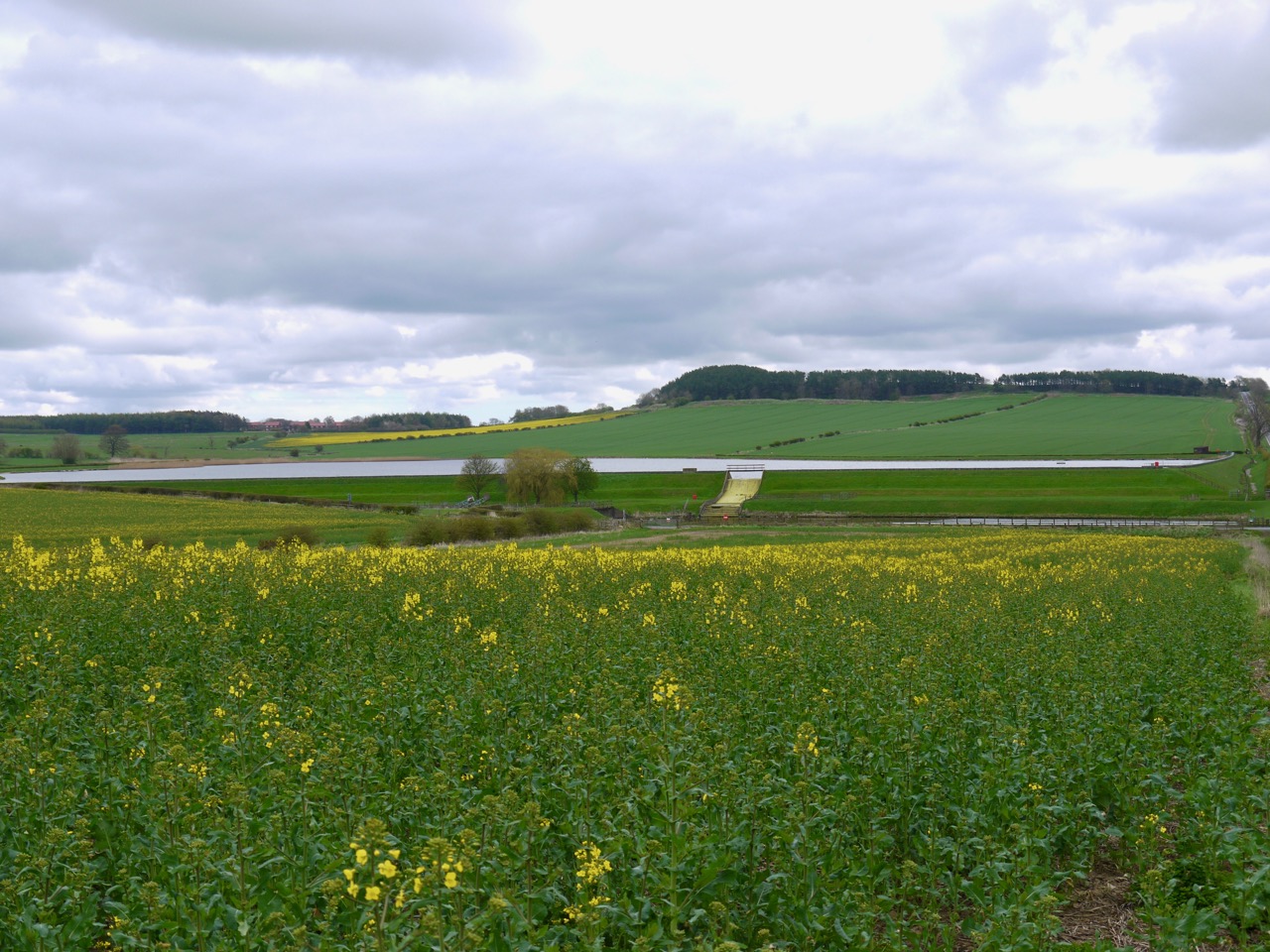 From Wallhouses we walked down to the reservoirs at Whittle Dene. There were carpets of butterbur growing close to the water and cowslips on the grassy banks. Fences made getting access for better views difficult and signs warned against trying to do so. These reservoirs were built in 1848 to provide Newcastle with a regular, clean supply of water. Prior to their construction the city’s water had been pumped by windmill from flooded colliery workings. 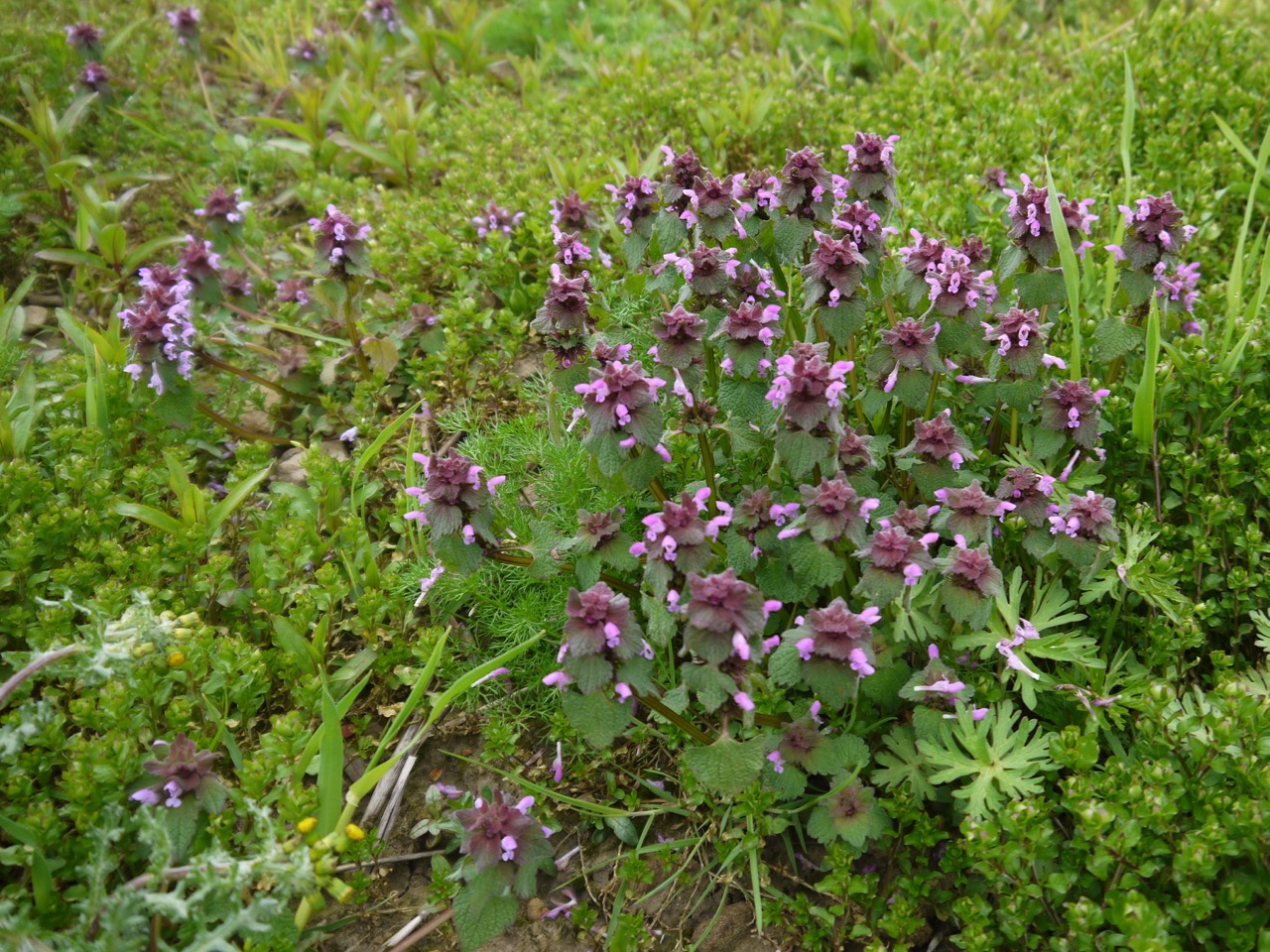 There was then a gentle ascent to Harlow Hill, once the site of milecastle 16. A sign at some holiday cottages here confused me a little. It read “Harlow Hill, No Boundaries, MXVI”, and I spent quite some time wondering what had happened in 1016. It was the year Æthelred the Unready, the last monarch buried at St Paul’s, died and that Canute invaded England, but I couldn’t see the link with Harlow Hill. Then the penny dropped…MXVI = Milecastle 16.  But I’m none the wiser as to the lack of boundaries alluded to. 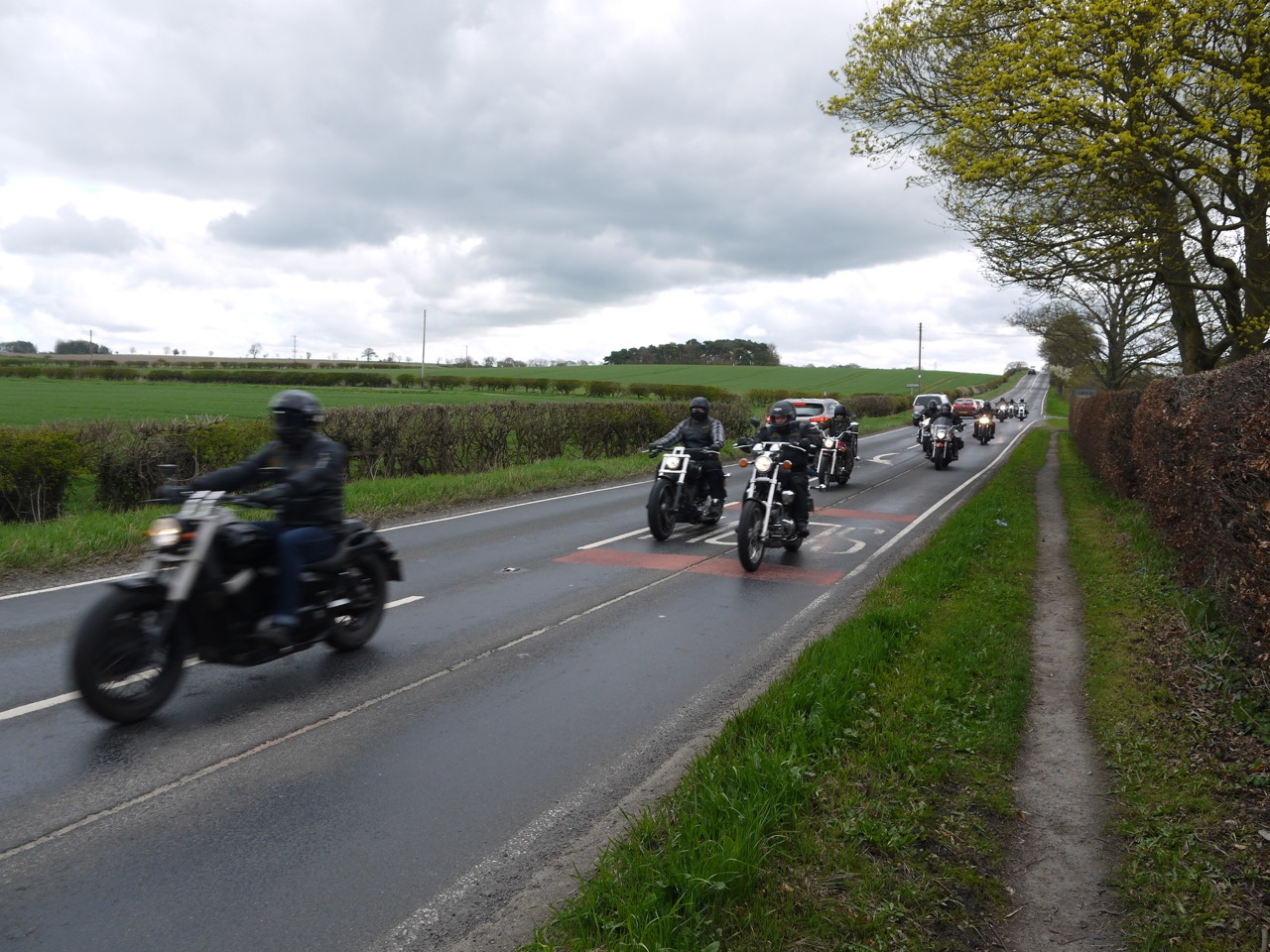 We walked on towards Eppies Hill, passing the site of Milecastle 15 of which nothing remains, and past a gate with a large red metal heart with attached padlocks, each painted with a single letter, reading Indians Indians with 16/20 in the centre. God only knows what this means. 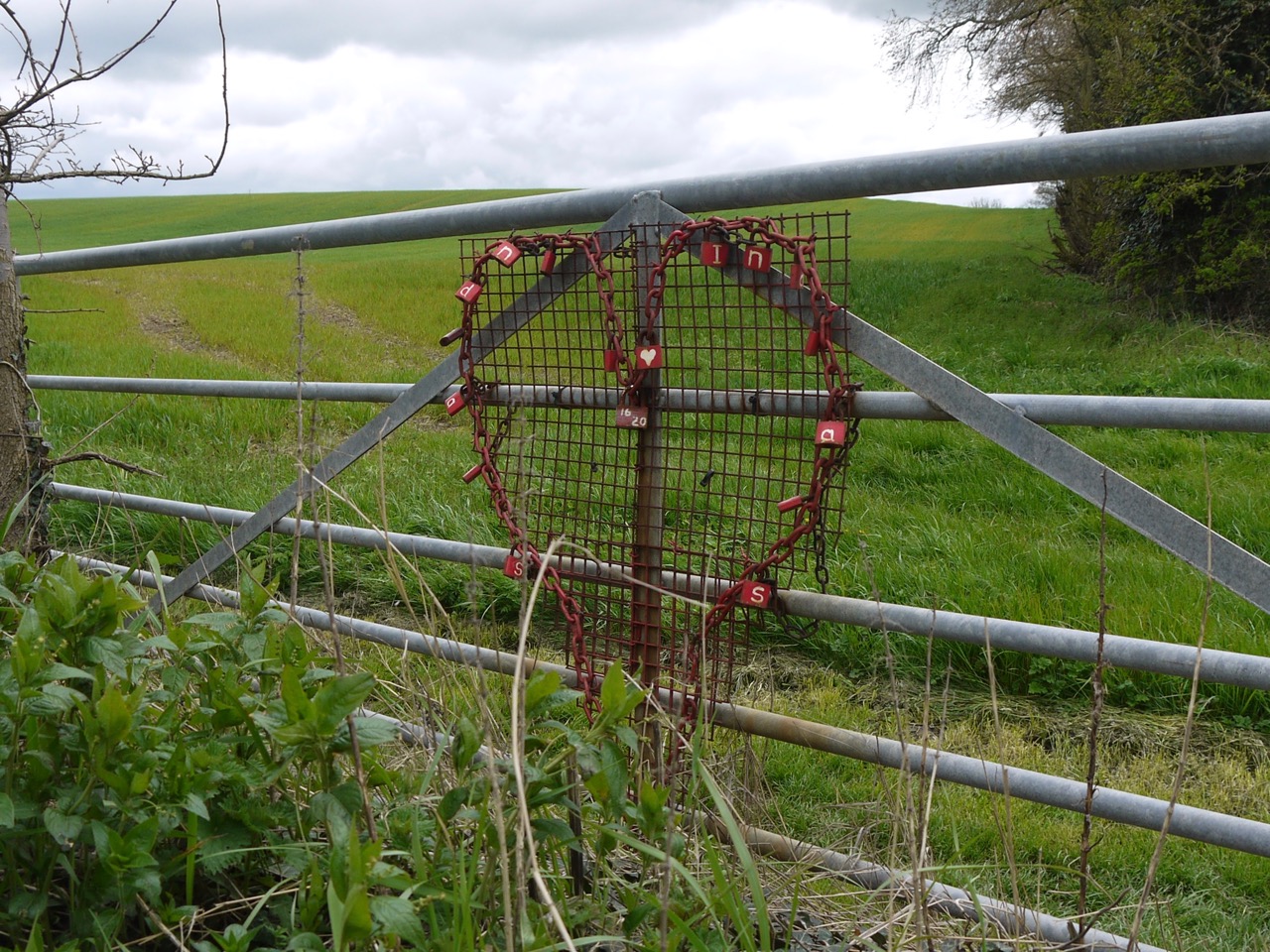 Heart on a gate

Above us we watched airliners descending into Woolsington having me crick my neck looking up at them while a long line of bikers in their leathers roared past on the road. 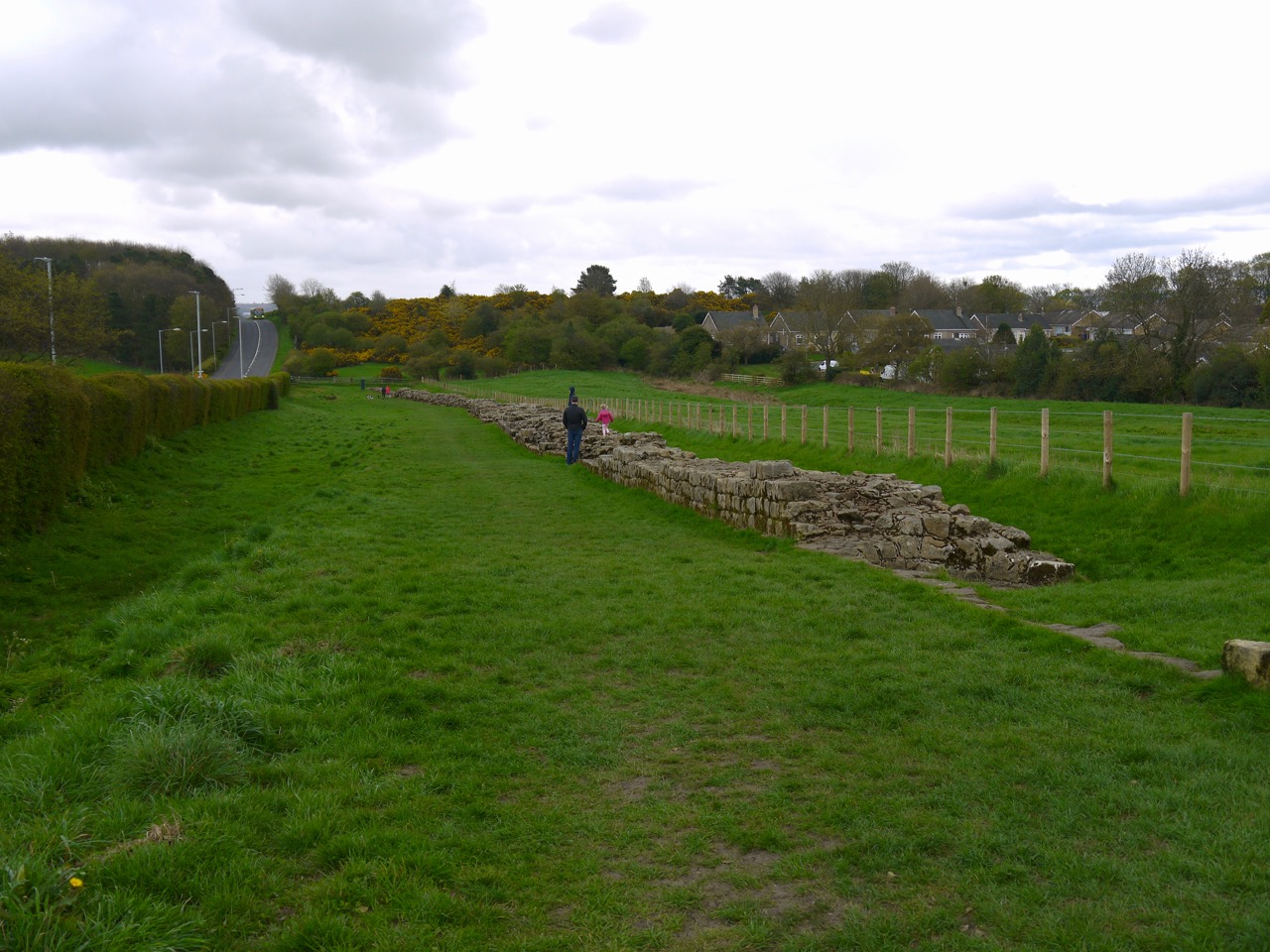 Wall at Heddon on the Wall

Heddon-on-the-Wall nearly had me going off piste. I was following the fingerposts but my attention was diverted by a guy walking his westie. He kept us on the right route (almost) and bumped into us a little while later to give us directions again. The Hadrian’s Way doesn’t actually visit the long section of Wall in the village, but it is only 60m off the Way. You would think the HWW would include it. 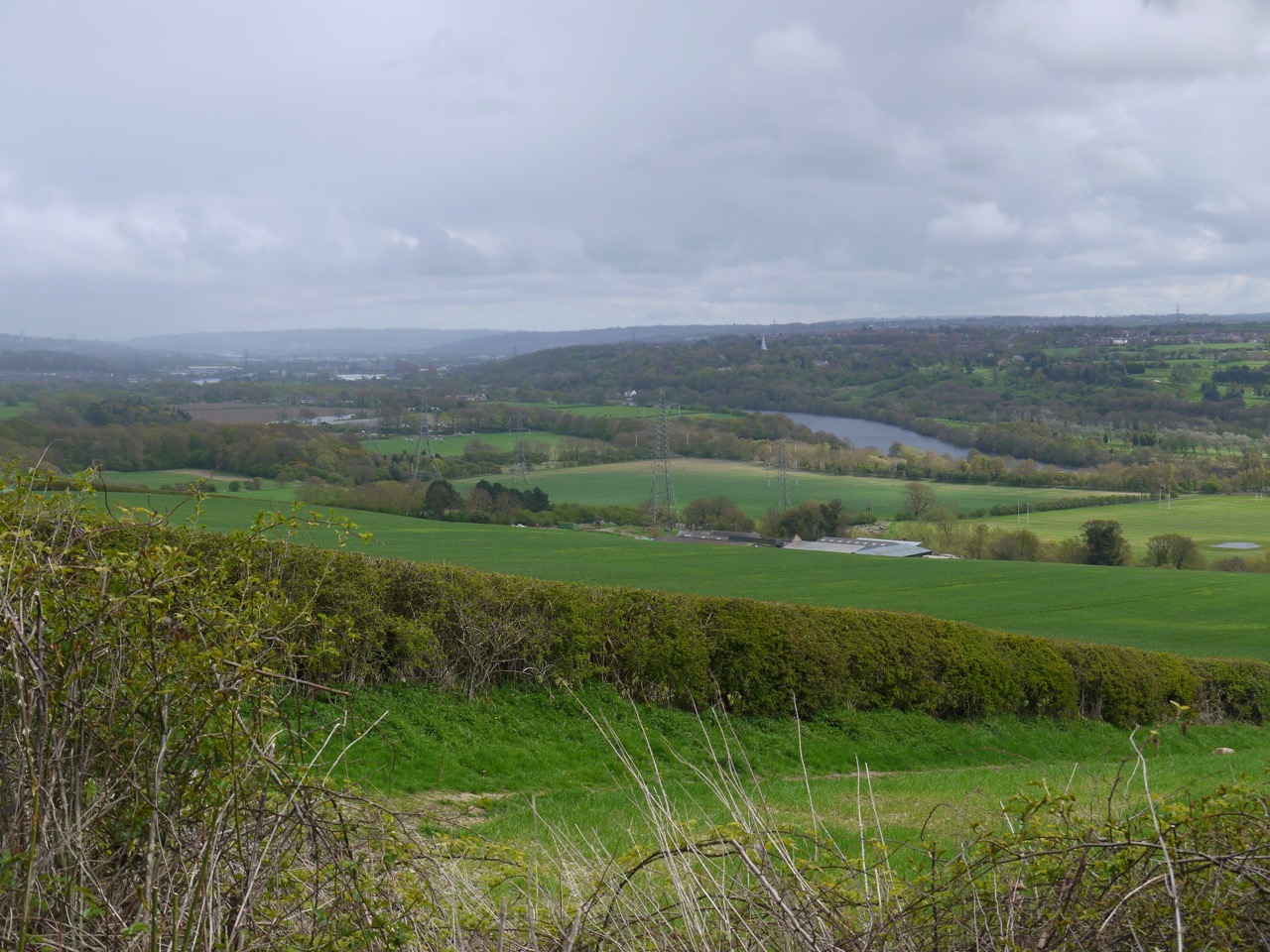 Looking across to Newcastle

As we walked down Heddon Banks we got our first glimpse of the Tyne, and I joked that it did look as if there was fog on the Tyne. But it wasn’t fog, it was rain and within a few minutes it had reached us and it stayed with us all the way to the end of the walk. There were bluebells beneath the trees and what looked like oversized C3POs peeping at us from a clearing. Actually an observatory. 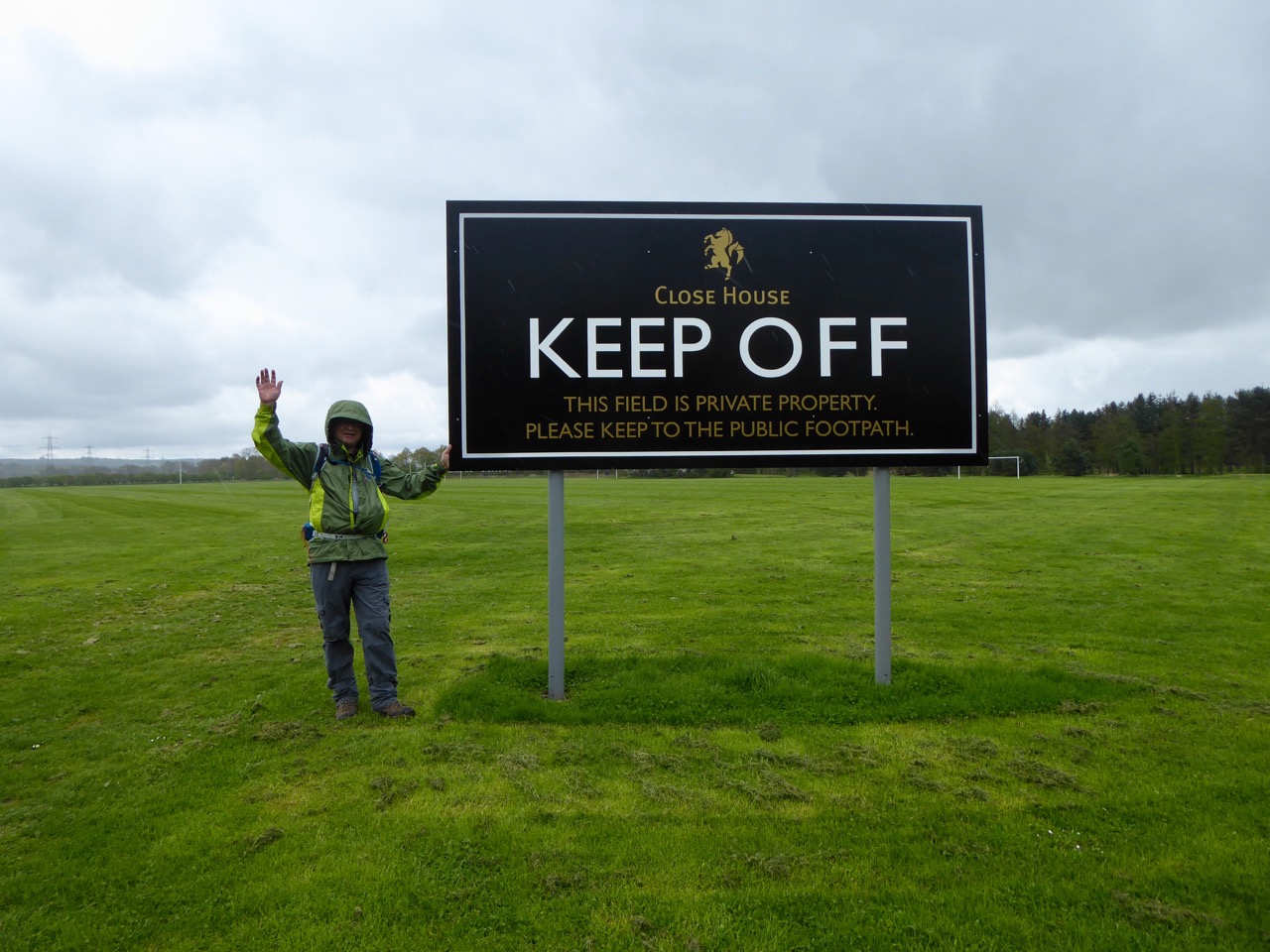 After passing a rather unwelcoming sign we joined a cycleway/footpath running along the route of the old Wylan Waggonway. The waggonway was built around 1748 to carry coal from Wylam Colliery to Lemington for shipment down the River Tyne. Originally the  wagons were pulled by horses along what were initially the wooden rails then from 1808 iron rails. During the Napoleonic Wars  demand for coal was high and the colliery owner wanted to improve the transport of coal. In 1812 he asked the Colliery Manager, William Hedley, to build a locomotive. By 1813 Hedley had a working prototype and in 1815 Hedley’s steam engines were established on the Waggonway pulling eight wagons compared to the single wagon a horse could manage. So Hedley produced his steam engine locomotive a year earlier than the better known George Stephenson. Both men were locals, Hedley was from Newburn and Stephenson’s cottage is close to the waggonway. William Hedley also had the important insight that coupling the locomotive wheels meant the weight of the locomotive alone would allow adequate grip between smooth wheels and smooth rails. 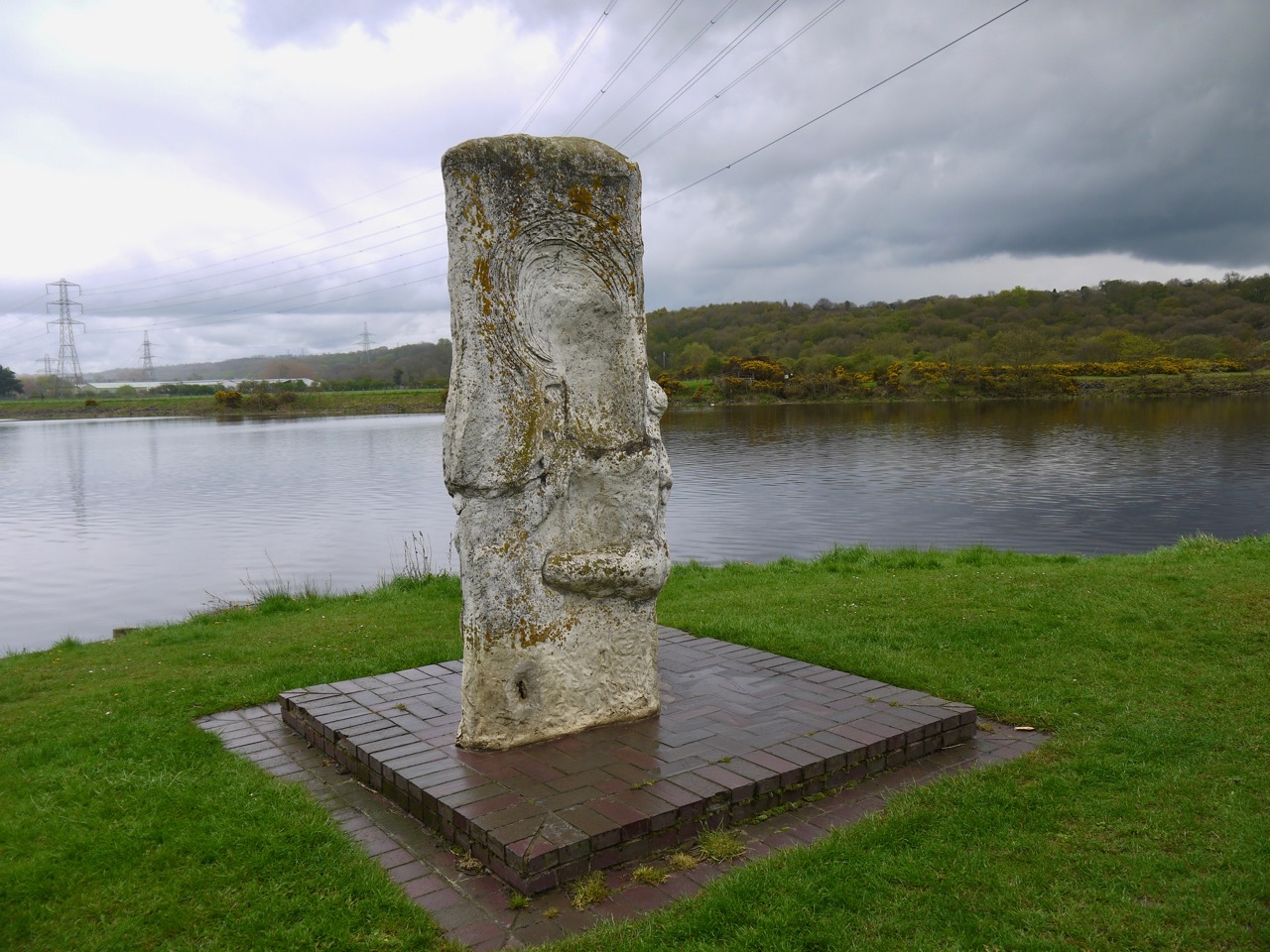 The final section of the walk took us along a riverside path back to where we were parked, at the site of the Battle of Newburn. Information boards around the memorial stone give quite a bit of detail about the battle and where the Scots and English forces were deployed. If it hadn’t been raining I might have spent a little more time there.