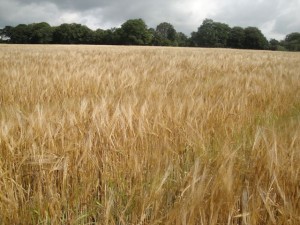 We waited, Jo and I, at Lochthorn, then joined the convoy to Lochmaben. Then sardine style to St Anns.

A veritable menagerie presented itself during this walk: caterpillars, white sheep, black sheep, goat-like sheep, cows (black and white), cows (brown), cows (that couldn’t be arsed to get up), calves, hawk, donkey, horses, deer and of course dog (black).

To be honest I felt a little deflated that it was not raining. I had been readying myself to brag that I had walked the entire Annandale Way in the p*&^ing rain, but you can’t have everything.

This “flat section” starts with a climb up a (wee) hill, but it’s all downhill from the top. There are some excellent views from here but unfortunately I was unable to capture this in pictures for some reason.

Early on, in Hazelbank plantation, the path divides without any signage but from the map it seems the routes join again after a mile or so. We took the low path which led us past a great many young grouse. Over the road at Blackburn and then onto fields without well defined paths but with enough signs to keep us right.

We crossed one small burn which in wetter weather might be a minor hindrance but could be easily stepped over today. Oscar chose to jump into the deeper water and seemed to be enjoying himself. The way separated here briefly with a choice to avoid the dairy area or go through it. We chose the latter and between Greenbeck and Heathfield Moor we passed through (or around the edges of) a field of beautiful thigh-high brown grass. My rural-raised acquaintance tells me it was barley.

The route then led us briefly to the River Annan and past Spedlin’s Tower. Andy, Elaine and I were ensnared by some magic and continued walking towards the tower, failing to notice the Annandale Way sign indicating a different direction. Luckily Hawkeye (David) was far enough away to avoid becoming bewitched and noticed the sign.

We had been walking for about two hours by now and had been on the look out for likely stopping places for half an hour or so. A wall on the Templand-Millhousebridge road met our needs. A very welcome break but I wish now that I had used mustard pickle rather than mustard on my sausage sandwich.

The walk from here passed through some rough ground before joining the roads again at Kinnel Bridge. From there we were on B roads all the way to Lochmaben.

A relatively easy section, but since we had all had a week or two without walks it seemed a little longer than it really was.

Share this...
This entry was posted in Dumfries & Galloway and tagged Annandale Way, Low Level, Paths. Bookmark the permalink.