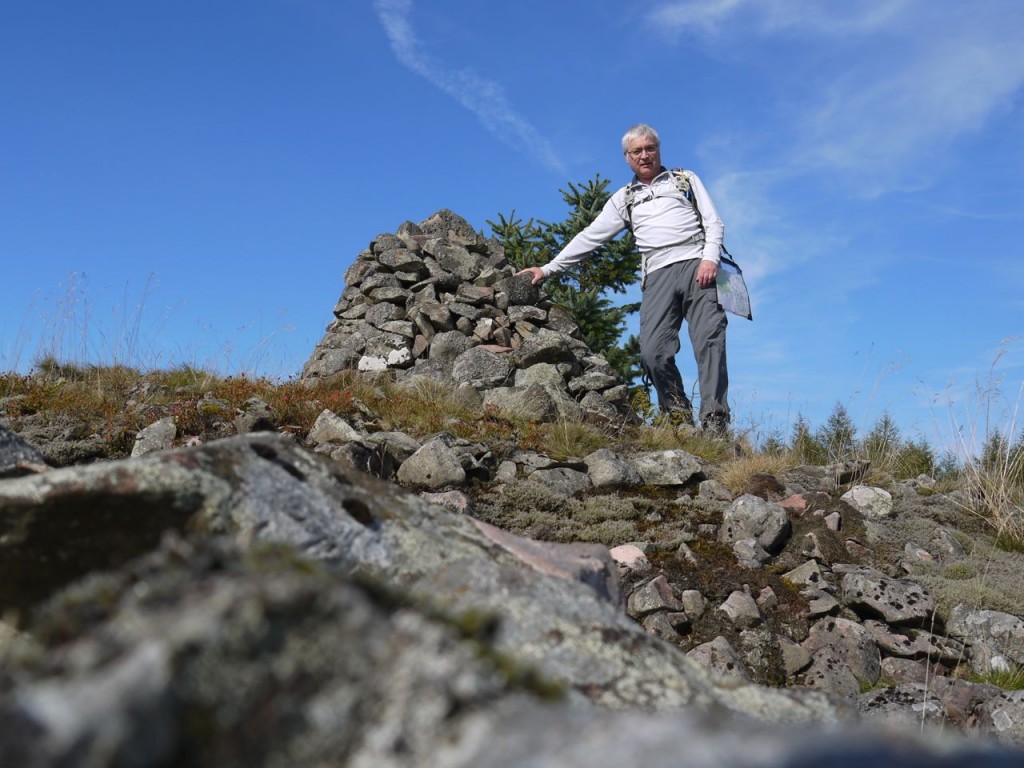 This walk starts at Loch Ettrick, following forestry tracks to Great Hill, White Hill, Auchencairn Height and then back beside Watchman Hill. The forestry tracks don’t extend up the hills so there are a few off piste sections.

A vehicle track, long disused by the look of it allows access to the summit of Great Hill, where there is an aerial and, hiding in the trees, a trig pillar. White Hill can be reached by a forest break on its SE, and the climb was rewarded by finding a small cairn within the remains of a larger circular earthwork. Both the earthwork and cairn have warning signs: “Site of Historical Interest, Do Not Damage”.

Between Great Hill and White Hill a cairn is marked in Gawin Moor, and I had planned to look for it. Most of the moor is now afforested, looking as though some giant has poured trees onto the moor filling all but about 10 acres that remains as moorland. I wonder why the forestry left this, but suspect from the vegetation growing there that it was too wet for trees. Having said that, I found the ground beneath the tussocks dry, mostly, near the tree-line, but in fact on the way back from the cairn I found it easier walking in the forest itself. A large cairn stands at the SW corner of the moor, visible from the track. The cairn is overgrown and has so much lichen that looks like snow. Of the other mapped cairns nearby there is no sign, and they may have been cleared when the trees were planted.

Between White Hill and Auchencairn Hill, a large cairn sits on a prominence and is marked on the OS map as Mid Cairn. We climbed up to take a closer look, and from the cairn had good views (of the nearby wind turbines). 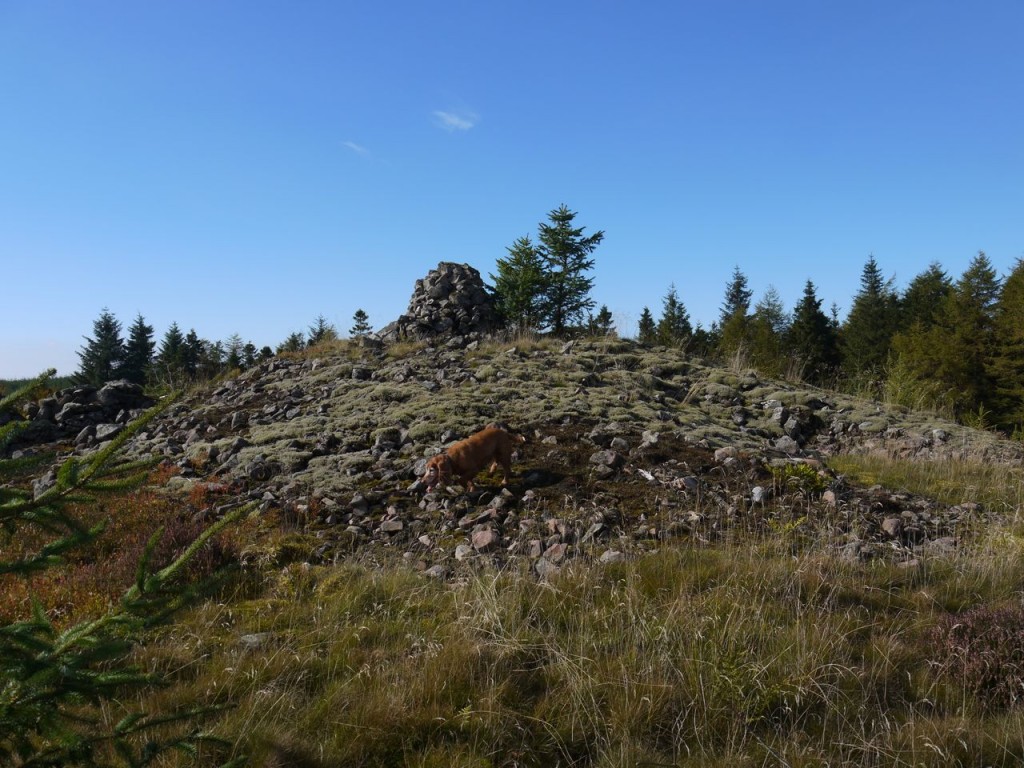 The map also shows “Souter’s Grave” a little way to the south, downhill, and after a little thought I set off to see if I could find it. The track ended and after a few metres of unpleasant, boggy, felled forest I found a high spot on a tree stump and had a look about. There was no grave I could spy but the grass was high. I decided to leave this for another day, when the grass has died back. That was 1.5 km added to the walk. Back home I looked at the 6 inch OS maps and I was quite a way from the grave, perhaps another half a kilometre.

Auchencairn Height was a little more troublesome to climb, but the OS map marks “Royach Cairn” and “Cairn”, and I was drawn to find these. The forest by the forestry track was relatively young, the trees densely planted with interlacing branches right down to the ground and I began to think that there would be no way up, but there is a section on the eastern side which is heather and tussock rather than trees. This is where the “Celtic or Deil’s Dike” is marked on older maps and I presume the ground I was climbing sits on this ancient earthwork. 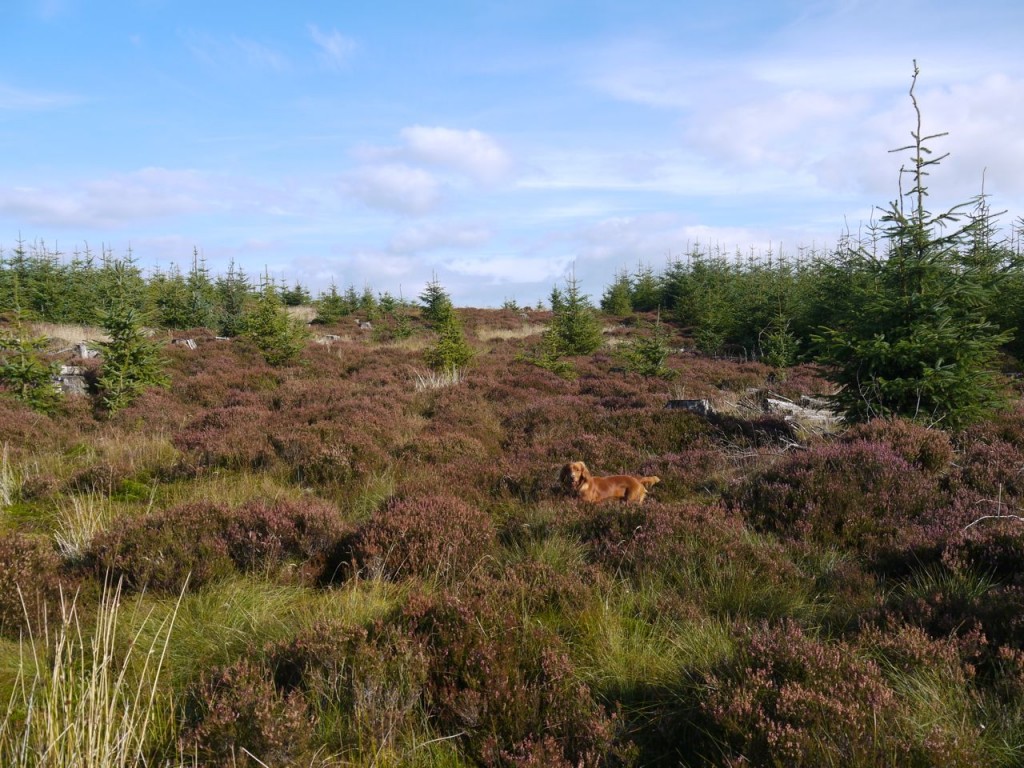 Eddie on the Deil’s Dike

Where the Royach Cairn should be there is a circular depression, or perhaps a circular rim. I presume this is all that remains of this cairn. The word Royach is one I have not come across before and I have not been able to find its meaning, but wonder if it is a rendering of roileag (relic). From there I pressed on to the summit where a small cairn does survive.

I didn’t fancy fighting my way back through the vegetation all the way back down the hill and was hoping that the open ground would continue on down the western side of the hill, but that was not the case. There was however a drainage ditch which was dry and proved a easy way off the hill.

Once back at the forestry track I followed it back to Loch Ettrick. There was no sign of the cairns at Watchman Hill. The area has been newly planted so presumably the cairns have been destroyed.

Three miles back were a time to enjoy the flowers, butterflies and birds. I spotted quite a few sneezeworts early in the walk, and some butterwort (but not in flower) in a wet section. Scabious was the most frequent flower, but the usual suspects were also about: daisy, ox-eye, cat’s ear, dandelion, foxglove, knapweed, thistle, sowthistle, heather, bell heather, yarrow, bulrush, willow herb, groundsel, and of course, tormentil.

Share this...
This entry was posted in Dumfries & Galloway and tagged Ruins. Bookmark the permalink.