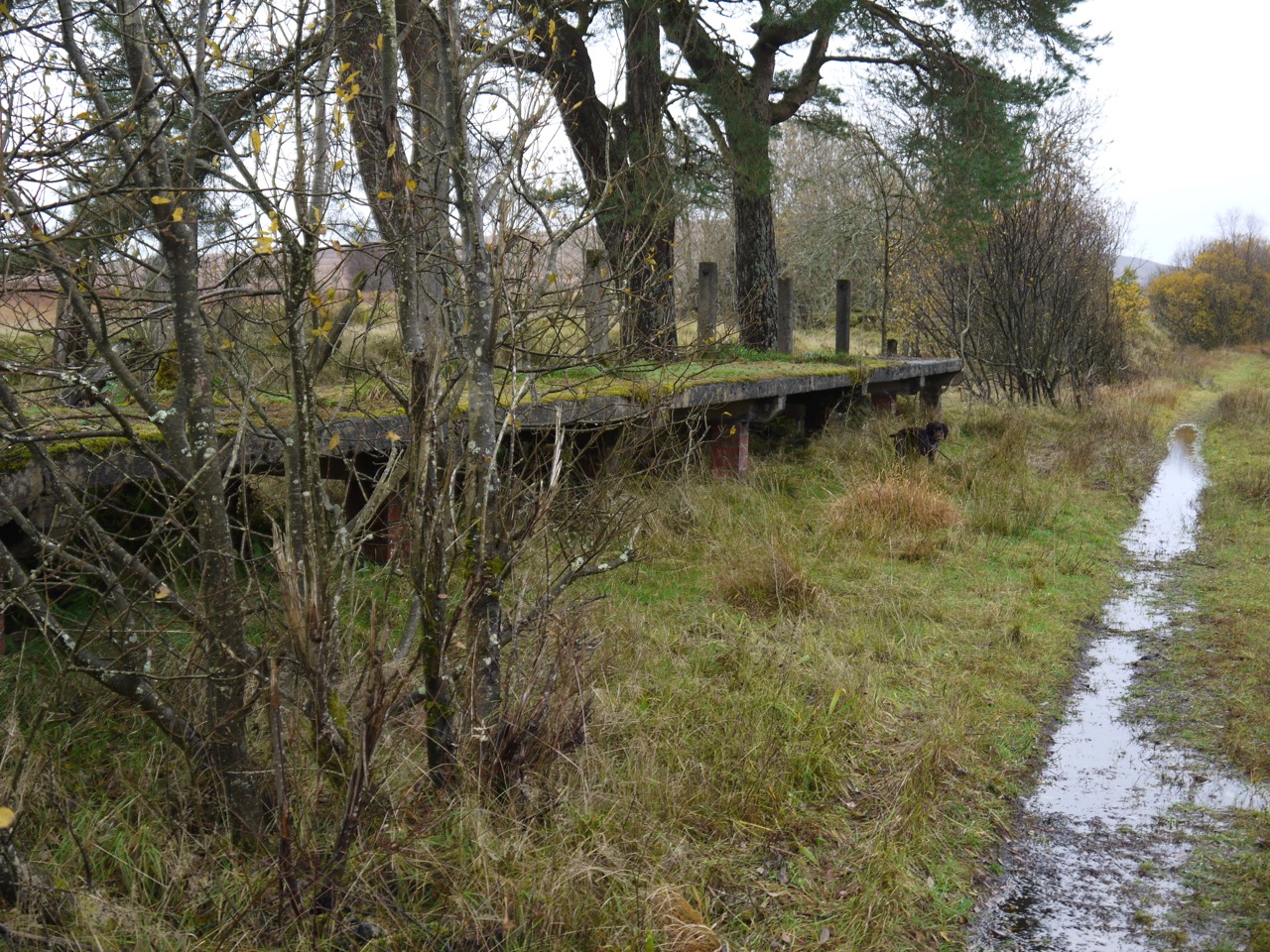 Stroan Loch to a little way past Skerrow Halt, and back

We had been heavy rain in the previous days so my planned walk, which would have included a stroll through boggy terrain, was deferred at short notice, and we headed out to Stroan Loch for a walk along the Skerrow Halt section of the dismantled Dumfries to Portpatrick Railway. 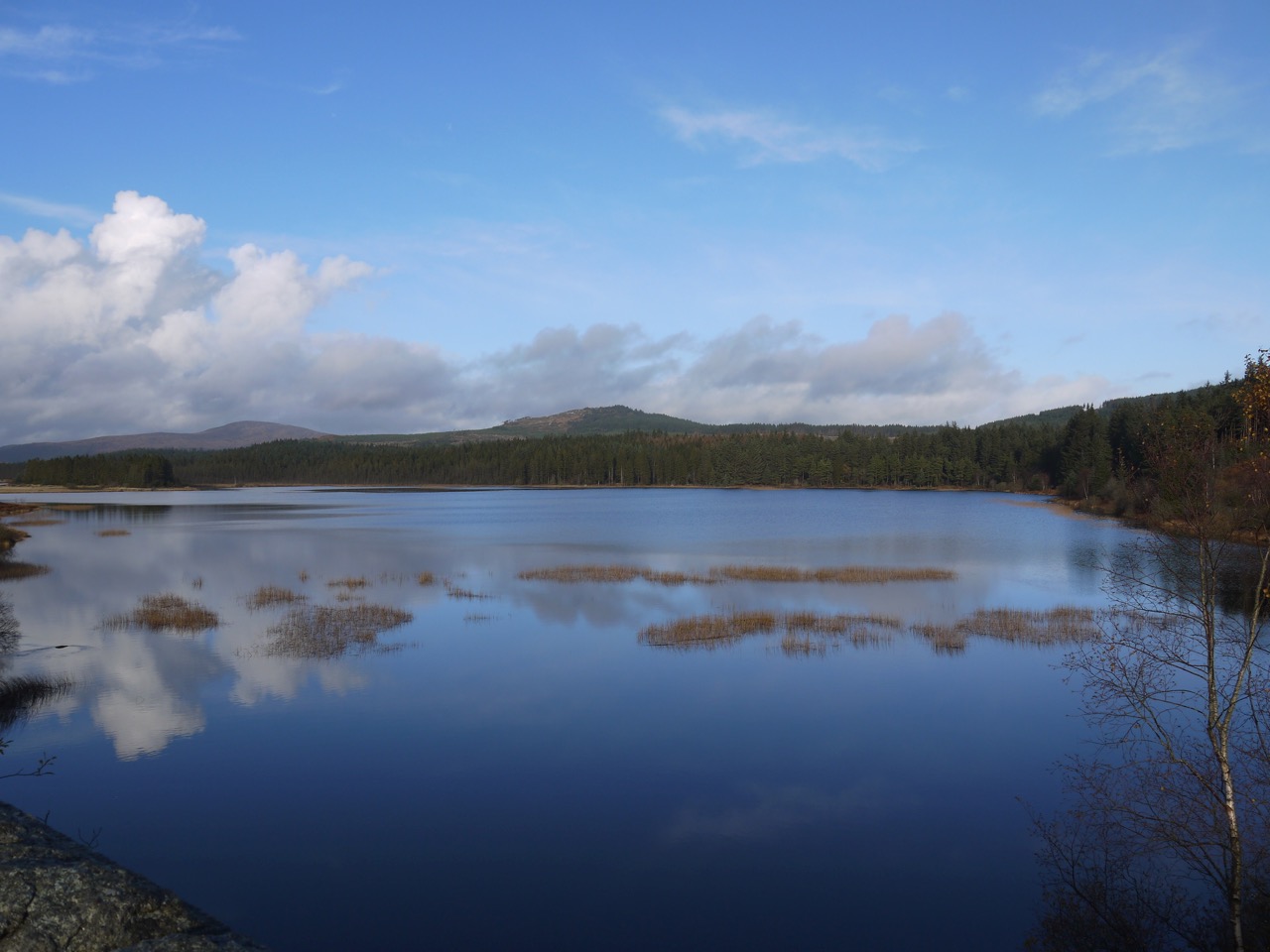 Stroan Loch takes its name from sron…a nose, point or headland. And since we English speakers can’t cope with a “sr” sound we stick a “t” in it to help us along. The headland is at the other end of the loch where Stroan Burn joins it.

As you can see in the photograph above, the weather was promising and I made the naïve error of imagining it would continue in the same vein. It was warm enough to not need a coat, so my jacket was stuffed into the rucksack. The dog’s raincoat was left in the car.

We got Christy out of the car on a lead since there were other dogs about but they seemed friendly enough so I let him off to be chased about by the bigger dog (I’m not sure what it was: white, pointy up ears about the size of an Alsatian – Jindo perhaps). The dogs’ owner pointed out that Christy wasn’t going to win in a straight line race against his dog but had the superior turning so wouldn’t get caught. His spaniel wasn’t interested in playing because he had a ball. That’s something I can recognise.

There is a wee monument by the water’s edge but we didn’t visit it since the chap with the dogs was camped there. There are details in my previous write up, Skerrow Halt. 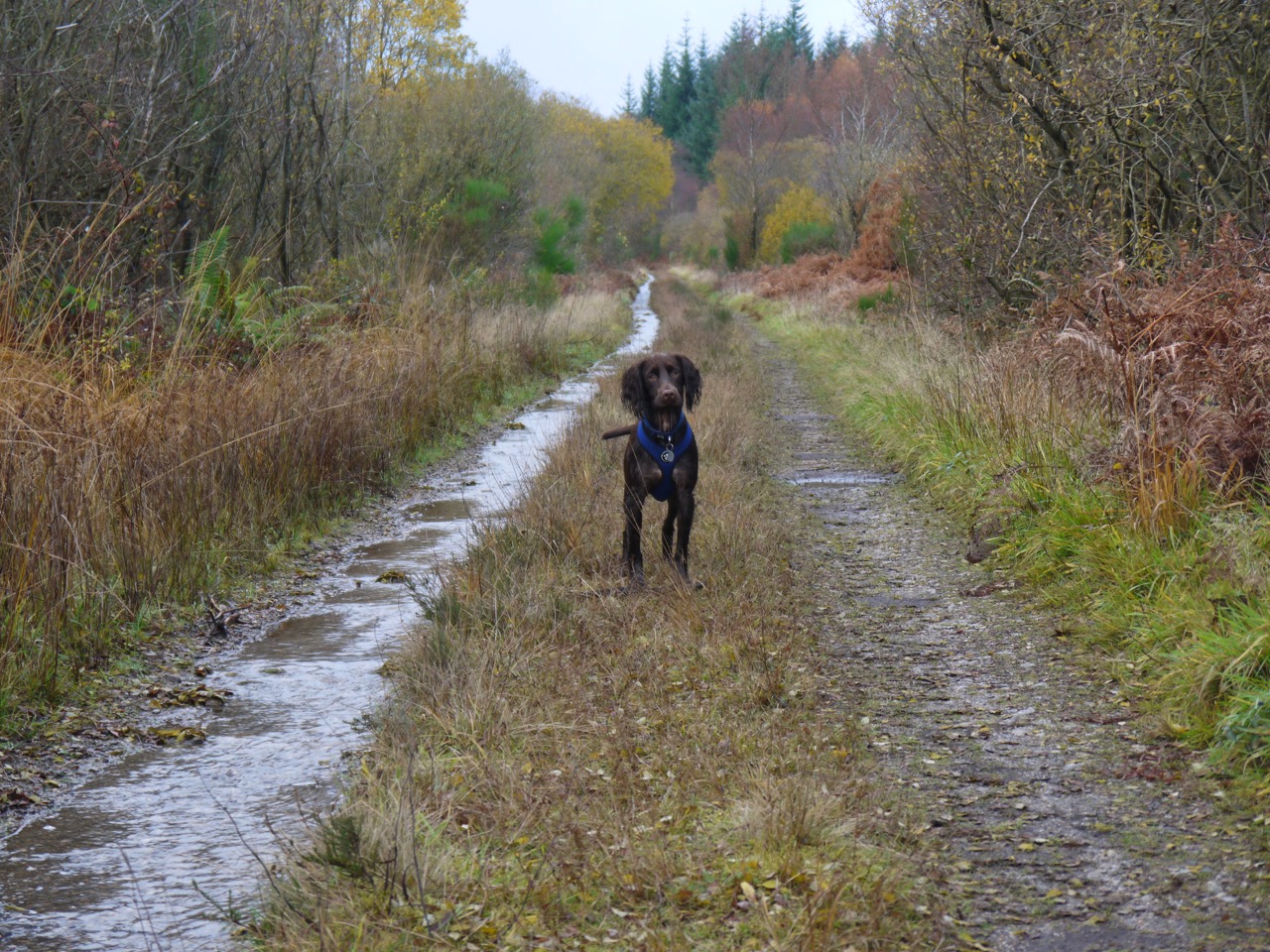 The camper and his dogs headed off towards Mossdale while we turned towards Skerrow. There is a viaduct which once carried the railway and now carries the footpath across the Black Water of Dee. Previous experience, a heart stopping moment, had taught me that dogs might choose to leap up onto the parapet unexpectedly and it is quite a drop to the rocky river below, so Christy was put back on a leash, and yes he did jump up unexpectedly.

The route of the railway now looks like any country path except that it is lined with the stones that once supported the sleepers and has a tendency to cut through wee knolls rather than climbing over them. 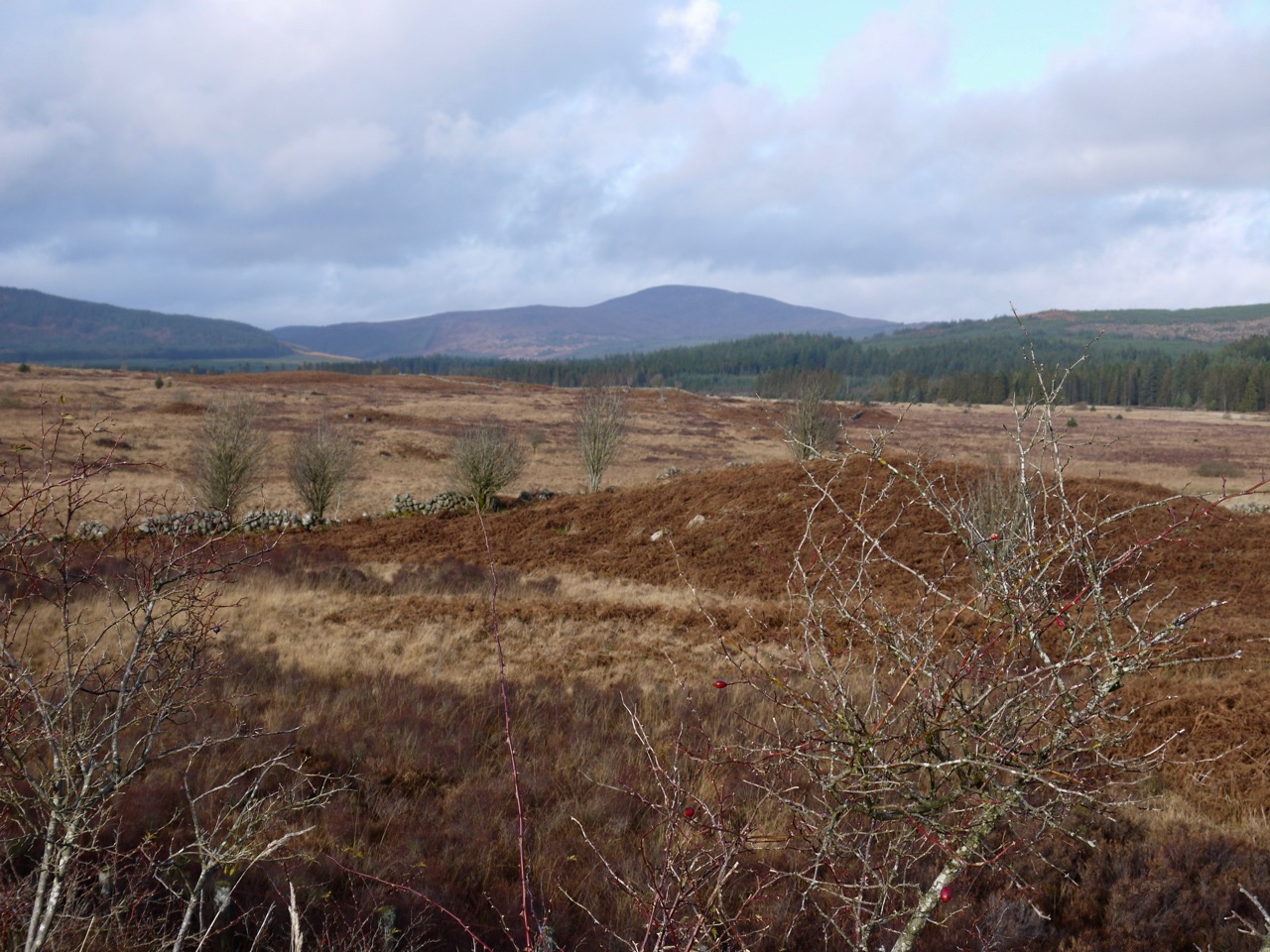 Initially the pathway is in the open with barren moorland either side, boggy terrain to its north and the rocky moorland of Airie Hill to the south. There are a couple of large cattle gates (standing open) but once past the entrance to Airie Farm the terrain is all wild moorland. Despite that there are dykes and fences here and there, to what purpose God only knows. 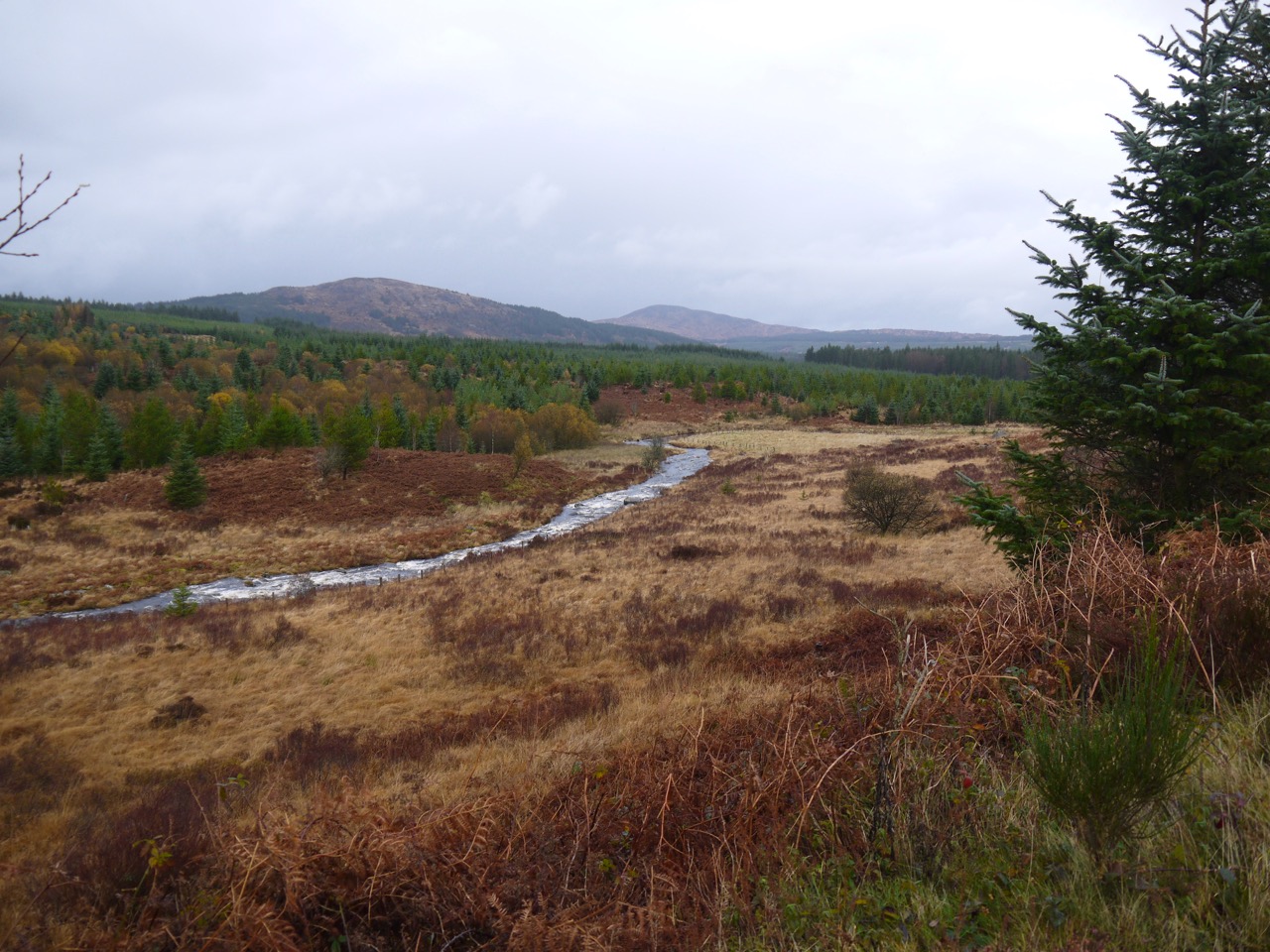 I had not noticed the sky greying as we walked, and the first drops of rain didn’t cause me any concern. I heard Audrey murmur “shower” and nodded my agreement inwardly. A few minutes later I was forced to accept that this was proper rain.

The camera was swapped for its waterproof companion, the mobile phone moved to a waterproof part of the rucksack, the car keys to a back pocket and the rain jacket and rucksack cover donned. Everywhere was wet and I thought I had missed the opportunity to benefit from waterproof trousers. That there was a frog sat on the path told us how wet it was. 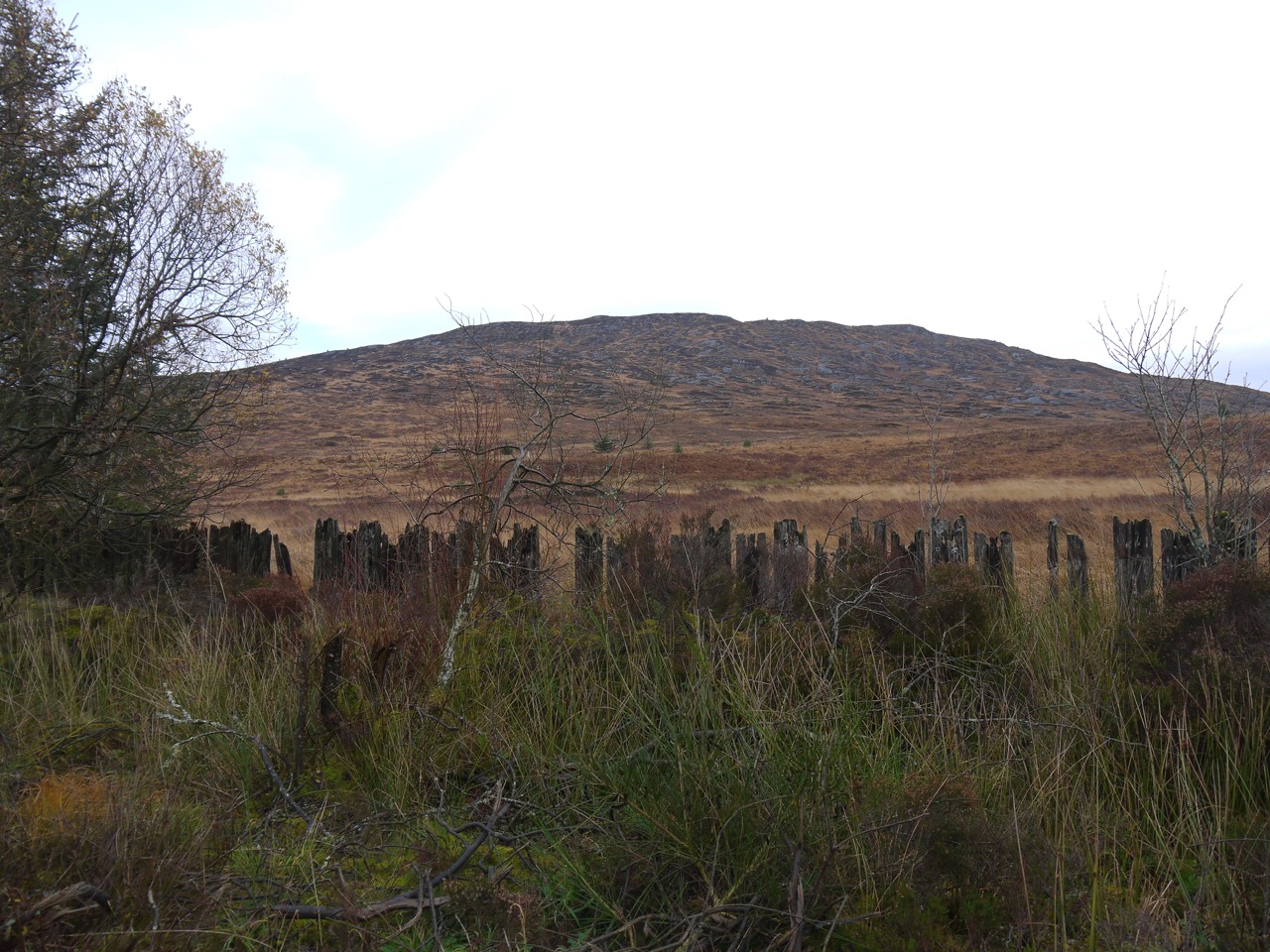 The coming of the rain heightened the orange and golds in the landscape but the waterproof camera struggles with low light and couldn’t capture the colours adequately. 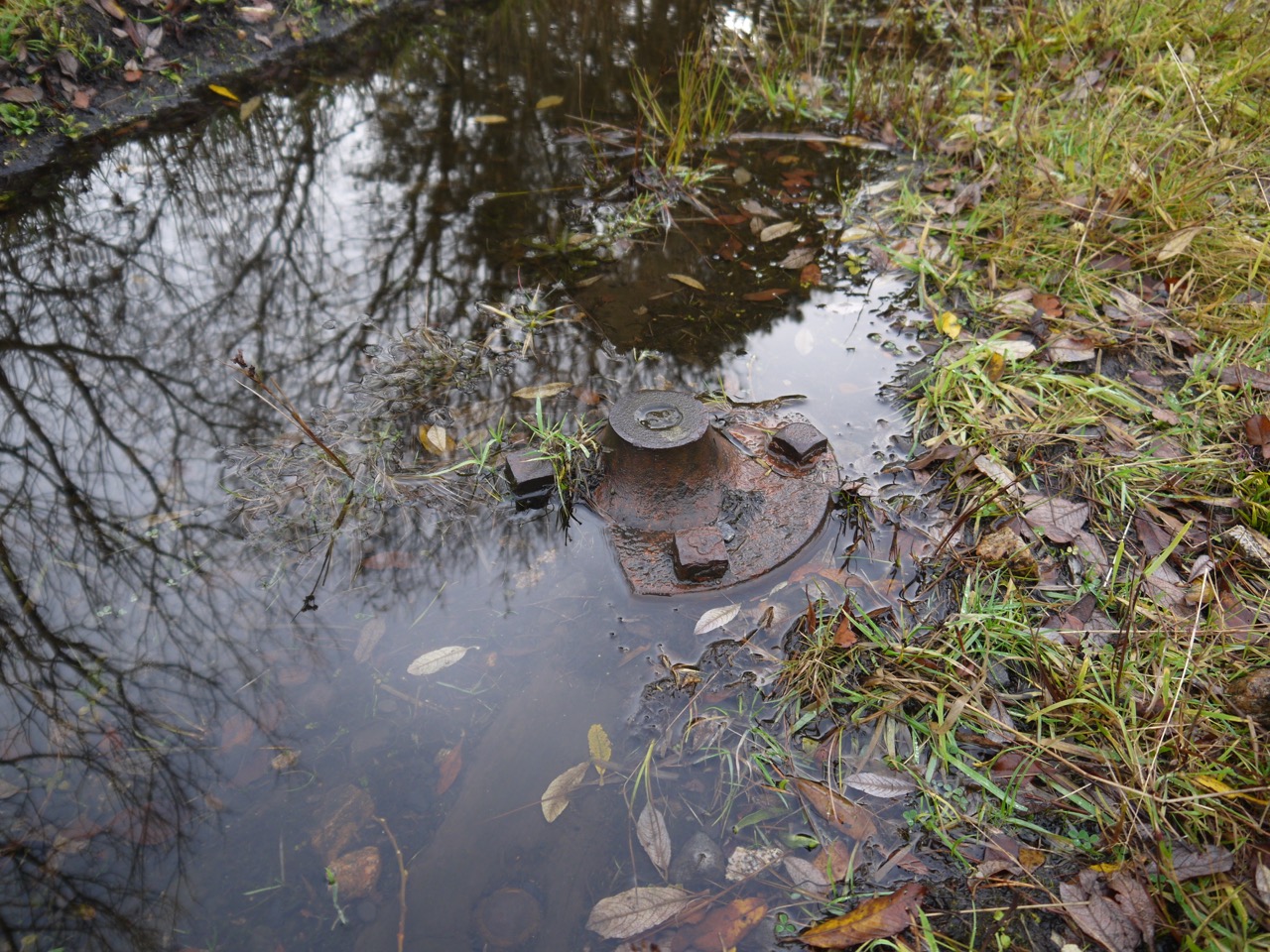 Remnants of the railway

The rain did take a break as we came into the ruins of Skerrow Halt so we could wander about in a little more comfort. When the railway line opened in 1861, Loch Skerrow Halt was constructed as a water stop for the steam locomotives. There was a plentiful supply of water available, and water tanks and a pumping station were built. There is a line on the internet which reads “The station was one of the most remote and isolated points on the line. None save the stationmaster and possibly a railway worker or two inhabited this lonely place unconnected to any other habitation except by the line itself.”

But perhaps there were more than the these workers. I was told a tale from a retired GP who was called to a pregnant lady at Skerrow Halt. He had to get there by riding a bicycle along the railway, and her transfer to hospital  was achieved by putting her on a passing train to the station at Mossdale where an ambulance was waiting. 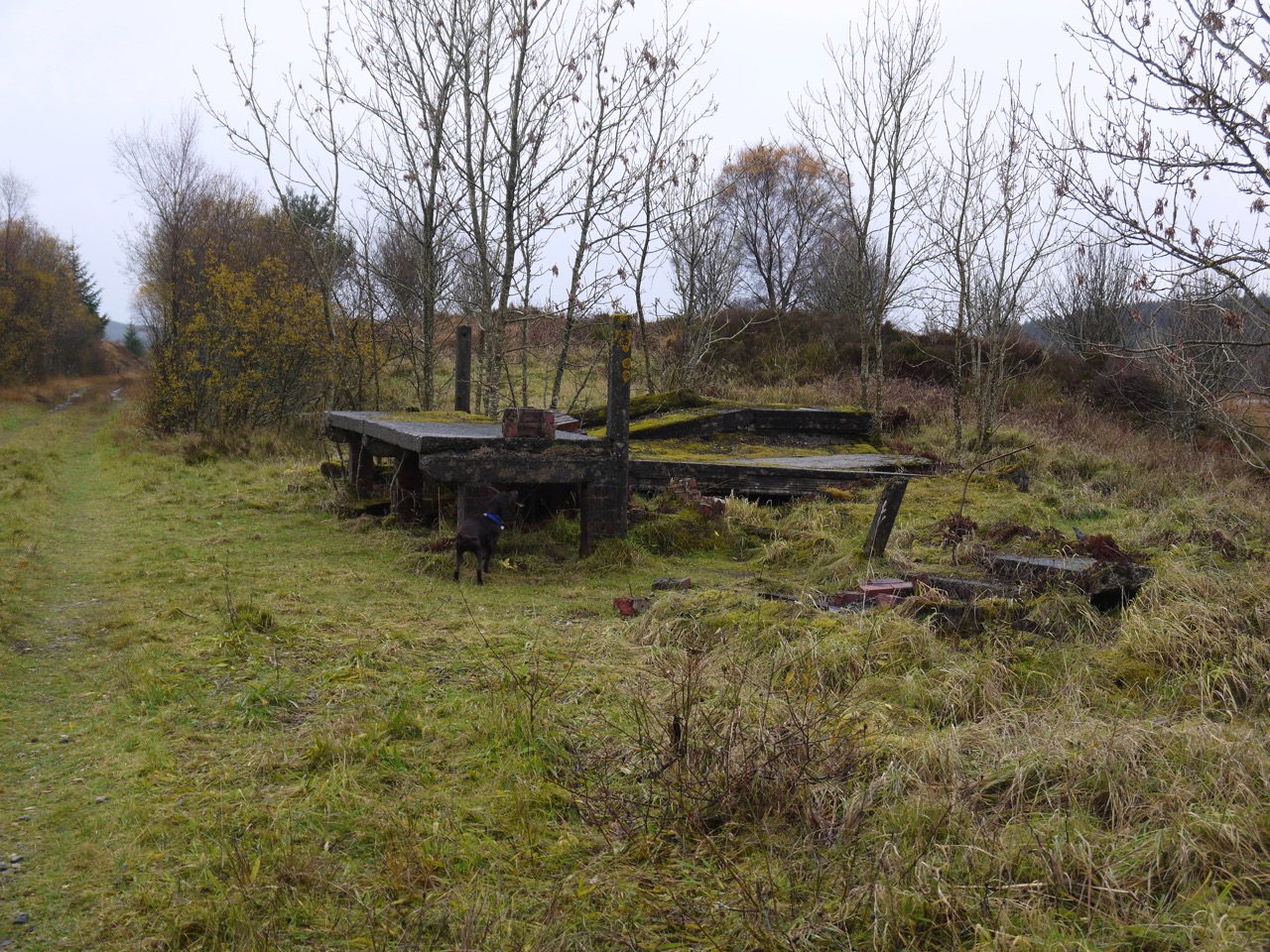 The Visit South West Scotland Website tells us: “Those with an interest in lost railway will find the walk worthwhile. After closure of the line, Loch Skerrow halt was abandoned, its few houses left to decay until the Army on exercises finished the job with ordnance as a few remaining pieces of smashed equipment bear witness. Parts of the platform remain though nature is overtaking them. Water still flows from a culvert that would have fed the pumps. Standing on this desolate spot on a warm summer’s day, sufferers from railway nostalgia can perhaps visualise the sight and hear the sound of the “Paddy” on its way to the coast.”

To this I might add that standing in this desolate spot on a cool, wet, autumn day, it is difficult to believe that this is the same spot as seen in photographs from over half a century ago, and there is certainly an eeriness about these remote ruins. 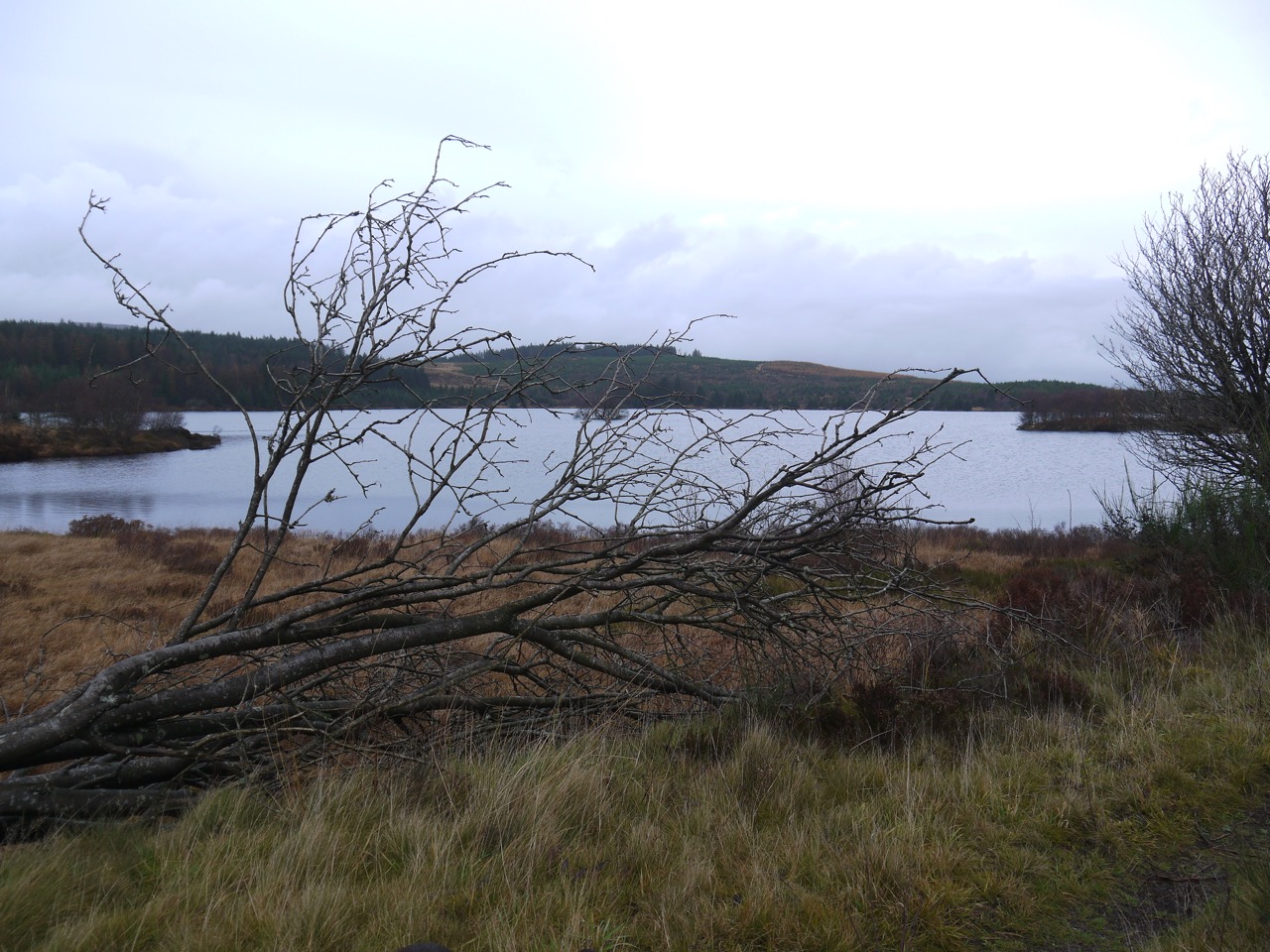 The Portpatrick Line (Castle Douglas to Portpatrick) was said to be 60 miles and 60 chains in length, which I find strangely pleasing. Presumably the combination of sexagesimal and imperial is activating a nostalgia subroutine.

As we walked on I did give some thought to those who had built the railway across this boggy moorland. The cuttings are obvious signs of their efforts but the raised sections crossing the bog would likely have been even more of an engineering challenge.

Loch Skerrow itself would originally have been Loch Sceireach, the rocky lake. It has several small islands, some with trees, others just rocks. A “moat” of bog kept us from its edges. I recalled that there were geese when I was here  a few years ago, but we had not seen a single bird the whole day and the loch’s waters were stirred only by the wind. 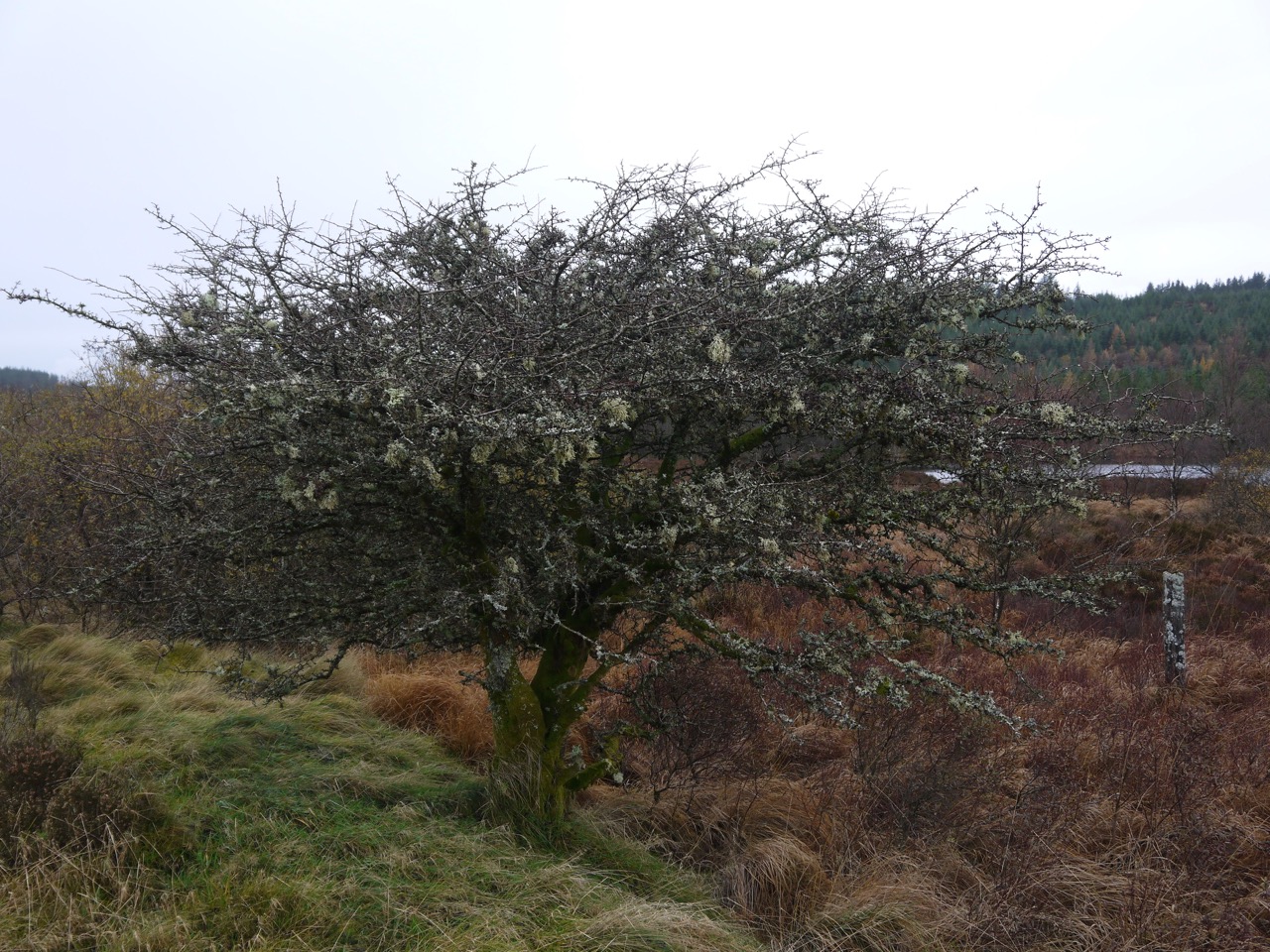 Beyond Skerrow Halt there is a relatively new looking gate, but I cannot see what purpose it serves. As a piece of mildly interesting trivia, the half gate will open either way, push or pull.

When last i was here this section of the track was overgrown enough to make walking quite difficult. Now as you can see in the photograph below, the walking is easy, even for a wee dog with a stick. 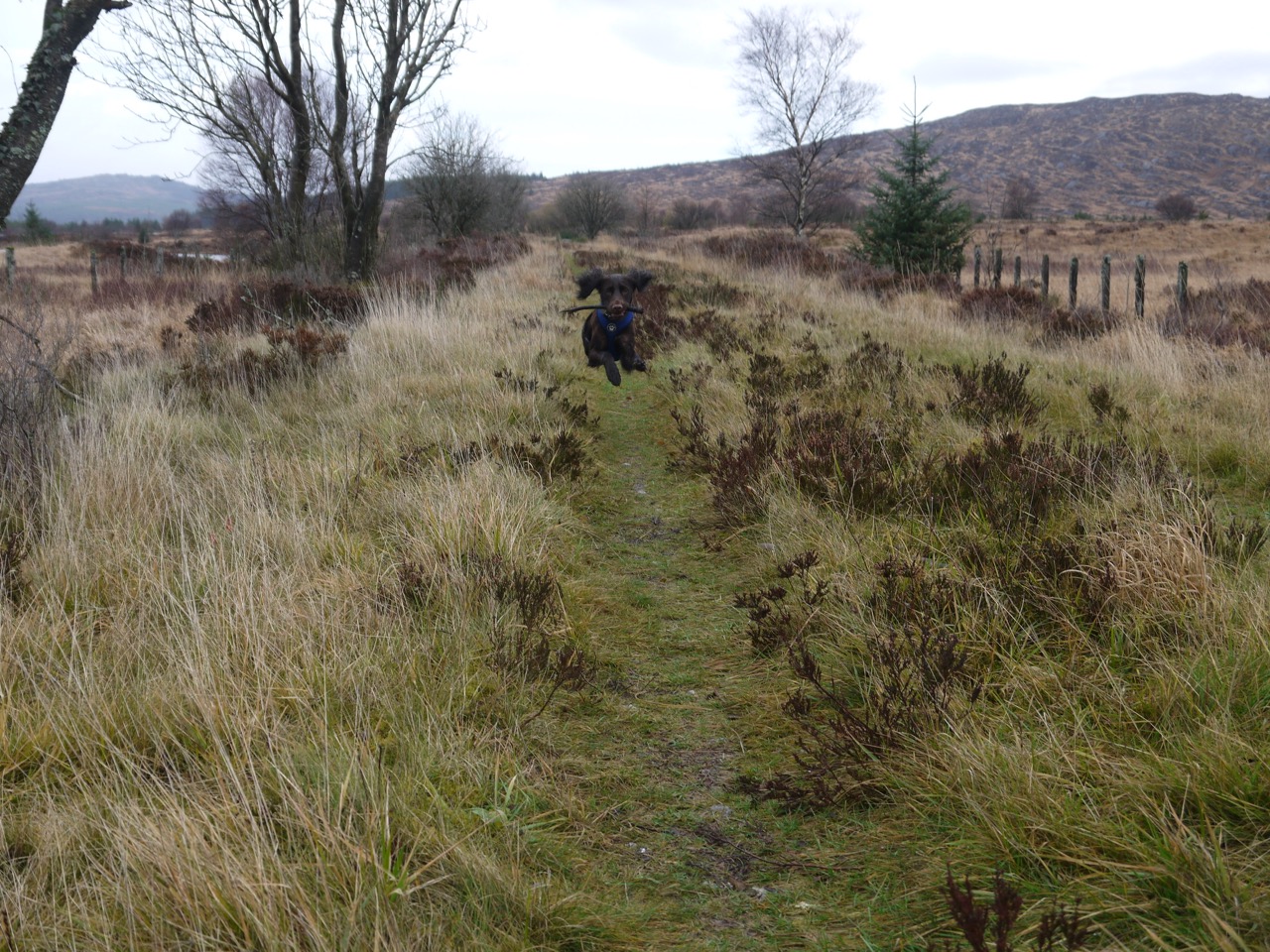 There was no sign of a good place to cross the boggy ground beyond the Loch, especially after the preceding days’s rain and we decided to turn back, retracing our steps rather than  walking on towards the Little Water of Fleet. We stopped for a break at the ruined station but that was cut short by the return of the rain, which thoroughly drenched us on the way back.

Share this...
This entry was posted in Dumfries & Galloway and tagged Ruins. Bookmark the permalink.