Winding down with Walla Crag 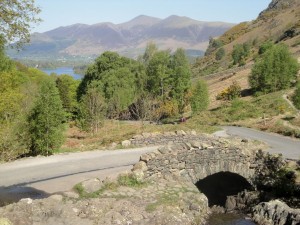 Our fourth and final day was a free choice. On previous days we had thought about Blencathra, since Elaine fancied climbing it and it would be on the way home. Injuries from the earlier days, however, meant we needed a less taxing day and my “Weekend Walks in the Lakes” book gave us some options. Walla Crag was chosen since we could do the outward walk then get the ferry back. We had after all, walked the lakeside part last year.

Since this was a short low level walk there was no need for packed lunches or portable pies, and the weather meant we dispense with our foul weather gear We checked out of the hotel, got our boots on and headed up Keswick high street, past the George pub and out of town, turning onto Spring lane and walking up through Spring Woods. Waling without rucsacs is certainly easier.

Once out of the woods and onto open farmland we passed many sleeping lambs and calves. The lambs here, and those at the back of Skiddaw, were much larger than those we had seen by Seathwaite.

Our route took us along the Brockle Beck past Rakefoot farm with a gentle but increasing incline. This gave us fantastic views of the Derwent Fells, The Skiddaw hills, Derwent Water and Keswick, bathed in sunlight beneath a cloudless sky. In fact the whole route showed us this same view from a variety of angles and heights.

Unfortunately Elaine had to do some stretches just before we got to Walla Crag. They looked pretty painful, but must have worked since she was able to continue.

Most of the first half of our walk we were close by a young couple who managed to argue most of the time at high volume, yet were often spied holding hands. Married for a couple of years I should think. Their accents sounded north-eastern to me but David reckoned it was Cumbrian.

Near the top we passed through a gate onto Walla Crag itself for more fine views, but now also including the Borrowdale Fells and Sca Fell hills. Blaeberry Fell blocked views of the Eastern fells.

Then our descent took us around Lady’s Rake and the deep cleft of Cat Gill, then down by Falcon Crag, beneath Brown Knotts to Ashness Bridge.

Apparently Ashness Bridge is the most photographed bridge in the Lake District (but I can’t recall where I read that). Certainly it is one of those that would not seem out of place with Gandalf riding over it in a horse and cart. The fact it crosses the Barrow Beck also gives it a LOTR feel. As it was we were given the opportunity to watch a gas truck edge its way over with inches to spare.

I decided it would be nice to have a photo of Skiddaw seen from beneath the bridge and since the water level was low this was easy enough. I must have sat somewhere damp however to get a wet posterior, that’s my excuse anyway.

Once at the Lake we found a jetty, but little to suggest that a ferry would stop there. It looked a little on the small side as well. So we set off south along the lakeshore path to find a ferry stop.

Nature put on a show for us with some ducklings close to the lake shore and several pairs of geese. Catbells, just over the water had several paragliders around its summit.

Refreshments were taken at the Mary Mount Hotel, where we heard that the lake water level was too low for the ferry to stop there but it did stop at the jetty we had passed twenty minutes walk back along the lake. An alternative was to walk up to the Lodore Hotel, five minutes away, and get the bus back to Keswick. This would also give us a chance to visit Lodore falls.

A brief walk on a woodland path got us to the falls where David took the opportunity to soak his aching feet and I crawled around on the rocks looking for a good photo of the falls. I was not particularly successful, but David did mange to numb his sore feet.

We then rode an open topped bus back to Keswick and ended the outing with Goulash at the Dog and Gun. Substantial portions, but we did our duty and finished it off.

A surprisingly good walk (chosen by Elaine) with great views in excellent weather.