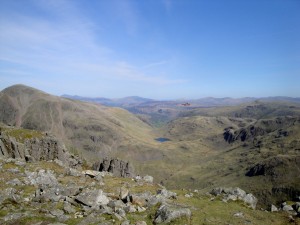 Seathwaite farm car parks were full but with a little backtracking we found a spot, got kitted up and set off. The path passes through the farm and heads up alongside a rather weedy stream (the young River Derwent). At this stage we appeared to be on a path so crowded that I was half expecting to be queuing to get through any narrow bits.

The first staging point was Stockley Bridge. This stone bridge wouldn’t have looked out of place in Hobbiton. There were some inviting pools of turquoise water and we wondered about dipping our feet on the way back. The colour of this water was seen in many streams and pools on the way up and must have been due to the rocks I presume.

At the bridge we had the choice of following Grains Gill or climbing more steeply around Seathwaite Fell to Styhead. I thought it was six of one and half a dozen of the other, but having completed the walk I think our choice of the Styhead route was the right one.

The path was steep, not enough to erase smiles but walking up in the bright sunlight did force me to roll up my trousers. For some reason this gave me a strong desire to wear a knotted hanky, presumably a genetic thing related to my northern roots. Luckily I was sans hanky but still felt like the bloke off Monty Python’s. Better comfortable than fashionable though, eh?

The path took us past Taylorgill Force, with more turquoise pools by which time the person density had noticeably reduced. Where had they all gone?

As we turned more westwards the Scafell pikes came into view, framed between Great Gable, Seathwaite Fell and a deep blue sky. The easiest path was often in the stream bed of Styhead Gill which was relatively empty. The path crosses the gill on a narrow footbridge that presumes walker’s BMIs are less than 30. The gill was pretty empty though and though the bridge wasn’t absolutely necessary, everyone used it.

Styhead Tarn was only a few hundred metres further on. A beautiful spot. The Tarn stands at a crossing of paths, the one we had followed along Styhead Tarn, those to Esk Hause, Wasdale, Great Gable and the Corridor route. Our interest was caught by the mountain rescue stretcher box and we were drawn towards it like moths to a flame. In doing so we failed to notice the path off to the left that we should have taken. Luckily once we were past the box our minds cleared and we could see where we should have been. It was as though the stretcher box had enchanted us. Perhaps it’s a magic box. I see that Wainwright mentions it is easy to miss the path where we did.

The corridor route was visible climbing up the western slopes of Great End and Broad Crag to Lingmell Col. The path was easy to follow and even had steps built in places. There was a brief scramble at Skew Gill but nothing to dent the spirits.

At Lingmell col we eyed up Scafell Pike and Lingmell. It was decided that lunch should be taken on Lingmell since it looked less crowded than the Pike. The views from Lingmell were impressive: Wast Water, Seascale, the Isle of Man, the Gables, the Scafell hills, Styhead Tarn, Derwent Water and a Navy Sea King. The path up Scafell Pike looked well defined, and busy.

We walked down Lingmell’s scree like path, across the grass of Lingmell col and then started up the Pike’s rocky path amidst the many other walkers of all ages and sizes, with their varying appropriateness of attire and numerous dogs. Yes, everyone and his dog was climbing the Pike that day.

Scafell Pike’s summit is rock covered with a large war memorial where we climbed for our photos. Not surprisingly the views were again impressive. Sca Fell was invitingly close and the gully to Foxes Tarn easily seen, but it will have to wait for another day, probably to be approached from the south.

After chatting with some folk on the summit we headed off towards Broad Crag. Because the summit is covered in rocks and boulders there is no obvious track and the cairn marking the way is difficult to spot, what with it being a small pile of rocks amidst a mountain top full of similar rocks. After a wee scramble we were heading along the ridge past Broad Crag, stepping from one large boulder to the next. I’m pleased we were doing this in dry weather and could trust our feet not to slip. This would have been much slower going in the wet.

After Broad Crag the boulder field ends and the ridge beside Ill Crag is littered with small cairns to guide walkers. Great End was only a short diversion, so how could we say no? Unfortunately, Andy started to get pain in his thighs during this climb, but with a bit of stretching was able to make it.

Great End does offer good views including a look back over the Scafell ridge, Esk Pike and Bowfell. And what’s more, from there it was all downhill.

As we walked down towards Esk Hause I became aware that my bladder had passed into the uncomfortable stage where the sound of running water is no longer a joy. This coincided with an increase in the numbers of walkers on the path and a complete lack of hiding places. I wonder if there should be some generally recognised signal when attending to the call of nature, perhaps a raised walking pole, or the singing of a particular song, that warns folk off.

Springing Tarn could be seen from the Hause and we walke towards it then turned right alongside Ruddy Gill. The path down from there was easy enough and in good nick. A small bridge took us across Ruddy Gill just before it joined Grains Gill. We followed this stream down to Stockley Bridge to join the path by the River Derwent back to the car.

A great walk with three Wainwrights and we couldn’t have asked for better weather.