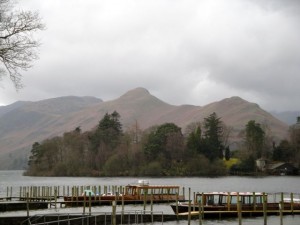 What a start to the day. A full cooked breakfast and plenty of coffee (oh, and of course, good company). The weather had that special teasing quality, with enough light rain to make us don waterproofs, wear them all day and yet not really need them. I agree with Elaine that had we taken them off, the heavens would have opened.

This was our low level walk. “Yippee” cried my thighs. About half an hour in we met some returning walkers who told us that the path ahead was flooded. But undaunted we pressed on and despite the inch of water made our way through. The high water mark showed that much of the paths here had been under water recently.

Just after this we came across a Robin (bird not three wheel car) which was close enough for some pics. Admittedly our group were not unanimous in its identification. (see pics to see for yourself).

The one part of this route that was a little tricky due to slippy rocks was busy with a group of oriental teenagers wearing white trainers (some with heels). Mind you they probably looked at us and wondered why we were all geared up when walking a lakeside path.

Then elevenses at a hotel whose name I forget (Mary Mount Hotel?) . Their sign said walkers welcome but it looked so clean and posh, David had to do a reccy before we went inside. Coffee/Tea and biscuits and a very warm bar-room. After that, past the Lodore falls and across a series of walkways across the southern end of Derwentwater and into woodland as we turned to walk along the western shore. Most of this was signed as the Allerdale way.

This section was like the paths around Loch Trool. We then came onto busier paths and met many more walkers. There was even an large group of folk eating their sandwiches under trees and umbrellas. Then we were onto roads. The footbridge across from Portinscale was closed, presumably damaged in the recent floods so we had a minor detour to cross on the road bridge. Having left the cover of woods and being on the open riverbank this might not seem the ideal place for a pee. (Just saying.)

Eventually we were back in Keswick, passing the pencil museum. Perhaps the presence of ducks in the car park was the clue as to how wet the weather had been.

Finally Fish, chips and mushy peas at the Old Keswickian.

Mike’s homework will be learning to differentiate giraffes and cows.

Share this...
This entry was posted in Wainwrights and tagged Low Level, Wainwrights. Bookmark the permalink.