Chipping to Whitewell and back

Memories do not persist, within moments details are lost, and with the passage of years fundamental details may also fade. But the event I am trying to recall here is not unimportant to me. Though it is not a crucial episode in my life, I have had occasion to recall and re-tell the story several times, so it must have some emotional resonance.

There are parts of this day I remember, parts which with some effort can be recalled, but most is now lost, unless I suppose I choose to undergo hypnotism.

The event took place in a foreign country, the past, in a time before affordable mobile phones or embarrassment about wearing 1980s clothes. 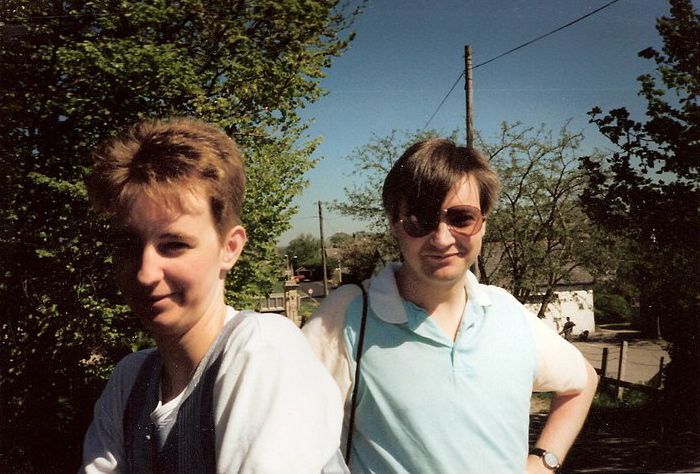 I remember the weather, who was with me, where the walk started, the furthest extent of the expedition, some events there and at the end of the walk.

A little background may help. I had a new girlfriend and she had gathered that I enjoyed walking. There are variety of courting rituals associated with this period in a relationship and in one of these she had bought me a booklet of some local walks, she being a local and me an interloper. She had even gone so far as to to give the impression that we two might go on one of the walks together.

There is a first leg to many famous journeys, Frodo travelled to Bree, Marco Polo to Acre, and Admiral Anson to Madeira; Lynn and I journeyed to Chipping, nestling in the forest of Bowland. It was a warm sunny day and the village was, I remember, reasonably busy with tourists. I have no recollection of the equipment we took with us but our route was guided by the booklet. I can still recall a section where we were to cross a fence at a stile which proved difficult to find, being hidden behind a small knowe. Lynn’s faith in my navigation began to falter here.

At one point we walked along a fence bedecked with dead crows. Lynn felt this was something to do with witchcraft and I felt that was unlikely, but there was little point in arguing the point. Whatever the reason for them, the dead birds had the same emotional effect as the music in a film when villain is creeping up on an unsuspecting victim.

When on a long drive, one can see the fuel gauge gradually falling. On this walk I soon became aware that my girlfriend’s enthusiasm for the walk was evaporating, and doing so at an alarming rate. I hadn’t thought the enthusiasm would fall so quickly,  and was concerned that it would soon be gone completely.

How was I to salvage the situation? Turn back? No, I had a better idea. My secret weapon, The Inn at Whitewell. We were almost there. You may understand the walker’s concept of “almost there”, Lynn did not.

The furthest extent of this walk was Whitewell, where there is an Inn. We would be able to rest our weary legs, have a bite to eat and a drink before heading back. I had hoped that this would be a pleasant surprise but the situation demanded that I reveal the Inn’s existence as a morale booster. “We’re almost there, just think of the ice cold drinks” etc.

What I had not planned for was the River Hodder, which stood between us and the Inn at Whitewell. The described route just mentioned crossing the river. There are stepping stones there now but I don’t remember any back then. The nearest bridge would be a two mile detour. The river was wide but only a few inches deep with a bed of smooth pebbles. On such a warm day what could be better than wading in cool water?

In your mind mix together the ingredients: disgruntled girlfriend, short on enthusiasm, jollied along by promises of seats and cool drinks only a few minutes away, the pub on the wrong side of the river, and the fording of said river. Then pour in some petrol and set fire to it. (Read on.)

We, or more correctly she, took some time to come to terms with our options: cross the river, walk another couple of miles to the bridge or turn back. Then we spent some more time pussy-footing across, footwear in hand. Once on the far bank we sighed in anticipation, then met the metaphorical petrol and an open flame.

While crossing the river we had heard a bell. Though I didn’t realise at the time, when it was rung, someone in the pub will have shouted “Time, gentlemen, please”. When we reached the pub it was closed. They declined to serve us, not even soft drinks.

Think of enthusiasm as flammable. Poof!

Lynn decided that rather than walk back through fields and woods, the shortest and most aesthetic way back, she would prefer to walk along the road, since there was a small chance that someone she knew would drive past and give us a lift. I felt that the possibility of a lift was very small and although sticking to the original route would have been the quickest way back, I was obliged to fall in with her plan.

It was five miles back to Chipping along country lanes. The day stayed sunny and warm but unfortunately Lynn’s wish for a lift was not fulfilled.

Back in Chipping we found a small shop that sold ice creams and had one each. I have a fragmentary memory that Lynn had a multi scoop version. I have a clear memory that she finished hers in short order and I was sent back in to get a second ice cream for her. The lady in the ice cream shop was very sympathetic believing Lynn must have dropped her ice cream for me to back so soon for another.

I suspect, given this walk and several others, that Lynn and I, though made for each other, are not meant to go walking together.

Share this...
This entry was posted in Far away and tagged Low Level. Bookmark the permalink.