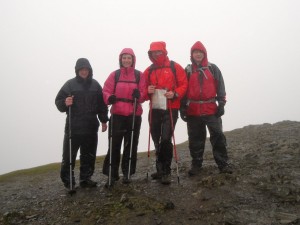 Warm, negligible wind and scattered showers was somewhat off the mark. The weather man had badly misread the Veiled One’s mood. So our ambitious plan, hatched in the belief that the goddess of winter was slumbering, a linear walk from Mungrisdale to Blease Fell via Sharp Edge, had to be adjusted.

The new plan was to climb Blease Fell, walk the ridge and assess the feasibility of Sharp Edge, with Scales Fell as an alternative descent. I regarded the downgrading of the Sharp Edge route from “planned” to “possible” as a move in the right direction. We still hoped that the weather, especially the mist, might yet clear.

The road from Threlkeld to the Blencathra centre allowed us to warm up and shed a layer of insulation before the steeper climb over Blease Fell. The path has three sections. The first 200m is a wide grassy easily recognised path which gently crosses the close contours. Several other paths cross this. The next section crosses an area Wainwright calls a grassy plateau but has 150m of climb. The path here is narrower, less obvious at times but still easy to follow. The final section, the steepest, has a wide stony zig-zag path that cannot be missed. Unfortunately the hill remained clothed in mist so our only views were of grass, stones and occasional cairns.

Our vanguard, the brothers Wylie, having forged ahead, paused for the plodders to catch up and doled out morale boosters, both physical (sweets) and psychological (we were at about 760m).  We expected to reach the ridge in another 50m or so but it seemed a lot further. The mist made assessing our position and distance difficult, but looking at the GPS track, quietly recording deep in my bag, the assessment was only 30m or so out.

Sadly the visibility on top was even worse, and the wind stronger. We were able to see the first few metres of the south facing cliffs, but nothing could be seen of the southern ridges. We made our way along Blencathra’s ridge over Gategill to the summit at Hallsfell, heads down, clothes rippling in the wind.

Brian by this time had begun to foam. He apparently had a bottle of shower gel in his rucksack and the top had come off allowing it to leak out down his back and legs. Elaine thought it was Lynx but I don’t think it could have been because we walked past a few female walkers and none of them ripped off their clothes or threw themselves at Brian. Perhaps the Lynx effect is reduced in cold rain.

At the summit we decided the weather ruled out the Sharp Edge route so we would head down the path over Scales Fell. I was keen to walk along to Sharp Edge to have a look at it before heading down. We followed the path but eventually came to a dead end. It seemed strange that such a well worn path would just end at a steep drop but end it did. I did wonder if there was a faint path lower down but with the mist it was difficult to see. We were in fact at the top of Sharp Edge.

The weather if anything was worsening and since we could not be certain where the various paths heading down would lead, we decided to apply David’s wisdom that the best route is the one you know and go back the way we came. So we headed down Blease Fell, the best descent of Blencathra according to Wainwright. The cloud base had risen a little to 500m or so, so on the way down we could see Derwent Water and Cat Bells.

Share this...
This entry was posted in Far away, Wainwrights and tagged Wainwrights. Bookmark the permalink.