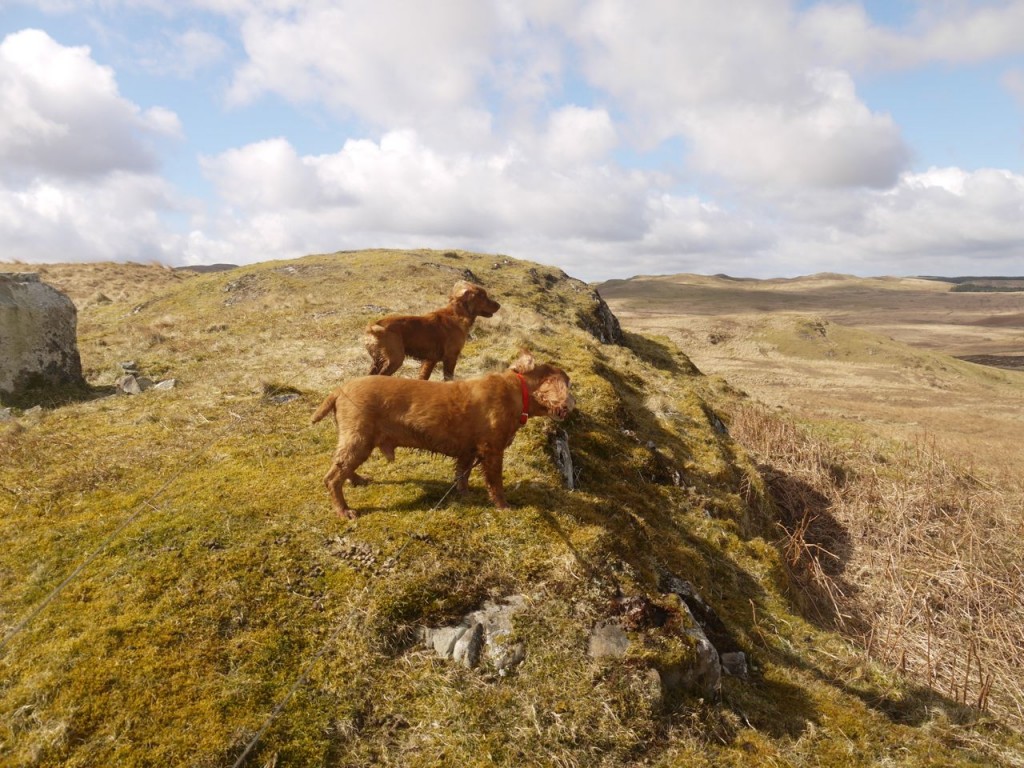 A shorter walk than I had planned since there were sheep aplenty on the hills and the dogs had to be kept on leads for much of the time. One dog on a lead I can cope with, two on easy ground, but two when I need to watch my footing was too much, so the Big Hill of Glenmount was struck from the itinerary.

I had planned to walk up over the hills then back along Ness Glen but as I was setting off a young chap out walking his dog asked where I was going and suggested I walk it in the other direction. He pointed out that the great views of the loch and hills beyond would be at my back if I walked as planned, but would be in front of me if I walked the other way. Excellent advice, anticlockwise it was. 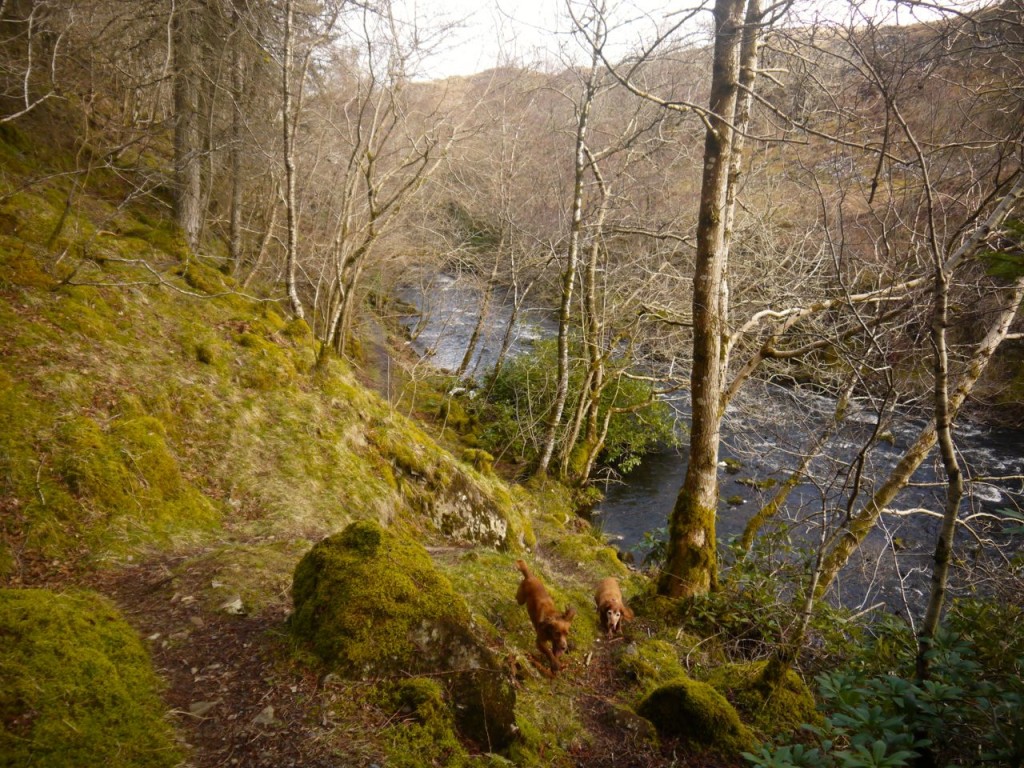 The River Doon drops 130 feet in a little under a mile along the Ness Glen, its water cascading over rocks at the bottom of a steep gorge, 200 feet deep in places. A walkway was built along the bottom of the gorge in Victorian times had fallen into disrepair but has been renovated in recent years.

The walkway begins as a typical woodland walk but once in the gorge is narrow and in places slippery especially where the walk is over bare rock. Some sections look as though they might be underwater when the river is in spate but were dry for me. Where there is only vertical rock above the river there are wooden bridges. I didn’t count them but read there are 22. 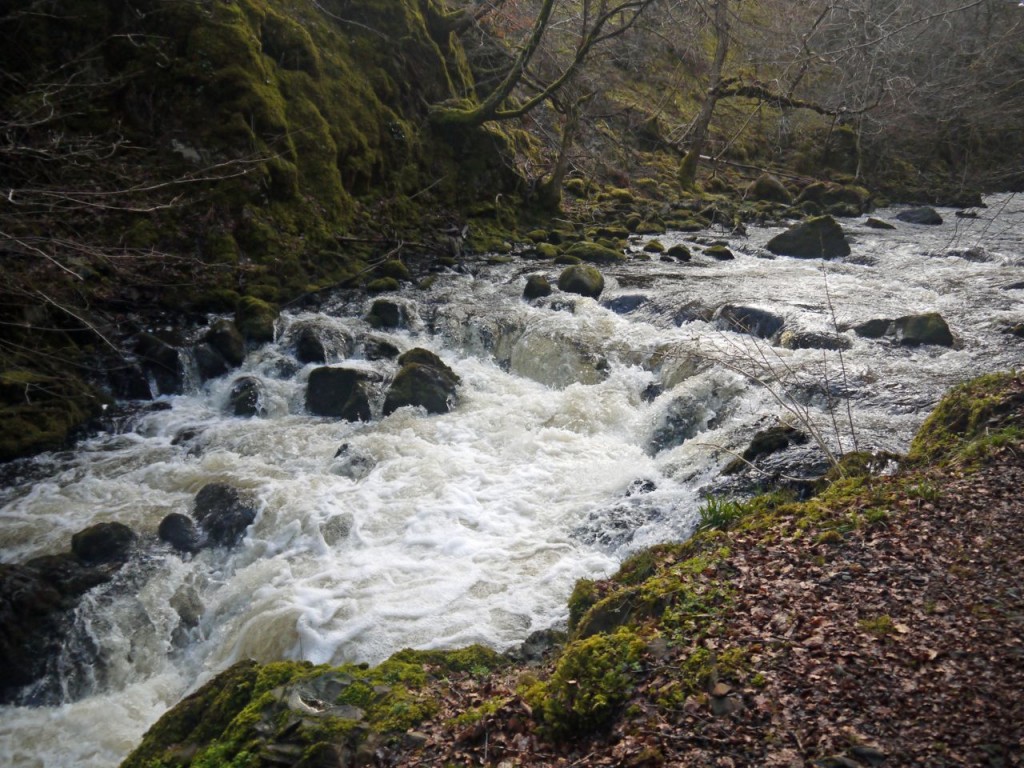 The dogs as ever wanted to get into the water, which was no problem where the river was black but I had to call them back when they were nosing towards white water. Birds chittered above us which had Eddie trying to run up the moss covered near-vertical rock walls of the gorge. Its surprising how far he can get before gravity wins out over momentum and friction.

There were several large tree trunks must have fallen from higher up and now lay across the river and footpath . They were easy enough to climb through and did add to the experience. Ideal for re-enacting scenes from Robin Hood I would think. But those wishing to reach the other side without a fight need only show patience. 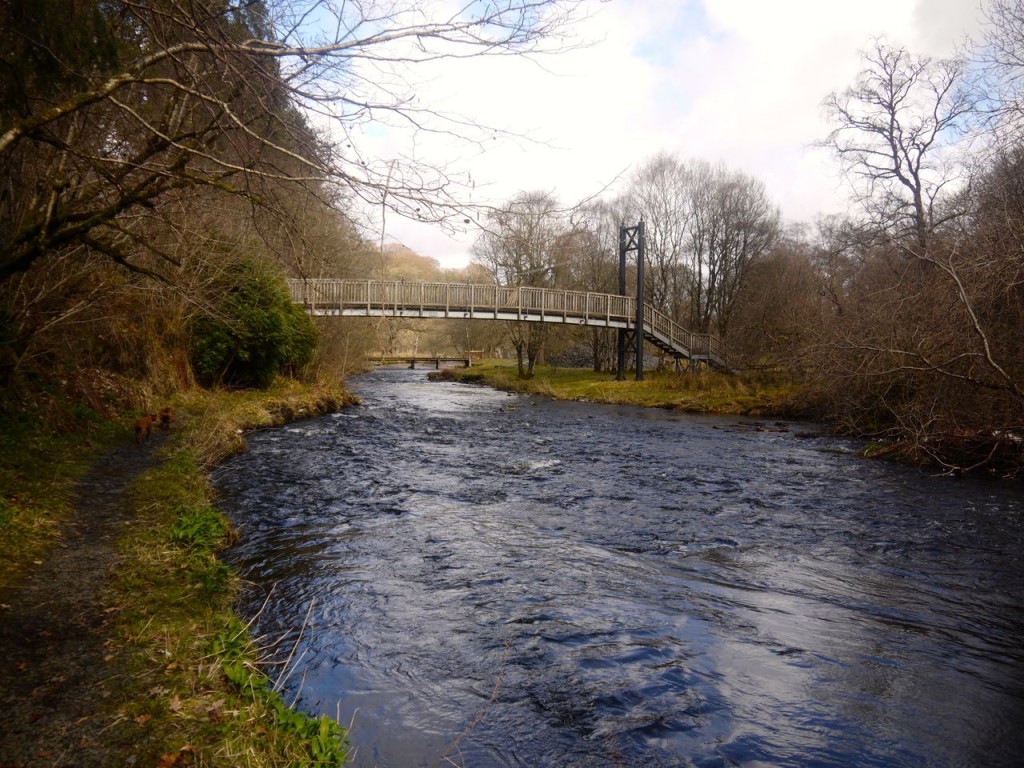 Where the gorge ends is a footbridge and then a vehicle bridge and I imagine one could cross here and continue along the river up to Bogton Loch. I stayed on the western side of the river and turned left along the vehicle track. A group of horses watched impassively as we passed their paddock, the dogs not knowing what to make of them but sniffing by the fence. 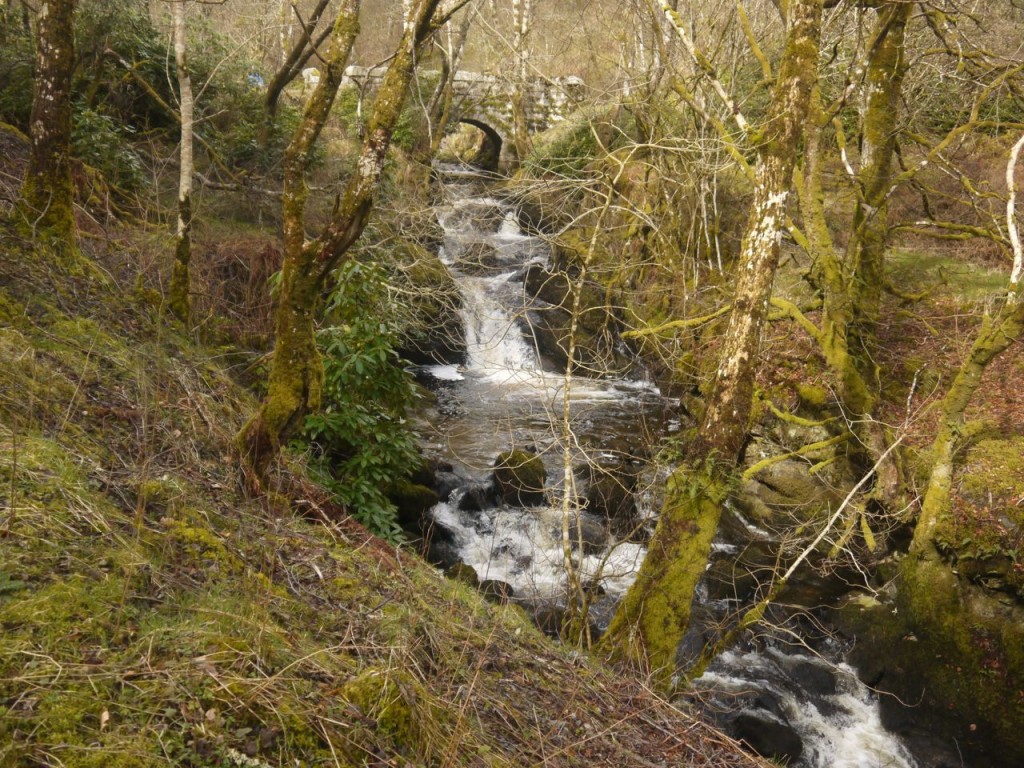 The track ran alongside the Glessel Burn so we still had running water as a soundtrack for our walk and the burn had its own cascades of white water. At a bridge over the the burn we were faced by a trivium. One road crossing the bridge, one continuing on and one heading off to the left uphill. A sign lying by the the bridge had an arrow and the letters “SDOS” (Scottish Dark Sky Observatory). That was the direction I wanted to go but which way would it have pointed when it was upright? It could have been straight on or to the left. I went left.

The track climbed through trees then met a tall (deer) fence and a tall padlocked gate. Here my canine troubles began. Sweep scrabbled under the fence and took off out of sight, then Eddie took off along the fence in the same general direction. The pup came back when called and was put on his lead, but the old boy was slower to return.

The gate had a big sign for the SDOS, and a warning about the track’s roughness.  Any damage sustained by cars would apparently be the driver’s fault. A rusted chain and padlock held the gate shut but circumventing the gate would have been easy enough. The more amply proportioned dog had shown he could squeeze under the wooden fence beside the gate and I could easily climb the wooden section. Doing this with two dogs held on leads though was a challenge and of course the ground immediately by the climbable section was muddy. I know it sounds easy but it was tricky, the dogs tangling their leads and pulling at me while I tried to climb. In the end I had to tie them to the fence, get over then untangle them again and get them across one at a time. I didn’t know what they had taken off after in the woods (a deer a presume) but I wasn’t going to let them free until we were a little way further along. 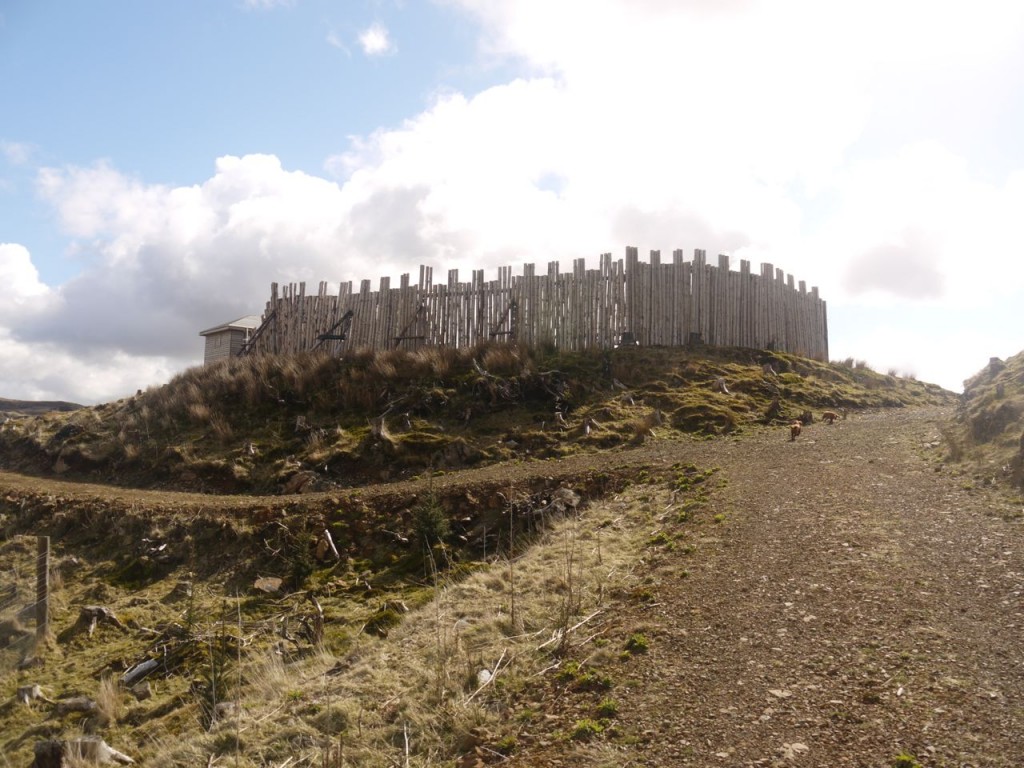 Away from the trees and round a corner from the unwelcoming gate, Fort Carrick came into view and I let the dogs roam free again. We walked around the fort but could not go in since the gates were shut. The fort has stood on this hillock since 2010. Yes, a whole five years. It is supposed to be based on an 18th century fort design and is actually part of a nearby activity centre. From a distance with the sun in one’s eyes, it looks like the kind of fort one would expect the US cavalry to be defending against the Apaches in films with John Wayne. 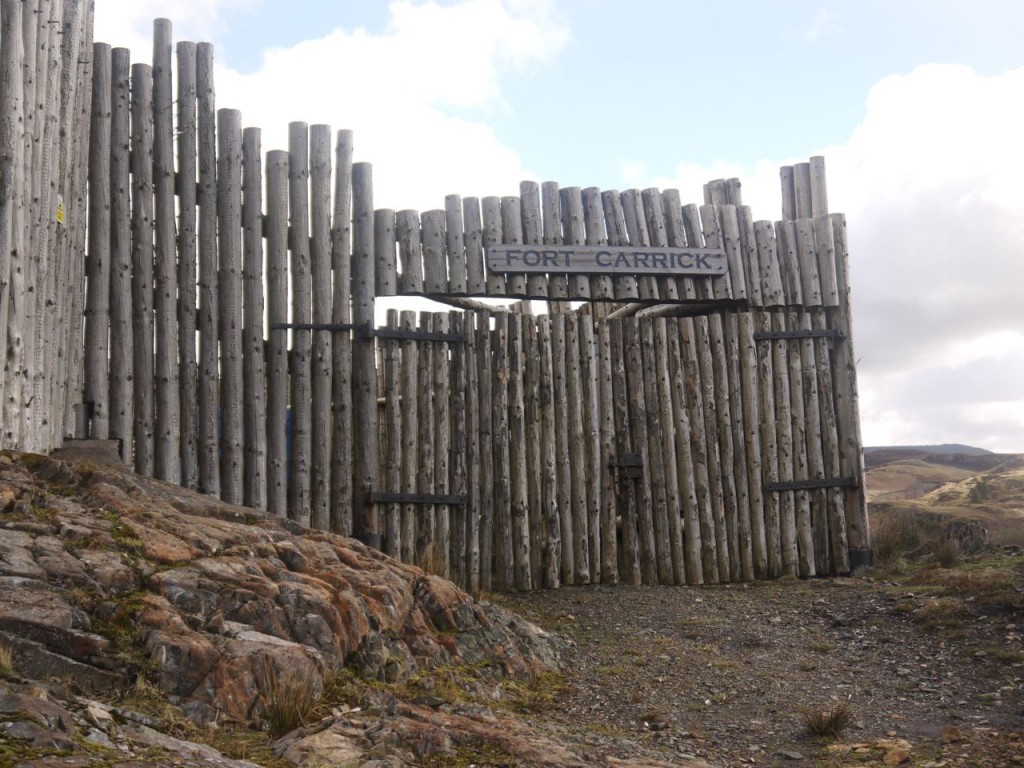 As we approached the fort we could see the Observatory just a short distance away. We climbed over a rocky knoll to get there to reach a gate in the drystone wall that would allow us out on to to hillside.

Unfortunately beyond the gate was not only hillside but sheep including a dead one on its back about 50m beyond the gate. So the dogs couldn’t be allowed through untethered. And then began the unpleasant part of the walk with a dog lead held in each hand, dogs unable to decide which side of me they wished to walk and me trying to tread carefully to avoid slippery moss covered rocks on the knolls and boggy sections in the dips. Every time I thought we were away from sheep we would see some more and have to take a detour to give them a wide berth.

I looked across at the Big Hill of Glenmount and knew walking across there like this would be unpleasant, so we headed for Glessel Hill and back to the car at Loch Doon. 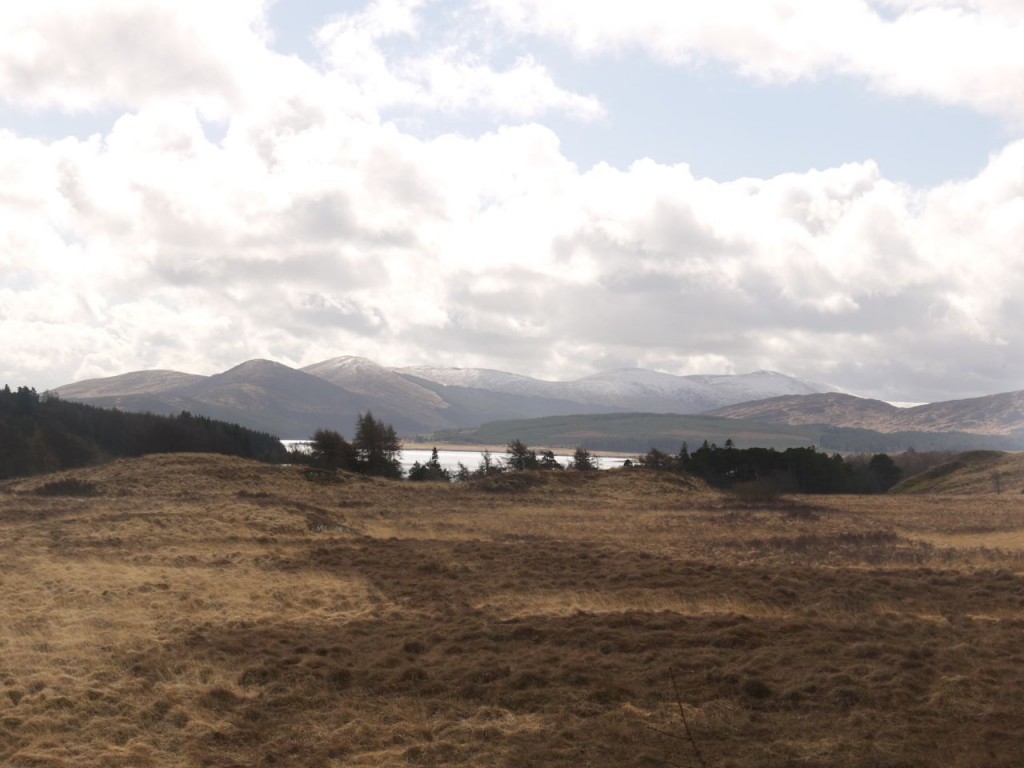 There were nice views of the hills of the Rhinns of Kells and the Awful Hand, all topped in snow, and Loch Doon itself, but it is difficult taking photos holding dog leads. I’ll leave the Glenmount Hills for another day but I am also tempted to follow the riverside walk further.

Share this...
This entry was posted in Ayrshire and tagged Low Level. Bookmark the permalink.