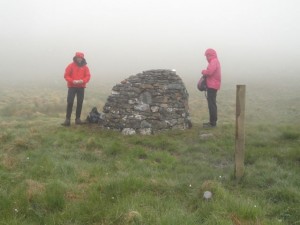 Bad weather was forecast but we were lucky in that we had drizzle rather than heavy rain. Unfortunately the wet ground and wet air uncovered footwear gore-tex failure for David and myself.

This was our first go at the Annandale way and proved to be a good challenging walk. Shame that we did not have much in the way of views. But there is a silver lining in every cloud: it was a good excuse not to extend the trek to Hart Fell. Why walk up there if we can’t experience the view? Truth be told I was already decided against it having heard the tales of extra steep slopes and path-less descents. And I made the right decision, because I was ready to fall asleep when we got back to Moffat.

Our first sighting of an Annandale way sign was at the turn off to Meikleholmside. This led us off onto the open hillside and continued drizzle. The road out of Moffat is the old Edinburgh Road and having seen it I realise how hardy travellers were in those days. There was a steady and relatively easy climb through sheep and lamb filled fields up to the Beef Tub road.

At the A701 we briefly joined a track which was once, apparently, a Roman road, but soon deteriorated into a pathless jaunt through thigh-high wet undergrowth. Here we passed the Moffat MRT’s Beef Tub walkers going in the opposite direction which gave us some confidence that we were on the right track. This section could have done with a way marker.

Soon we were heading down towards the Beef Tub which was filled with mist. The gallery has a picture of David and me in which I somehow look drenched but he doesn’t. A trick of the light perhaps?

Here I shared my (very limited) knowledge of sheep-farming with David, who was not impressed. I recall as we were walking that he did the same on another subject and I made a mental note to write that in….but I’ve forgotten what it was. (message to Elaine: Dermot, yes I see what you mean). Another enigma: why did the driver who passed us on the A701 wave and smile at us?

At this point I thought we had reached the highest point and it would all be downhill, but I was to be disappointed. We had to climb to the trig on Annanhead Hill and then Chalk Rig Edge. All done in mist. Another place that could do with a way marker was the gully between Annanhead Hill and Great Hill. Here there is a definite path heading south down the valley and a less distinct path which we, correctly, took.

Eventually we came upon the Cairn marking the northern extent of the Annandale way. It is a good job we had the visibility we did because it was away from the wall we were following by 20m or so, and we might have missed it had we not paused after hearing a voice in the mist, which was a farmer talking to his dog.

The cairn is shaped like a cartoon whale and sits above the source of the River Annan. I presume the shape is meant to be something else but I can’t work it out. What it does not have is anywhere to sit or shelter from the elements. As I crouched to avoid the worse of the drizzle while eating my sandwich next to a pool of water with sheep faeces I wondered if there should be a real tourist board. They would describe Scotland as it is most of the time rather than just five days a year. “Walk in all types of weather on the same day! Tramp through boggy soft land with wet feet, while sweating inside your waterproofs! Climb hills without having to waste time looking at the views!”

At this point I drank the magic elixir (coffee) and ate of the enchanted food (corned beef butty) and like Popeye I grew new muscles and gained more power. Or perhaps it seemed that way because we were going downhill.

As we walked down into the valley the mist cleared. Our brief look up the Beef Tub showed that it was still filled with mist. Is that common, I wonder. Did it contribute to its usefulness for cattle stealers?

We crossed the River Annan on a wee bridge and began the long walk back to Moffat. At this point we had 4.5 miles to go which was considerably more than I thought. I was still thinking we were making excellent time.

Our route took us past the Moffat Water Community Centre which gave off a strong smell of beefburger, which would have been our prize had we been on the organised walk. Also several large houses and cars which apparently would be the abodes and rides of doctors.

Eventually we reached Moffat and were able to change into dry footwear. Then on to the tea shop where the Wylie’s gave away their true nature (I was shocked to find that they are in fact posh).

Share this...
This entry was posted in Dumfries & Galloway and tagged Annandale Way, Paths. Bookmark the permalink.