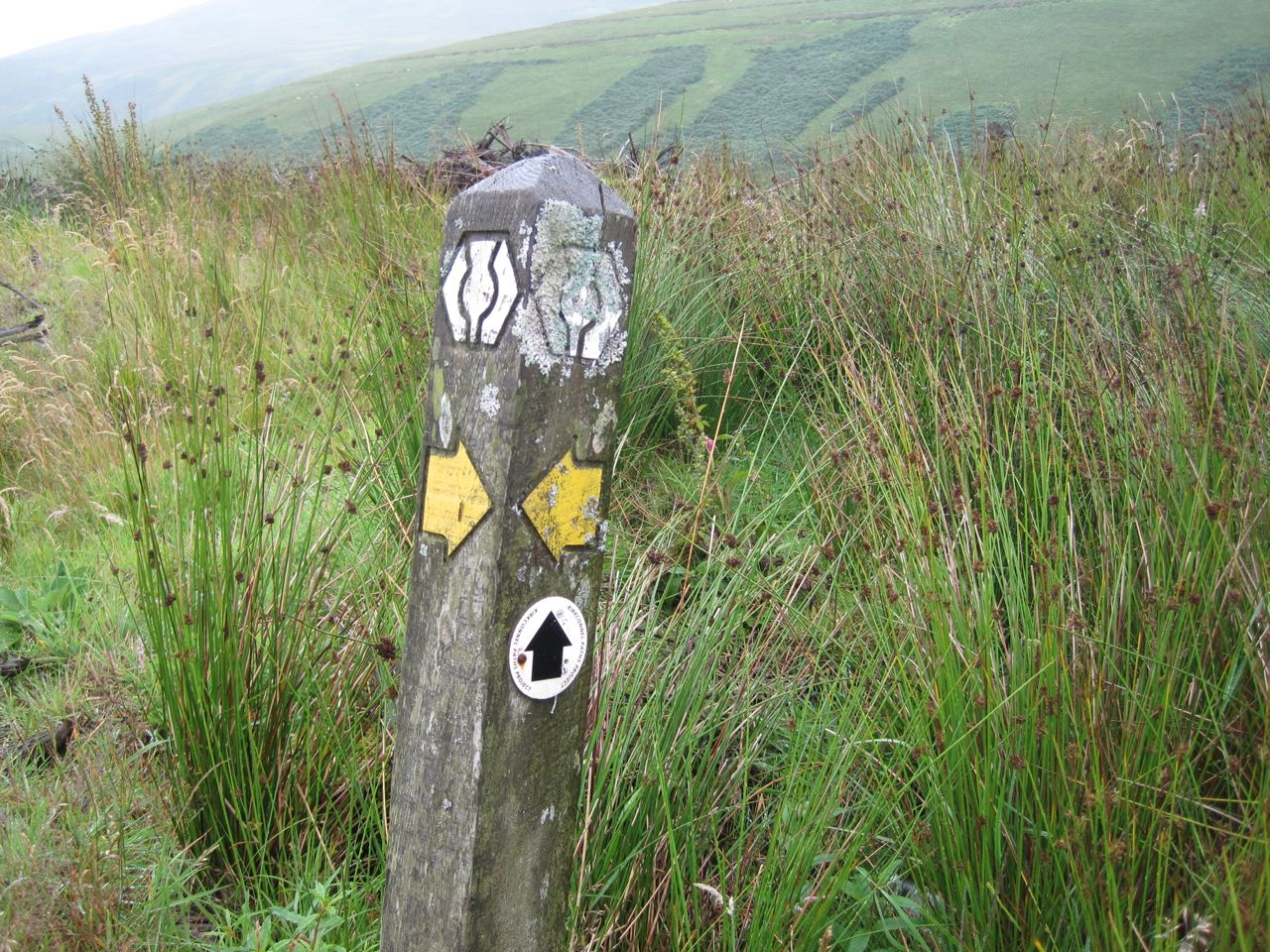 Between Cogshead and Wanlock Water the SUW offers two routes, and when we last came this way in October, walking from Sanquhar to Wanlockhead, we took the route over Glengaber Hill, which is shorter. Having completed the SUW coast to coast I felt drawn to walk the alternative routes as well for completeness. The weather forecast was an amber warning for heavy rain all day, so we had a day in waterproofs. It certainly proved to be a wet day, but sometimes it was only light drizzle.

I presume this longer northern route exists to provide an alternative way across the hills if there is grouse shooting on Glengaber Hill. Descriptions I’ve read don’t exactly sell the Duntercleuch route, suggesting it is a boring trek along forest tracks with nothing to see but trees. And to be honest, there isn’t much evidence at Cogshead that the Duntercleuch route even exists. The SUW signpost at Cogshead only points towards the Glengaber route and gives no clue that there is a second route.

Cogshead is a bit isolated and getting to it offers limited options: The Glengaber SUW route from Wanlockhead, Stood Hill from Wanlockhead, the SUW from Sanquhar, or Nether Cog to Cogshead. Rather than walk routes I had used before I thought I would try something different, so we set off from the minor road near Nether Cog. A small bridge took us over Crawick Water then we followed a farm track that zig-zags up the steeper slopes of the hill. This gave us some views up the Crawick Valley albeit limited by the rain. On the flatter section we were faced with a junction. The main track continued on and another track went off to the left. A weathered signpost indicated that the onward track led to Sanquhar but the other part of the signpost was partially obscured by moss. With a little effort though we could make out “Cogshead 6km”. So that was our route.

This track led into the trees and then wound around the slopes of The Dod, steadily climbing until the cleuch of Glendorch Burn on Conrig Hill. The experience here is of walking uphill hoping each time we approached a bend in the track that we would find the climb was over. 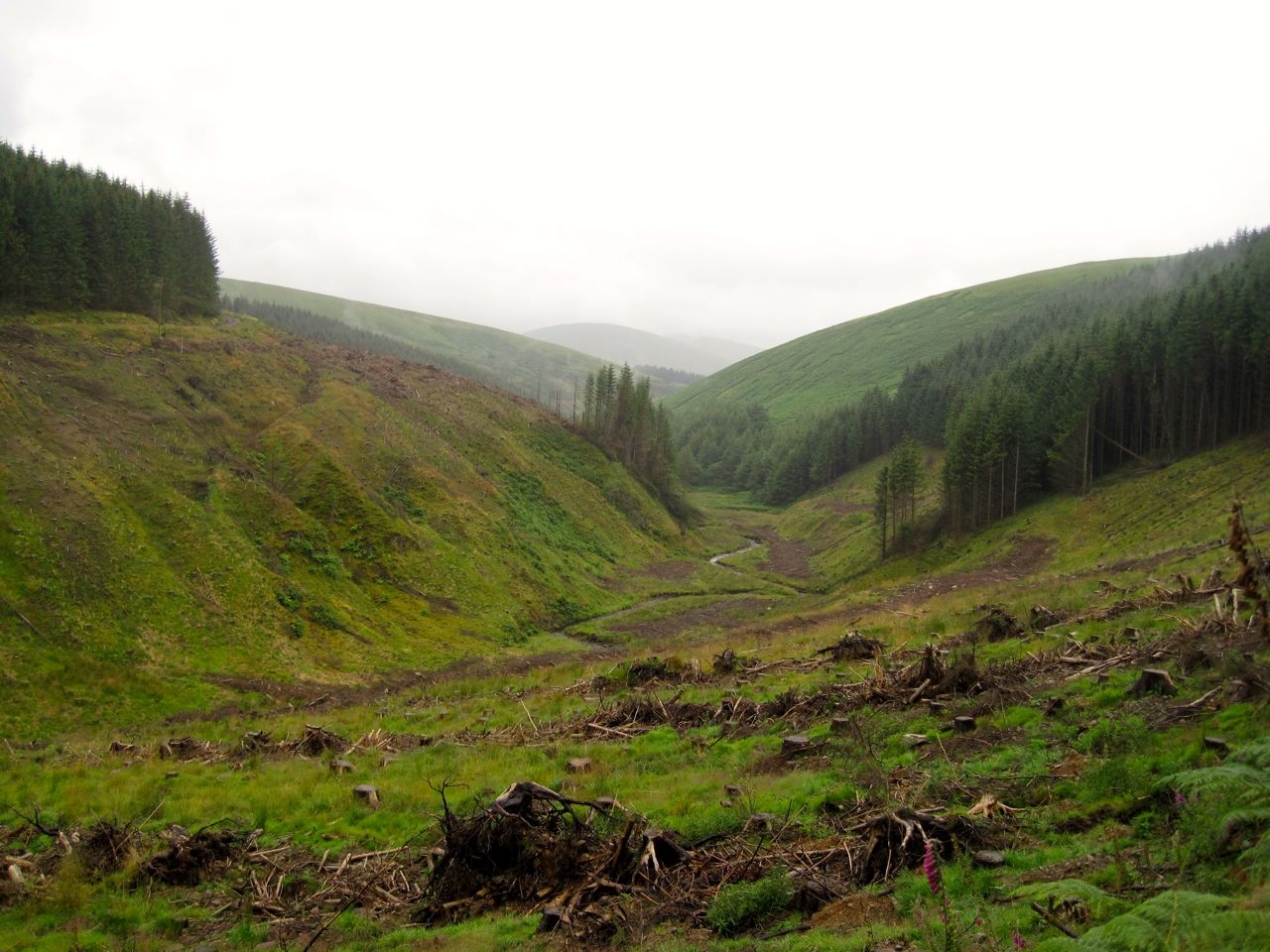 From the track above Cogshead we could look down on the ruins of Cogshead, the SUW signpost and the rather unusual grassy hillock. Is it a hillock or is it a saddle? Who knows. From this point I stepped up my level of alertness. We had missed one of the SUW’s hidden kists back in November and this was a second chance to find it. We found the Ultreia marker post and knew the secret horde to be somewhere nearby.

The trees beside the path had been felled in the last few seasons and I thought that if the kist had been among the trees it would now be lost. But I kept my eyes peeled for the unusual and spotted something unnatural, the kist. I scrambled to it, pulled it open and retrieved my treasure, a bright coin with a pine cone emblem. I can see how easy it would be to overlook it. 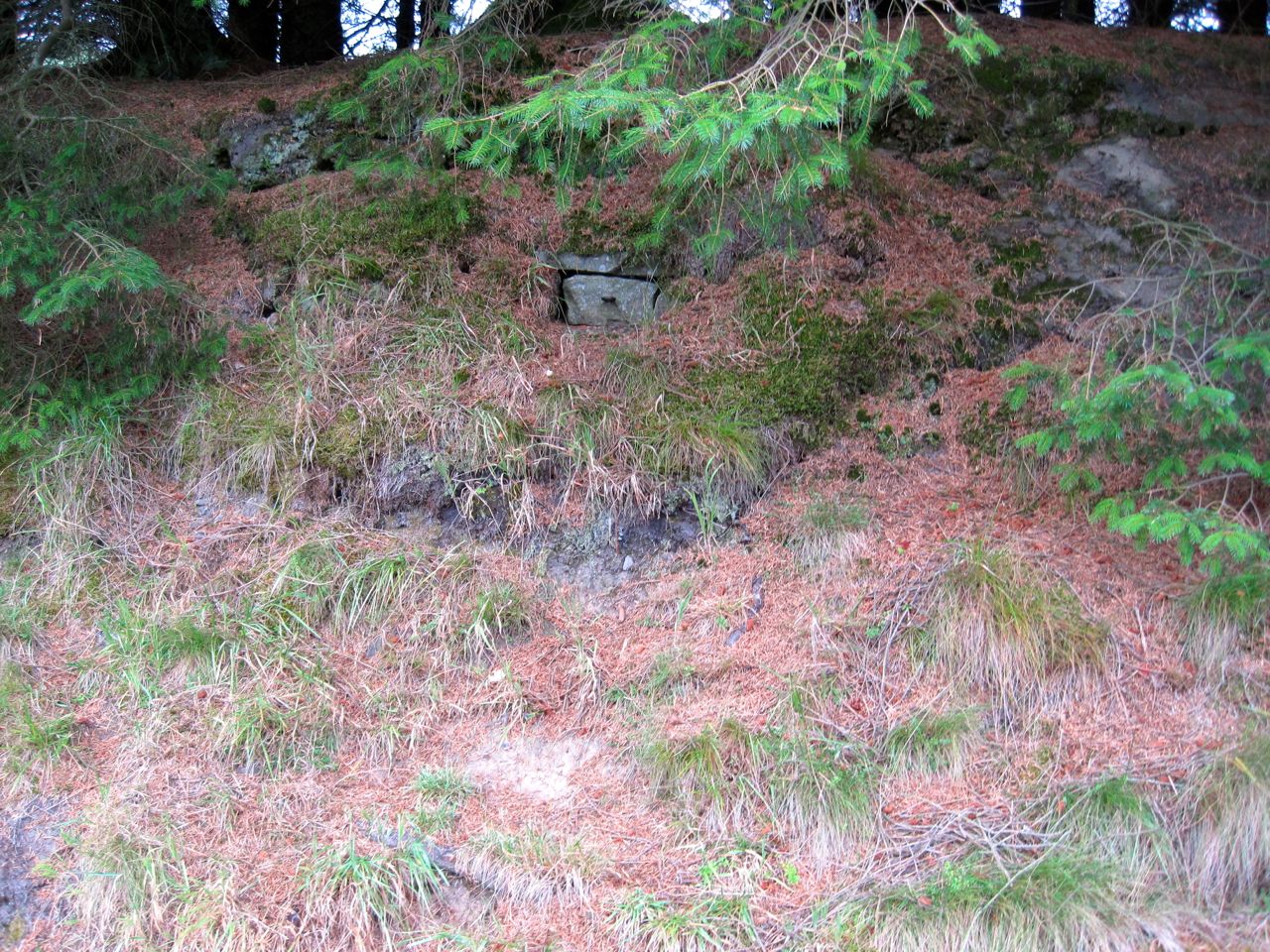 Now we were back on the SUW and ready to take the alternate route. I had a recollection that the signpost at Cogshead had pointed to both routes when I was there in 2012, but I have since dug out the photos and I was mistaken. The photos do show though that the weather deteriorates with each of my visits to Cogshead.

The track from Cogshead wasn’t the boring forest trek I had been expecting. There has been tree felling but long enough ago that the desolation of the felled forest has been replaced by regenerated growth, heather with its purple flowers, bracken with green and yellow fronds and bright green saplings. And there were open views across the northern reaches of the Lowther Hills. 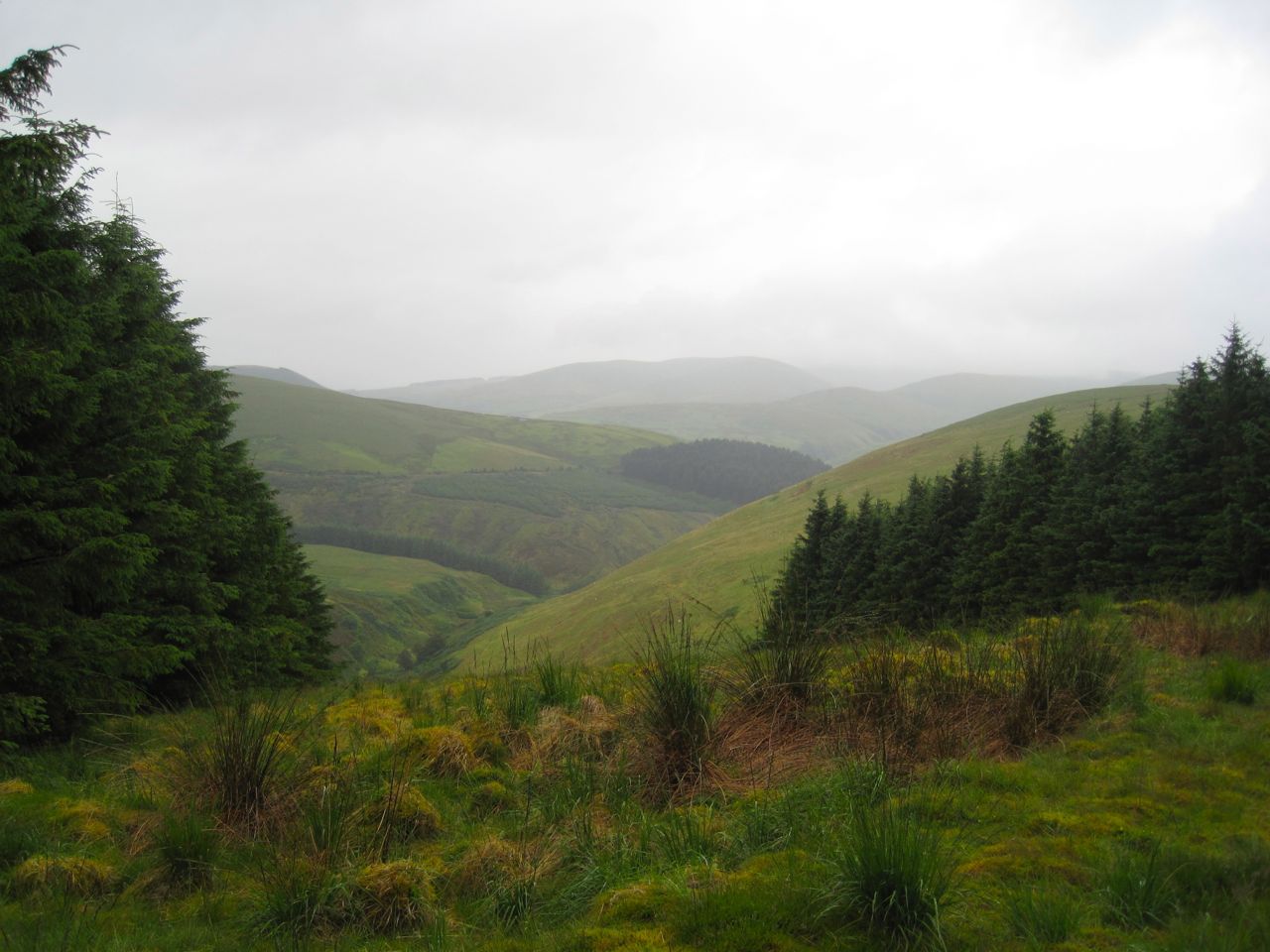 I began to wonder if the SUW still considered this trail part of the official Way. We saw no SUW marker posts and there were no stiles or SUW kissing gates, so we had to use the normal gates which though not unheard of is unusual on the SUW. After about 2.5 miles of this forgotten route we reached a T-junction. Just a little while before this I had commented to Audrey that I wasn’t sure what direction the track was heading, having followed a wriggling route for over an hour. My compass was tucked away with the map in my rucksack, sheltering from the rain.

I wasn’t expecting the T-junction and having lost all sense of direction I realised I would need to get the navigation gear out. But then we noticed the SUW marker post with a bright yellow arrow instructing us to turn right. So the SUW hadn’t forgotten this route after all.

The marker post also had a Kirkconnel Paths Project disc, so we were joining the Kirkconnel Geology Trail. So we turned right and continued on our way. After another couple of dips and climbs we were looking down into the valley of Wanlock Water. A cairn above Duntercleuch, associated with the geology trail, informed us we were 14.4 miles from Kirkconnel and 2.8 miles from Wanlockhead. From there it was a welcome downhill stroll to the river. 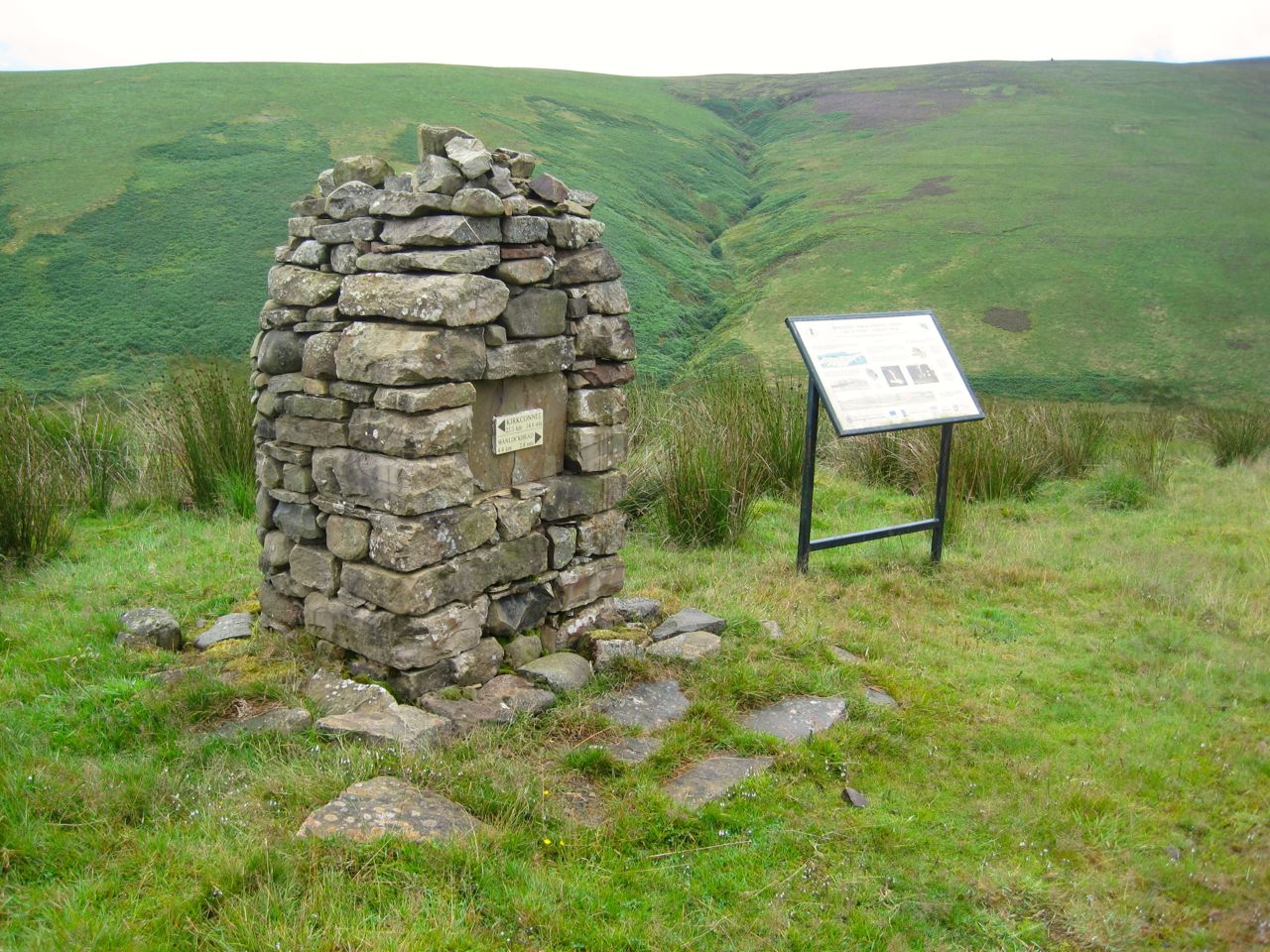 From a distance Duntercleuch looked inhabited but close up it was in serious disrepair, especially the roof, and not fit for habitation. A small weather station stood on the hill nearby. 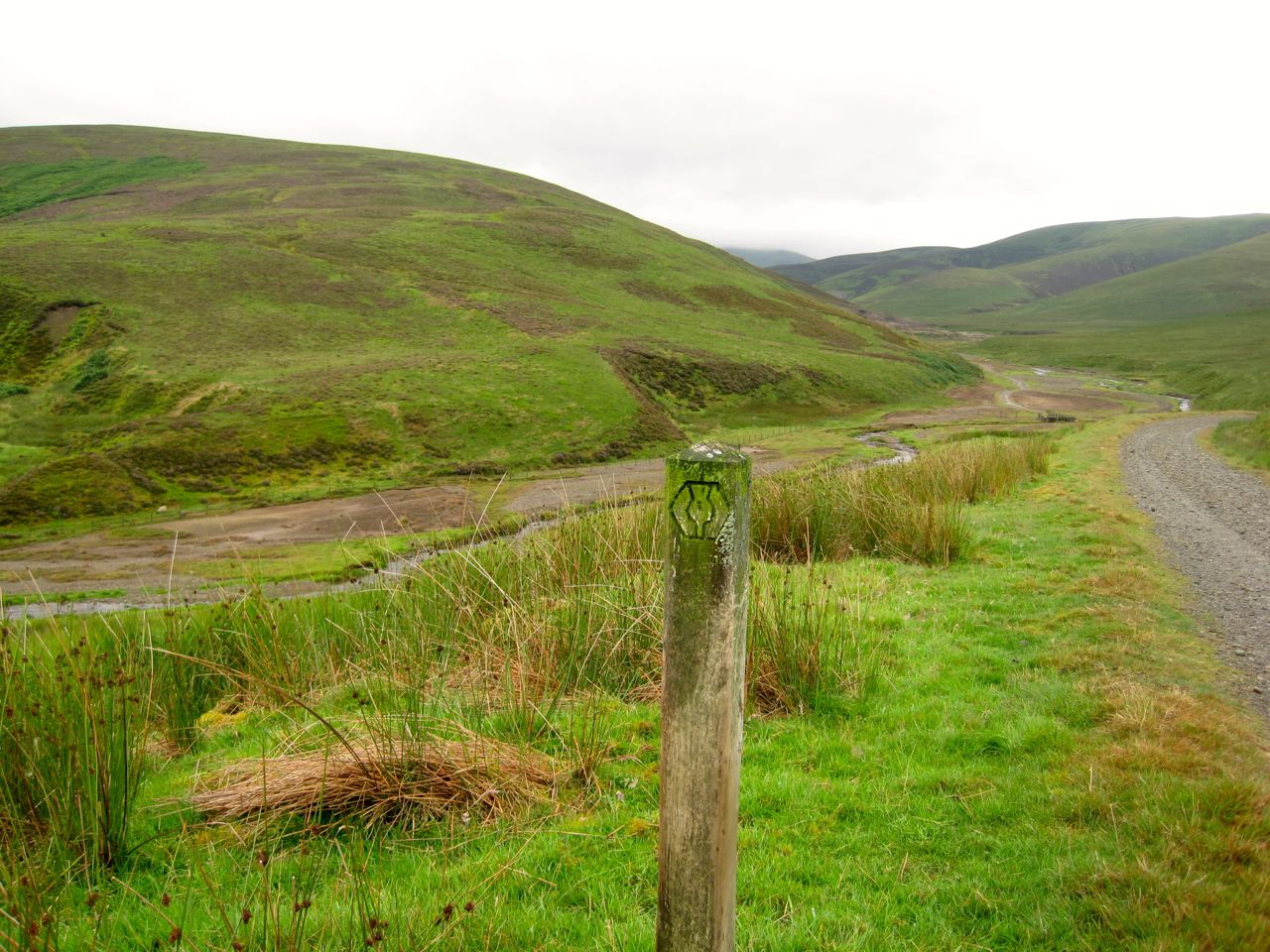 At Wanlock Water we had a choice, a bridge or a ford. I chose the bridge after stamping on it to test its firmness. The ford though would be easy to cross with dry feet (in waterproof boots). We then walked along the track, passed the point where the other SUW route rejoined us. The rain became heavier so we pressed on past the lead mining ruins of Sowen Dod, the ruined smelting works and the Beam Engine, into Wanlockhead.  We spotted a heron flying along the river but too far away for photos. 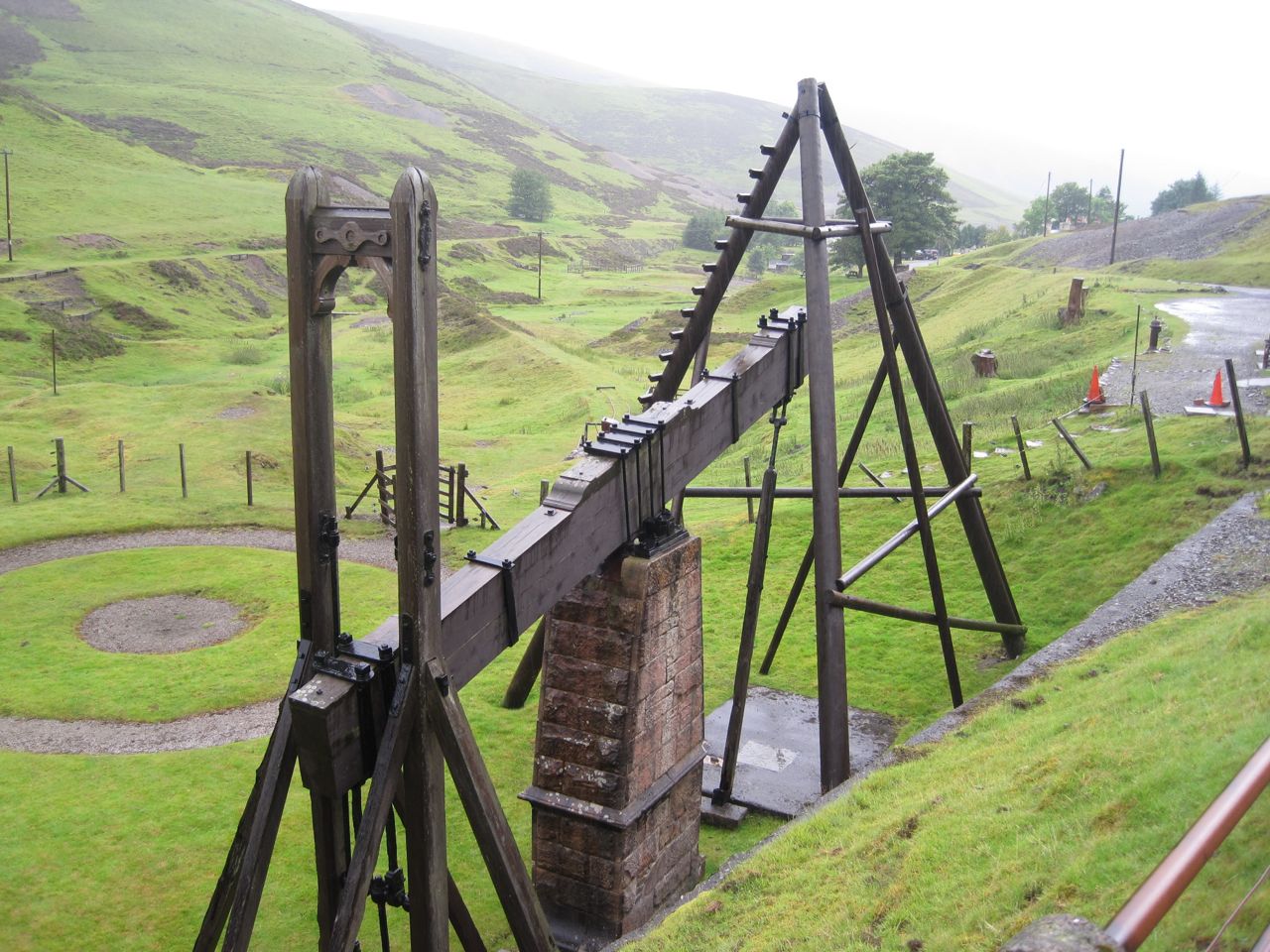 I’ve walked this last section a couple of times before and always thought of it as flat. It was obviously uphill this time. Perhaps in nice weather I didn’t notice the gradient? At least the Visitors Centre gave me a dry place to get changed.

So that’s another 4.8 miles of SUW done.


© OpenStreetMap contributors
Share this...
This entry was posted in Dumfries & Galloway and tagged SUW. Bookmark the permalink.